We’re in Cabo San Lucas, our final destination in Baja California.  We’ve ridden 1600 km over 16 cycling days in desert landscapes, through cactus forests, and along breath-taking winding mountainous coastal roads. We camped on the beach, in gravel lots of roadside restaurants, and once in a village church yard. Facilities were often basic, toilets with buckets of water to flush and makeshift showers.

There were dogs everywhere. Sometimes they came barking after us, but often it was too hot even for a cursory yelp. Everywhere there were reminders of death on the road: shrines dotted the roadside, most small, some as large as small chapels, many adorned with fresh flowers. 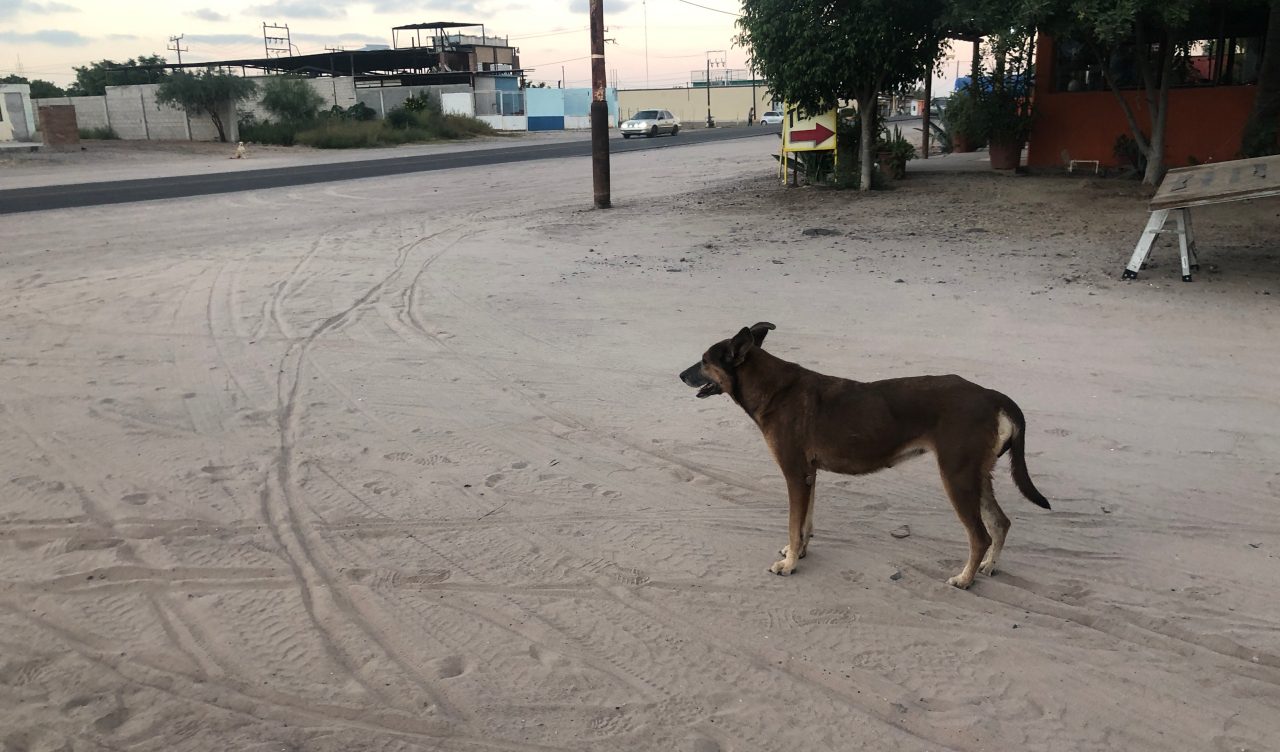 Our first rest day stop was at San Felipe, a ride of 145 km. We had anticipated a relatively uneventful day along mildly undulating terrain. It proved otherwise as a southerly breeze in the early morning morphed within a couple of hours into a bear of a head wind. I cycled with Mike, the organic kiwi farmer from New Zealand. 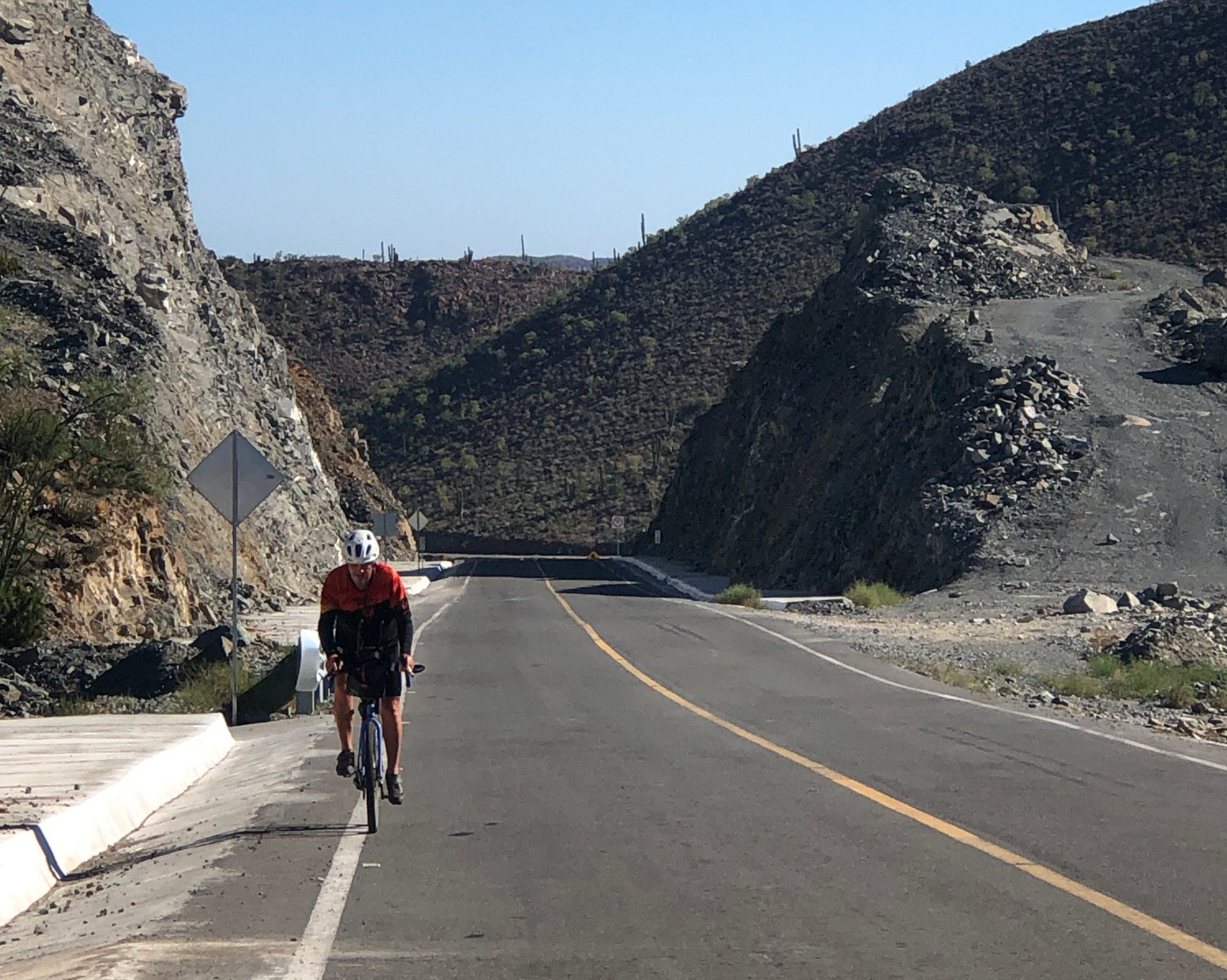 Mike is a large charismatic fellow with an easy laugh and a passion for his fruit and sustainable farming. He wants his small-scale family farm to continue to yield fruit and profits for generations to come. He’s hard-headed, pragmatic and idealistic. His concern is marrying stewardship of the land with financial viability. He seems to be succeeding. His daughter and her husband are now running the orchard. His succession planning and small-scale farm management may prove to be model for many others. He’s also an ideal cycling partner, steady, reliable and a clear communicator. We had a tough day but a good one drafting together seamlessly over the long distance.

San Felipe is a ramshackle beach resort town. Concrete shells like a parody of ancient ruins dotted the streets. Military pickups with half-a-dozen heavily armed men patrolled the streets.  What or whom were they protecting? Soon enough it became evident they were a constant presence in all the towns we passed through. I never became habituated to the sight. When they roared past I inevitably flinched inwardly as if I had stumbled into an uneasy no man’s land. 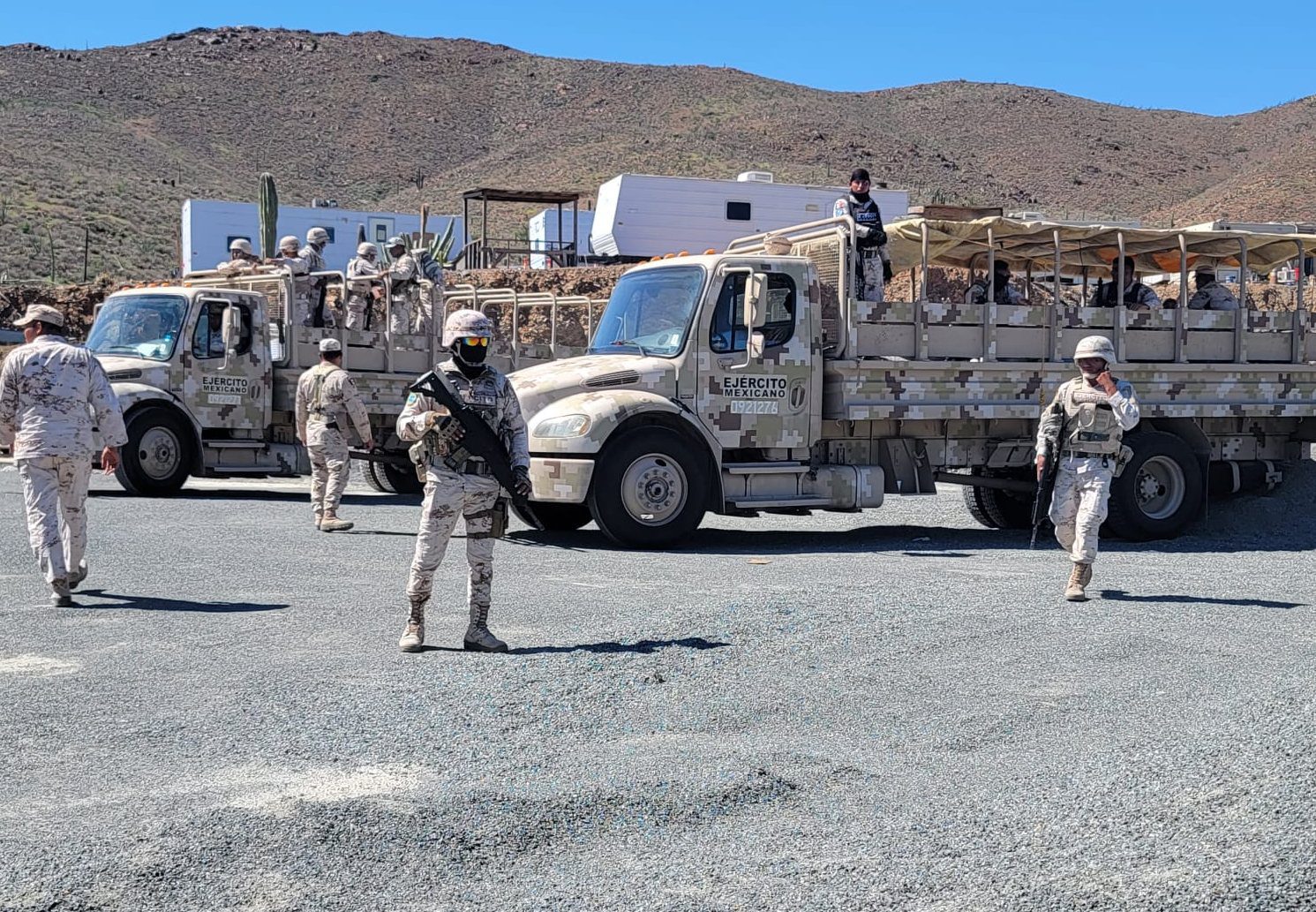 Our rest-day hotel in San Felipe was a two-storey pink building. Although one of the new developments along the beach front it has already seen better days. Or maybe not. What did we care? It was a break from camping with a real bed, a shower and a luxurious golden-white sand beach where we could dawdle in hammocks or plunge into the Sea of Cortez.

The next afternoon Francisco in a white shirt and a captain’s cap approached me. He invited us to share a meal that he was catering for his family. He was celebrating his 60th birthday. I wasn’t surprised at the invitation. By then already our limited experience of Baja was of friendliness and invitations.  Francisco was originally from Mexicali but has been living in San Diego for 34 years. He’s done well for himself in construction and comes south at least twice a year. His wife’s family are from the area.  We met his daughters and grandchildren and innumerable cousins. We feasted, wished him well and parted.

A few days later we pulled into Chapala at the intersection where Federal Highway 5, our route down the peninsula, merges into Federal Highway 1, the Carretera Peninsular, the main north-south route from Tijuana to Cabo. It’s a prime location for the heavy goods traffic that thunders down the road from the States. We’re camping here by the restaurant and shop, squeezing our tents wherever we can find a spot. 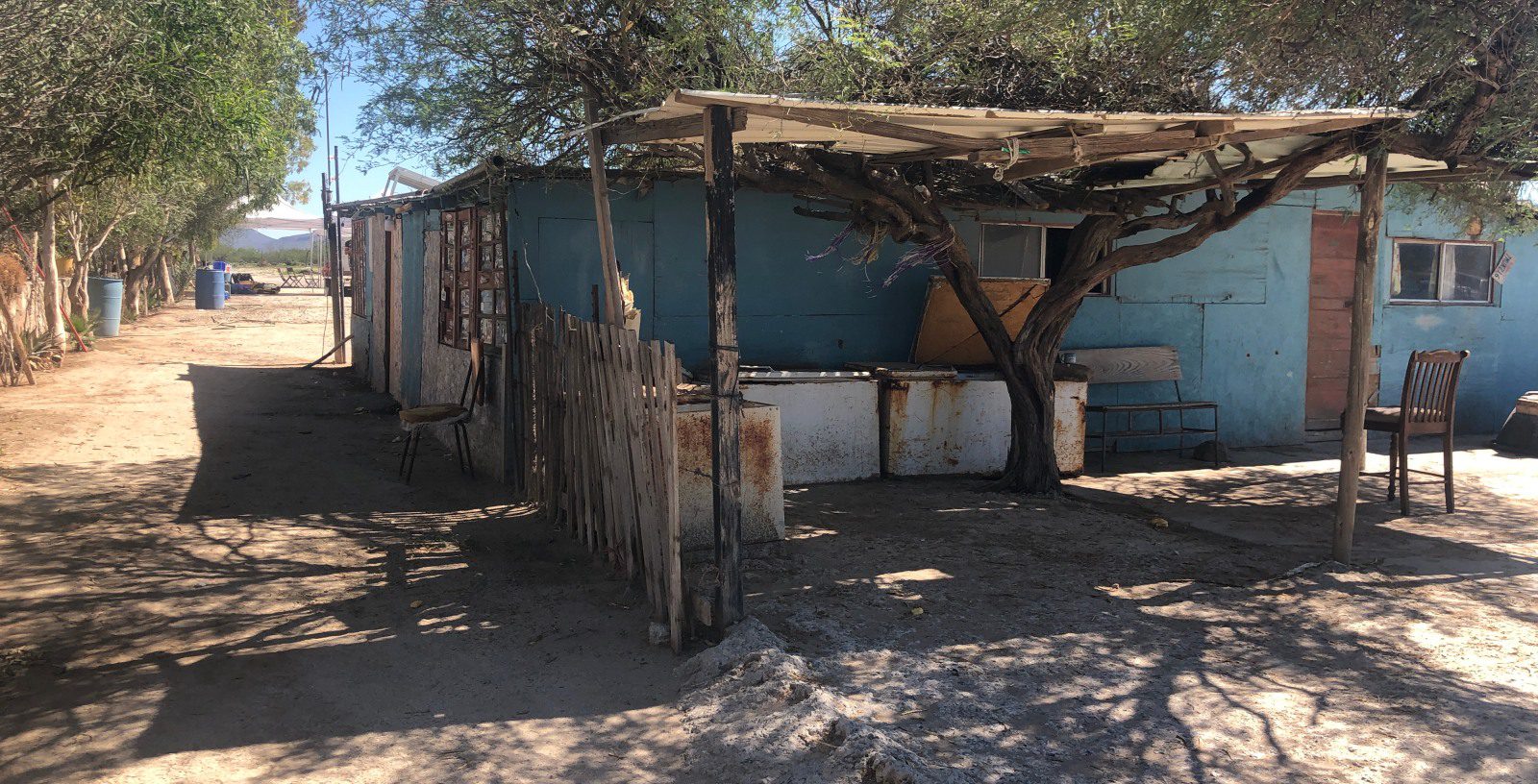 Eugenio is the owner. He’s in his sixties and he has a story to tell. His grandfather was an Italian who emigrated to Argentina and then onto Baja in the late 1880s. Eugenio’s father was born in 1892. In 1911 he joined Pancho Villa’s forces in the Mexican Revolution. Horrified by the war and bloodshed Eugenio Senior deserted and returned to Baja. He was lucky he wasn’t shot. Instead he was put in charge in building the precursor to Highway 1, which quickly became a vital artery connecting isolated communities in the south with the north. His father was 62 when Eugenio was born. 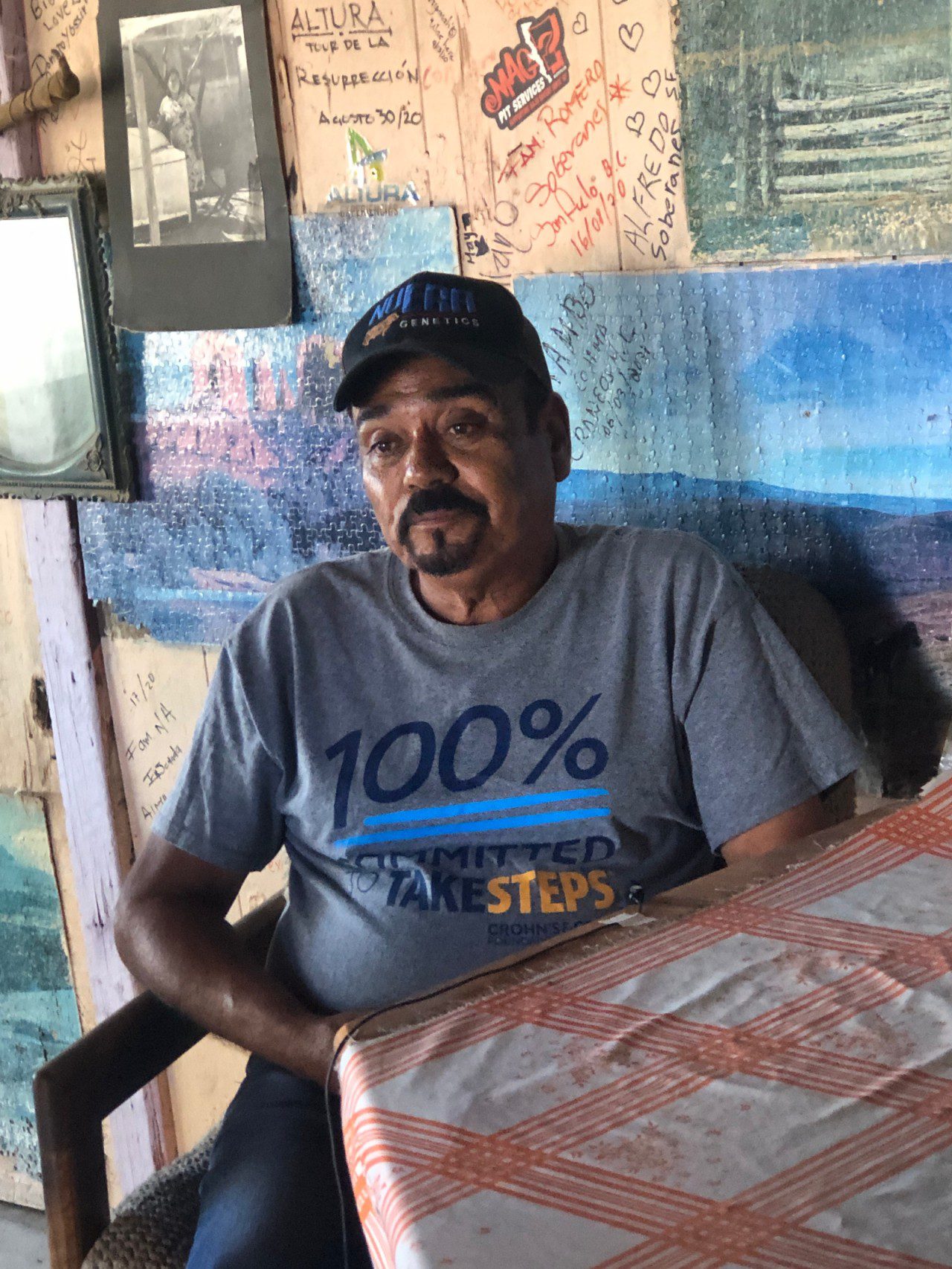 Eugenio is proud of his roots. His shop is threadbare–a dusty shelf or two of Mexican cookies and a handful of other commodities and a fridge stocked with Coke and beer—but it’s rich in the history of his family. The walls are covered with framed portraits of events and people of his past. To step into his dimly lit emporium is to walk into a living Mexican history. 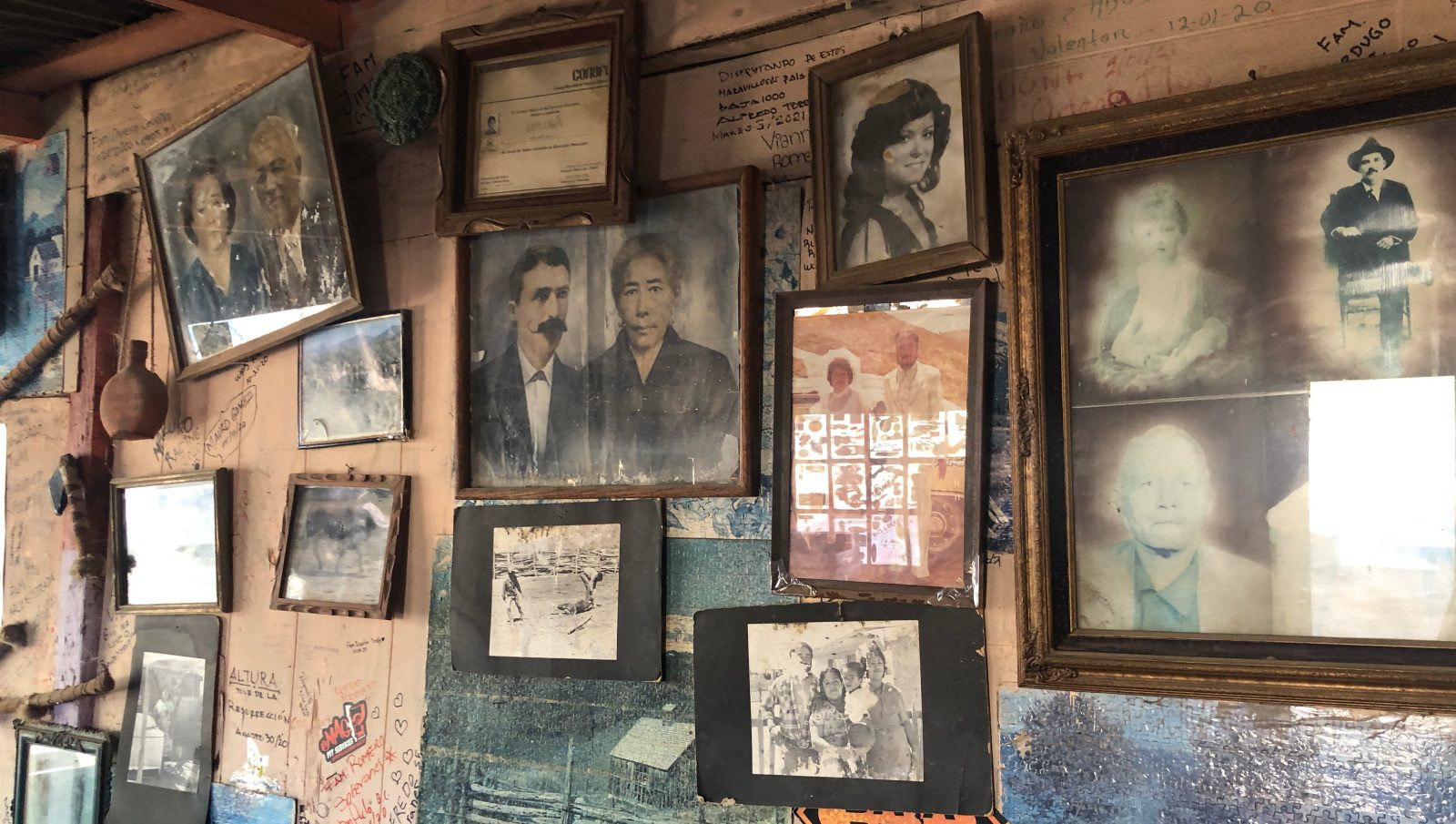 On we cycled towards another lonely way station, Mauricio’s Restaurant, where we would camp that night.  En route, at the top of a long descent we looked down at a bank of clouds that had settled on a saguaro cacti valley. For the next thirty kilometers we were enveloped in a thick fog, adding to the sense of mystery that unknown lands evoke in us. 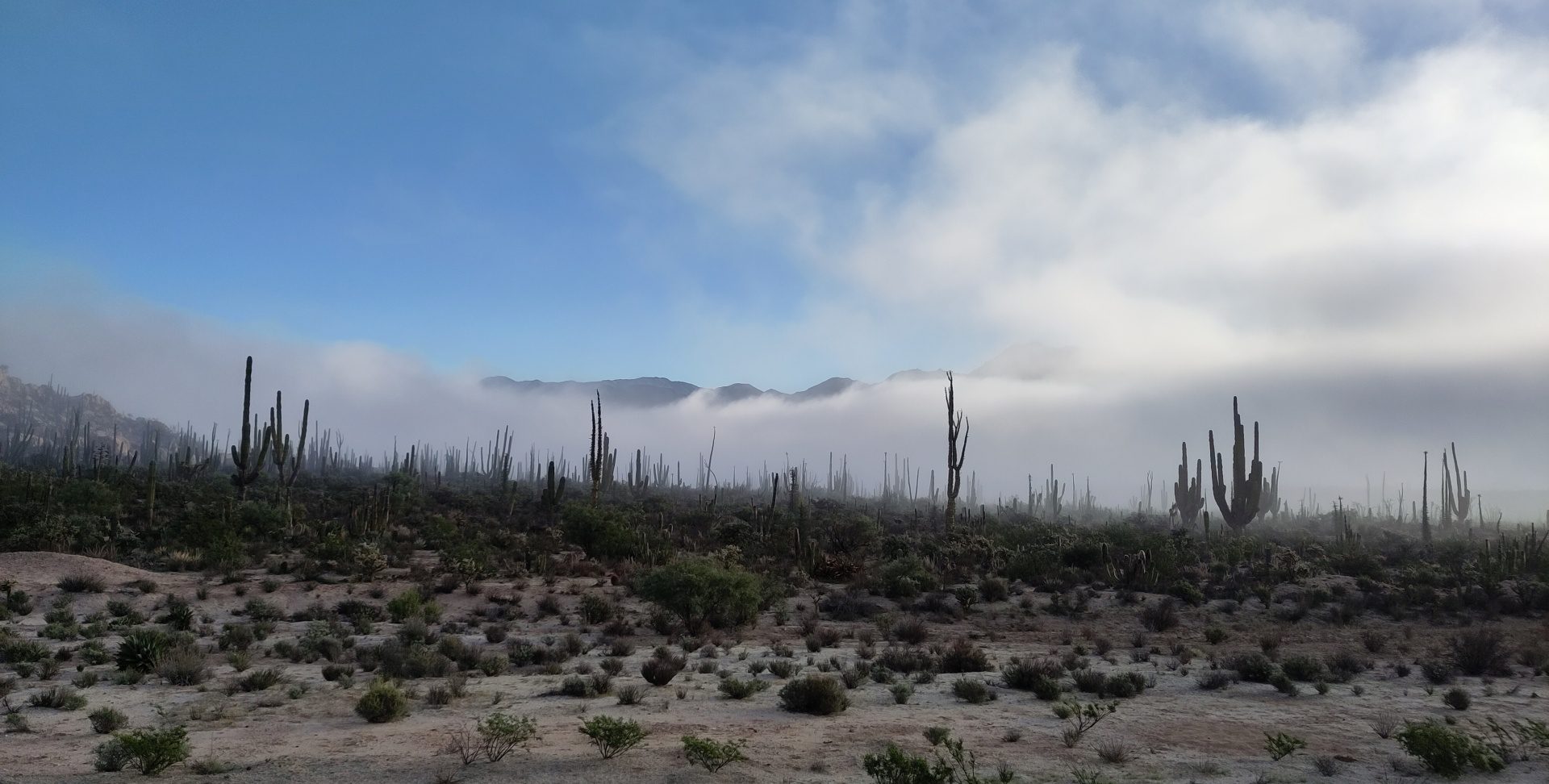 We spent a day in Guerrero Negro, established in the 1950s to exploit its massive salt flats, among the largest in the world. José took us on a tour. He’s a jack-of-all trades doing whatever it takes to make a living. When he was young he worked at the mines for a couple of years, a much coveted position for the benefits it provides: medical care, housing, deep discounts in the company store. 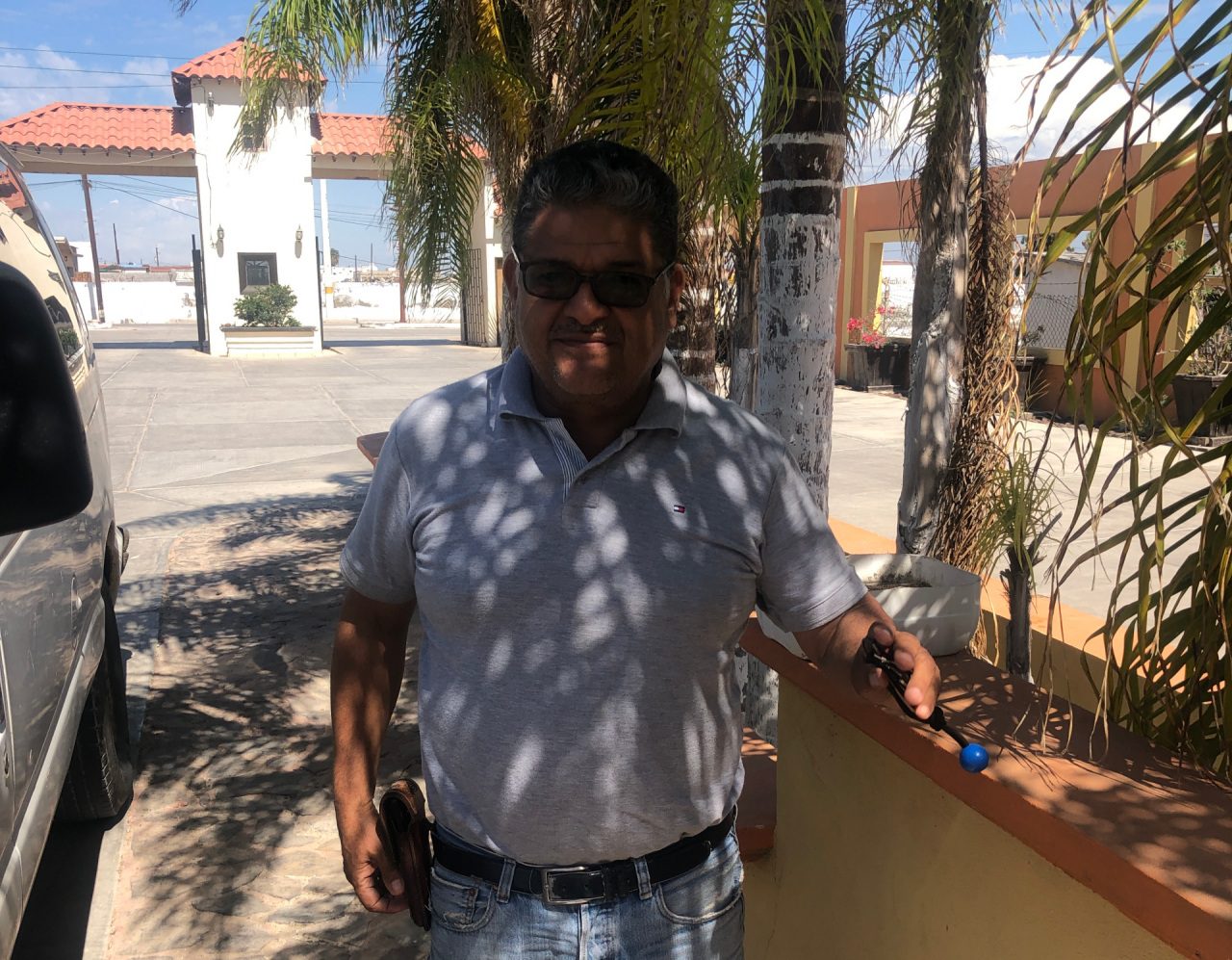 Restless he went to work in the tourist trade, which had burgeoned around the grey whale population that wintered in the bay. Covid was a tough time. Everything shut down for two years. Only recently, have things started to pick up. Unlike the States, people in Mexico are more prudent, masks more prevalent.

We pushed on to Santa Rosalia, a copper mining town, where Highway 1 becomes a rutted, cobble-stoned, bicycle-defying challenge. The night we stayed there David was stung by a scorpion lurking in his shoe. After that we all took to shaking out our shoes before putting them on.

The place we wanted to linger at for days was Bahia Concepción, an idyllic bay, one of many that punctuate the mountains that flow down to the coast. We camped on a beach of the purest, whitest sand. The bay was owned by Olivia and Mark, her American husband. They opened their restaurant for our one-night stay. They also had a hotel but it was being repaired after a recent hurricane. 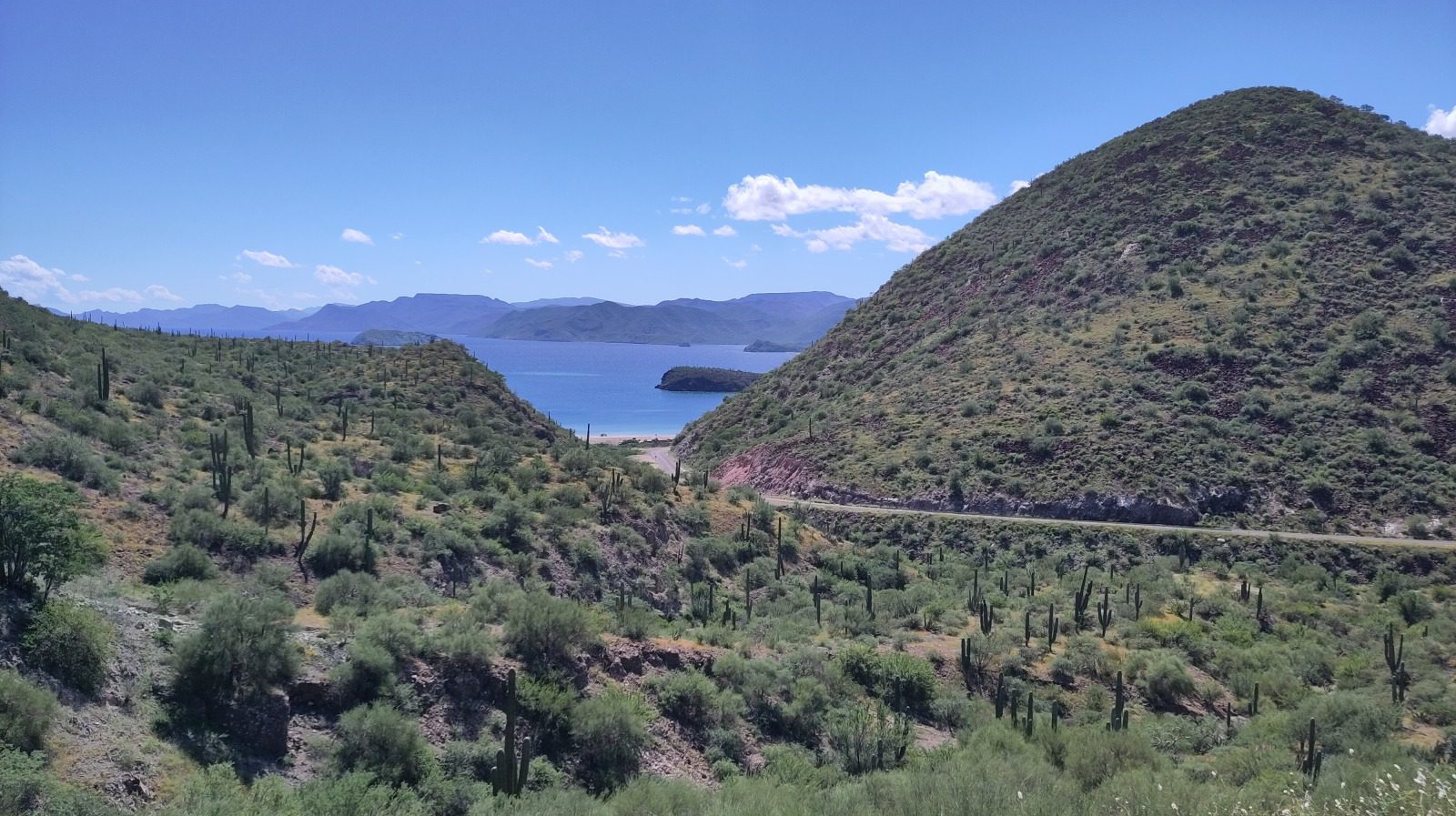 I sat at the bar while Olivia bustled about serving cold drinks and french fries and hamburgers. Matt was perched at the edge of the bar nursing a beer and a cigarette. He was an American who fled the States a couple of years before to settle permanently on the beach. 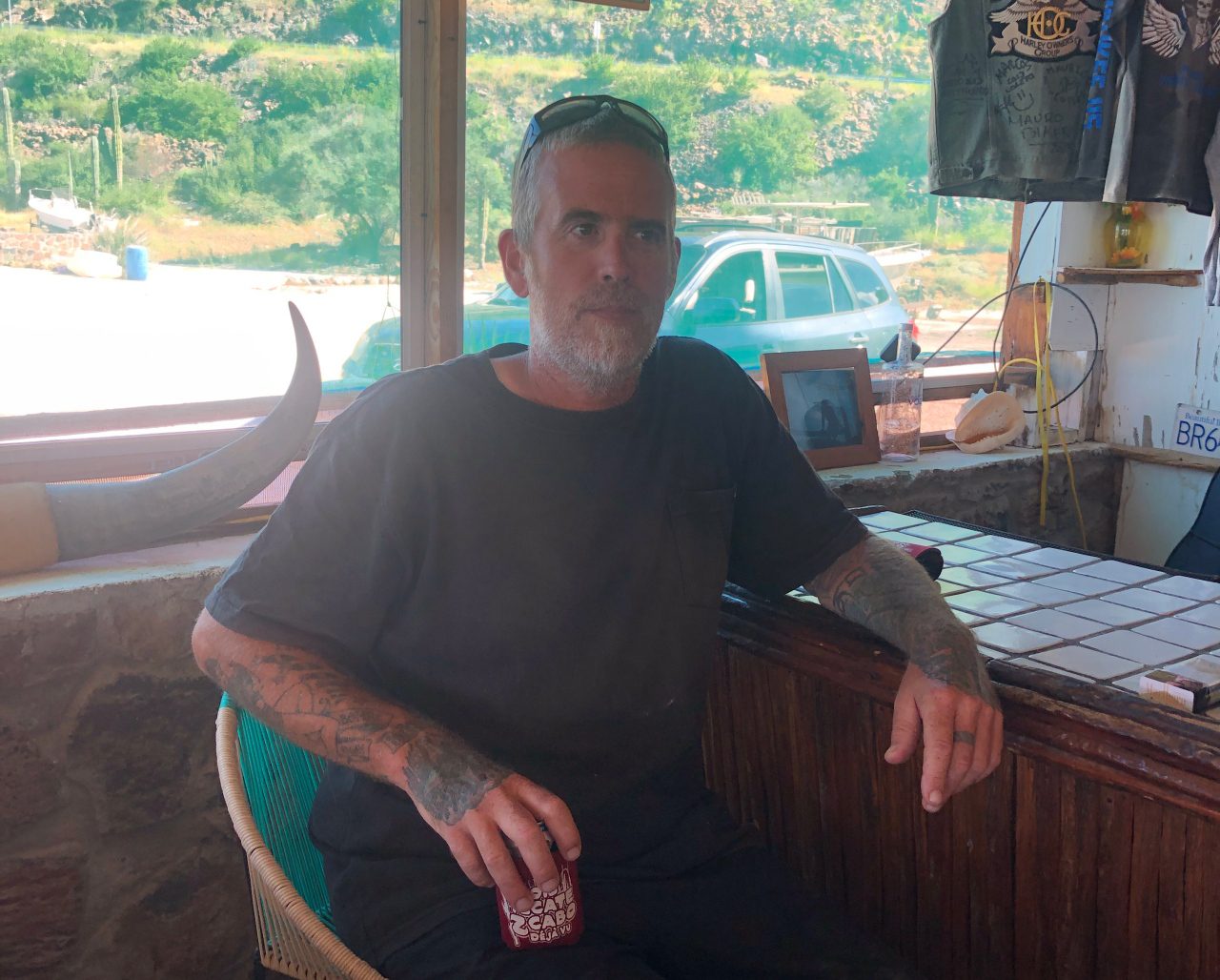 He said he’d had enough, America was “becoming untenable”, more so when Covid hit.

I wanted to know what he meant but he drifted off onto other subjects. Later he told me more about his life. He was in his late forties and had grown up in a trailer park south of Seattle. At thirteen his parents split up, his mom disappeared, and his father worked all the hours of the day and night as a registered nurse. Matt quit school and was recruited by the local drug gang to sell the meth they were cooking in one of the trailers. By 17 he had a son, a year later a daughter. The year after that, at 19, he became a single parent.

“What about the mother.”

“She wasn’t capable of looking after kids.”

“How did you manage?”

He shrugged his shoulders. “I certified as a welder, set up a shop and had the kids with me at work until they could go to school.”

At the crack of dawn we cycled up the hill on our way to Loreto, the first Baja tourist town proper we’d come to.  That night we sat in on a public concert in the town square, one of the many events established to celebrate the town’s 325th anniversary of its founding. Despite the ease and amenities we were happy to leave. Spending a day there felt too much like having stumbled into a package holiday.

At Las Positas we camped on the village’s church grounds, a first.  We set up our tents amid giant cacti and exhortations to a devout life. In the background I could see the young priest in black cassock hurrying to minister to a needy villager. 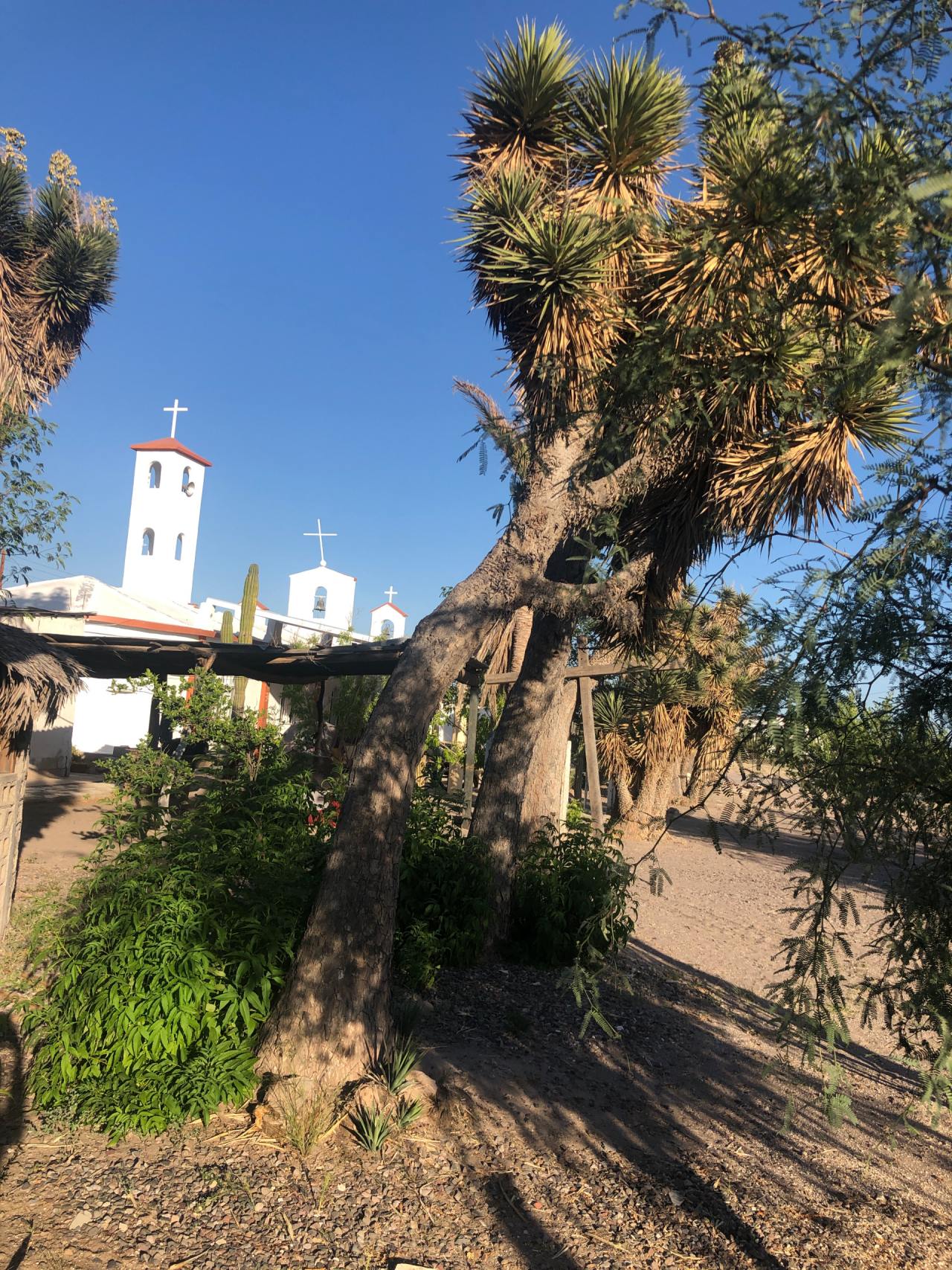 We stopped at La Paz, a larger version of Loreto where some of us spent the day snorkeling with sea lines.  After that it was an easy two days to Cabo, a mega tourist destination. Soon we’ll be on the mainland and as someone said, “the real Mexico”. It certainly felt that we had traversed a world apart, a Mexico that, apart from isolated incidents, lived off the beaten track of Mexican history.