You can hear the roar of the engine as the tiny red car careens around the corner. There’s no deceleration as it speeds towards us. The driver’s face, like that of an assassin, is steely and indifferent, and seems to revel in this game of chicken. There’s no winning for us on this tiny road and we tuck in tightly as the vehicle explodes past. Inside, at the wheel, is an elderly woman likely in her 70’s. She raises a finger from the steering wheel in an apathetic acknowledgment. I instinctively I smile and nod back and think to myself “maybe she’s not so bad after all.” I only realize later I didn’t see what finger she raised.

Drivers here drive fast. I’m not aware of an Irish car racing pedigree but, damn it, there could easily be one. Speed limits of 80kmph on tiny winding roads seem to be more a challenge than a limit and signs in Irish seem to cry out in encouragement. “Go Mall” is written on signs everywhere. Say it out loud: “Go Mall!!!!” What does that mean to you? “Faster” maybe or “Come on now, quicker, quicker!!” or at the very least “Go, go, go!!?” Well, in Irish, it means slow. Or so they say. I don’t believe it. 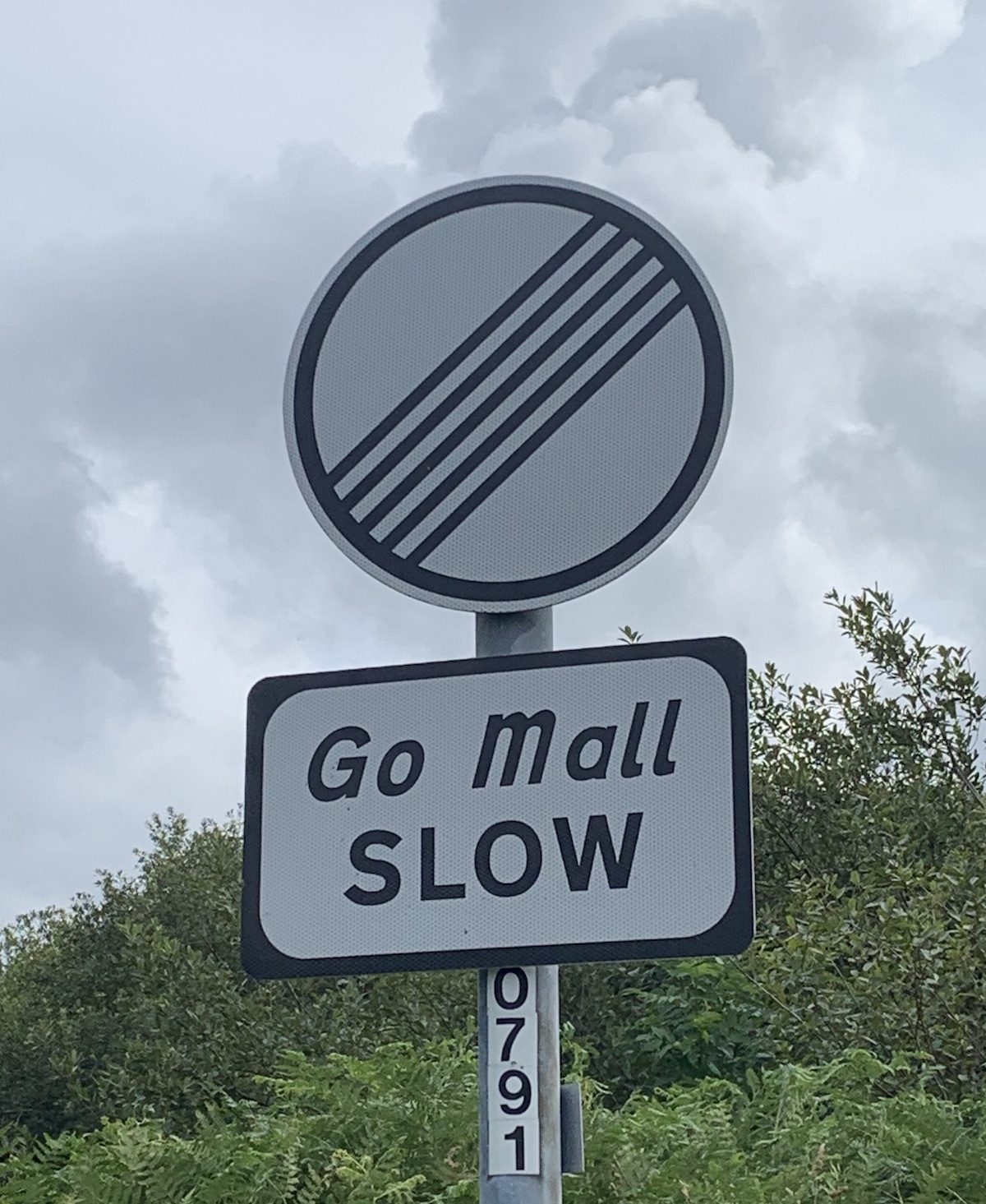 No one drives slow in Ireland and speedy drivers are rarely pleased by our slow-moving presence. The bulk of the Wild Atlantic Way is on so-called ‘R’ or ‘L’ roads that are generally free of traffic but occasionally we must navigate the more arterial ‘N’ roads that criss-cross the country and that’s when things get tense. ‘N’ roads are often no wider than their rural counterparts yet need to accommodate a much higher traffic volume that includes trucks, buses and RVs. There’s rarely a shoulder to ride upon and we feel very vulnerable, certainly when most drivers seem to be channelling their inner Lewis Hamilton.

The Ring of Kerry is a peninsula that extends out into the Atlantic on Ireland’s South West corner. It’s much like the Dingle peninsula but just wider. The road that circumnavigates its perimeter is the N70, a dreaded ‘N’ road, with enormous amounts of traffic on it. There are no ‘R’ or ‘L’ roads for us to take so rather than risk our lives facing down speed-crazed drivers for two days we decide to cut across the peninsula and ride the Gap of Dunloe instead.

The Gap of Dunloe is a narrow mountain road that punches its way through the imposing mountain range that runs down the spine of the Kerry peninsula that includes Carrauntoohil, Ireland’s tallest peak. The road is a magical wandering that links tiny mountain tarns up through a labyrinth of towering cliffs and walls of green. It unfolds like a vision in a fairy tale’s dreamscape coming to life. 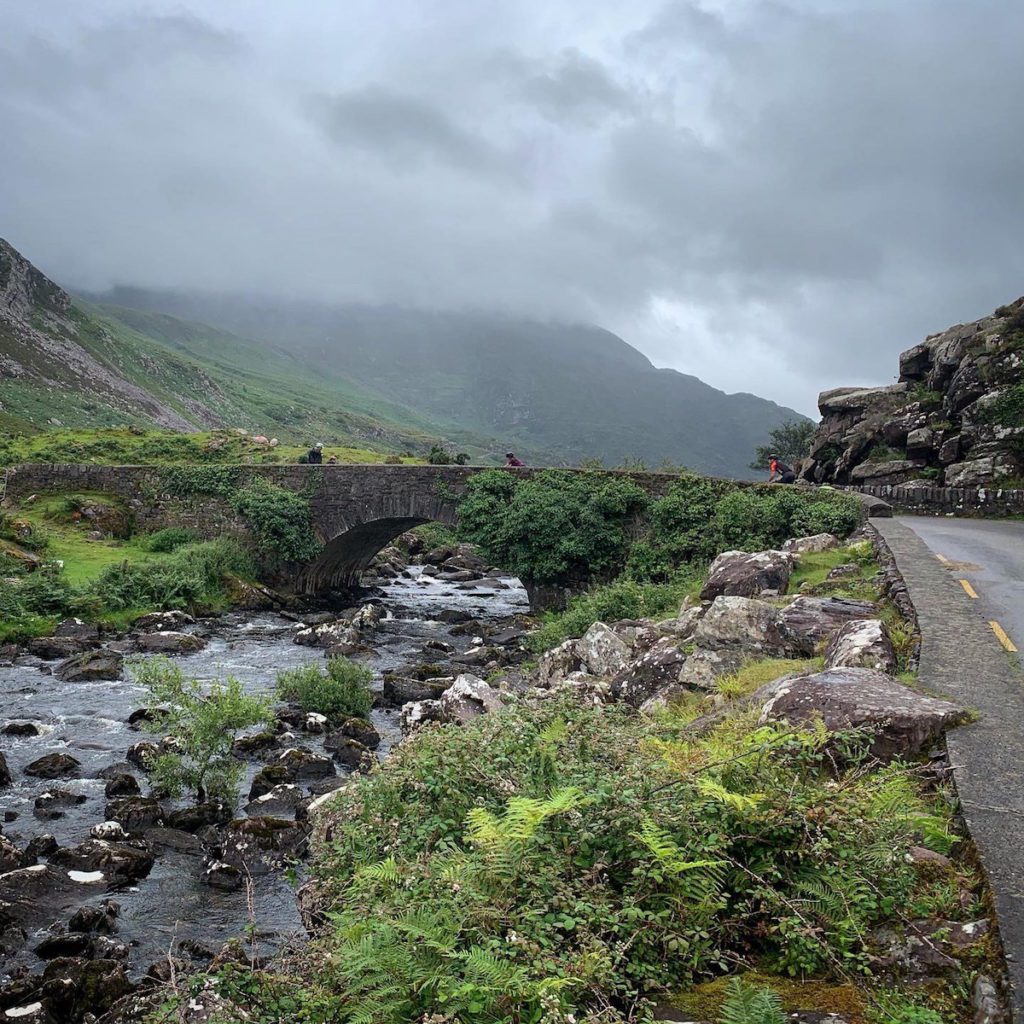 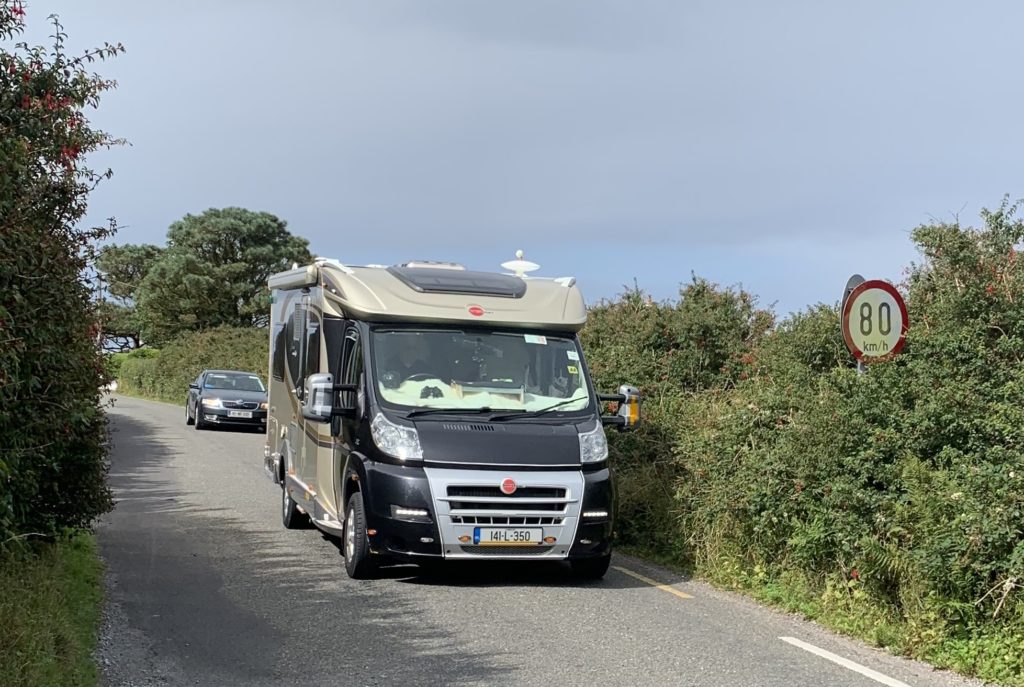 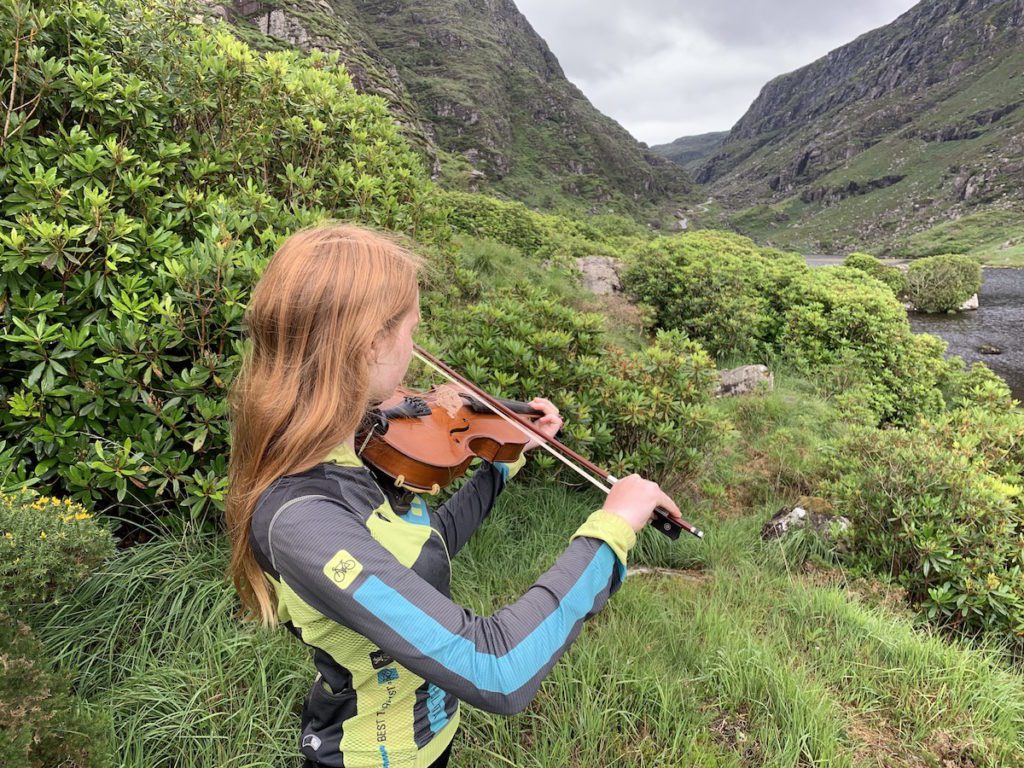 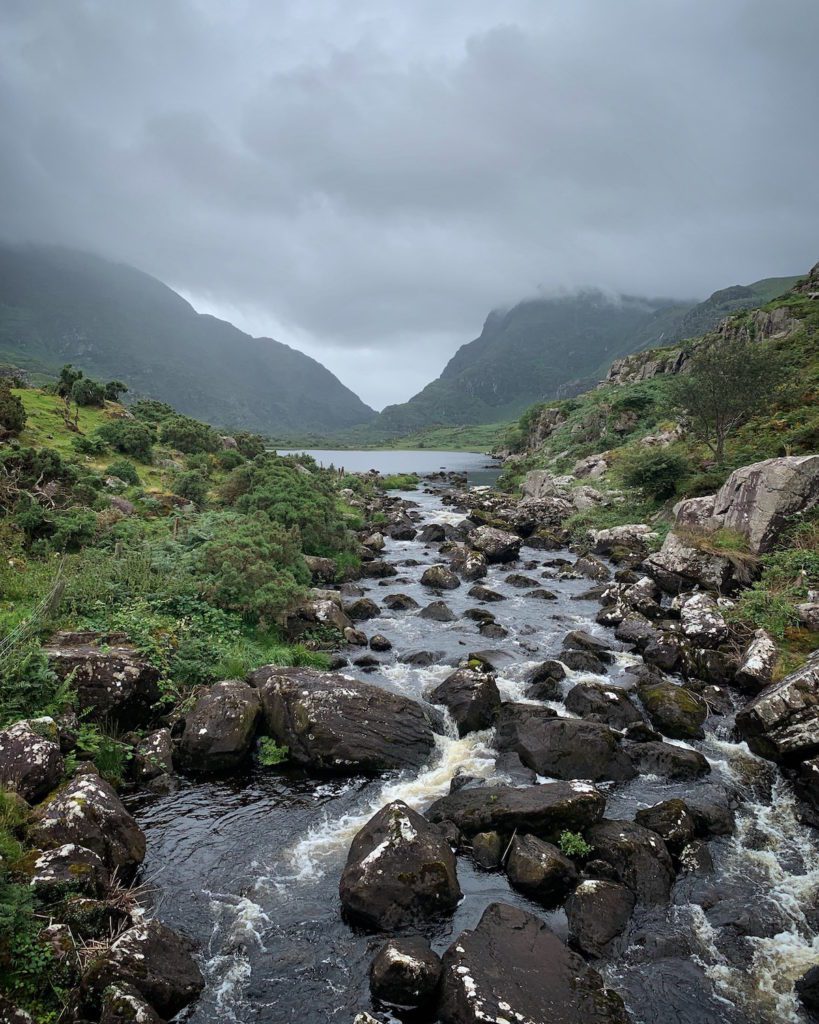 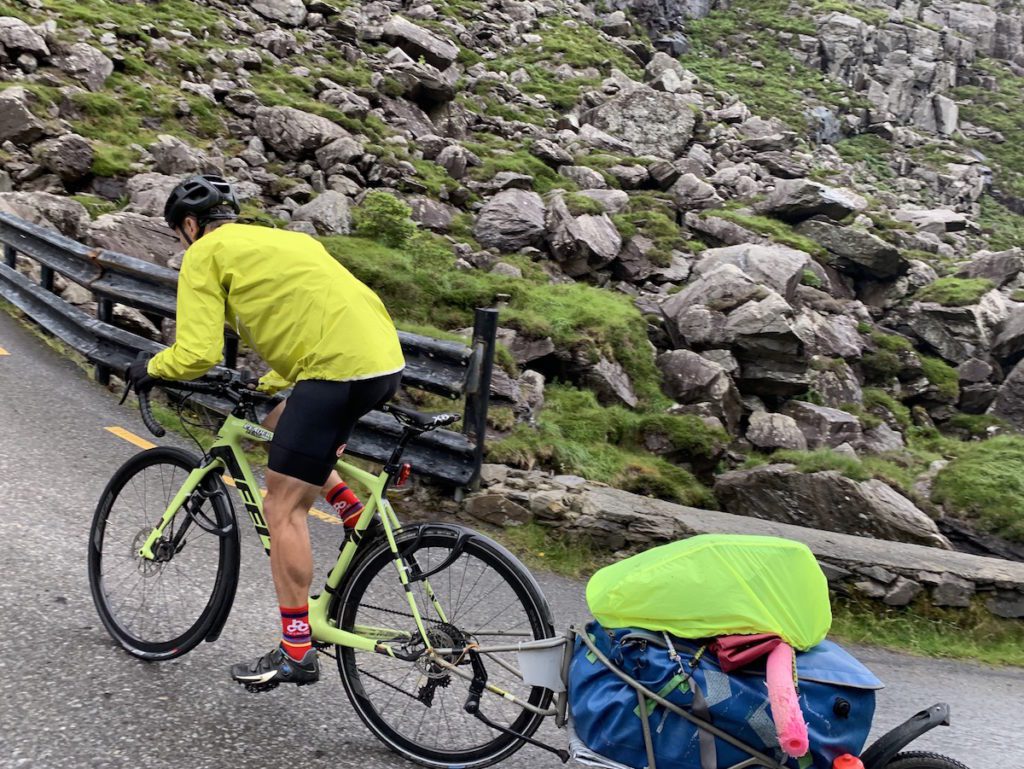 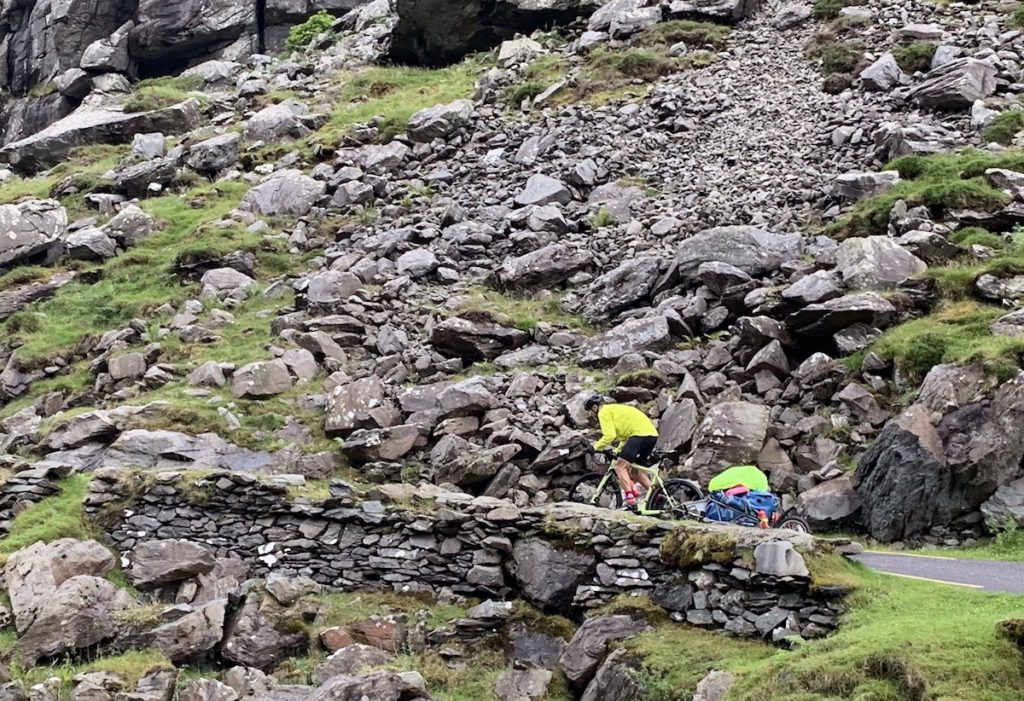 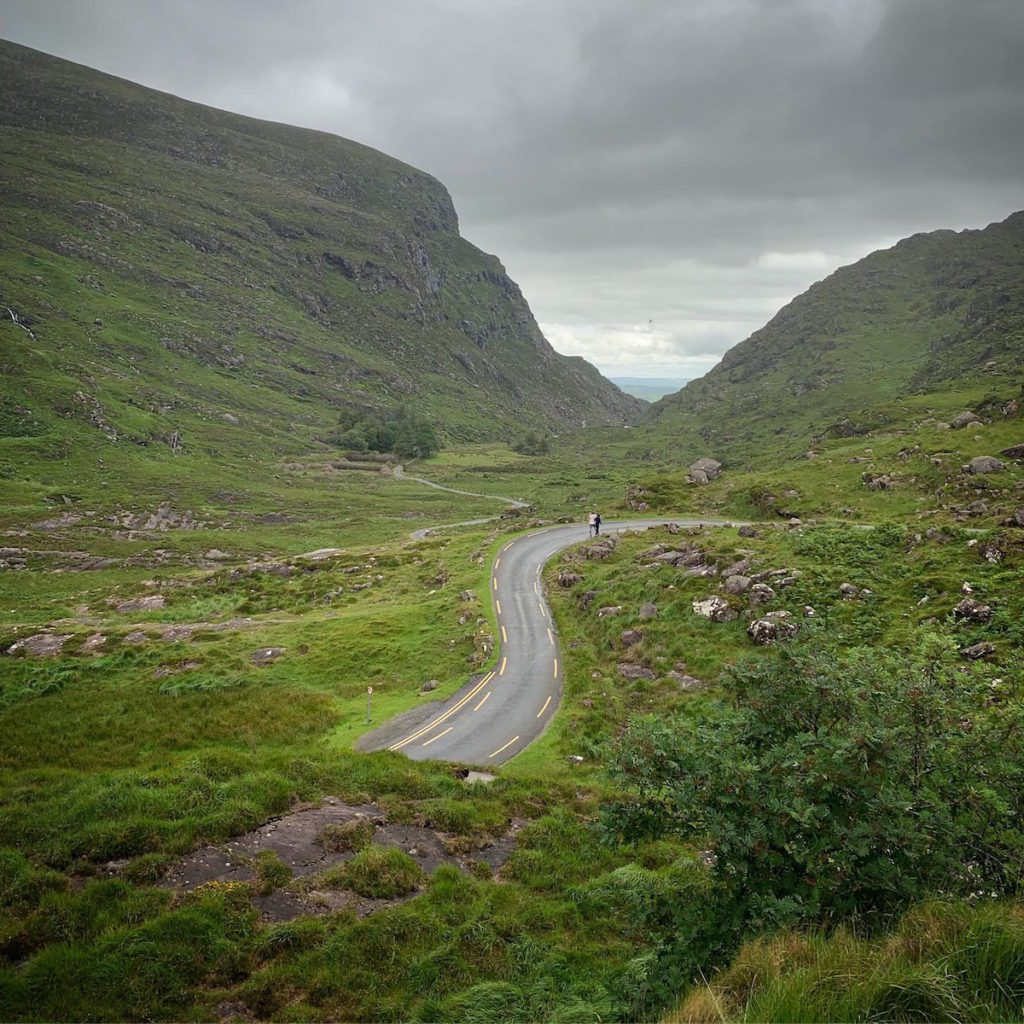 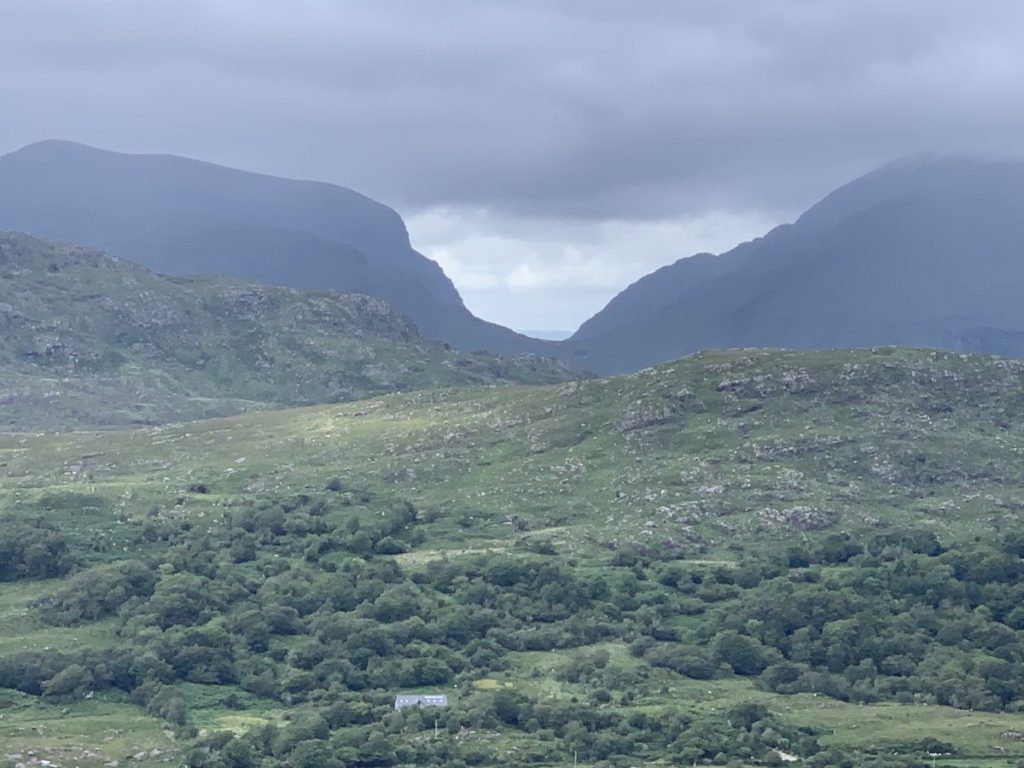 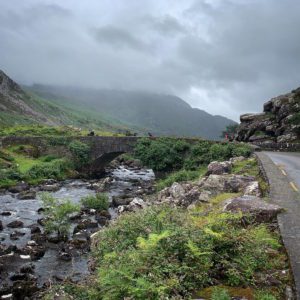 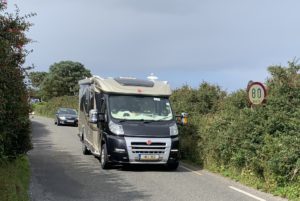 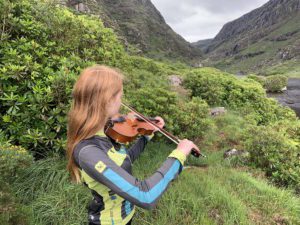 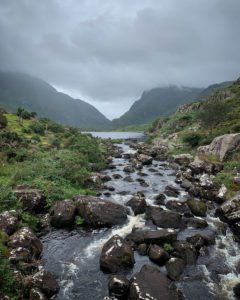 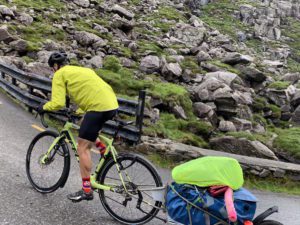 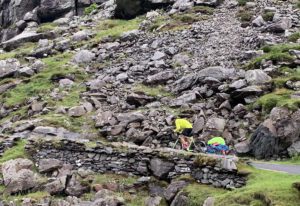 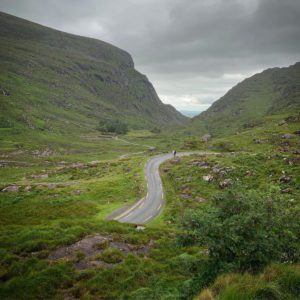 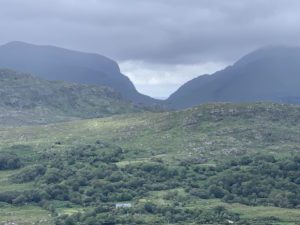 Over the course of this cycling adventure I have carried my daughter Arianna’s violin atop my trailer in hopes that she’d play. She’s a member of North Vancouver’s North Shore Celtic Ensemble and has a quiver of Irish songs at her disposal. Our hope has been that she’d join a traditional Irish musical jam at some point on this journey and get a feel for a true trad session in its element. But this hasn’t materialized. After over 1500 kilometres on the road I’ve come to regret hauling this considerably awkward and bulky item behind me but today is different. On a small rocky outcrop Arianna takes out her violin and plays the traditional ballad of The Gap of Dunloe on the Gap of Dunloe. The sound of her violin pierces the silence of this alpine world with only gusts of wind as her accompaniment. The moment is an enchanting interlude and makes the effort to get the violin up here worth it after all.

Part 7: An Antarctic meeting in Ireland