We missed Hurricane Roslyn by a few hours. We were in Puerto Vallarta having crossed over from Cabo in Baja. We’d seen the alerts and the busy preparations of boarding up store fronts. The next morning we headed east into Mascota in the western Sierra Madres. We felt the tail end of the storm as the rain pounded down all night. By morning when we were readying to mount our bikes it had stopped, although the sky remained dark and threatening. 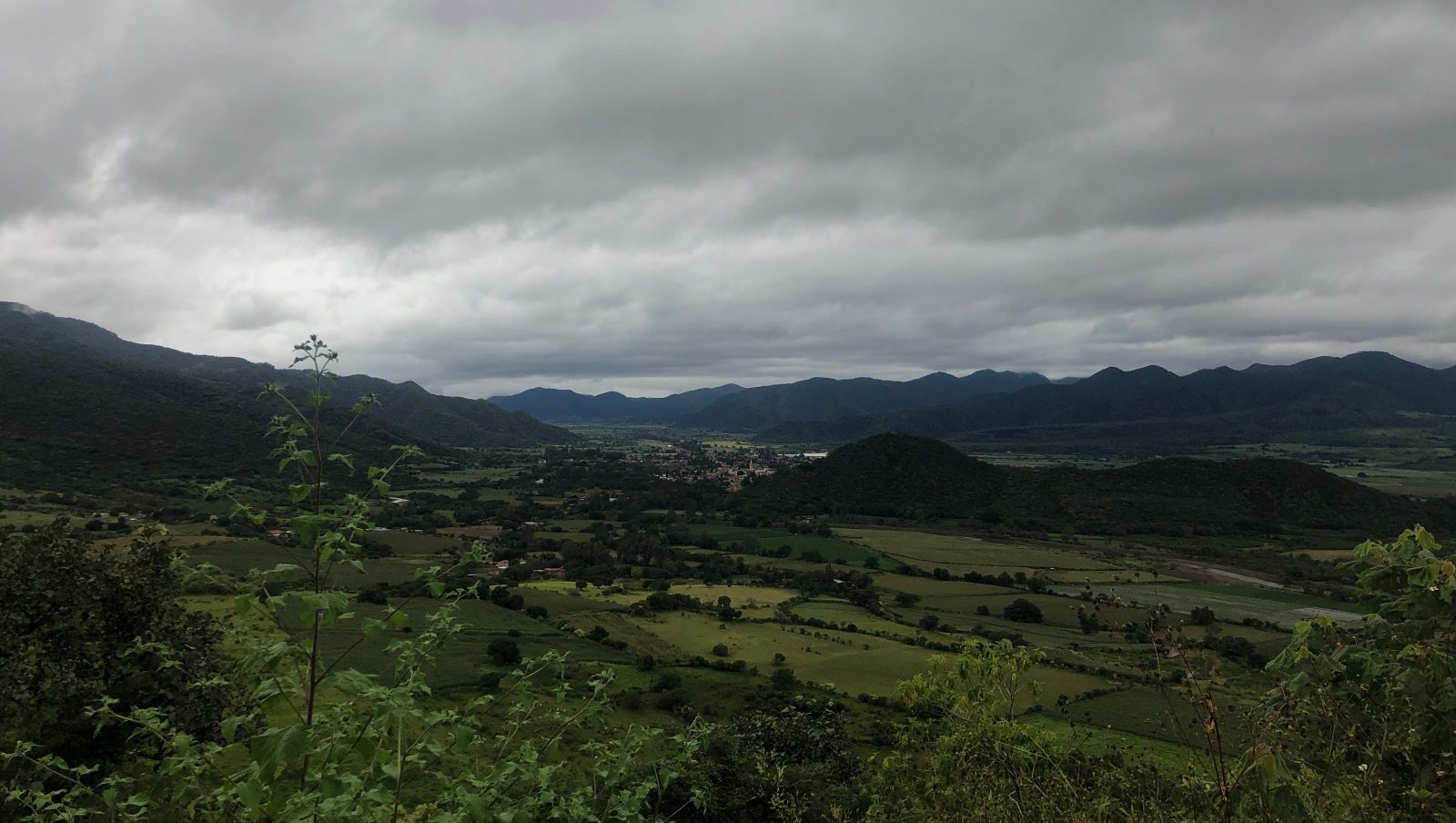 We cycled through the muddied, slick cobblestone streets of Mascota to Ameca, 124 km away with 2,100 m of climbing. Climbing would become the order of the day. Over the next 16 days we would climb a total of 21,000 m over roads that were often instruments to rattle your bones as near to jelly as possible. As one rider quipped, “I saw some tarmac between the ruts, gouges, and potholes big enough to swallow cattle.”

To add to the challenge it seemed that the road builders had a penchant for vertical heights: gradients are often pushing 10 to 12 to 14 per cent and from time to time to really test your mettle, would rise to 20 per cent. Let’s not forget the topes, the militant Mexican speed bumps that come in a variety of sizes, shapes and colours. Some are short, nasty humps, others are faced on either side of the bump with concrete corrugations and a few rise and fall gently. The worst are the ones that lurk in the shadows or melt into the road. Beware—they will cause at best a nasty jolt, at worst they will tip you off your bike.

Compensating for the harshness of the roads were some of the most spectacular landscapes of the Jalisco highlands: deep green valleys, forested mountains , streaming rivers. Here was old Mexico with villages where burros were as common as cars and men tilled every bit of arable land with ancient hoes and women rolled out tortillas and slapped them on a battered pan over an outdoor wood-fired stove.

From Ameca we made our way across the mountains to Ajijic on Lake Chapala, Mexico’s largest lake. It is a beautiful, old colonial town founded by the Spanish in the early 16th century. Americans and Canadians have retired here in droves attracted by its temperate climate and the lower cost of living. It’s estimated that immigrants make up more than half the population in winter.

Hans sat down to have a conversation with two older locals, Gilberto and Santos, sunning themselves on the main street. He’d noticed that one had a rather nice mountain bike. Santos told him that it had been given to him by a Canadian woman who had no more need of it. He’d been very proud of his new acquisition except his friends started making fun of him for riding a woman’s bike. He came up with an ingenious solution. He cut a broomstick handle to fit as the top cross bar and wrapped it in black tape. Presto—transformed. No more allusions to failed masculinity. Santos did go on to advise Hans on how to maintain his virility—duck eggs and chocolate.

The run to Ocotlan included a 10-km strip of a narrow cobblestone roadway with buses, trucks, cars and donkeys vying for right of way. Our bikes didn’t stand much of a chance. So we’d pull over to wait for clearance and the hope that we had enough muscle power to get the wheels rolling again.

We stopped for a cold drink at a store in one of the villages that line the roadway up the mountain. Lake Chapala sparkled below us. I spoke to Juan in my broken Spanish. What did he do? He was a fisherman. The lake provided a good living.

Two young men, in their late teens or early twenties, stood nearby on their battered bicycles. They grinned shyly, curious about these strangers in Lycra on their fancy bikes. I asked if they went to school. No, they worked on the lake as well. A boy, who looked like he was eight, but he told me he was twelve, caressed the handlebars of my bike and tinkled the bell. Did he go to school? Yes, he said, and pointed vaguely up the road.

Ocotlán is   an industrial town. We cycled along a hurly-burly of  purposeful traffic: cars, trucks, motorcycles and scooters spewing exhaust and fumes as they hurried, it seemed, to a merciless timetable. The main drag leading into town was lined with paint shops, hardware stores and tire and automotive retailers. We stopped at an al pastor restaurant packed with locals. Al pastor is a Mexican dish made of thin slices of pork shaved from a rotating spit, placed on a tortilla and topped with onions, coriander, pineapple chunks, chili, and salsa. Happily, for me the vegetarian, they had cheese quesadillas. The service was efficient, the food excellent.

Ocotlán’s town square is dominated by a massive church. Banners announced the 175th anniversary of the miracle of Ocotlán. In October 1847 a massive earthquake destroyed much of the town. The following Sunday as people gathered at the ruined church an apparition of the crucified Christ, Señor de la Misericordia, appeared in the sky.  The church itself was built in the late 1800s and next to it, honouring the vision of Christ, the town erected a massive crucifix in the late 1950s. 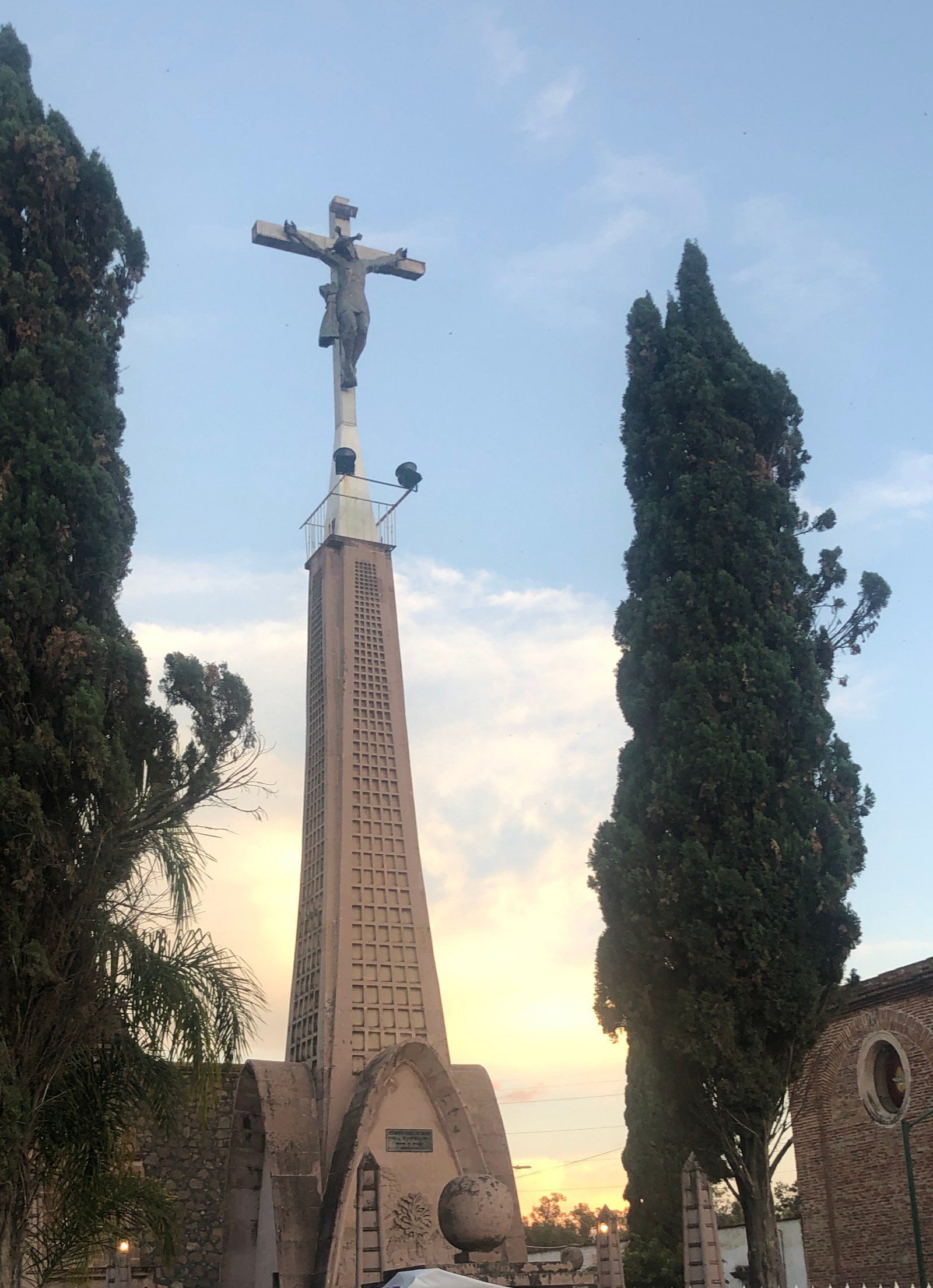 As part of the anniversary celebrations a stage was built at one end of the plaza where a troupe of local youngsters were rehearsing traditional dances. Among the spectators was Hugo. In his late twenties Hugo was back home from a work stint in California where he runs parenting classes in schools for the Hispanic community. It is a program he developed himself after working with youth and seeing the points of conflict between generations. He spoke with eloquence and conviction about his work. He is equally devoted to his hometown, where he recently bought a home. He invited me to come and stay any time I wished.

We were off early next morning to Arandas, through the heart of tequila country. Our lunch stop that day happened to be next to a major tequila distillery, Embajador. Francisco, the general manager, is passionate about tequila and was more than happy to take a bunch of disheveled cyclists on a tour of the plant.

I asked him how long he’d been involved in the industry. He said since he was sixteen when Don Julio Gonzalez, a legendary figure in the creation of tequila the equivalent of single malt whisky, hired him on as an odd job person. Tequila is Francisco’s life. He went into raptures describing how to smell, taste and judge the finest tequila. He reminded me of a sommelier I had encountered once at the elegant Carleton Hotel in Cannes who could distinguish hundreds of different wine aromas.

Onwards and onwards we cycled, up mountains and down valleys. We were on a timetable; a continent to cross in a prescribed period of time. We were nearing the end of October, which meant in villages and towns preparations were full steam ahead for the Day of the Dead.

In the main square of San Francisco de la Rincón students had prepared a series of highly sophisticated displays centred around photos of the deceased of their community. There were paintings, floral displays and offerings of fruit. It felt like I was attending a college vernissage that given its theme could have been macabre, but wasn’t. There was a sense of gaiety and celebration, an understanding of death as part of life. 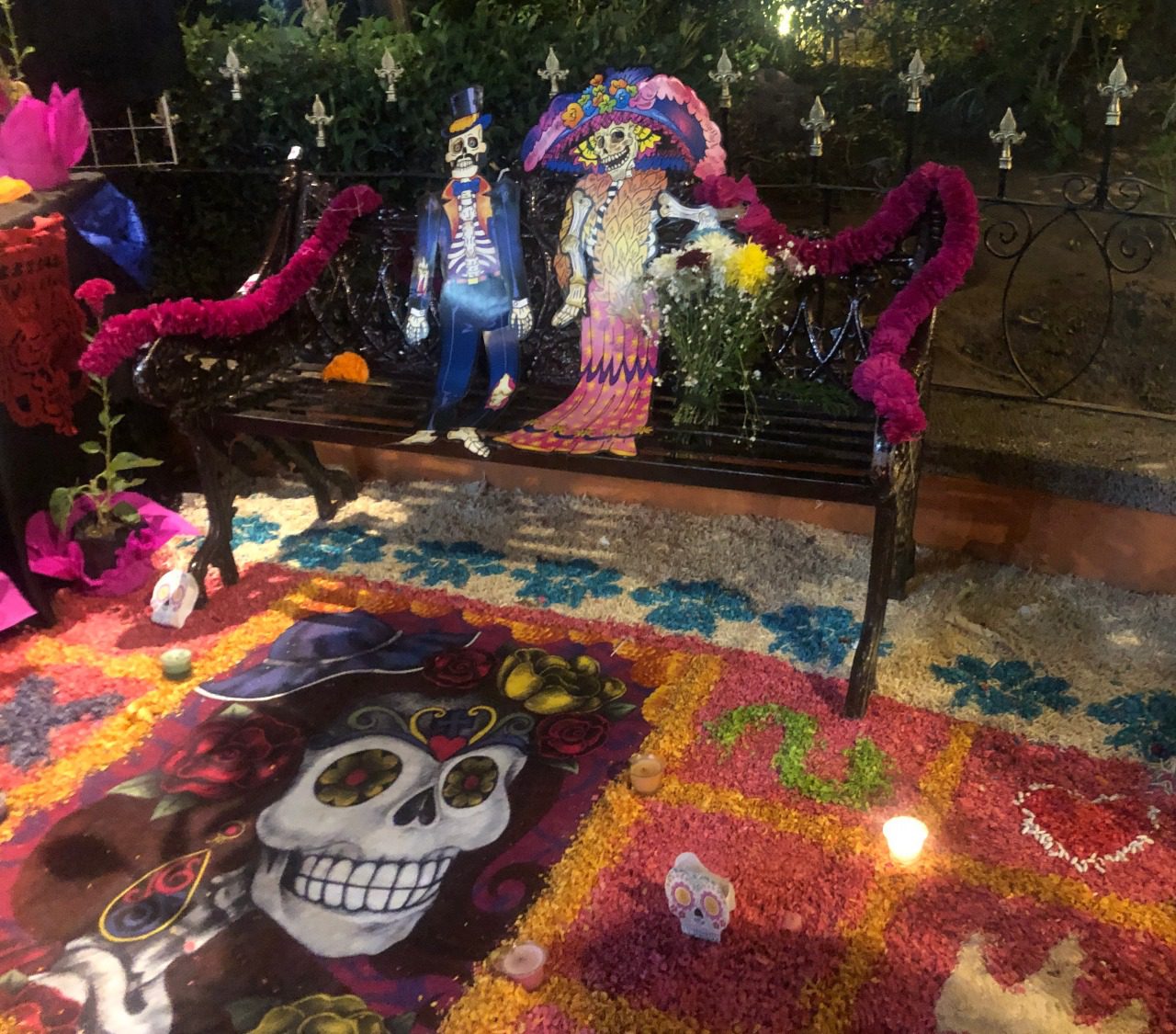 The festivities intensified over the next few days as we approached the climactic Día de los Muertos, celebrated on November 1st and 2nd. Every town and village was decorated with brightly coloured stenciled streamers strung across the streets featuring skulls and other symbols of the other world. Ubiquitous everywhere were cartloads of cempazúchitl, the golden Mexican marigold, symbol of the Day of the Dead.

In Guanajuato the streets were bursting with activity and life and music even as death was the theme. Britton Morrell, a cyclist who had known of our coming, invited us on a walking tour. He is a tall, imposing man, a dual American-Mexican national who has a home here. His family roots in Guanajuato go back to his great grandfather who, he said, like all the Morrells were seduced by Mexican women. His great grandfather established a hotel, which is still run by Britton’s cousin who happens to be married to a Hungarian. I was delighted, as a Hungarian by birth, to chat away in my natal tongue.

On November 1st we biked into San Miguel de Allende. The last few kilometers were the toughest, a 16% gradient of rough-hewn cobble stones. It took every ounce of nerve and energy to maneuver through the dense traffic and keep the bike rolling up and forward. The town was fervid with a parade of people in an endless variety of painted death mask faces. 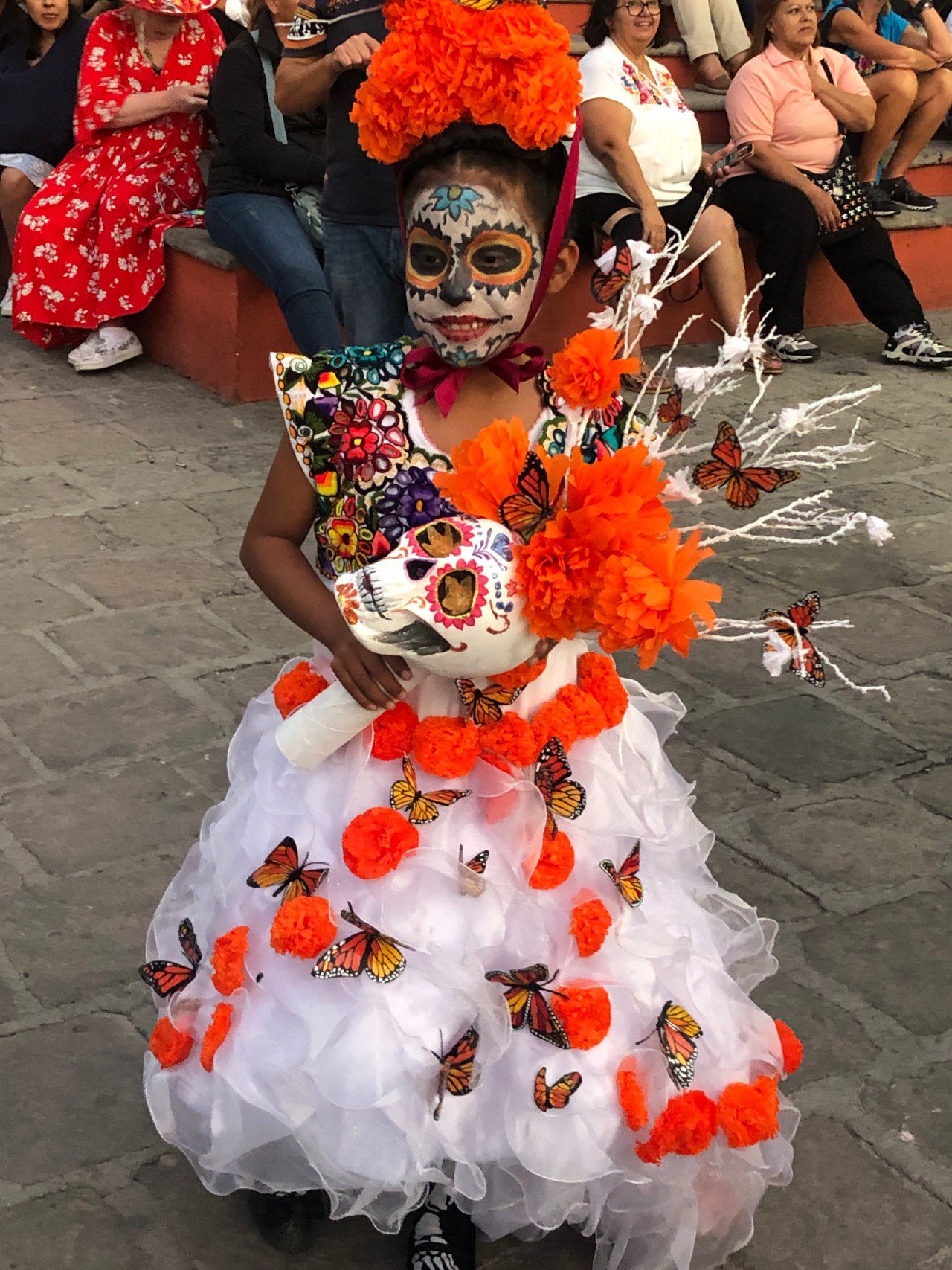 We cyclists took our part. For us it was Halloween, a party costume. How could we know the complex meaning and history of the event, whose origins remain contested in Mexico itself? Were its roots in the European danse macabre, the Aztec celebration of Mictēcacihuātl, goddess of death or syncretic mix of Spanish and Aztec traditions?

A rest day in San Miguel then back in the saddle in the relentless push to our ultimate goal. We cycled through the verdant landscape of the Monarch Butterfly Biosphere Reserve recognized by UNESCO as a World Heritage site. Every autumn hundreds of millions of the bright orange monarch butterflies undertake an incredible migration of thousands of kilometres from Canada and the northern United States to their wintering grounds here where they nest in the oyamel fir tree forest. We saw only a few early arrivals; the great mass would start to arrive in another two weeks.

We spent a night in Valle de Bravo, a weekend getaway destination for residents of Mexico City and Toluca. It’s where we encounter our first major traffic jam, with vehicles lined up for more than a kilometre as they snaked into the city.  At a small café, Pampa Yololo, I meet Berenice and her husband Cesar. They opened their place two months before after having spent several years working and saving money in California. They are ambitious with plans to become the premier café in Valle and developing their own coffee roasting business.

We left Valle de Bravo with two days of hard riding ahead of us to Mexico City. The route to Santiago Tianguistenco takes us on a 34-km climb called “the Cow’s Tongue pass”. The day after, the ride into the city involves a 23-km climb reaching over 3,600 m (almost 12,000 ft). Some of us suffered the effects of the altitude with headaches, nausea and difficulty breathing. I seemed to have escaped as I plodded my way to the top. I expected a marker or sign at the summit. The only indication was a military checkpoint with half a dozen heavily armed soldiers patrolling the area.

Mexico City. Americas largest megalopolis. Our journey was not done but that day we relished our accomplishment crossing from the coast across the Sierra Madres into the interior of this vast and changeable country. We would take two days of rest before pressing on back to the coast and down the continent into Central America.

Early the next morning I wandered about the area where we were staying. Around the corner I heard the sound of music, a mariachi band serenading outside an apartment block at 7 A.M. Ah, Mexico, how I love you. 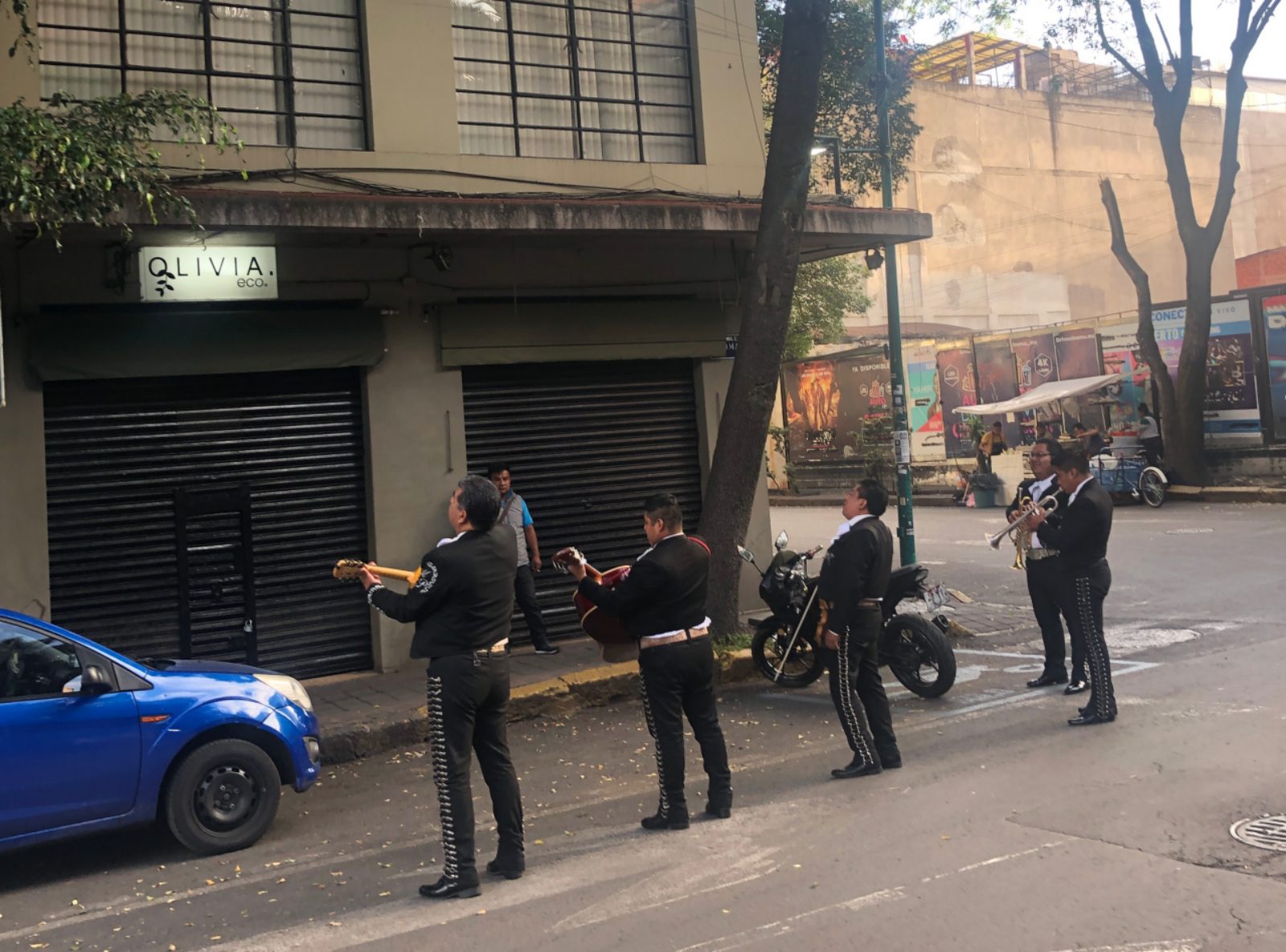