This is a barren landscape – the Burren it’s called – that epitomizes the wildness of the Wild Atlantic Way. It’s windswept and desolate with giant slabs of limestone extending to the horizon. Meticulously constructed walls trace lines over the landscape strangely guarding fields of rock with walls of it. What’s there to keep in or keep out up on those barren slopes of rock? 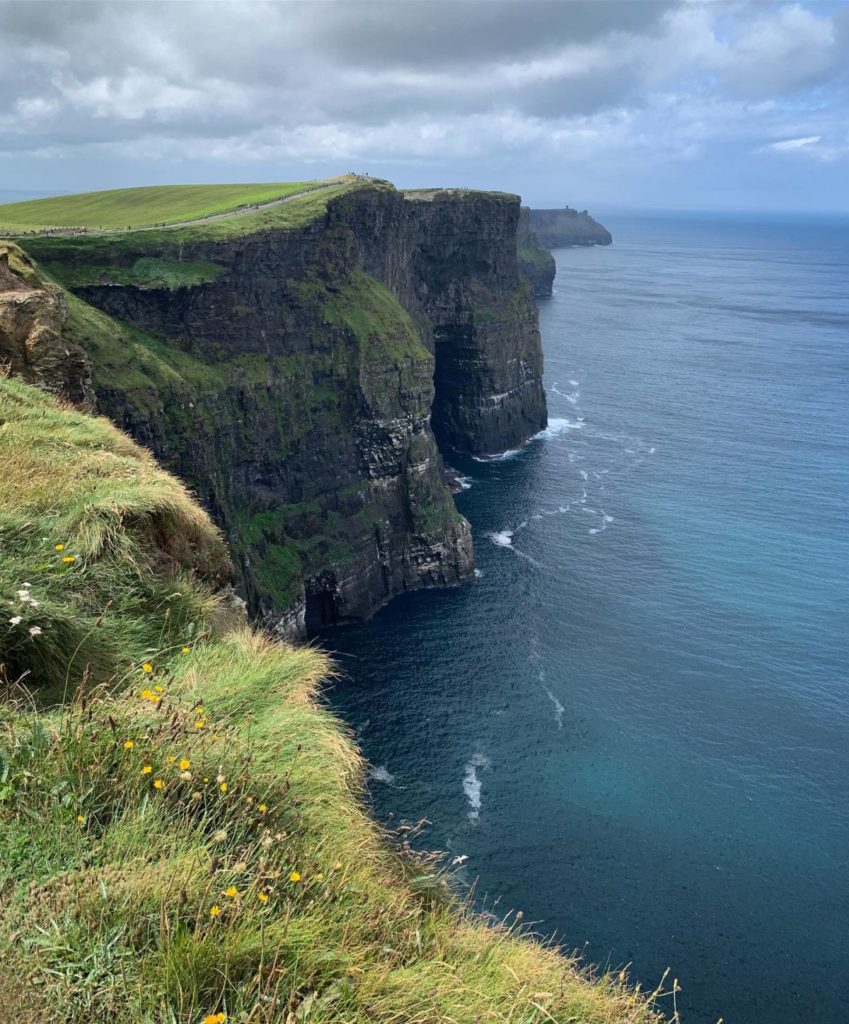 The Cliffs of Moher. 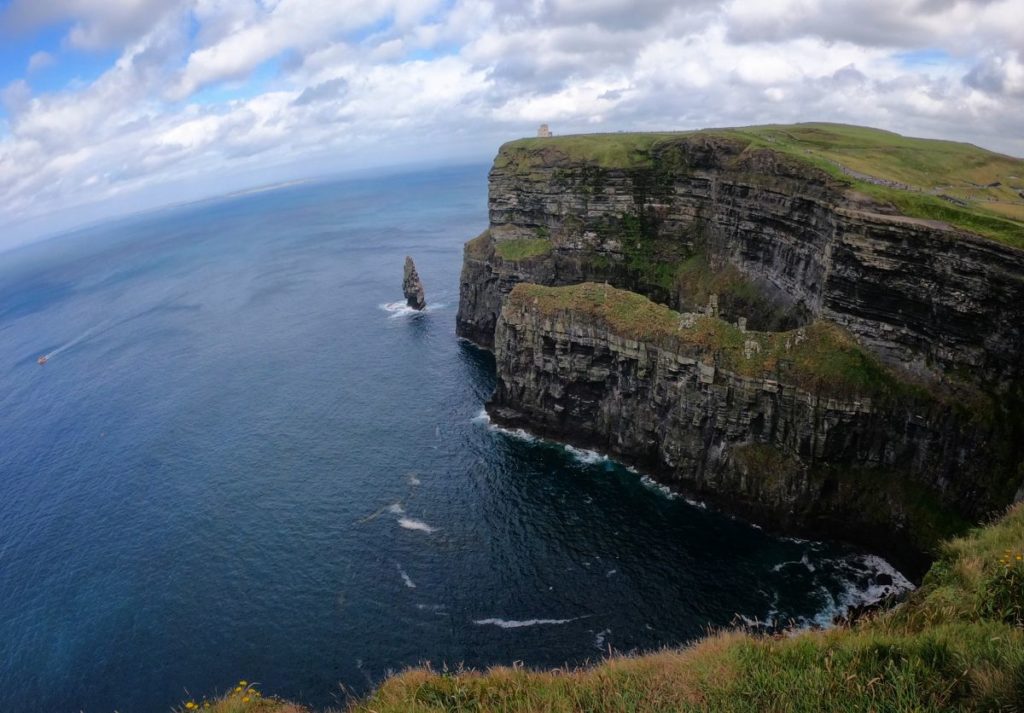 Castle on the Wild Atlantic Way 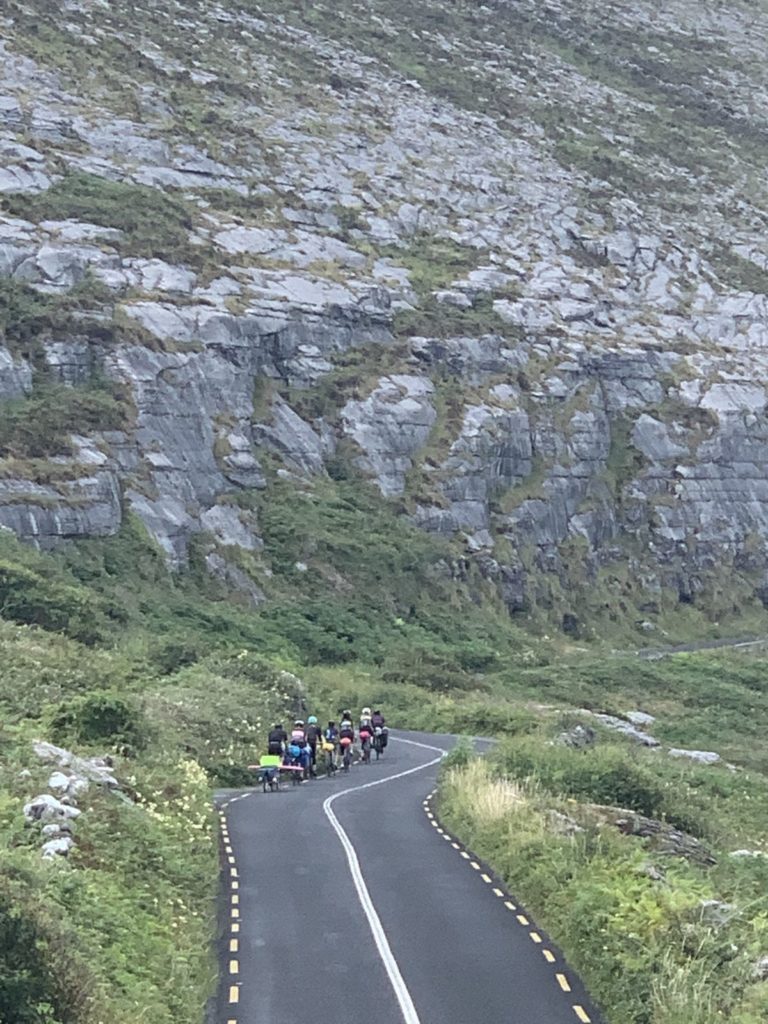 Ireland can sometimes be a barren landscape. 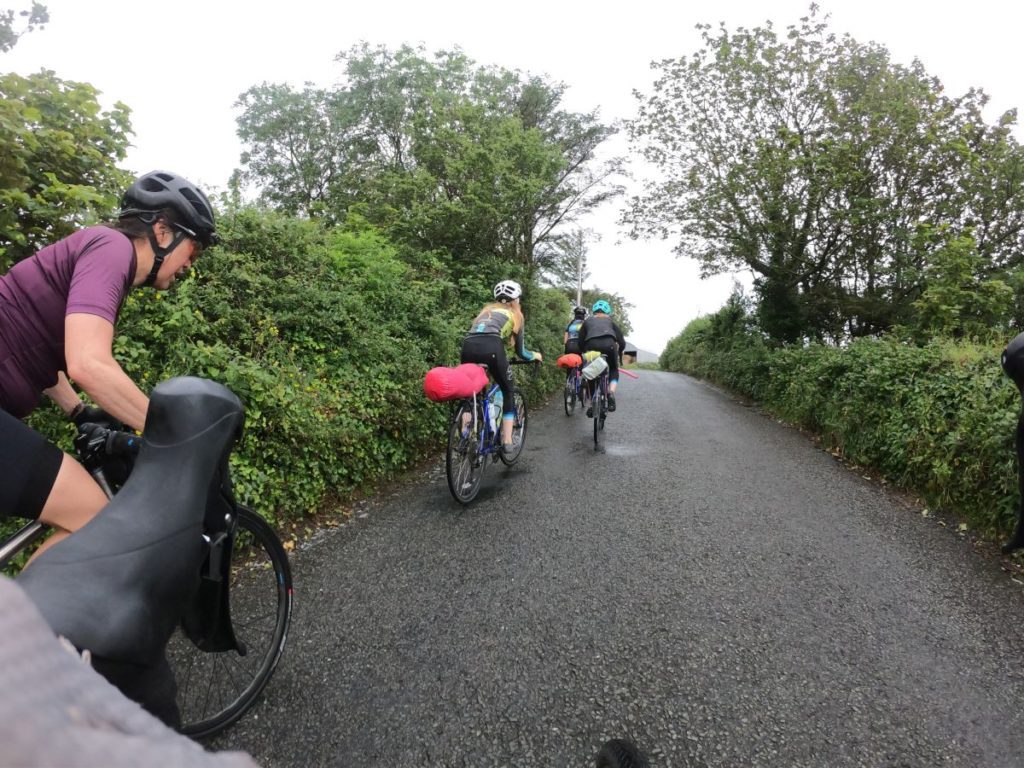 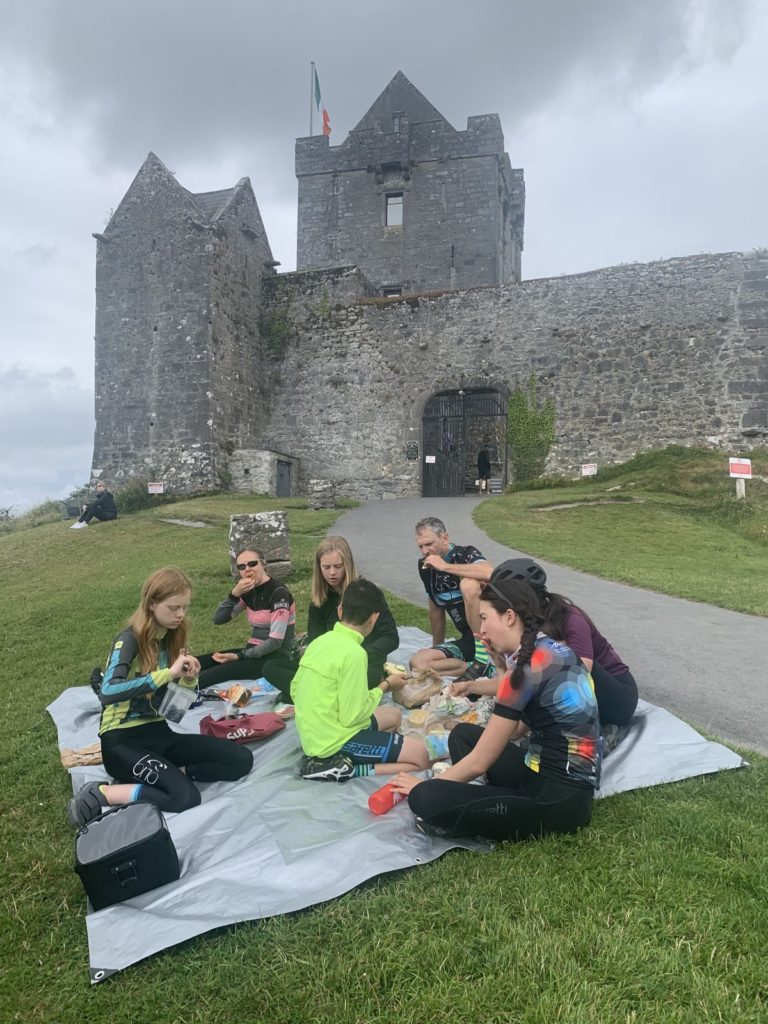 Lunch as a castle. 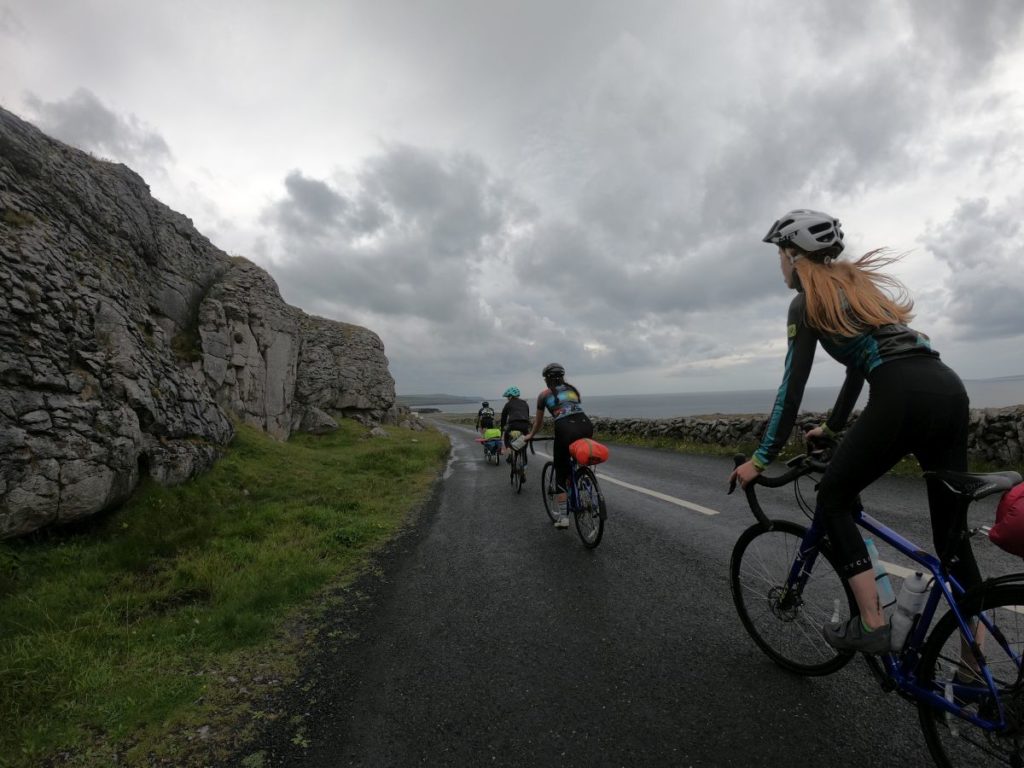 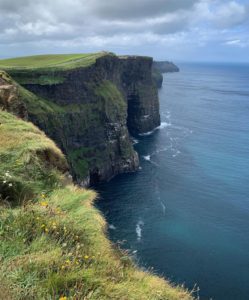 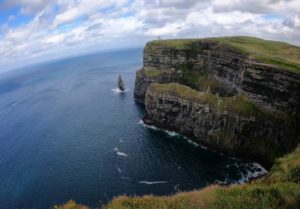 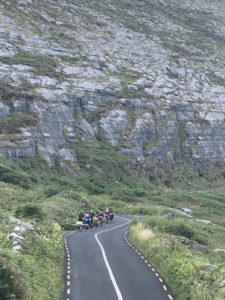 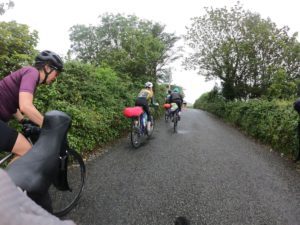 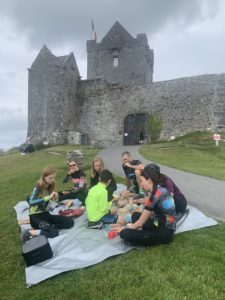 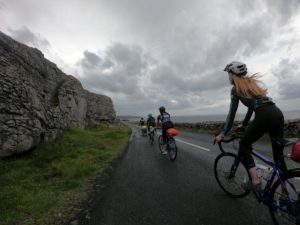 As we’ve made our way down the coast from Galway we’ve noticed significantly more tourists on the road. No longer do we have this place to ourselves but rather share it with the distracted, the rushed and the enormous. To say the roads in Ireland are tight is stating the obvious. Major two lane arterial roads are as narrow as residential streets back home and, out here on the coast, sections of road as narrow as a single lane must still accommodate trucks, tourist buses and the never-ending conga line of cars.

Driving in Ireland seems to be all about finding the right moment to pass. The tiny roads that trace the coast are rarely straight and force drivers to make assertive, if not impulsive, manoeuvres to negotiate slower moving vehicles. For us this creates a quandary. We’re a single line of eight riders that is both long in dimension and slow in speed. Aggressive drivers, passing at an inopportune moment, could easily find themselves facing down an oncoming vehicle around the next curve. The instinct then will be to turn into us. We’re not the only slow movers on the road of course. There are looky-loo drivers and farm vehicles everywhere – even the odd heard of sheep – but each of these road users presents a more sizeable object to pass and instils a greater sense of respect from the driver attempting to pass. Cyclists, on the other hand, are tight to the edge of the road and, to the hurried driver, could be more enticing to quickly pass. How does one dissuade such behaviour? With a pool noodle. 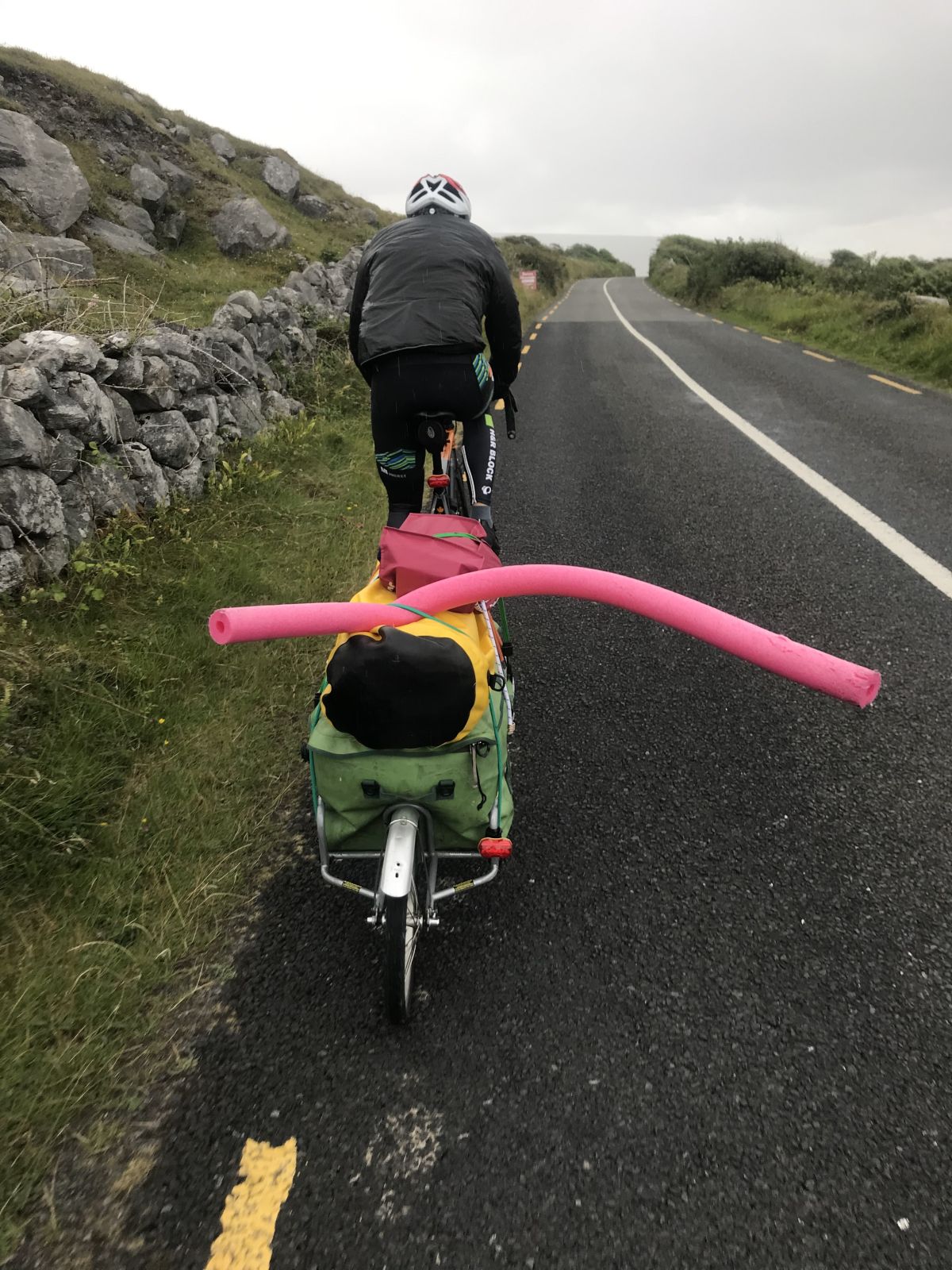 Yes, you read that right, a pool noodle – a cylindrical piece of buoyant polyethylene foam useful when learning to swim, for floating and for aquatic exercise. And also invaluable at keeping aggressive drivers at bay. Dave rides at the back of our ragtag crew and I at the front. We have both affixed a bright pink pool noodle to the rear of our trailers. They extend out into our lane of road adding an extra 3 feet to our girth. The pink noodle, to the passing driver, presents an object to manoeuvre around. The fact that it’s a piece of bendable foam doesn’t seem to matter. It’s part of our vehicle and needs to be avoided. What the pool noodle does is create an imaginary box around our group, me defining the top edge of the box and Dave the bottom. The imaginary box introduces one more layer of doubt to the passing driver and encourages an added level of care. It has worked superbly so far. 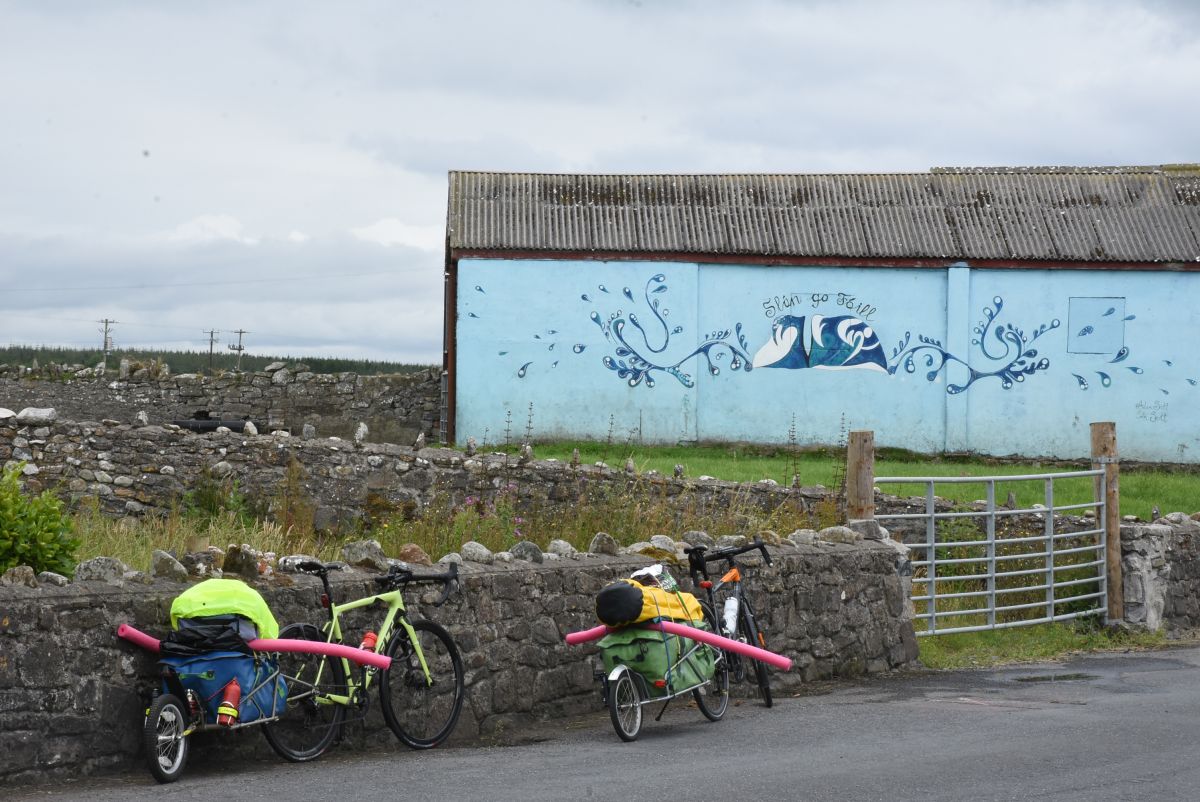 Today we travel down one of the busiest sections of road on the Wild Atlantic Way as we skirt the mighty Cliffs of Moher in County Clare. There’s no doubt our pink pool noodles will help keep us safe.