“Bang!!” You could hear the loud pop like a shot. “Damn it, damn it!” says Dave, frustration clear in his voice. “I got a flat!” 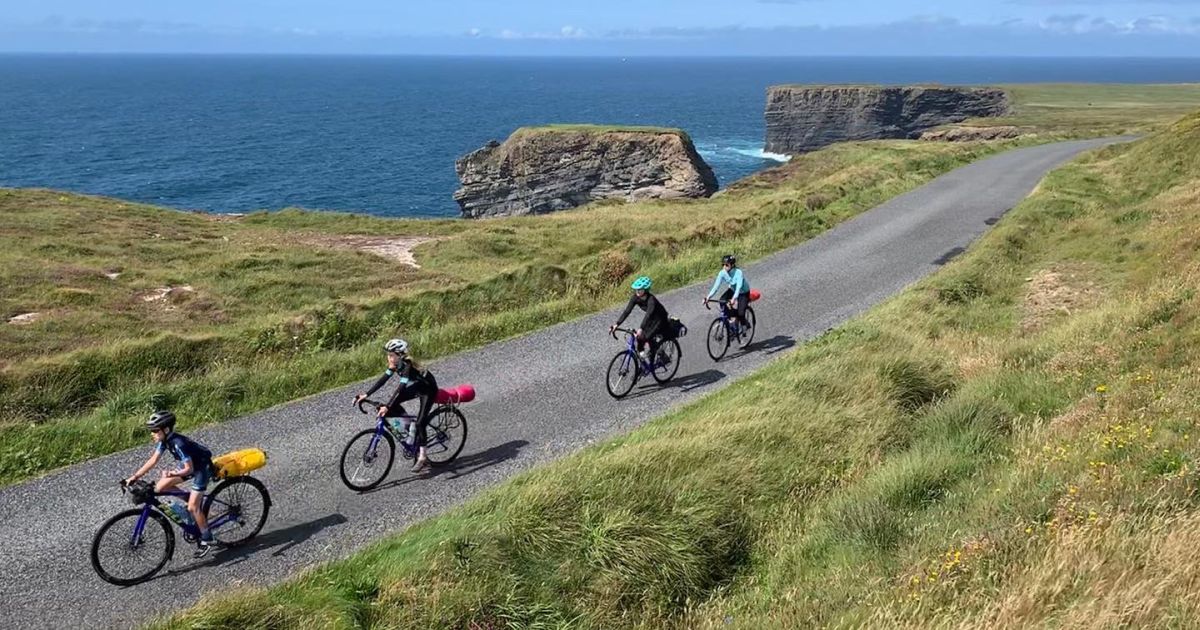 We’re riding through the town of Liscannor after walking the Cliffs of Moher and are looking for a place to stop for lunch. We’re hungry and didn’t need this now. We’ve been free of flats except for that one blow out on the Glengesh Pass in County Donegal. We had anticipated something soon but didn’t want it now.

We knew about the roads coming here and chose our bikes accordingly using a mix of gravel and cross bikes for the job. Dave’s on a Felt cross bike, the FX4. Nicky and I are on Norco’s and the kids are also on Felts but we’re all aligned in our envy of Brenda. She’s on the new Knolly titanium Cache, a super lightweight high-end gravel bike that eats this stuff for breakfast. This machine is Knolly’s first foray into the new burgeoning gravel bike market and they’ve created something really special. No surprise of course. To mountain bike aficionados Knolly is known for supremely well-engineered mountain bikes. I ride one myself, the Warden, and can speak to its quality. Brenda’s gravel bike rocks and we’re all jealous of her but I digress. The roads here suck and even Brenda on her Cache is feeling it.

We discover the sidewall of Dave’s brand new tire has been ripped open and, as a result, the tube inside has ballooned out and exploded. We need a new tire. We aren’t carrying a spare – an unfortunate oversight. Dave and I work on his wheel, tape the inside of the tire to act as a patch and use electrical tape to bind the tire together to the rim on the outside. It’s a piecemeal job but will hold for a few kilometres. There’s no bike shop in Liscannor and after the 15 minute hobble to the next town of Lahinch we find out there’s no bike shop there either. 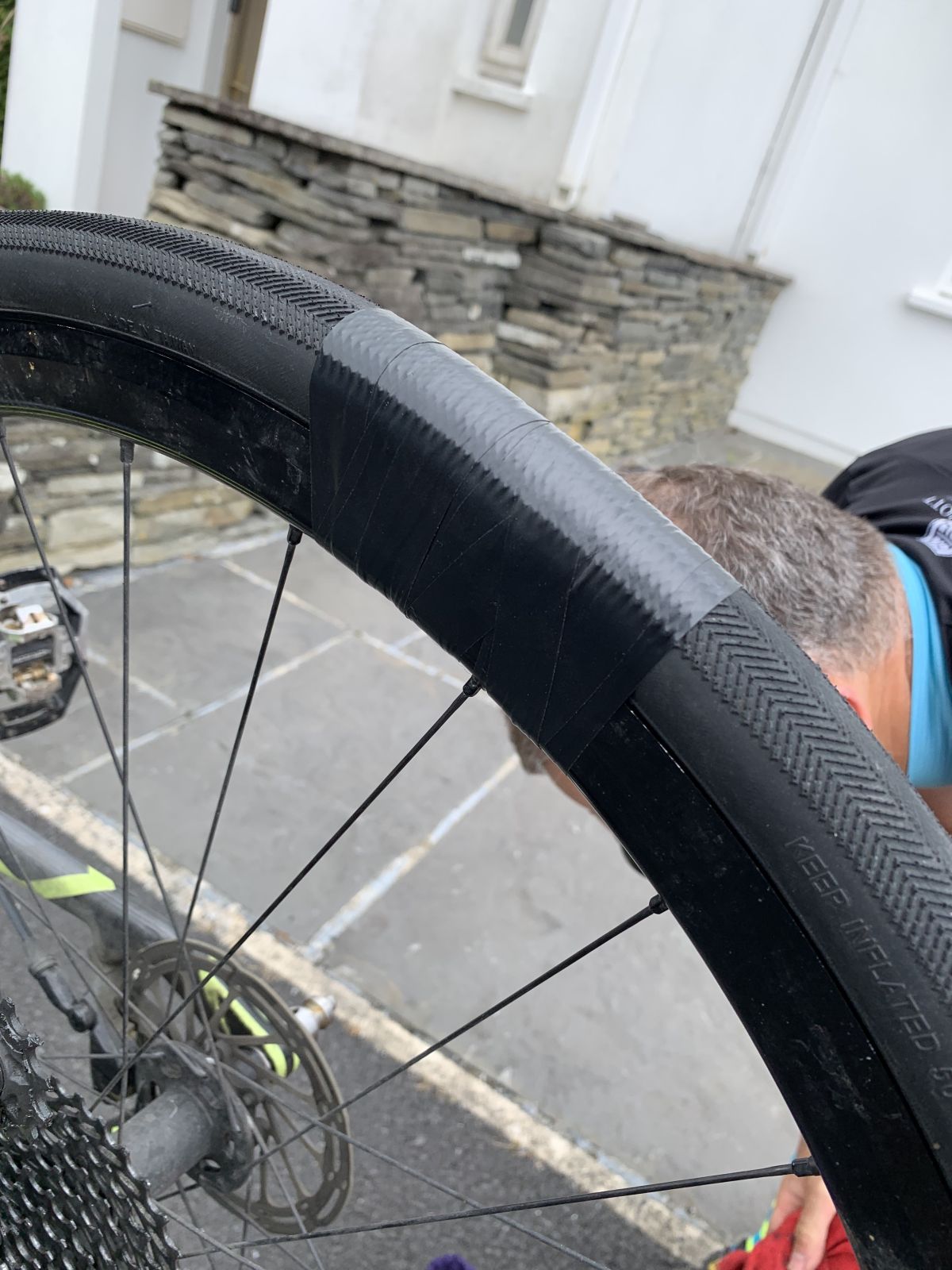 I walk into the local post office with our dilemma.

“I have an odd question for you,” I say to the woman behind the glass. “I’m on my bike and looking for a bike shop. I have a bit of an emergency. Do you know where the closest bicycle shop is?”

“The closest would be Doolin I’d imagine,” she replies. “It’s about 15-20 kilometres back.

“I know Doolin,” I say. “We camped there last night. The kids won’t be happy riding back.”

And so begins my story. The woman behind me in line waits patiently to mail her letter, as one does in a post office and bears witness to my story of kids, long miles and rain unfolding to the poor woman behind the desk.

“I’ll drive ye to Doolin,” replies the woman. “I live out that way. I’ll drive you back too.”

Her name is Claire Vessalo and she has a new home just outside of Liscannor. She’s originally from Dublin but now lives in Charleston, South Carolina. She spends about a third of the year in Ireland each year.

“Let’s drive by my newly renovated house,” she says, after I let her know I’m an architect. “It’s on our way.”

The drive to Doolin is taken on tiny roads for our benefit. Claire shares stories from the area and clearly is a proud member of this tiny community. 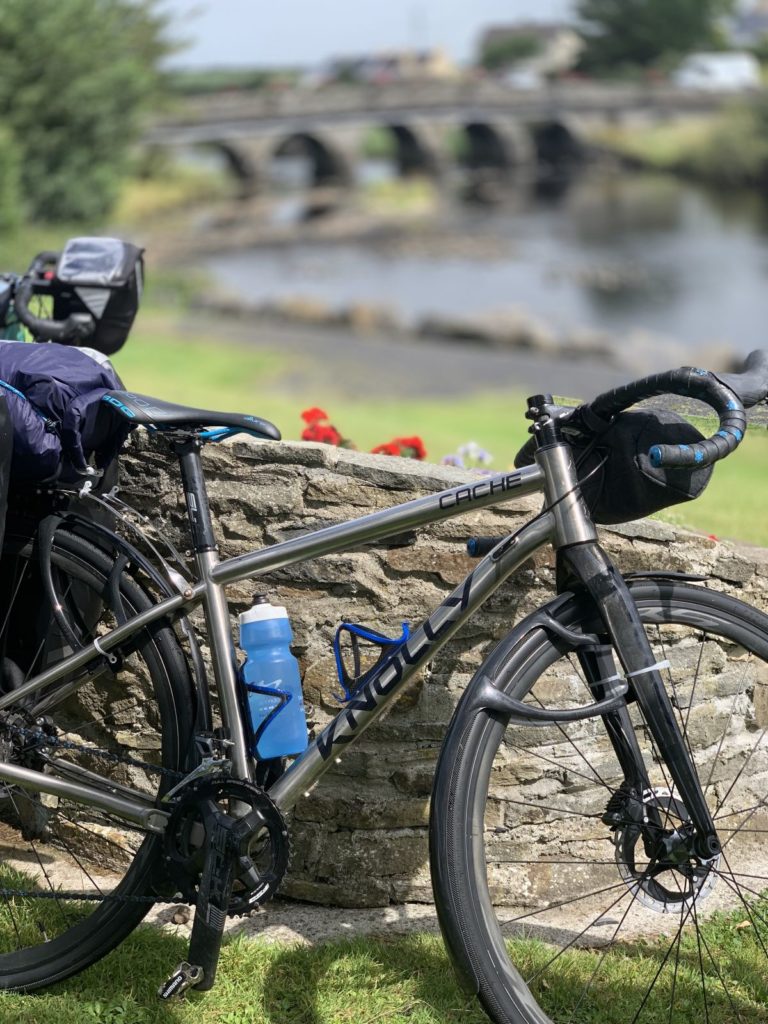 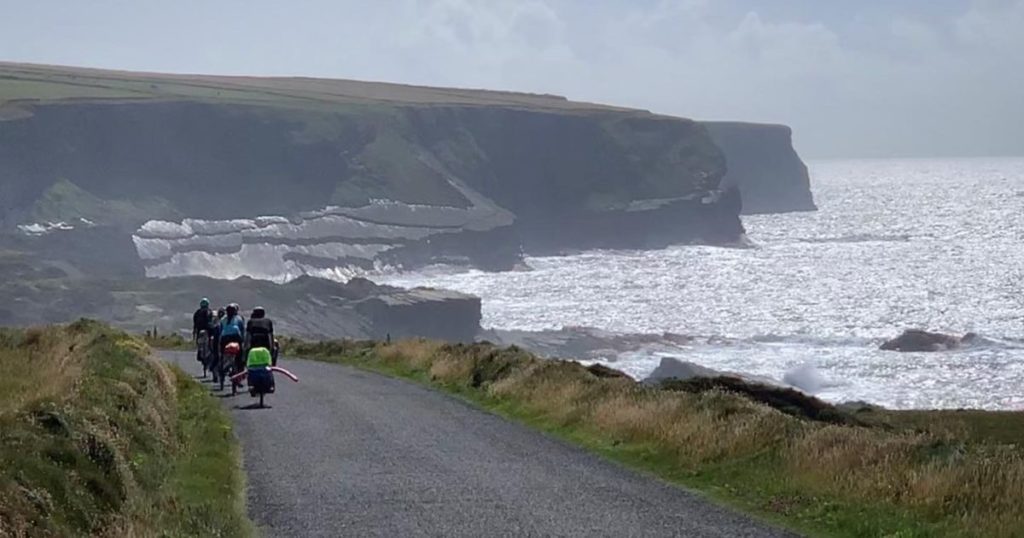 Riding along the Kilkee Cliffs. 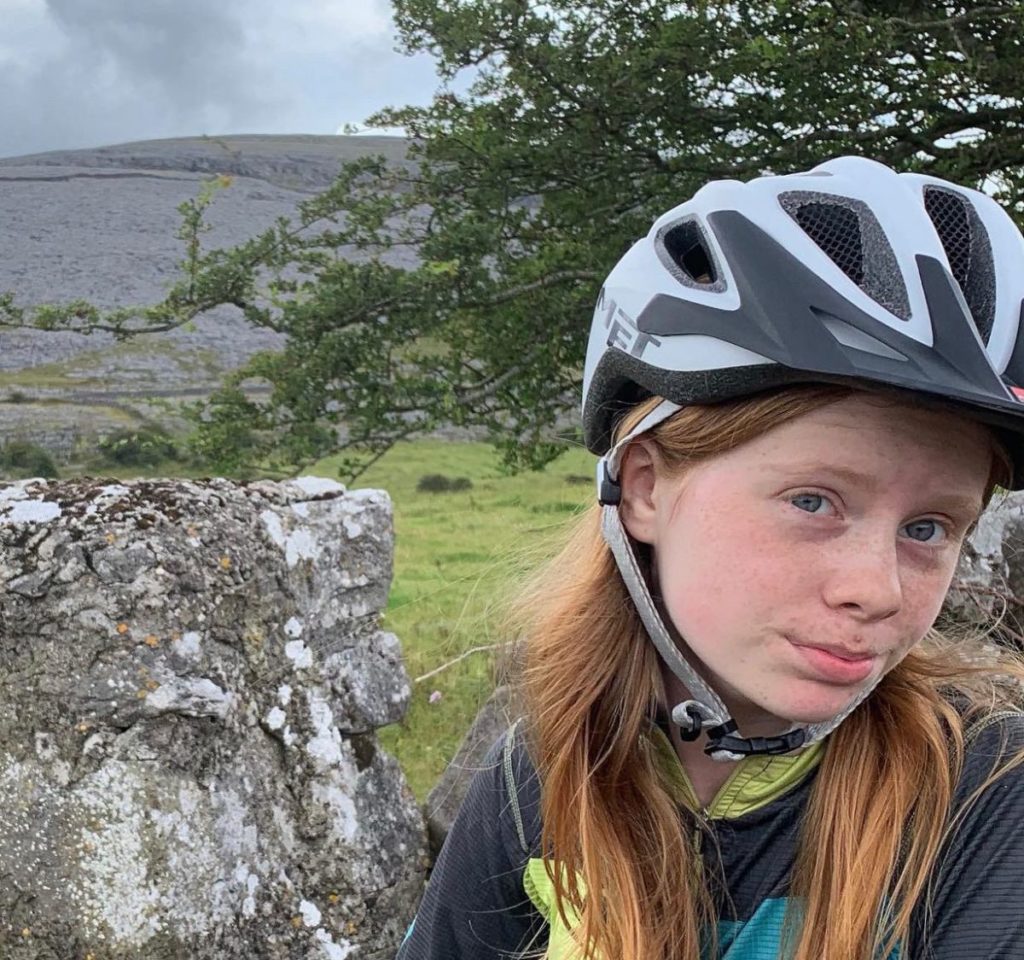 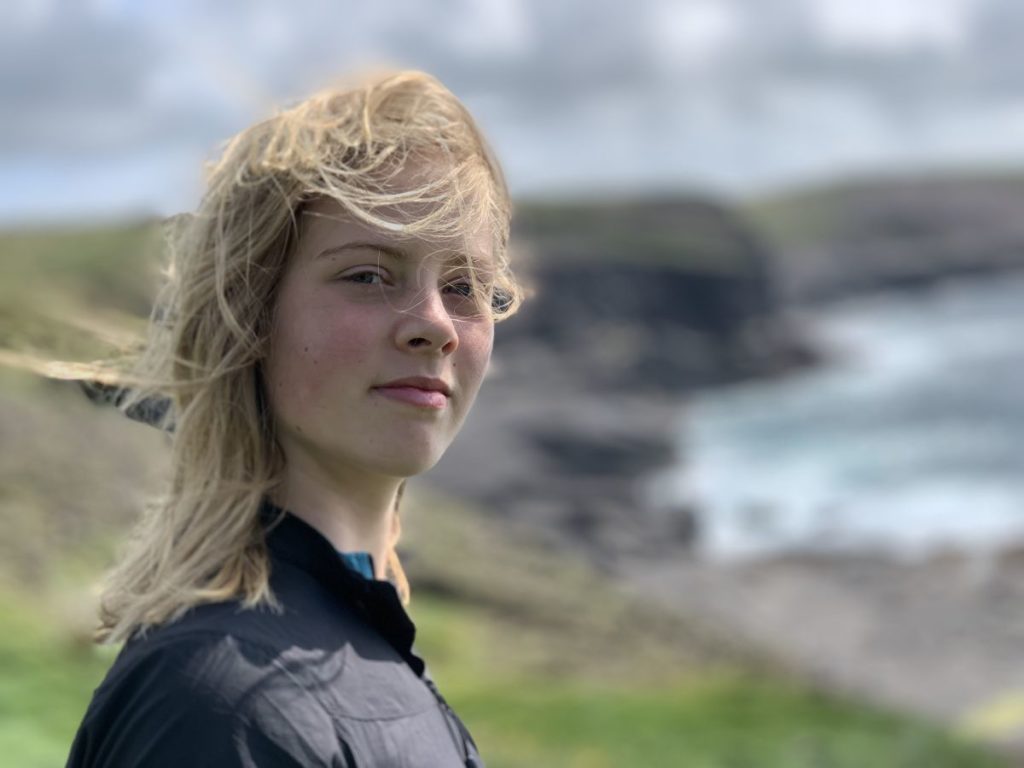 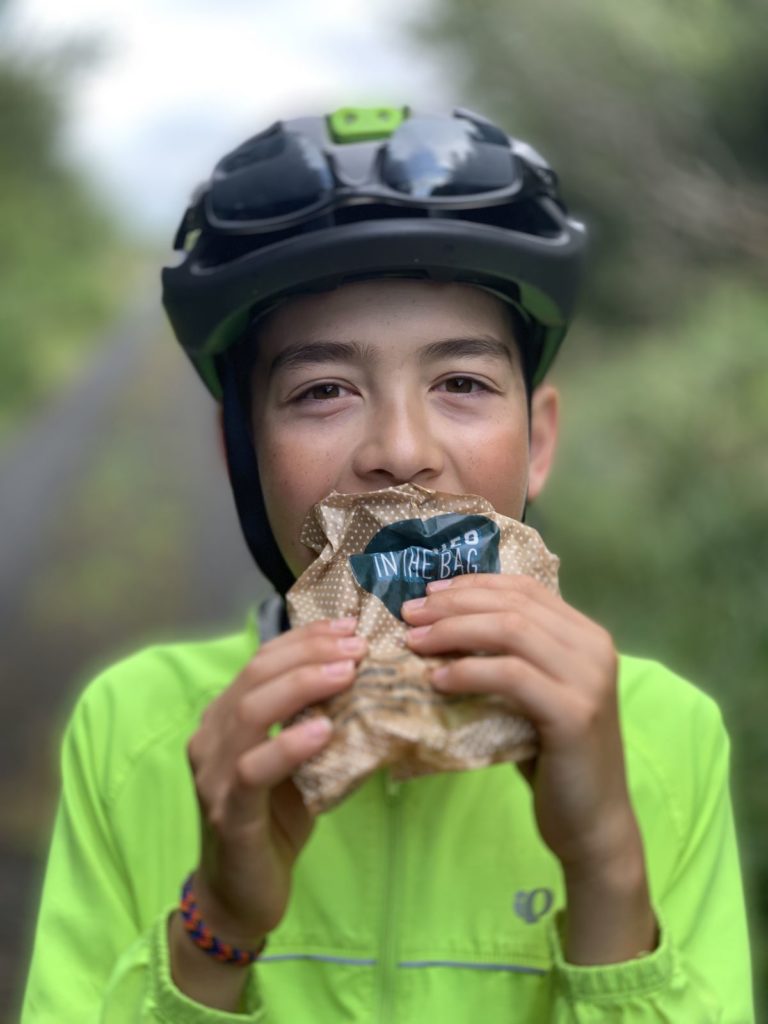 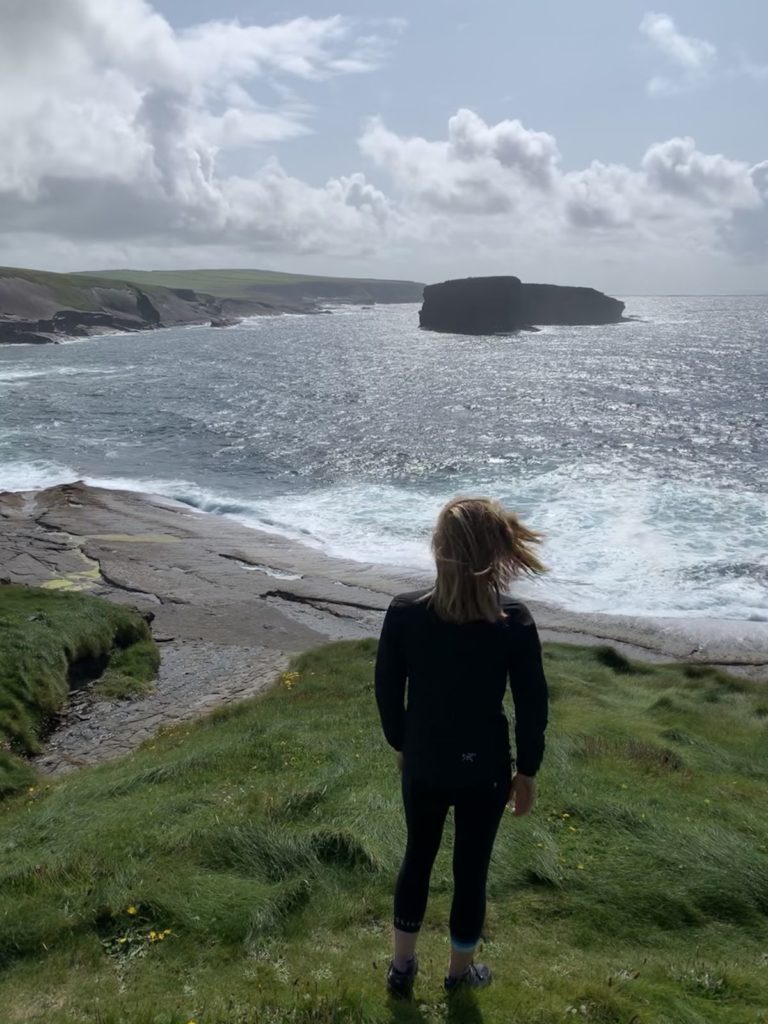 Caitlin on the Kilkee Cliffs 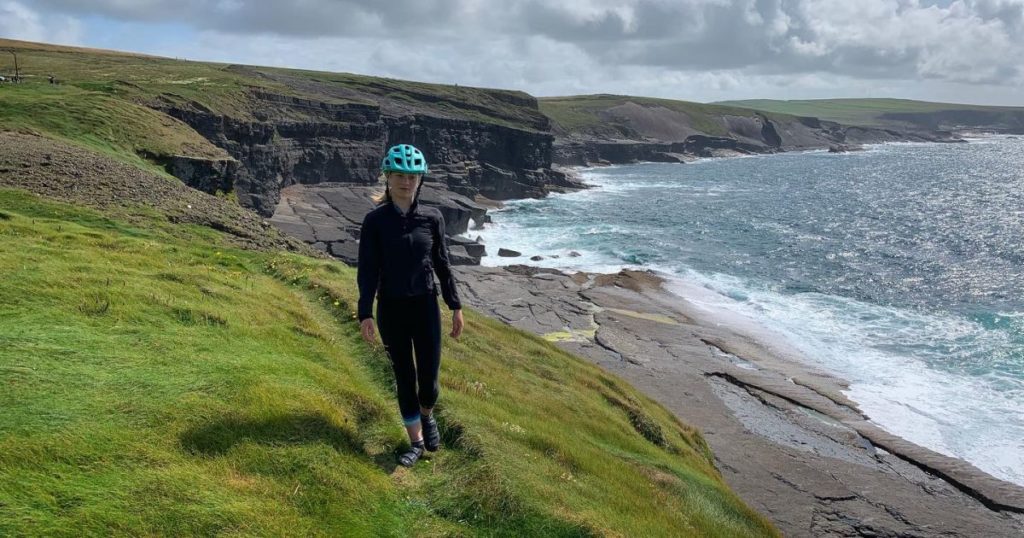 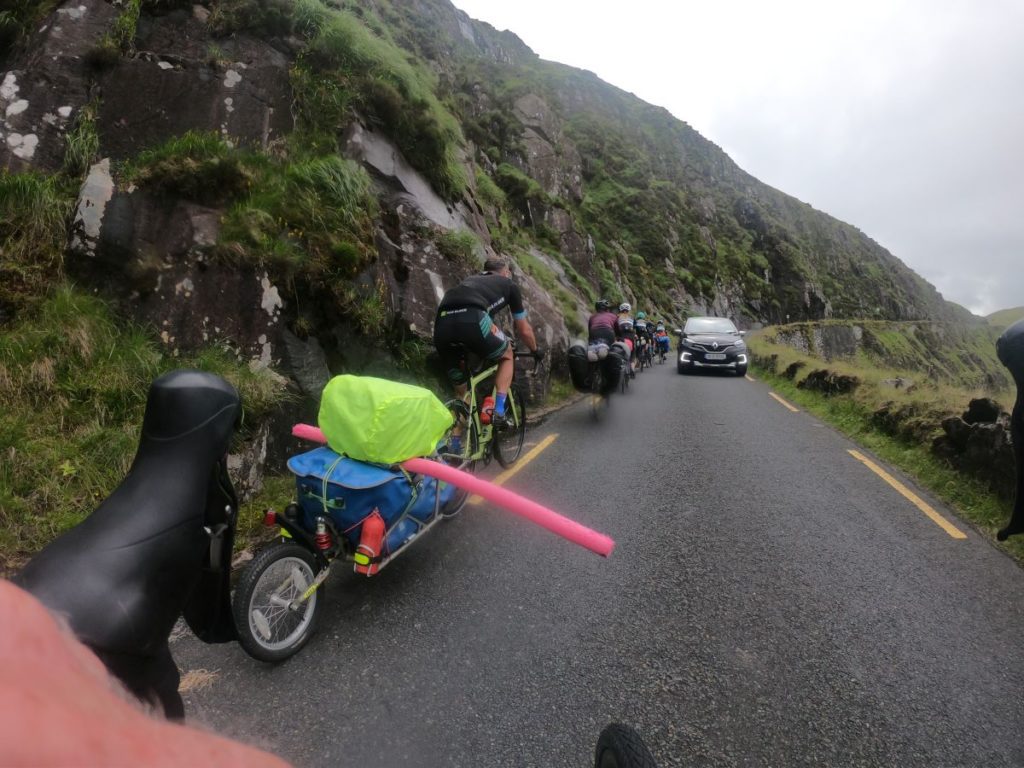 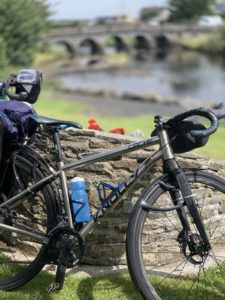 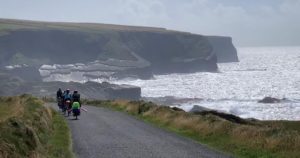 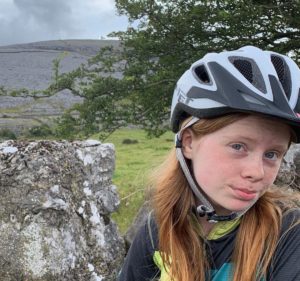 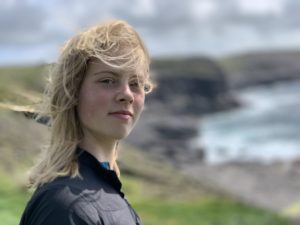 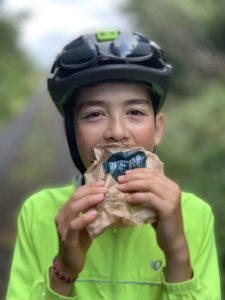 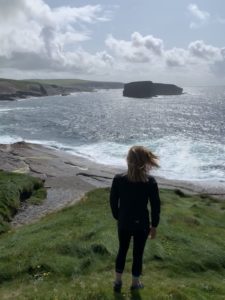 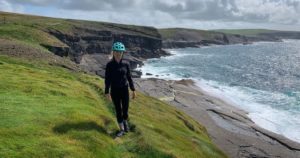 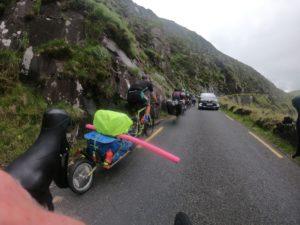 “I’ll never be a local though,” she says. “Always a Yank in their eyes.”

As we pass the Lahinch town sign on our way back she points something out.

“I do” I reply. “It’s smaller than the other letters.”

“I put it there,” she says. “For some reason they keep spelling Lahinch with an ‘E’ as Lehinch. Locals keep whiting out the ‘E’ and they replace the sign again. I put that ‘A’ in there. It’s a sticker.”

“Sounds like you’re a local after all,” laughs Dave.

“Maybe I am,” concedes Claire with a smile. “Maybe I am.”

Claire drives us back to town and drops us off exactly where we met. She took two hours out of her day to help a group of stranded cyclists and her reply to our fervent thank of gratitude?