Ireland isn’t considered a mountainous country by any stretch but what it lacks in sheer geographical enormity is amply made up in an undulant quantity. The hills here never end. For our crew of eight riding atop this sine curve of rough asphalt, it means a ceaseless supply of leg busting ascents as we make our way along Ireland’s rugged west coast. Road grades of 20 per cent or more are common and, on the two passes we’ve ascended so far, unrelenting. The pass through the Gap of Mamore had an average grade of 14.5 per cent with a cruel section of 22 per cent at its summit that made for moments of deep existential questioning by the end. 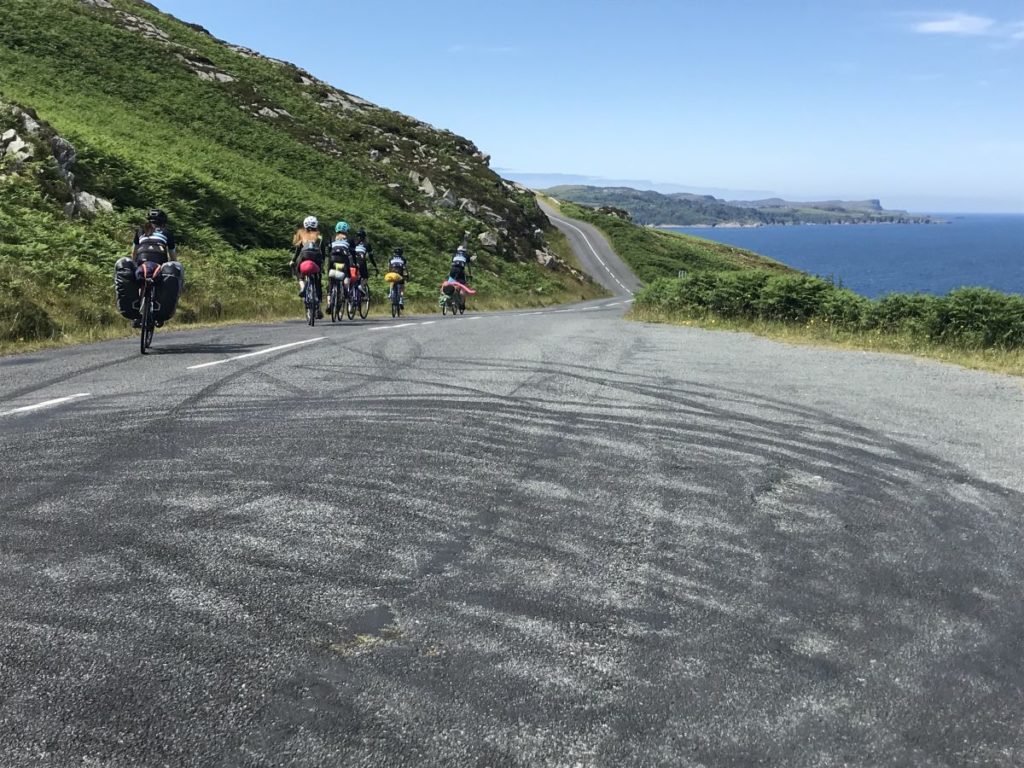 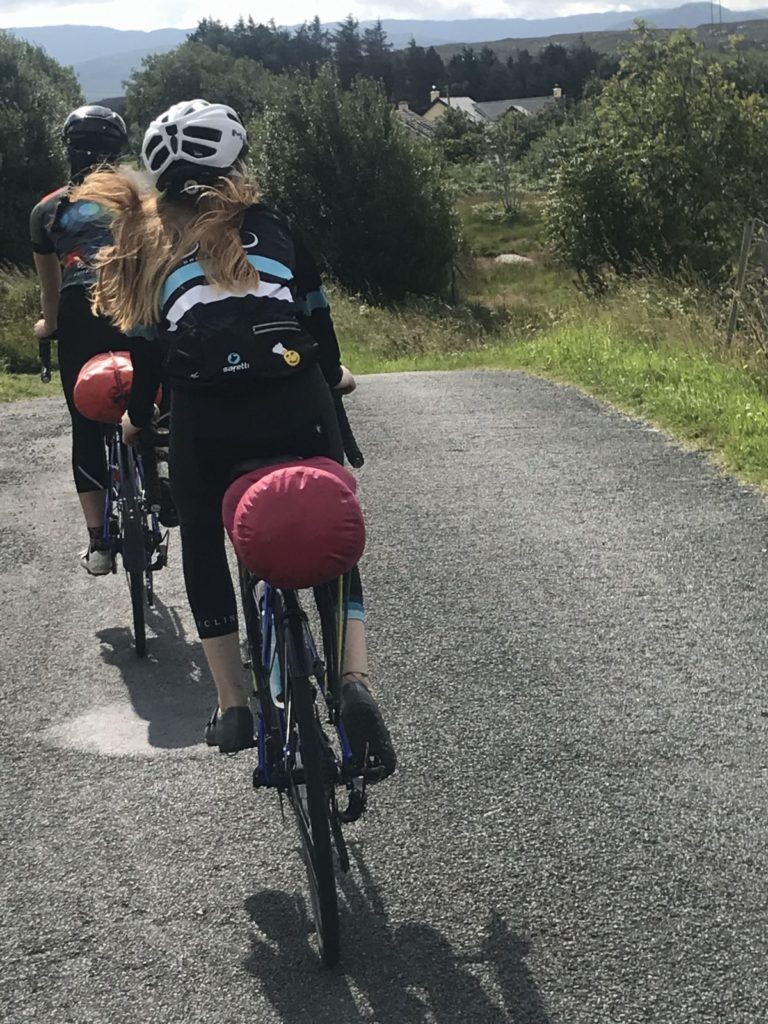 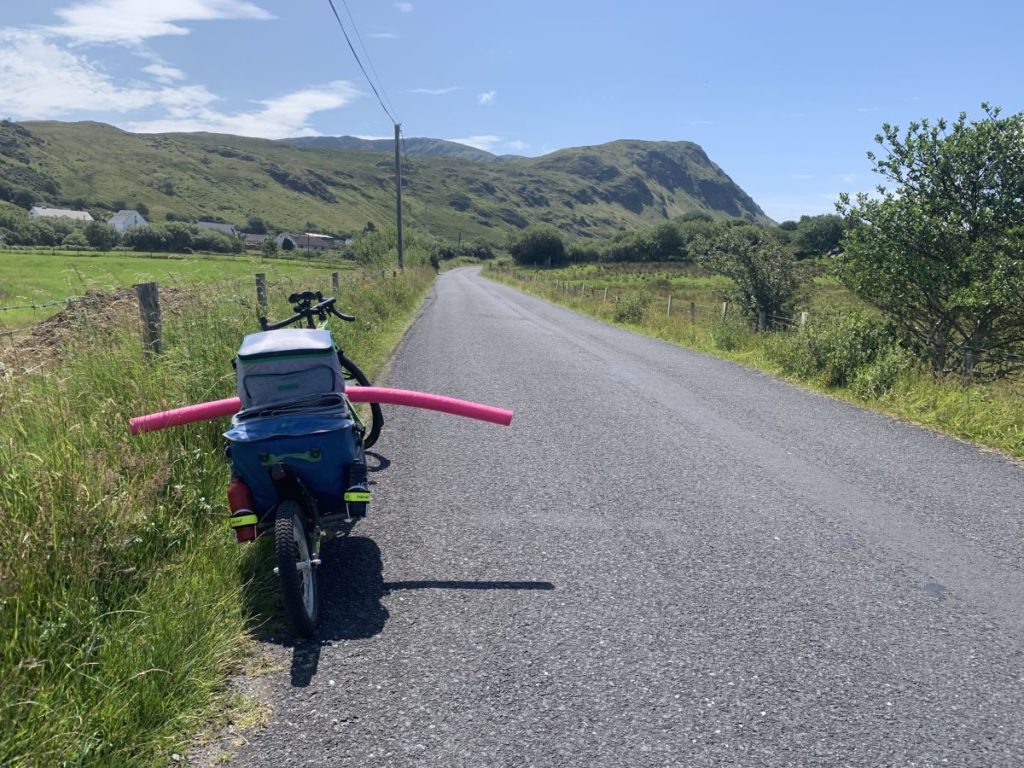 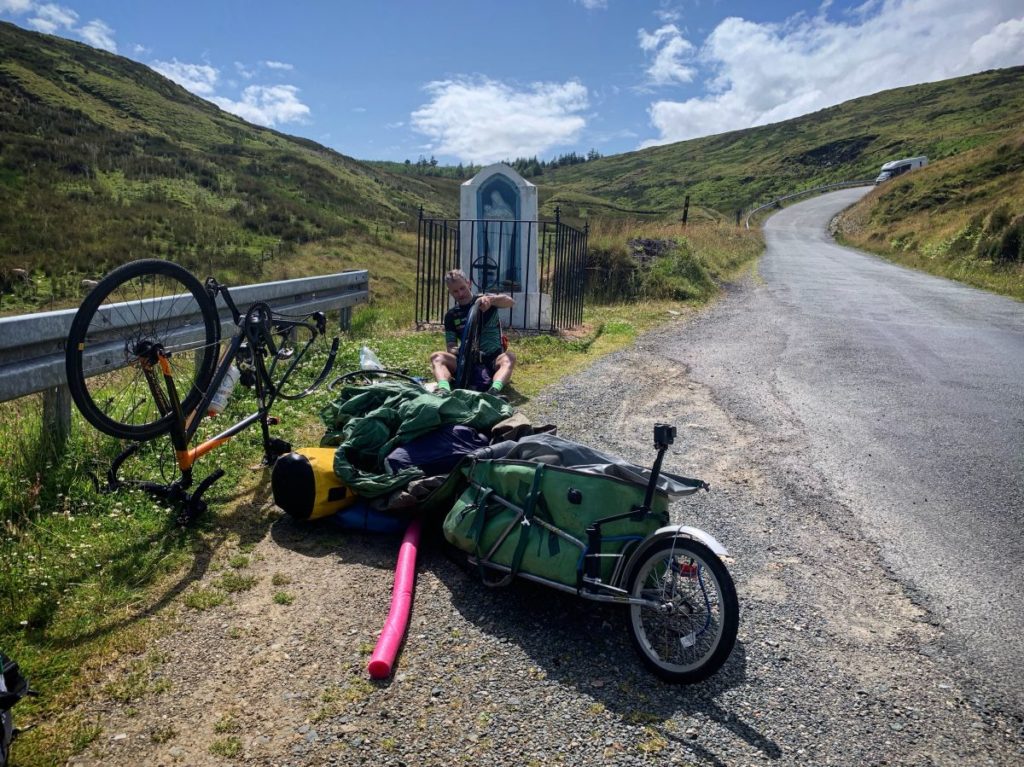 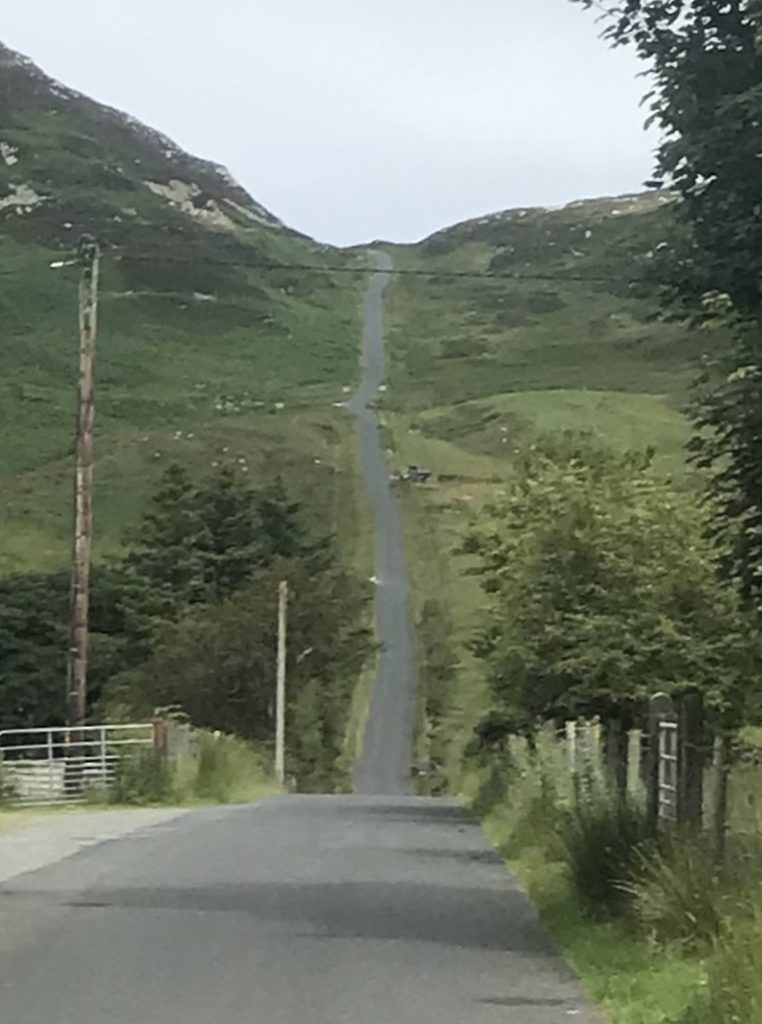 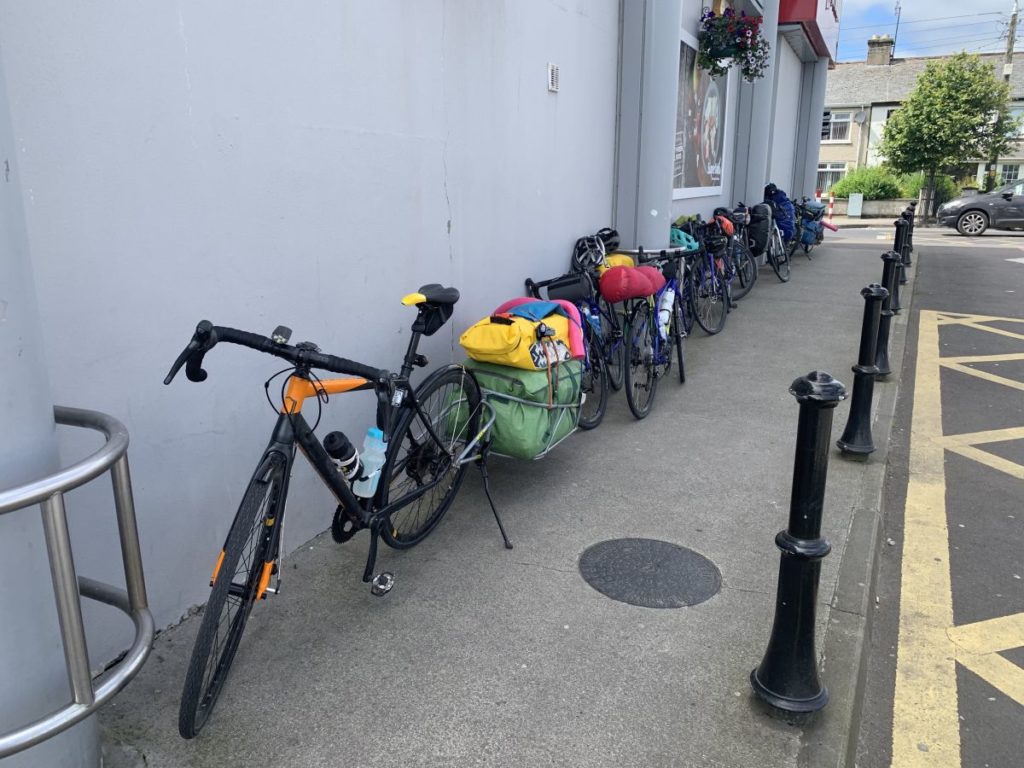 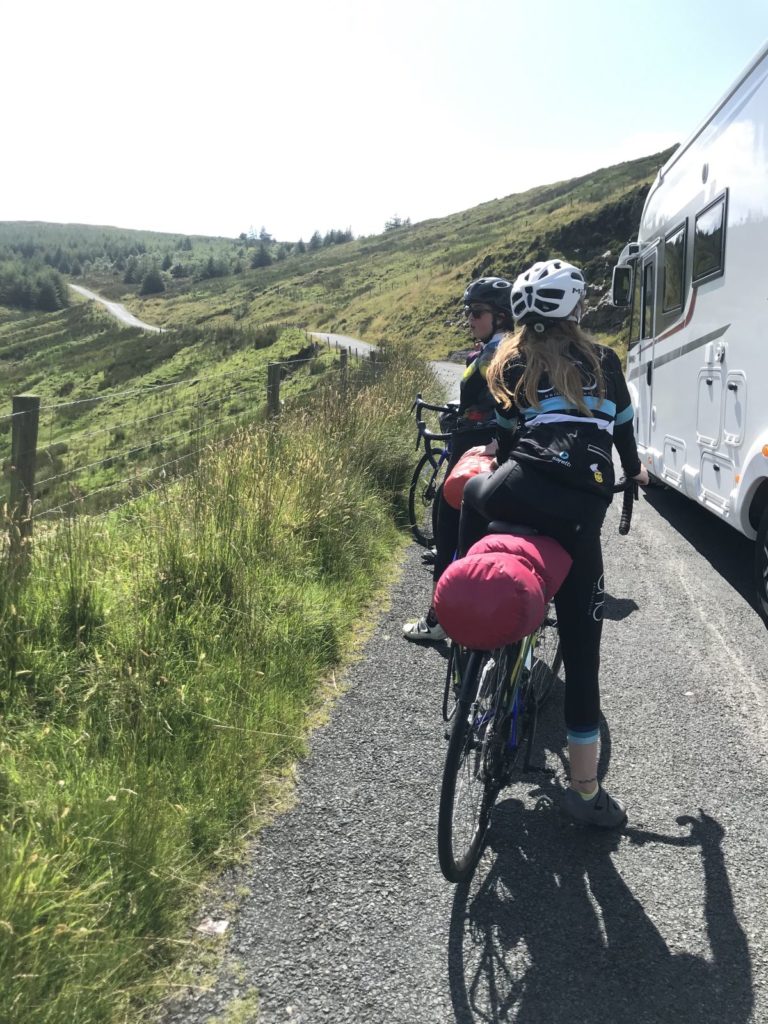 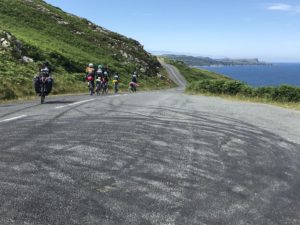 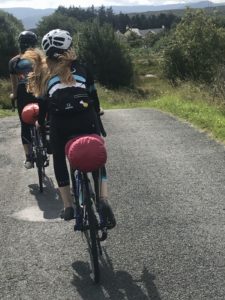 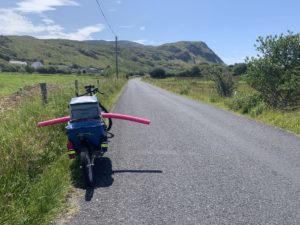 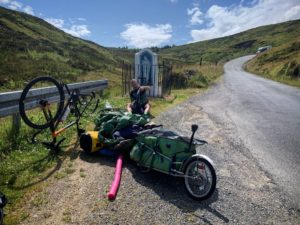 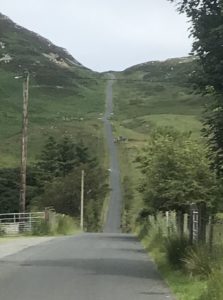 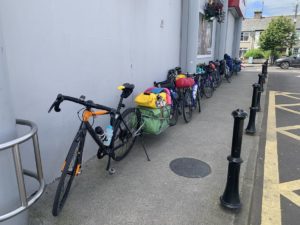 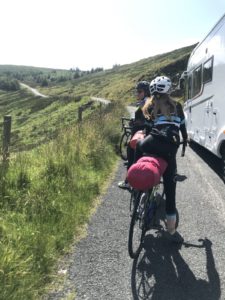 All of our bikes are heavily loaded with Dave and I pulling BOB trailers packed to the gills. These exquisite devices of torture are allowing us to carry over 100 lbs of gear and are as functional as they are pain-producing. Hauling one of these things up a fiercely steep gradient has us continuously expecting something to blow – a spoke, a chain, an artery. Halfway up the Glengesh Pass in County Donegal something did. Under normal circumstances, an exploding tire is met with curses of frustration, but on this nasty section the air hissing out of my rear tire was met with a massive sigh of relief. “Oh thank God!! I can stop!”

Our trailers draw a lot of attention when we stop in towns and, the Irish being a nation of friendly, talkative folk they are, makes for an easy excuse for a conversation.

“Fine size trailer you have there,” says a woman to Dave as we stop to buy food. I’d guess her to be in her early 70’s and is resplendent in her matching yellow blouse and pants.

My parents are from Limerick, Ireland and I know the idiosyncrasies of the Irish culture well. My father was fond of telling me the story of overhearing a man seeing another fall from a work ladder near Dublin’s O’Connell Bridge. “F**k!, the f**king f**ker’s f**ked!! Don’t be surprised about an informal turn of phrase if the atmosphere is right.