It’s been a month since I arrived in Belgium to join my Astana team for the Spring Classics for my first real European racing experience. Racing in Belgium brings with it a lot of changes but we also have a good mix of languages and cultures among the team, which makes for an even more international experience.

A large portion of the team are from Latin American. The Latin culture is pretty easy going as opposed to what I’ve seen in the U.S., here it’s very dynamic with music playing all the time, loud laughter, and very expressive and fast-paced conversations in Spanish.

On a normal training day, we usually get up around 8 or 9 a.m. I’m sharing a room with former junior ITT World Champion Elena Pirrone from Italy. She’s really funny and a good source of information for me since she can speak decent English. We know when the girls in the Spanish room wake up because they will put on some Latin music, loud enough that everyone can hear and start the dance!

The kitchen is quite small, but space is a luxury only North American’s seems to care about. Dobroye utro (good morning in Russian), buongiorno, or buenos dias, depending! There is cheese and ham on the counter, a bag of sugar, cookies and rusk biscuits, and some more sugary food.

I bring my own peanut butter and oats, for which they gave me a look at first, like I’m eating strange food. But that was until I taught them the banana and oats pancake (that became famous after Leah Kirchman published it). Now they’re all crazy about it! After breakfast, we go for a ride at 10 a.m. But it means more like “we walk out of our bedroom” at 10! No stress.

We’ve been really lucky with the weather this spring, it’s been sunny most of the time since I arrived. I’m surprised that it’s still so cold though. Every day is full winter clothes, and often I come back with frozen feet and hands no matter what I wear. Where did my Canadian blood go? A year ago at this time, I was trying to acclimate to the heat of Tucson, on a bike path the size of a car lane and now I’m freezing on a road the size of a bike lane. The country roads are very narrow but it’s quite charming. The fields of agriculture seem endless, with some cows and goats here and there. Having grown up on a dairy farm, it reminds me of the views at home. 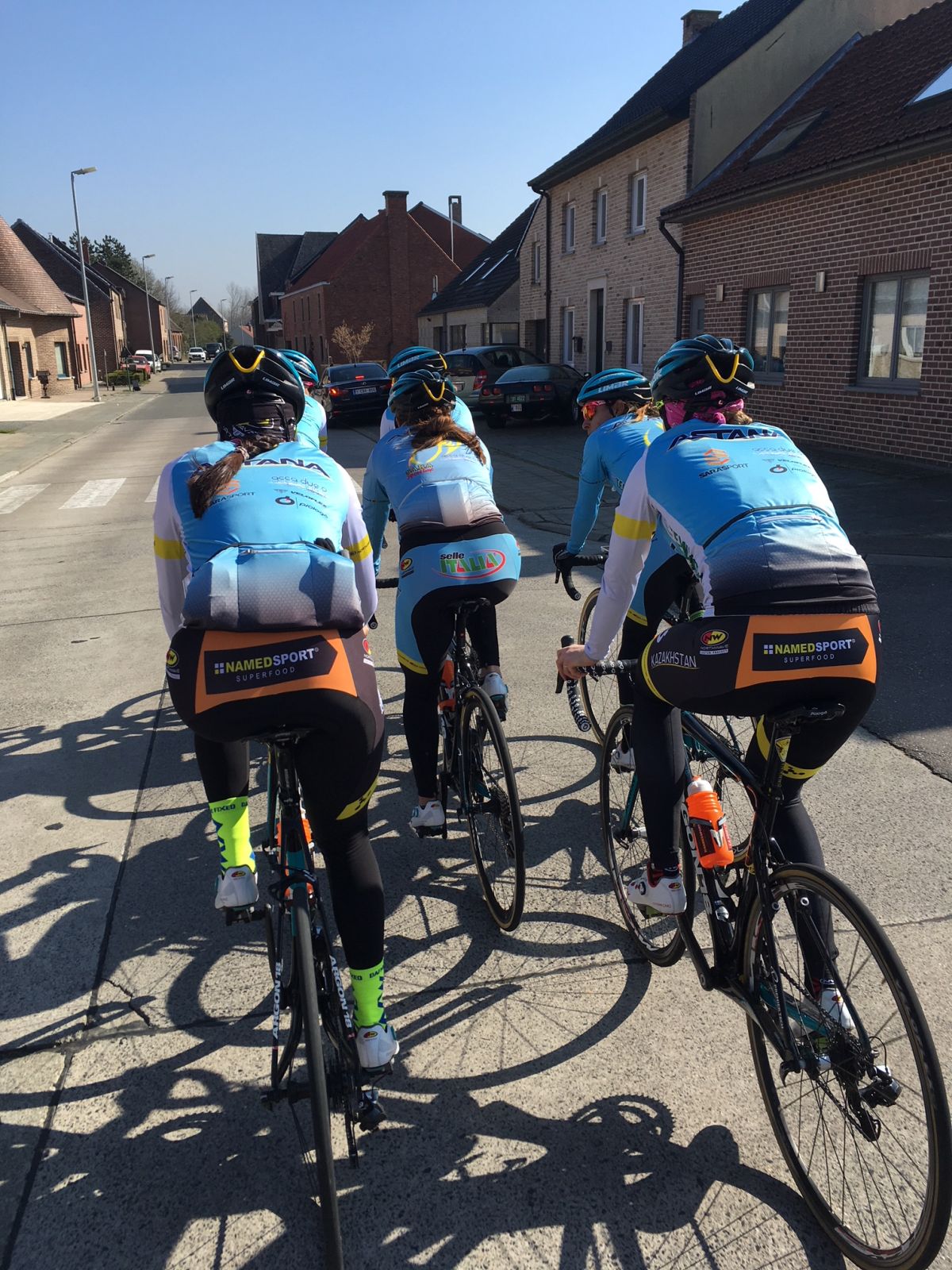 When we get back, there is cooked pasta on the table, more ham and of course more cheese again. I see olive oil being poured like it’s a pasta sauce! Calories flow and no one counts. It’s so different than what I’ve seen with North-American riders, but it’s cool to see both worlds and to get some perspective.

After lunch it’s downtime, massages and nap. Then the action picks up again around 7 or 8 p.m. during dinner, which often turns into a half-chaos in the small kitchen with five languages being spoken: Spanish, Italian, Russian, Kazakh and English, and a Latin party kind of vibe.

Even at the races you can feel the energy from our team tent. There is always music playing and it’s not rare to see the girls dancing before the race. Our director translates in English for me during the team meeting but some things seem to slip through the cracks sometimes. That’s just to spice the challenge.

Marie-Soleil Blais is a first-year professional with Astana Women’s Team from the Centre-du-Québec. She’s a seven-time Quebec champion on the road and track.