It thunder stormed through the night. I clambered out of my tent at about one in the morning between downpours to relieve myself. To the west sheet lightning provided a mesmerizing light show over the mountain range in Glacier National Park, our destination later that day.

We were camped at St Mary, Montana having crossed the US border a few hours earlier. We had biked south from Waterton Lakes National Park in southern Alberta. Waterton and Glacier are divided by an international border but are a large integrated eco-system. They were named the world’s first international peace park in 1932 and in 1995 the dual parks were designated as a World Heritage Site.

Our route was the Sun Road crossing Logan Pass, the Continental Divide, at an elevation of 2025 meters. The ascent is 12 km with an average gradient of 5 per cent.  Because part of the road is closed to cyclists between 11am and 4pm we had risen extra early. I was packing up my tent and gear at 4:30am.

We set off in the cool morning air at the first glimmer of light in the east. The storm clouds had passed, but the air was moist with a lingering mist. A slow trickle of cars were already passing us, getting a jump on the heavy tourist traffic to come. Clouds enveloped the towering mountains like white fungus. At times the mist became a thick fog limiting our vision to about two meters. Even so, the grandeur of our surroundings, the majestic rock faces towering to our left, the penetrating aroma of pine, the glimpses of lakes shimmering under the gauzy brume lifted our spirits.

I had expected the climb to be hard, but the switchbacks didn’t throw sharp gradient surprises at us. A steady, sustainable pace got me to the top a half-hour earlier than I anticipated. I had been told the views from there would be spectacular, among the most scenic in the States. I was disappointed. I could barely see my hand in front of my face. The disappointment was short lived. Within minutes of starting the descent we had passed startlingly from one micro-climate to a completely different one. Mist and cloud to sun and blue skies. It was spectacular; every bit as much as crossing the Rockies on the Icefields Parkway.

The Sun Road was the second big climb of the week. Three days earlier we had climbed to the summit of Highwood Pass, the highest paved road in Canada, Highway 40 in Kananaskis County. It tops out at 2206 meters. That was a tougher  day, the climb interspersed with those steep ramps of 6 to 7 per cent gradients that take it out of you.

Climbing seemed to have defined many of our days.  Those grinding slogs were often the ones that stuck for days in our memory and certainly left their mark on our calves and quads.  The memory of past ascents tinges our thoughts of what’s to come. Every day we scour the Ride With GPS elevation profile of our route. At dinner we sit around like old timers on a country store veranda making insightful remarks like, “oh, yeah that’s going to be a toughie.” The next evening we’d continue the conversation. “Oh, yeah, that was a toughie.” 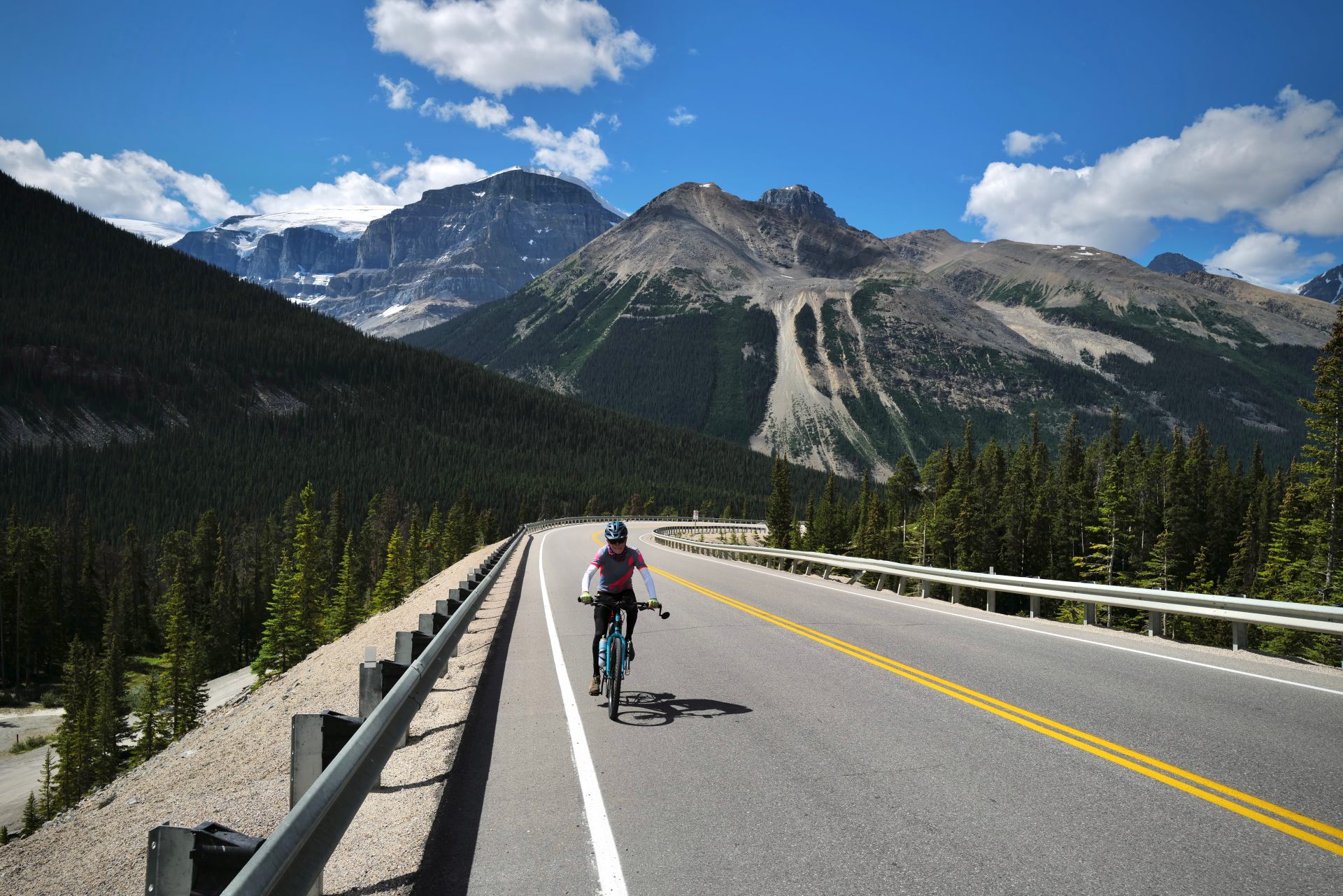 For some reason the worst of the climbs seemed to come on us after a long day in the saddle, a final trial before hitting camp. About ten days ago we had a relatively short day of it, only 92 km, from Kakwa River to Grande Cache, Alberta. But it included 1,400 meters of climbing, the hardest of which was the last five and a half km: 311 meters of climbing with an average gradient of 6 per cent.

I was pretty spent by the time I reached the bottom of the hill. My legs were dead weights hanging from concrete hips. It was all I could do to keep the pedals turning. Everyone has their own strategy for times like this.  I give myself pep talks. “Hey, Tom you can do this.” When that doesn’t work I threaten myself with dire consequences if I don’t make it to the top. Anything to get it done. So far, it’s worked.

There was a Petro-Canada station with a convenience store at the summit. I stopped in to get a cold drink. A man, who’d pulled into the pumps approached me, “Did you just bike up that hill?” “Yep,” I said. He took a step back, as if I were a contagion. “Man, you’re crazy,” he said. I was suffused with a warm glow of pride.