BCBR’s Gravel Explorer started as it finished: Andrew L’Esperance and Rob Britton sprinting for the win. This, despite long days and wildly varied terrain ranging from very rough gravel to smoother, speedier days in the Okanagan.

The fast finish ends a long week of racing from Naramata to Okanagan Falls. While a trio of men battled at the front, the women’s race was a week-long campaign by Cynthia Frazier to unseat reigning Gravel Explorer champ, Amity Rockwell

On Stage 1,  Britton (Easton Overland) just edged out L’Esperance (Maxxis Factory Team) to take the win on a false-flat downhill section of the Kettle Valley Railway (KVR). L’Esperance responded on Stage 2, fighting back to take the win and, over the following days, to steadily build a lead in the overall.

Between Stage 1, which took a back route from Naramata to the edge of Kelowna before looping back to the finish line, and Stage 5 in Summerland, Britton, L’Esperance and Cory Wallace (Kona) would trade wins on the men’s side.

The final day of racing again ended in a sprint finish. Again it was Britton, a former pro road racer, taking the win. “Rob just has too much experience on the road for me to get him in a sprint like that,” L’Esperance said after the finish line. Despite Britton taking the final win, L’Esperance holds on to win the Gravel Explorer overall. The win extends his streak of BCBR stage race victories. In 2021 he won the BC Bike Race mountain bike event in his first appearance.

Cory Wallace finishes third overall, even stealing a stage win from the Britton and L’Esperance, despite the two leaders occasionally working together to create an advantage before settling the stage wins via sprints.

“Once those guys start working together, it’s game over for me,” Wallace said of the leader’s strategy. The result caps off a wild 2022 for the Jasper, Alta. racer that started with a bikepacking adventure on the African continent, including an FKT ride up to Mount Kilimanjaro. 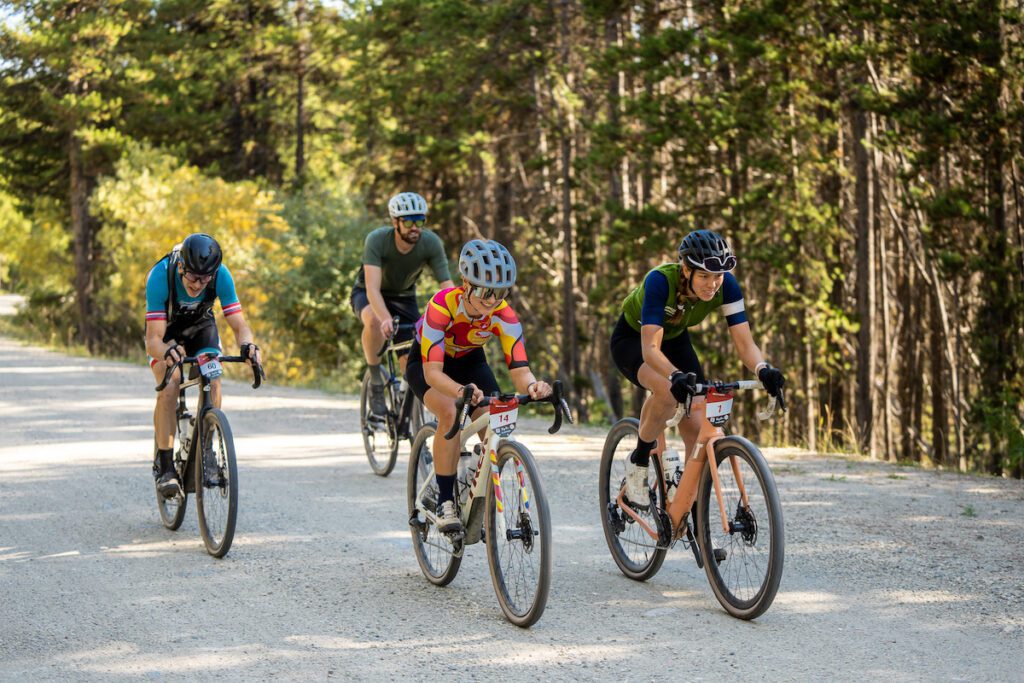 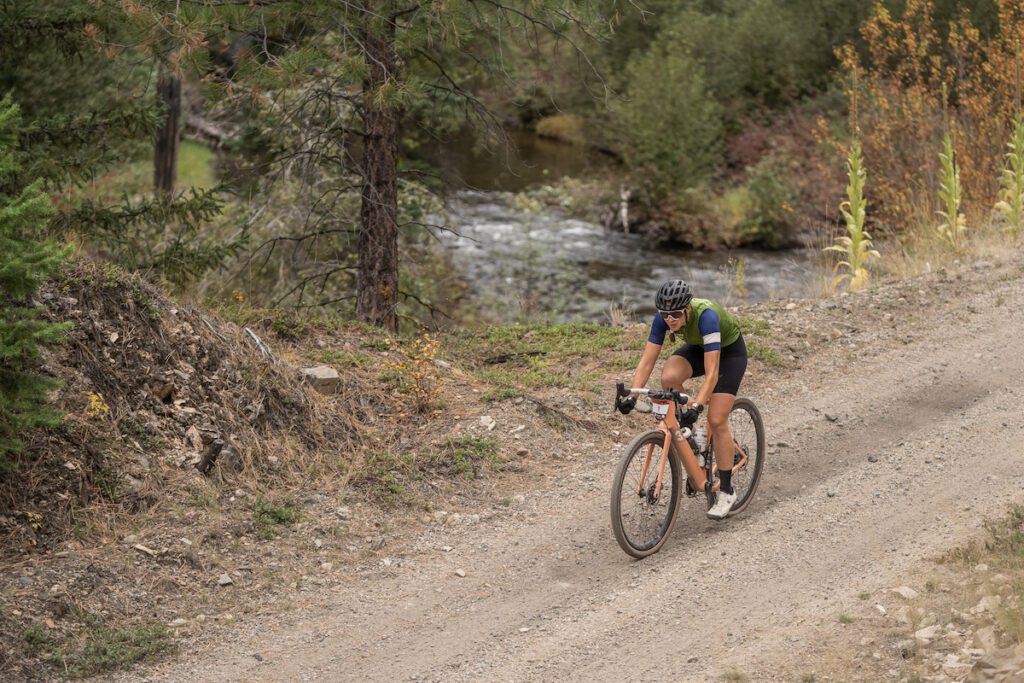 Frazier out on her own on the final race day in Summerland. Photo: Chris Stenberg 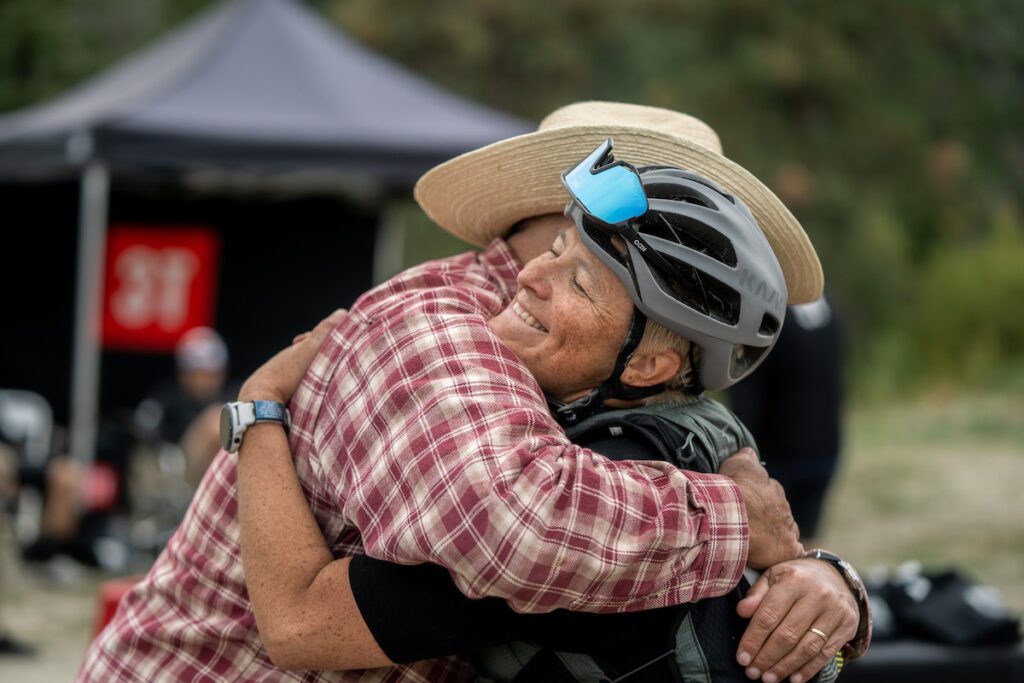 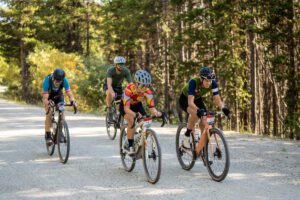 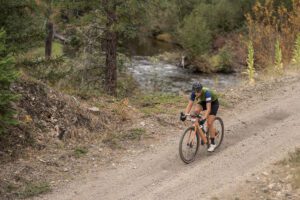 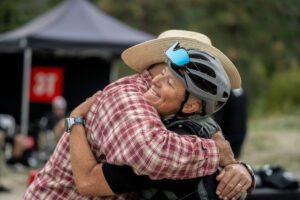 On the women’s side, it was ultra-endurance racer Cynthia Frazier (3T) leading the five-day Gravel Explorer. Hot off an appearance at Spain’s 750-km Badlands race, Frazier cranked up the speed to sweep all five race stages in the Okanagan.

“I’m coming in off some long races, and I usually take a while to get warmed up,” Frazier said after her first stage win on Sunday, adding “750km is not necessarily the best training for a five-day stage race. These short days aren’t always good for me, but today worked out pretty well.” The long-race lead in paid off for Frazier, as the rest of the week went alright, too.

Rockwell was one of the few riders to attempt the BC Bike Race mountain bike and Gravel Explorer double, 12 stages of racing across 14 days in the Okanagan. It’s an impressive feat, especially since Rockwell was still able to push, but not pass, Frazier all week.

This is the second year of Gravel Explorer racing in the Okanagan. The first year featured a hefty dose of singltrack in with the gravel roads. For year two the singletrack sections were reduced, and a single-day Gravel Explorer LT option was added, but the full course offered a different kind of challenge. Far from being easy, the first two stages served up substantial miles and challenging courses, climbing and descending. After that, a smoother selection of the South Okanagan’s best, and least known back roads presented a faster challenge to racers, though there was still hefty servings of elevation gain and loss.

“I’m originally from Enderby, so I know the area quite well, or at least I thought I did,” said local racer Corey Wallis. “I couldn’t believe the routes we rode over the past five days. I didn’t know there was so many different amazing gravel routes here.”

With 10 days of racing on 10 different courses over two years, the Gravel Explorer route – like the sport itself – continues to evolve. Preparations for 2023’s event are already underway.