When Cannondale originally launched the Topstone Carbon last year we were impressed with the bikes off road capabilities and even mused about what the bike could be like with a front suspension fork. Fast forward one year later and we no longer have to wonder—Cannondale gave us ‘the Lefty’, a Topstone Carbon sporting 30 mm of front gravel eating travel to match the 30 mm offered in the rear thanks to the KingPin suspension design.

The Topstone Carbon Lefty takes the playful, genre-blurring spirit of the Cannondale Slate and pushes it to a whole new level by adding the all-new, built for gravel Lefty Oliver fork. While gravel bikes with front suspension have been built by a number of intrepid gravel riders, only a few brands have released a bike specifically made with front suspension (notably Sargen’s Lavarg and the Lauf Grit).

The Topstone Lefty uses Cannondale’s proprietary KingPin rear suspension system complemented with the new gravel-specific Lefty Oliver fork and fat 650b wheels to create a new kind of gravel bike that pushes the boundaries of gravel. Internal dropper post compatibility, many gear and storage mounts, a removable fender bridge and big tire clearance make the bike easily modifiable for a variety of riders.

Cannondale describes the bike as a cousin to the burlier XC racing Lefty Ocho, with whom it shares the same type of needle bearing internals that give 30 mm of bump-smoothing travel. It features an easy-to-use lockout with a blow off circuit, so it can still absorb impacts even when locked. Lefty Oliver has a tool-free, StopLock brake mount, designed for flat mount calipers, that help when removing the front wheel. It’s designed to allow 47 mm 650b tires or 45 mm 700c tires and comes in at 1,340 g for the carbon and 1,610 g for the alloy. 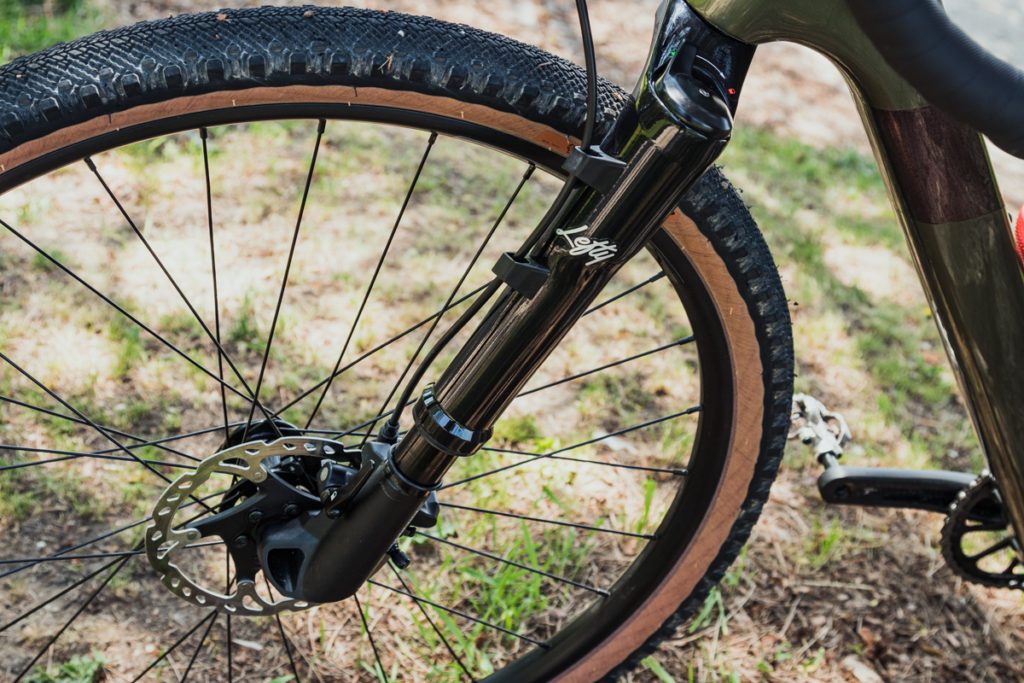 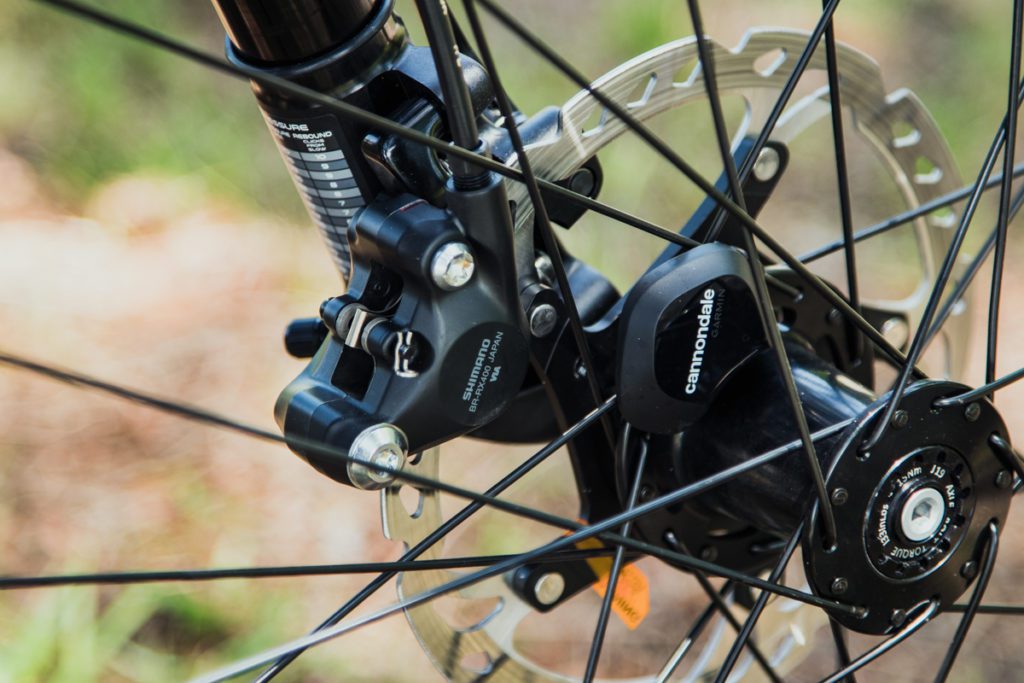 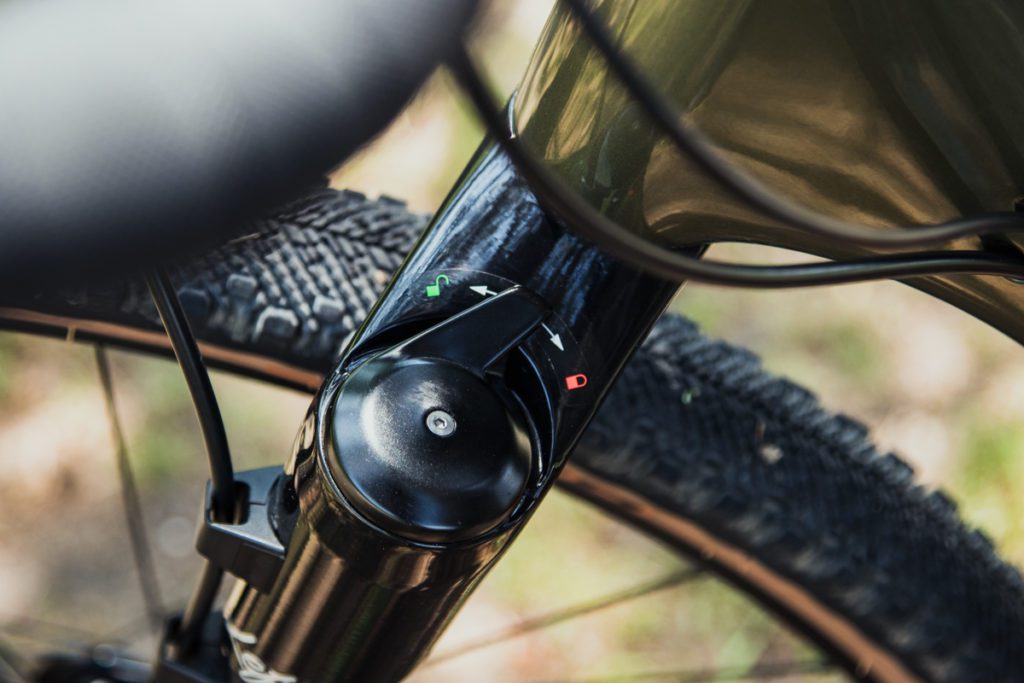 lockout with a blow off circuit 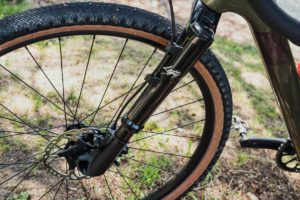 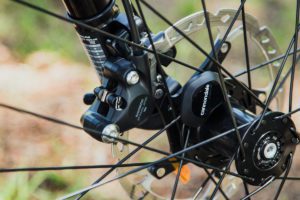 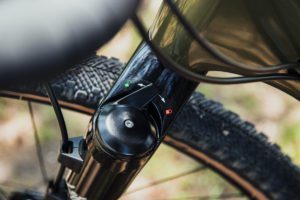 To upgrade a bike to the Lefty Oliver fork cyclists will also need a wheel with the Lefty 50 hub. 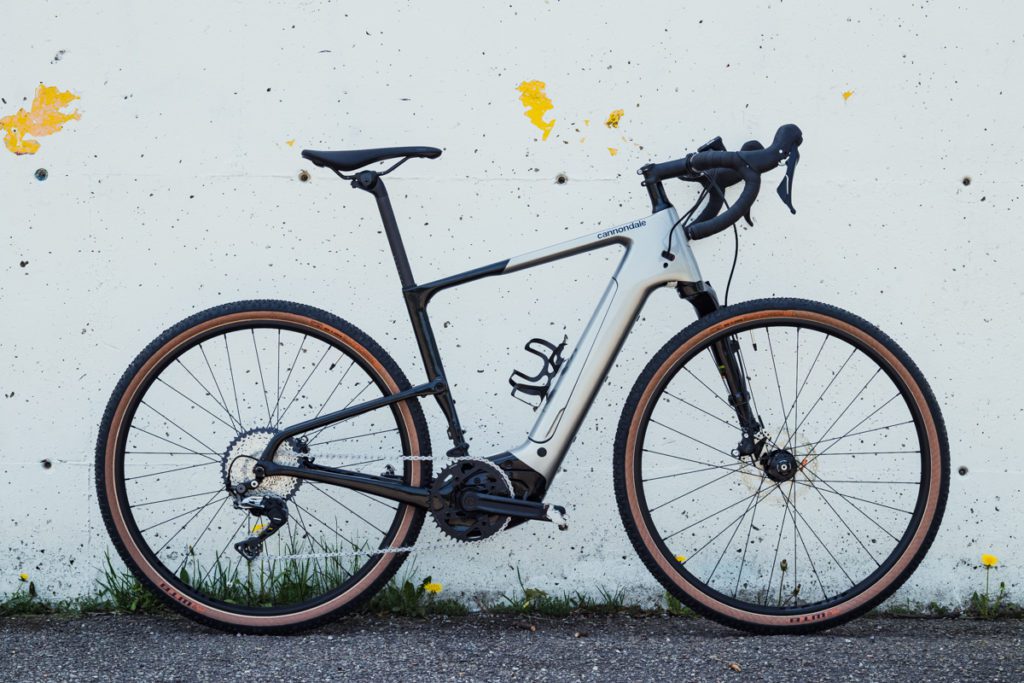 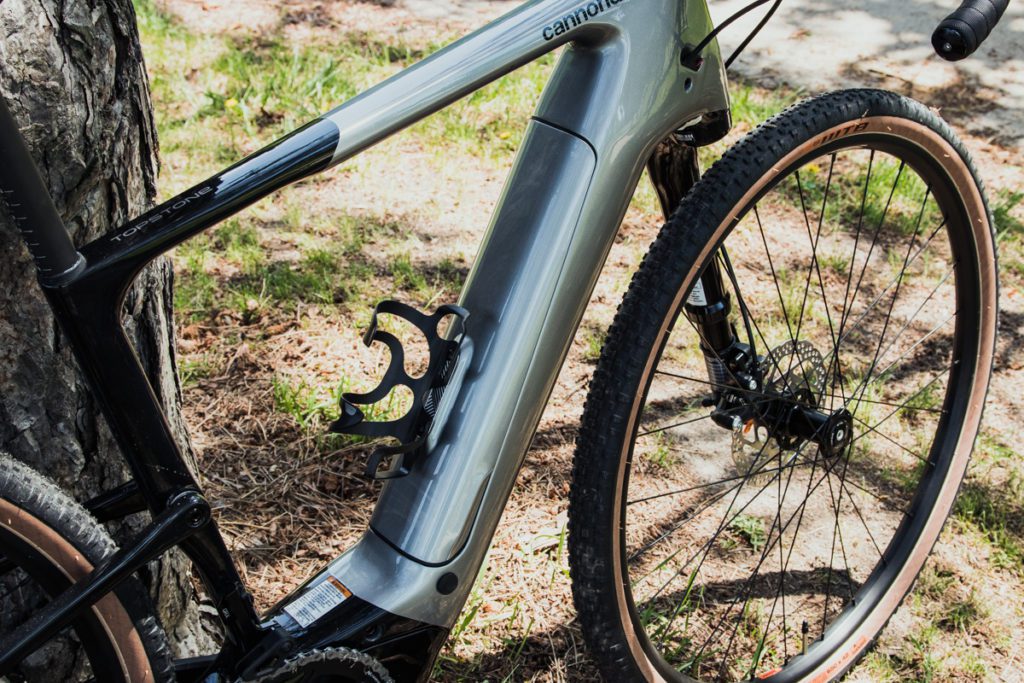 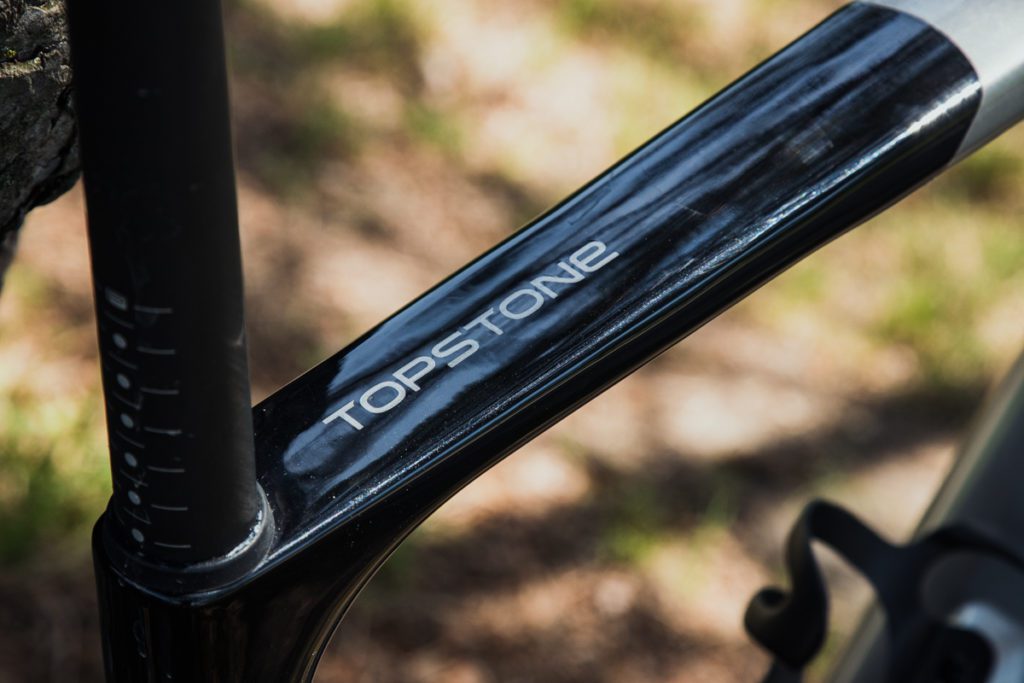 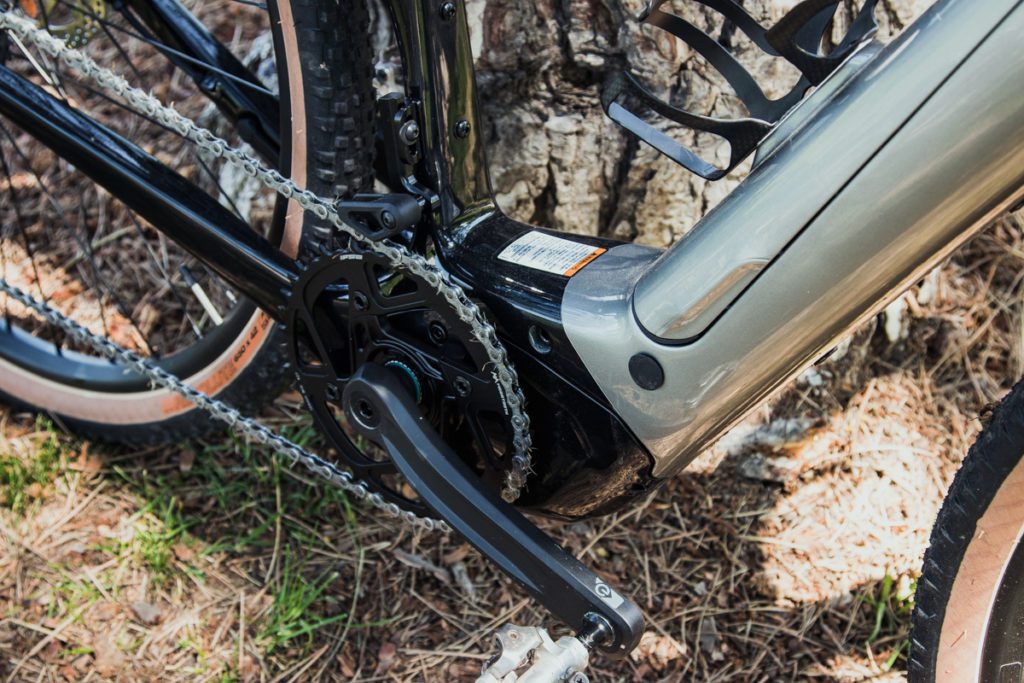 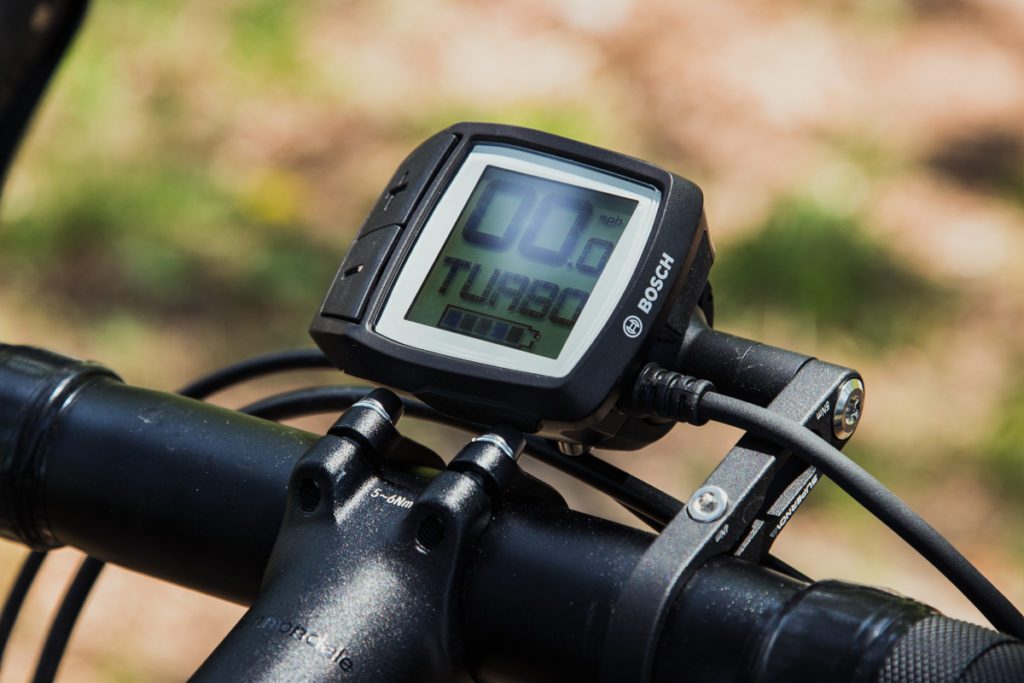 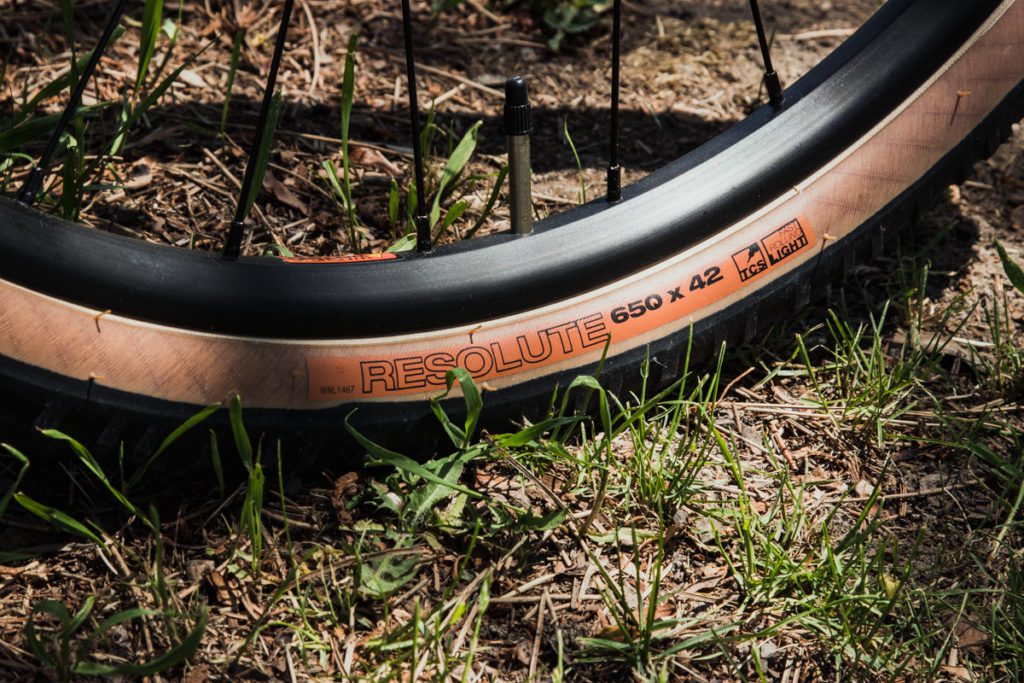 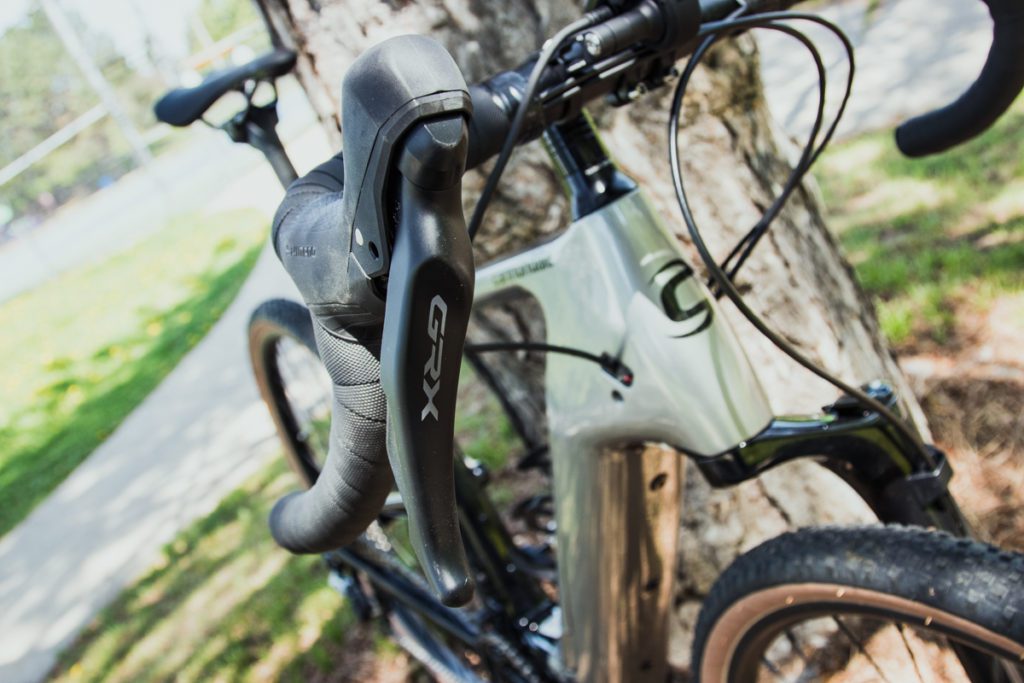 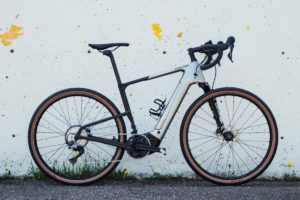 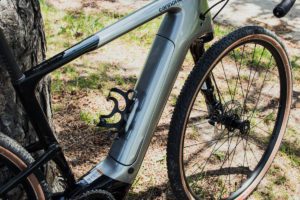 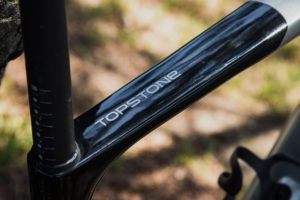 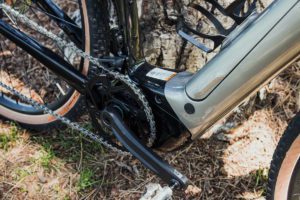 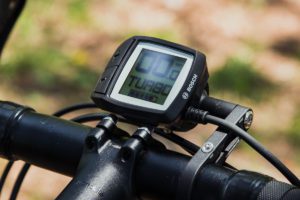 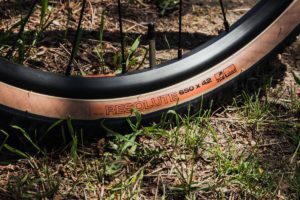 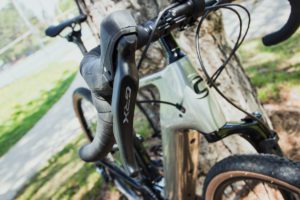 I can’t help but notice some similarities between the Topstone Carbon Lefty and an earlier version of the Cannondale Scalpel mountain bike. That design also used flexing chain stays and a lefty fork to smooth out your ride. The Topstone may share many design characteristics with a mountain bike, but this suspended machine is undoubtedly meant for gravel.

I tested the Topstone Carbon Lefty 3 equipped with Shimano GRX mechanical and the all new Oliver Lefty suspension fork. The bike’s 30 mm of travel sits on a set of WTB Venture 47 tires, which roll quite well on pavement given their size and tread. I was impressed with the bike’s performance on the road. I was expecting a very soft or bouncy ride, but the Topstone is surprisingly responsive on the road—with the Oliver Locked out it was easy to keep the bike hovering around 25 km/h mark on the flats. The 11-42T Cassette paired with the 40T front ring had me spinning out at around 44 km/h which was fine considering the 42T ring in the back was light enough for all the technical climbing I encountered. 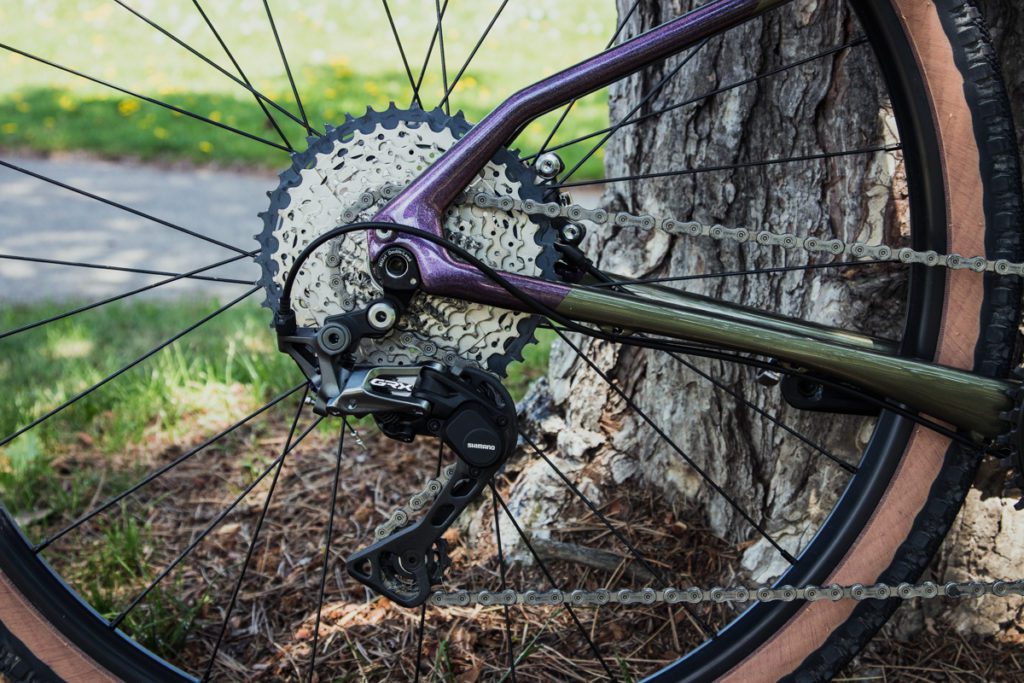 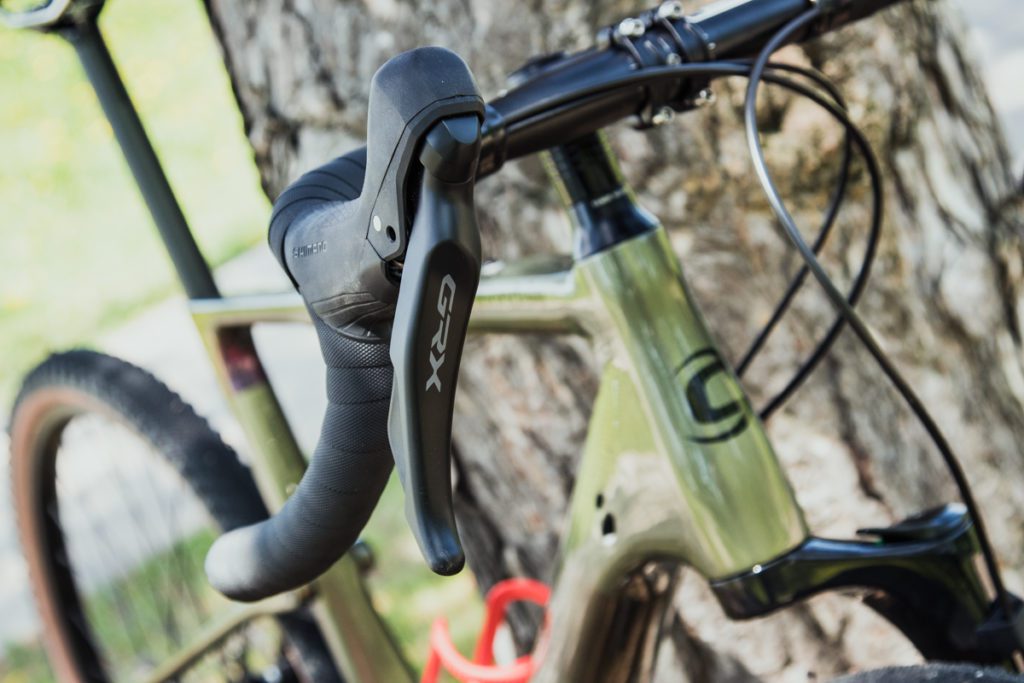 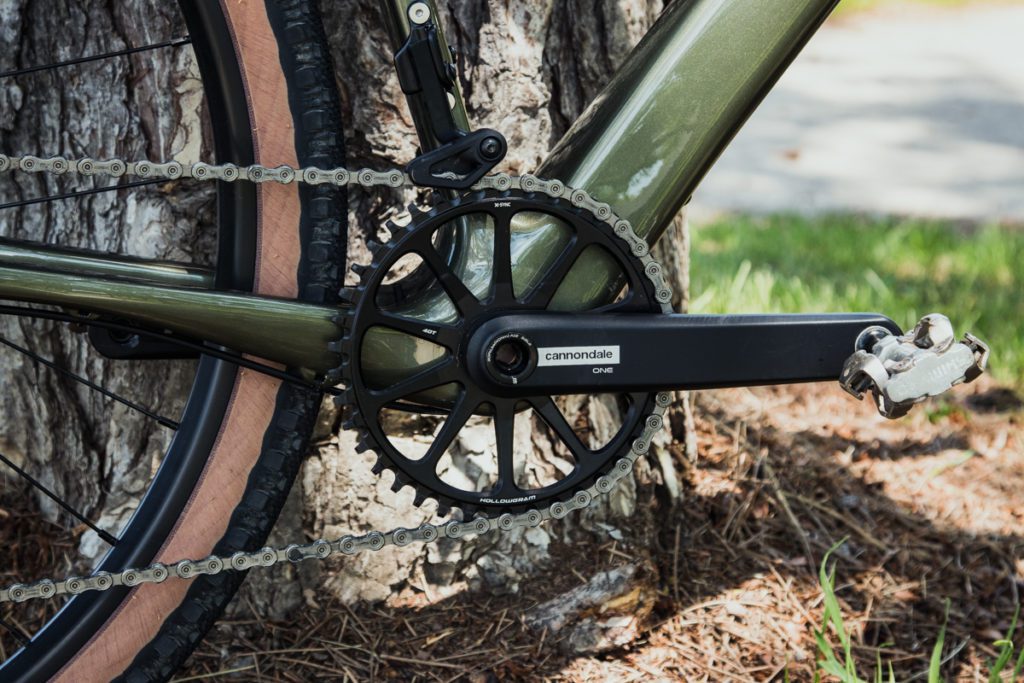 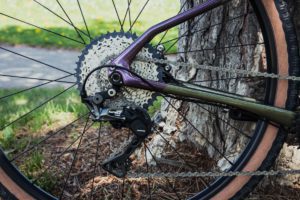 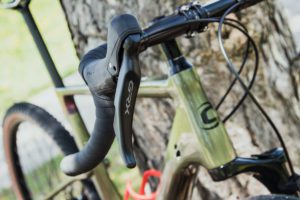 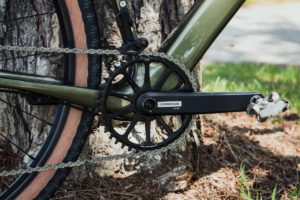 Given all the mid 90’s mountain bike comparisons floating around the 650B gravel category I had to take the Topstone Lefty to the trails to find out how close the Topstone was to it’s previously mentioned Scalpel predecessor. The Topstone fared quite well on single track and was easy to weave around tight trails. It can soak up some smaller rocks and roots, but is quickly thwarted by bigger off chamber roots and rock gardens. The Topstone may not be as off-road capable as a 90’s mountain bike, but it is certainly at home in the woods and gave me more confidence on technical trails when compared to most other drop bar bikes.

Where the Topstone Lefty really shines is the deep stuff. Deep chunky gravel. The stuff your road bike doesn’t like is what the Topstone Carbon Lefty eats for breakfast. The best way I can describe the sensation is like surfing a gravel wave. The 30 mm of suspension and 47c tires perch you comfortably atop the rough surface and allow you to keep the power down when a lesser bike would have you searching for traction or a smoother line. Having the Lefty up front also allows you to ride a bit faster knowing you have some travel to soak up any big potholes or obstacles that could reveal themselves. It’s worth noting that the Lefty Oliver does not feel like it’s mtb brethren. The Oliver uses similar needle bearings for smooth operation like the mtb version but a much different damping system designed to avoid bobbing while pedalling and diving under braking, which seemed to be doing the job during testing. 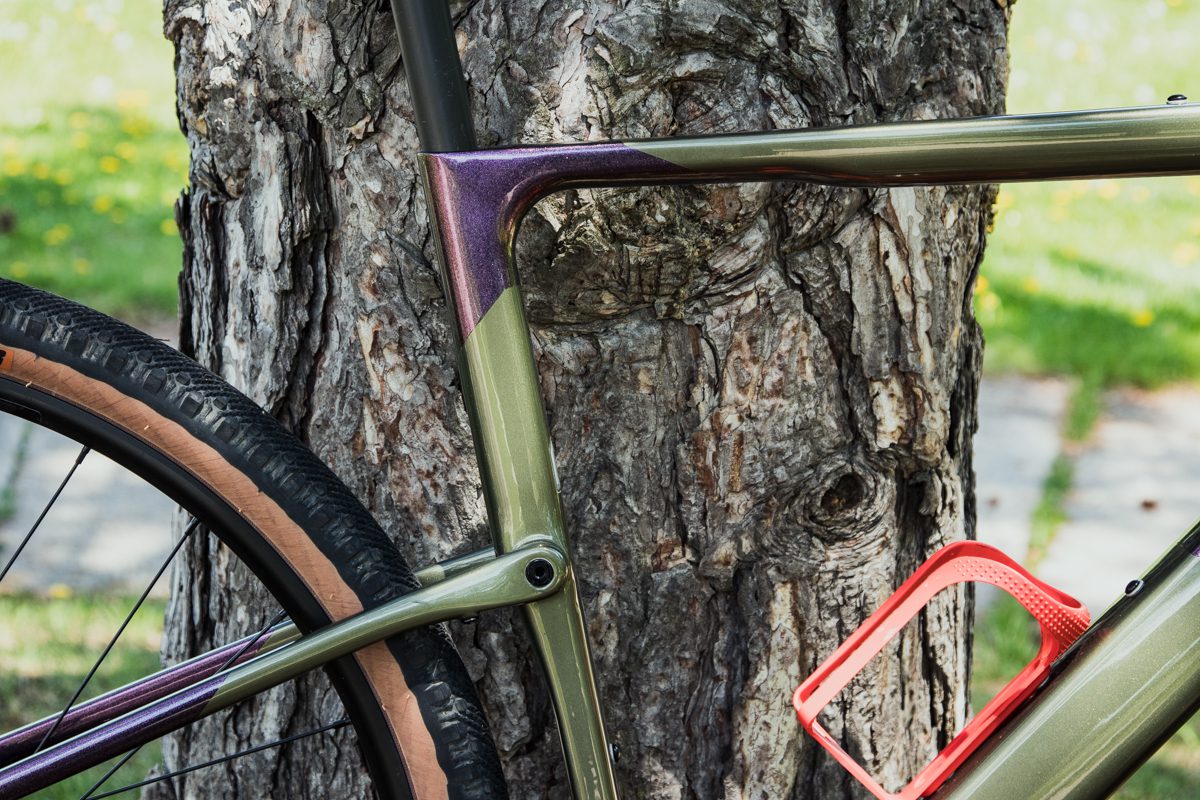 When Cannondale launched the Topstone’s predecessor the Slate it had a cult-like following, and helped pioneer the 650B road/gravel category. The Topstone Carbon Lefty is a refined version of that bike and offers an enormous amount of versatility. The bike really feels at home on the road and in the trails, but especially surfing that deep gravel wave at higher speeds. The Topstone Lefty really opens up possibilities when it comes to planning rides. The light, stiff yet compliant ride lets you pedal comfortably all day wherever you want to go. 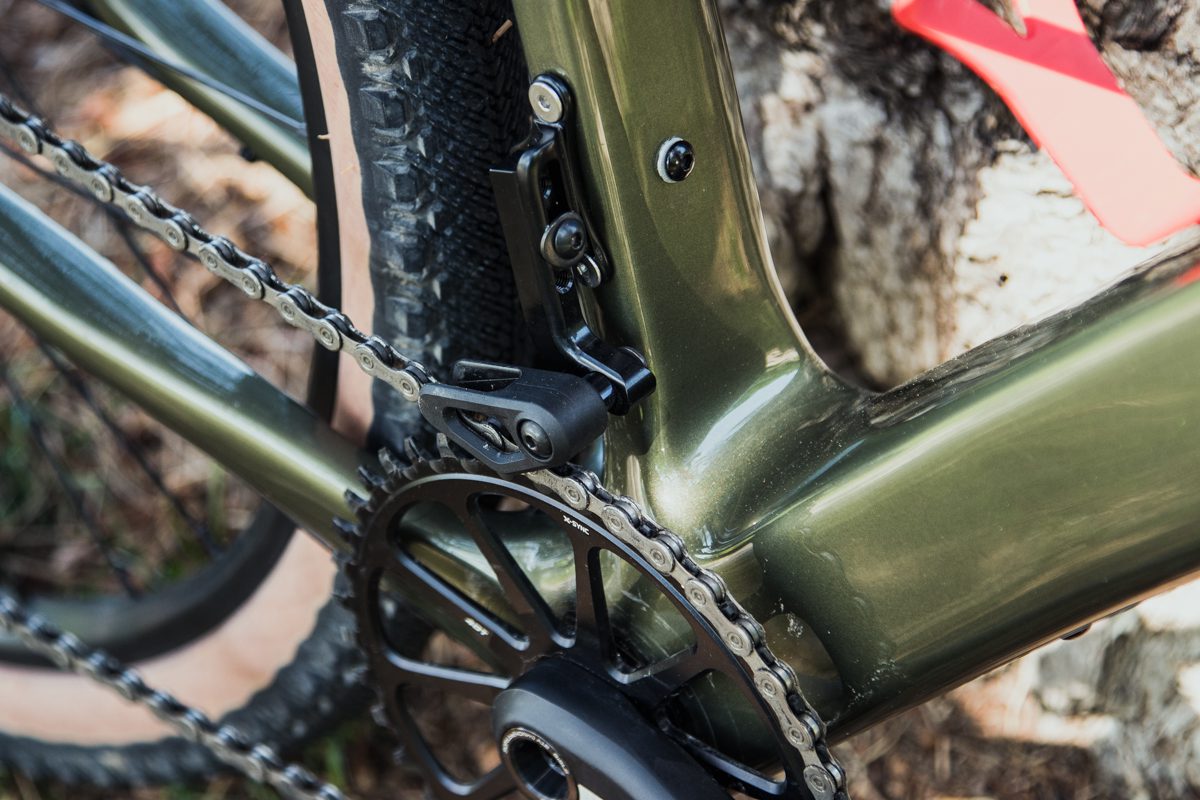