As kits designs go, Reggie is pretty out there—but that’s kind of the idea. There’s a bit more room for fun in gravel and cyclocross, and the brand, associated with races like the Reggie Ramble gravel grinder, takes liberties with what a typical kit “should” look like. It pokes fun at classic kits, and isn’t afraid to get loud, with colourful patterned designs. Siblings Jeff and Laura Wills collaborate on the kits; Laura designs the kits and Jeff takes care of everything else.

Reggie Jackson is an American former professional baseball right fielder who played 21 seasons in Major League Baseball. Jeff Wills says he’s the coolest name from his childhood so it made sense to use it for the brand. Interestingly, Jackson isn’t the only non-cycling sports star affiliated with the Reggie brand.

Reggie Miller, former pro basketball player with the Indiana Pacers, and current NBA commentator, has gotten pretty seriously into cycling in the past few years. The cyclist has been known to wear Reggie kit and showed his support for the cancelled Reggie Ramble race this year.

Today’s ride was in honor of the Reggie Ramble ride that was rescheduled for June of 2021. Want to applaud the @reggie_rider race promoter and all the promoters who have postponed, suspended, cancelled their races as we ALL come to grips with our new abnormal. Thanks for putting the riders, their families and your community ahead of a bottom dollar. I know I’m new to the race scene, so I’m probably talking out of turn but I can only speak for myself, the roads the trails the gravel are NOT going anywhere. And for riders like me, when I see promoters cancel races for the greater good, makes me wanna sign up and support you even more. I’ve NEVER done the Reggie Ramble race, but it’s been added to my bucket list of races to do if and when.. #BeSafeRideSafe #SmartRacePromotersUnite

The Early Break jersey is designed to symbolize the craziness of getting into the early break and then hanging on for dear life in the final drag for a desperate win. The colours are prominently pink and green, but there are hints of blue, orange, and a hidden rainbow under the right arm. This jersey is Reggie’s ‘faster’ fit, which is a bit tighter and more aero than the ‘fast’ fit. 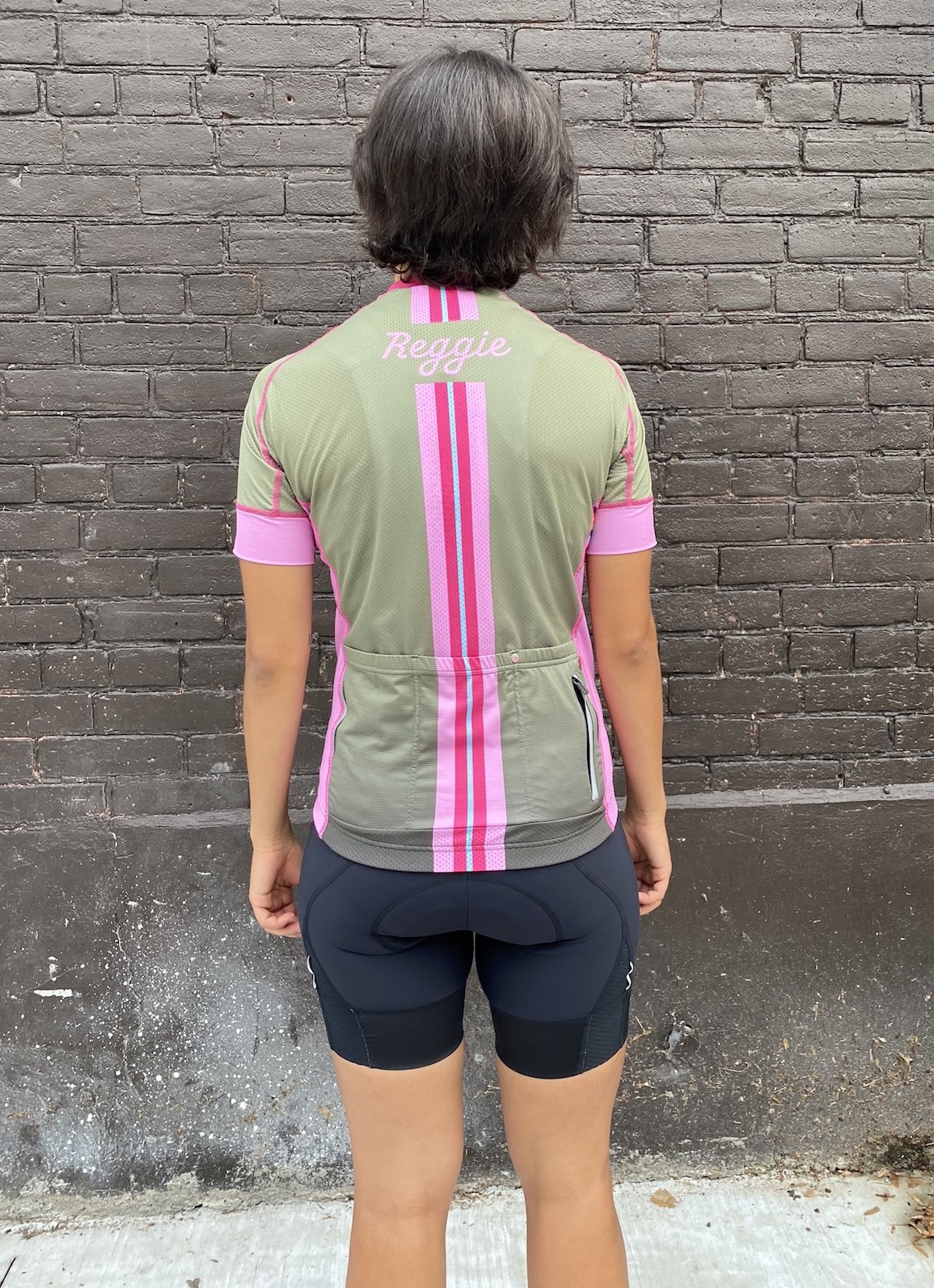 The jersey is light and breathable. A grip at the bottom keeps it tightly in place—it doesn’t ride up at all, even when the pockets aren’t weighed down. The pockets are thick and deep, and feature a zippered waterproof pocket on the right side to keep important items safe. This feature is great for muddy and bumpy gravel rides, when you might occasionally feel the need to check that your valuables are dry (or even if they’ve flown out of your pocket). 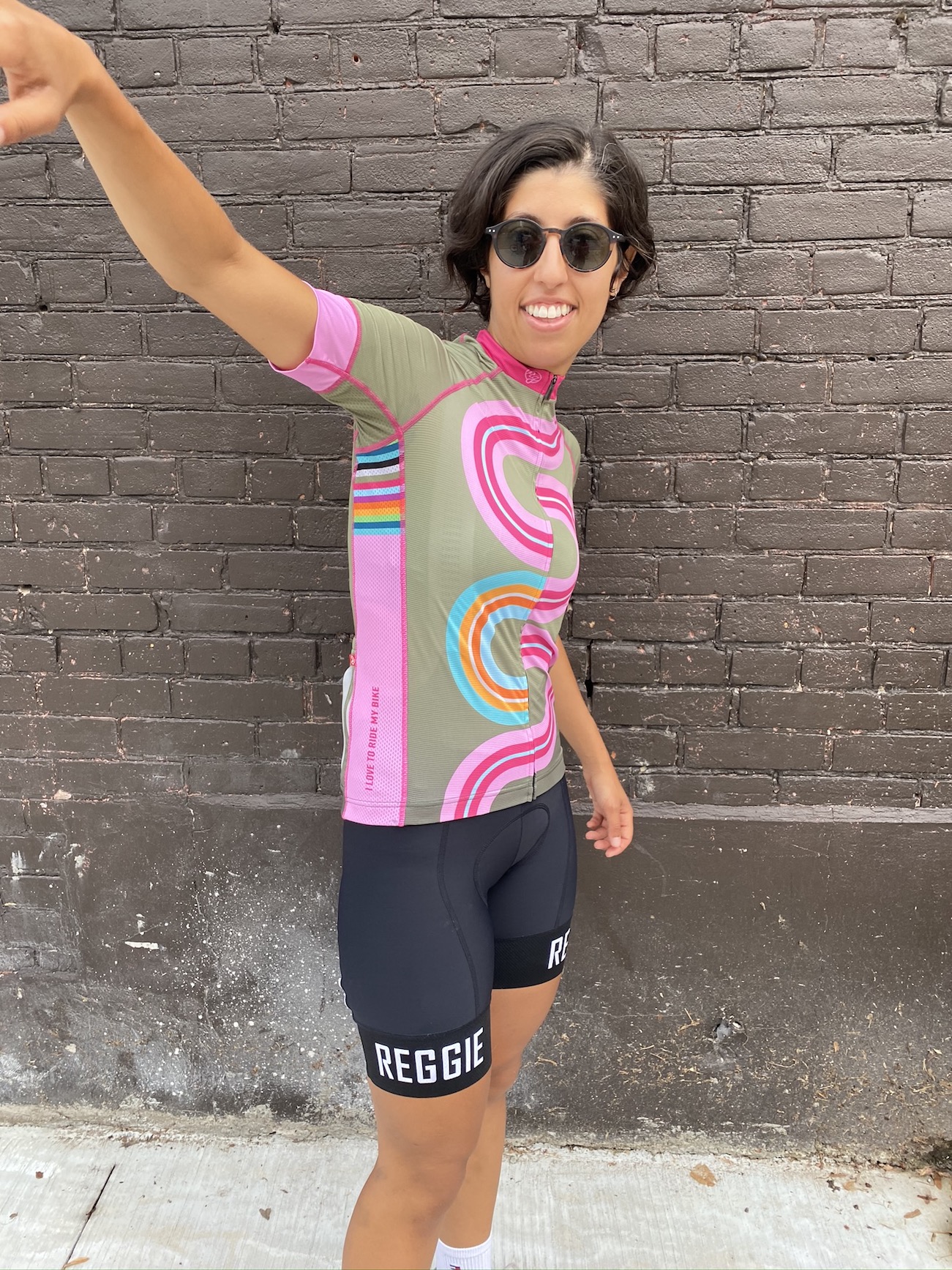 Visually, there’s a lot going on with the Early Break jersey. The straight road on the back turns into a winding switchback on the front. Little details are everywhere—the reggie logo is on the collar, the motto, ‘I Love to Ride my Bike’ runs up the right side of the jersey and right above the motto is a hidden rainbow.

One other little detail is the small rivet on the back of the jersey. It’s an homage to the days of leather saddles, which were held together with rivets. When cyclists were riding all out their position, they would move forward, putting them on top of those rivets. This became known as riding “on the rivet”.

Reggie kit includes rivets as an homage to the heritage of the sport and to riders pushing themselves to the limit.

The Classy White bib shorts also feature a Reggie rivet on the bib straps. They’re black with only the word REGGIE on the bottom. Compared to the Early Break jersey they’re super toned down stylistically, but that actually makes them quite versatile. They look good with pretty much any jersey and balance out the bold Reggie designs. 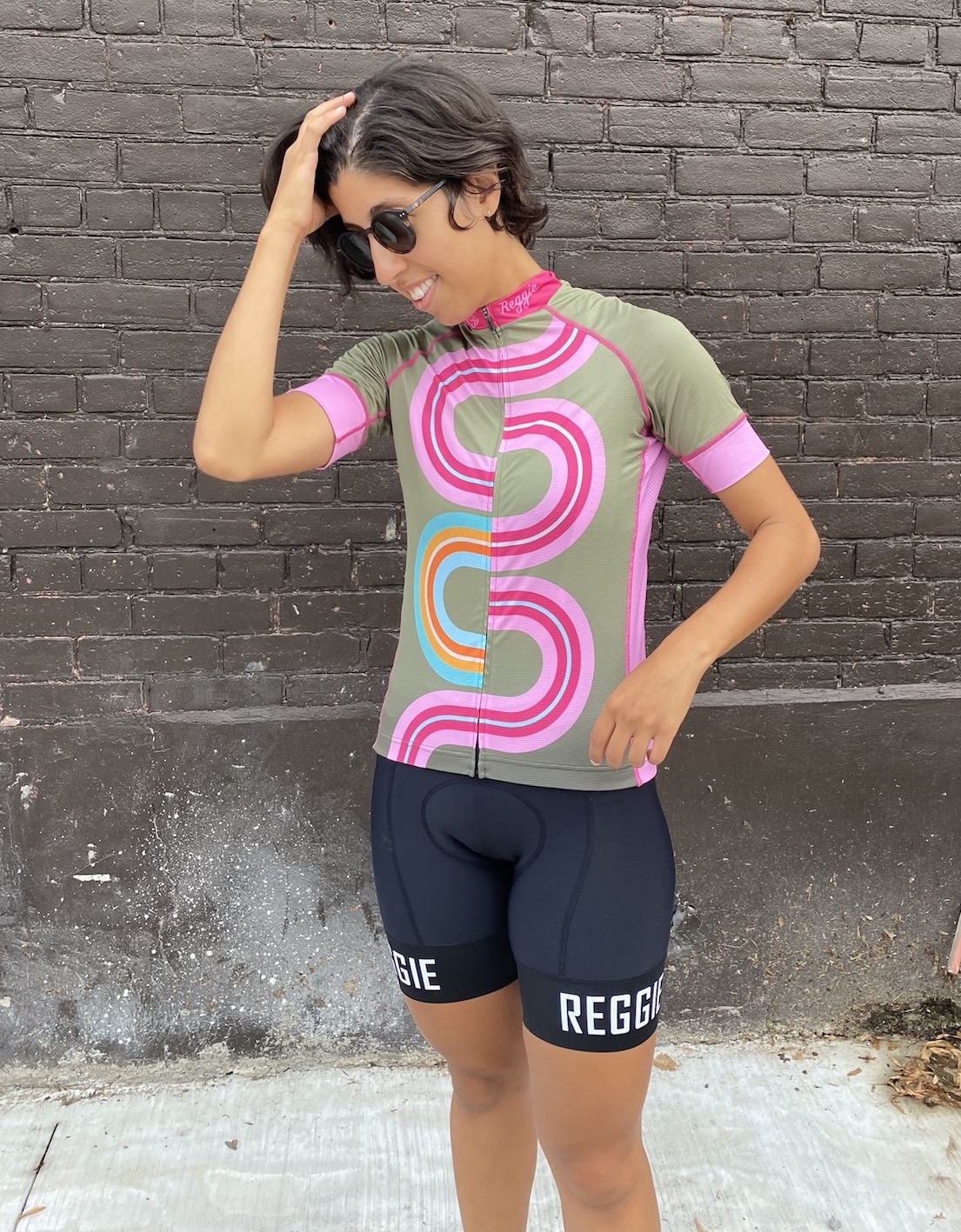 The chamois is comfortable—it’s not overly thick but it’s firm enough that it feels like it will last for a while. The bibs have a nice grippy bottom and the straps are wide and breathable. At $78 CAD, they’re affordably priced bibs, and the quality is surprisingly good.

The Early Break jersey is $165.00 CAD, and is available at Reggie.bike.

The Classy White bib shorts are $78.00 CAD, and are available at Reggie.bike.