In 2009, Loretta Henderson lay on her back on top of the first hill she had cycled, just outside of the small English town of Bridgwater in Somerset. 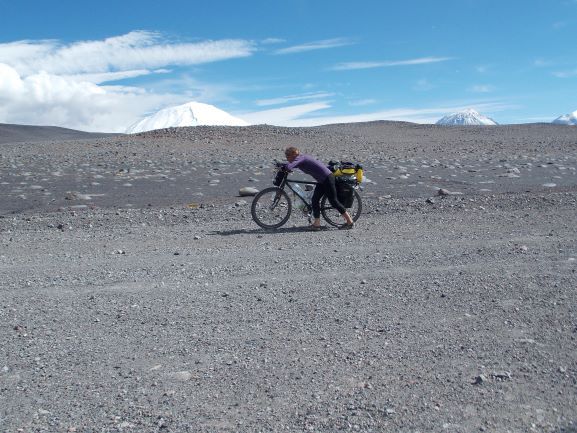 The brand new green Thorn Raven bike she had just purchased at St John Street Cycles, the shrine of the legendary bikepacking machines, lay dismounted on the ground beside her. Why, she wondered, had she thought it would be easy to bikepack?

When she had looked at Stephen Lord’s classic bikepacking book, The Adventure Cycle-Touring Handbook, she had been inspired, like so many others, to hit the road. “I remembered a picture of Lord on this bike with an empty milk jug tied to the back. I had thought, ‘I didn’t know anything about biking, I didn’t own a bike, I had never met a bikepacker, but I knew I could tie a milk jug to a bicycle.’” Now, however, she had second thoughts. Everything in her body hurt, she was out of breath and she realized that Lord had left out an important point: bikepackers, in Henderson’s words, “were a bunch of lunatics.”

She kept going, however, and the round-the-world adventure by bike and sailboat that unfolded over the coming year transformed her doubts into a lifelong passion for bikepacking, and especially women’s solo backpacking, a journey that has inspired women bikepackers around the world.

Henderson was born in Cobourg, Ontario, a small town on Lake Ontario, and went to Western University in 1995. She had always been active as a youth, swimming and cross-country running, but her interest shifted to outdoor adventure sports and after university, she taught outdoor education in New York and Wisconsin before she moved to Alaska where she worked for school districts as an education program development coordinator. The work was rewarding and allowed her to use her creative side to develop programs like the course that paired yurt building with Grade Nine geometry and Algebra. “I had everything you might want, a career, a boyfriend, I was building a house,” she says. “I had all of it, but I wasn’t too interested in any of it. That’s when I found The Adventure Cycle-Touring Handbook. The combination of travel, adventure and the physical challenge was irresistible.”

Thus she found herself on a new path in life on top of that hill in England In 2009. After a little rest, she got back on her bike, which she soon nicknamed, presciently as far as recent history is concerned, Pandemic, the Magic Bicycle, and made it to the coast, and thence to Ireland. She cycled across the island, then flew to Bangkok. She cycled to Mongolia “one of the better countries for bikepacking,’ as far as Henderson is concerned, although she was there before many of the newer roads were built. Riding there, she said, was “like navigating through a bowl of spaghetti. I was mostly just navigating off of the arc of the sun.” Then she cycled Cambodia, Laos, Thailand, China, Pakistan and the Karakoram Highway. “I can definitely recommend the Karakoram Highway,” she says, “although the roads were washed out and for part of it, I was transported around wiped out sections of road in a river in a rickety boat. I spent many days up there, alone in the backcountry. Glaciers and mountains are so close, it’s all at such high altitude.” 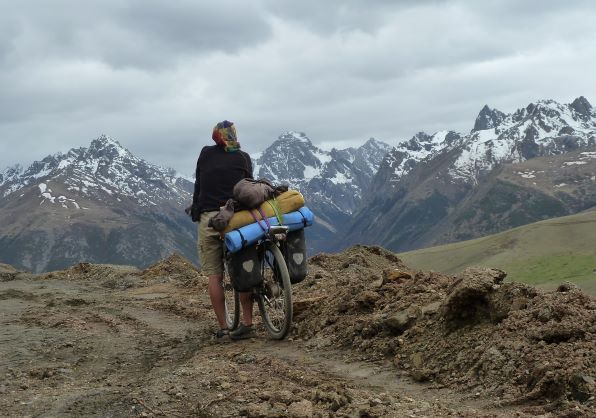 She crossed into India and flew to Africa, where she rode from Cairo to Capetown “on as much dirt as I could find, and avoided main roads.” She sailed from Walvis Bay, Namibia to Brazil and headed for Patagonia, which she toured in winter, then rode up to visit her family, headed for New Zealand. After touring the island she convinced the crew of a sailboat about to enter a regatta that finished in Indonesia to take her with them. “Sailors really like cyclists,” says Henderson. “They said because I was fit, motivated and looked like I wouldn’t hurt myself on the boat, I could come.”

Eventually Henderson had circled the world and cycled in 41 countries on the way, over a five-year period.  “I cycled or sailed the entire route,” says Henderson, “and never flew except when there wasn’t an alternative. I hardly ever took planes on my world tour. I never ever took the bus or rides, I cycled it.  If you picture the world map, my world route was a continuous route west across the world from New Zealand to the Pacific Ocean.

Asked to reflect on the dangers of female solo bikepacking, she says, “Dangerous situations? Sure, after all, it is supposed to be an adventure! On a route known previously by only male cyclists, my effort took me from the sound of a shaman’s bells in Mongolia to the smell of fresh elephant dung on a bicycle wheel in Botswana. When I began bikepacking, I didn’t even know how to change a flat tire. [If I had a flat,] I pushed my bike down the road looking for help. It’s funny looking back at the beginning of bikepacking around the world. Some people say I am fearless, but as the legendary author Dervla Murphy [who is mentioned in Henderson’s The Big WOW Book: 100 Women From Around The Travel Solo By Bicycle] said, ‘I am fearful when there is something to be fearful about.’ 99.9 per cent of the world’s people are only there to help. As a solo female adventurer who has crossed the world’s mountains, deserts and oceans on foot, bike and boat, I always seem to be getting adopted. I often camp with families and love learning about local cultures, as is reflected in my photography at Solo Female Cyclist on Instagram and in my motivational live and zoom speaking events.”

She did notice, however, a lack of community-building tools for female bikepackers. “When I first started on my bike, I had never met another woman cyclist, there just really wasn’t a community. I posted Jill’s [the first female bikepacker she met], photo and put a shout out through facebook to build a community.” She started the  Women on Wheels  wall, on her website http://solofemalecyclist.com/p/wow-women-on-wheels.html and soon more than 245 female cyclists posted their photos and stories on the page. “It’s truly taken on legs of its own,” says Henderson, “that’s exactly the point, to save people a lot of time.”  Henderson has published a hundred of these stories in her e-book, The Big Women on Wheels Book. 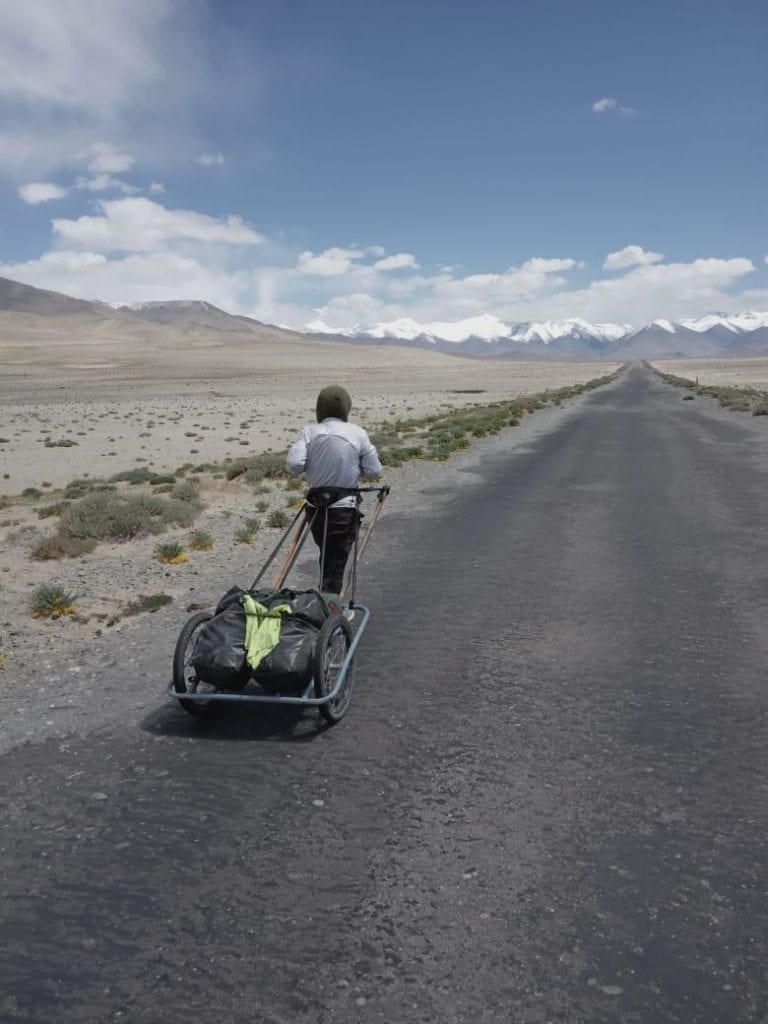 Nowadays, Henderson has extended her activities into multi-day backcountry running adventures, but she hasn’t given up touring with wheels altogether. “I built myself a cart and ran the ‘stan countries. I still prefer sleeping under the stars, multi day trips, and not running on the clock. The whole point is to share and motivate.”