There is a wild and wonderful world of gravel wheels right now. From wide 650b rims using what are clearly mountain bike tires to 700c slightly-tougher road rims, you can get basically anything you can dream of for your next mixed-surface adventure. In that spectrum, NOBL’s HR35 occupies a much-needed middle ground.

NOBL pushes the rim design enough that the HR35 wheels live up to the “gravel” designation without doing anything unnecessary or extreme. Add in some classic good looks, and the B.C. company delivers a carbon fibre wheelset that will outlast the more fleeting all-road fashions. 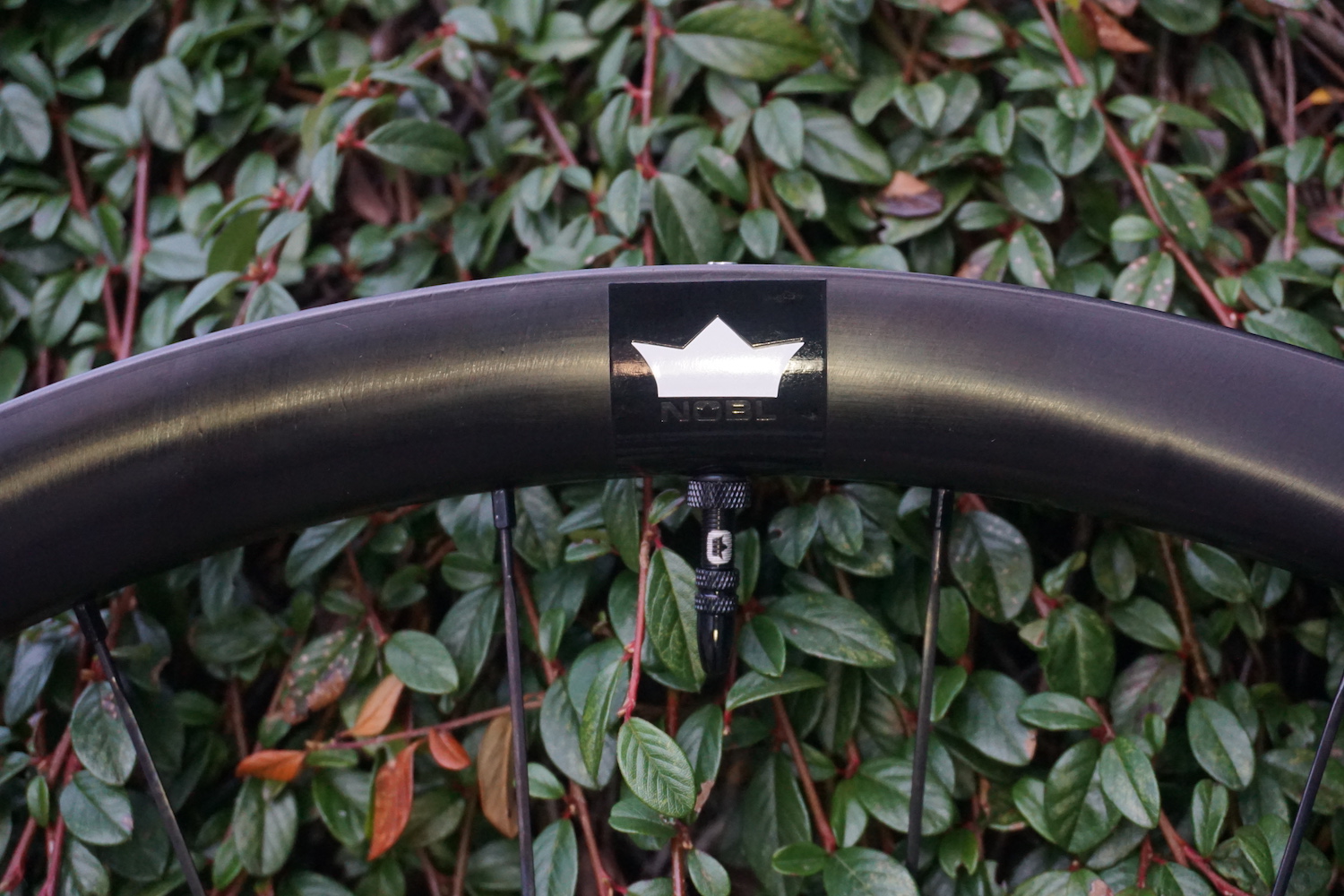 NOBL actually makes two, very similar rims, the HR35 and CR35. What is the difference? Both design and function differ slightly. The HR35 uses a “hookless” rim design, while the CR35’s use a traditional hooked rim bead designed for use with clincher tires. Both share a 35-mm deep, mid-depth rim profile and 29-mm externally width. The HR35s have a 24-mm internal width while the CR35’s are slightly narrower at 22 mm. The CR35 hooked bead adds 10 grams per rim. Both designs use a front and rear-specific carbon layup, with a 40-gram difference between the front and rear rim.

Both rims are designed for a range of use from road riding and racing to gravel riding and light bikepacking. The CR35s lean more toward the paved side of that spectrum. They’re designed to run higher pressures and slightly narrower tires (28c-45c). The hookless HR35 rims push more towards rougher surfaces and higher-volume tires (30c-47c) that will be run at lower pressures and probably tubeless. NOBL breaks this down in detail but, as a reference point, the HR35’s are designed to be run below 60 psi.

There is significant overlap between the two rims, for sure. But they both let riders cover a good chunk of very varied ground. And, if you’re investing in a set of carbon fibre wheels, that is a good thing. With the CR35 you can cover anything from road to cyclocross and light bikepacking with one wheelset. The HR35 push that range a bit more towards rougher roads and heavier bikepacking, but will still cover you for cross and could be used for road riding.

With my riding tending toward the more off-road end of that range, including occasional trails, than the paved side, I opted to test NOBL’s hookless HR35. I set them up tubeless with 40c Kenda Alluvium tires. Getting the tires to seat tubeless was easy, with both tires snapping securely in place with a floor pump first go. Wipe away any leaking sealant, and you’re good to ride.

You definitely want to wipe away any sealant, though, because the HR35s look sharp. The raw carbon finish, which is only interrupted by NOBL’s crown decal (which you can order in any colour you like), gives the rims a distinctive appearance. The glossy carbon finish is also impressively durable. After months of bashing NOBL’s wheelset around on rough, loose gravel roads, the surface remains pristine. This could be because of rim’s construction process. S136 and P20 steel molds apparently allow for tighter tolerances and a cleaner surface straight out of the mold. With a single decal interrupting the carbon surface, it’s clear to see that what NOBL’s doing is working. 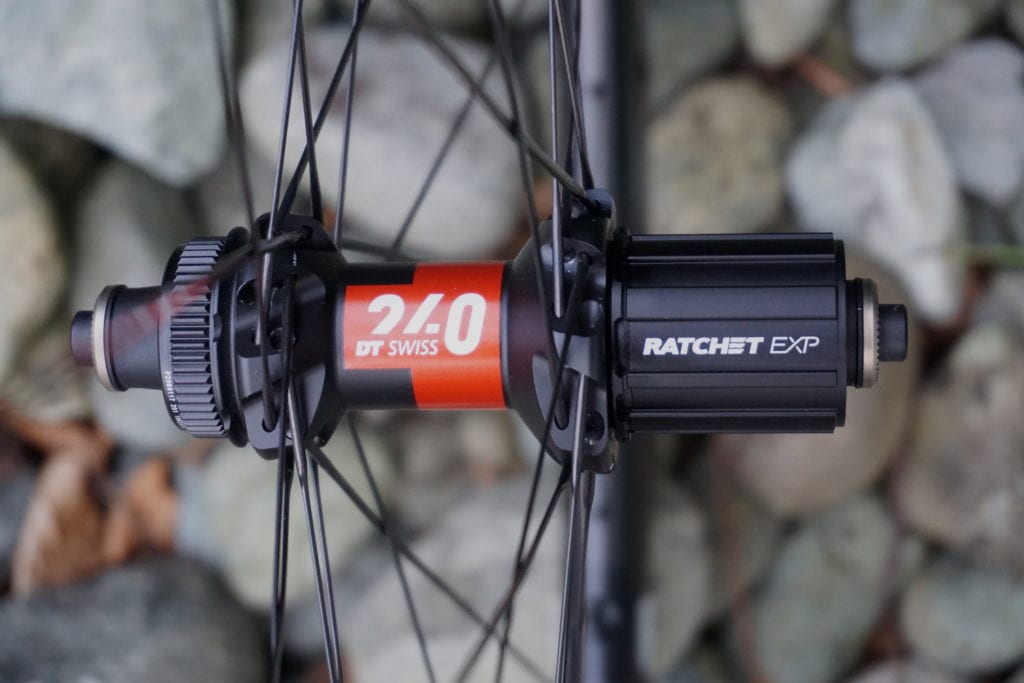 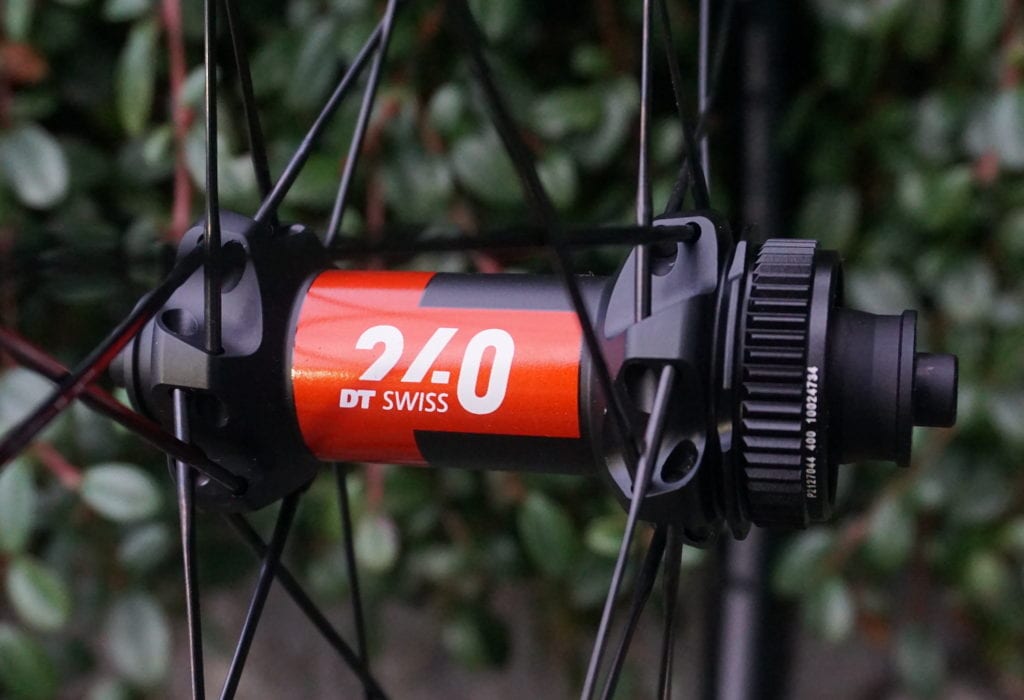 Straight pull spokes and centerlock brake mounts, though 6-bolt is an option too 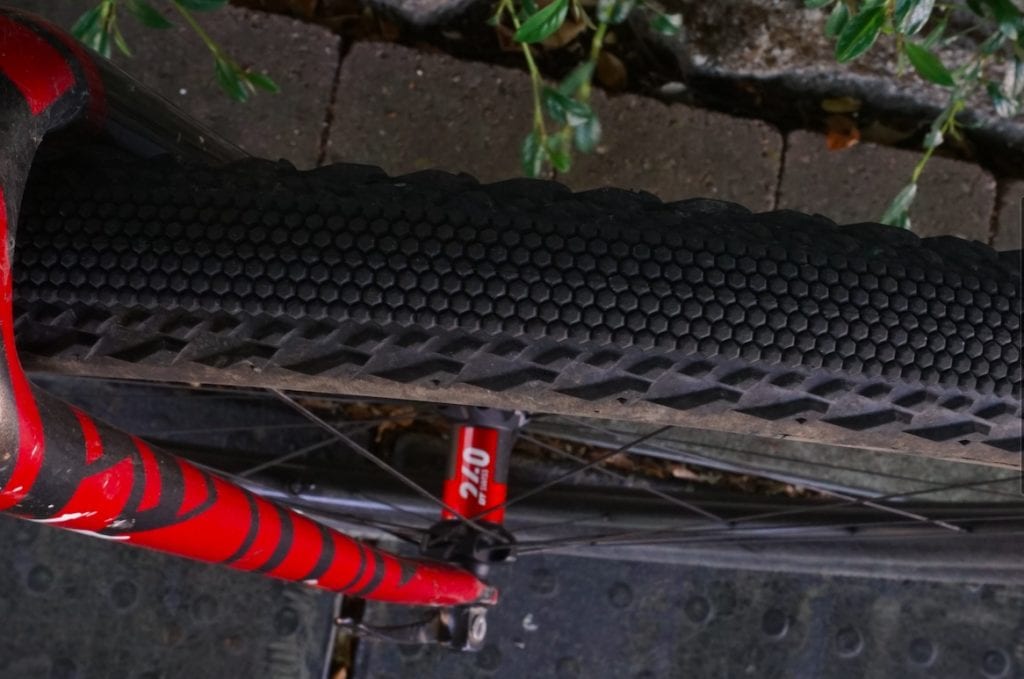 A 40c tire shapes nicely on the HR35 rims 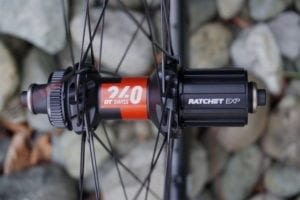 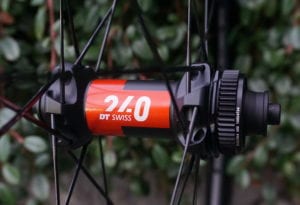 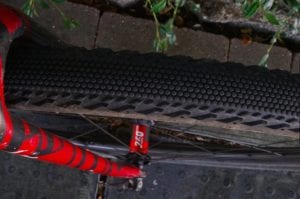 The HR35 is a mid-depth wheel. This is supposed to give some aerodynamic advantage without adding unnecessary harshness. The front- and rear-specific rim construction do help with the latter. While solid, the front wheel does feel like it takes a bit of the road noise out before it hits the handlebars. There’s still enough stiffness that the HR35s accelerate up to speed quickly and stay there comfortably, but without being teeth-rattling levels of stiff.

NOBL builds its wheels in house, in B.C., by hand using a wide range of hubs. My set had a pair of DT Swiss’ updated 240 EXP Ratchet hubs. These have a few advantages for gravel riders beyond just being light and reliable. The easily removable freehub body makes for easy servicing, so you keep your hubs clean after especially dusty or muddy rides, when grit works its way into every part of the bike. For a while that could see use on several bikes, from road to groad, it also makes it easy to switch between cassettes and freehub standards for different drivetrains. If you’re investing in carbon fibre hoops and want them to work on several bikes, or for different purposes, being able to change that on your own, quickly, is an advantage. 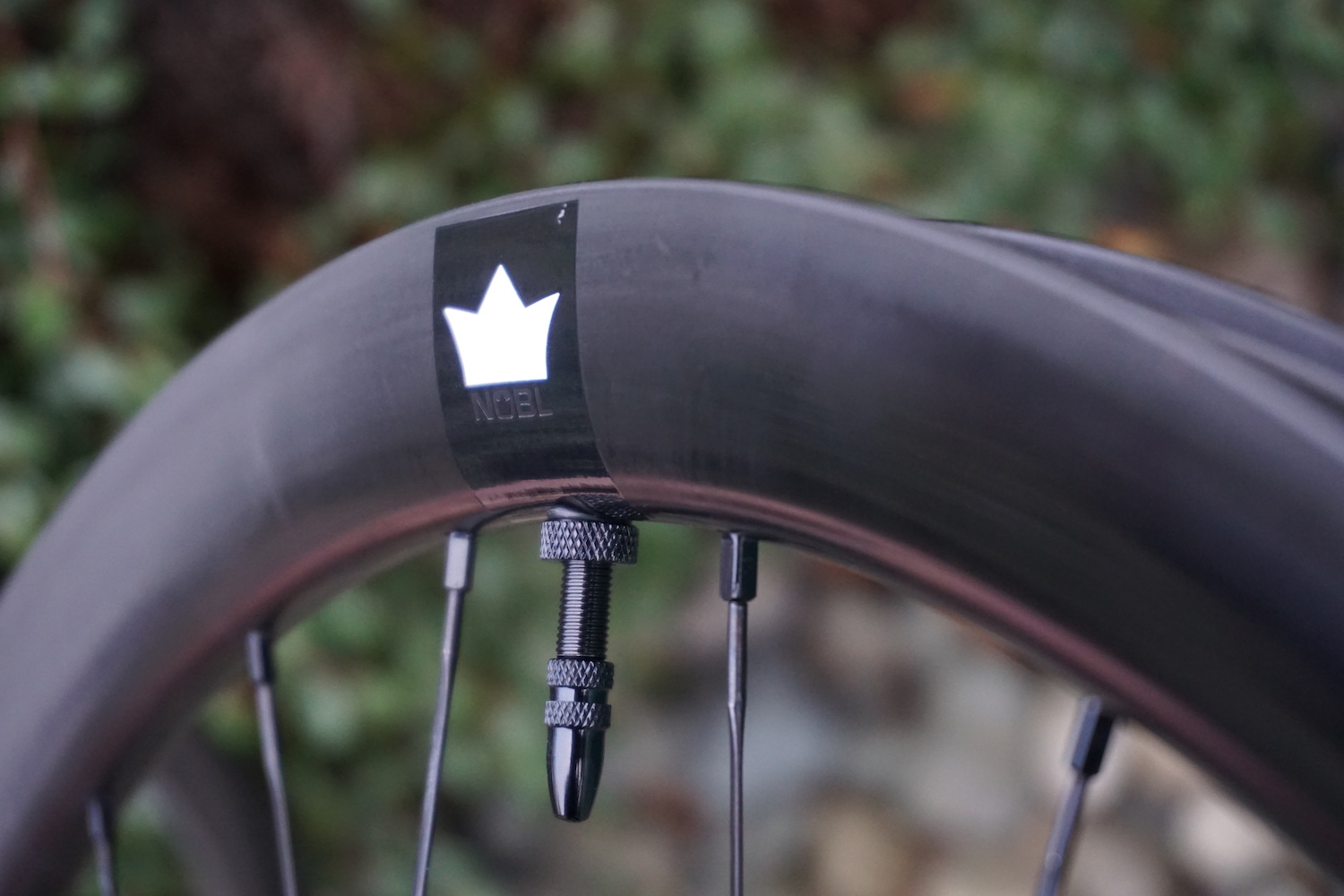 Having one set of wheels are versatile enough, realistically, to work well for a wider range of riding is also appealing. Carbon fibre hoops still aren’t cheap. But, relative to other options, NOBL does bring the HR35’s in at a reasonable price. As tested, with the DT Swiss 240 EXP, these rims cost $2,000. But, by switching to a DT 350 hub, you can bring that price to as low as $1,425. NOBL will build the hubs around a range of Industry Nine, Chris King and Onyx hubs, too, with prices varying up to $2,375 for the most expensive option.

That price also includes NOBL’s Warranty, which got a big boost in 2020 with the introduction of the brands Premium Series wheels (like the HR35). NOBL will replace rims damaged during riding, you just have to pay shipping. There’s also a 50% discount on wheels you break in “non-riding circumstances,” or through your own error.

The glossy, mid-depth carbon fibre rims also look really good. They match modern carbon fibre frames, but also looked surprisingly sharp against the narrow tubes of a steel steed. Looks aren’t functional, but they help. Especially when the HR35 also nail the function part. They’re a good width to work with a range of tire volumes, they feel good under acceleration without being harsh, and they’ve stood up to months of abuse. Add in the details of front and rear-specific design, and it’s clear NOBL has put some thought into these rims. Add that’s it’s a Canadian company, now based out of Courtenay, B.C., building wheels by hand, in house, and the HR35 are a solid option for committed gravel enthusiasts or for anyone looking for a high end wheel that will cover a wide range of riding styles.