“What are you up to this weekend,” the bike shop clerk asked. “Long gravel ride,” I replied.

“ALL of the gravel,” I said. And that’s pretty much what we did.

Covid -19 had affected all of us in different ways. Some cyclists are somewhere that encouraged exercising outdoors, alone, at a safe distance while others were on full 24hr/ day lock down.

I was fortunate to be situated in Victoria BC for the majority of the “lock down”. I love where I live. The west coast offers more adventure opportunities than I will be able to fulfil in a lifetime.

This break from racing has given me a foothold to begin searching out those new adventures and stepping further and further out of my own comfort zone, while also playing within the rules set out by our PHO (public health officer).

I’ve always sought out a different path than most. This has only become a more firmly defined character trait over the last few years as my experiences continue to teach me new things and my fitness grows little by little, allowing me to do things I never really considered possible or normal before now.

This particular day was something I had been thinking about for a while. We have a ride out here called “the BIG loop” or “golden triangle”. It’s a roughly 270km road ride starting and finishing in Victoria that passes through two towns (Port Renfrew & Lake Cowichan) both roughly 100 km away. Either of those is a tough out and back but only a few do the full loop. I did it for the first time last July. It was beautiful and one of the longest rides I’d ever done (Worlds in Austria held the top spot by .2 km until last week). This year I wanted to do “the dirty triangle”.

Over the past few years I’ve become comfortable and confident in the realm of route planning and navigating a map through various terrain. If I was going to make this happen I needed to be certain of every step along the way. There’s no cell service and no cars (save for the occasional 4×4, and no easy bailout.) Simply put if I F*ed up, it was on me to sort it out.

Thankfully I was not in this alone. My teammate and growing adventurist in his own right, Nigel Ellsay was up for the challenge. This was very handy as I’m quite sure Ricki (my fiancé) would not have been keen to see me wander off alone without an accounta- bila -buddy.

I thought I had already done all I could from my doorstep. Turns out, I was not even close—this was hands down the most badass ride I’ve done.

I hate early mornings, but for this, I would make an exception. We had a good chunk of daylight at our disposal and I planned to use all of it. At the crack of 6am I was rolling out the door to meet up with Nigel and we’d depart from the center of town. The weather for the day was a bit of a dice roll. We had seen anywhere from 12-18 degrees as a high but what concerned us most was the 80-90 per cent chance of rain from about 11 onwards. No risk, no reward? Though I’m not sure the risk of hypothermia was justified when the reward was some oven warmed dominos pizza (though it was delicious).

Luckily for us the weather changes more often here than just about anywhere else I’ve ever lived. The rain never hit. As we rolled along through the day we had the usual challenges that come along with the sort of bad ideas, a flat tire, then another, and another, then two more. Don’t forget the “nature” breaks (but boy howdy, the nature was exceptional for said breaks).

What makes this little pedal any different than what everyone else was up to during Kanza week? Honestly not a hell of a lot, though I will say it’s Canada, so like most things it’s just a bit harder. We have bears, cougars (mountain lions), bald eagles, and an absolutely insane amount of deer (honestly, are these cougars vegetarians?) To this day I have yet to actually see a cougar eye to eye, though we did see two black bears both on crux points of the ride and both between 10-15m away from us on the trail. I don’t think either of them thought we’d be worth the effort of the hunt. Win-win I suppose. 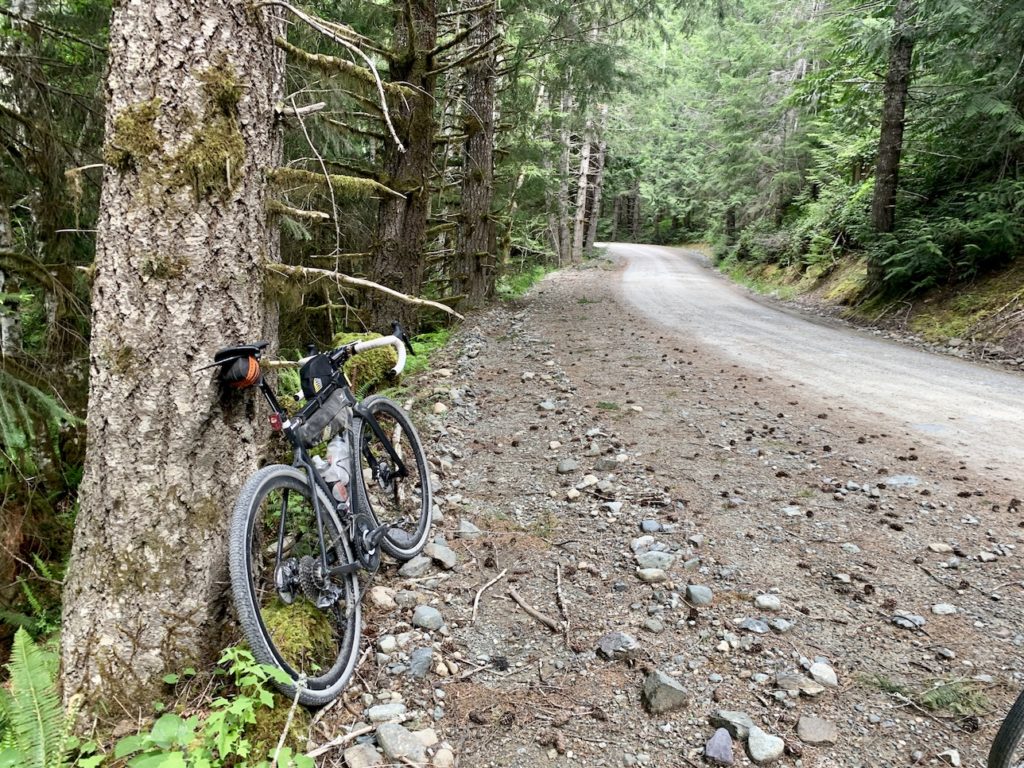 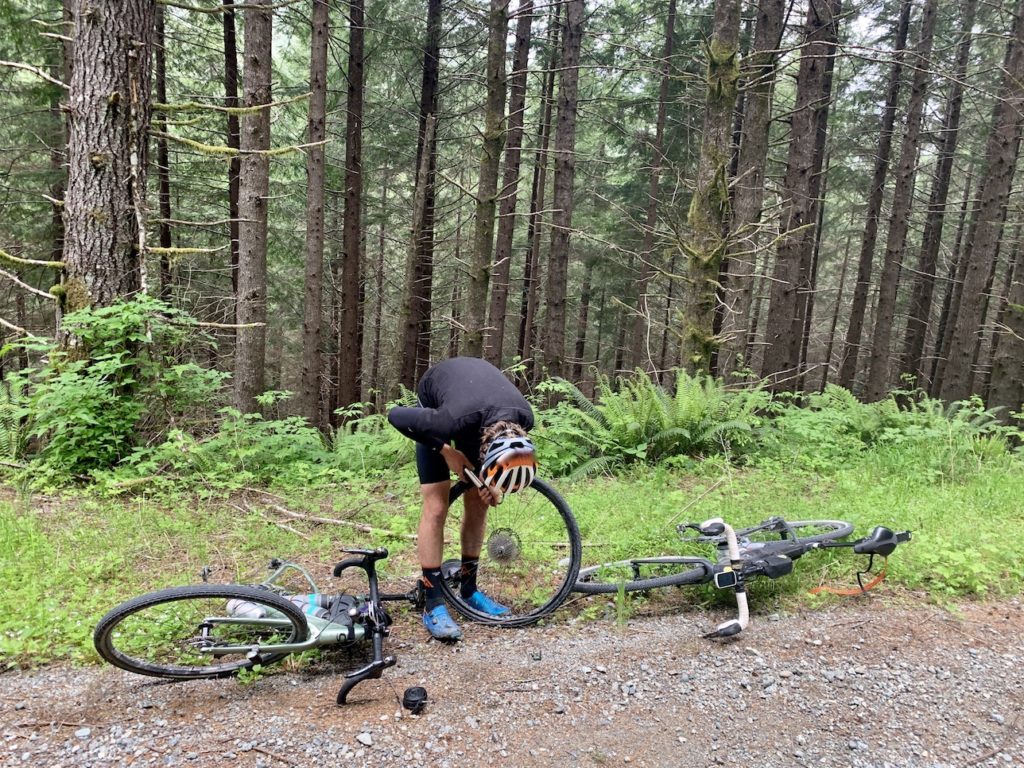 "A flat tire, then another, and another, then two more." photo: Rob Britton 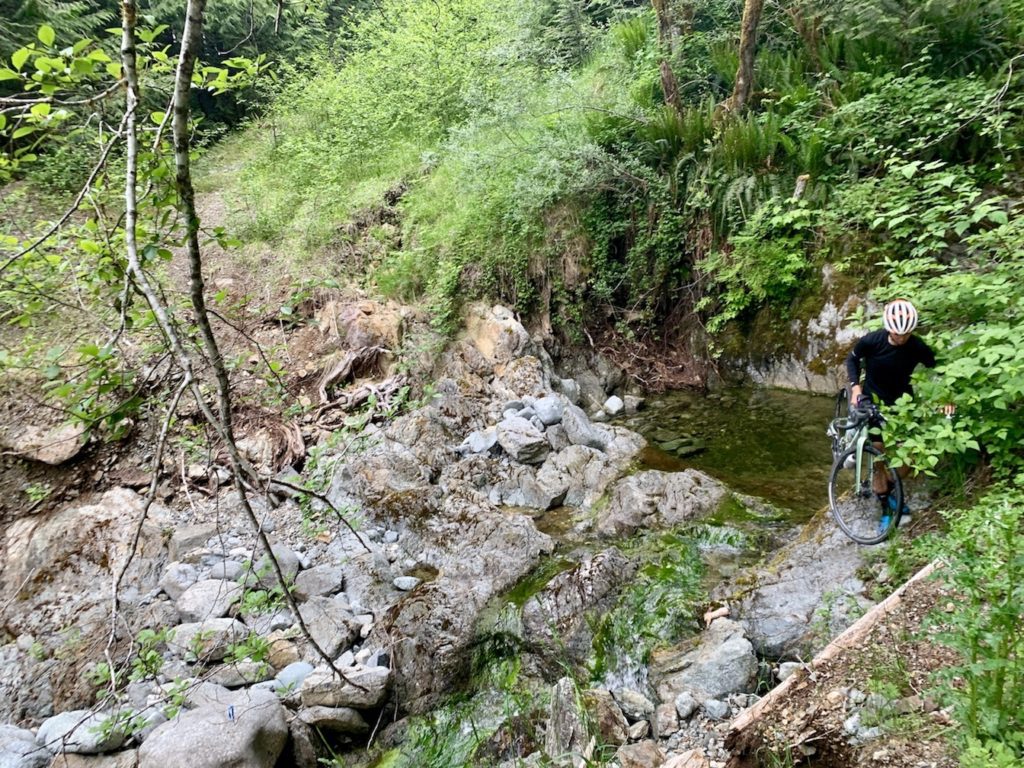 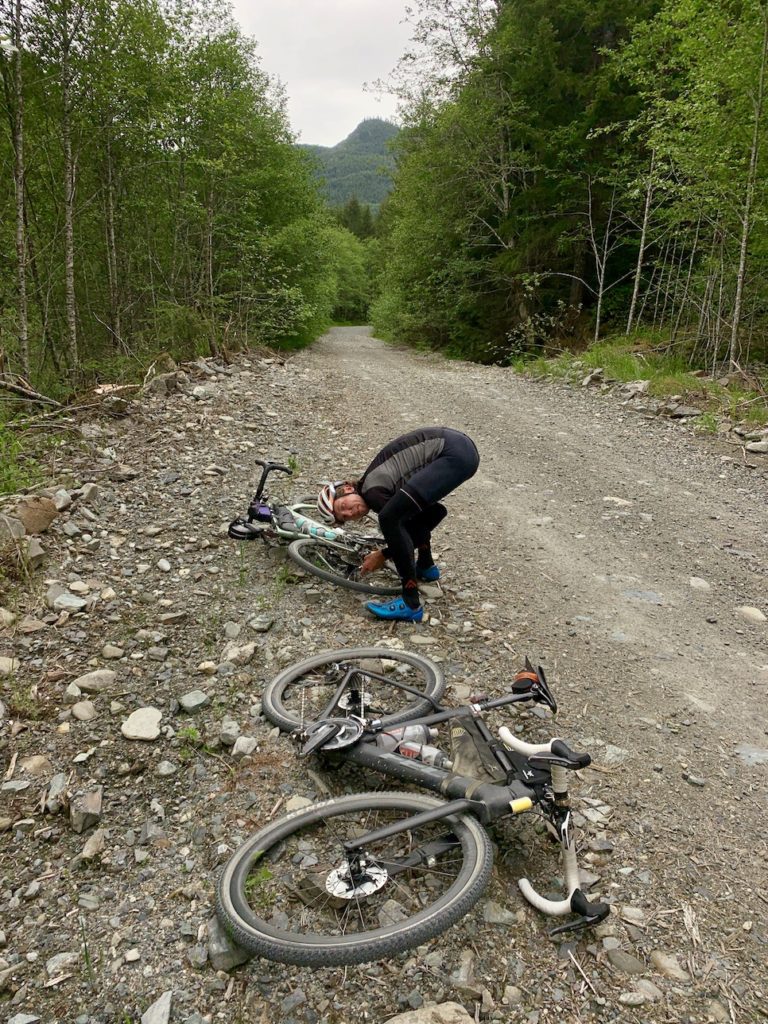 "a flat tire, then another, and another, then two more."photo: Rob Britton 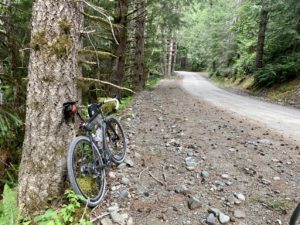 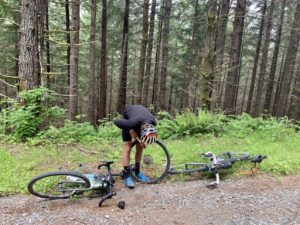 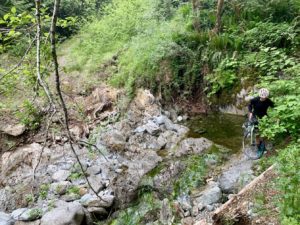 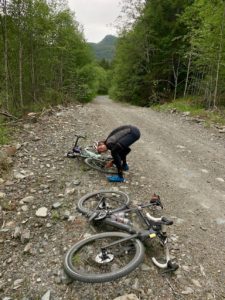 Through creek crossings, roads that had literally fallen off the edge of a cliff, downed power lines and the occasional, “ yo, just one sec, I’ll double check this is the right way”, the day also included its share of mental and physical trials and tribulations. We both experience our own high and low points but thankfully the other guy would take up the slack and keep the jokes rolling monologue-style (I’ve become an expert at talking at people, it’s a skill I learned over the years from my mother). If the jokes slowed down, shit talking is always a pretty good motivator with two ultra competitive friends.

At a certain point we were cruising along a fairly anonymous part of the route and I looked down at my garmin and realized that I had now ventured into new territory. It was the farthest ride I’d done. Soon it was also the longest ride I’d done again when I ticked over 13 hr, and then the biggest ride once more – 11,000kjs (so many pizzas). 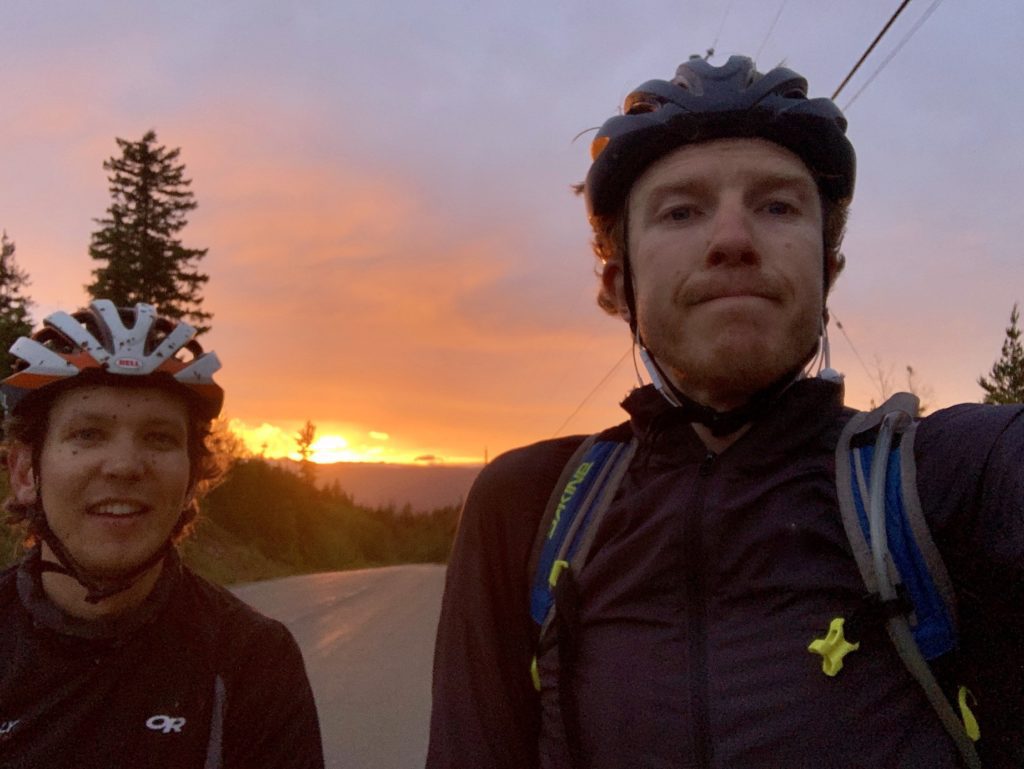 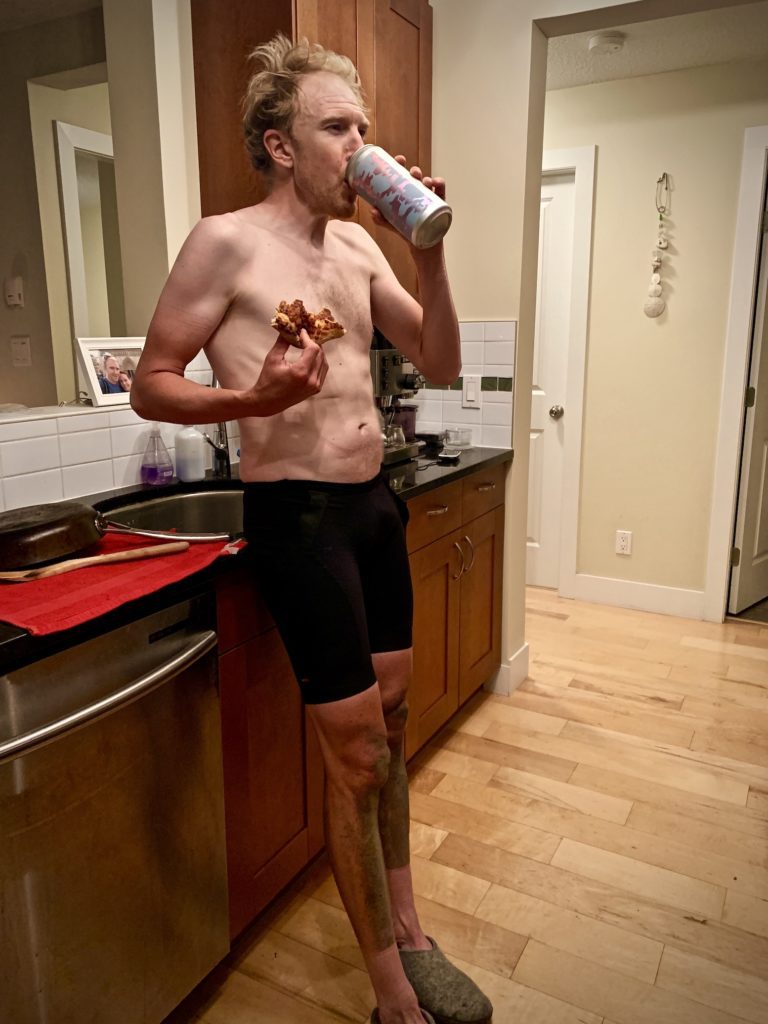 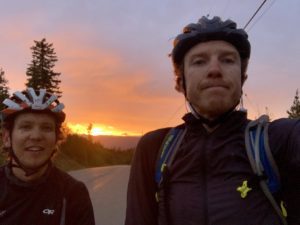 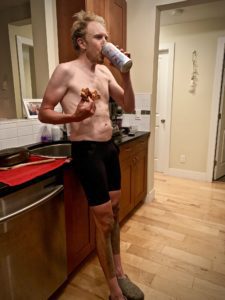 More firsts to be found

At the end of the day there was nothing out of the ordinary about any of this because for most it doesn’t fall within ordinary at any point. I’m coming to realize that what my ordinary used to be was in serious need of a shake up and I think this was just the catalyst I needed for that change. It probably didn’t hurt to be a little prepared (I was a boy scout, what can I say). We were prepared for all of the eventualities we encountered. Thankfully my Garmin InReach remains to be used only as a satellite powered 1990’s level pager.

I hope from this ramble you’re able to pick out useful bits and pieces to maybe motivate you to plan a little journey of your own and explore your very own backyard adventure. I’ve been chasing the pro bike racing life for over 20 years now, when it comes to riding my bike there are very few “first times” anymore. This made me realize that maybe there are many more firsts out there for me, I just need to look a little further down the road.

Be smart and please be safe, but don’t be afraid to push your boundaries a bit, you might be surprised at what’s waiting for you out there (hopefully it’s not a cougar).

Thanks for reading about my long bike ride.