When Giant announced it was moving its Trance platform to 29″ wheels last year, the immediate question on many riders mind was when the longer-travel Reign would follow.

With the Trance’s less-is-more rear wheel travel numbers, the second question was immediately what would the Giant Factory Off-Road Team’s go-to enduro bike look like when it inevitably arrived.

One year later, I was in the small mountain town of Revelstoke, B.C., standing at the top of the 2,000 m Mt. Cartier descent, about to find out.

A small group of media had been heli-dropped just below the summit that morning, along with the newly released Giant Reign Advance Pro 29 0, and a crew from Giant and Fox Suspension.

When Giant first introduced the Maestro suspension design 15 years ago, the Reign was one of three bikes it debuted on. Now in its seventh generation, the Reign looks much different than its predecessors. It’s still very much focused on going fast through the roughest terrain.

To take on the roughest trails, Giant arrived at the very specific rear wheel travel number of 146 mm. It’s less than some comparable enduro race bikes, but it’s actually more than Giant started with when developing the Reign. More travel was added to give the bike more big-hit capabilities, twice during the process of arriving at the final design. I asked if they considered going further to longer travel numbers, but Giant’s designers said they didn’t want riders to get lost in the travel, and liked the quick response that benefits a lighter riding style. Up front, this matches with 160 mm of front suspension, which grows to 170 mm on the aluminum Reign SX model. 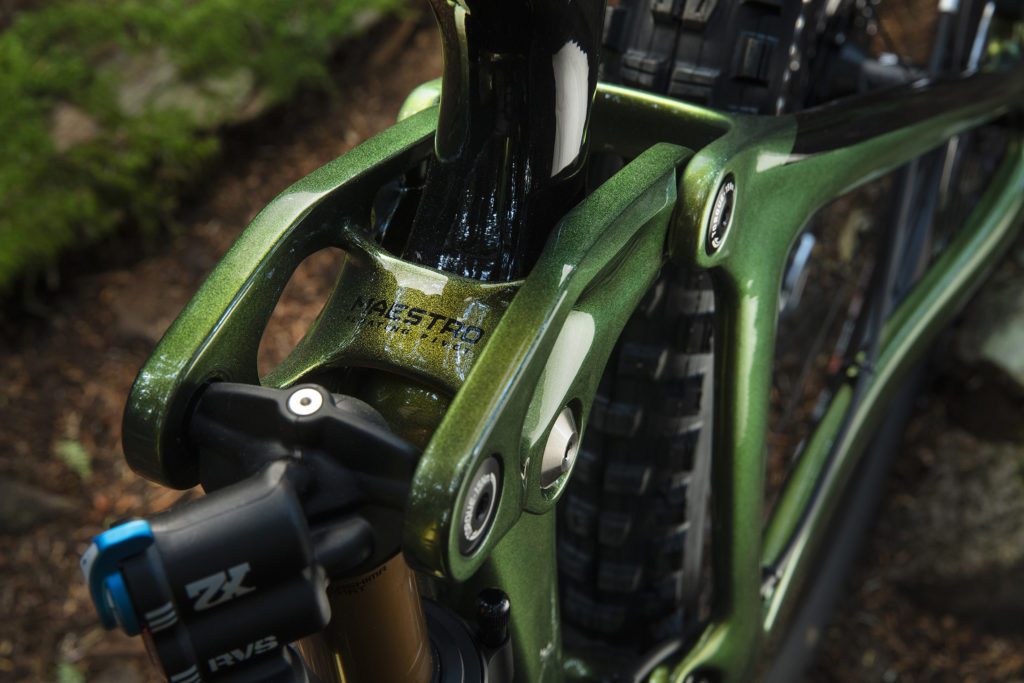 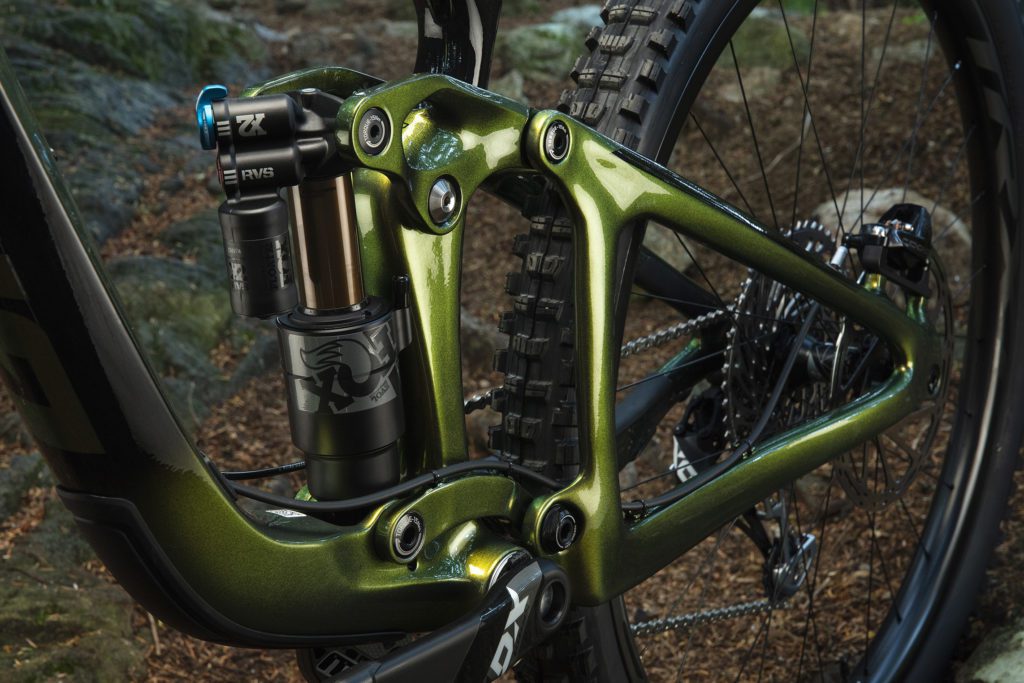 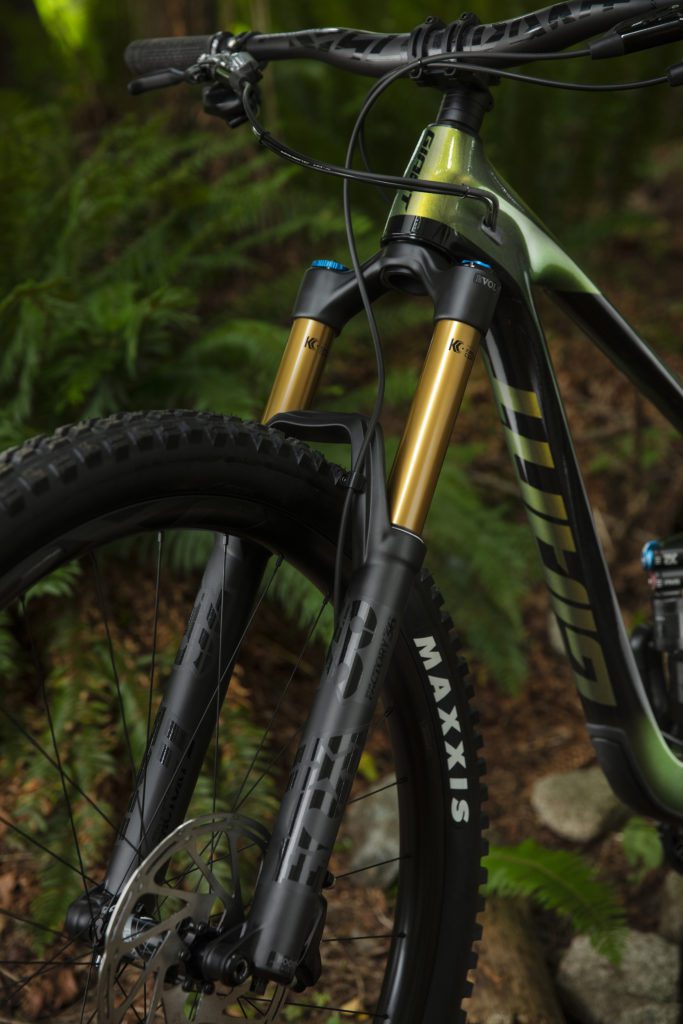 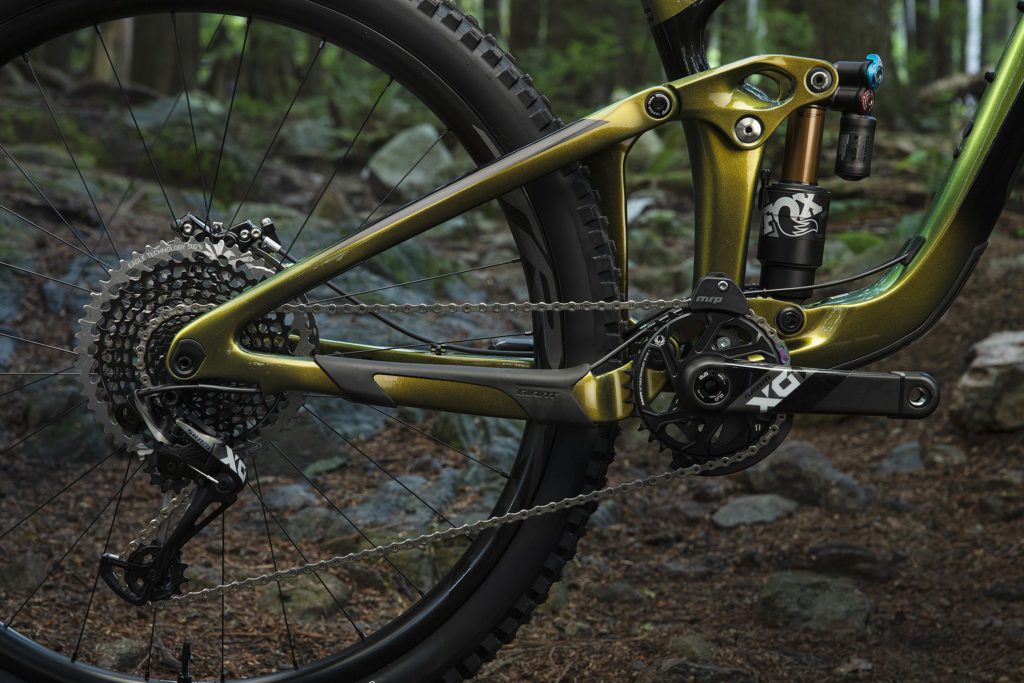 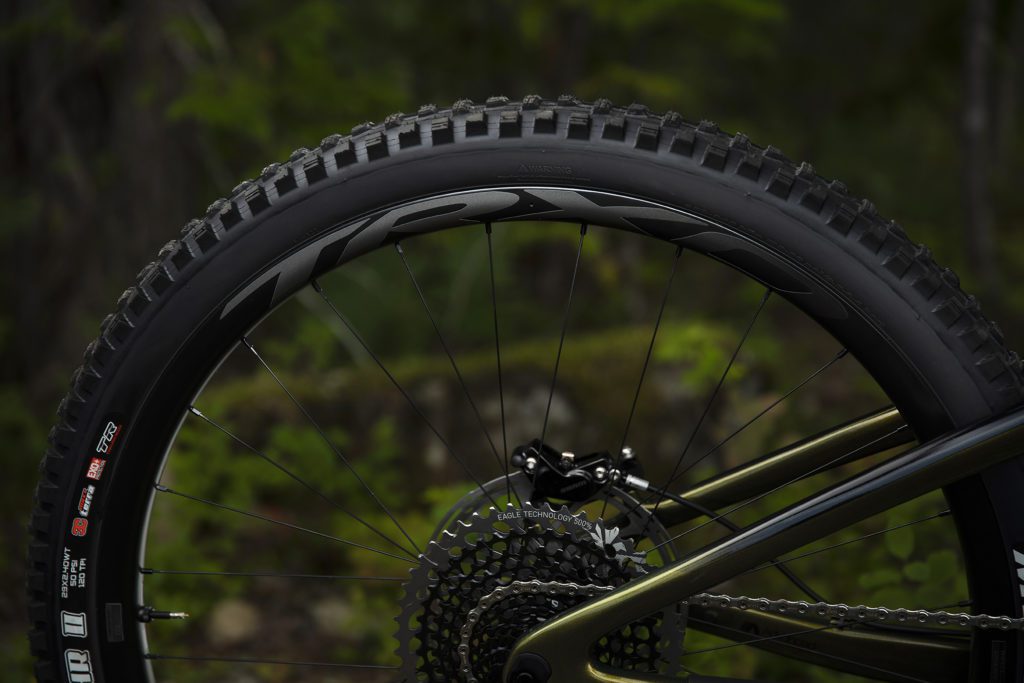 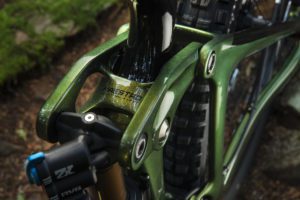 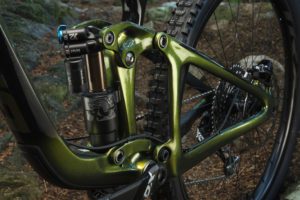 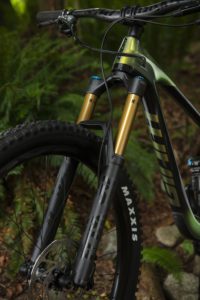 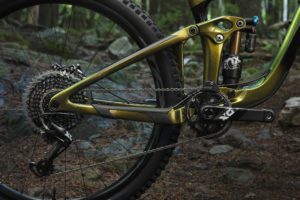 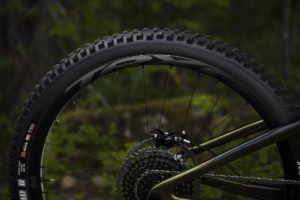 Giant has resisted the long-low-slack trend to an extent, though the XL I rode did have a 516 mm reach, and a solidly slack 65-degree head tube angle.  The bottom bracket drop stays at -30 mm. Over the bike’s two years of development, Giant actually lengthened the Reign’s chainstays to 438.5 mm based on feedback from the GFORT riders. The changed added more stability, especially at high speeds.

Still, the XL bike I rode had a taller feel than some similar bikes. According to Jan Cees Schellenbach, Giant Off-Road’s Chief Commercial Planner, there was an effort to make the Reign as comfortable to climb as possible, without getting in the way of descending capabilities. The Reign is intended to be used by the team as an enduro bike and, Cees reminds us, most of the time in an EWS event is spend climbing.

There’s some interesting small changes to the bikes design that help ascending chops meet descending confidence. The seat tube has been steepened to 76.8-degrees, and the shock linkage has been moved forward slightly over previous years. Moving the shock position allows riders to fit a full 200 mm dropper post in the Reign’s frame, so you can climb efficiently and still get it well out of the way on the downs.

Giant has also moved the Reign to a trunion mounted shock. This creates space in the frame, so that even a small frame will fit a full water bottle in alongside the reservoir on the Reign’s Fox Float X2 shock.

The goal, Giant says, is to make a bike that is intuitive, confidence inspiring, stable and tough. The Reign 29 is aiming to serve both the EWS pros of Giant Factory Off-Road Team as well as be a bike that helps the weekend warrior ride better. It’s a big spread to cover, but the big wheeled bike feels like it can cover a lot of ground.

Our top of the line Reign comes set up ready to race, or ride your local tracks. The full carbon fibre frame and suspension rocker comes with a Fox Float X2 shock and Fox Float 36 with Grip2 damper. The Reign Advanced Pro 20 9 rolls on Giant’s own TRX 0 carbon fibre wheels, wrapped in Maxxis Minion DHF 2.50″ WT and DHR 2.40″ WT rubber, both with EXO+ casing.

The Ride – Heli-dropping the Reign 29 in Revelstoke

Maestro suspension isn’t new at this point. Instead, it has 15 years of steady experience and improvement behind it. The redesigned Reign alone has two years of development to match the suspension platform to the bikes big wheels and intended use.

As you might expect, Giant’s familiarity with Maestro carry forward into the new-look, big-wheeled Reign. The 146 mm of travel is shorter than some enduro bikes but, like last year’s Trance 29, Giant says it will feel like more while also staying light and responsive on the trail.

Our time on the Reign starts with a few short rides on Revelstoke’s Macpherson trail network, getting used to corners and small jumps on Flowdown and an assortment of other trails. The bikes slightly taller stature and length took a few corners to get used to, but reward a more forward riding style.

After a nice warm-up, the second day on the Reign gets serious fast. It starts with Glacier Helicopters meeting us at Eagles Pass Lodge, and a quick safety meeting before we’re in the air.

Having never been in a helicopter before, I’m giddy the moment we lift off the ground. This lasts as we make our way across the valley towards the imposing wall of a mountain that is Mt. Cartier, and as we set down on the landing pad, which is barely the length of the choppers runners.

After that ride, the bar is set high for the Reign 29.

The helicopter drops over the edge and disappears into the valley blow. It’s quickly lost in the vast peaks of the Monashee mountains.

Our group is left alone with the Reign 29’s, and the guidance of Matt Yaki and the Wandering Wheel crew. There’s 2,000 m of elevation loss waiting below us and, after exploring the old fire lookout at the peak, we drop in. While our time on the Reign 29 is mostly going to be on one trail, there’s a huge variety of terrain between the summit and the water below.

Tight, euro-switchbacks lead to techy roots and side hills, then steep natural and rough sections of roots and tight corners. Cartier is a veritable buffet of trail crammed into 15 km of continuous descending. At the end of all this, we get a few kilometres of newly-built flow and jumps on Revelstoke’s Sunnyside trails.

Riding all of this blind on a new bike is a great test of Jan Cees’ claims that the bike is intuitive, confidence inspiring, and easy to get on with. Cartier isn’t a purpose built mountain bike track, and requires the Reign 29 to make quick line changes when what you thought was coming next, turns out to be something completely different. There’s few drops, but it is big terrain and a big descent and, riding blind, results in more than occasional bigger hits than planned.

One of the benefits of Giant’s Maestro suspension design is how its low progression ratio keeps it responsive through the travel, and especially through corners. There’s plenty of tight corners and occasional high speed sections, but not a berm in sight. The Reign Advanced Pro 29 0 handles this all well, and tracks well through rough corners. When we hit the Sunnyside trails flowing jumps and berms, it’s quite happy there, and easy enough to move around in the air.

Cartier’s not an easy descent, and the Reign 29 took it all in stride. While it’s a big day, it’s not enough to give any final verdict on the big-wheel Reign 29 wheel design. It does give some credence to Giant’s claims that the bike is designed to be intuitive and easy to ride. With limited time to set up suspension, I was able to get comfortable enough on the shimmering green frame to really enjoy the descent, instead of feeling on edge the whole ride. It’s a promising start for the brands new enduro bike, for sure. 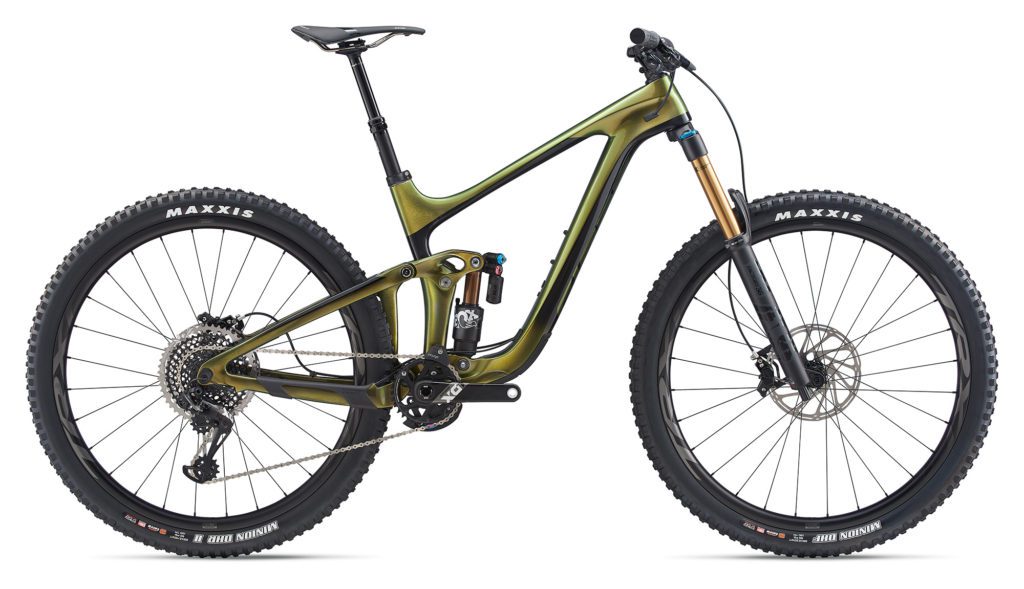 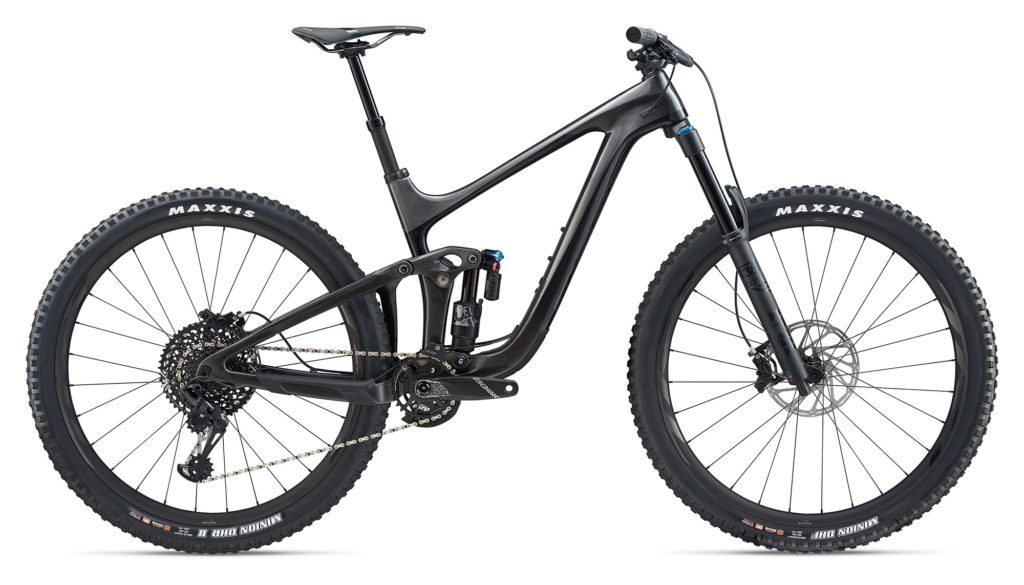 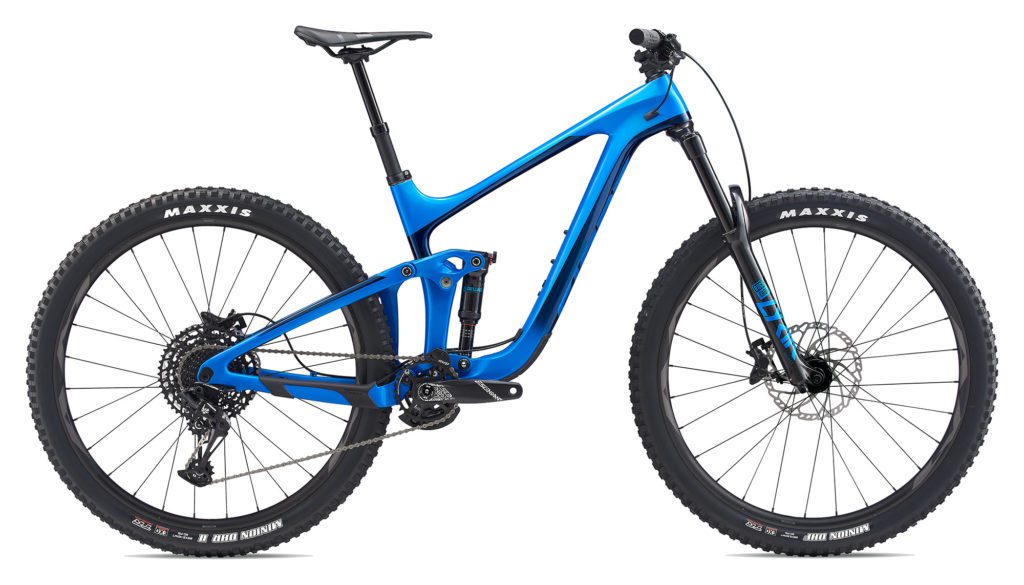 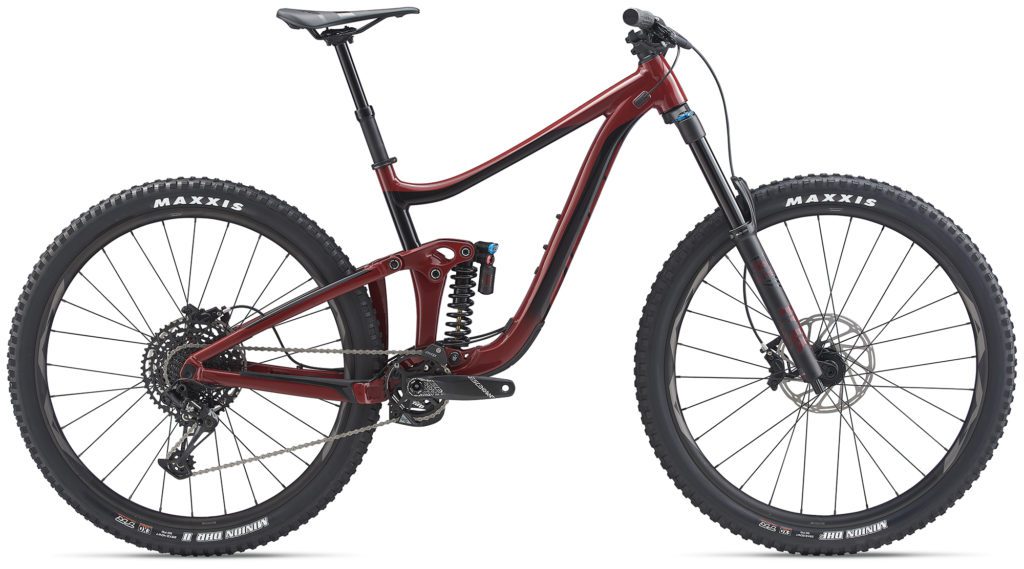 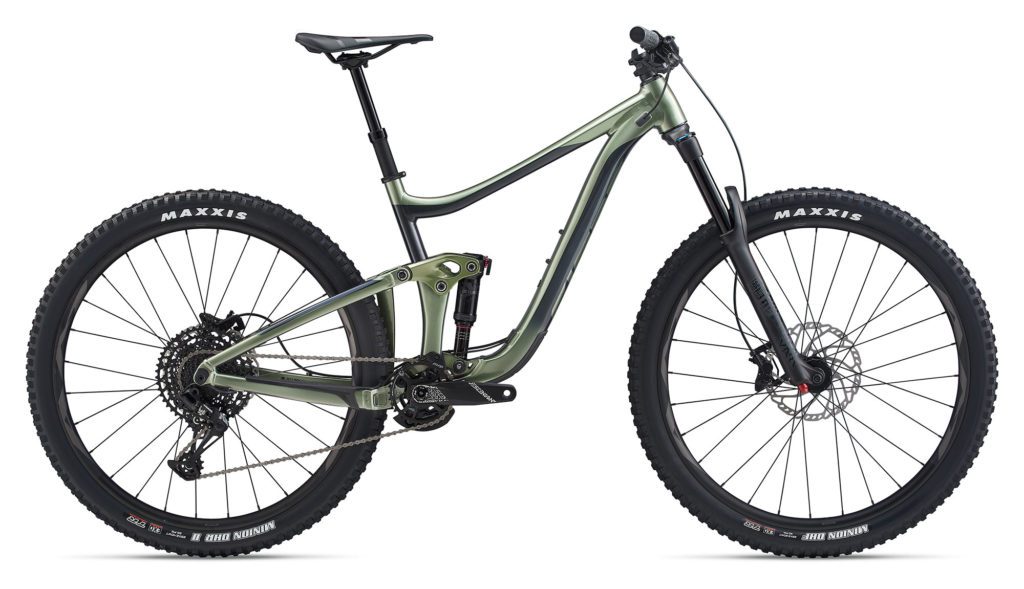 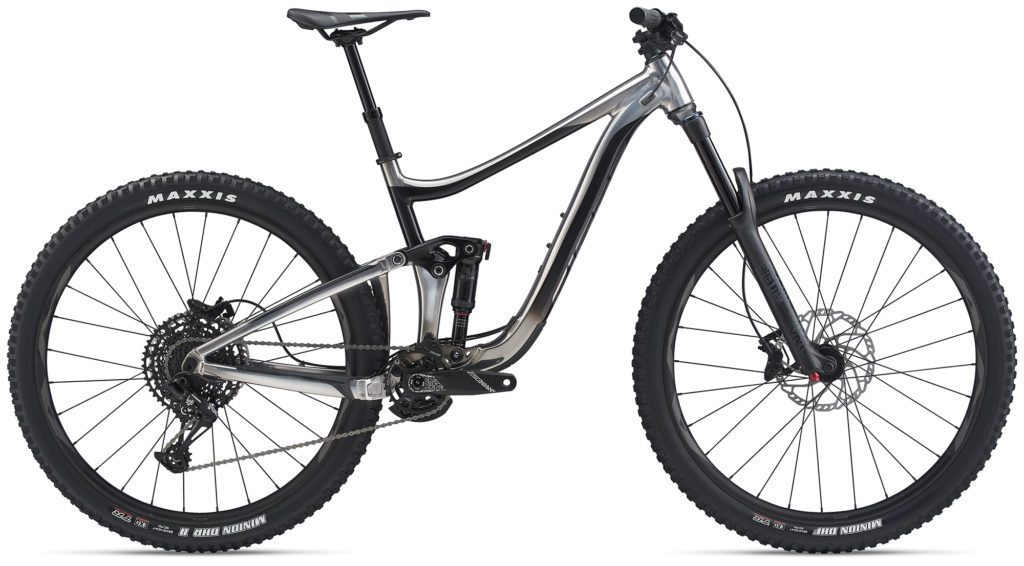 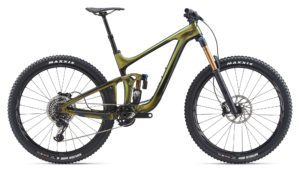 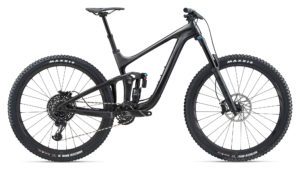 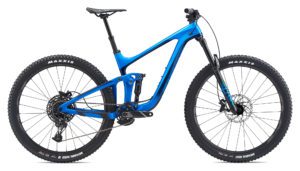 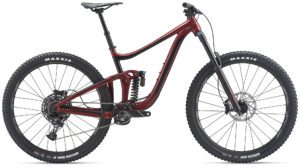 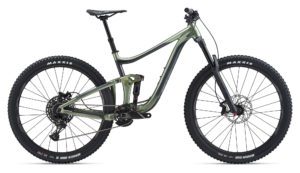 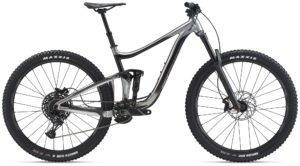 In Canada, there will also be the Reign 29 2. This version comes with an ALUXX SL aluminum frame and carbon fibre Maestro suspension rocker link.