Trek has lofty ambitions for the 2021 Slash. It’s the first major rework of the enduro race bike since the Slash moved to 29″ wheels in 2017. The U.S. brand wants to bring the Slash up to speed on the Enduro World Series circuit without losing its more fun, trail bike alter ego.

Balancing a long travel race bike with trail bike agility is a big ask. Trek’s building off an already successful model though, not starting from square one. Can the Madison, Wisc.-brand retain the all-rounder abilities while refining the Slash’s race pedigree?

The 2021 Trek Slash is slacker in the head tube by one degree, but it is significantly longer. Reach grows between 20 and 30mm, depending on size. More reach and longer travel – 10-mm more on both ends for 160-mm rear and 170-mm front – make for an overall longer bike than previous years.

All of this makes it very easy to get comfortable pushing the Slash faster, sooner. The added reach and overall length add stability at speed. The Slash is happiest going full tilt, especially when the trail gets rough. Hold on, dig in and the Slash will plow through quite a bit of rough trail. But the rear end of the Slash really seems to reward a more active riding style. Pump and push into the trail for speed, and the Slash will accelerate every chance it gets.

Some of the credit for this quick acceleration goes to the 9.9 XO1’s lightweight build. There’s carbon fibre parts everywhere you look, from Bontrager Line Elite 30 rims and cockpit to the SRAM drivetrain. Despite it’s svelte build, for an enduro bike, the Slash never feels like it’s bouncing around under you at high speeds or over rough trails.

RockShox’s excellent Zeb Ultimate deserves some credit for the Slash’s stability and speed. The Zeb makes fast feel comfortable. The beefy-stanchioned fork keeps the wheel stuck to the ground impeccably, tracking and maintaining traction tirelessly, until you decide you want to get the front tire off the ground. Traction translates to speed, whether you’re trying to carry momentum through a root-covered corner or smooth out big hits and rough trails.

All this speed on the descents is great, but you still have to get to the top. If you’re at an enduro race, that involves pedalling. Trek’s worked hard to steepen the seat tube angle on the Slash, up to 75.6-degrees, to make sure climbing is as comfortable as possible. Building the frame around a shorter 35mm stem helps, and the Slash’s climbing position is comfortable. My riding position kept my weight balanced in the middle of the bike well enough to make steeper corners and getting up trickier features possible.

The Slash’s pedalling is as efficient as you might expect from a long travel bike. It’s not perfect, but it’s not bad either. Plus, Trek makes the lockout lever very easy to reach on extended climbs. 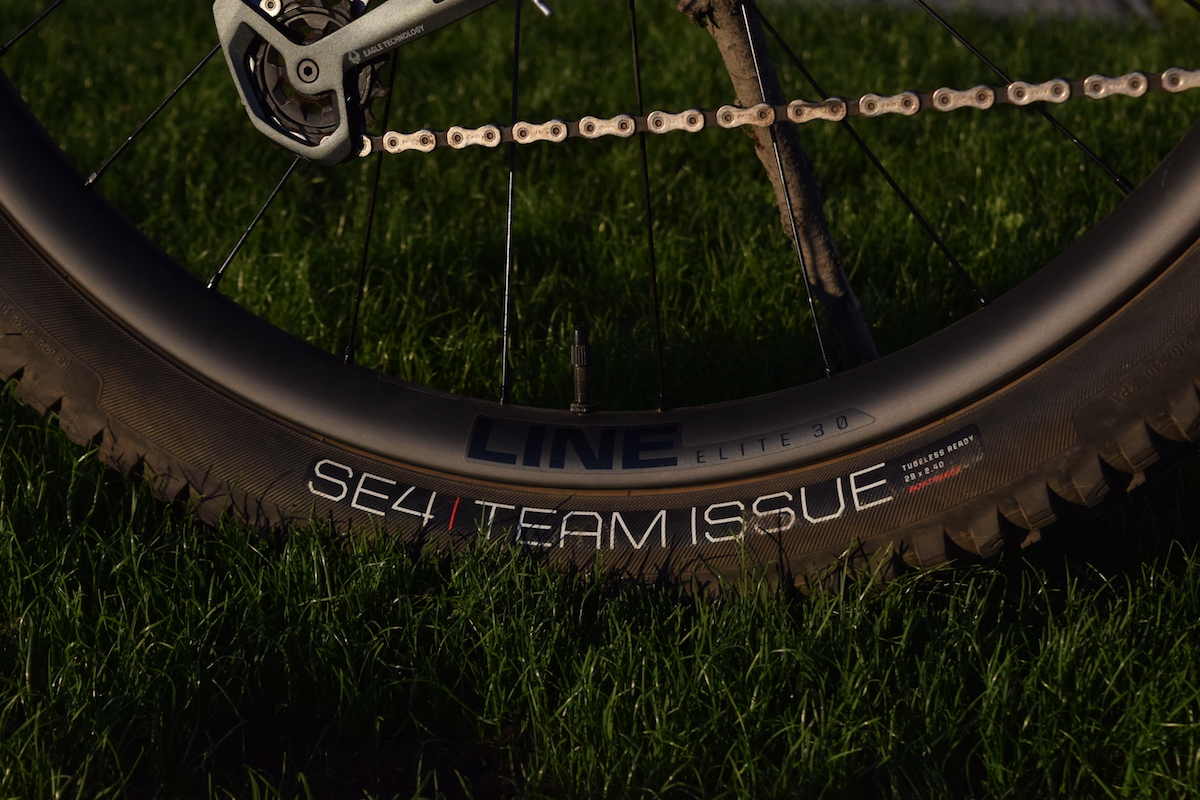 The Slash 9.9 XO1 build, including Line Elite 30 carbon fibre wheels, is race light. This could help the bike feel more playful, and it definitely helps it accelerate up to speed. Bontrager Line Pro carbon fibre bar and stem anchor the cockpit, while the wide Line Elite 34.9 dropper post feels solid. 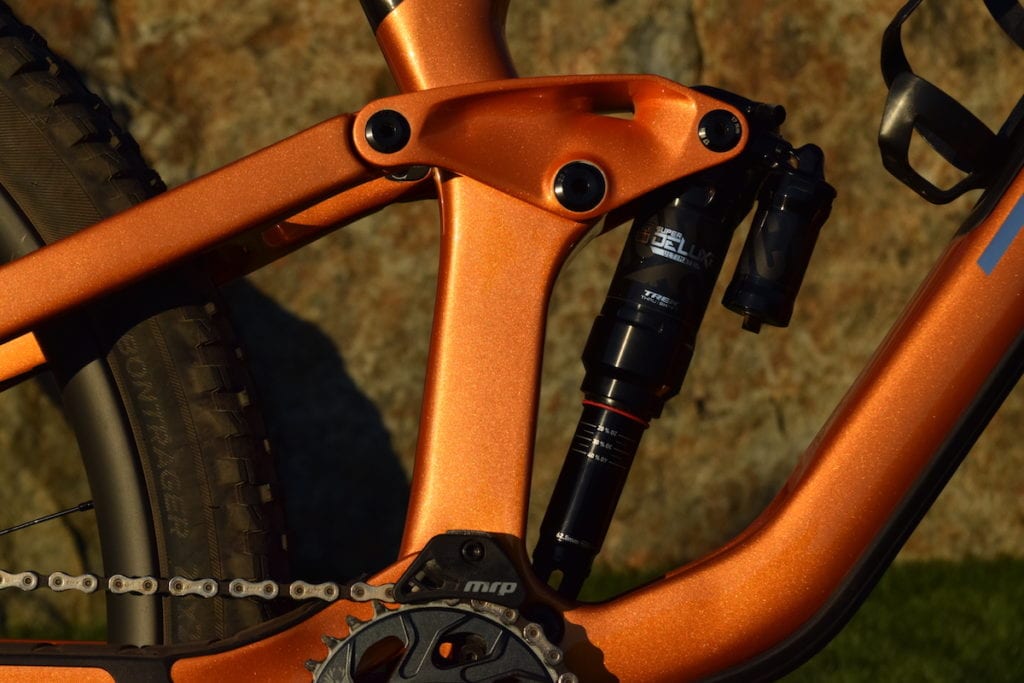 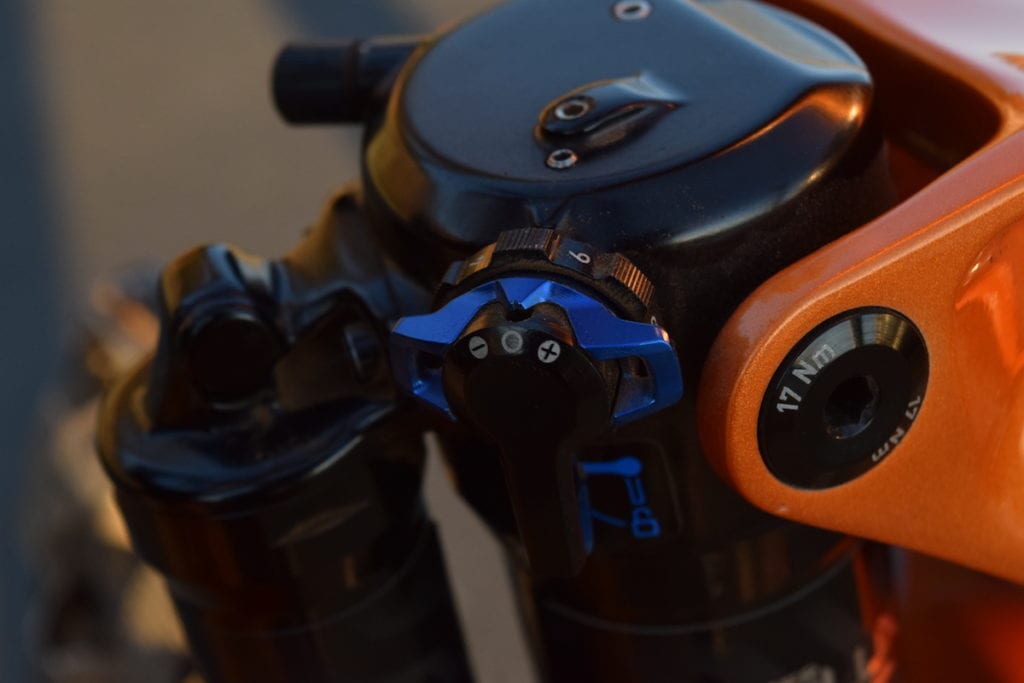 An adjustable, three-position open setting is in addition to the lock-out lever 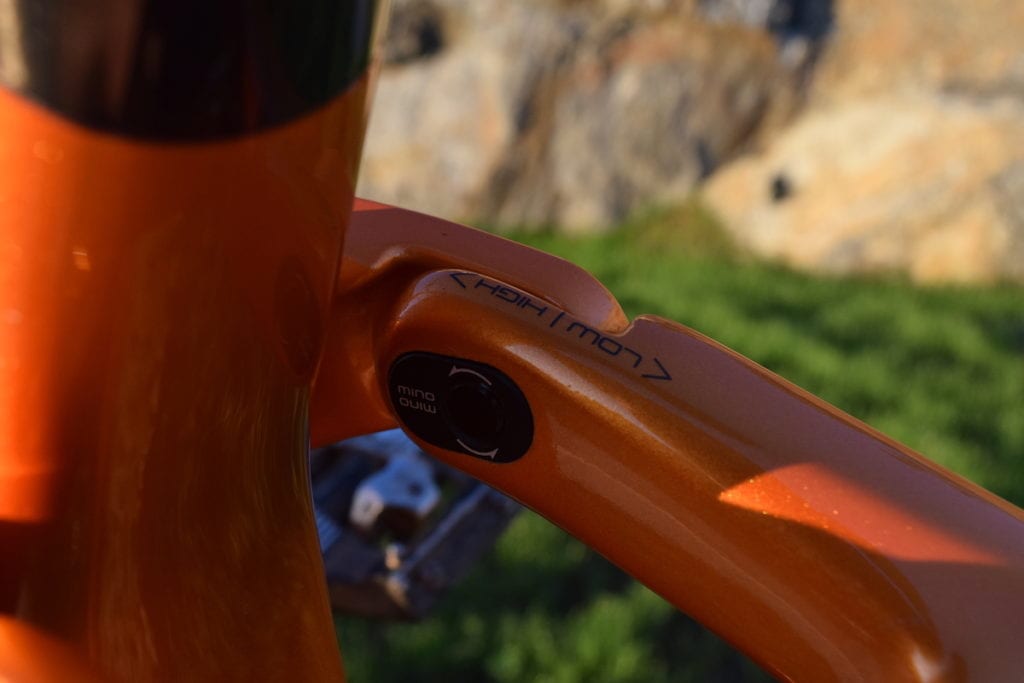 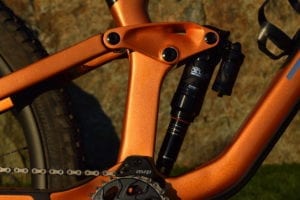 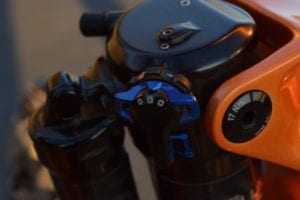 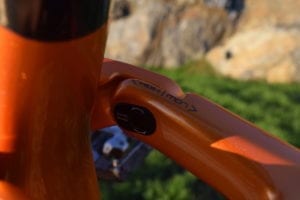 Trek sticks with its Thru Shaft shock design for the new Slash, this time via RockShox’s Super Deluxe Ultimate shock. RockShox design already has a bunch of interesting features, like the ability to adjust the negative air spring, and the Thru Shaft is supposed to make the shock even smoother to engage.

Trek also worked with RockShox on the Thru Shaft specifically for the Slash. While the two brands were reworking the shock, they decided to make a couple tweaks. Like moving the lockout and adjuster knobs to an off-center position on the shock. This makes them easy to reach, without putting them somewhere you’ll accidentally bump them out of position and, say, lock-out the shock when you don’t want to. It did make me much quicker to reach for the lock-out on climbs when I knew I could find it again just as easily. There’s also a clearly numbered rebound dial, which is a nice touch.

There’s also a three-position adjuster when the shock is in the open position. This is supposed to tune the Super Deluxe to the type of riding your doing. Neutral for all conditions, “negative” for steep, challenging trails, and “positive” for flow trails, berms, and fast bike park-style riding. The adjuster for this is easy enough to reach but, again, solid enough that you won’t accidentally bump it out of place. Which is good, as it makes a very noticeable difference in how the shock feels.

This is something I’m still getting used to, and learning when I want to change it versus when I should just leave it alone and ride. It is an interesting concept though since it does make a tangible difference in how the shock functions. I’m curious to see if I’ll start using it more, or just find a favorite setting and mostly leave it there.

The original Knock Block design was a sticking point for many on the previous Slash. Some liked the idea, if not the execution. Others weren’t thrilled that it limited what stems you could use with the frame. Knock Block 2.0 is a vast improvement. I came in prepared to be annoyed, and, with its significantly improved 72-degree range (over the previous 58-degrees) barely noticed. The bars turn enough to get around the tightest corners.

And, if you’re still not sold, Trek has ditched the Straight Shot downtube, so you no longer have to run Knock Block 2.0 if you don’t want to. You can ditch the system and use any stem you like. 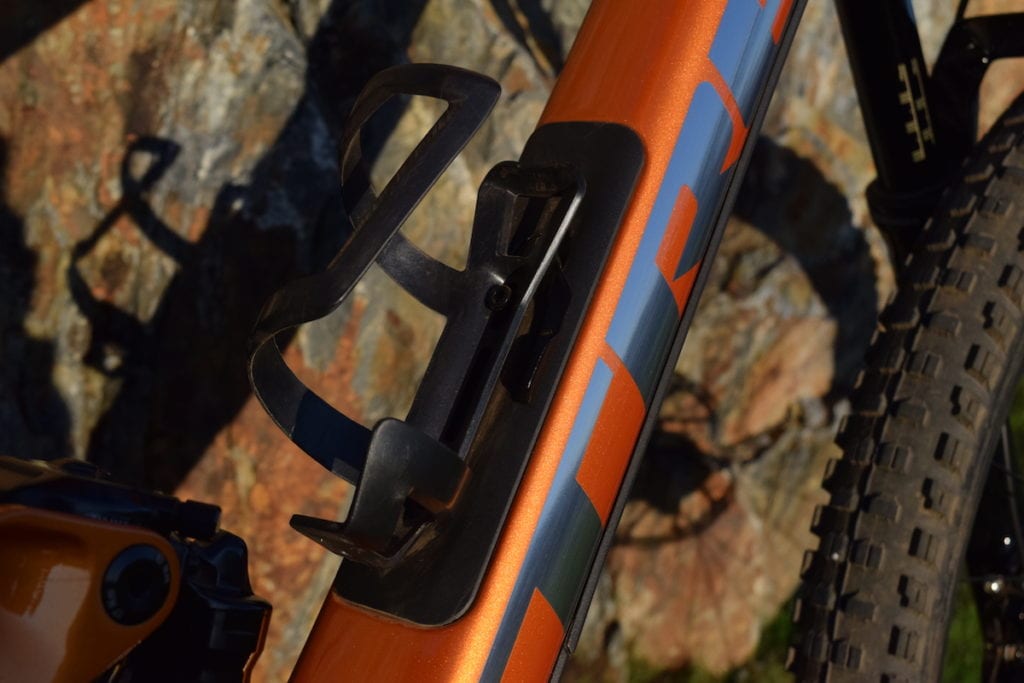 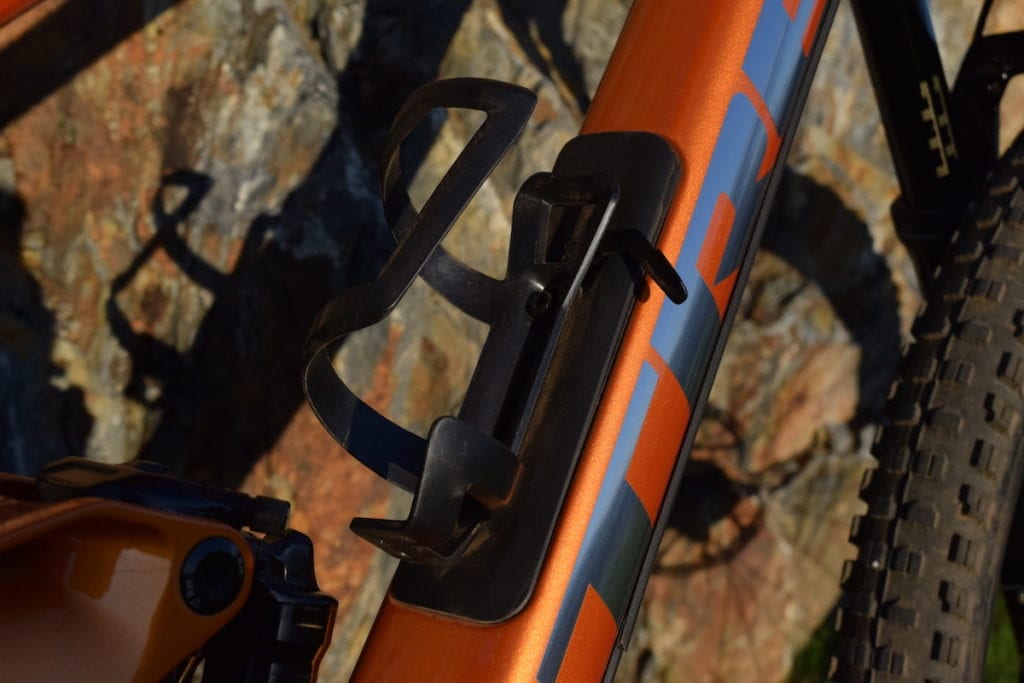 The lever is tocked away so it won't open accidentally, but still easy to use. 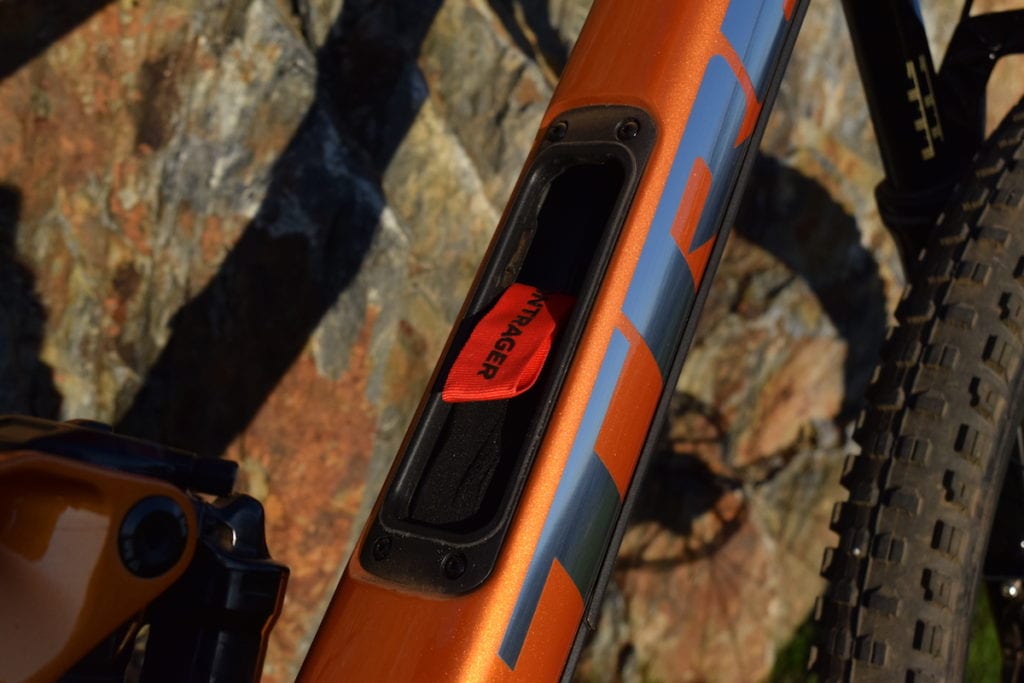 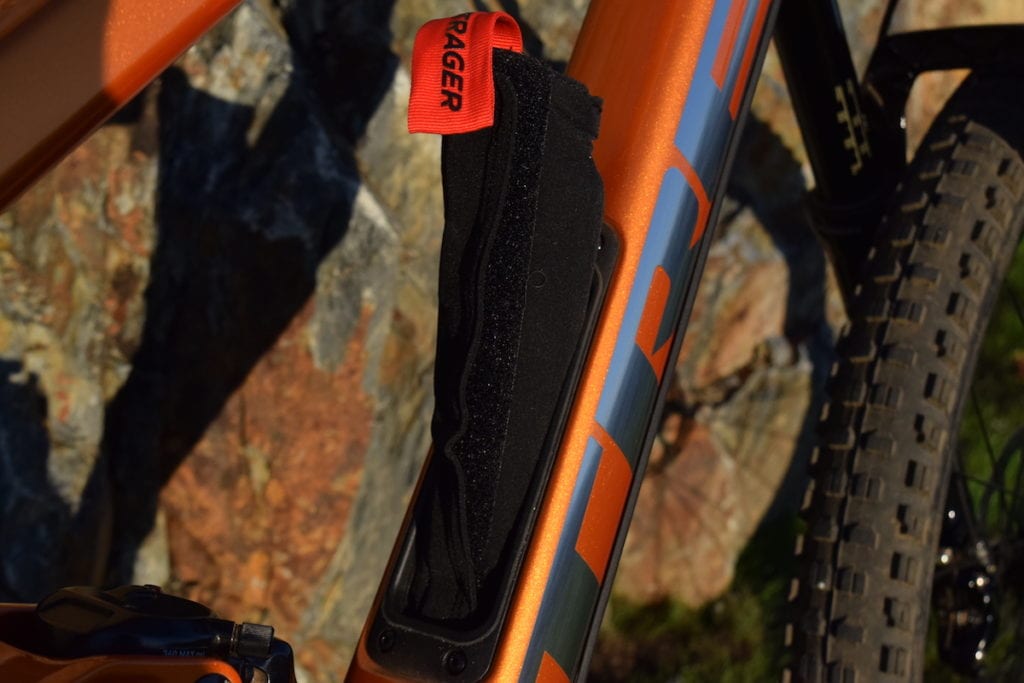 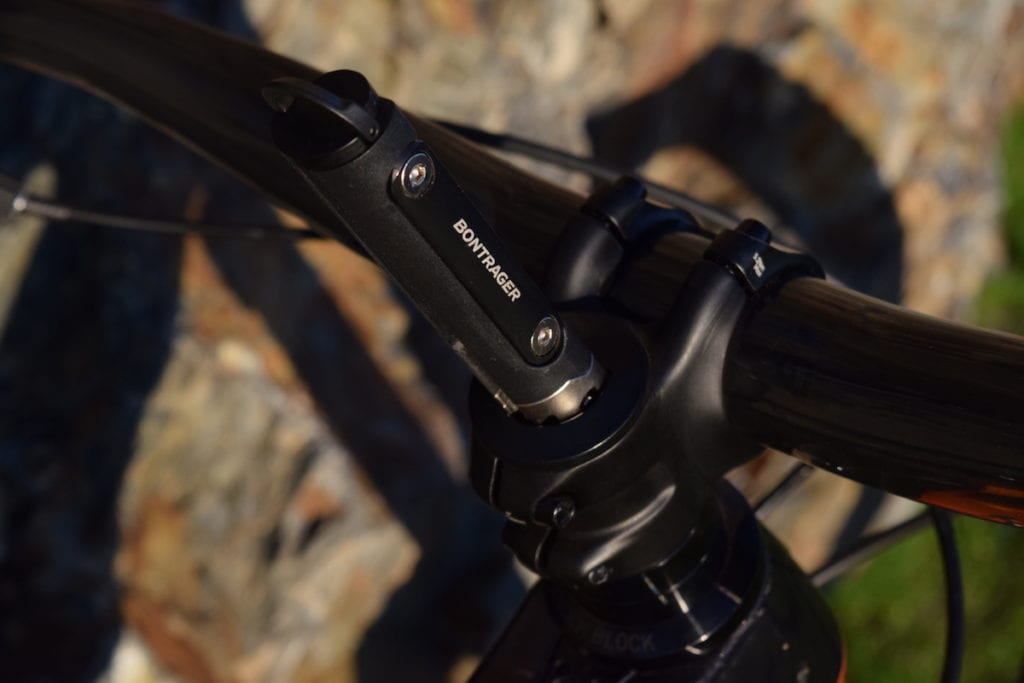 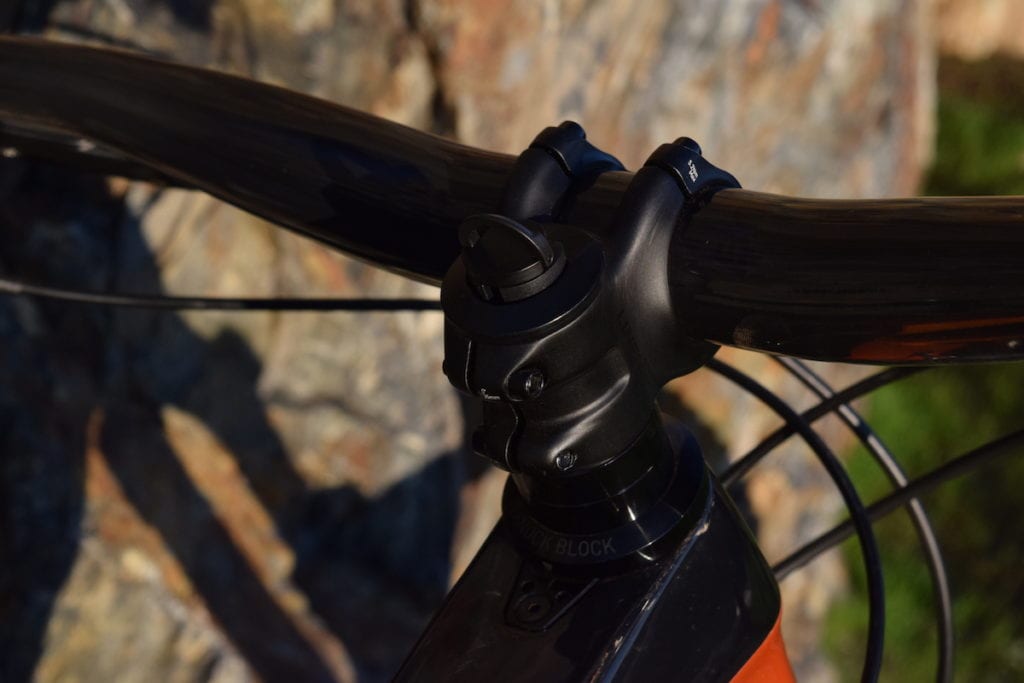 The multi-tool and chain breaker fits snugly, and quietly into the steerer tube. 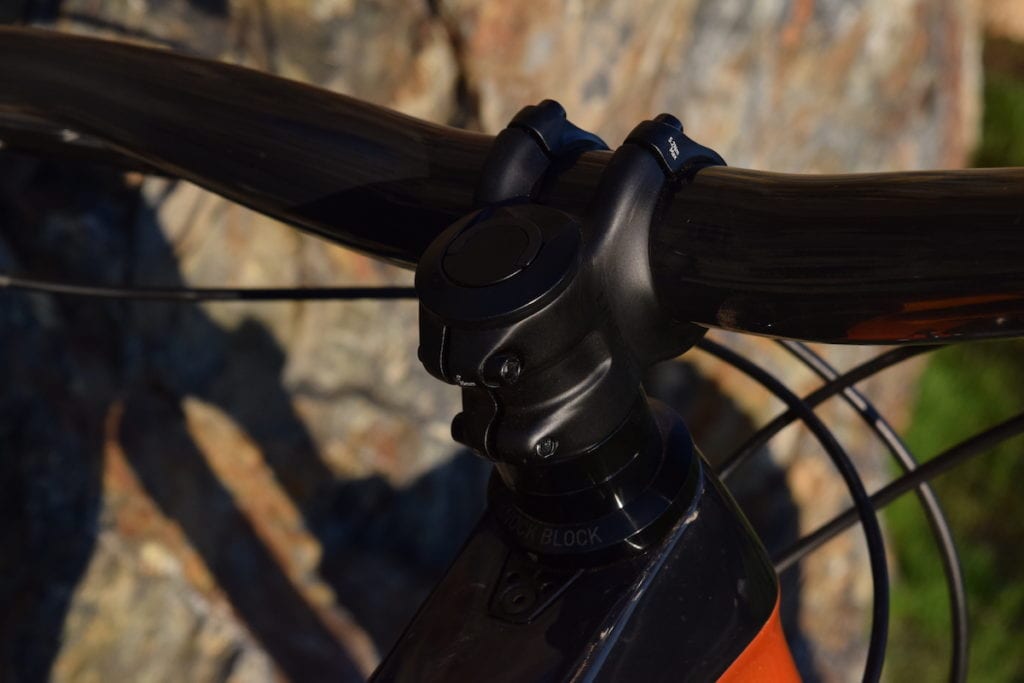 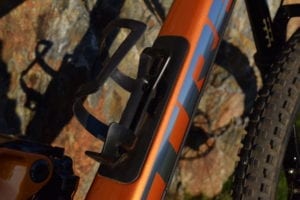 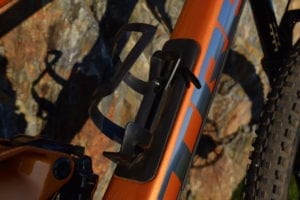 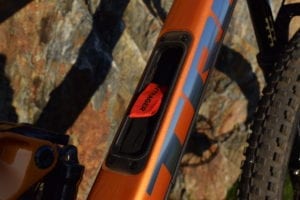 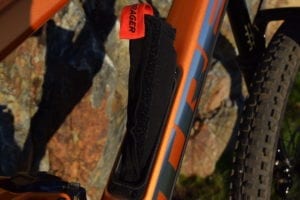 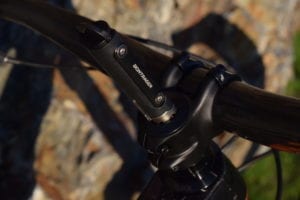 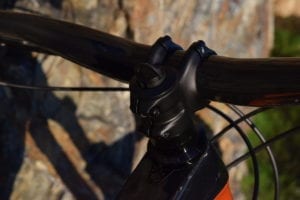 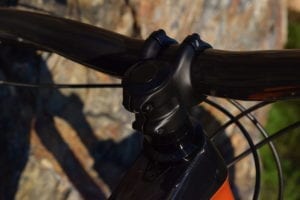 In-frame storage is not something I thought I’d like as much as I do. It’s great always having things, and having them securely and safely stored. The Bontrager tube sleeve, with room for tire levers and a CO2, takes that to another level. Trek’s not the only brand doing this, or the first, but as with some of those other frames, I do appreciate having that load taken off my back and not feeling unprepared.

Full downtube protection is appreciated. There’s nothing worse than the sound of a rock clacking off of a carbon fibre frame just above where the downtube pad ends. Making the upper, tailgate pad portion removable is a nice touch, for those that want to show off the frame. 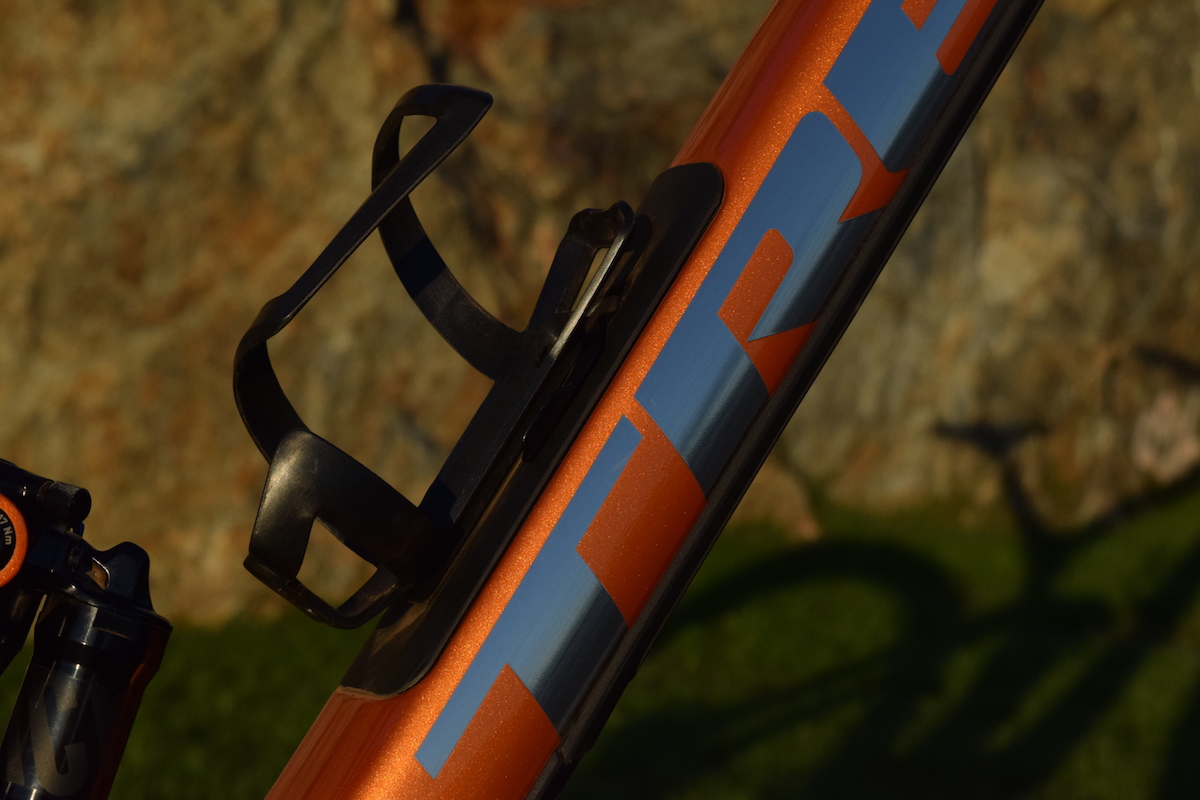 While frame colour isn’t a matter of performance, the copper and brushed silver finish on the Slash 9.9 XO1 is stunning. It’s loud, for sure, but Trek offers more subdued options if you’d like to be more subtle at the trailhead. Or go the opposite direction and say anything you want, as loudly as you want with a Project One custom paint job.

A more minor note is that the Slash has great heel clearance. I somehow rub my heels on most frames. Not necessarily while pedalling, and not always noticeably. But, after a few big rides, there’s always evidence that I’ve been rubbing my heels at some point. Not so with the Slash. There’s not even a scuff on the seat stays after numerous rides. 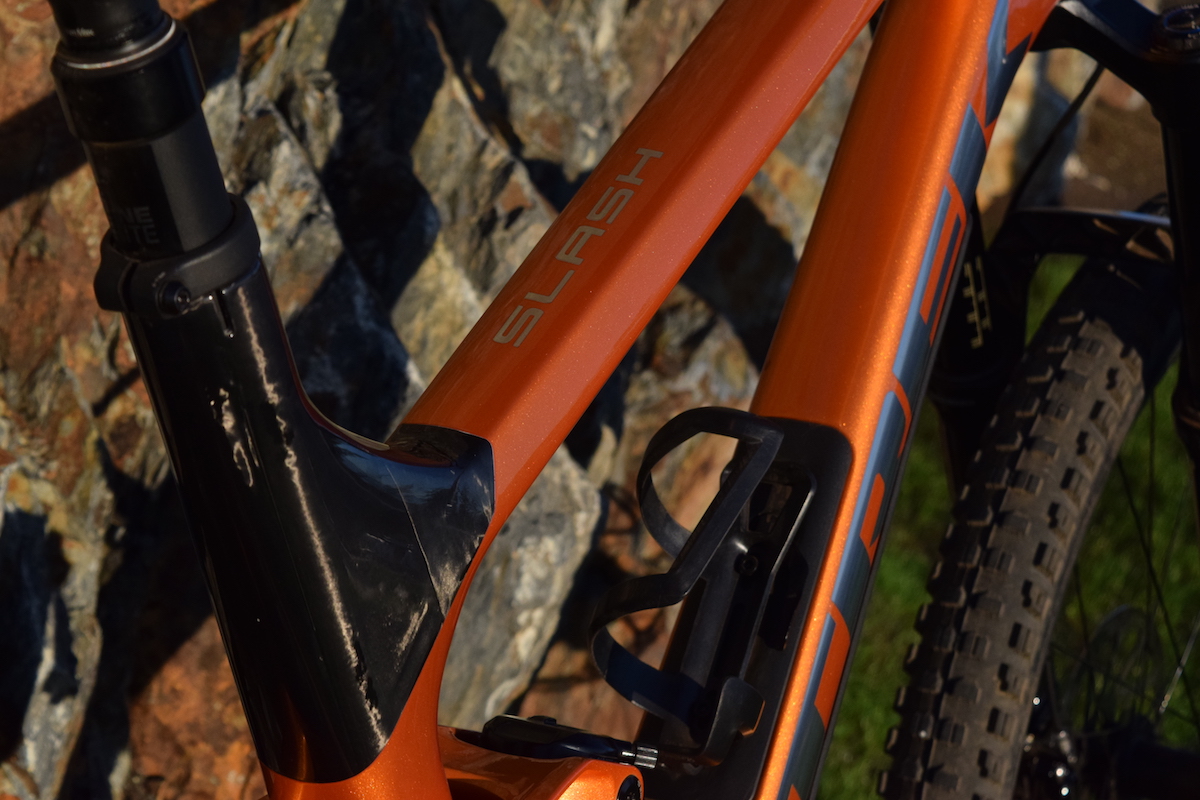 Well, the Slash doesn’t leave alot to be desired. The frame and features are well thought out, and I’ve yet to run into any major problems.

The seat tube could be lower. I like having the long travel dropper post, but at 6’4″ on an XL frame, I’m right at the limit for how low I can run the Line Elite post. A steeper, or deeper seat tube might help those on the shorter end of their size. Trek’s definitely made improvements here, but there is still a limit to how far you can get the post into the frame.

The Zeb fork is built for speed. It does that exceptionally well, but it is slightly heavier than it’s skinnier siblings. This occasionally makes it slightly harder to get the front tire up off the ground. The trade-off for its performance in every other setting, though, is totally worth the weight so far.

Could Trek have been more extreme with its geometry? Sure, but it doesn’t feel necessary. The frame never felt like it was holding me back, even on steep or really chunky trails. In fact, it felt very engaged on some of the steepest trails I ride. The Zeb and Super Deluxe do a great job of keeping the Slash in control. Plus, the bike still feels fun when the trails aren’t pushing the limits of my skills. Again, the top-end 9.8 build’s light weight helps here. But the Slash doesn’t feel sluggish or bored on easier trails. Plus, with the option to bump the fork up to a max 180-mm, you can make it slacker if you like. 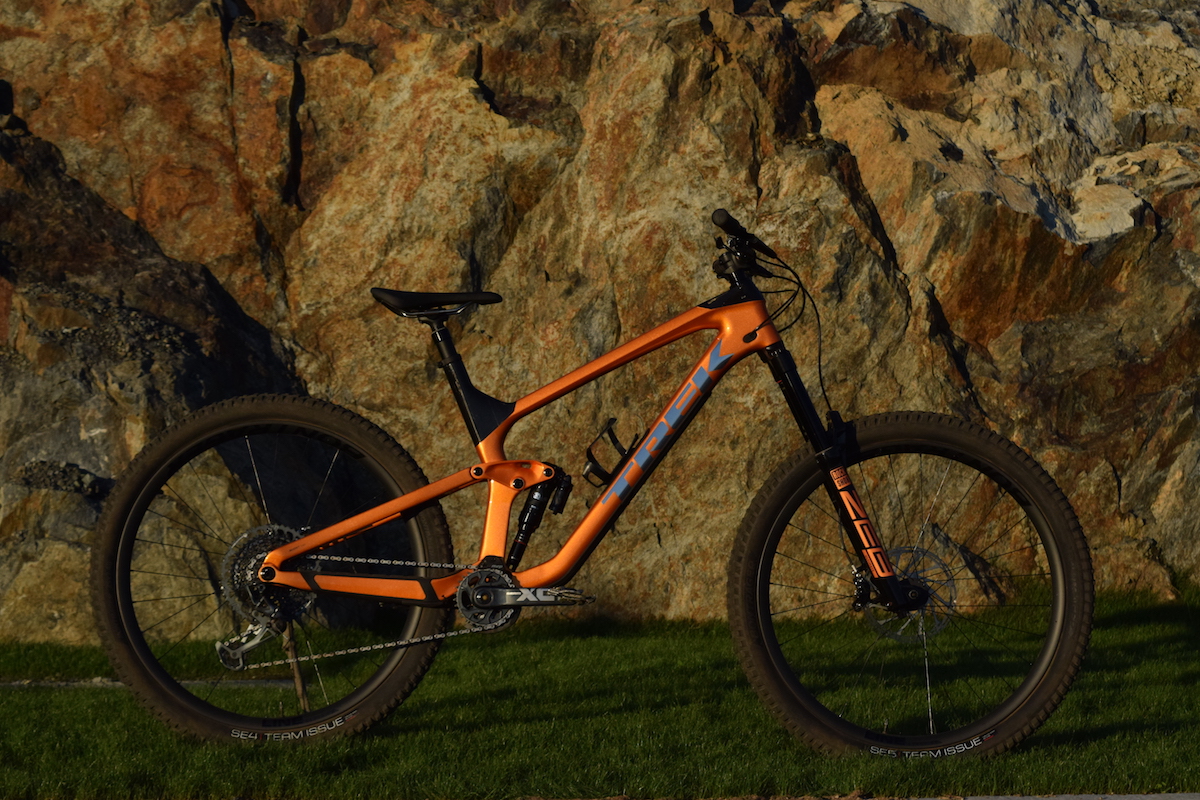 Does Trek step up the Slash’s enduro race pedigree? Absolutely. As one friend put it, the bike looks fast even standing still. The Slash backs those looks up on the trail. It’s happiest when it’s going full tilt, and picks up speed with ease. Even on very familiar trails, I’ve found myself coming into with more speed than expected – and making it out just fine.

Not every ride is about racing, but going fast is fun. And, with quick acceleration, aggressive geometry, and comfortable riding position, the Slash really likes to go fast.  Chill out the pace a bit and the Slash is still responsive enough to make it fun to play around on at trail speed, or on more relaxed trails.

I’ve only had the Slash a few weeks, but in that time I’ve been steadily checking off trail features and sections that have confounded me in the past. Not just fast features, either. The Slash is confident on slow, janky trails. I’ll be trying to check off as many more problem-features as possible before I have to return the Slash.

Trek’s Slash 9.9 XO1 retails for $10,400. But, with two aluminium models starting from $4,500 and three carbon fibre options, Trek covers a wide range of prices for its enduro sled.