Whistler’s Canadian Open Enduro is always one of the most demanding race days on the Enduro World Series calendar. With overnight rain and massive descents, this year was even more exciting.

Canadian’s rose to the occasion, racing on home turf in tough conditions. Andréane Lanthier Nadeau (Rocky Mountain Race Face) was on the podium in the pro women’s race. Her teammate Remi Gauvin was fifth in the men’s race. In the under-21 races there were two Canadians on each podium, with Lucy Schick and Jack Menzies winning for the home crowd.

Whistler EWS moved up to two days for 2019. Racing started Saturday with the massive, Top of the World stage. Isabeau Courdurier’s (Intense Mavic Collective) winning time of 22:32 put her in the early lead. The French rider has won every round in 2019, and looked like she was ready to ride away with the race in Whistler.

Racing just 40 minutes drive from her Squamish, B.C. home base, Andréane Lanthier Nadeau wasn’t ready to let the day end there. The Canadian earned two stage wins on Sunday and, after a crash by Courdurier, looked like she might challenge for the win.

Noga Korem (GT Factory Racing) was also in the hunt, however, and rode consistently in the wet conditions to claim second behind Courdurier. Lanthier Nadeau crossed the line in third, just 29 seconds behind Courdurier after 62 minutes of racing.

While Lanthier Nadeau has multiple EWS podiums to her name, it was her first time on the podium at the home-country event.

“I think it was my hardest day of the season so far,” said Courdurier, who currently leads the overall series. “I really struggled since the first stage this morning. I went off track, had to get back up, get back on the bike. Then on the very last one I really crashed super hard and lost a lot of time, so I really thought, ‘Ok, it’s done. You’re not going to win this one. But you have to make it down anyway so just keep pushing,’ and I was really surprised to win this one. I’m really, really happy.”

Richie Rude (Yeti / Fox Shox) made his intentions known right away in Whistler, winning the Top of the World stage by 30 seconds. Rude has won the event before, in 2015 and 2016, and looked on track to return to his throne. Sam Hill (Chain Reaction Mavic) and Ed Masters (Pivot Factory Racing) were on the move, though, chasing the American all Sunday.

“Everything was pretty sloppy after the rain…Line of Control and this last one up higher were pretty wet, and some of the roots were little snipers,” Rude said, after overnight rain rewrote the race conditions.

While Rude was battling for the win, the crown was throwing their support behind Jesse Melamed. The Whistler local was making an unlikely return from injury, breaking his ankle and hand just weeks ago at EWS Val di Fassa, Italy.

“I missed it last year, and this is my home race,” said Melamed, “Everyone supports me, and I just feel like I belong inside the race tape. I had to give it a shot, and it was kind of day by day. I felt OK enough to go for it, so I did and it paid off. I’m super thankful for everyone cheering for me and I had a great day.”

Melamed held on through six massive, demanding race stages to finish his home town Enduro World Series stop. While riding to survive, not hunting for the win, he did still finish third on Stage 3 Sunday.

“I couldn’t stand another race on the sidelines,” Melamed said in the finish corral. “We knew I wouldn’t be doing any further damage,” the Whistler-local said of his quick return, “That’s why I was able to do it.”

While Melamed was winning crowd favorite, his Rocky Mountain Race Face teammate Remi Gauvin was making a run for the win. Gauvin rode consistently all day to claim fifth.

Richie Rude held on for the win, with Sam Hill second and Ed Masters third.

Rhys Verner (Kona Factory Team), also from Squamish, crossed the line to loud cheers, in 17th. McKay Vezina (Giant Factory Off-Road Team) was 20th, after spending a long time in the hot seat. Melamed was an impressive 29th in his comeback race.

Canadians in control – Under-21 men and women

Racing on home soil always seems to work out well for Canadians, who are accustomed to the more technical, gnarly Whistler trails. Local riders were first and third in both the men’s and women’s under-21 races.

Lucy Schick won the under-21 women’s race ahead of Isabella Naughton (U.S.A.). Schick was joined on the podium by Julia Long, in third. 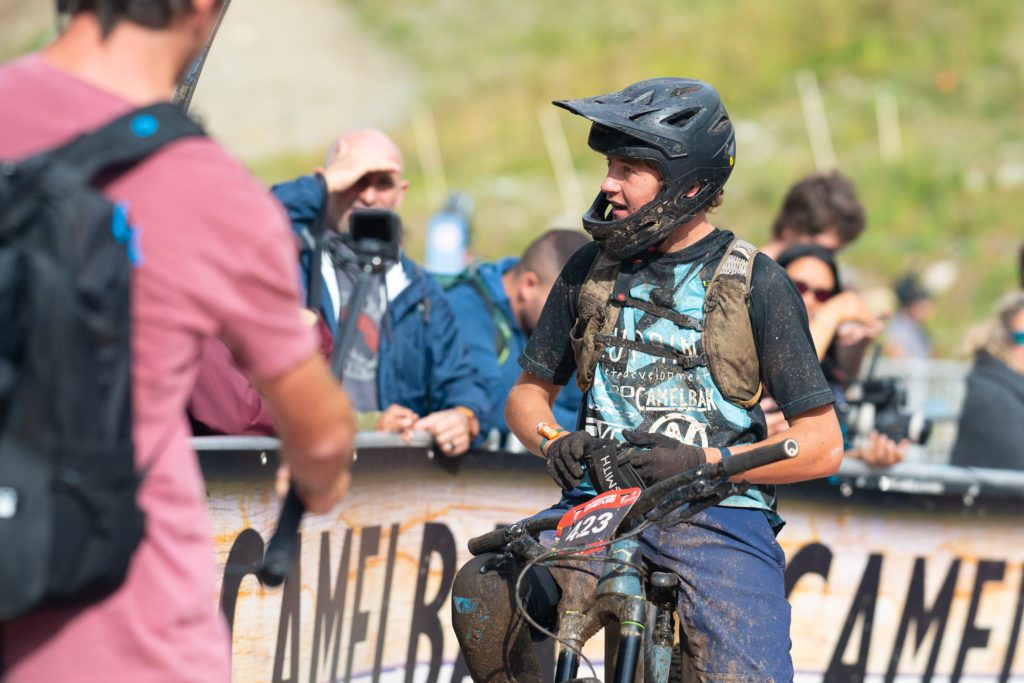 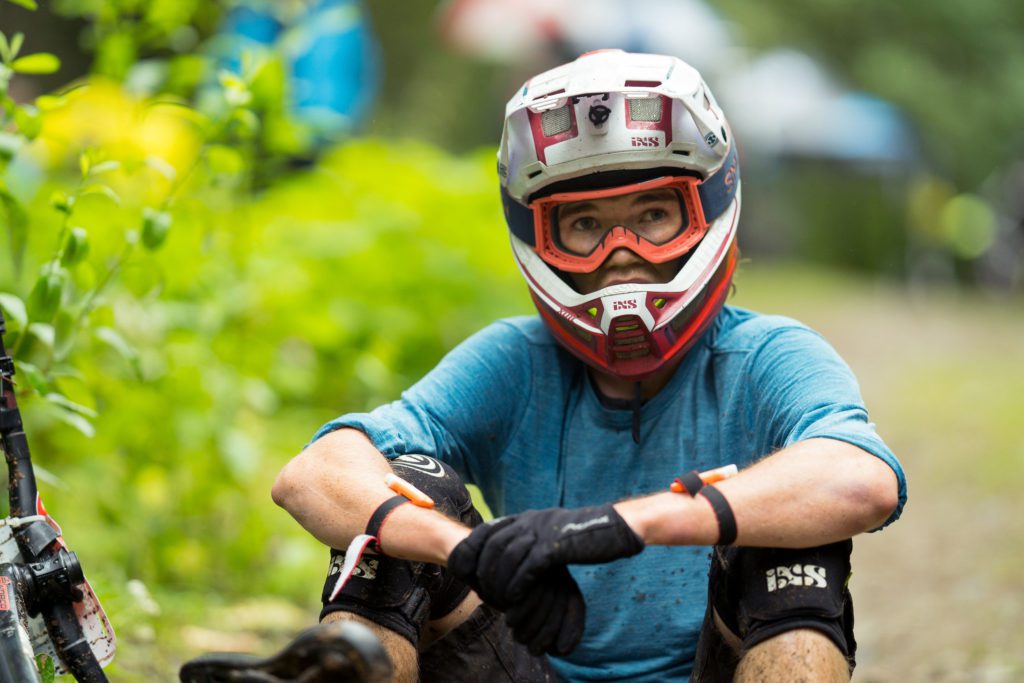 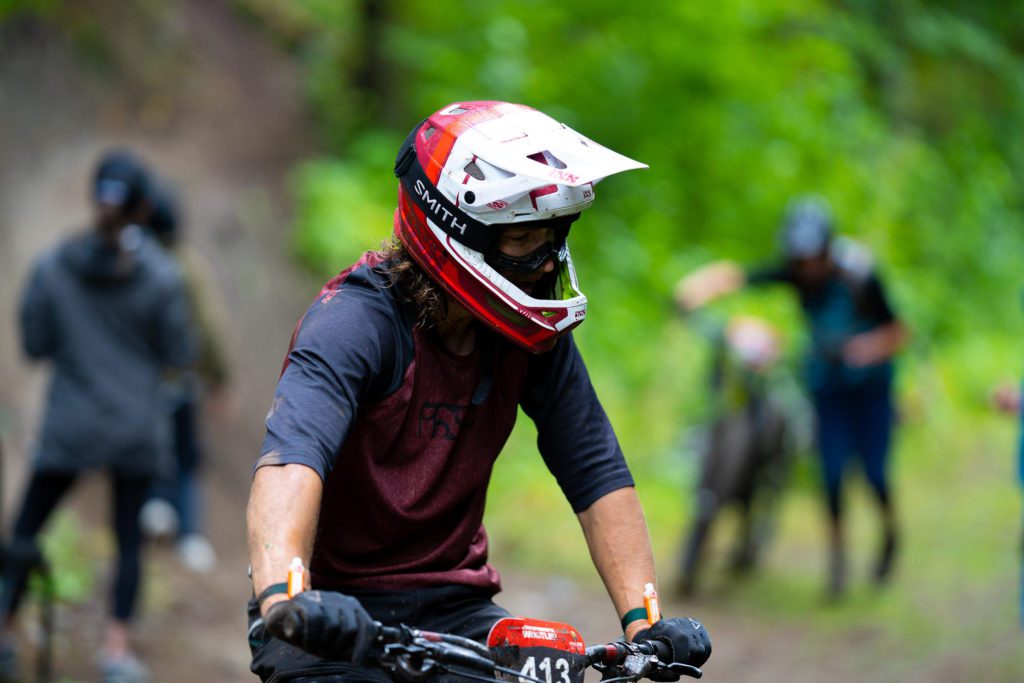 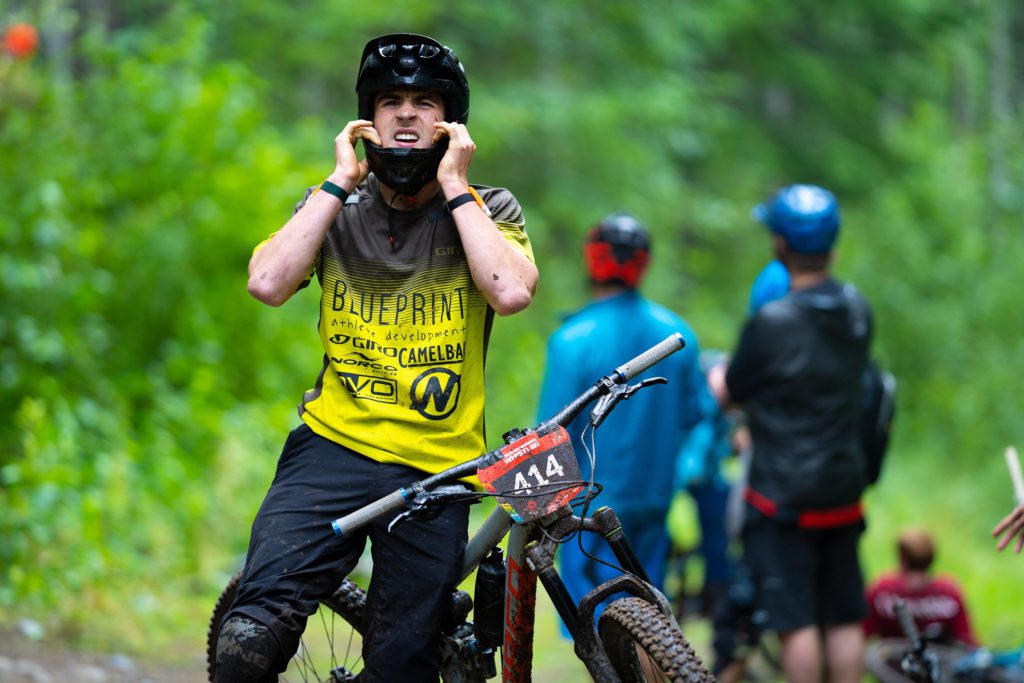 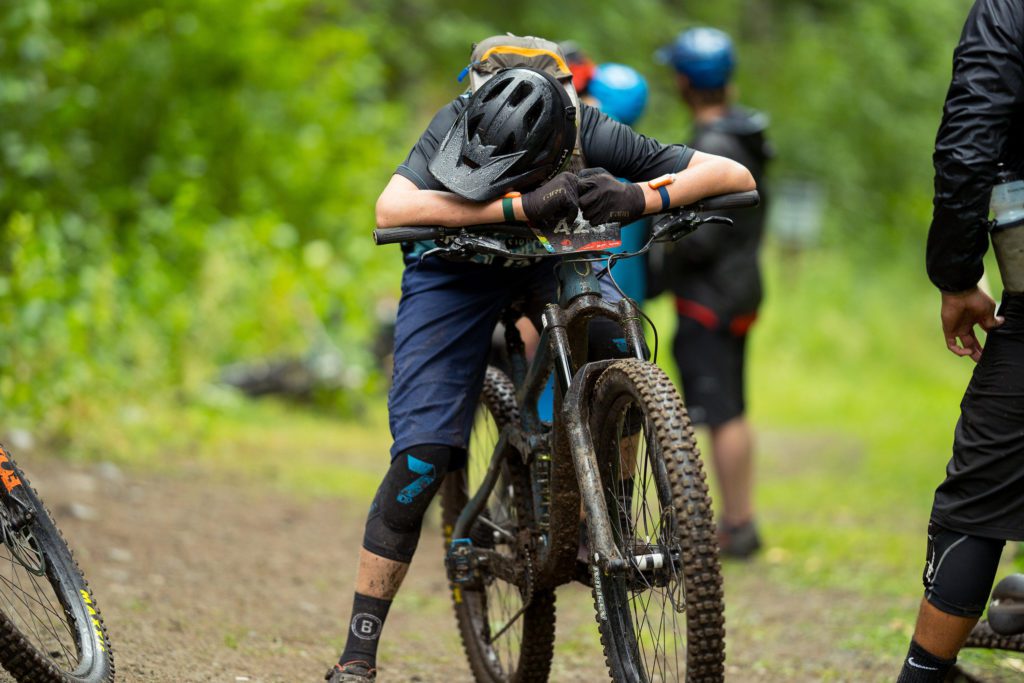 Jack Menzies takes a break on course. Stage 5 was near the end of the day, and had a punishing uphill drag race. Photo: Max McCulloch 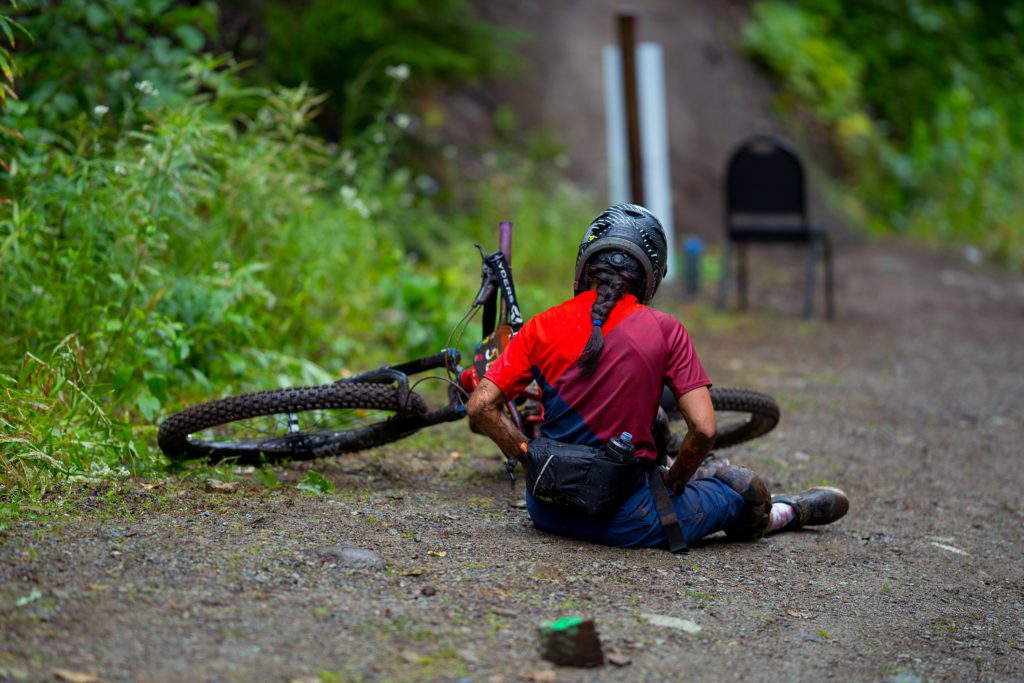 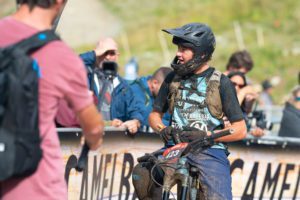 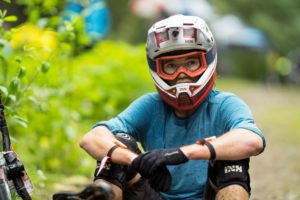 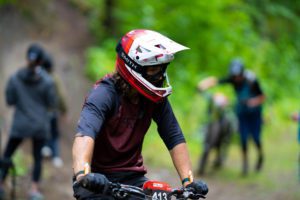 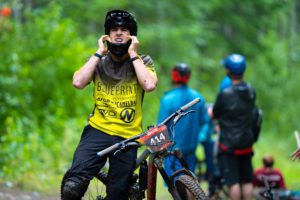 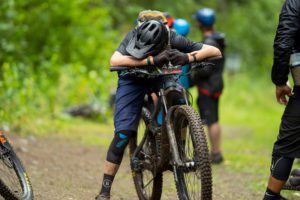 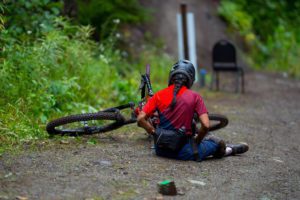 Whistler’s own Jack Menzies won the under-21 mens’ race ahead of John Richardson. Evan Wall made for two Canuck’s on stage, finishing third.

Milton McConville was seventh, Jacob Tooke 10th, and Nathan Sterckx 12th, making for five Canadians in the top-15 in the U21 men. 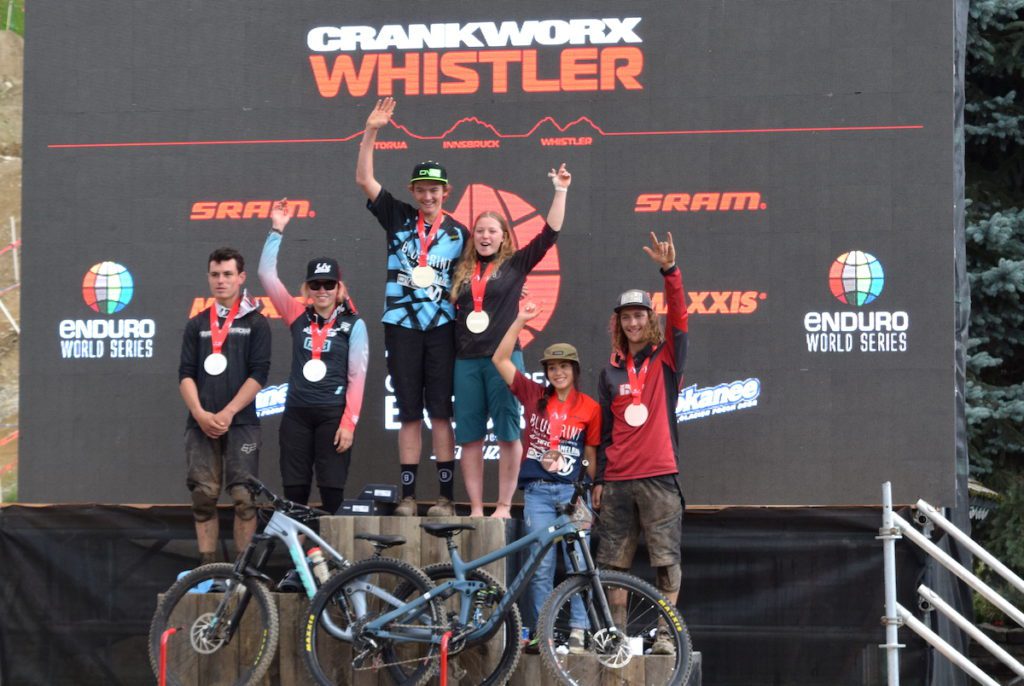 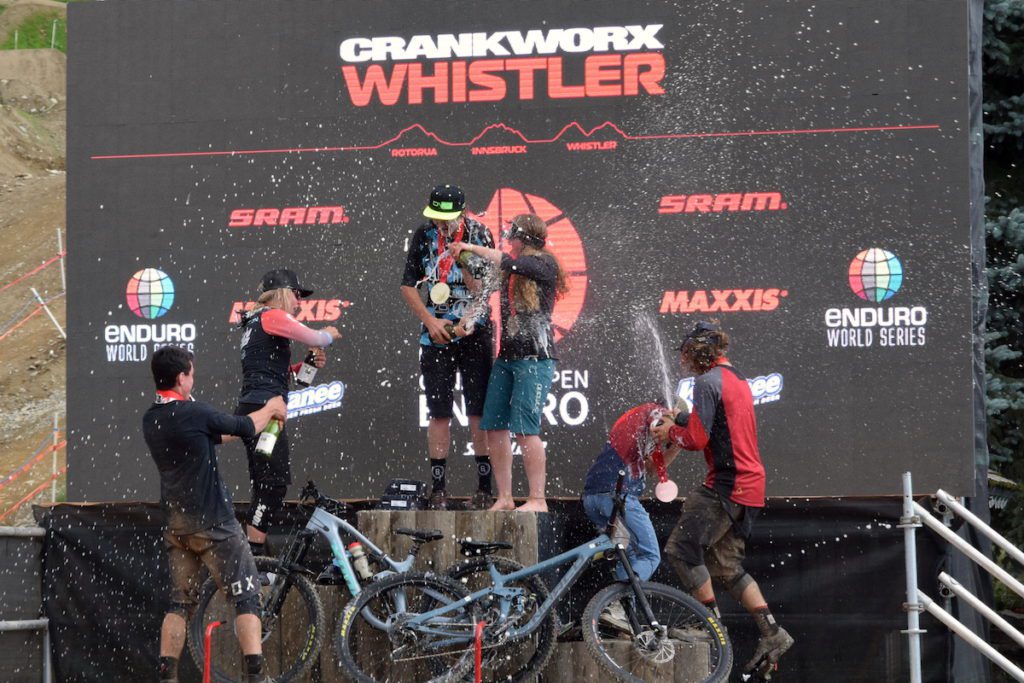 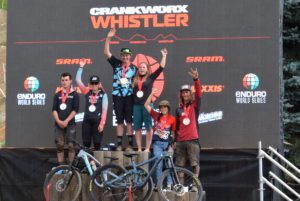 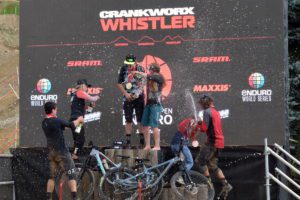