This weekend is the opening round of Canada Cup cross country racing and for the third year in a row Bear Mountain in Victoria, B.C. will host the first race of the season. The race has moved to a slightly later date on the calendar for 2018, so it’s not likely that racers will face a repeat of last years unexpected snow before racing starts Saturday morning.

Canadian MTB will be on hand all weekend covering racing, which includes the new short track XC format and an Island Cup enduro event on Sunday. Follow on Canadian MTB on Facebook, Instagram , and Twitter for updates.

Riders from across the country have arrived to mostly sunny skies and perfect early season trail conditions for what should be an exciting weekend of racing. The best of Canada’s XC elite are returning to Victoria from South Africa, after an unusually early start to World Cup racing at the the thrilling Stellenbosch event, so the pace will be a bit hotter than your usual early-season racing.

Olympic bronze medalist and 2x world champion Catharine Pendrel (Cliff Pro Team) started the season strong with a seventh place in Stellenbosch, after being in podium position for most of the race. Emily Batty (Trek Factory Racing) and Haley Smith (Norco Factory Racing) both had solid races in South Africa, and will be looking for an early season spike in fitness as the pair heads south again next week to represent Canada at the Commonwealth Games on Australia’s Gold Coast. The expected showdown for podium spots will be between those three, but with UCI points on hand, Americans could be making the tri

p north for this race. As ever, with the first race of the year and plenty of young racers getting faster every year, anything can happen.

2016 Rio Olympian Léandre Bouchard (KMC-Ekoi-SR Suntour) will be joining Batty and Smith in Australia, and was the top Canadian in the men’s race in Stellbosch, so look for him to be on the front on Saturday. Norco Factory Racing’s Disera brothers should be in hot pursuit – U23 and elite categories race together at Canada Cup events – as well as Forward Racing-Norco’s pair, Andrew L’Esperance and Sean Fincham, who is the current U23 Canadian national champion. Pivot OTE will be sending a solid crew that were also in the U23 race in South Africa, so they’ll have plenty of early season form to go along with their mad roller skills.

For the first time in the Victoria event’s history, Raphaël Gagné (Silverback OMX) won’t win the men’s elite race. Gangé will barely be back on Canadian soil after completing the ABSA Cape Epic stage race in South Africa when the start gun goes on Bear Mountain Saturday morning. 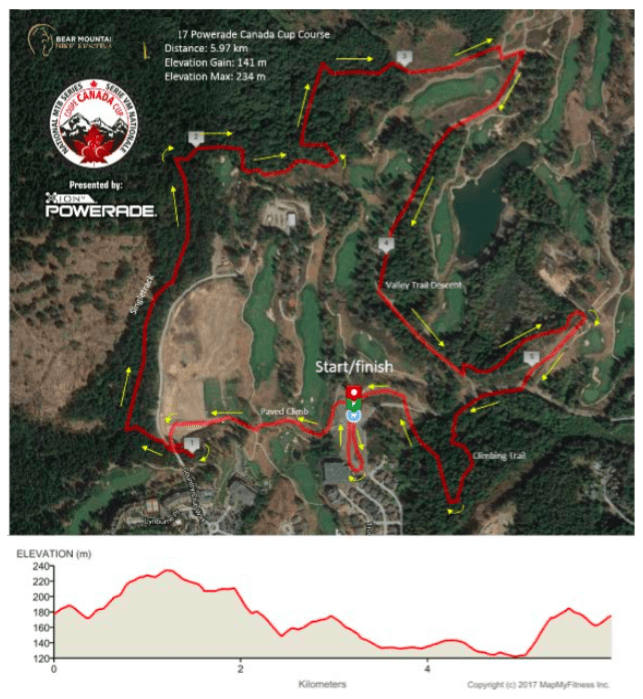 Saturday’s XCO course winds it’s way through the woods surrounding one of the resorts golf courses. Don’t let the more placid pastime on the neighboring greens fool you, though, as the course combines high speed with the technical XC singletrack Victoria is known for. Small improvements over last years course have been made that will let riders carry more speed through the top singletrack sections, but there’s enough roots and sharp rocks hiding around corners to sap racers momentum, or cause flat tires should they stray off line.

After a short start loop, the course immediately climbs straight up a steep, narrow golf cart track that averages 11%, but pitches up towards 20% at times. This section will be enough to spread racers before a long, downward rolling section of technical singletrack on the first lap, and more leg crushing every time around the course. After two kilometres in the woods, trending down with a couple short steep climbs thrown in, racers pop out onto a gravel service road for the courses only section of rest. The gravel starts down, but slowly turns into a rising false flat before kicking up, and dropping racers into the next short and fast section of trail. A quick road sends riders back into the woods for another short, technical switchbacking climb and a final short, fast paced section before spitting them out into the loose blast rock piles left over from local construction. Then it’s a slow rise back to the start finish area before riders do it all again.

For those of you that want to get into the details of the course, our web editor in Victoria was sent out for a lap, and tried his best to get close to race pace. (For his dignity, heart rates have not been included on the Strava file below) If the sun stays out through Saturday, expect lap times on race day to be solidly under 20 min for the top riders, every lap, all race.

There will be three Canada Cup category starts on Saturday. New for 2018, the U17 men and women start the day off at 10:30AM and 10:38 AM, respectively. Elite women go next at 12:30PM, with the Junior women following two minutes behind. The last event of the day is Elite men at 2:30PM, with Junior men again starting 2 minutes behind.

Sunday’s short track XC gives racers a chance to try out the new format that has been added to the World Cup schedule for 2018. Elite, U23 and Juniors will race together on a shorter, fast paced and spectator friendly loop. Race time should be closer to 20 minutes, with lap primes added to keep the pace high for the duration of the race.