The Canadian Open Downhill may fall on the final day of Crankworx Whistler, but the classic track never fails to deliver exciting racing.

This year, the elite women’s podium all finished within a single second. Race winner Tracey Hannah (Polygon UR) was separated from third place finisher Myriam Nicole (Commencal Vallnord) by only 0.630 seconds.

Just as exciting as the tight racing, however was who was sitting in second between the two top World Cup riders. Valentina Höll (SRAM-TLD Racing), is still eligible to race in juniors. In Whistler, she went head-to-head with the current elite women’s World Cup leader, Tracey Hannah and an international field of downhill’s best.

The young Austrian junior sat in the hot seat with the fastest time for much of the race. With only one rider remaining on the start list, it looked like Höll could take the elite women’s win.

That last rider, though, was Hannah. The Australian already had win’s at the prior two Crankworx World Tour stops, and had no plans on slowing down. Hannah crossed the line fastest, 0.60 seconds ahead of Höll.

“That’s my first time, so that’s pretty cool,” Hannah said of the Crankworx three-peat over the season. “I had a bit of pressure on myself, but I’m super stoked. It was sick. That was such tight racing.”

Nicole, in her first race back since a foot injury derailed her season, claimed third. Revelstoke, B.C.’s Casey Brown finished fourth, with the newly crowned Queen of Crankworx Vaea Verbeeck in fifth.

With her win, Hannah secures the Crankworx Downhill Champion title for 2019, which she has now held continuously since 2015.

“It’s a goal. It’s great to take that,” Hannah said of defending her title. “On top of leading the World Cup it’s sick to come away with the Crankworx one as well.” 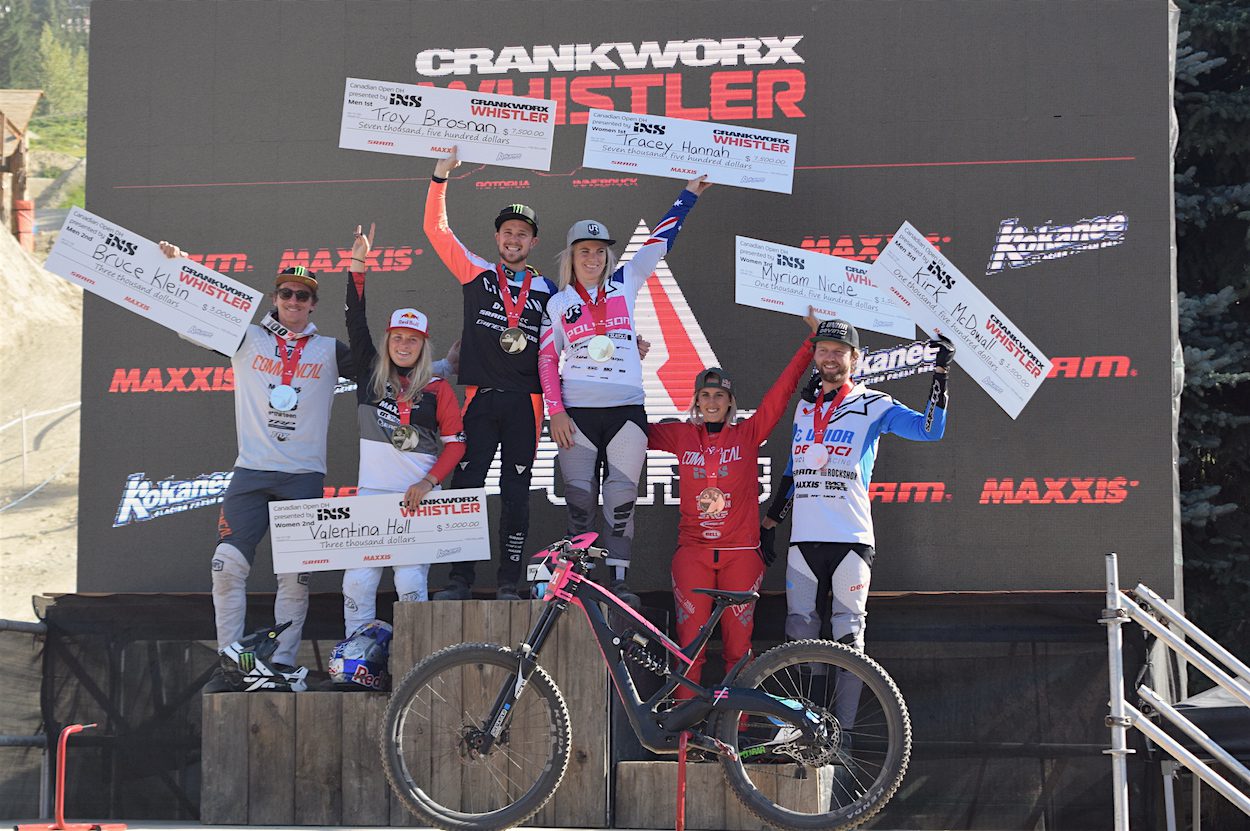 Elite Men – Brosnan back on top

Troy Brosnan (Canyon Factory Racing) is one of the most consistent downhill racers on the World Cup circuit. Nowhere is that more evident than in Whistler. The Australian recorded his fifth-straight Canadian Open DH win at Crankworx on Sunday.

“It’s pretty insane. Going four in a row, even three in a row two years ago…the five was there, so I thought I’d give it a good crack,” Brosnan said of his impressive streak. “I took a lot of rest this Crankworx…just trying to feel fresh for this race. And yeah, it paid off. I love this track and I love Whistler…it’s an awesome thing to race with everyone, especially with everyone in the trees,” he said of the crowd. “They’re going crazy.”

Brosnan was the last rider to drop in. When he left the start hut, Bruce Klein (Commencal / 100%) was still in the hot seat, surrounded by two Canadians. Kirk McDowall (Unior / Devinci Factory Racing) would be bumped down to third in the final standings.

Brook MacDonald finished eighth on Sunday but, added to two Crankworx downhill wins already this year, it was enough to earn him the Crankworx Downhill Champion title for 2019 alongside Hannah. 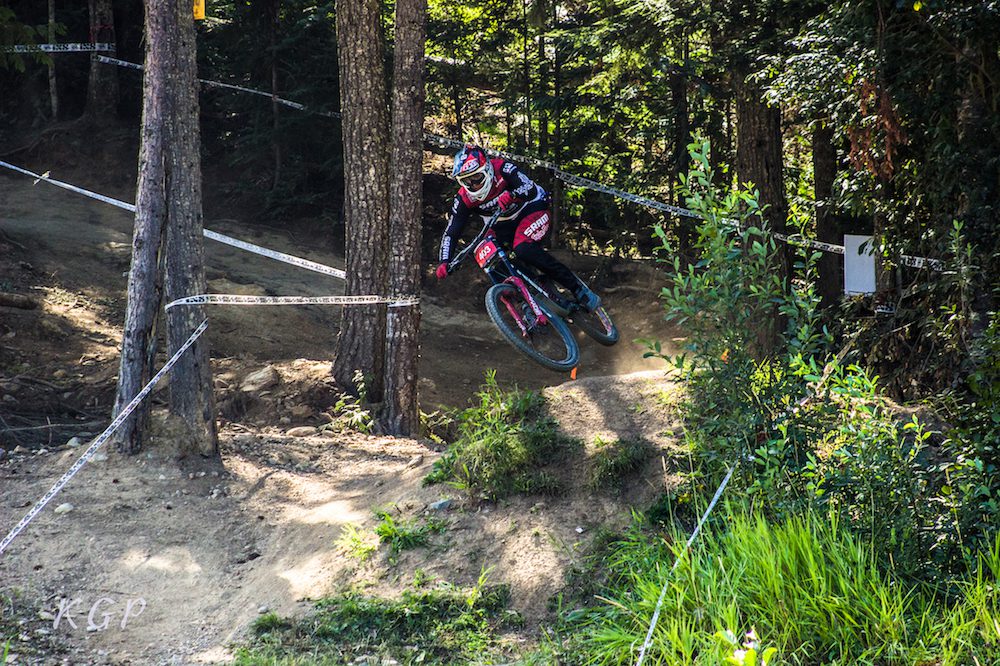 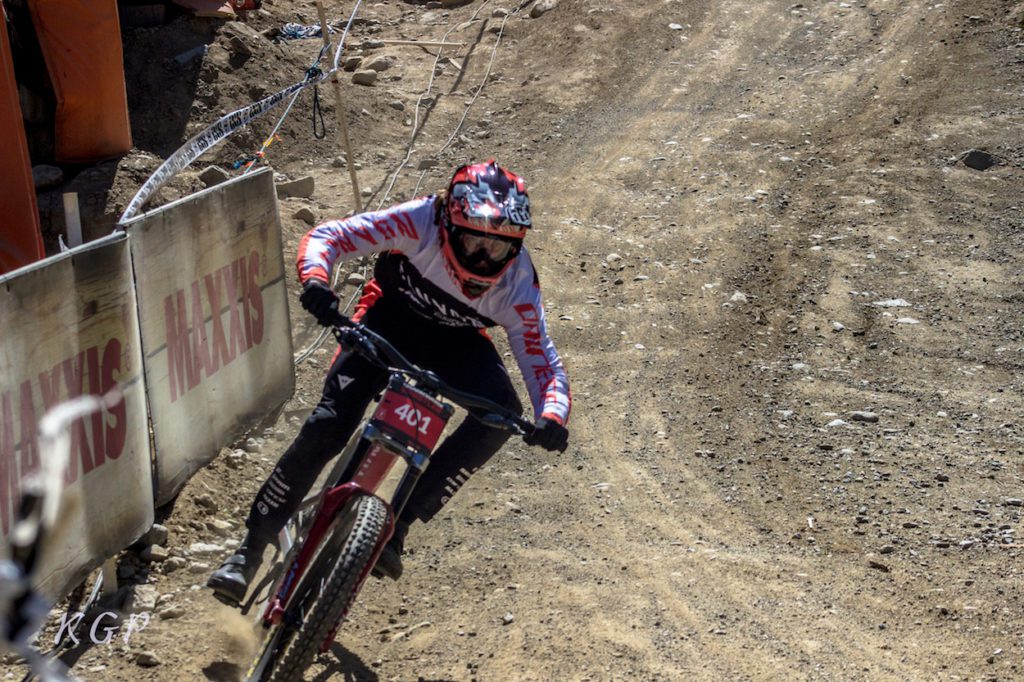 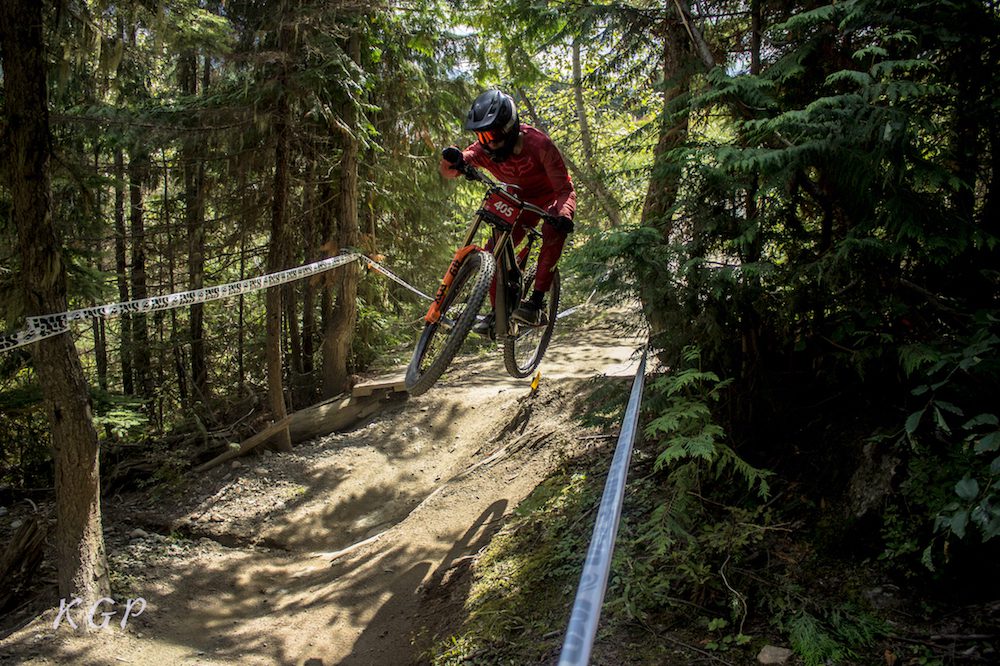 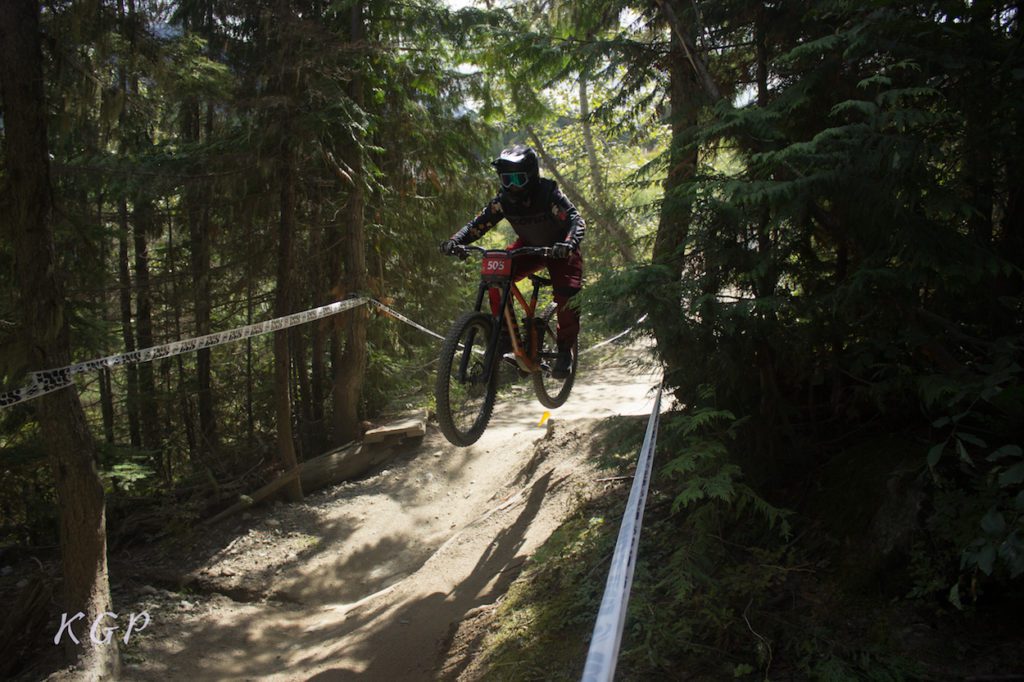 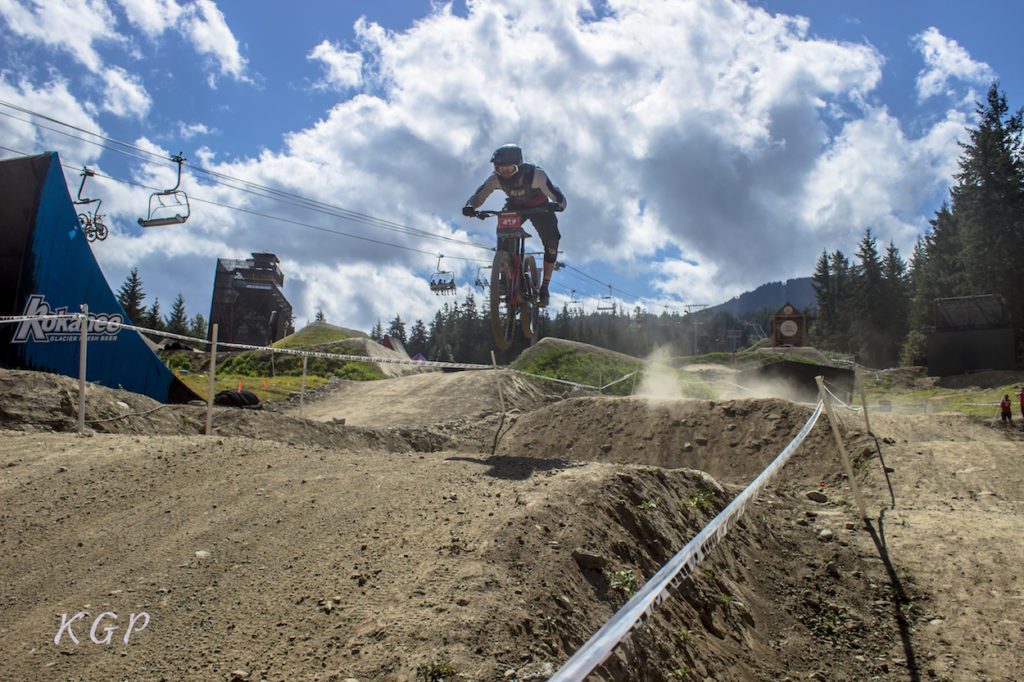 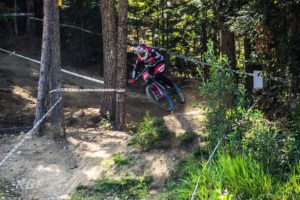 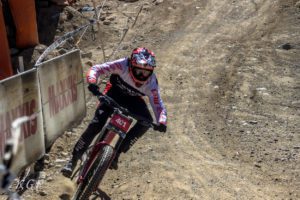 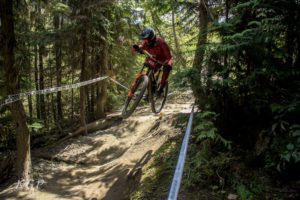 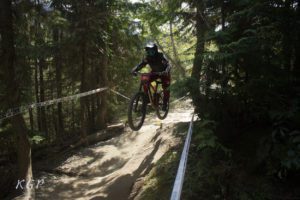 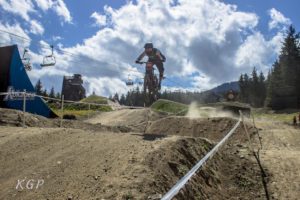 In the junior races, Pemberton, B.C.’s Lucas Cruz (SRAM TLD) came out on top of an international field of junior men. Behind him, Kye A’Hern earned another podium finish for Canyon Factory Racing on Sunday, while Australia’s Luke Meier-Smith finished third. Squamish’s Seth Sherlock was just off the podium near home in fourth. 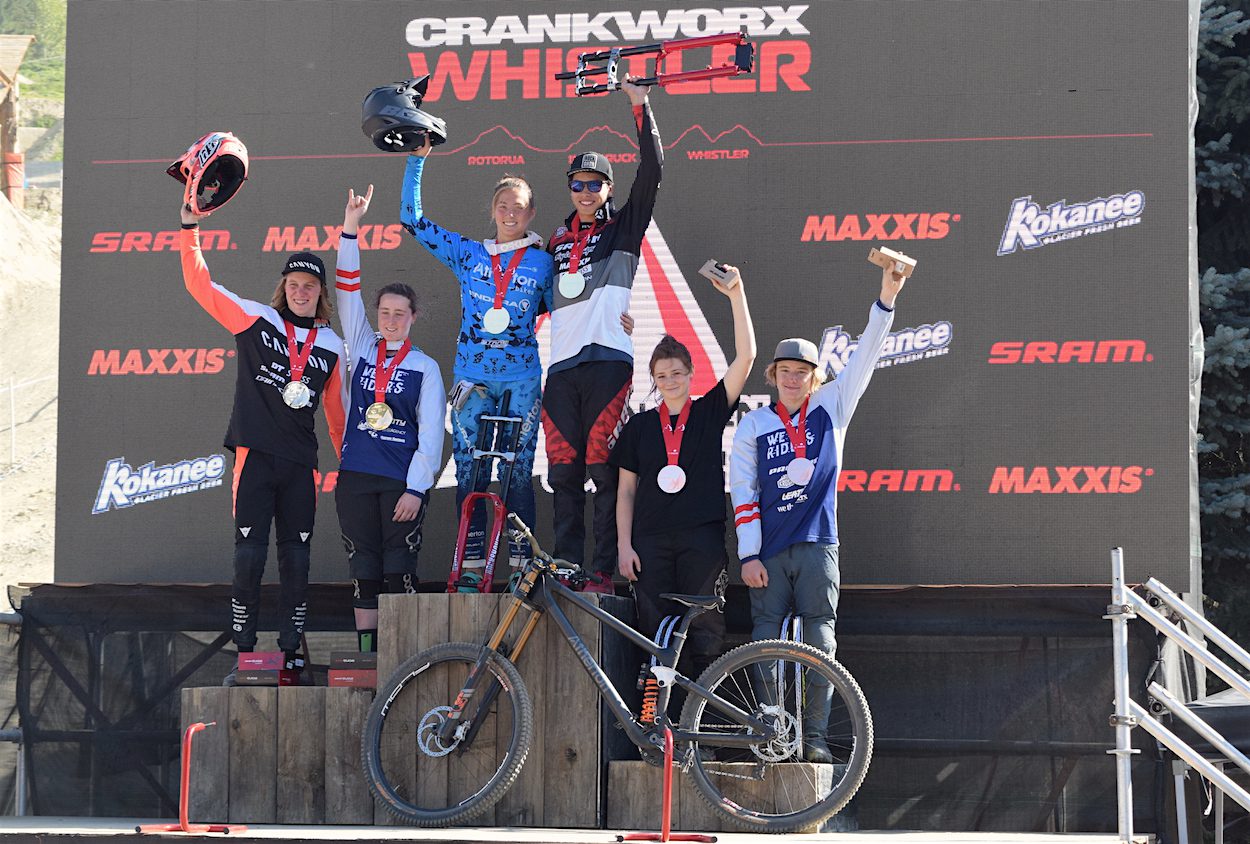