Canyon rolled out a raft of new Spectral models today, expanding the trail bike line to include almost all imaginable options. While the addition of 27.5″ wheels as a choice alongside 29″ and new aluminum frames may have been the focus of the release, one bike, the CF8 CLLCTV edition stood out.

The CF8 CLLCTV is the German brand’s first dedicated “mullet,” or mixed 27.5″/29″ wheel version of the Spectral. The promise of mixing wheels is the speed of a 29-er with the agility, or fun-factor, of 27.5″ bikes. When the redesigned Spectral first launched as a 29″ carbon fibre only model earlier in 2021, it was a very dialed, very playful bike. Does adding the little wheel take the Spectral to the next level? Or will it upset the balance of what is already a fun bike to ride?

Mixed wheel bikes are steadily gaining momentum. What started out in the world of downhill racing quickly proved to have benefits for enduro racers and, well, anyone that likes to ride their bike just for fun. The promise is to get the benefits of both wheel sizes in one bike. The speed and rollover momentum of 29″ wheels up front – or the “business” end of the classic hairdo – plus the agility and cornering prowess of 27.5″ wheels – i.e. the party. As a bonus, it also offers more clearance to avoid buzzing the rear tire when you’re hanging out over the back wheel.

I’ve tried mixed-wheel bikes before, with DIY mullet set-ups and eMTBs, and they come close to delivering on the best-of-both-worlds promise. The Spectral CF8 is the first proper, purposed designed mixed-wheel bike I’ve had the chance to ride. As you might expect, a bike designed specifically for mixed wheels out-performs my DIY attempt. That garage project had a few drawbacks. The first few rides on the Spectral has already done away with most of those.

Canyon designed the two carbon fibre Spectral frames together. One sneaky bonus of that process is that the frames are effectively modular. The CF8 uses a 29″ front triangle and 27.5″ rear triangle and the same linkages for both bikes, while still hitting all the geometry numbers that worked so well for the 29″ version. The downside is that if you choose to go mullet, your committed to the look. There’s no flip chip to run a 29″ rear wheel (or 27.5″ front wheel) and Canyon doesn’t have plans to sell the rear triangles separately. Less convenience for the non-committal types, but you get the benefit of a frame that designed to be one thing, not potentially making compromises trying to squeeze two wheel sizes into one frame.

Canyon gives the “fun” version of its trail bike a slightly burlier parts kit than the other Spectral models. There aren’t too many changes, the Spectral is already a very capable bike, but they’re important ones. The standard air shock is replaced with a Fox DHX Performance Elite coil shock, with travel remaining stable at 150-mm. Up front, a Fox 36 Performance Elite fork keeps the CF8 at 160-mm, in line with the rest of its siblings. Instead of twin Minions, Canyon opts for the popular Maxxis Assegai 2.5″ WT / Minion DHR 2.4″ WT tire combo. Oddly, though, they’re still both EXO tires instead of either of Maxxis’ tougher casings. 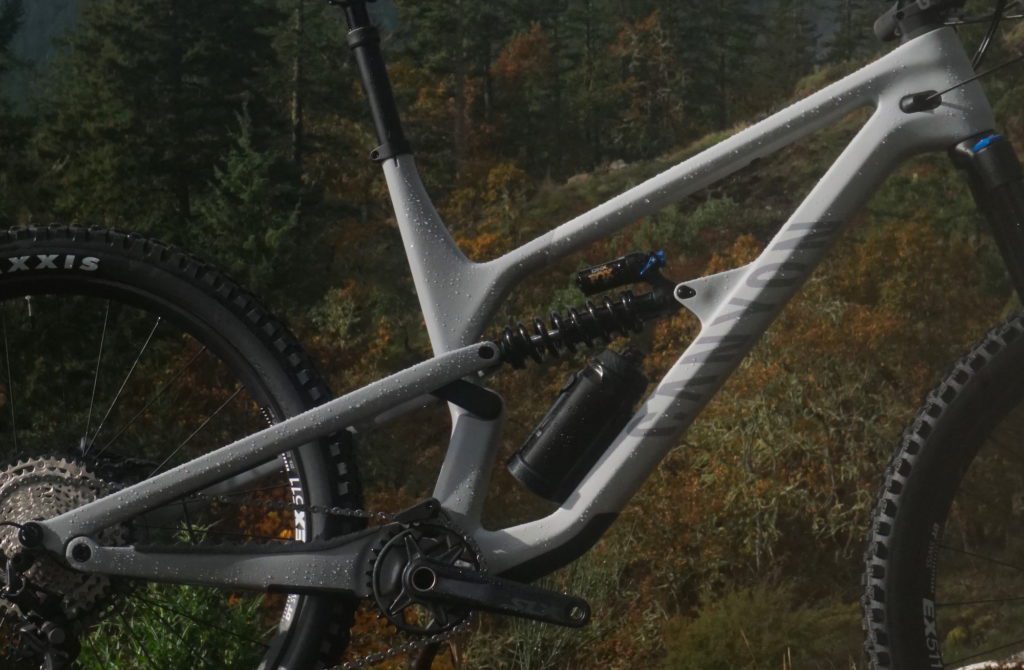 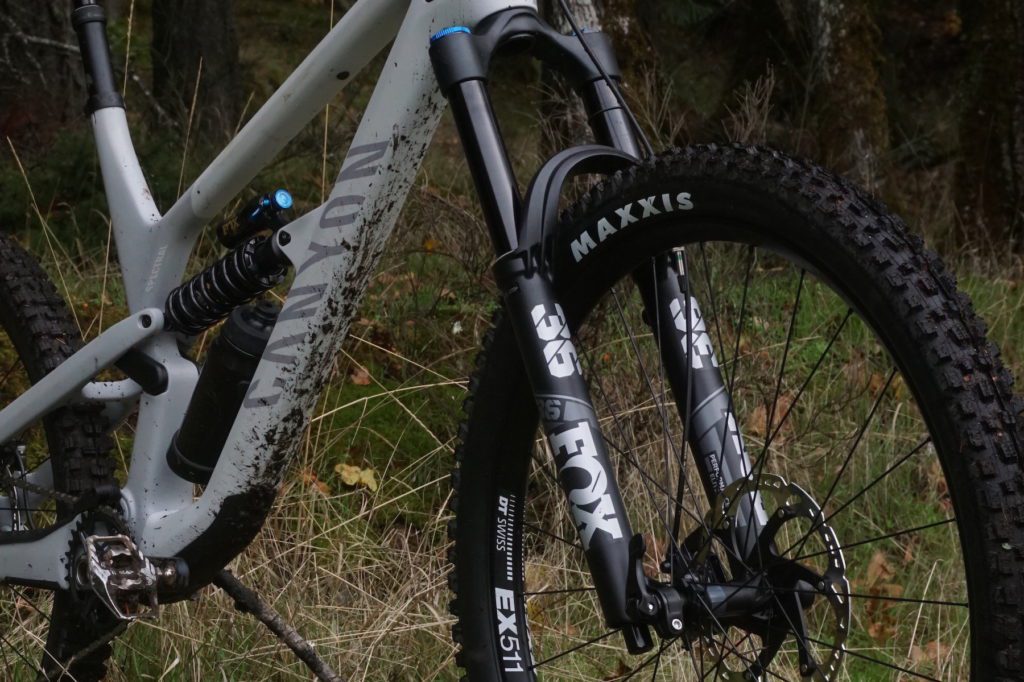 Fox 36 is reliable up front. 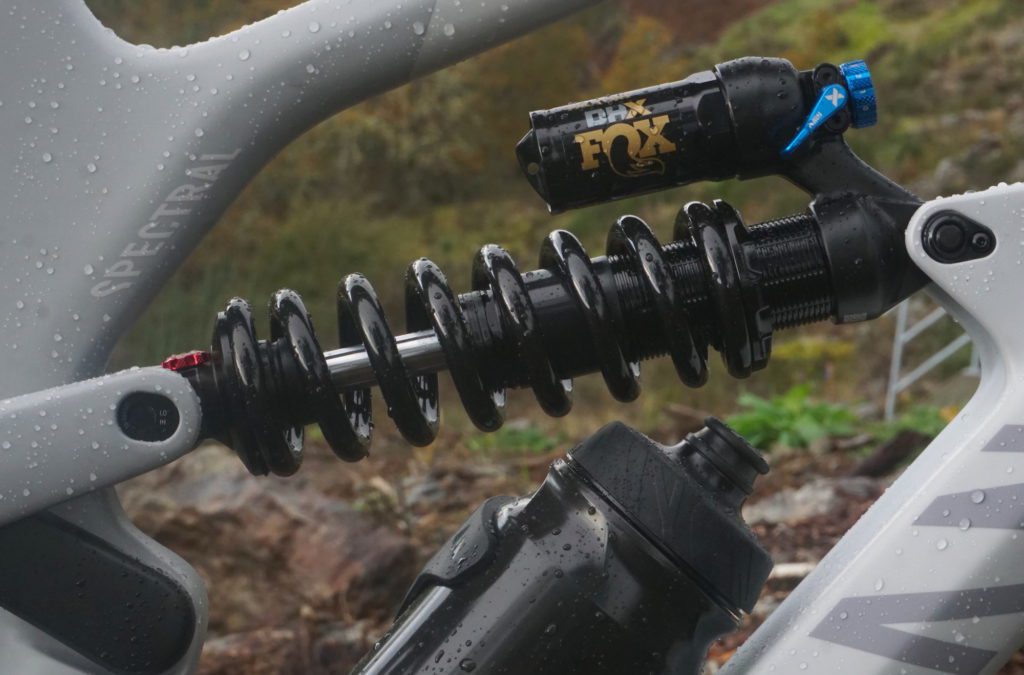 On coil: Fox DHX Performance Elite out back 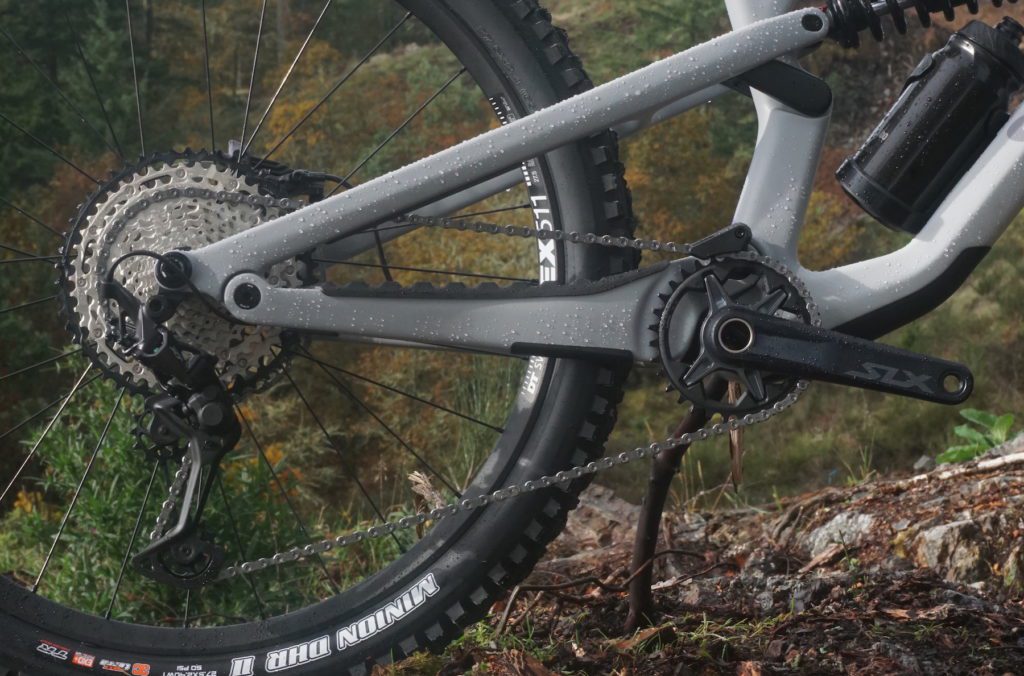 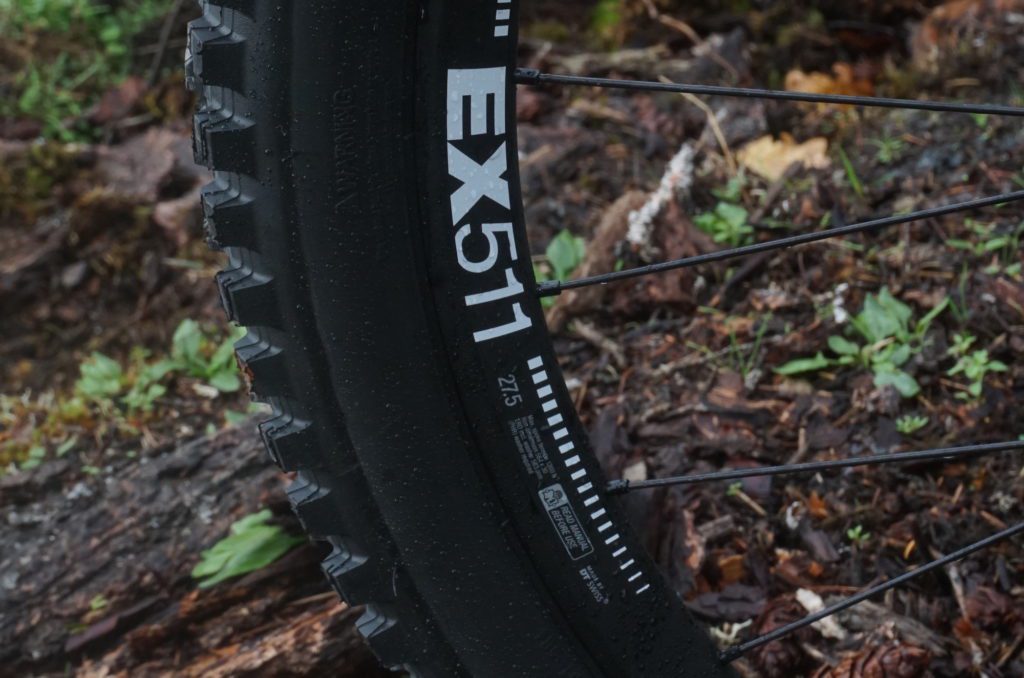 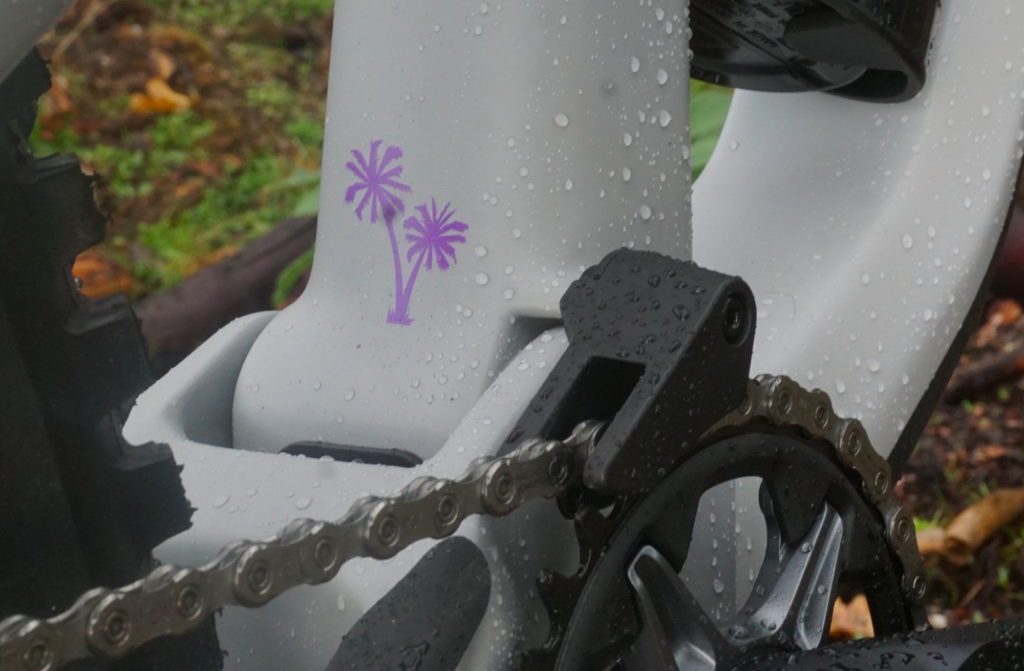 Canyon's integrated chainguide, and a little reminder to enjoy the ride. 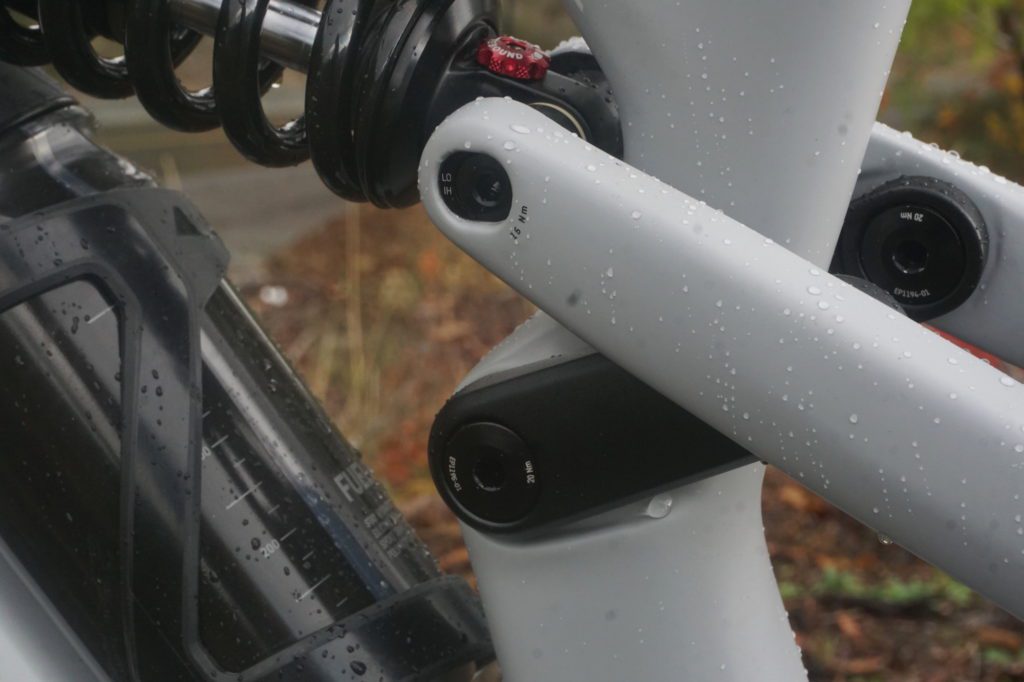 A flip chip lets you adjust the geometry to be 0.5-degrees steeper in the head tube and seat tube, and 8mm higher at the BB. 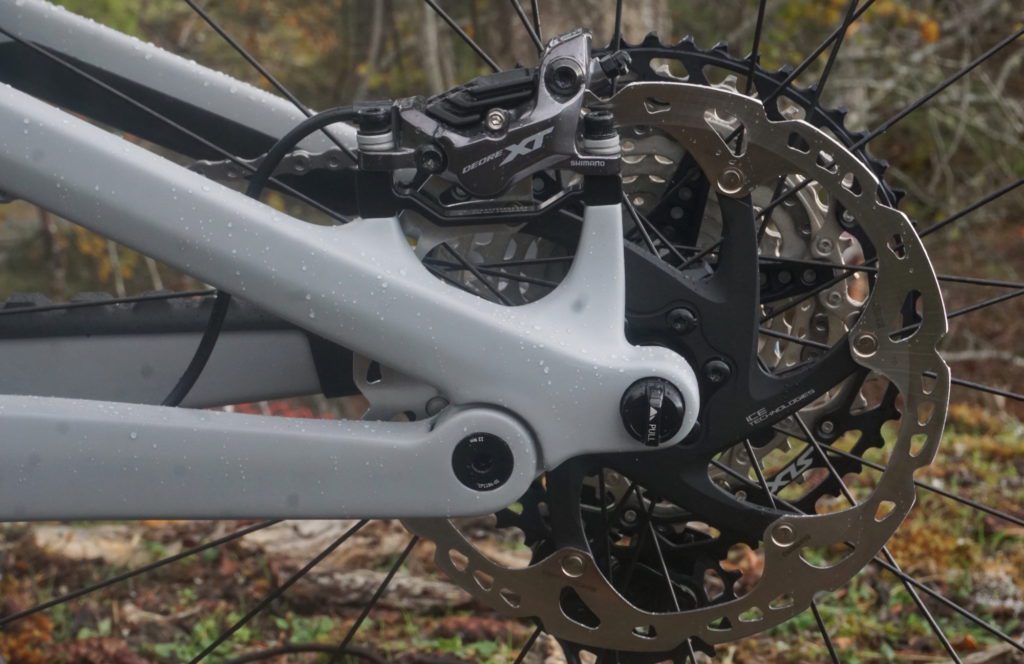 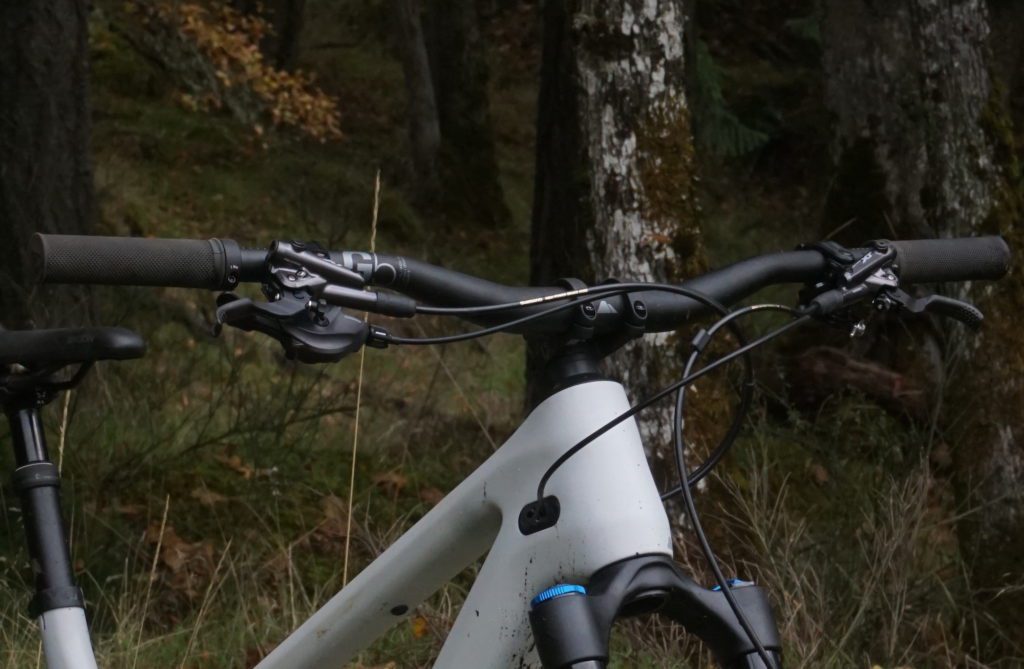 Canyon's own G5 bar and stem 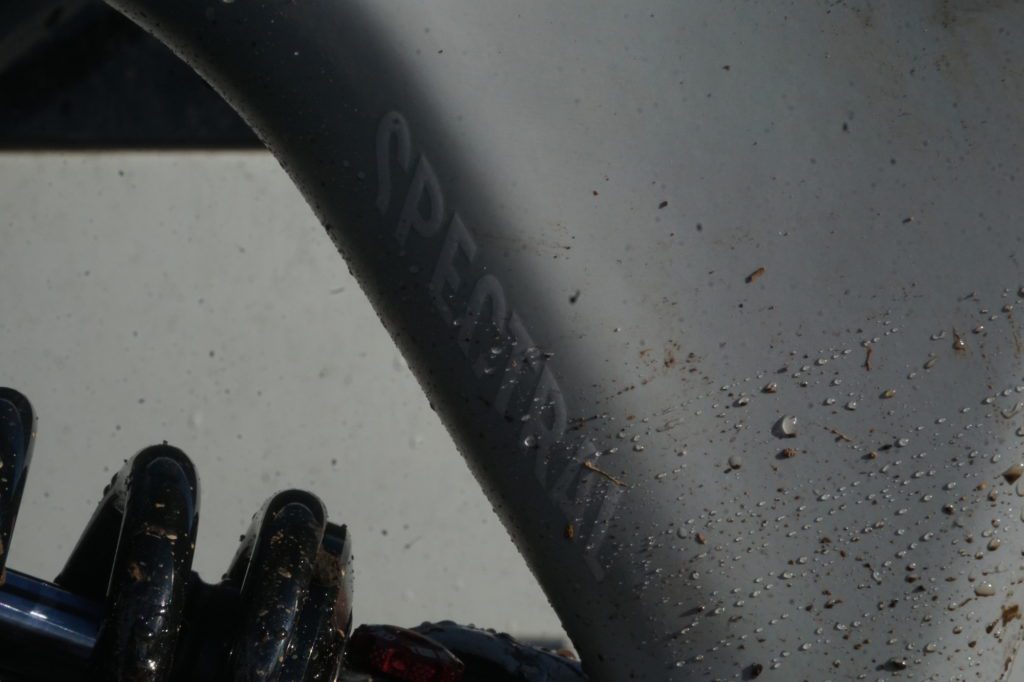 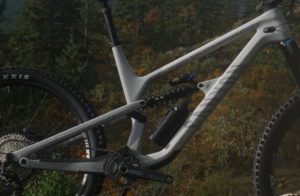 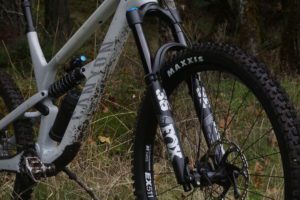 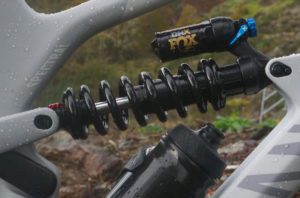 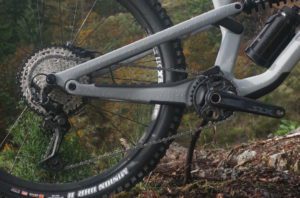 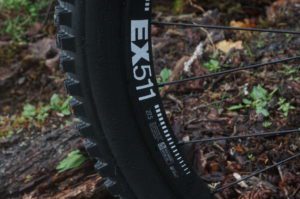 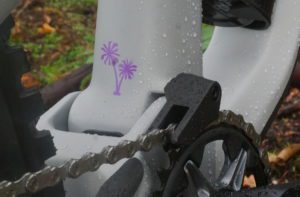 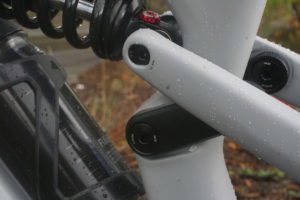 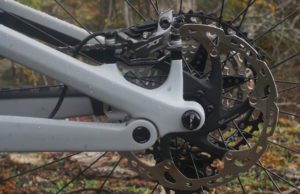 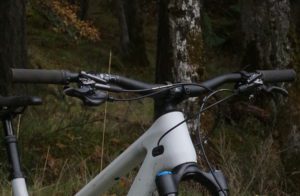 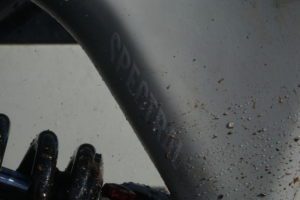 The rest of the build is a very solid mix of function and durability. Shimano takes care of the drivetrain and brakes. XT trail four piston brakes and big 203mm rotors make sure you’re in control no matter how wild you get. A mix of XT rear derailleur and SLX crankset and cassette handles shifting. DT Swiss adds 30-mm wide EX511 rims laced to 370 hubs. Canyon rounds out the build with its own G5 dropper post (150mm on S, M, 170mm on the Large, and 200mm on the XL), adjustable in 25-mm increments, and aluminum G5 stem (40mm) and bar (760mm size Small, 780mm for M-XL). With the added coil and Assegai, the CF8 CLLCTV is almost 2.2lbs. heavier than the 29″ CF8. 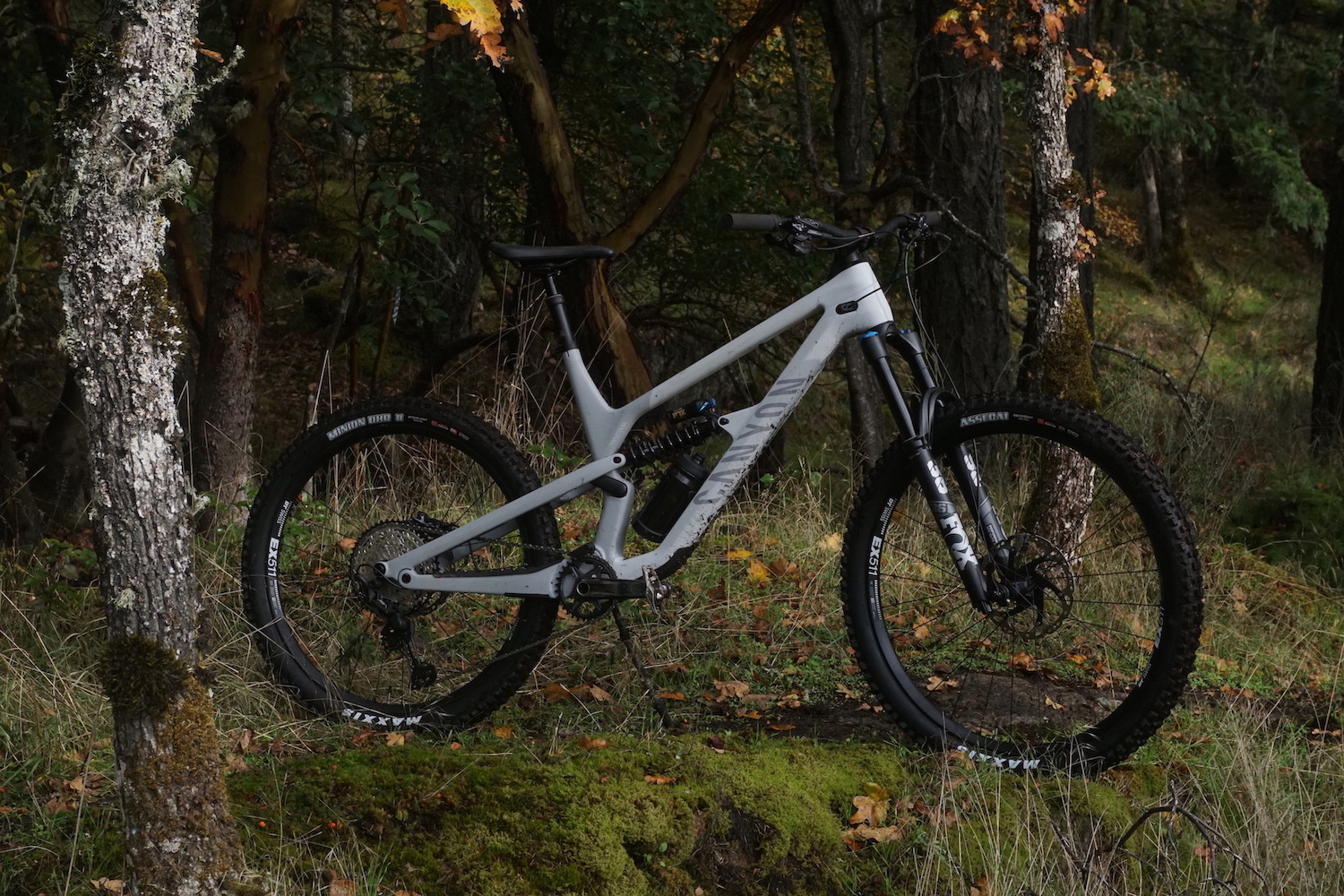 The 29″ version of the Spectral was incredibly well balanced, especially for a longer travel 150mm/160mm trail bike. It climbed efficiently and was a riot to descend. Canyon says that bike targets a 60:40 ratio of descending to climbing. The mullet version surely tips that emphasis slightly more towards descending but, as a trail bike, it still has to be capable as an all-rounder. So, how does the mullet concept play out on the trail?

After several rides, the first impression are that the mixed wheels add to the fun-factor of the Spectral, with only a few slight drawbacks. When climbing, when you’re weight tends to be on the seat and further back on the bike, the little wheel out back does get hung up on more things as you’d expect from a 27.5″ bike. But it also helps the relatively long bike get around tight switchbacks more smoothly. And, naturally, the coil is not as efficient as an air shock, but it does add traction and there is a “firm” switch for longer pedals up smoother surfaces.

Point the Spectral down and those minor drawbacks fade away almost as fast as the Spectral picks up speed. As you shift your weight forward, into the center of the bike, the two different wheels start working together. The bike has the stability and most of the rollover of a 29-er but, when you go to dive into berms or tight corners, most of the agility and excitement of a 27.5.” It doesn’t feel quite the same but finding the new balance is easy and it gets through tight corners with far more energy than a dual 29.”

In fact, the mixed wheels seem to have a few unique ride qualities, distinct from both the pure fun of 27.5 and the stability of the 29-ers, especially when paired with the Spectral’s stiff and light frame. Perhaps because the big front wheel lets you ride with your weight forward, its easier, and fun, to let the back wheel break free, then snap around through corners. I haven’t had the chance to see how this plays out when the speeds pick up (it’s been a very wet fall so far) or if the 27.5″ back end can get the same straight line speed as its 29″ twin. But early signs are promising that the mullet version of the Spectral CF8 is going to deliver on it’s party promise.