Catharine Pendrel has been busy making the most of her time at home during COVID. While the Canadian Olympic Bronze medallist and two-time cross country world champion would normally be travelling the globe competing in World Cup’s this time of year, COVID changed all those plans. With the Olympics postponed a year and World Cup racing on hold, Pendrel has turned her attention to her home town trails in Kamloops, B.C..

When you need to find a silver lining you usually can. For me, the loss of racing and travel this summer meant having to reorient my purpose and goals in a big way. Rather than striving for an Olympic spot and World Cup podium performances, I had to dial my mental and training intensity back, way back and find my motivation and value outside of racing.

I was president of our local bike association, the KBRA from 2016-2018. While in this position a local kid’s coach, Chris Martin from DMB mountain bike coaching, approached me about creating a kid’s league and creating opportunities for kids to try mtb racing. Naturally, it was an easy sell. We got to work creating an annual 6-week skills and race series that has sold out the past two seasons.

One of the biggest challenges to hosting kids’ events for us in hilly Kamloops was actually having the appropriate terrain for our 70 varied ability kids, aged 7-12. Last year I approached the city of Kamloops about building some new trails near my home. Normally, building trails is a multi-month-to-year process of consulting stakeholders and getting approval. This time, the city of Kamloops actually had an area designated for beginner bike trails just waiting for the right group to develop. It was like being gifted a new bike and I was already dreaming about what we could do with it. With the help of my neighbour Martin, a kids’ league parent and volunteer trail builder, and the support of the KBRA we got right to work that fall laying out the design and putting tools in the ground.

We really wanted to host one of our Kids League events there this spring…which was maybe a bit ambitious with Olympic qualifiers and the work still needing to be done, but hey I’m an optimist.

And then, before the snow had even melted, COVID arrived. All of our daily realities and priorities were altered… races cancelled, organized kids’ sports cancelled, staying home in your community ordered, and bicycles discovered! With kids and parents in British Columbia at home from work, but still able to recreate outside alone or as a family, I have never seen so many people out riding. My street had a bike jump at the end of every driveway and kids racing back and forth all day. Biking became more than ever our release, our normalcy, our escape from stress whether riding inside or out.

Obviously, now is far from a perfect time in the world, but it became the perfect time for building trails for kids and newer riders, so that’s what I’ve been up to. My neighbour Martin and I got back to digging this spring, each tackling different sections of the 1.1 km course. More members of the KBRA and Kids League signed up to smoothen and widen various sections and local companies wanted to help too. We had bridges built, lumber donated and even a mini-excavator and operator loaned for four days.

Every day while out digging we had kids ride by chasing the painted rocks my young neighbour Aliya had painted for us for course marking and parents telling us how great it was having trails added to their neighbourhood. When the world feels so uncertain and gloomy it has been a huge dose of sunshine giving kids something new and helping them discover more terrain by bicycle. At the moment it feels like one of the best ways I can contribute to my community and it has helped my head as well by having a new goal alongside training for a still uncertain return of racing. 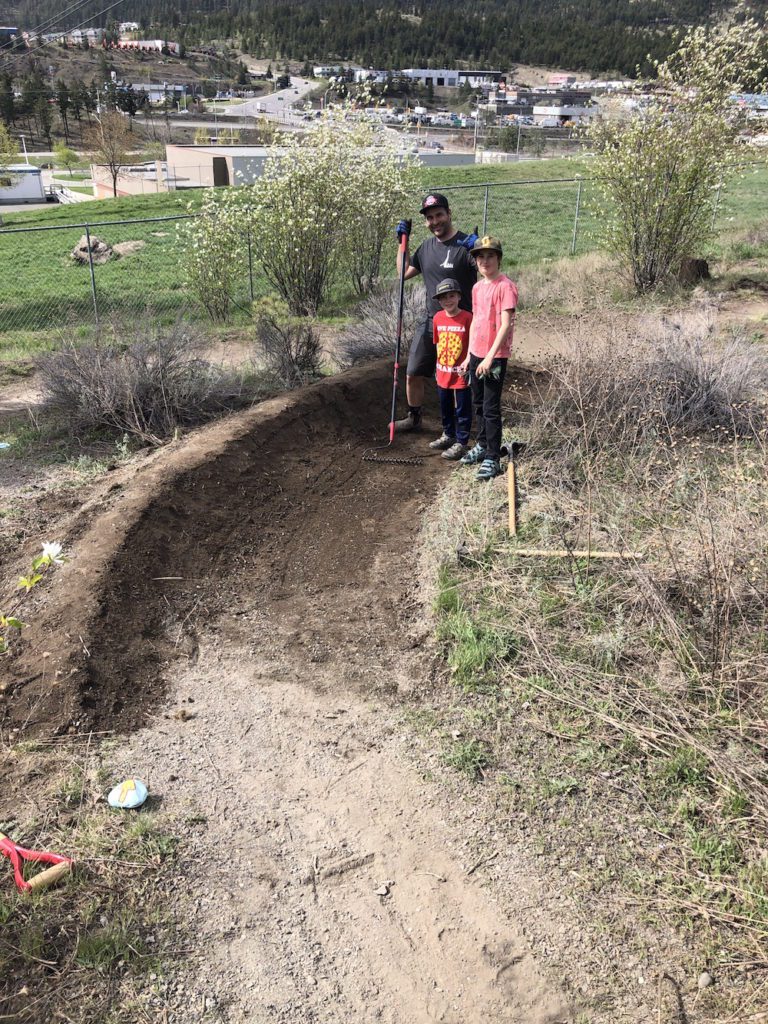 Dustin Adams, founder of We Are One composites and a former Canadian downhill national champion, and his family help out at the dig. 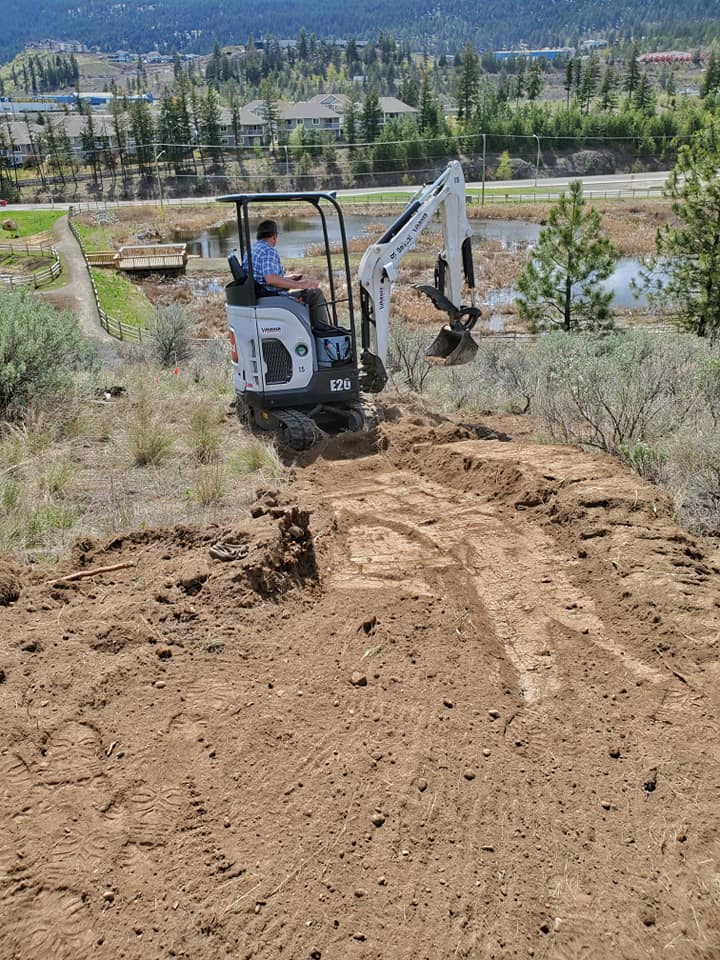 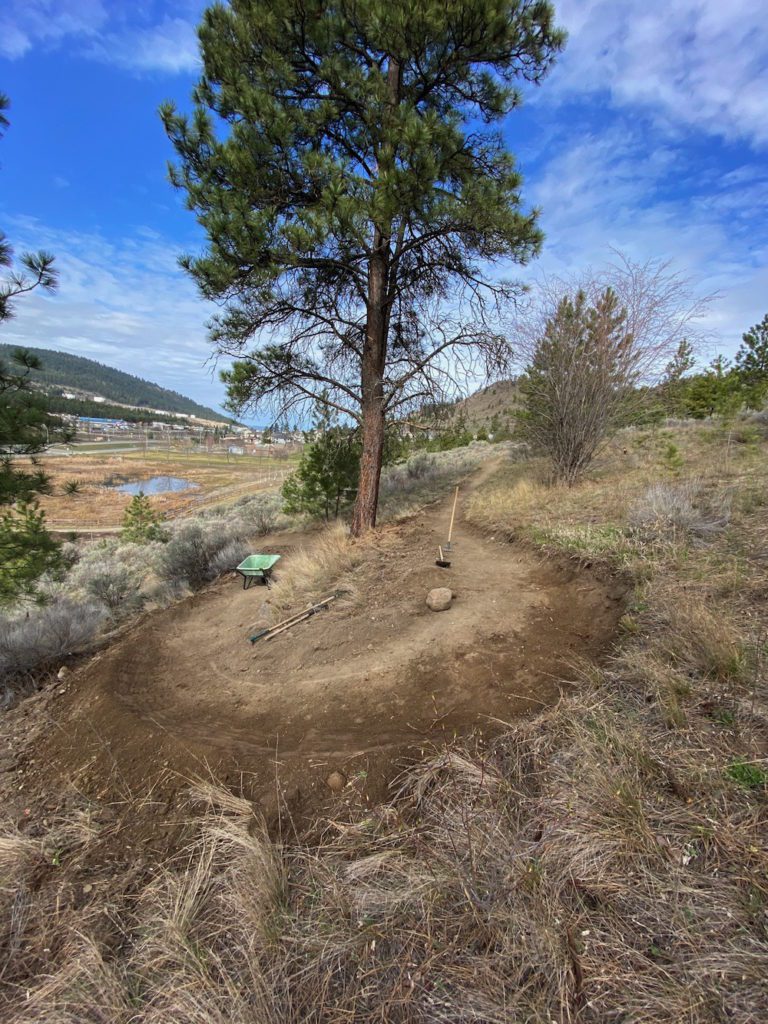 A perfect switchback in the making. 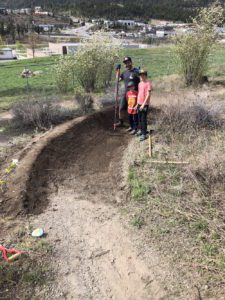 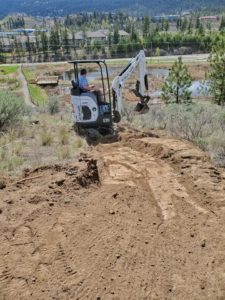 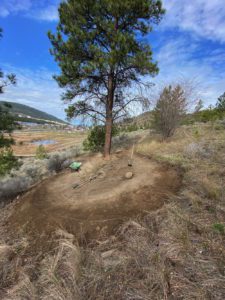 We’re still working on signage and expanding what we have, but when the world opens up and you can come for a ride in Kamloops, make sure you check out our little track at the Dufferin wetlands. If you are interested in what it takes to start a kids league in your town check out our KBRA Kids league Facebook page or send me a note on Instagram (@cpendrel) or on Facebook at Catharine Pendrel.

Take a ride down our new kids trail! It has been really amazing to have this build project while unable to race and with so many new people taking up riding at the moment it seems the perfect beginner-friendly addition to our trail network. @kbrakidsleague @clifbar @martin_bojesen #makeitgood #makeyourmark @outride

Huge Thank you to Martin Bojeson, Glen Buchanan, Kevin Scherbain at Reliable Improvements, Chad at Ogilvie Mountain Holdings, the KBRA, Kyle and Aran at Trout Creek Lumber and the City of Kamloops.

Check out more photos from the KBRA kid’s trail build on Facebook.