Any ride where you gain 1,000 metres of elevation is a big ride. Just one 1,000m day may not qualify as epic on its own, but it’s a big day. Doing rides like that back-to-back for 30 days, though? That’s huge. Especially when the vast majority of that elevation is mountain biking, with a bit of gravel thrown in.

30 days of climbing at least 1,000 metres is the challenge Chris Hatton set for himself when COVID cancelled his summer plans. The current health situation has inspired many to seek out extreme personal goals on the bike, such as Everesting. Having recently relocated to Kamloops, B.C. from Ontario, Hatton needed more than a single day of distraction. 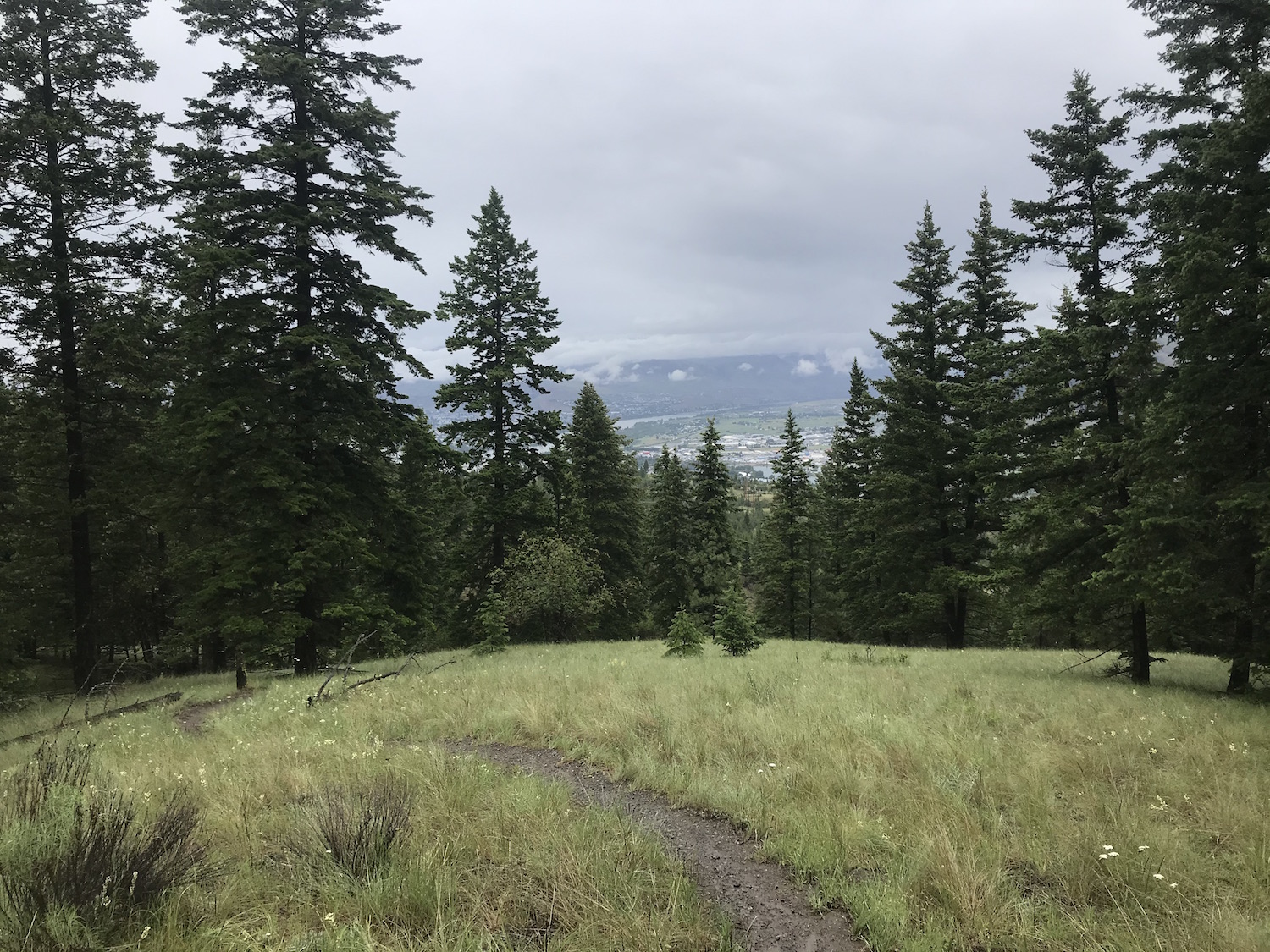 Hatton recently completed his challenge, climbing 40,185m in 30 days. For those of you quick with your math, yes, that’s a few extra metres. The riding in Kamloops is, apparently, good enough to inspire a few bonus laps, even in the midst of such an epic challenge.

All told, it took Hatton 94.5 hours of riding over 30 days. That’s all on top of his day-to-day schedule, building and maintaining trails with the KPCC.

I caught up with Hatton over e-mail to talk about his inspiration for the challenge, high and low points over 30 unseasonably rainy days in Kamloops, and getting to know a new city in the midst of a pandemic. You can keep up with Hatton, and whatever challenge he sets for himself next, on Instagram.

Canadian Cycling Magazine: Ok, so how did you come up with the challenge of climbing a “metric ton” of riding?

Chris Hatton: Good question! When COVID was in full swing I was feeling a bit lazy and lost. I was hit pretty hard by all the events that got cancelled this year and wasn’t really sure what to do with myself. That put me in a bit of a COVID funk and needed something to help pull me out of it.

I figured that climbing 1,000m elevation a day would be pretty tough and that if I committed to it, then I’d be forced to dial in all the different aspects of my life in order to do it.

I was just genuinely curious to see whether or not it was something that I could achieve. 30 days is a lot of days to ride in a row and I thought it would be fun to see how I’d hold up against it. The idea popped into my head the morning that I started it and I kind of just took it from there.

I also saw that Ben Hildred climbed 55,000m in 30 days a little while ago which was a part of the inspiration. I can’t imagine having to do another 15,000m so good on him for that.

What were the parameters of the challenge?

I made the parameters pretty straightforward – ride my bike 1,000m everyday by whatever means necessary! I’ve got a mountain bike and gravel bike, and used both throughout the duration of the challenge. I’d say I probably rode my mountain bike more though.

I tried to keep it to just one big ride per day, but a couple of times I split it up with a morning ride and an afternoon one.

Also, the riding out here in Kamloops is absolutely amazing so I genuinely just wanted to ride my bike more and more.

Going into this I expected the last week to be the hardest part for sure, but it was actually the first five days that really killed me.

I hadn’t been riding a ton in the weeks prior and I didn’t do anything special to prepare for this, so five 3-4 hour days in a row turned out to be quite the shock to the system! I remember sleeping like 10-12 hours a night and eating absolutely everything in sight. My grocery bill went through the roof it was insane.

Were there any low points, or days when you thought about just calling it and taking a day off?

Oh man, there were definitely some tough days. I’m not sure if I ever really wanted to call it off, but some rides were definitely more enjoyable than others. During the last week it rained for 4-5 days straight, so that wasn’t necessarily ideal. I was also pretty cooked after a couple of big trail building days so riding after that took a little bit of convincing.

I kind of knew that there was going to be a bit of suffering in order to do this so, so I just tried to enjoy everything and anything that came my way. 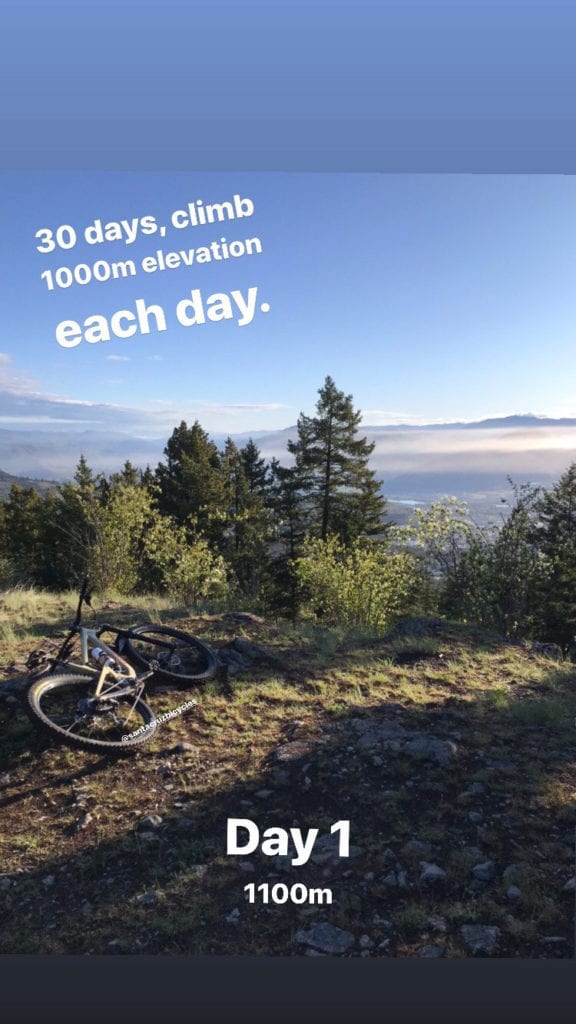 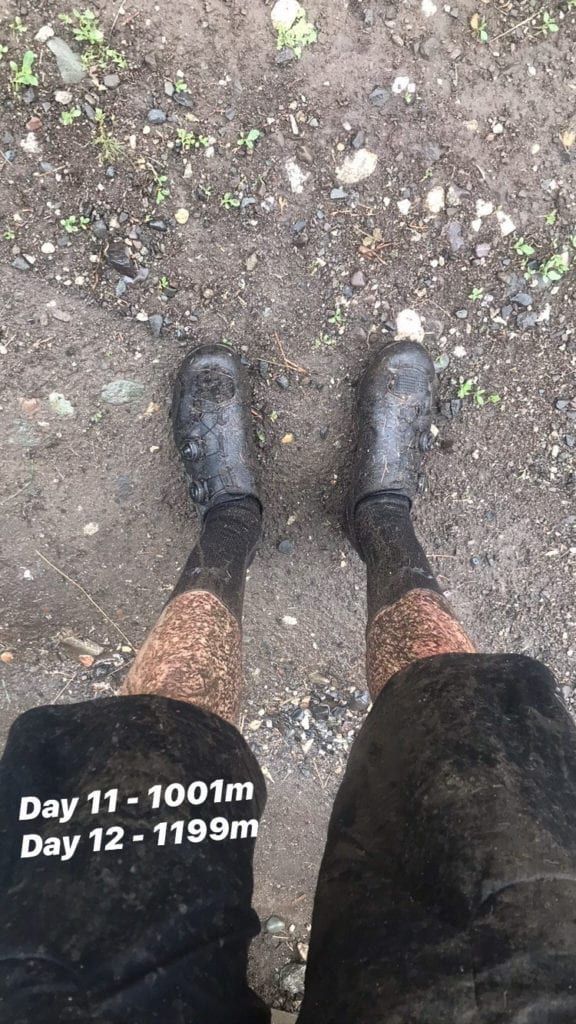 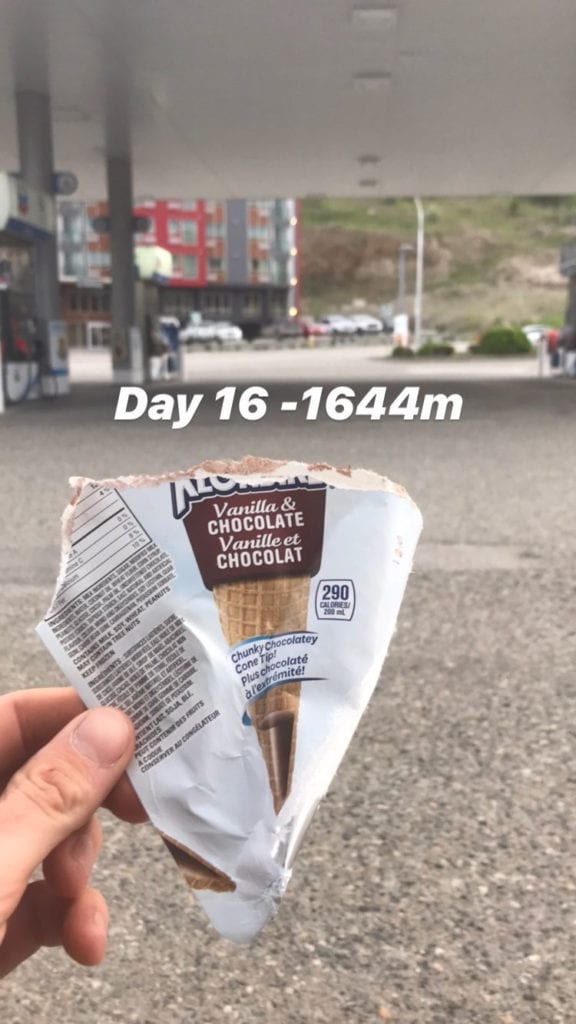 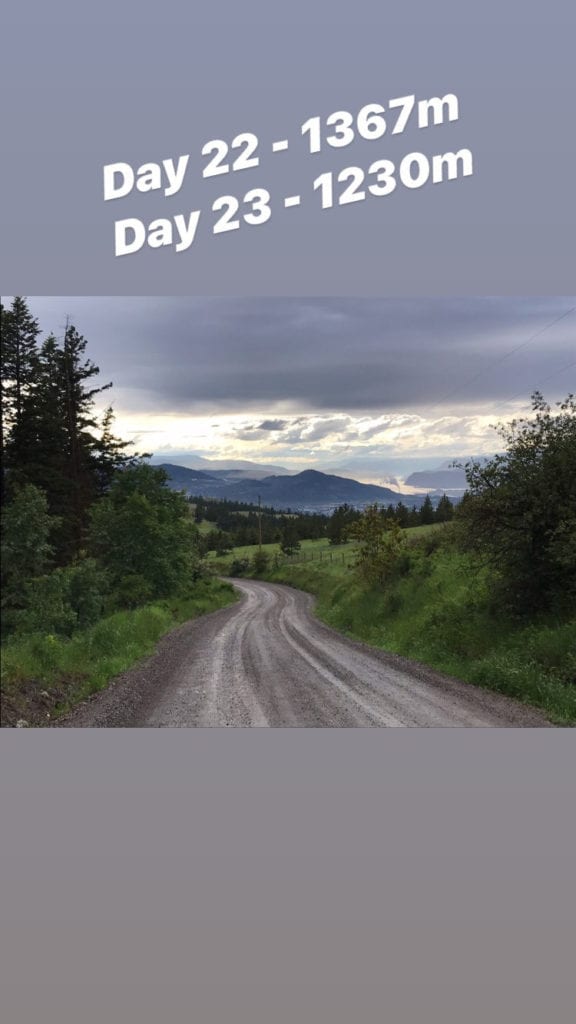 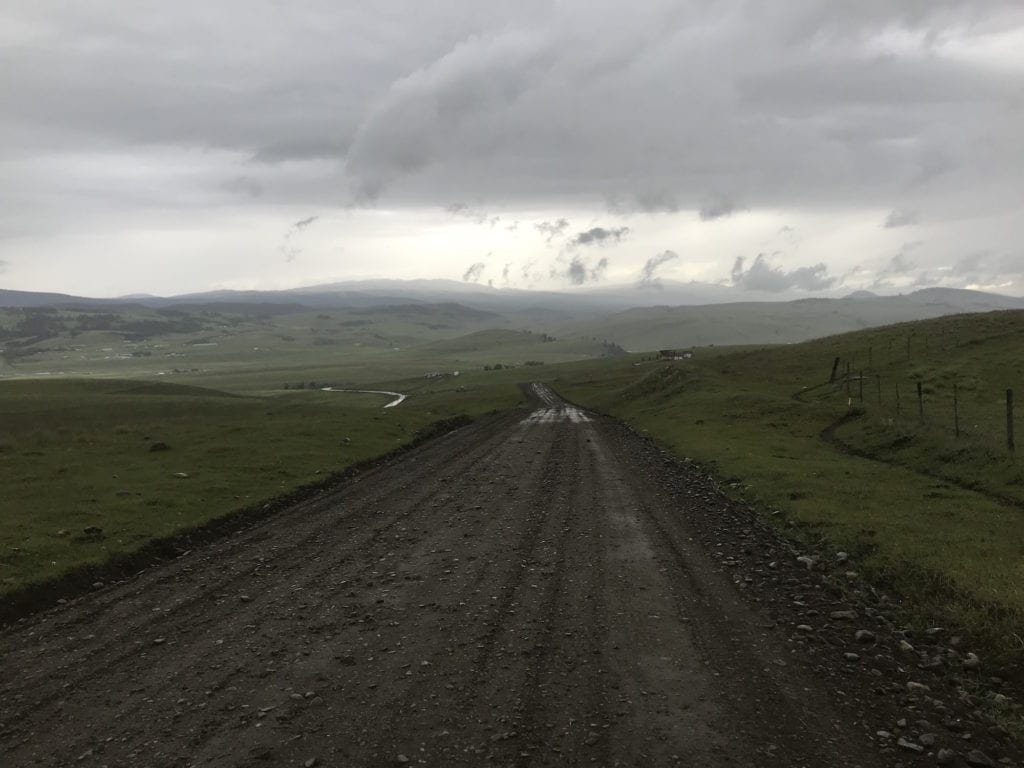 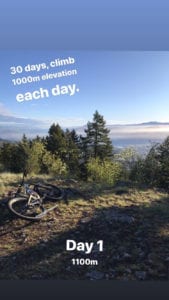 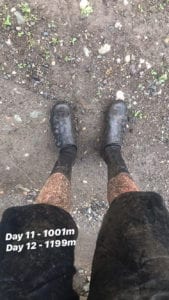 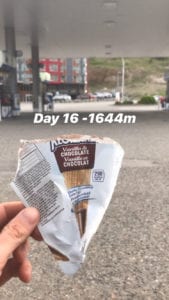 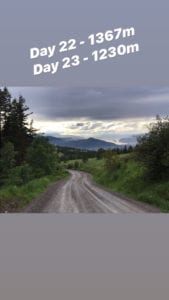 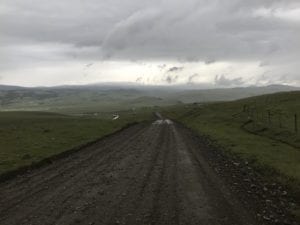 Any strategies for getting through the inevitable low points?

I think it was really my friends and the members of the riding community that helped me get through the worst of it.

Kamloops has a pretty amazing riding scene with a lot of cool people involved in it. Without their support, the last 30 days would have gone a lot differently, and definitely wouldn’t have been as much fun. If anything, just surrounding yourself with good people that can go a long way.

Also stretching. If you’re riding a lot, stretching is a gamechanger.

Is there any one ride of the 30 that stands out as particularly awesome?

Some of the guys had the idea of doing an “Every Trail at Harper Mountain” (one of the local trail networks) ride on one of the coldest and rainiest days so far. I got back from a ride the night before at like 10 pm, ended up sleeping through my alarm, and missed the car ride out there with Ted.

I ended up spending the next 2 hours in the pouring rain pedalling over to the trailhead to ride with them.  We totalled like 5 or 6 hours on the bike and almost 2,000m elevation. Not the biggest day ever but conditions were still pretty wild.

You weren’t just riding, though. You’re also putting in big days building trails. How do you balance two very physical parts of your day?

Good question, and I think it really comes down to sleeping, eating and drinking enough. We usually build during the day and then ride bikes afterwards, so if you don’t pack enough food or water you’re usually suffering pretty good by 6 or 7 pm.

Is trail building your job? or is that all volunteer time?

Yeah I’ve put in around 150 hours of volunteer work for Ted [Morton] and the KPCC (Kamloops Performance Cycle Centre) this year. Ted’s overseeing the maintenance of the trails this summer and was in need of an extra set of hands to help out with, so I figured I’d get involved!

What did your race season look like before everything was cancelled?

I was actually supposed to work with the Norco Canadian Enduro Series this year so that was basically my “season”. This year I was more focused on the event organization side of things rather than the racing side, so most of my attention was mostly based around that. All the races were looking super promising too it was definitely sad to have to pull the pin on the season.

If I had time, I would have loved to have done some of the local XC events like the Vedder classic or even some of the Canada Cups, though. The gravel scene seems to be pretty sweet here too, so I’ve been looking into that a bit as well.

Any plans to continue this kind of fitness when racing resumes? or was this a one-time challenge?

Yeah, I think so! Sounds like racing might be out of the question this year but I’m hoping to take on some XC and gravel events in 2021. I’m pretty keen for some of the bigger B.C. stage races, 100 miler events, and Canada Cups, so we’ll see!

You just recently moved to B.C.. What prompted the move? How has it been showing up basically a month before a global pandemic?

No kidding! It’s been a pretty wild few months to say the least, still amazing nonetheless.

I actually made the move from Toronto at the end of February to work with Ted and the Norco Canadian Enduro Series. Everyone’s been super welcoming and friendly so far which has been great, and we’ve still made the best of things with the social distancing rules that have been put into effect.

It is a bit funny though, I can barely name a single bar or restaurant around here since they’ve all been closed, but I can say that the local trail networks have been sweet. Been spending most of my time riding and building trails so no complaints from me.