Competition is getting fierce at Crankworx Summer Series, and Thursday’s Dual Slalom pushed several pre-race favorites to the edge.

Add a weather delay for rain, and constantly changing lines on a muddy, technical track, and you have the recipie for an exciting day of racing. Crashes, close races and a couple of upsets were all on the menu Thursday in Golden.

“It was another roller coaster,” added Verbeeck after the mud settled. “Slalom is one of the disciplines that I’m always stoked on. It’s the best kind of riding. I’m so happy Kicking Horse put a track together. I think everybody had a really good time.”

While the 25 riders arrived at the series from various disciplines, they earned their invites by being at the top of their fields. Week 1 at SilverStar saw some adapt quicker to unfamiliar race formats than others. This was most true in Dual Slalom, in which few riders have the chance to race regularly. Being an intensely competitive crowd, by Week 2 at Kicking Horse, the competition was much closer from the start.

The single-knock out bracket format leaves little room for error and, with pressure on and the Kicking Horse Dual Slalom drying out after a rain delay to make conditions tricky, errors started to be made.

Upsets start in the Semi-Finals

Finn Iles is showing incredible versatility at Crankworx Summer Series, quickly adapting to different race formats to nab wins in Enduro, downhill and podium in Dual Slalom at SilverStar. The downhill racer’s luck ran out in the Kicking Horse Dual Slalom, though. Up against Mark Wallace, Thursday’s fastest qualifier, in the Semi-Final, Iles slipped up.

After a close race in the first of two runs, Iles and Wallace were both pushing hard to try take the advantage in run two. Wallace lost traction coming into the section of flat grass corners, still greasy from the morning rain. Just has he got his wheels back under him, Iles lost his. The front wheel washed in the loose dirt, sending Iles over the bars.

“In the middle gates there, on the grass turns, we were both pretty side-by-side. I tucked my front wheel in a right-hander, and then it started to hook and I thought ‘I’m going to overturn straight into Finn here.’” said Wallace. “So I kind of looked over to see where he was at, and then just watched him tuck the front and crash. And then I somehow managed to save mine and cruise down. Kind of a hectic way to the finals but I’ll take it.”

Wallace cruised to the finish line, and into the finals.

In the second final, rising young talent Lucas Cruz was up against Dual Slalom veteran, and last week’s winner, Bas van Steenbergen. With no expectations and nothing to lose, Cruz put the pressure aside and focused on his own racing.

“He’s definitely a top contender for Slalom all the time, so I just kind of tried to keep that aside and stay on my own line, and race my own race,” said Cruz of his mindset going to battle against van Steenbergen. “And it worked out.”

Van Steenbergen was ahead after run one but, with Cruz hot on his wheel, went down in a rutted-out corner. Cruz cruised to the finish to face Mark Wallace in finals.

ALN goes head to head with the Queen

After a close race with Miranda Miller in the women’s Semi Final, Andréane Lanthier Nadeau landed her first Dual Slalom finals appearance of Crankworx Summer Series. The Rocky Mountain enduro racer made the most of it, holding nothing back in her attempt to topple the Queen of Crankworx, Vaea Verbeeck.

ALN was full gas on run one, narrowly averting disaster after touching her back wheel trying to stay low over the final jump before the finish line.

“Bin it or win it, right?” a laughing ALN told the camera, as she headed up for the second run with narrow advantage over Verbeeck.

“The last one, I knew I had a slightly faster lane, and we were super close on the first run, so it was really whoever was going to make it first through the finish line,” said Verbeeck. “I spun through the second last flat corner gate where I was trying to get on the gas to get that margin before the finish line, and I believe she did too, but I didn’t know. You’ve just got to push as hard as you can until you’re done, and that’s when you know.”

Verbeeck was on her game, and on her lines for run two, pulling ahead of ALN to take the women’s Dual Slalom win.

Mark “The Shark” Wallace was Thursday’s fastest qualifier in Dual Slalom. Asked if he expected to end up in a Slalom final this summer, the downhill specialist was clear. “Absolutely not, but I was pretty excited to do Slalom. I’ve never really raced it much… I just had a blast today.”

In the final, he faced Lucas Cruz. The first-year elite downhill racer from Pemberton comes into 2020 with a resume, he was third in the junior men’s World Cup standings in 2019, but little Slalom experience.

Cruz put the pressure on right away, taking the lead in round 1. In the second round, on the slower side of the course, Wallace to the win, but Cruz was close enough to take the win overall.

“Racing’s racing. Always fun and I had a great day,” the Pemberton rider said after his win.

With several early favorites racing for points in the overall, the small finals were no less heated than the gold medal matchups.

Casey Brown came from behind to make up the first run deficit to Miranda Miller and take bronze in the women’s race. 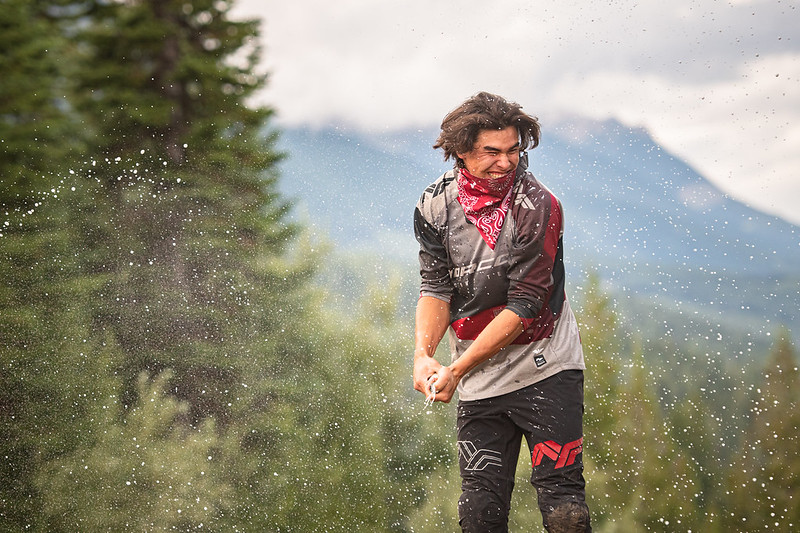 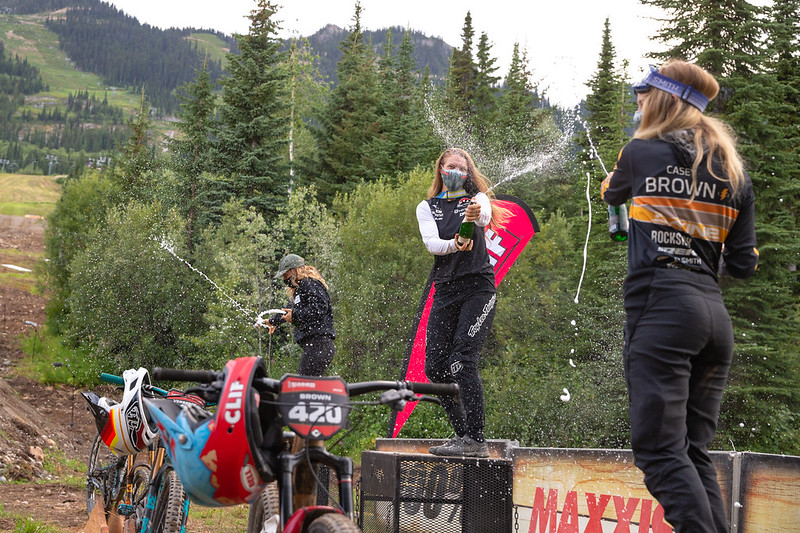 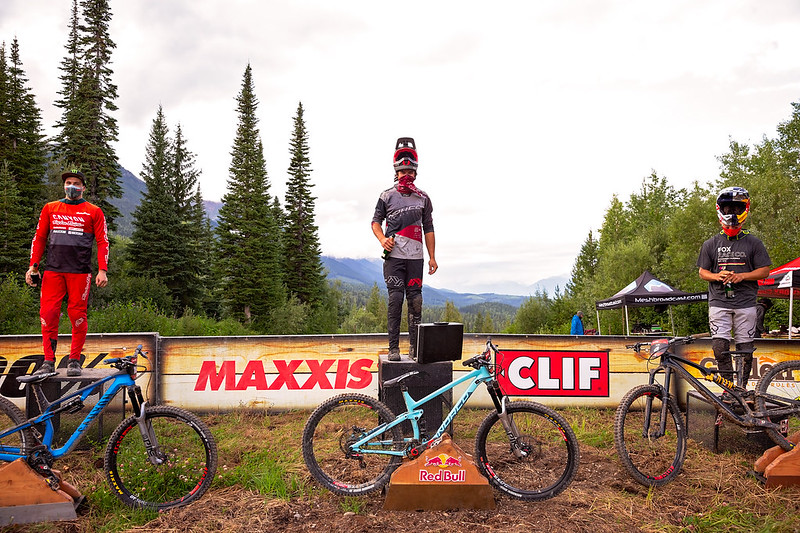 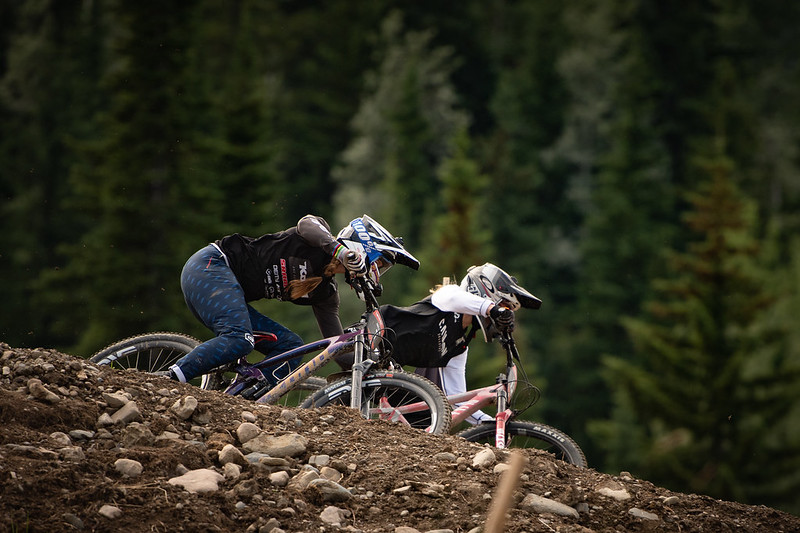 Miranda Miller on her way to the win against Ainhoa Ijurco. Photo: Chris Pilling 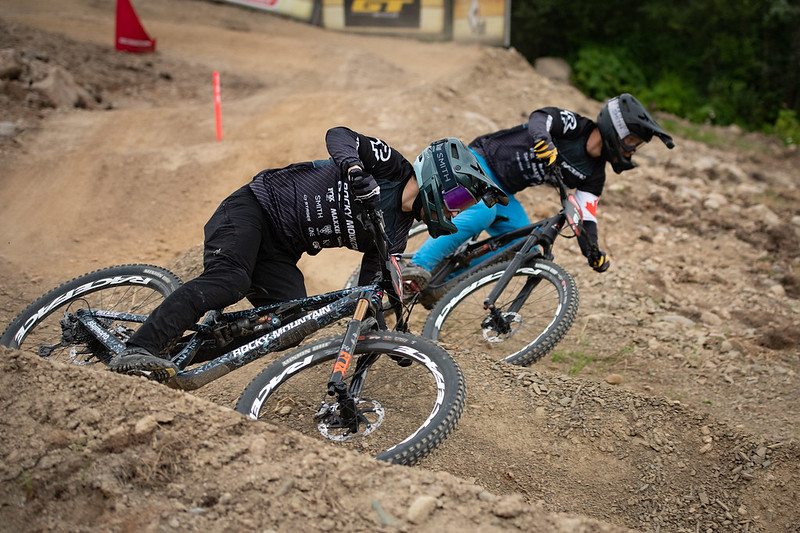 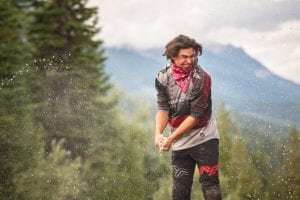 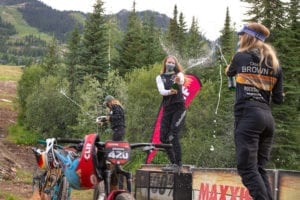 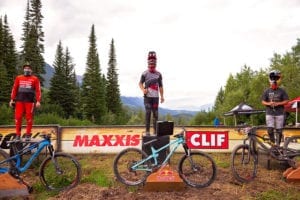 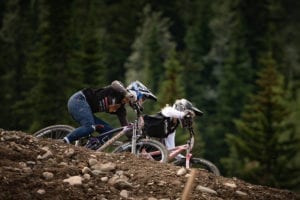 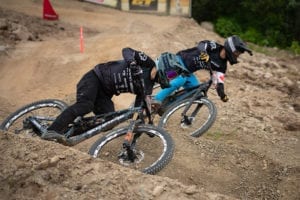