It was an auspicious return to Mont-Sainte-Anne for Canada’s cross country athletes on Sunday. National champion Emily Batty looked primed for a big performance at home, only to be taken down within sight of the startline by her second crash in one weekend.

Sandra Walter had a better day out, netting a big top-15 performance and top Canadian result.

At the front of the field, Jolanda Neff made a long-awaited return to the top of a World Cup podium while Tituon Carod landed his first elite win. 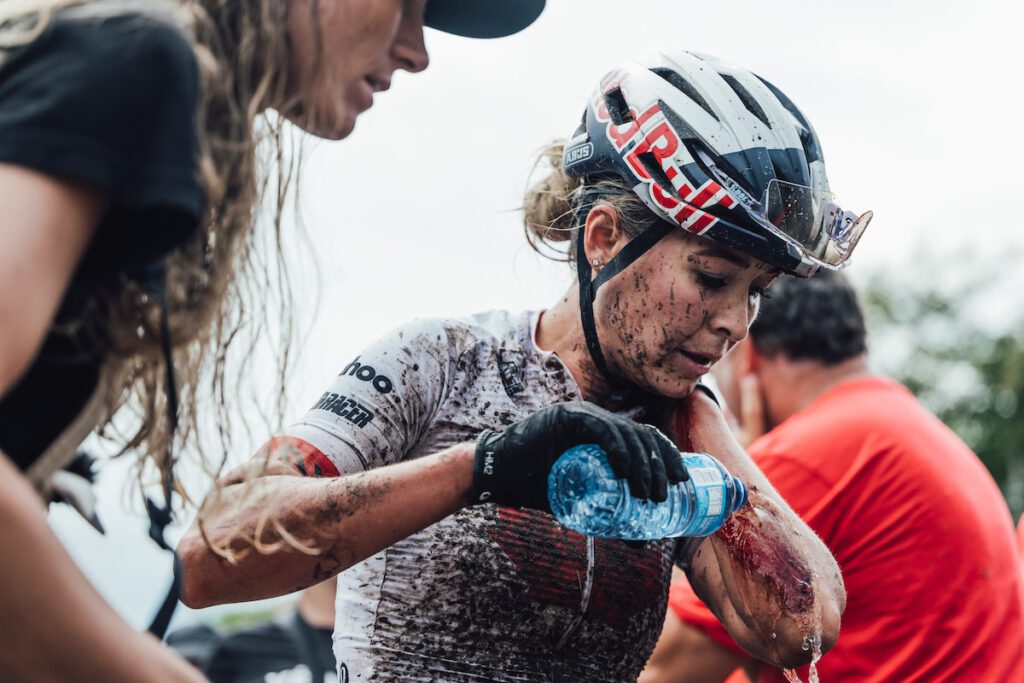 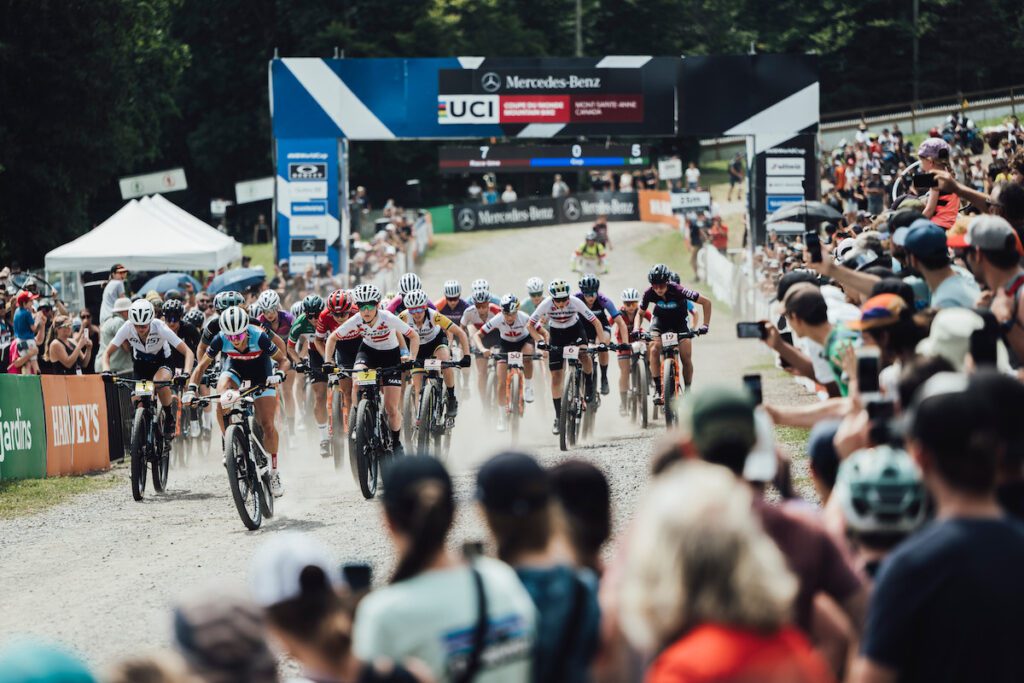 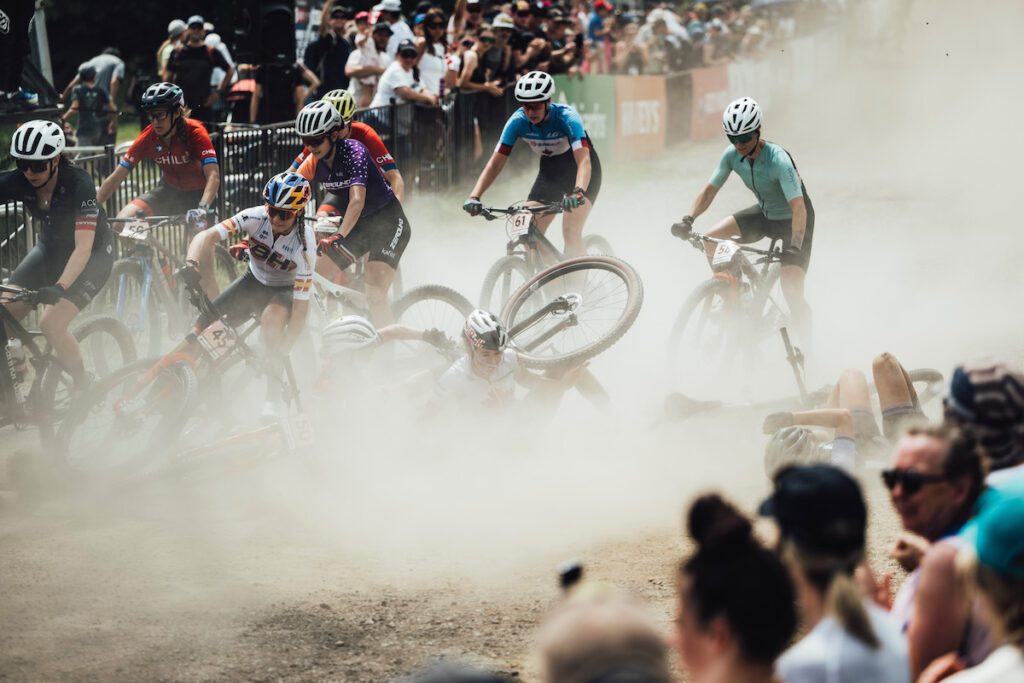 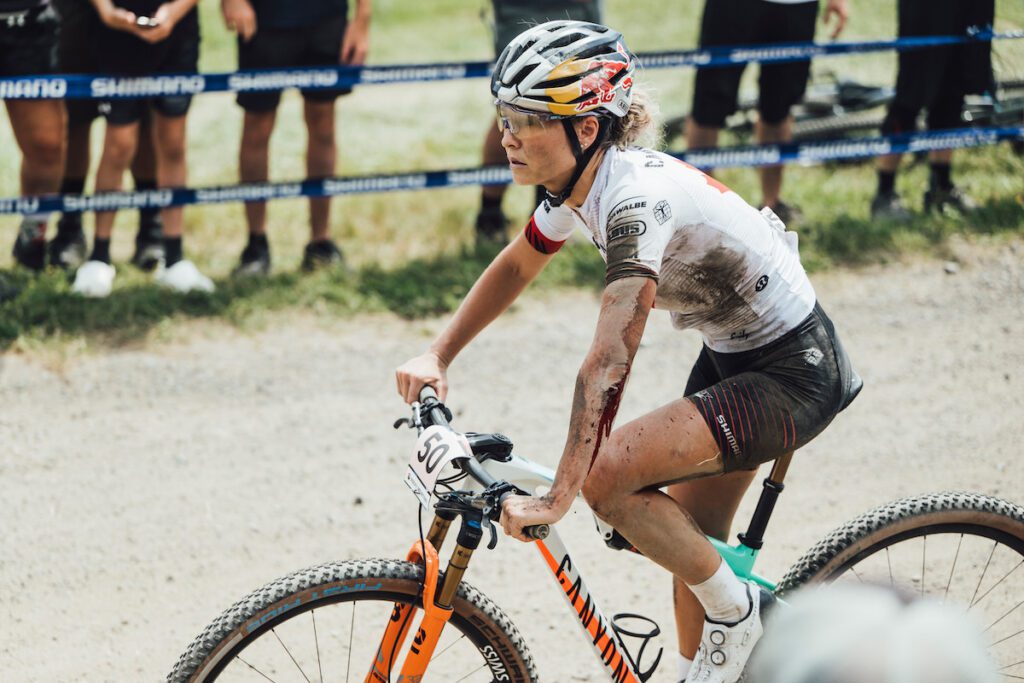 When the dust settled, a bloodied Emily Batty collected herself and set back out onto the course. Photo: Bartek Wolinski / Red Bull Content Pool 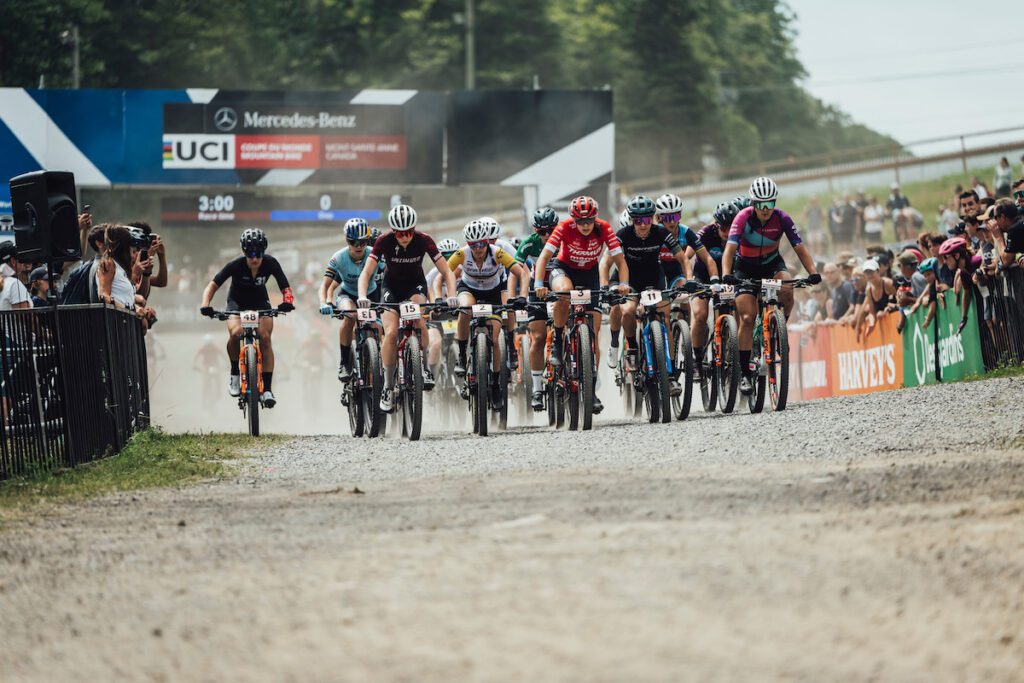 The field continued, with Jenn Jackson near the front. But the gap behind the leaders hints at what happened behind. Photo: Bartek Wolinski / Red Bull Content Pool 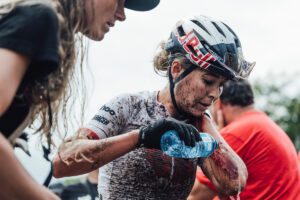 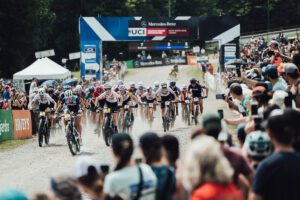 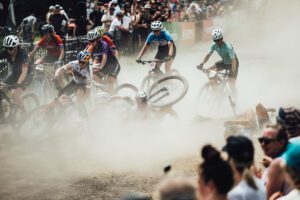 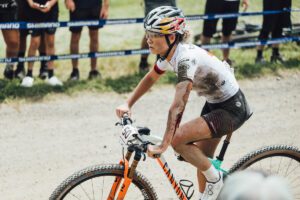 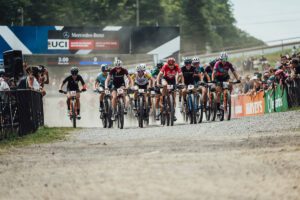 Sunday’s elite women’s race started off on the wrong foot when, just moments after the start gun fired, Emily Batty (Canyon MTB) was caught up in a heavy crash in the middle of the pack. It was difficult to see what happened, exactly. But when the dust settled Batty emerged, slowly, with blood streaked down her arm and clearly frustrated to be taken out by crashes off the start for the second time this weekend. The Canyon rider had big expectations, both from racing at home in Canada and because of her rapid, upward trajectory at the World Cups leading into the Mont-Sainte-Anne weekend.

Batty would battle through the race, fighting her way back to 18th at the finish line. An impressive show of resilience from the national champion.

Neff takes on the rain

The weather turned suddenly in Mont-Sainte-Anne, with rain damping down the dust for good. As it did, the shape of the race changed, too. Jolanda Neff (Trek Factory Racing) attacked off the front, using her formidable technical skills to gain and then extend her advantage. Neff skillfully escaped a few scary moments while riding dry tires on a now very wet Mont-Sainte-Anne track, crossing the line with a 56-second winning margin.

It’s the 2021 Olympic champion’s first World Cup win since 2018, just two weeks shy of four years since her last win in Les Gets.

“I just knew there were so many moments on track where I could gain a millisecond, it’s so technical, that I knew if I could be on my own, I could take advantage of that,” Neff said of her decision to attack so early on in the race.

It’s Neff’s fourth win at Mont-Sainte-Anne, matching the record of Julie Furtado and Canada’s own Catharine Pendrel. The Olympic champ was clearly enjoying racing on a track where she’s had so much success.

“I had so much fun today. It got really slippery at one point, the rain was insane – I think that was more rain than Snowshoe, Neff said of the sudden weather shift. “That changed everything, but I enjoyed myself so much, that was so much fun.”

Mona Mitterwallner and Haley Batten played out a thrilling last-lap battle for the podium positions. The U.S.A. rider led, gaining ground on technical sections while the young Austrian closed back to her wheel as the course smoothed out. Mitterwallner waited patiently to open her sprint, passing Batten in the short finish straight to take second place.

Italy’s Martina Berta (Santa Cruz FSA) earns fourth while Alessandra Keller (Thomus Maxon) recovered from a mid-race crash to round out the podium in fifth.

Carod continued to push, with his lead approaching two minutes at some points. At the line, the French rider held a 1:41 winning margin over second-place rider, his teammate Filippo Colombo. It’s the French national champion’s first elite World Cup win.

“It was just awesome. It was a really good day. I felt good on the uphill, but especially on the downhill. The rain in the women’s race helped me a lot, I felt more confident on the downhills,” Carod said after the finish. The French rider had stated his intentions at MSA last week in Snowshoe. “I wasn’t certain for sure, you never know what a World Cup will bring. But this track really suits me and I knew I was in good shape. I knew I could do a good job today, and that’s what I did.”

Valero takes third, Braidot fourth and de Froidmont fifth. Nino Schurter, likely still hurting from his big crash at Snowshoe, W.Va., crossed the line with that group, but off of the podium in sixth after pushing the pace in the chase group for much of the race.

Schurter was rewarded for his effort with the World Cup leader’s jersey. Valero closes in on the Swiss star, but Schurter still has a 125-point advantage over the Spaniard with one round of racing remaining.

It was a rough day out for the home team on Sunday, with only Tyler Orschel (Canyon Devo) cracking the top-30 in 29th. Following him, and finishing on the lead lap, were Léandre Bouchard and Victor Verreault, both of Foresco Holdings ProCo RL in 35th and 36th, Andrew L’Esperance (Maxxis Factory Racing) in 37th, Quinton Disera (Canyon Devo) in 39th and Peter Disera (Norco Factory Team) in 40th. Malcom Barton, Rahael Auclair, Anthony Bergeron, Felix Belhumeur, Alexandre Vialle, Philippe St. Laurent and Simon Petitclerc finished 48th to 55th, all off the lead lap.