Sunday was a wild ride for the Rocky Mountain Race Face Enduro Team. The Enduro World Series returned to home turf for the first time since 2019 and all eyes were on the home team to put down some big results. After two physical days of racing, team walked away with a win from Jesse Melamed, the top team award, two podium finishes and just missed out on a third.

We caught up with Melamed, who landed his second EWS win and moved into the series lead, Remi Gauvin who earned his first Whistler EWS podium, and Andréane Lanthier Nadeau, who led the women’s race until the final stage before a series of mechanical struggles and a tough battle through injury ended in a still-impressive fifth-place finish. 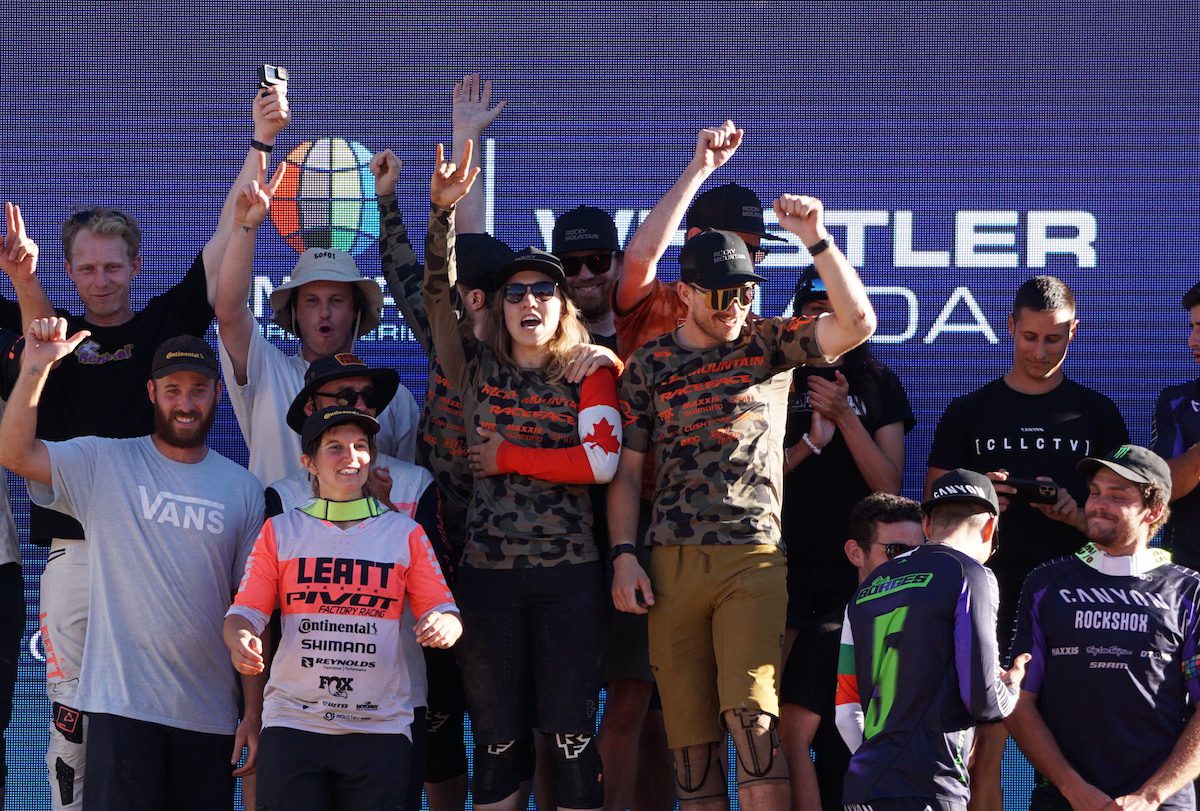 CanadianMTB: Congrats on a big win at home! This is your second EWS win in Whistler. Does the second time feel just as good?

Jesse Melmed: I would say they’re similar. Doing it the first time was just a huge relief. This one felt really good because as soon as I got home from Europe it was on my mind. I couldn’t not think about it. I wouldn’t say I was stressed but I every day I was focused on it. To win is a really proud moment for myself.

It felt good to see I’d won because I’d flatted earlier and my wheel was on the verge of not holding up. Every checkpoint I passed on the last stage, I was just thinking “Ok, I’ve made it this far, now I’ve made it this far and it’s still together,” and I was getting progressively more stoked. I crossed the finish line and figured it had to be enough. I didn’t see Richie [Rude, who flatted on the last stage] out there, but I still thought it was enough.

You didn’t see Rude when you passed him on course?

JM: No, I have no idea what happened, or where it happened.

How does it feel to be on the podium with Remi?

JM: Oh, it’s so cool. We’ve been at this together for a long while. I’m really bummed for ALN because it could have been the three of us. But she was riding a good race anyways, so she knows she can do it. But yeah, Remi and I have been through a lot. To get him on the podium and to be there with him is going to be so cool. 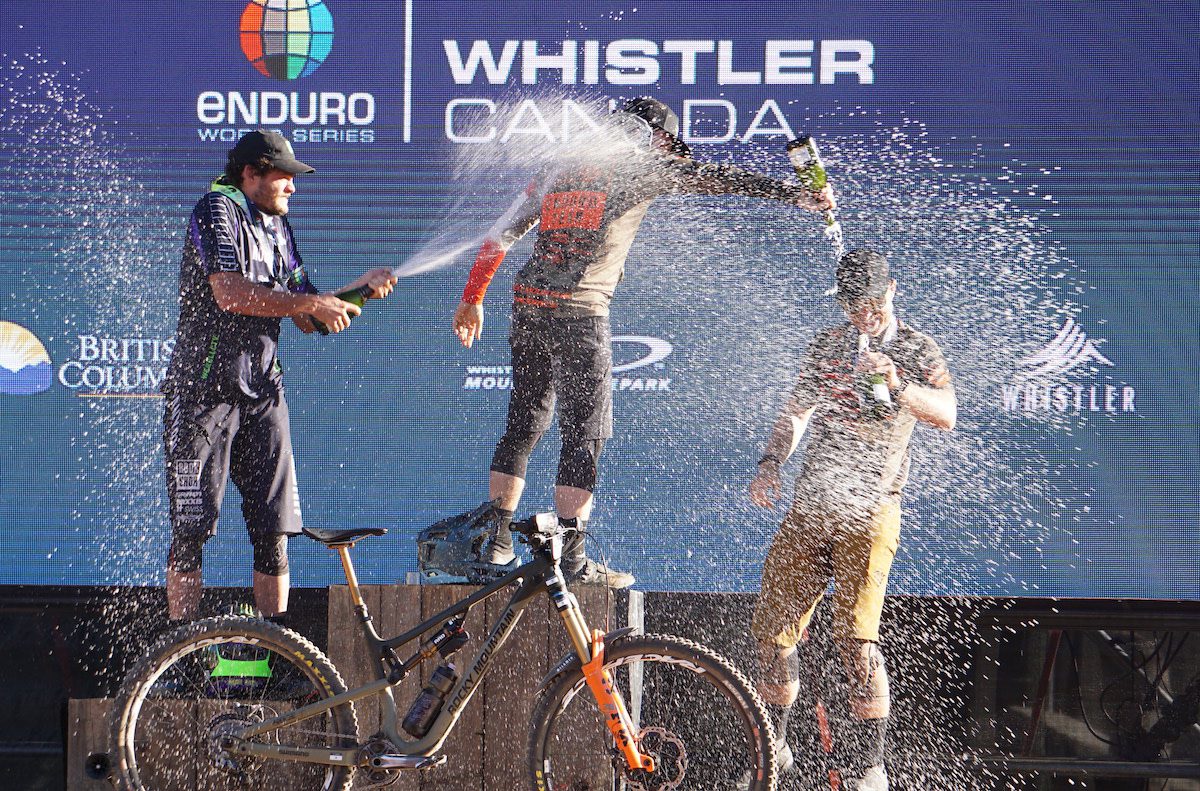 Is there more pressure riding at home?

JM: I tried to tell myself there wouldn’t be pressure because it was going to be really fun with everyone cheering. But then the first two stages were so intense. Everyone was cheering so loud that I had to pedal so hard and thought “I better have a good one.” But I think that, while they want me to win, they just want to cheer me on. So there was pressure, but mainly from myself.

JM: It’s so sick. It’s built really well. The features themselves, the step down and step up, are so smooth. It’s sick being in a race run and just pulling up as hard as you can and going as fast as you can. It was really cool.

CanadianMTB: You and Jesse are on the podium together at home, in Canada. That must be a pretty crazy feeling.

Remi Gauvin: Yeah, that’s definitely a dream come true. I mean, I’ve thought it could happen once or twice, but for it to actually happen is something else. It’s amazing. So stoked to get my first podium in Whistler. My parents are here from the Island [Ed. Vancouver Island], my buddies are here, it’s just an awesome day.

I was in sixth going into the last stage so I had to fight really hard to move up four positions.

How do you pace a day like today, when it’s this hot, to make up that time at the end?

This is the first time Whistler’s hosted an EWS in a couple of years. Does racing at home come with any pressure? Or is it more fun?

Anréane Lanthier Nadeau: It used to. It took me a couple years to figure out how to race in Whistler but I have it dialed now. I know that people support me and love me here and I really let that in this week. All my friends came with t-shirts with my face on it – I was shocked. I thought, why did I ever doubt that support? I really embraced that this weekend and used it to fuel performance. I love a home race now.

It looked like it was working, you were sitting first going into the last stage. What happened there?

ALN: I had a lot of small things today, nothing huge. I had a chain mishap on Stage 3, I raced more than half of that without a chain. That actually made me ride really well. I was careful with my breaking, pumping and keeping my eyes up even though I was really tired. Sometimes you can break more and pedal more because you’re tired, so it actually made me ride really well. That gave me a second win. I realized something had happened, but I was still leading. So I did the hike to Ride Don’t Slide [Ed. Stage 4] on my sprained ankle and that was… horrible. Ride Don’t Slide when Ok, I haven’t actually looked at the results yet. At the bottom, I fuelled up and had some water.

As I was about to go pedal I realized I had a flat tire. It wasn’t sealing with a CO2, so I had to get the CushCore out. I had so much arm pump from Ride Don’t Slide that I was having a hard time, then my tube wasn’t working. The boys were starting to trickly in so I knew I was late for my next start and losing time. The boys helped me fix it up and I pedalled up to Stage 5. The transfers have been really hard today and I was really tired already. That transfer was the deepest I’ve ever gone, and I’ve gone to pretty deep places. My buddy McKay [Vezina] was there. He grabbed me by the chin-bar and said “You are not fucking losing this race on the transfer. Keep going.” He helped me push my bike, Jose [Borges] from Canyon too. We got to the top within my start window and then … there was a 40-minute delay.

That delay actually gave me time to recover. But I had pumped up my rear tire to 30 p.s.i. because, with the tube, I didn’t want to re-flat. I dropped in knowing I had it. I’ve been first before and dropped into the last stage trying to out-ride myself. But I just rode instead of trying to do anything crazy and nailed all my lines at the top perfectly. I got to the berm before the big drop and knew I needed some speed so I decided to push really hard in the berm before it. But I didn’t calculate that, with my rear tire so hard, it would be different than usual. My back wheel went, and that was it.

There are two more rounds in the next two weeks. Does leading all race today give you confidence going into those U.S.A. rounds?

ALN: I’ll get there. But it’s also carrying a lot of ankle pain, so I have to manage that. It’s a hefty racing block. We have to travel to the East Coast tomorrow morning at eight. It will be a challenge.