As electric mountain bikes grow more and more commonplace on trails across Canada, eMTB riders are looking for ways to gather together. While most events focus on traditional race formats, BC Bike Race decided to try shock the ebike community into collecting around an entirely new format. The result, the first ever Mega Volt, took place in Vancouver Island’s Cowichan Valley from Oct. 22-24.

BCBR are veteran race organizers with over a decade of experience putting together races and rides across B.C. Watching the new bikes emerge, and riding them themselves, the organizers had an idea that the electrically charged wheels opened the door to something new, a race with an uniquely electric feel.

So what is a Mega Volt?

“The Mega Volt is the first event of its kind,” said Jesse Melamed, Rocky Mountain’s top Enduro World Series racer. With his season done for 2021, the No.3-ranked EWS athlete headed to Cowichan to join the Mega Volt. “It’s an ebike event, it’s a race, it’s a ride. Basically, we’re out here having fun with friends. There’s a bit of competition here and there, but it’s not your average race.”

While the idea, a race that’s not quite a race (more on that below), is new, the trails are not. Mountain biking is still mountain biking, whether there’s an assist or not. The Cowichan Trail Stewardship Society (CTSS) maintains a mix of classically technical B.C. trails and new-school flow lines, and welcomes eMTB to the area. Despite a late October race date, Cowichan, which takes its name from Quw’utsun, an Indigenous word meaning warm land, brought warm, if not dry weather for the debut event.

The three-day event combined two race days, with three stages, followed by a more social ride. With limited spots on the start list for its first year, the Mega Volt had a more relaxed vibe than some larger races.

“You know what it reminded me of, the first mountain bike races in the late 80’s; low-key, grassroots, lots of fun,” said Elladee Brown, multiple time downhill national champion and all-round legend of Canadian mountain biking. “No one cares who’s first or who’s last. Tons of fun, and just a group of like-minded people gathering and riding bikes.”

While there were race days, with distinct formats designed to reflect the different bikes, the first Mega Volt was focused on the experience. For some present, it was a chance to connect with new and old friends for three days of riding. For other eMTB-ers, it was the first chance to meet up with and ride with other electric bikes. For all, it was the first event designed specifically for the new machines.

As you might expect from the 80s metal themed name, Mega Volt was all about good times. Both the format and the atmosphere created a social vibe, with more relaxed – though far from slow – starts to the day that let the trails create separation as the event wore on, in place of the usual elbows-out inward focus of a race day.

Friday’s first stage, a Consistency Trial, set the tone. With racers trying to set the most even lap times on a shorter circuit, the usual pre-race nerves were replaced with casual conversation. It was still 13 kilometres of technical riding on lower Maple Mountain, but the fall colours and unexpectedly warm conditions saw many riders head out in groups to explore the mountain once official racing was done.

In the morning, the Tech-Gnar Challenge delivered the full Maple Mountain experience: a lap of the lengthy Xylem climbing trail and a full serving of the technical descending of Maple Syrup. The group set off together, slowly breaking into smaller groups on the technical rocks and wet fall roots of the climb. Riders, or racers, split up more as they dove into the slick rock features of the long descent back to the finish line.

A few hours later, the racers gathered again for the Flow-Master challenge. This third Mega Volt stage showcased a different side to Maple Mountain. After a more technical climb than the morning, riders experienced the new flow-trails of Story Trail and Phloem, a more high-speed and easy fun path back down the mountain.

After two days of competition, winners were crowned and victories were celebrated. The competitors gathered again, this time on nearby Mount Tzouhalem for a social Poker Challenge. With a “Weather Bomb” looming on the satellite radar, riders were happy to start under mostly-dry conditions and see how long their luck would last.

Luck was key, as placing was determined by cards earned, not speed. Racers “drew” five cards for their first lap and another two cards for every additional lap completed. Best hand wins the day. This left racers free to divide up and find friends of similar pace, then re-organize as the terrain shifted from tech to flow.

As riders rolled in, and finisher’s belt buckles for the first-ever Mega Volt were handed out, the rain started to fall. Riders enjoyed snacks and refreshments and traded stories from North America’s first multi-day dedicated eMTB event. 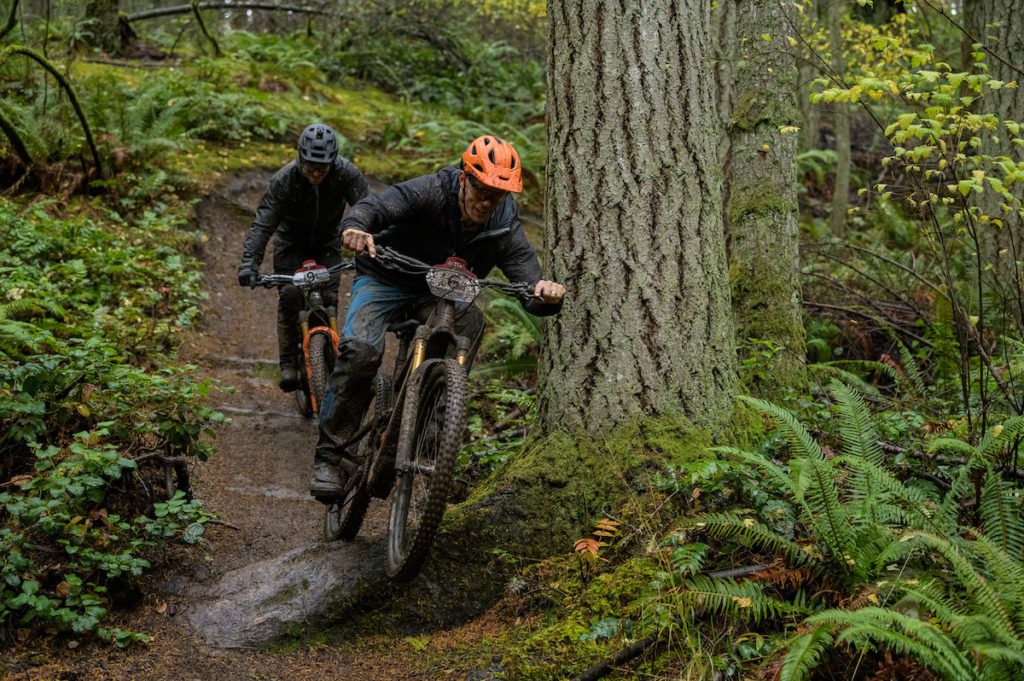 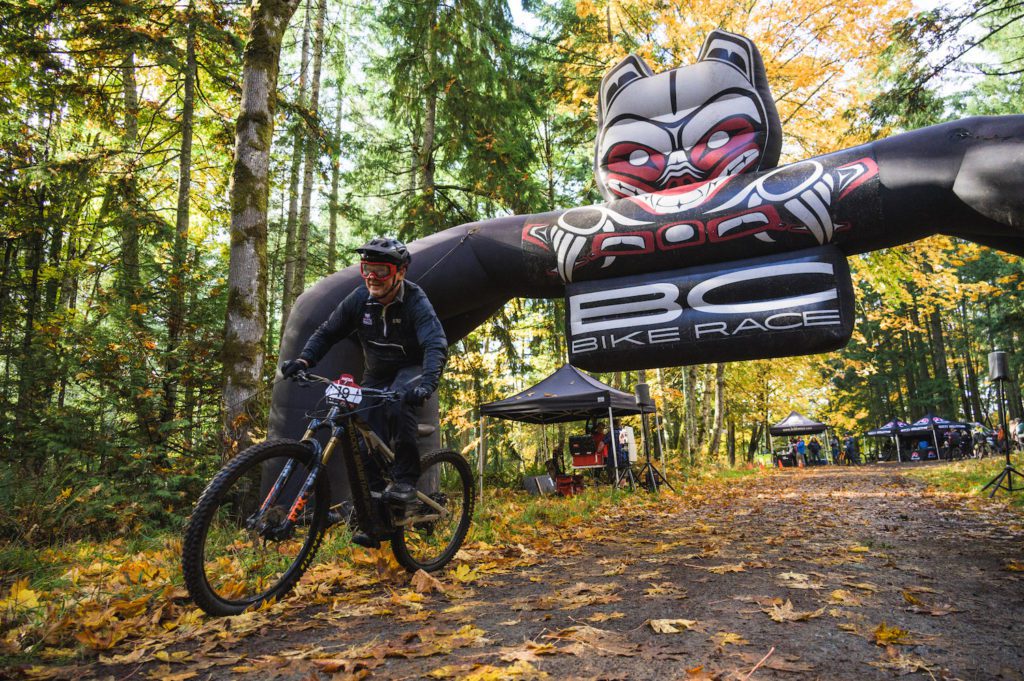 Race organizer and BCBR co-founder Dean Payne was behind the bars for the first Mega Volt. Photo: Dave Silver 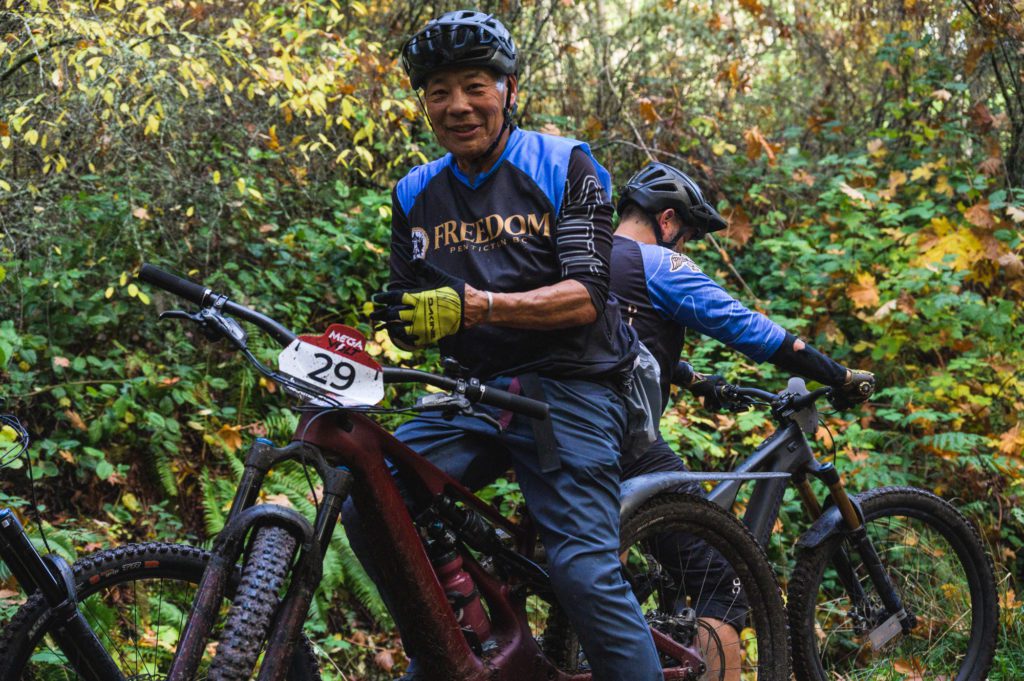 The Freedome Bike Shop crew Travelled all the way from Kelowna to get a taste of west coast weather. Photo: Dave Silver 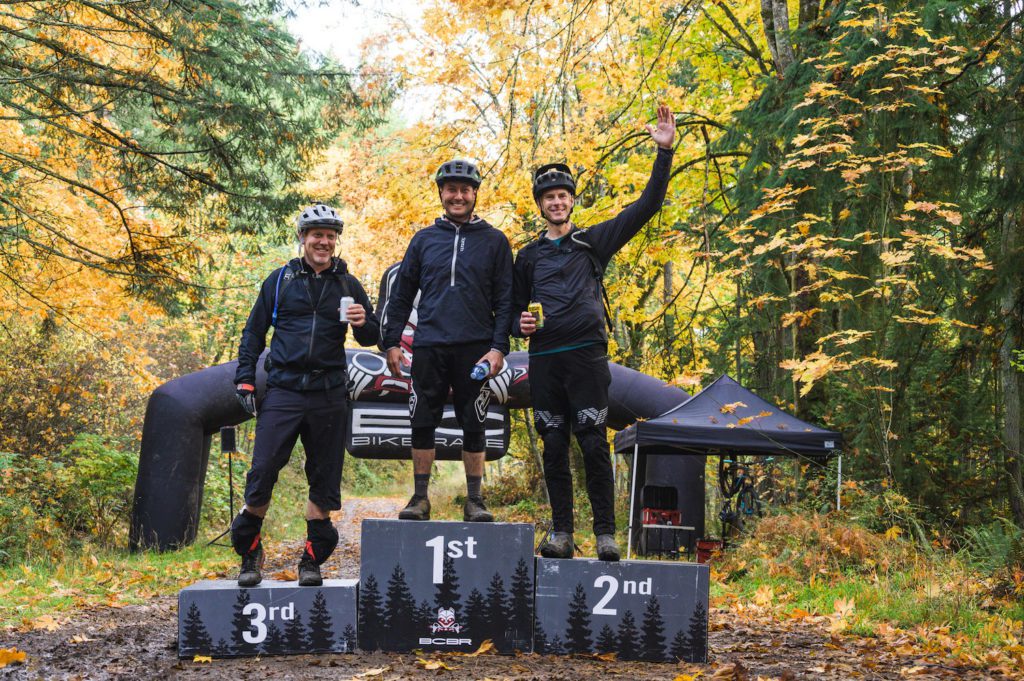 There were podiums, too. Photo: Dave Silver 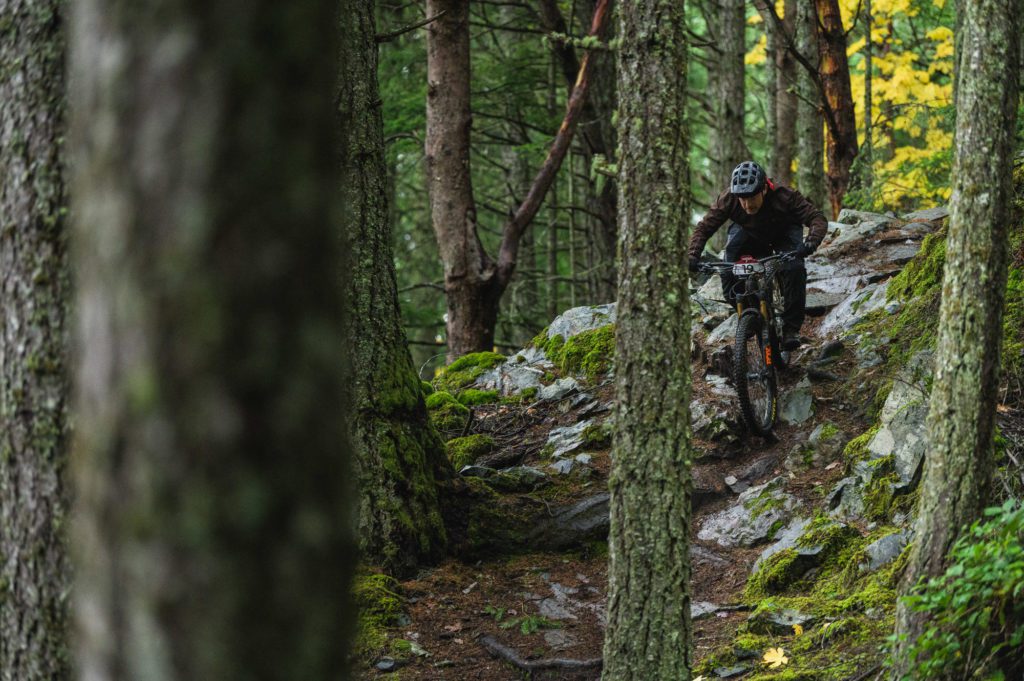 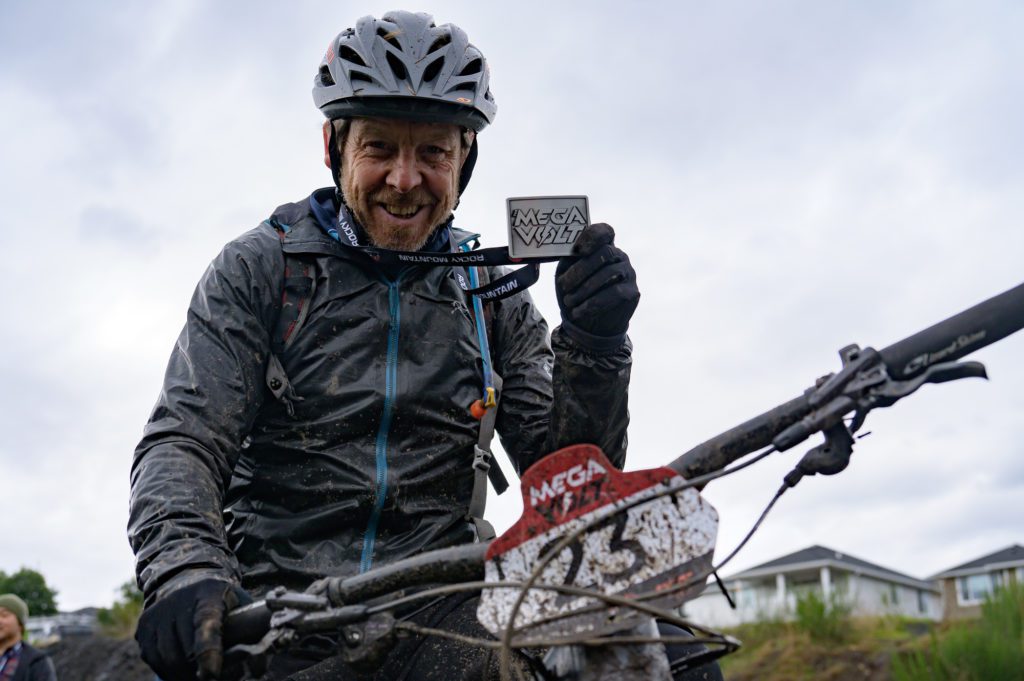 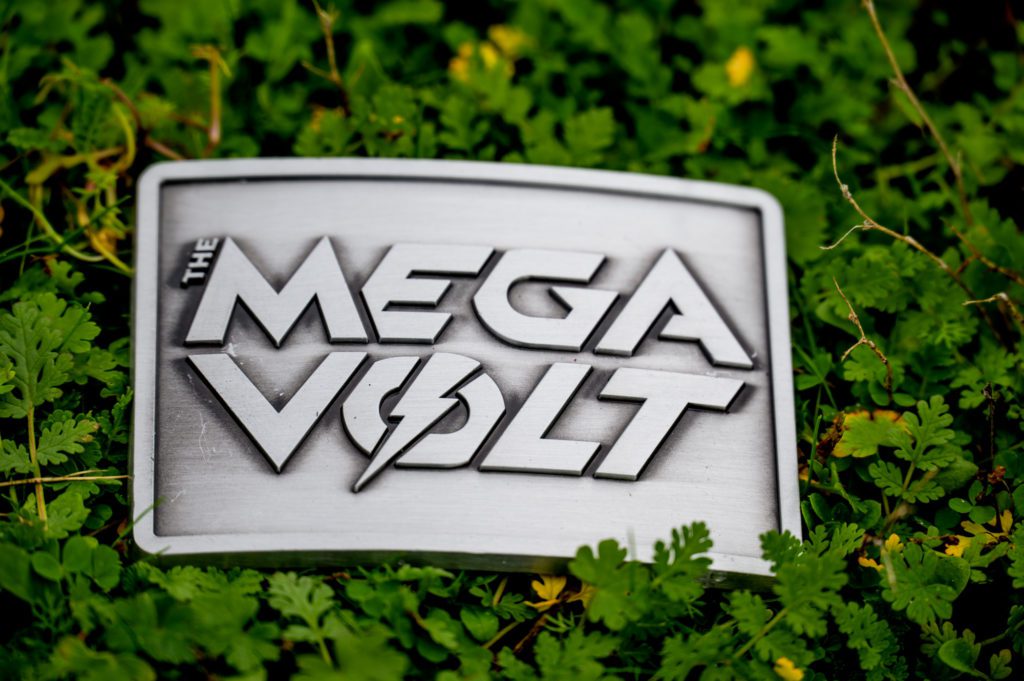 2021 BCBR Mega Volt is in the books. Photo: Dave Silver 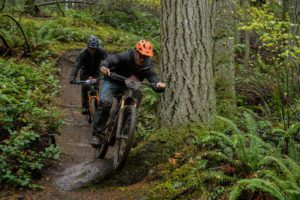 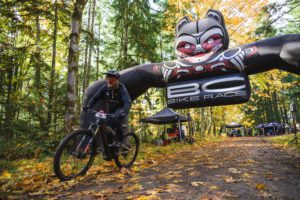 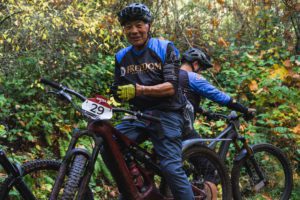 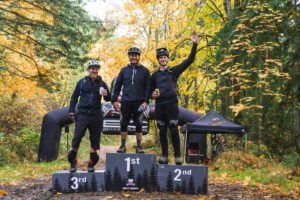 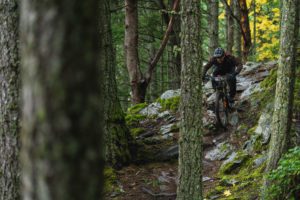 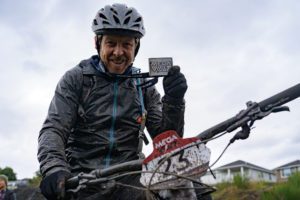 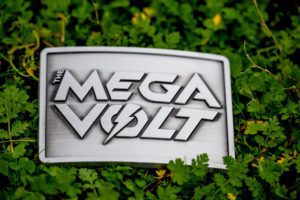