When Cannondale released the Habit line of trail bikes earlier this year it was a surprising move from the Wilton, Conn. company.

The Habit wasn’t surprising because it had one fork leg, or two rear shocks. Instead, the Habit was a straightforward trail bike from a company generally known for its refusal to play by the accepted rules of design. 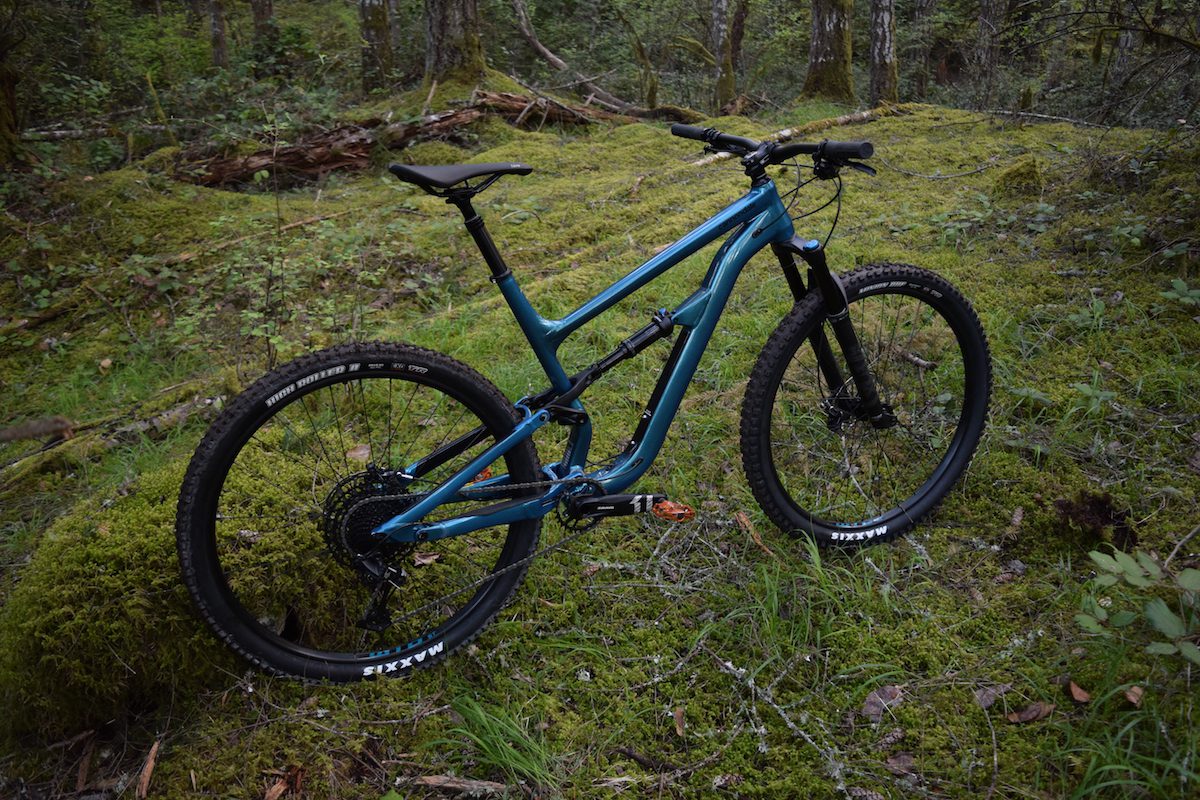 That’s not to say the Habit doesn’t have a couple tricks up its sleeves. Cannondale designed the 130 mm-travel bike around its Proportional Response suspension design. The new approach to size specific engineering relocates the pivot location for each frame size. The point is to account for how a riders center of gravity influences suspension performance so that riders of all sizes get the same experience on trail.

The result is a bike that lacks most of the novel or proprietary notes associated with Cannondale, but has a lively personality of its own. 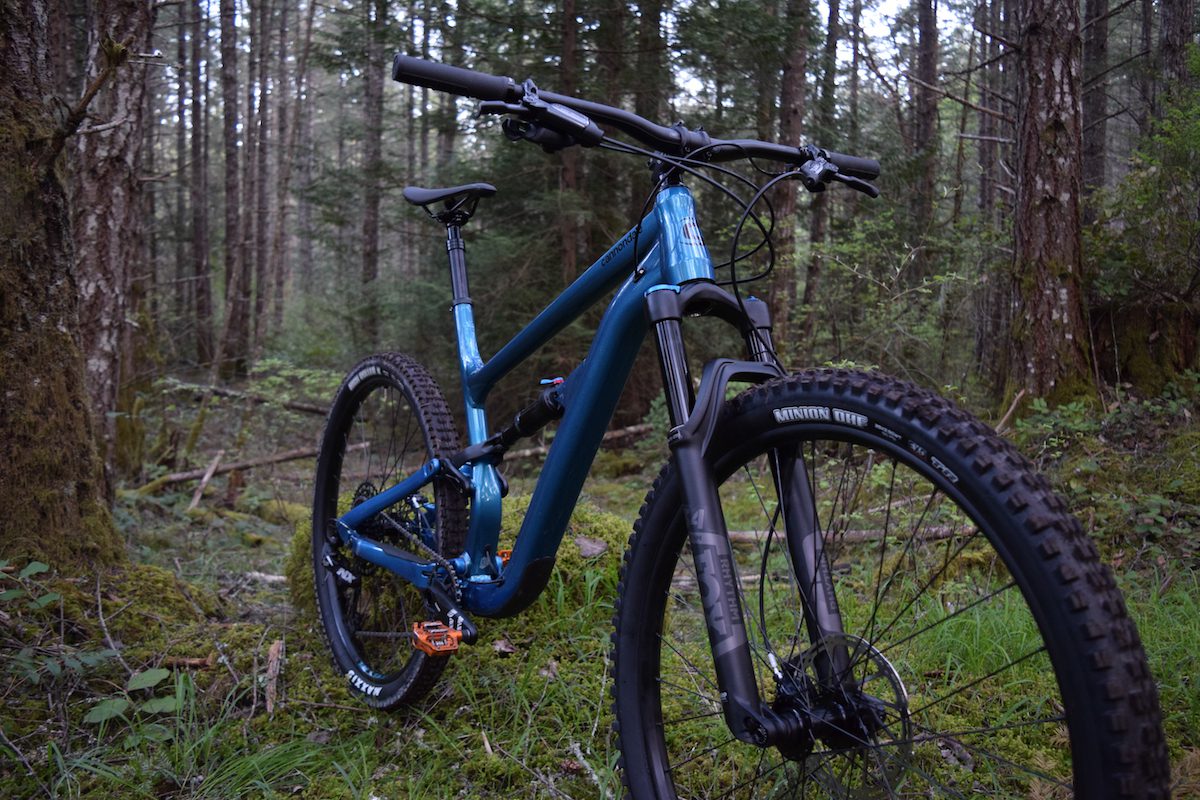 The Habit I currently have the chance to test is the striking Deep Teal coloured Habit Al 4. Build around the aluminum version of the frame, this model sits squarely in the middle of the Habit line. Bringing the Proportional Response design into play, the test bike is an XL size frame, built up with 29″ wheels. The frame can be converted to 27.5-plus size wheels via a flip chip on the suspension linkage.

Fox takes care of the Habit’s suspension. A Float Rhythm 34 up front matches with a Float Performance DPS EVOL, with three position adjust, out back. While the bike sits squarely in the trail bike category based on its 130 mm travel numbers, Cannondale signals that the bike is intended to handle whatever you through at it by specing some serious rubber across the Habit line. Maxxis Minion DHF 2.5″ WT keeps the front wheel pointed where you want it to go, followed by a 2.3″ High Roller II out back. These tires are mounted on WTB ST i25 TCS 2.0 wheels. 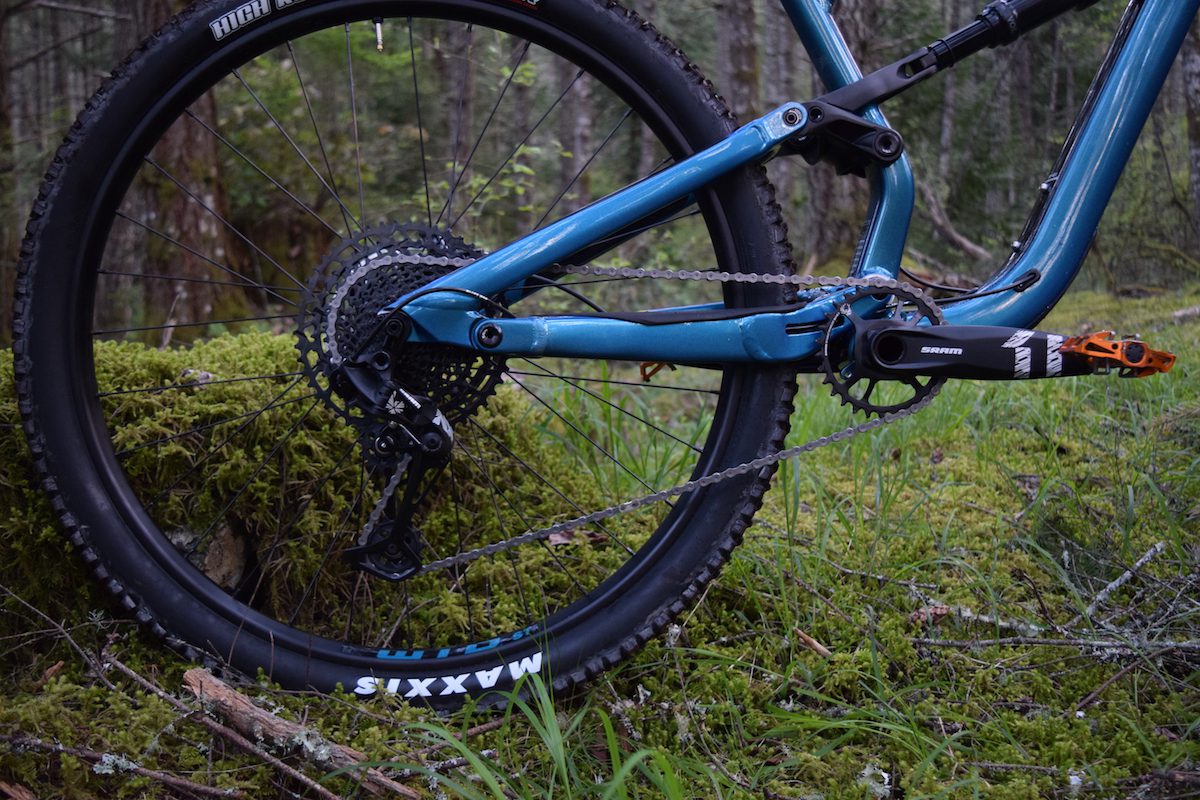 Cannondale has added a mostly SRAM NX Eagle build to the Habit Al 4, with the addition of the upgrade to the X1 crank and 30-tooth chainring. Out back, a full Eagle range 12-speed drivetrain will help you propel the Habit up to whatever trail you want to ride down. Braking duties stay with SRAM, with 180 mm Guide T hydro disc brakes front and rear. A Fabric Scoop saddle sits on a 125 mm TranzX dropper post.

Finally, all the bikes in the line come with a mud guard printed with custom Habit graphics. 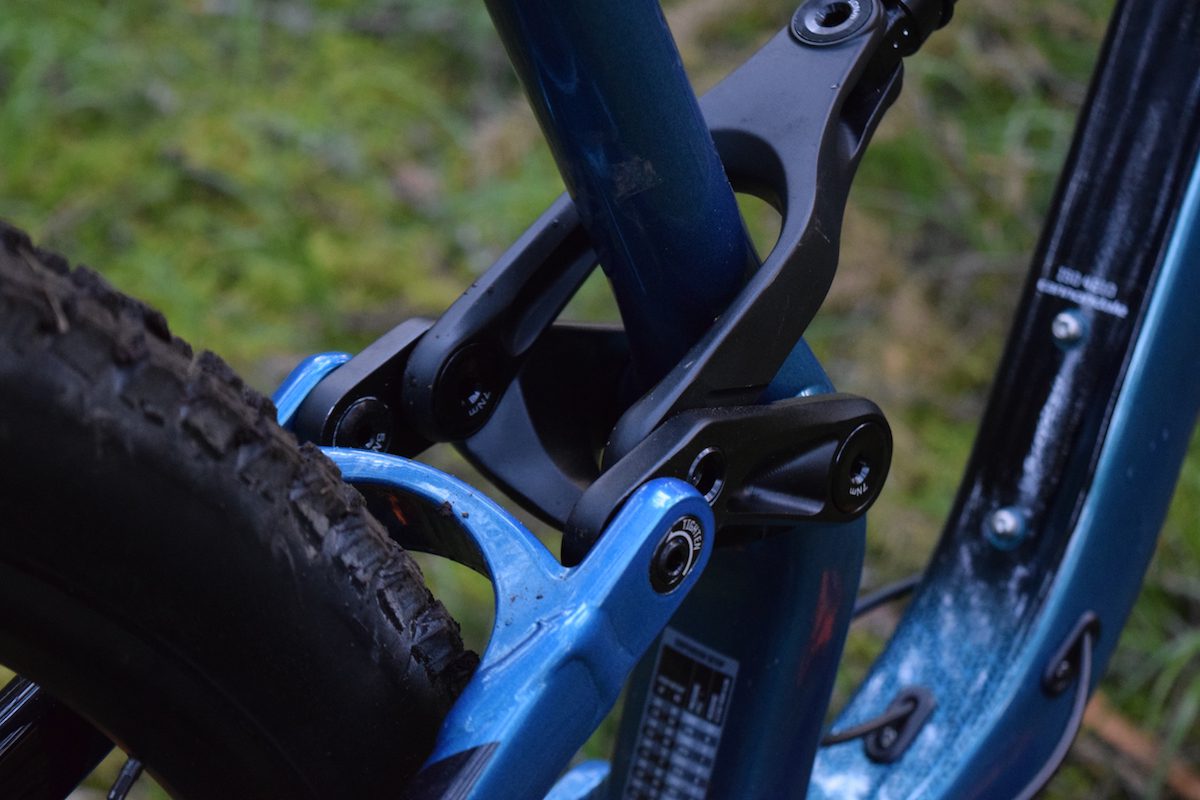 On the trail: Good Habits and Bad

The Habit is designed around a low BB and 435 mm chainstays. This lends the feeling that your sitting in the frame, instead of perched on top of it. The low BB gives an in the bike feeling and makes the Habit Al 4 corner with impressive control. This lends the bike confidence, encouraging you to pop and jump out of corners. The flip-side of that is that it puts the pedals closer to the ground. Riding trails that were at all rocky requires more attention to avoid pedal strikes. This is especially true while climbing with the suspension open.

Setting the Habit’s suspension up properly makes a noticeable difference in the bike performs on the trail. Set the air pressure in the right range, and it feels balanced, playful and poppy. Set it up outside that range and it feels a little harsh, or like it uses  its 130 mm of travel quickly. Part of that impression could be due to expectations set on the bike, some of which come from hiring Josh “Ratboy” Bryceland to launch the Habit. It gives the impression that the bike can, and should be ridden hard. If that’s what you want to do, the Habit AL 4 is happy to play along. It is immediately comfortable getting airborne. If that’s not your style, it’s abundance of traction in corners will be confidence inspiring for riders of all stripes and skills. 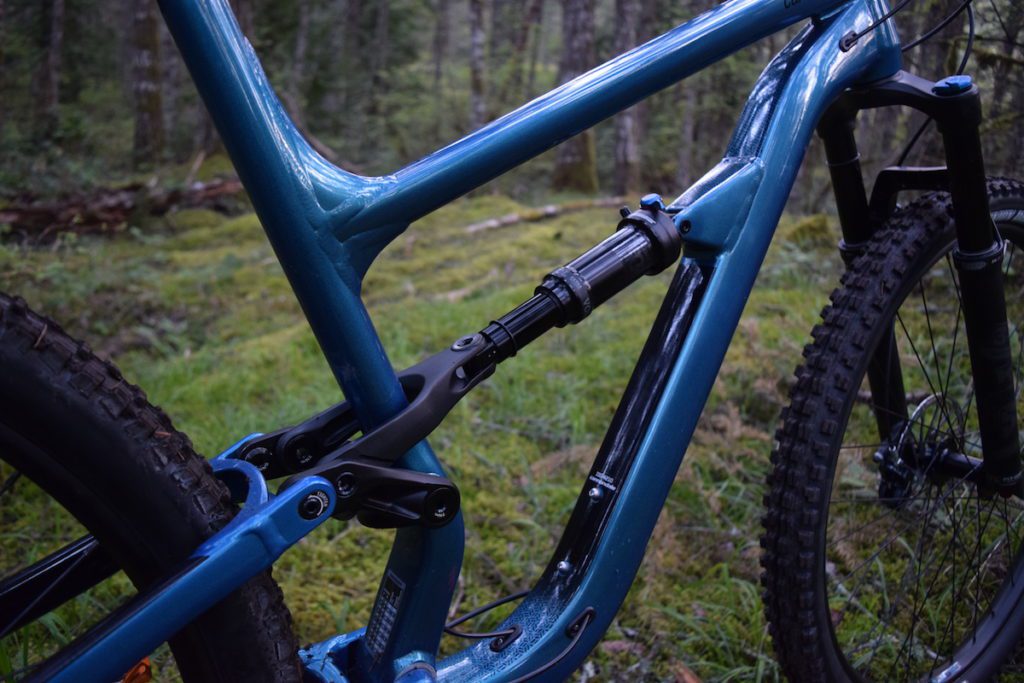 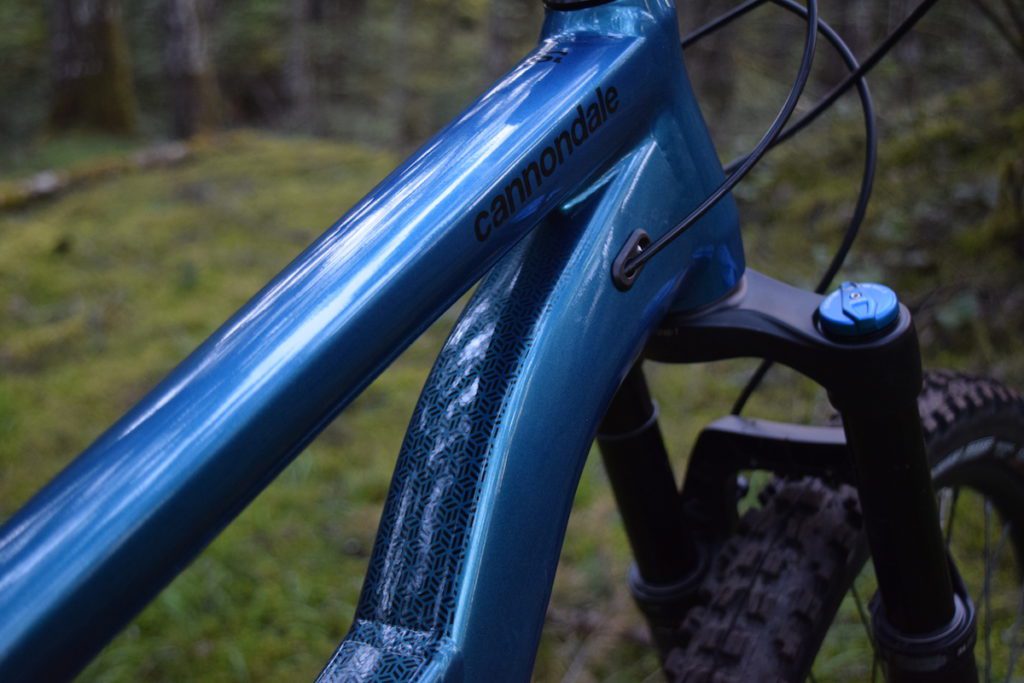 The striking Deep Teal colour is complemented by detailed patterning 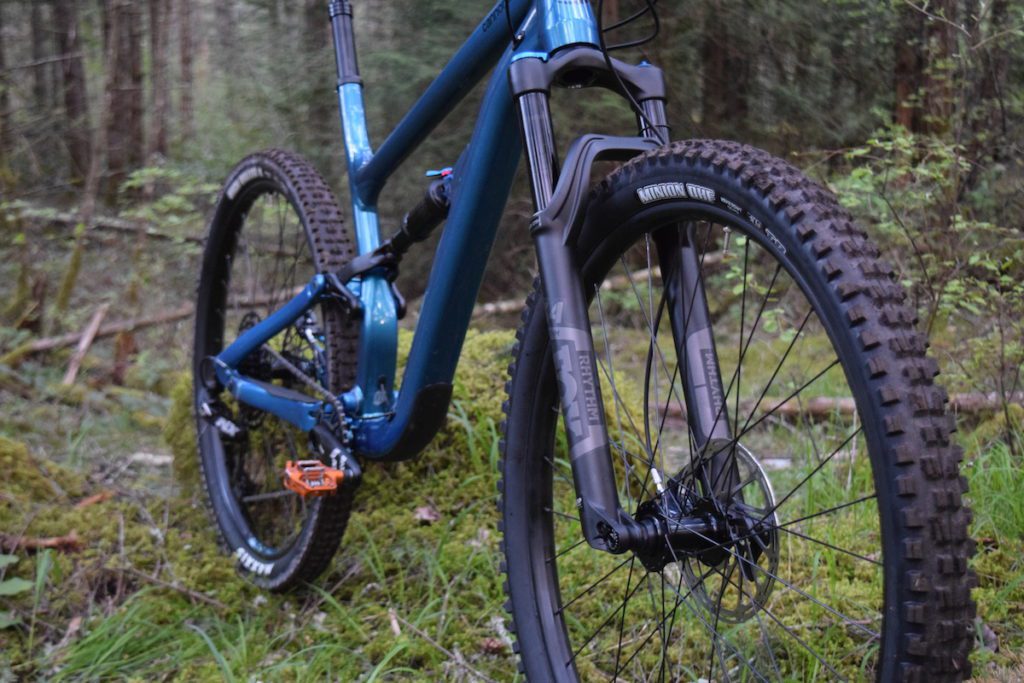 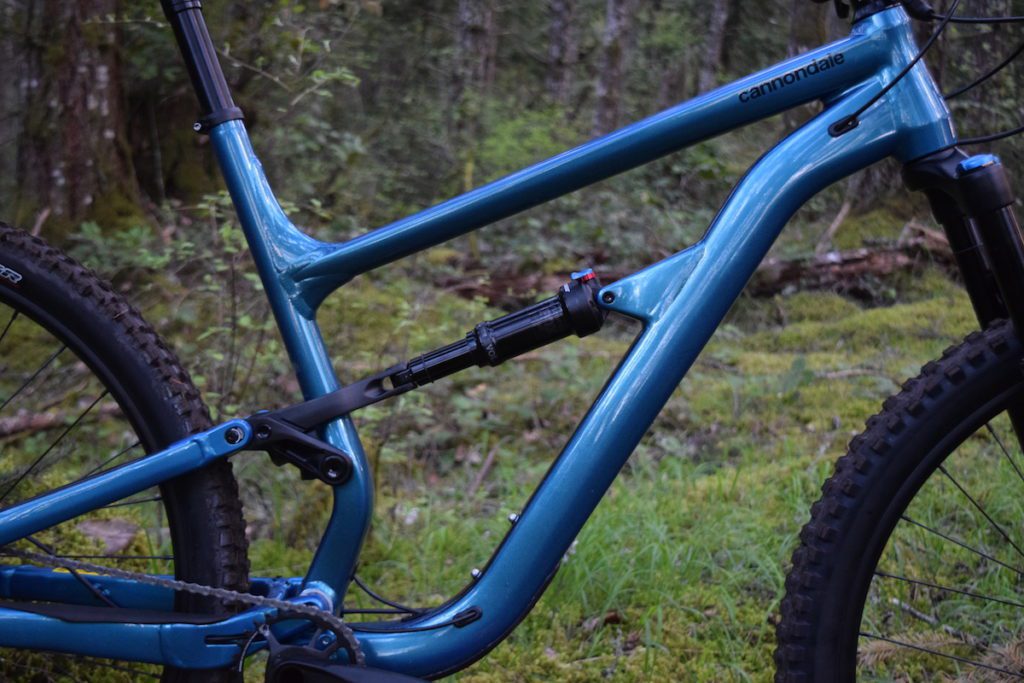 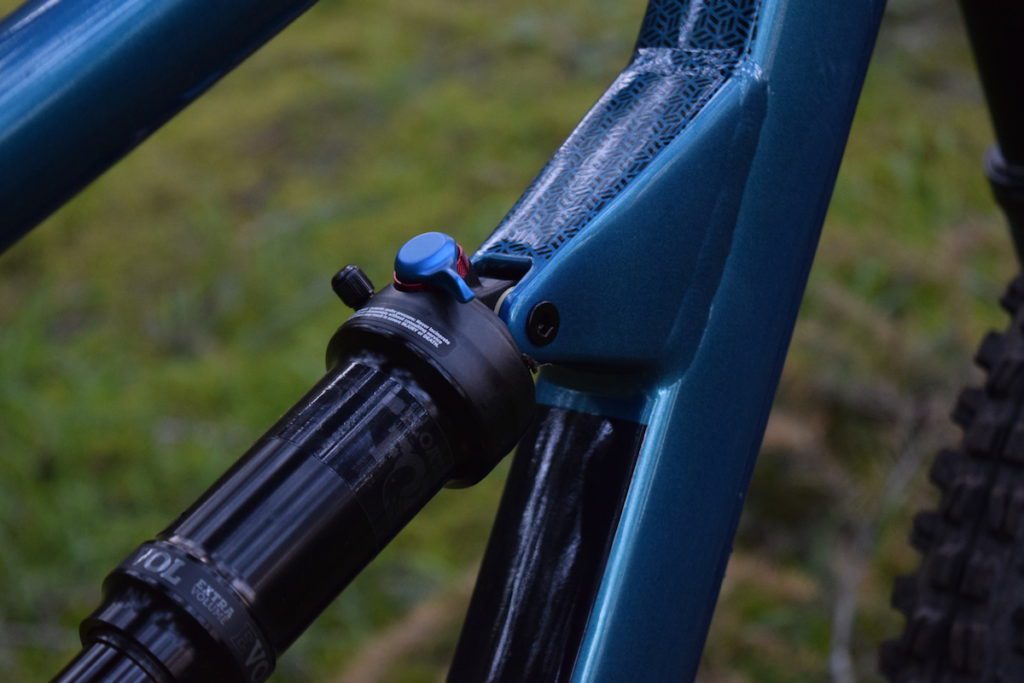 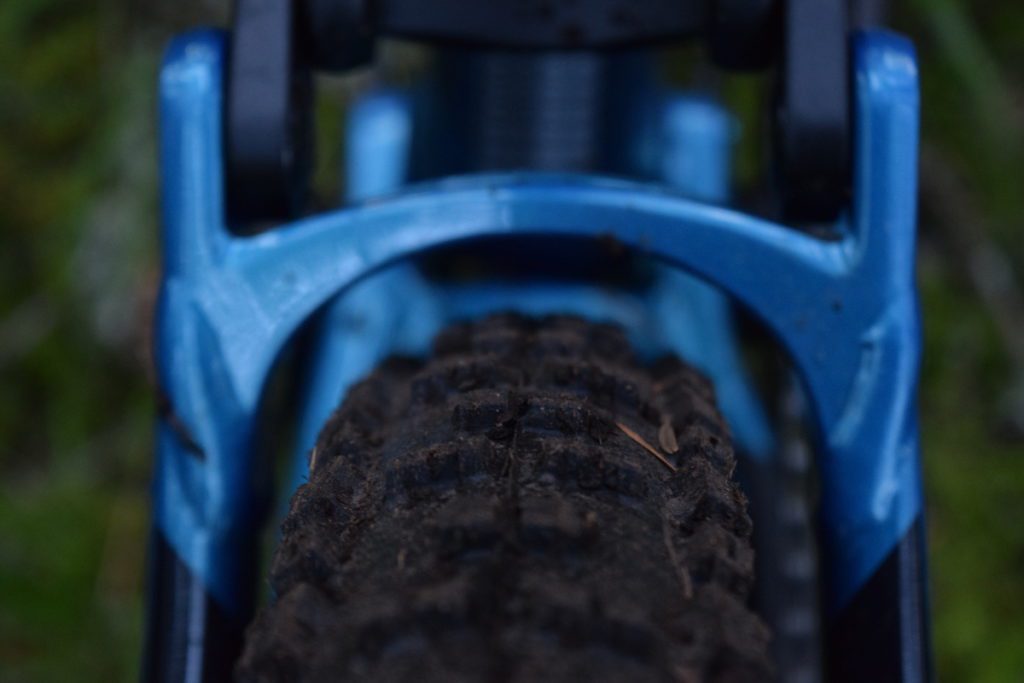 Clearance for sizable tires out back to go with the 2.5" up front, though a 2.3" comes stock 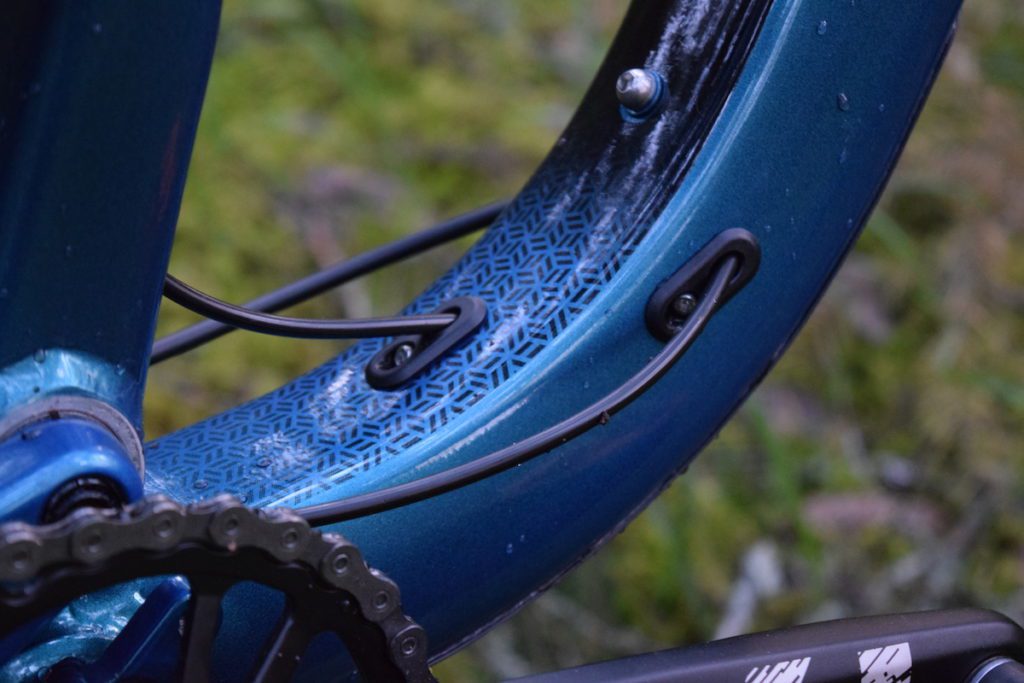 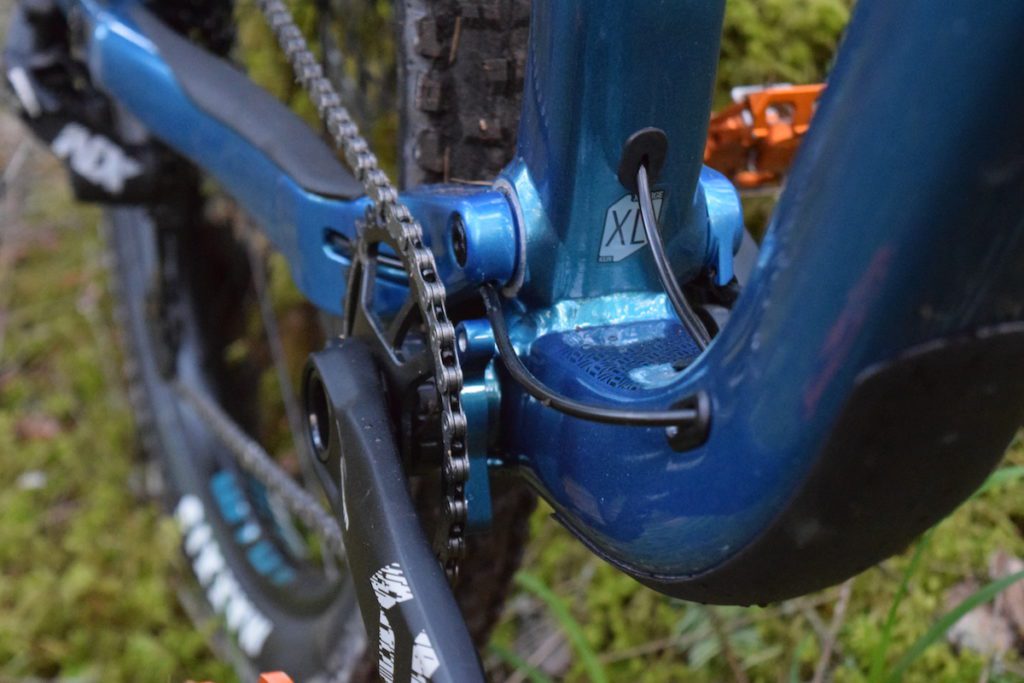 With clever exit / entry points through the bottom bracket area 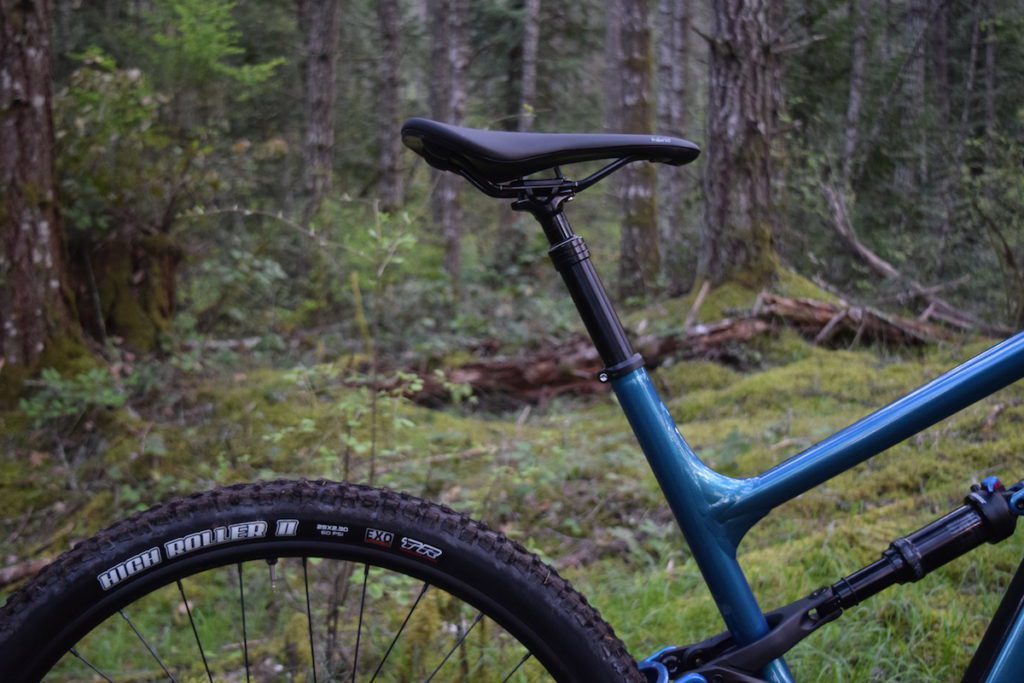 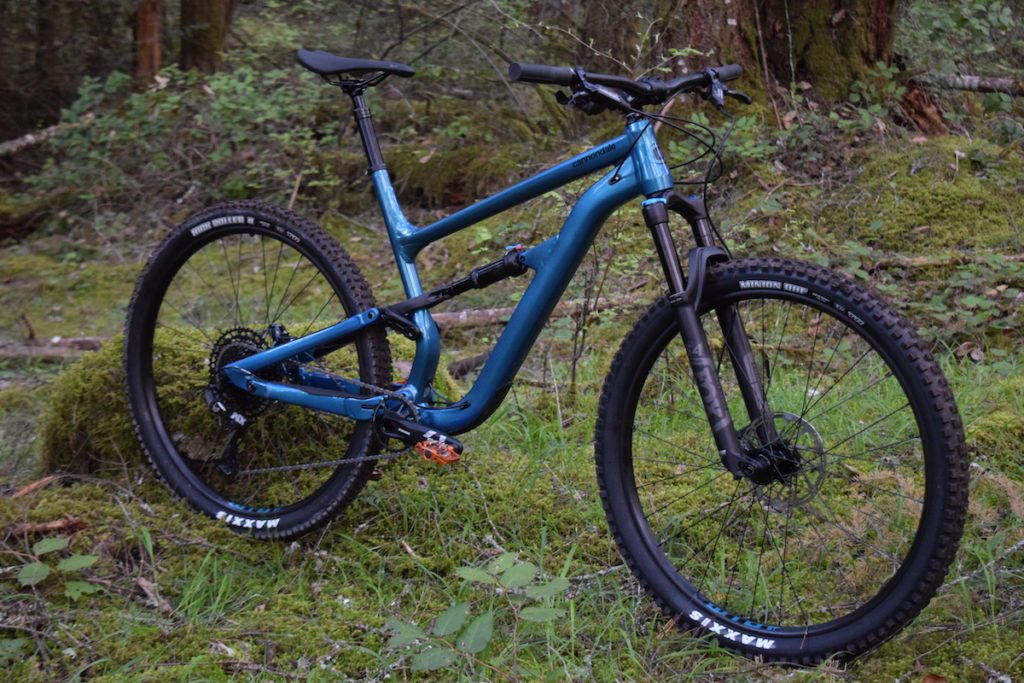 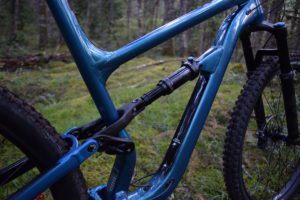 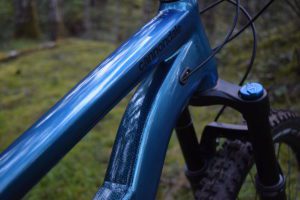 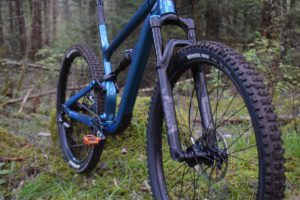 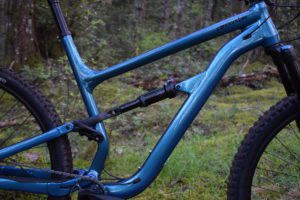 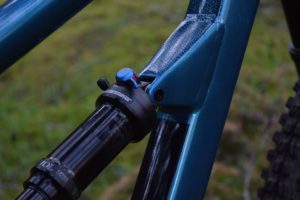 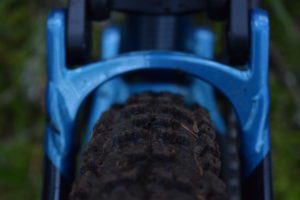 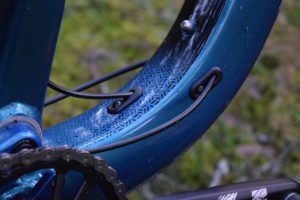 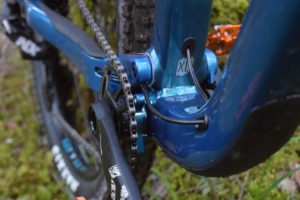 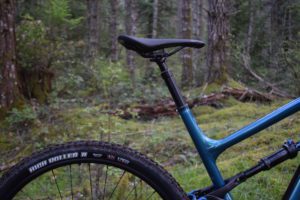 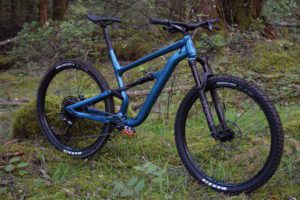 After a positive first impression, I’m looking forward to seeing how much the Habit Al 4 is capable of when pushed really hard. But, even on the first rides, it feels like a bike that will make any ride more fun by adding confidence and control. Part of the balanced feeling could be the Proportional Response suspension. A low BB and meaty 2.5″ WT Maxxis Minion DHF certainly add to the sense of control. 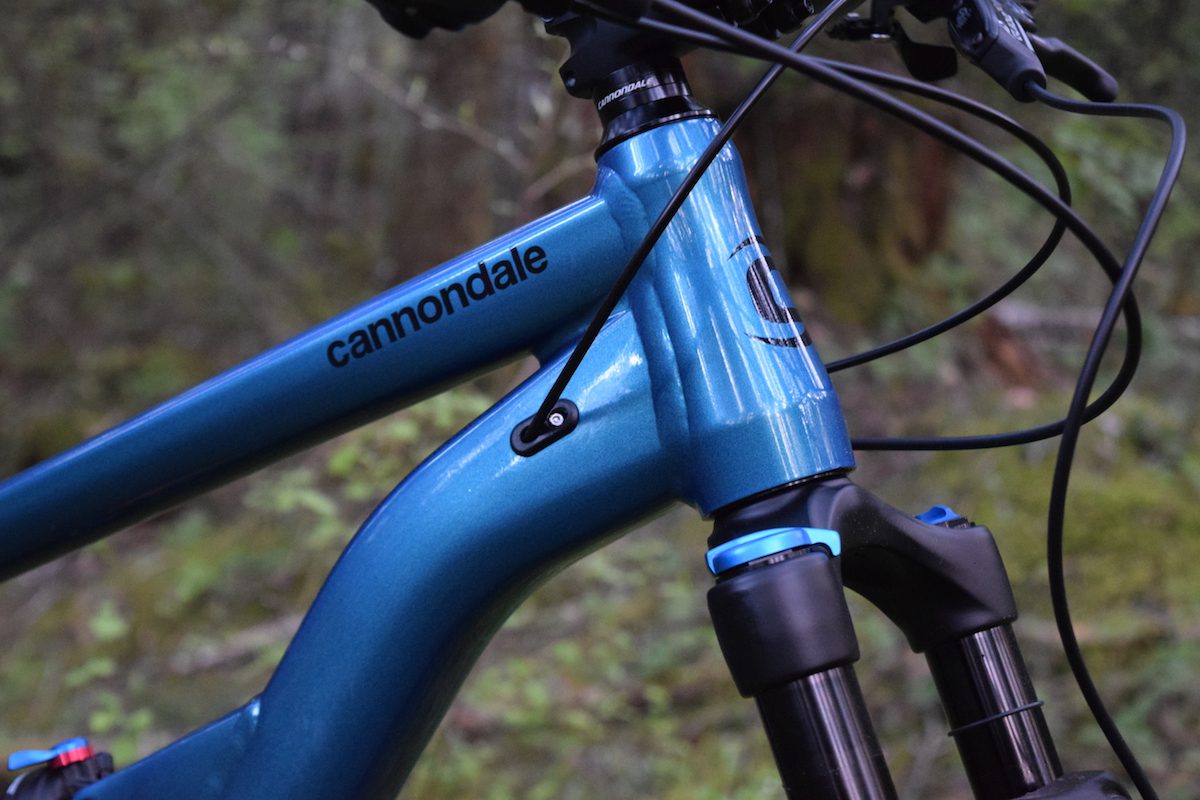 The Cannondale Habit AL 4 retails for $4,200, putting it in the middle of the Habit range. The top-end Habit Carbon 1 leads the line, running all the way to the Habit Al 6, and includes three women’s model bikes. 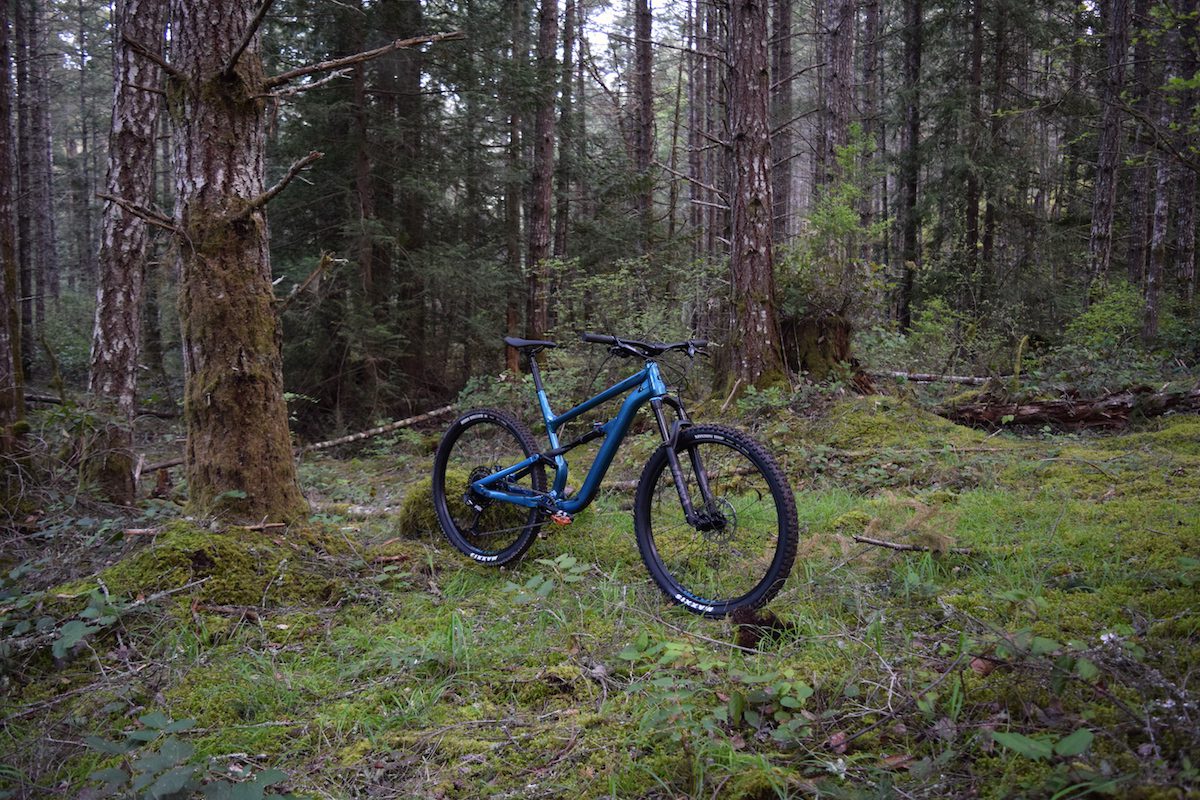