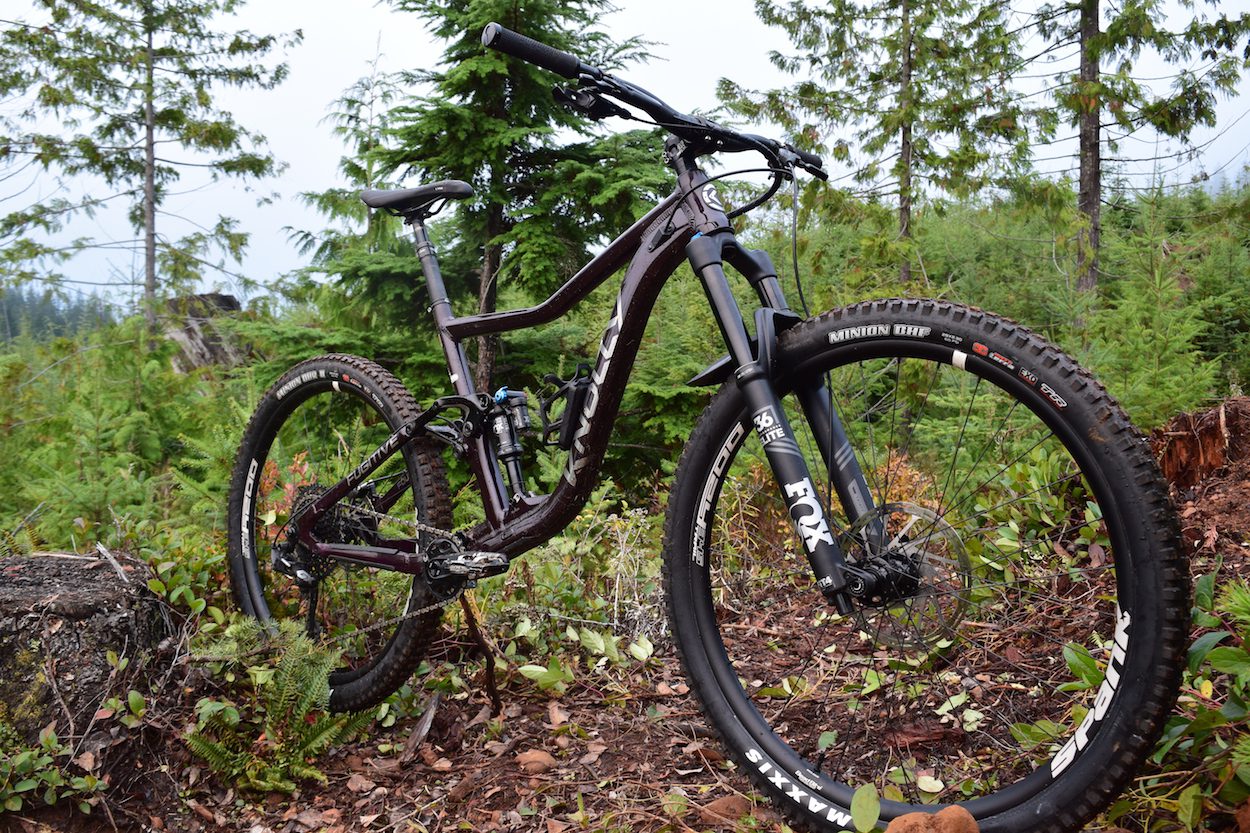 When Knolly announced its new Fugitive line, it was big news. It is not only the Canadian boutique brands first new bike after a long, two year wait, but it’s also the 29″ bike in the Knolly line. 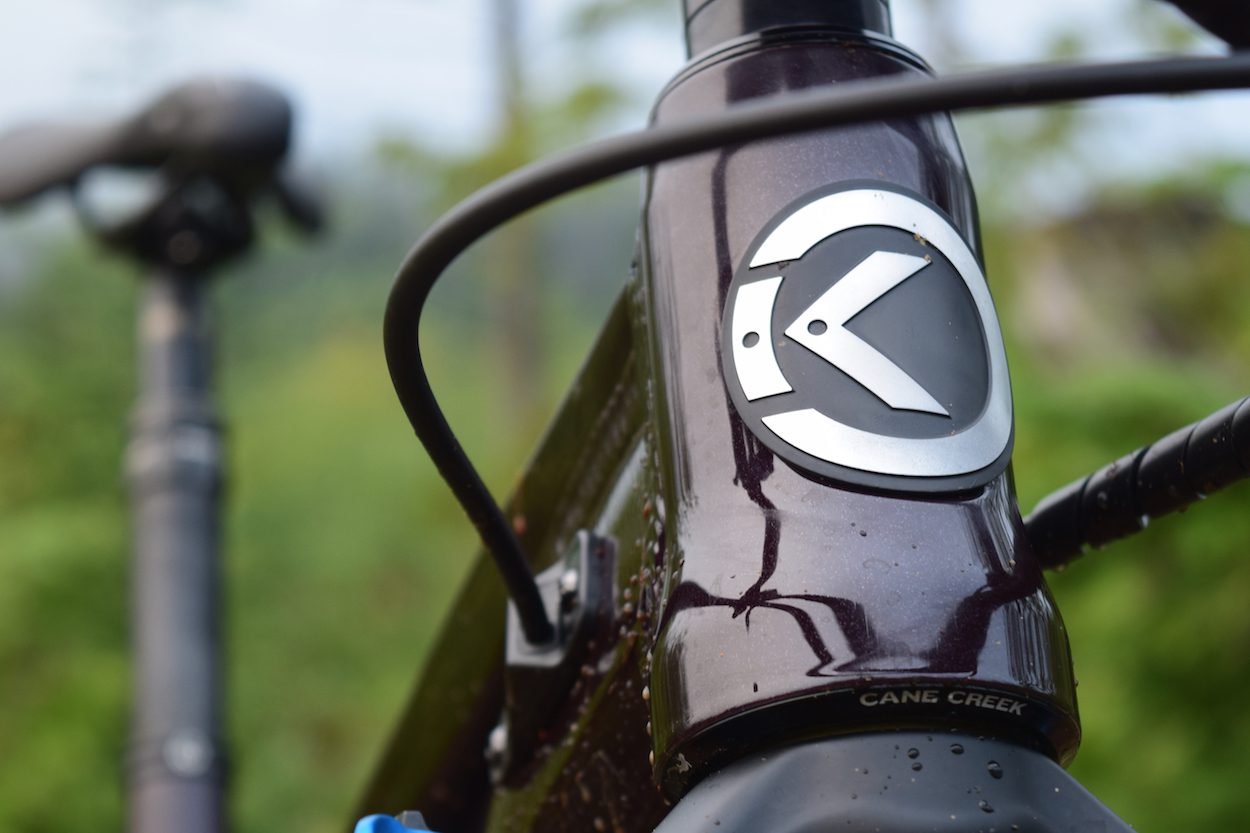 Knolly Fugitive LT – all alloy and all the details

There’s two options for Knolly’s first foray into big wheels, both designed around the same frame. A 120mm travel Fugitive hits more at the “trail / adventure” end of riding, while the 135mm Fugitive LT pushes into “all mountain / enduro” terrain. Like all Knollys, the Fugitive uses the brands own patented Fourby4 suspension design. On both versions, riders can choose between a “slack” and unmarked “neutral” shock position, which changes the frame geometry slightly. Being a Knolly bike, only slack is marked as that’s where they expect most of their customers to gravitate, but the option is there.

Knolly has built a reputation on building high end alloy bikes that are tough enough to survive years of abuse on the roughest B.C. singletrack. After expanding into carbon fibre with the Warden Carbon, the brand is back aluminum to launch the Fugitive. While carbon has become synonymous with “high end,” the intricately shaped and thoroughly engineered Fugitive frame is an easy argument for alloy’s place as high quality frame material.

Looking over the frame, the extra time spent developing the Fugitive shows up in a seemingly endless list of small details. One of the bigger small details is the move to Trail 157 rear hub spacing. Knolly skipped right past Boost spacing straight to the existing hub standard previously used on DH bikes. The wider spacing promises, like Boost 148 did, to create more laterally stiff wheels as the company moves from 27.5″ to 29″ diameter wheels designed for aggressive riding. It also creates space for the Fugitive LT to run the larger tires that have quickly become popular with more aggressive riders. Sizable 29 x 2.6″ rubber will fit cleanly inside the Fugitive frame or, should you choose to go bigger, a there’s room for a full 27.5 x 3.25″ tire in there.

The Fugitive LT frame features fully internally routed cable housing. This includes a removable downtube protector that doubles as a space to secure a Di2 battery for electronic drivetrains. An uninterrupted seat-tube creates room for up to 200mm dropper posts across the entire Fugitive size run, small to XL. The frame uses a 73mm threaded BB shell, with removable ISCG05 chain guide tabs and even the option for 2x drivetrains.

From there on, it’s increasingly small details that make the Fugitive LT stand out. There’s custom titanium fasteners for pivot points, which use bushings developed with Igus. Cable routing is all internal, and cleanly organized. There’s even custom rubber internal routing port grommets that gently squeeze housing to prevent cables from rattling around in the frame. 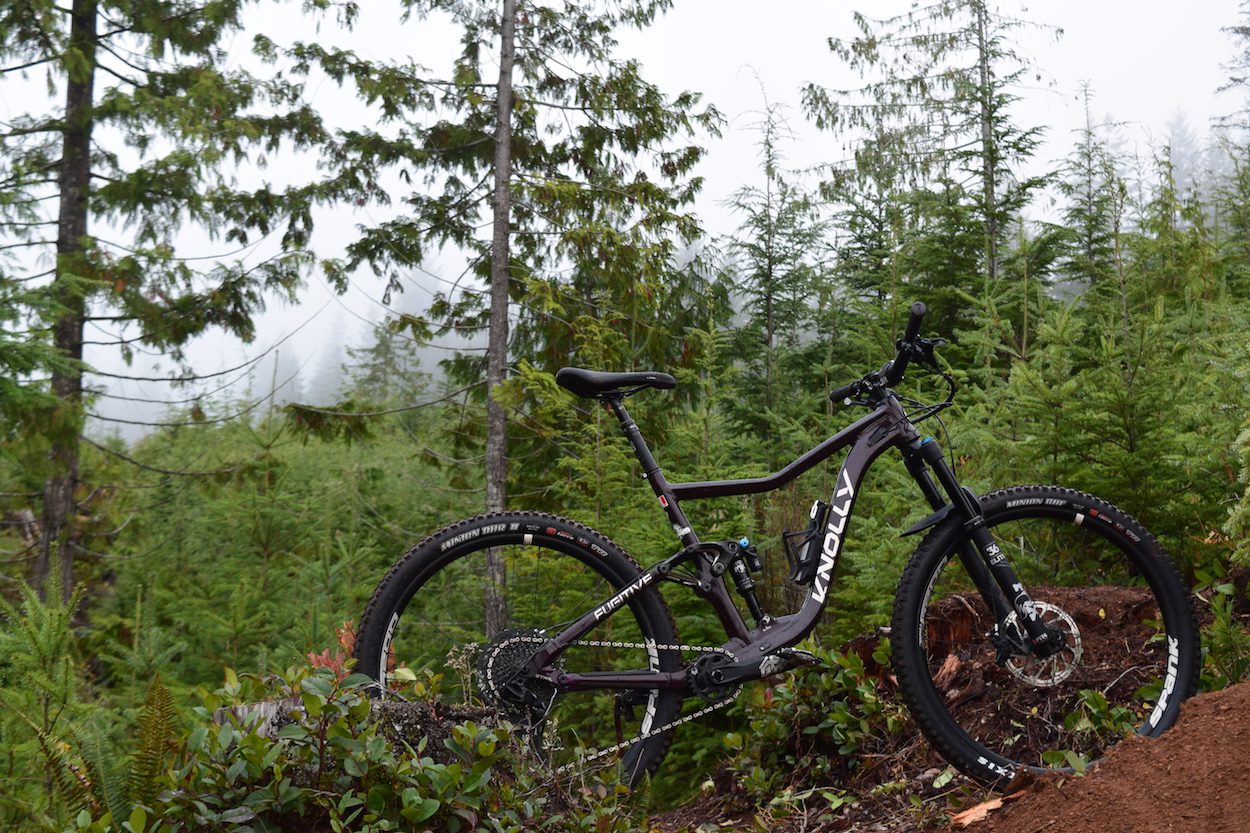 On the trail: Knolly Fugitive LT rides to the hills

My first ride on the Fugitive LT was out on the trails of Cumberland, B.C. The small Vancouver Island with a reputation for its extensive and expanding network of trails was a great testing ground for the mid-travel all-mountain bike. Technical, root and rock strewn climbs test Knolly’s claim to ascend adeptly, while trails like Gravity, Blockhead, Numbskull and the classic DCDH would push the bikes descending chops, and mine.

I headed out into the woods on a Fugitive LT dressed in the black cherry / chrome colour scheme and a Dawn Patrol level build. Knolly knows its customers tend toward run on the obsessive side, with strong opinions when it comes to gear. Rather than picking one shock and forcing riders to make changes to their preferred option, there are several shock options available at the point of purchase. Five different shock options, coil and air, exist for the Fugitive LT – all of which have been checked and tuned by Knolly to make sure they will perform as expected with the bikes kinematics. The build I was riding came with a Fox Float DPX2 Evol Performance Elite, the stock Dawn Patrol option.

While Knolly’s aren’t designed to climb fire roads, the Fugitive’s Fourby4 performed fine as I worked my way up above Cumberland. The bike doesn’t have the snappy jump of a feather-light XC-race bike but, whether standing, spinning, or low-cadence mashing, it does feel like the work you put in is pushing you forward. When I hit technical climbs, the bike stayed impressively smooth, even while putting down power up over obstacles. Knolly is vocal that its suspension is designed to perform best when climbs get technical and, sitting in the mid-travel range, the Fugitive seems set up well to take advantage of that trait.

Of course, Knolly’s reputation wasn’t built on climbing. Known for tough bikes that will survive North Shore abuse day after day, my expectations were set high when I pointed back down. Immediately starting down one of Cumberland’s staple enduro stages, the Fugitive LT felt confident and stable. My first impression is that the new frame, while the first to run on 29″ hoops, is still very much a part of the Knolly family. The big wheels did little to diminish the fun-factor on trail. The bike popped off jumps, accelerated out of corners when you hit them right, and the added rollover of the larger wheels helped carry speed through rough terrain. 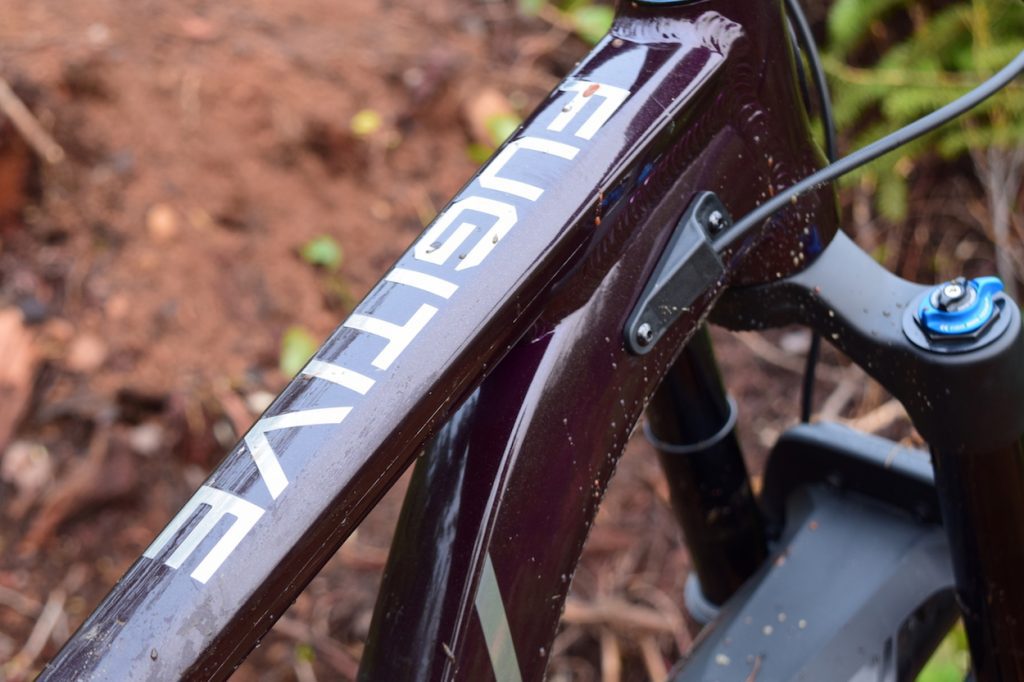 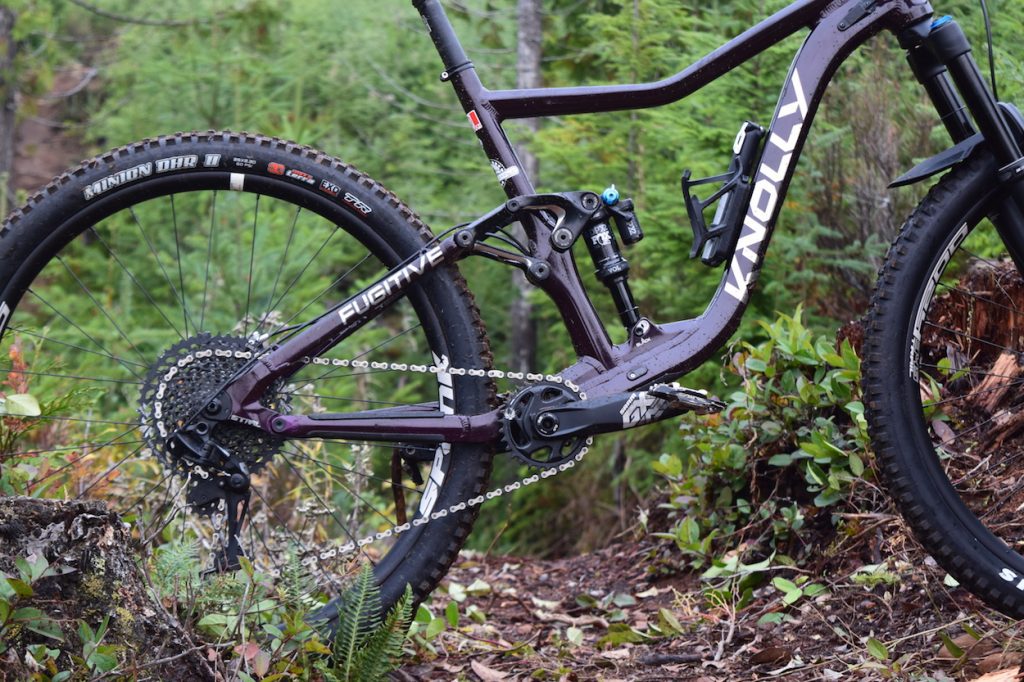 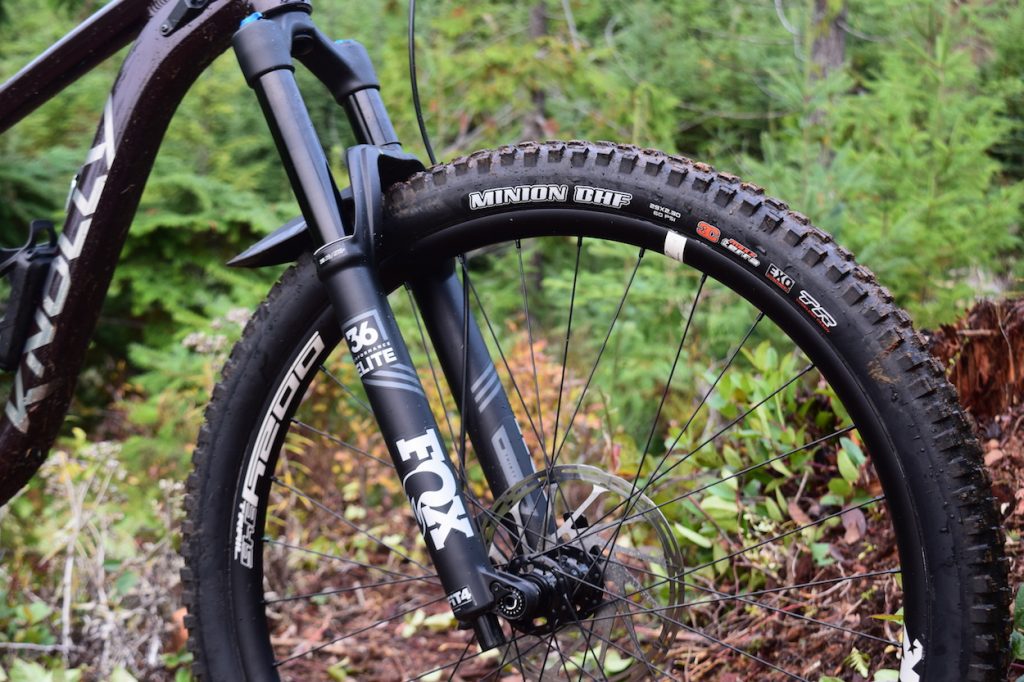 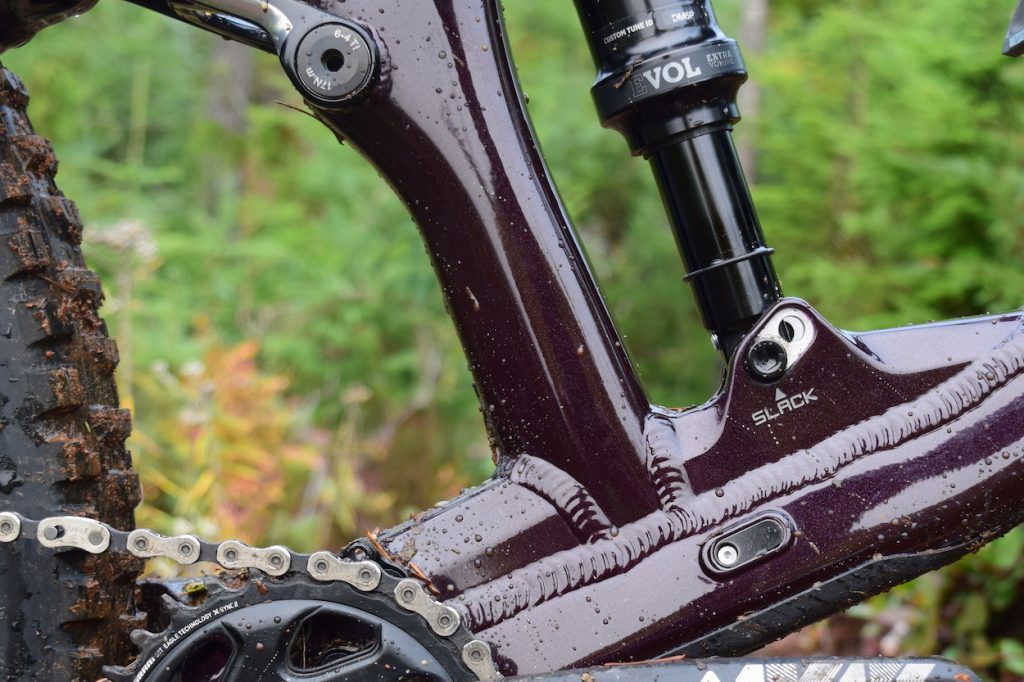 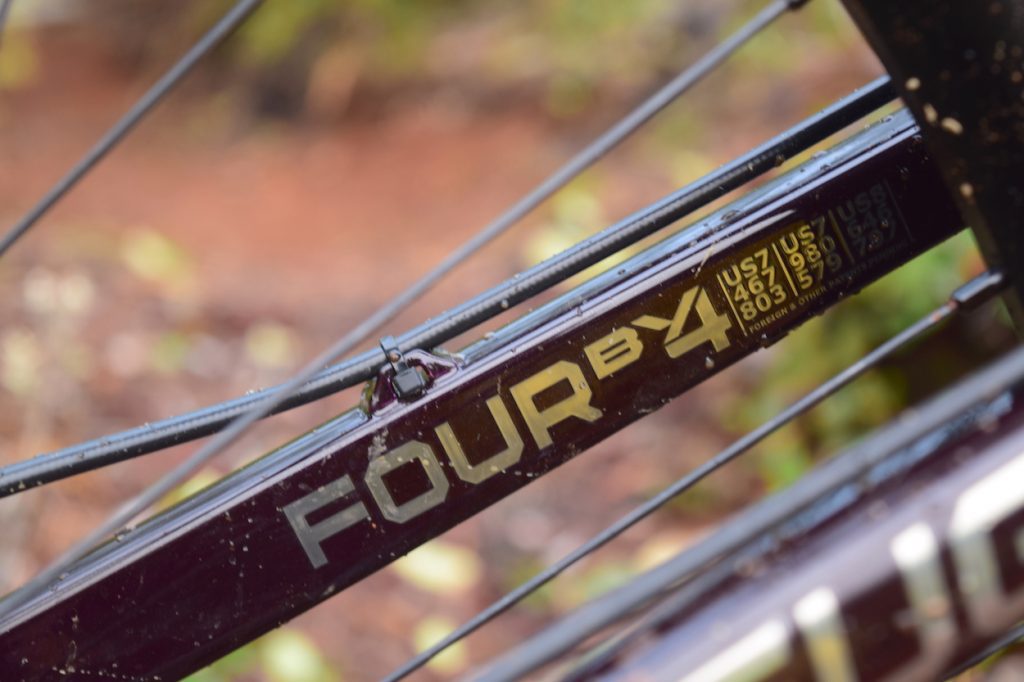 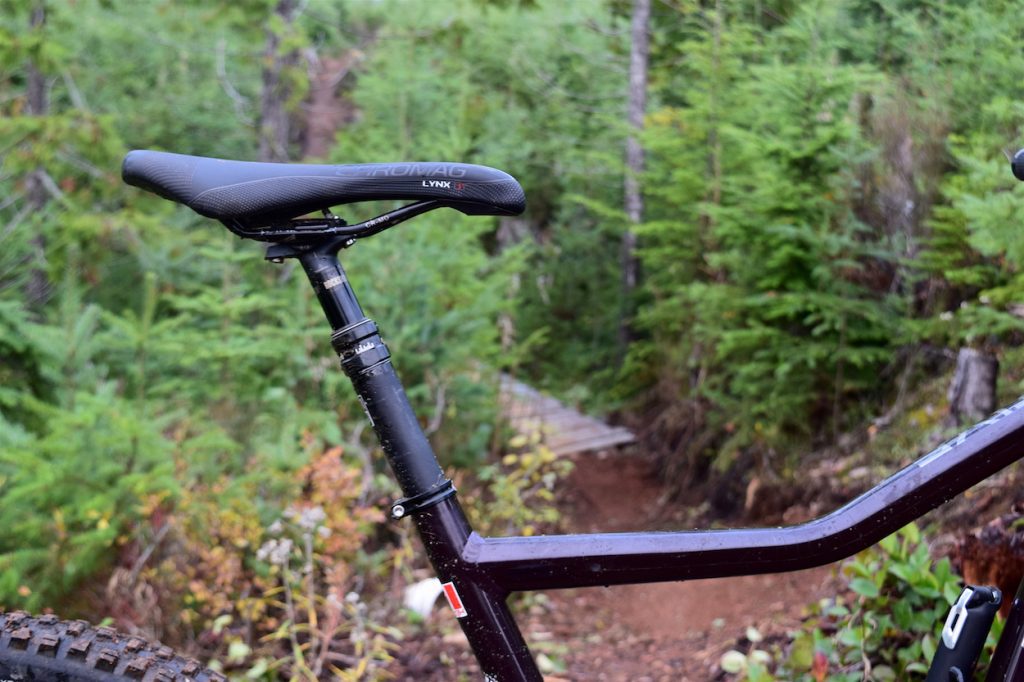 The frame will fit a full 200mm dropper post, even in a size Small 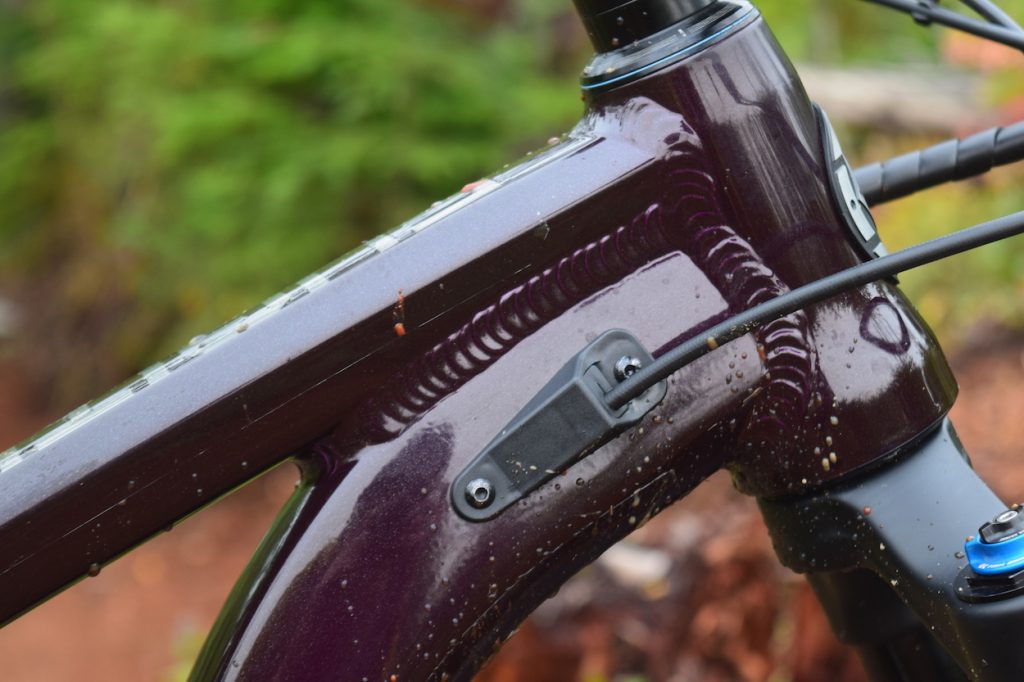 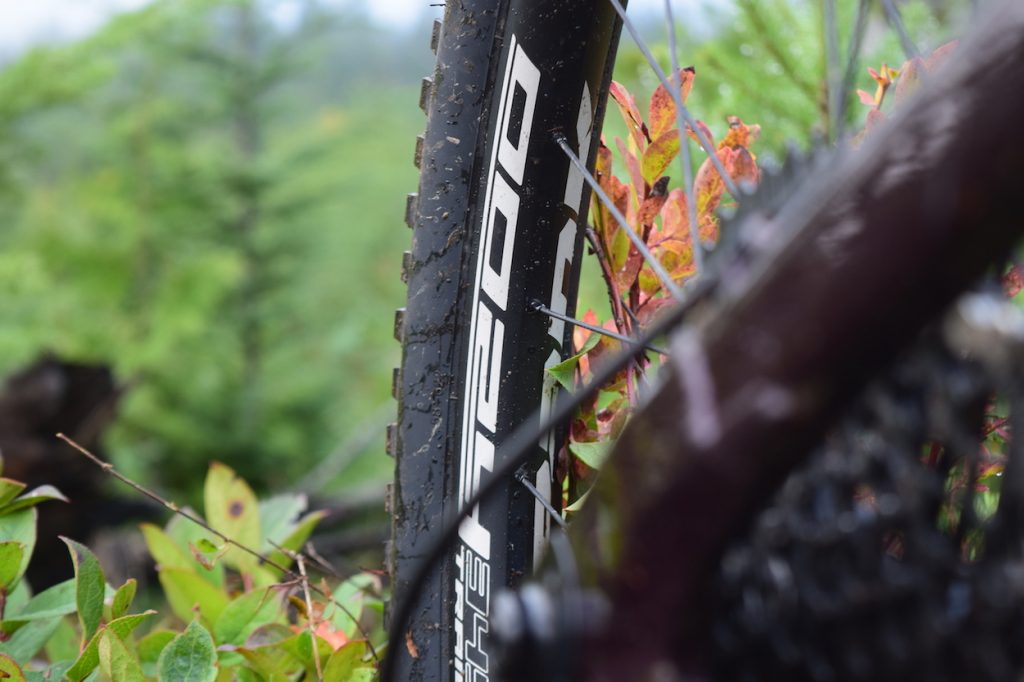 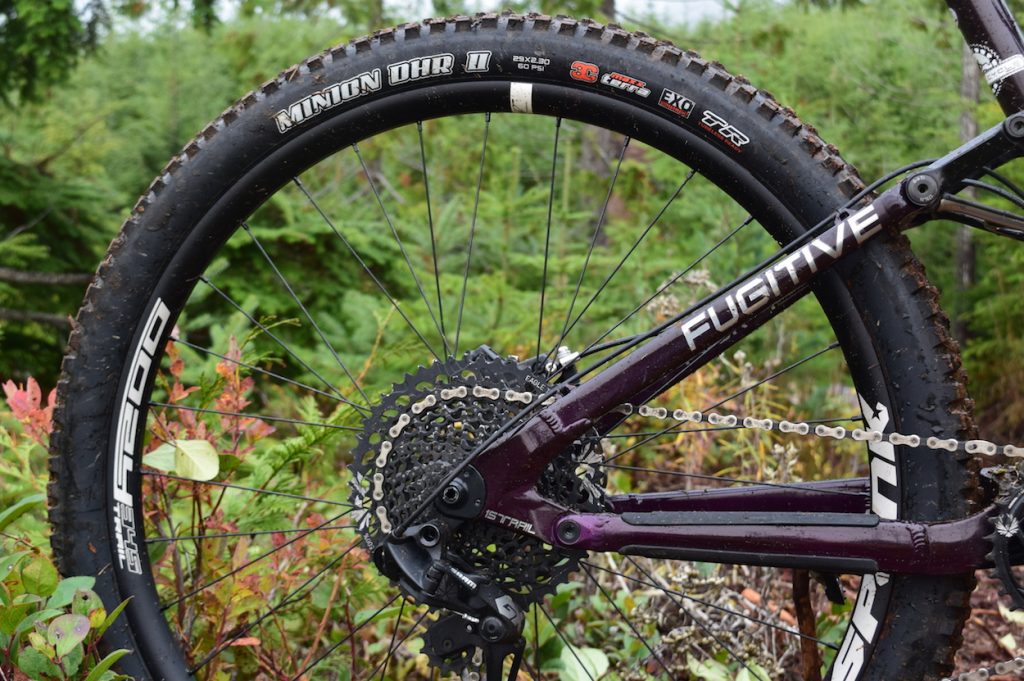 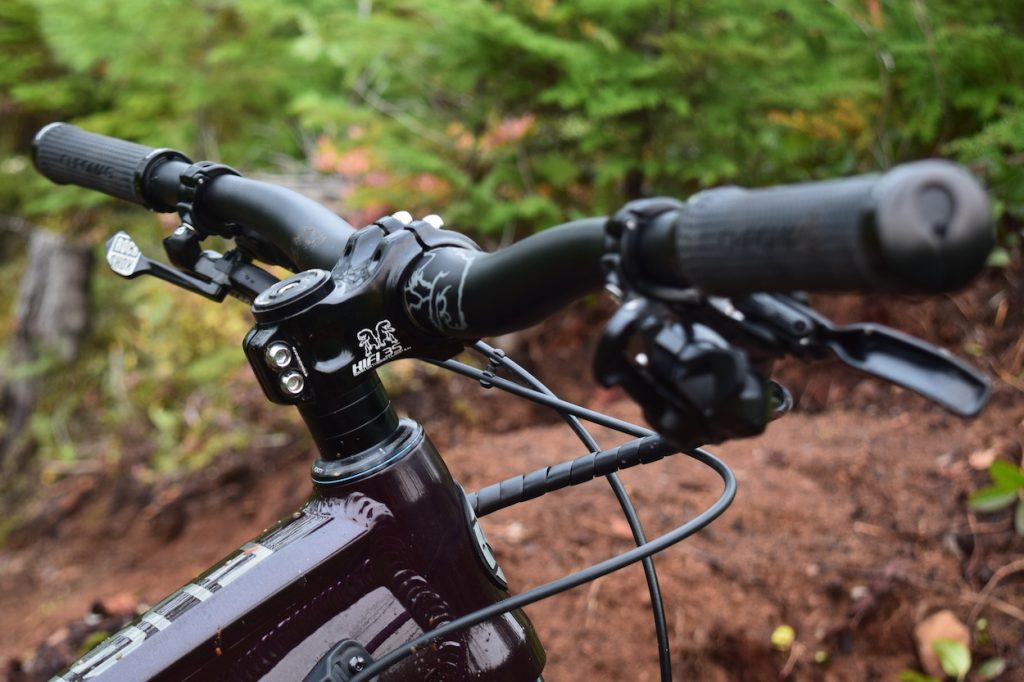 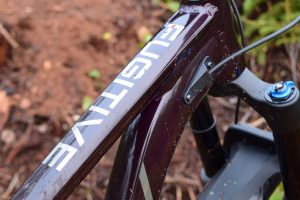 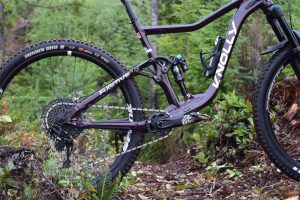 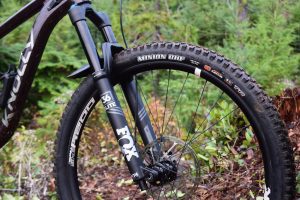 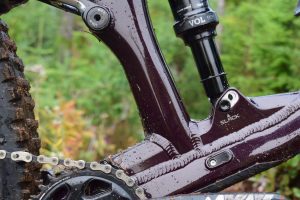 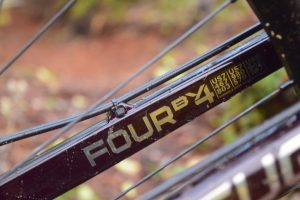 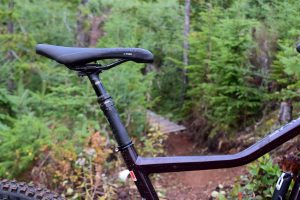 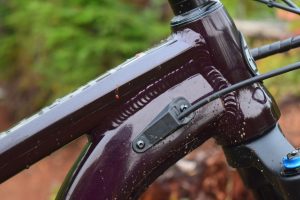 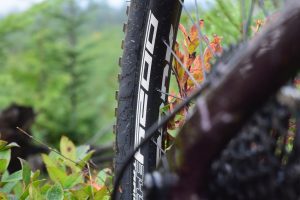 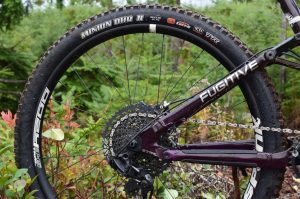 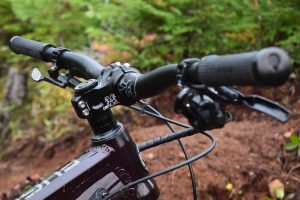 The Fugitive feels like a great bike to pull out for long adventures where you’ll have to pedal for a while to get to your destination, but will still want a very capable bike under you for the way back home. It won’t feel the lightest on extended climbs, but is adept when the going up gets technical. On the way back down, the Fugitive LT quickly felt confident and fast over rough terrain. At 135mm rear and 150mm front travel, it has its limitations descending compared to more long-legged Knolly’s, but the Fugitive LT feels like it will constantly encourage you to find, test and push that limit.

We also had the chance to talk to the man himself, Noel Buckley about the development of the brands first foray into 29″ bikes, and the new Cache gravel/adventure bike. Stay tuned to Canadian Cycling Magazine for more on the man, the brand, and the new titanium adventure bike. 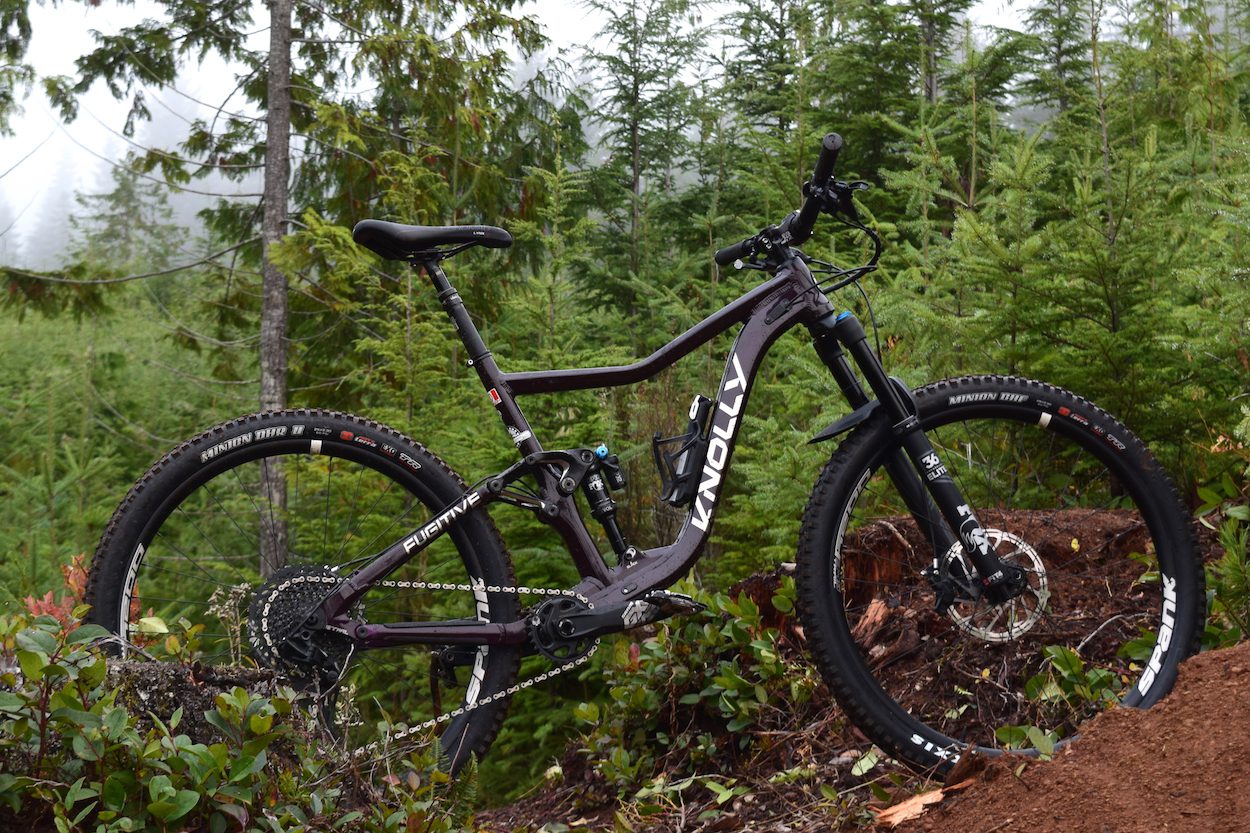