Haley Smith has won a bronze medal in her first Commonwealth Games, after fighting her way back into podium position over an exciting six lap race, finishing behind the British duo of Annie Last and Evie Richards. Following close behind her was fellow Canadian Emily Batty, who had attacked early in the race, but faded over the final laps to finish fourth.”I didn’t have a lot of expectations for a specific performance when I came here,” said Smith, in her first major games appearance. “I struggled this week with believing that I deserved to be here, so my Games experience was about feeling the atmosphere and being confident in myself and my preparation.” The preparation paid off, and Smith is bringing bronze back to Canada. “When I got to the start line, all I wanted to do was race and it worked out.” 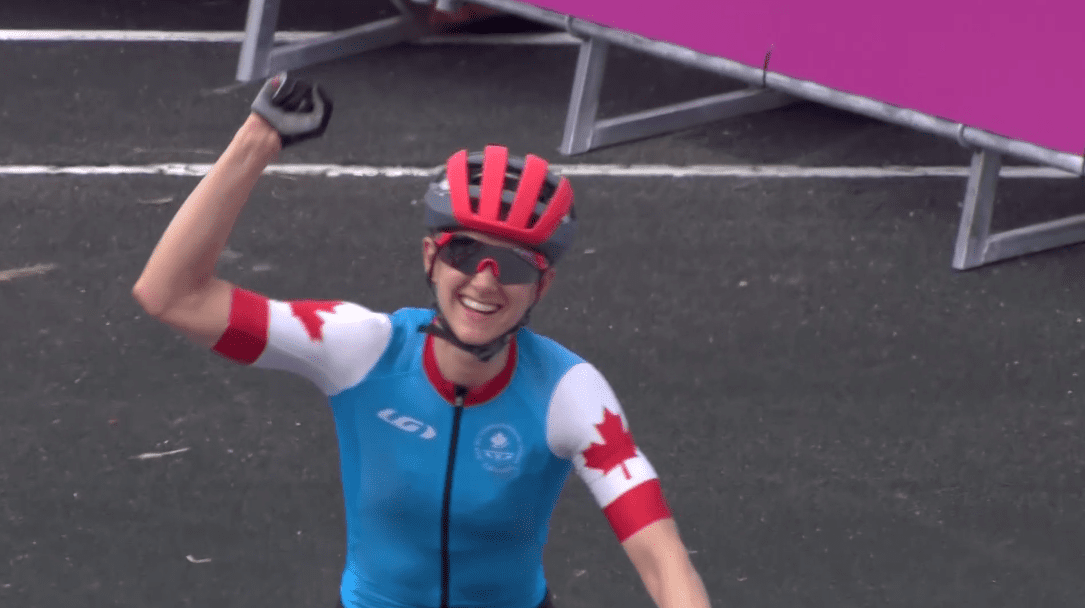 How the race unfolded

The course started from the center of the velodrome area at Nerang Mountain Bike course, before turning up a climbing fire road section. Canada’s Haley Smith jumped out to take the holeshot off the start, but it was England’s Annie Last and Evie Richards that pulled into the leading positions heading up the fire road section towards the singletrack. Isla Short of Scotland was behind in third, with Emily Batty and Haley Smith following right behind.

After a short, open climb the course drove straight up into the first challenging rocky climb on the course. Last rode cleanly through, while Richards dabbed at the top, creating a gap between Last and the Canadians. Richards, already over the top of the section, was able to chase back on immediately, while the rest of the field was left behind. “The first climb has three technical up sections and I think everybody had problems at least once during the race,” said Smith, “but unfortunately mine was on the first lap.” Now sitting seventh, the young Canadian was forced to change her race plan on the fly. “From that point on, I was just chasing. I kept my head down and kept at it, and it played out.”

At the halfway point of the opening lap, Last and Richards had already opened up a 14 second gap to Short in third, with Batty and then Smith following behind. Richards, though, wasn’t content to sit in and follow her more senior teammate, and attacked Last through the Crocodile Corners section of the track. A small gap did open, but Last, who just finished the Absa Cape Epic mountain bike stage race in South Africa, looked calm in second position.

At the end of the opening lap, the pair were 26 seconds ahead of Short, 34 up on Batty, and Rebecca McConnell, buoyed on by the home crowd, had pushed up to the front of a small group that also contained Smith and South Africa’s Mariska Strauss.

Half a lap later, Last was back on Richards wheel, and content to sit there, while Batty had caught up to Short’s early pace, and taken the lead. Positions up front remained unchanged at the end of  lap 2, while behind, Smith was back up to fifth, 1:05 back, Strauss had faded to 1:17 back, and McConnell, who was visibly struggling with the pace, had dropped back to 1:26 behind.

There was no time for rest though, as Last moved in front of Richards entering the first rocky, steep climb looking for a clear line through the challenging section of trail. Short had the same idea and attacked Batty up the fire road climb to go into the steep section ahead.

Richards held close to Last’s wheel through a fast downhill section but started to show signs that she was feeling the pace, losing touch with Last through the Judgement climb, another jagged rocky section that would cause racers problems all day. Emily Batty used the same section to her advantage, taking the inside A Line to pass Isla Short to re-take third position on course and quickly opening up a small gap to the Scottish rider. The pair was losing time on the leaders though, and now faced one minute eight second deficit to the front of the race at the mid-lap time check.

At the end of lap 3, the halfway point of the six lap race, Last led Richards by 12 seconds. Batty had lost another handful of seconds to sit at 1:12, and Smith had passed Short to take fourth spot at 1:23 behind the lead.

Sensing that the race was hers to take, Last kept pouring on the pressure, adding 15 seconds to her lead over Richards in the next half lap. Batty was chasing hard, but her gap to Richards in second wasn’t budging, holding steady at an even one minute.

The dynamic race continued to shift, with Richards regaining a handful of second on Last, but plenty action going on behind. Haley Smith had caught up to Batty between the checkpoints, but the pair were still losing time to Richards in second. After a strong start, Short continued to lose touch with the front end of the race, fading to 2 minutes 19 seconds back.

With two laps remaining, the heat and the hot pace were starting to wear on the racers. Batty was forced to put a foot down on the first steep, rocky climb, allowing Smith to open a small gap. Richards was showing her own signs of struggling, having to dismount and run up the same Judgement climb section where she had first lost contact with Last. Smith rode the section clean, while Batty struggled again in the same place as Richards.

At the end of lap 5, going into the final lap, Last was holding a 52 second gap over Richards who, though she was looking tired, was holding strong in second. Haley Smith had opened up nearly 30 seconds advantage over the 2014 Commonwealth Games silver medallist, Emily Batty, while Isla short was still holding on to fifth, a further 40 seconds behind.

There was still a lap of racing remaining, and with high temperatures and a technical course, anything could happen. Smith showed signs that the effort was taking its toll, stepping down on the first rocky climb and again briefly on the Judgement climb. It wasn’t enough for Batty to gain ground and Smith still had 30 seconds passing through the final checkpoint, a short distance from the finish.

Richards crossed the line comfortably in first while an ecstatic Richards came onto the velodrome finish straight celebrating. Smith looked like she was enjoying her final moments on course to the fullest, doubling and manualling rollers through the fast final descent, before crossing the finish with a big smile and fist pump for the camera, having claimed the bronze medal in her first Commonwealth Games appearance.

“This is a very different event [from world championships]; this is a major Games,” Smith said of successfully adapting to the new competition environment. “There are some top international performers here, and I didn’t really know what to expect of myself, and I don’t know I can compare it to a world championships. But I’m really happy, and this is something I will have for the rest of my life. I feel very proud and humbled, and fulfilled.”

Emily Batty crossed the line shortly after, giving Canada 3rd and 4th place behind the dominant English duo, and Scotland’s Isla Short followed behind in 5th. Rebecca McConnell had recovered enough to take 6th for the home crowd ahead of South Africa’s Mariska Strauss in 7th. Namibia’s Michelle Vorster crossed the line 8th, looking very happy with her position inside the top-10. 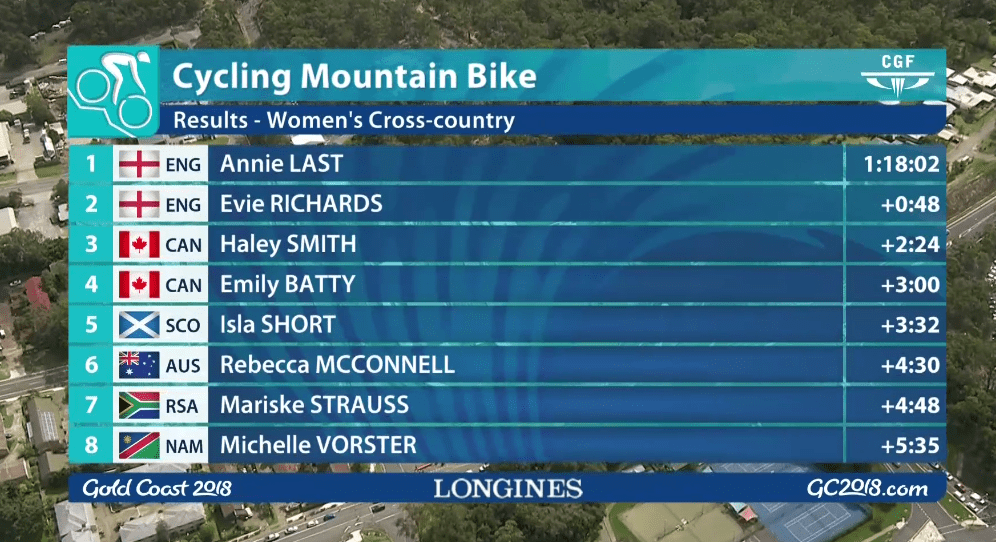