After watching Mathieu van der Poel race Short Track XCC in Albstadt and Nove Mesto in 2021, then seeing his staggering World Cup-winning power data from those races, my first thought was “Holy crap, that’s impressive.” My second thought, partially inspired by the Garmin Rally pedals I was testing at the time, was “I should try that.”

So I did. Here’s what happened (hint: it wasn’t pretty).

Now, to be clear, I have no illusion that I could ever match any pro cyclist’s power numbers or race effort, never mind van der Poel’s 1,360-watt sprints. No, I was more curious how it would feel to race a short track XCC race. To see what that kind of effort would feel like to attempt, not just watch on a screen from the comfort of my couch. I’ve done XCO events before. And even attempted the short-lived XC Eliminator format once. But never an XCC.

I knew it would hurt. It is basically just 20 minutes of sprinting. But I thought it would be at least sort of alright. It’s still only 20 minutes, right? So, a couple of weeks after the 2021 World Cup, I went out and tried.

Mathieu van der Poel are obviously very different people. He trains full-time to race and has done so since he was young. I ride bikes and occasionally race them entirely for fun. At one point I did “train,” but that was years ago. I do have one thing in common with MvdP, though. A couple actually.

First, the bike. Canyon sponsors the Dutch star’s Alpecin-Fenix race team. I happened to be testing a decked out Lux CF SLX 9 LTD. A few minor sponsor differences aside, the CF SLX 9 LTD test bike in my living room and the one MvdP races are the same.

It’s not just bikes, either. At 1.89 metres (just over 6″) and 75 kg – according to Wikipedia – van der Poel towers over most pro cyclists. Not just because he’s usually standing a step higher than them on a podium. I’m a few inches taller, at 6″4 and, uh, a few kg heavier.

So, a few “minor” body composition differences aside, and 10+ years of aging, we’re roughly the same size. 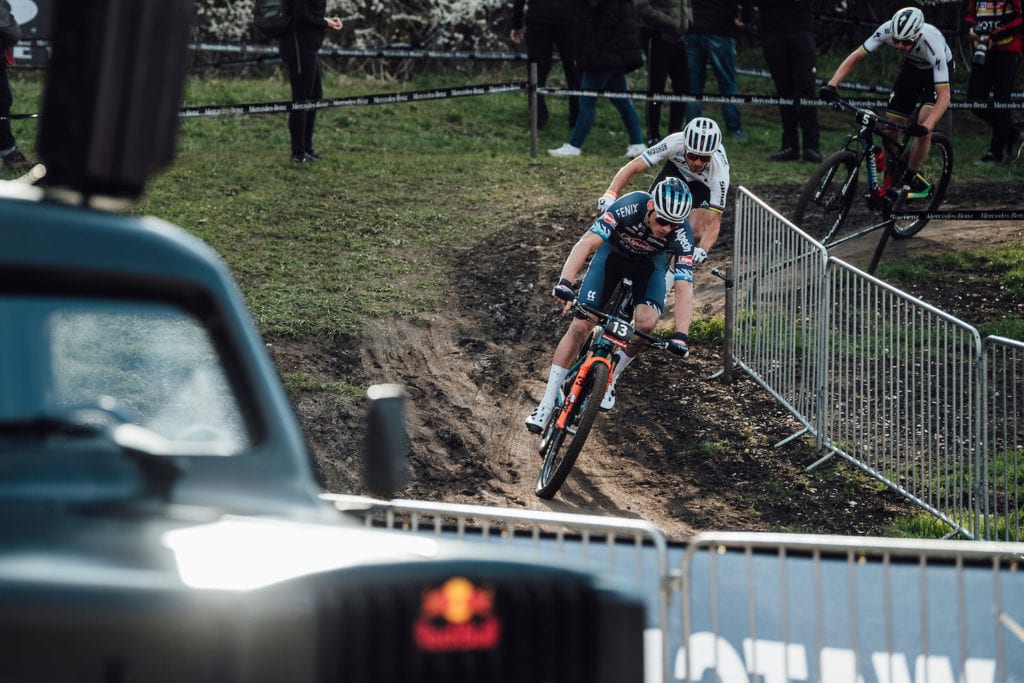 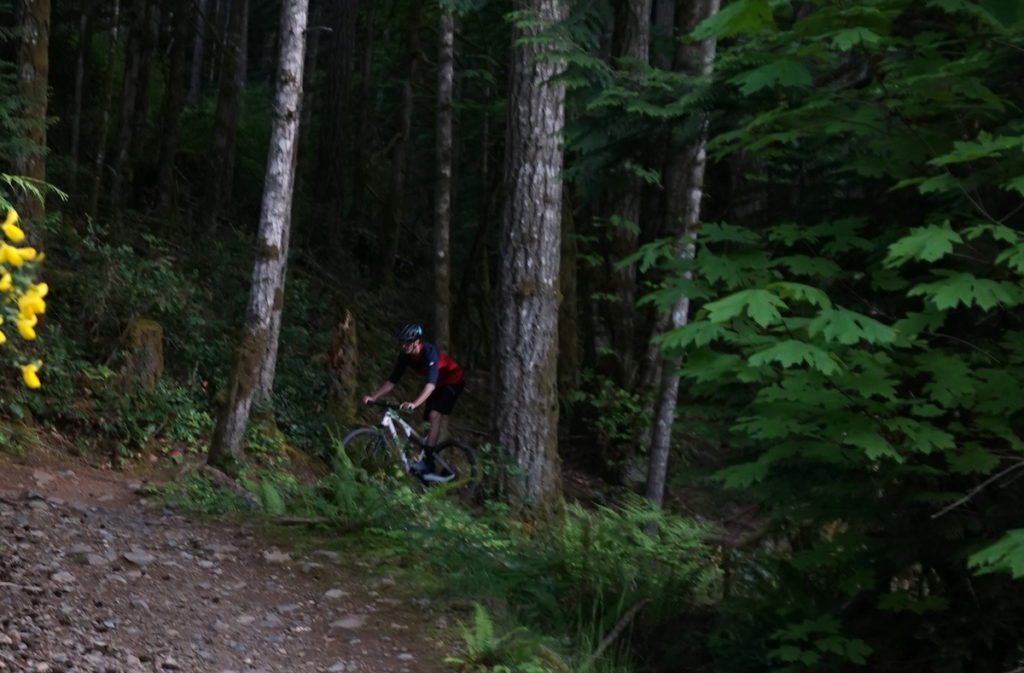 Me, alone in the woods at home 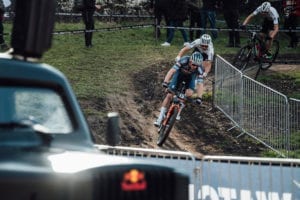 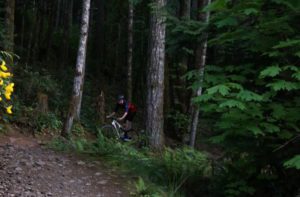 World Cup at home: The plan versus the result

As mentioned, there’s no way I’m matching van der Poel watt-for-watt. Instead, the plan is to mimic the effort. When he sprints at 1,200 watts? I sprint as hard as I can. He powers up a climb averaging 800 watts? I go really hard. He pulls a sick whip at 40 km/h in Nove Mesto’s jumps? I … I try to make it down the hill safely.

World Cup XCC courses are generally between 1 and 1.5-km in length, per lap, adding up to 7-9km over 20 minutes. That usually squeezes around 200m of elevation gain total. My home lap, using parts of the Bear Mountain Canada Cup course in Victoria, B.C. was 1.2km, adding up to 5.7km and 200m elevation over 19 minutes.

If you don’t remember last year’s Albstadt XCC, it was a phenomenal race and a truly impressive effort from the Dutch rider. We broke down the stats in detail then, but here are a few quick numbers. Van der Poel averaged 27.5 km/h, maxing out at 49 km/h. He averaged 423 watts for just over 20 minutes, with 23-separate surges over 1,000 watts (10 of which were over 1,200 watts). On the last lap, he surged over 1,000 watts four separate times, maxing out at 1,314 watts. 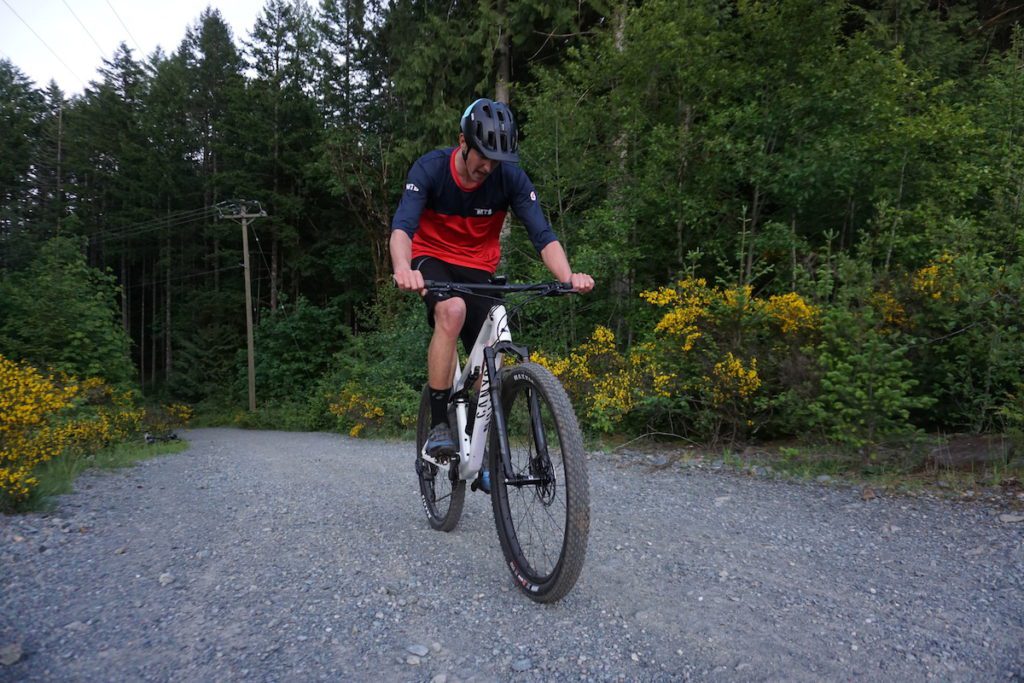 On the move on lap 2, but already hurting 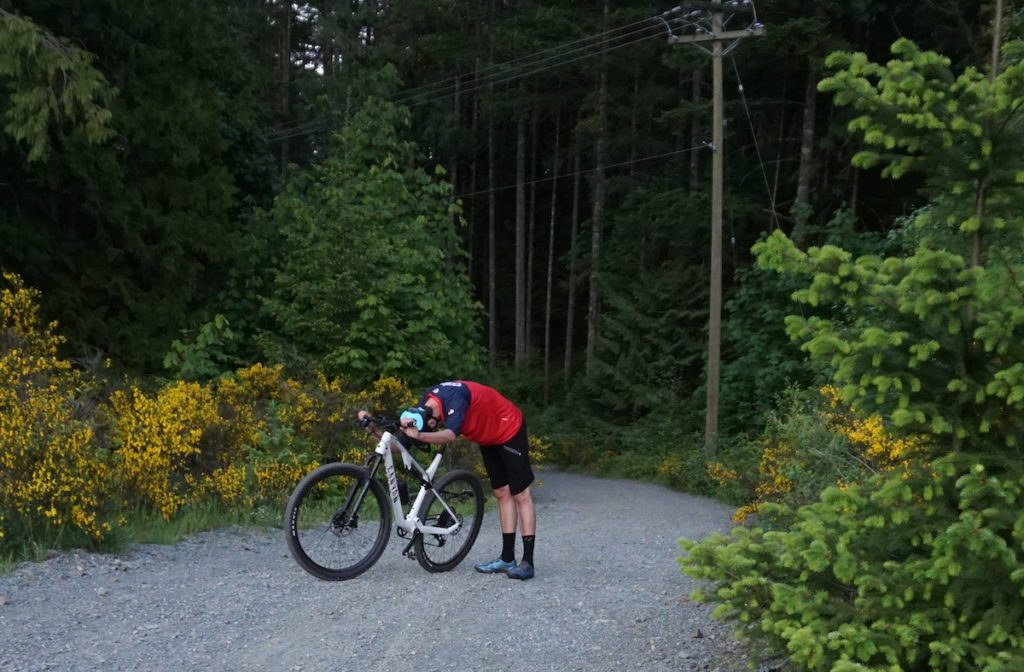 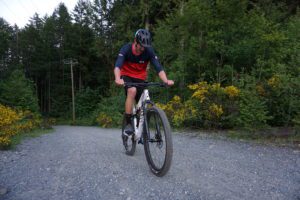 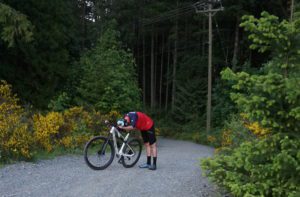 Numbers: me at home

Van der Poel started fast, with two laps at 400+ watts, before settling in for four laps around 360 watts. Again, with 1,000-watt sprints twice per lap.

Attempting to mimic this, I hit just under 300 watts for my first of 4.5 laps, getting just over 1,000 watts twice and over 800 watts twice. So far, so good. Not world class by any stretch, but I was happy.

Lap 2 and 3 get dramatically worse (approximately laps 3-6 for MvdP). Where van der Poel rested, with occasional sprints, I attempted to do the same. Instead of feeling like I was recovering, though, the repeated efforts dug a deeper and deeper hole. My average watts dropped significantly, by 20 per cent, but the effort felt the same and my heart rate skyrocketed. But I was still alive and still trying to sprint.

On lap 4 (his final two laps), our paths diverge dramatically. MvdP hits 400, then 498 average watts over the final two laps of his race in Albstadt. This includes his max effort of 1,300+ watts. My race goes in the opposite direction. I can no longer stand to attempt sprints, my watts and speed drop further.

I had one final 0.5 lap to get to a respectable 19 minutes. At this point, van der Poel is full gas. I was out of gas. Through some miracle, I managed to pull my average watts back up for this 1-minute mini-lap but there was no race-winning sprint. My max watts “sprint” as I limped across the line was over 400 watts less than my sprint off the line. I was toast.

The first 1.5 laps actually felt alright. I was sprinting, enjoying the downhills and having fun. It hurt, but in a way that made me feel alive. That gave me a false sense of confidence that would come back to bite me hard about five minutes into the “race.”

By the end of the second lap all hope was fading fast. The descents no longer felt like recovery. In fact, it barely felt like I’d stopped pedalling before I was right back on the next hill. My breathing never slowed beyond a rapid wheeze. The descent was no longer fun and just barely functional.

The last lap and a half felt like an hour. I couldn’t stand to sprint. All bike handling skills had vanished to the point where I was dabbing on simple corners and even the short, easy descents felt borderline dangerous. Any sense that I was riding fast was long gone. In fact, it took every ounce of effort just to keep moving. 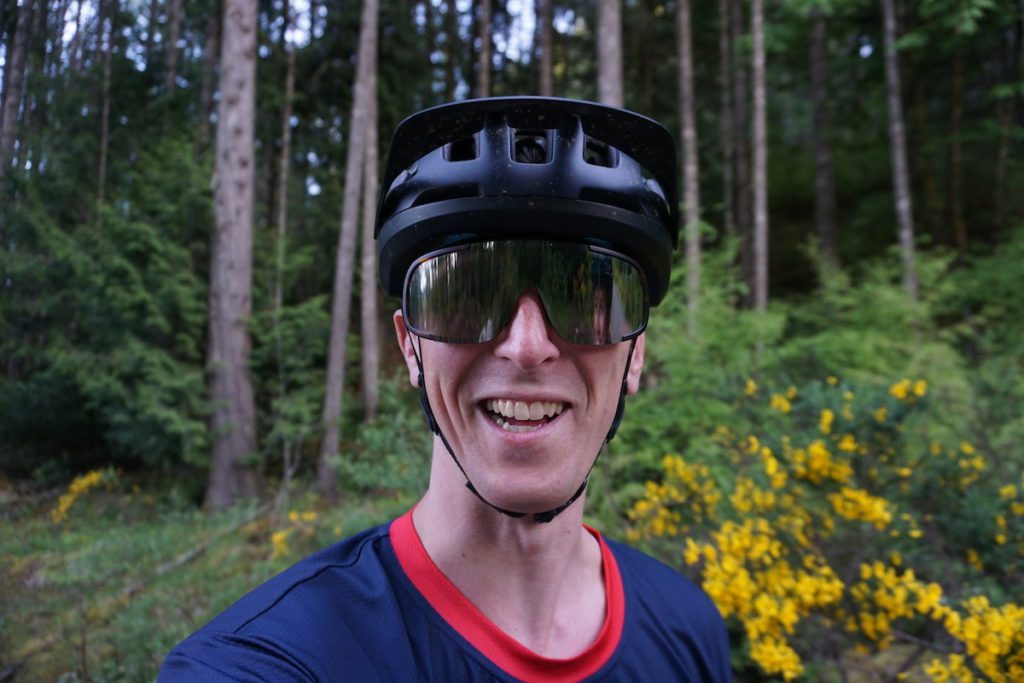 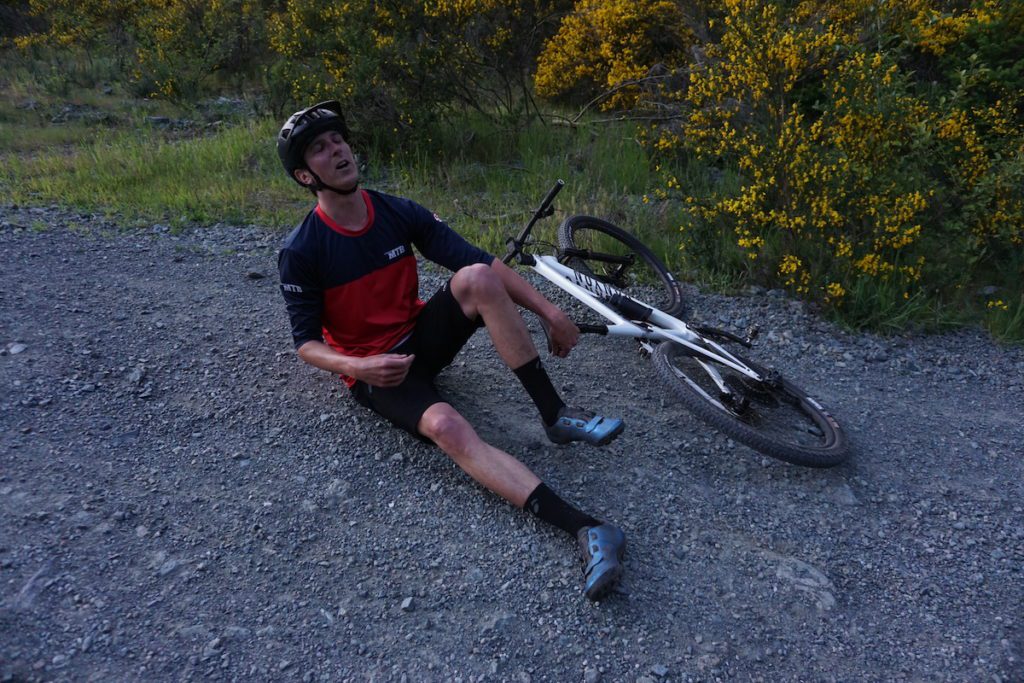 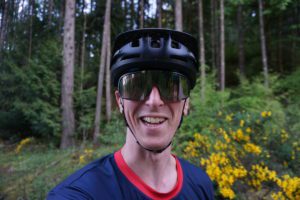 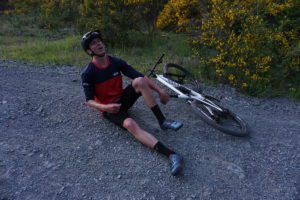 The hardest part of this exercise was the complete lack of recovery. My loop had two short descents in it but it was probably still more rest than what the pros got in Albstadt. Even then, it only felt like rest on the first lap. After that, it felt more like a moment of semi-panicked survival before the next effort.

Attempting this myself made it way more impressive to watch the pros racing on TV. Seeing how they can start so fast, then recover and play tactics at a blisteringly fast pace. It also made it easier to understand how a rider could look fine one lap and then be completely off the back moments later, even if they’d only been racing for 10 minutes.

Short track is a thrilling addition to World Cup racing. The fast-paced and short events are fun to watch. They’re even more exciting knowing, to my own very minor extent, what those riders are going through on course.

Albstadt World Cup returns for 2022 with the Short Track race on Friday, May 6. Mathieu van der Poel will be busy at the Giro d’Italia, but you can tune in to watch Canada’s fastest live on Red Bull TV.