This week, Jenn Jackson joined Emily Batty and Laurie Arseneault at Canyon MTB Racing. The move to the Canadian pro team builds on her first elite cross country national title and a solid year of improving results on the World Cup circuit.

The move is also the result of years of working, quite quickly, up the ranks from riding with a local shop to a place with the Norco squad.

We caught up with the Canadian national champion to talk about working through the ranks with Norco, what attracted her to Canyon, the role of mentorship, and why she’s still putting in hours behind the wrenches, not just on the bike.

CanadianMTB:  You’ve been with Norco – in one way or another – through your entire mountain bike career. Can you describe how your connection to the brand and team developed?

Jenn Jackson: It was a super organic, gradual progression, to be honest. I worked at a Norco dealer before I was racing or even owned a mountain bike. The owner, Morgan, lent me a bike to race at some OCups 2016 and got me thinking this sport is something I could do. Through 2017 and 2018, I bought frames and parts through the shop or secondhand from friends, opting to stick with the brand for consistency and a bit of hopefulness that support might come once the results came. And it did; 2019 things started to shift from being 100 per cent shop and self-supported to having a couple of component sponsors, and getting one of the new Revolver frames, then being an ambassador and affiliated athlete from there.

Overall it was just a steady build of getting faster, being friendly, and being present in the local cycling scene and racing community!

Was there any trepidation leaving the brand after so long? Was there a  reason you chose to do so?

A bit, of course being a lifer with a brand can be a point of pride. I think there’s comfort in familiarity, which can make change uncomfortable. But I was feeling pretty a bit stuck in my position and like I needed new space to grow and be excited to make progress professionally and performance-wise again.

How did the conversation with Canyon MTB Racing start? What attracted you to that team?

So, mid-summer I sent out resumes to see if I could find any opportunities, or at least see where the value for a rider at my level was. There were a lot of no-replies and a couple direct “No’s” from European teams, but I think it’s to be expected when you’re cold calling for a job without any solid references or an absolutely killer resume.

Amongst those teams, I got in touch with Adam (Morka, Team Manager) and Canyon to ask what their team outlook was for 2022. As fellow Canadians, it was easier to drop in and have a conversation since you already know each other a bit. We had a good chat ahead of Nationals and they were super positive about wanting to help me. They saw some of the potential I’d shown as well as the challenges I was facing and expressed that they felt like they could help me and that I’d be a good fit with Canyon, Emily and Laurie. Honestly, having that affirmation and vote for my future meant a lot, and it was on my mind for the races that weekend.

A big thing that attracted me to the team is that the Lux has two bottle cages, which will be life-changing! … But honestly: fresh positive energy, being around people who have fun at and around the races, and having teammates who will make me better. I think I learn best by seeing, experiencing and discussing so being able to have Emily as a teammate who has been to the top to learn from, along with Laurie who is 100 per cent good vibes and full send, I couldn’t look anywhere else for better teammates to ride and spend time with. I’m also really excited to be riding for a brand that has both cross country and dirt drop-bar disciplines as a priority, and to just learn new equipment and see what it can do for me! 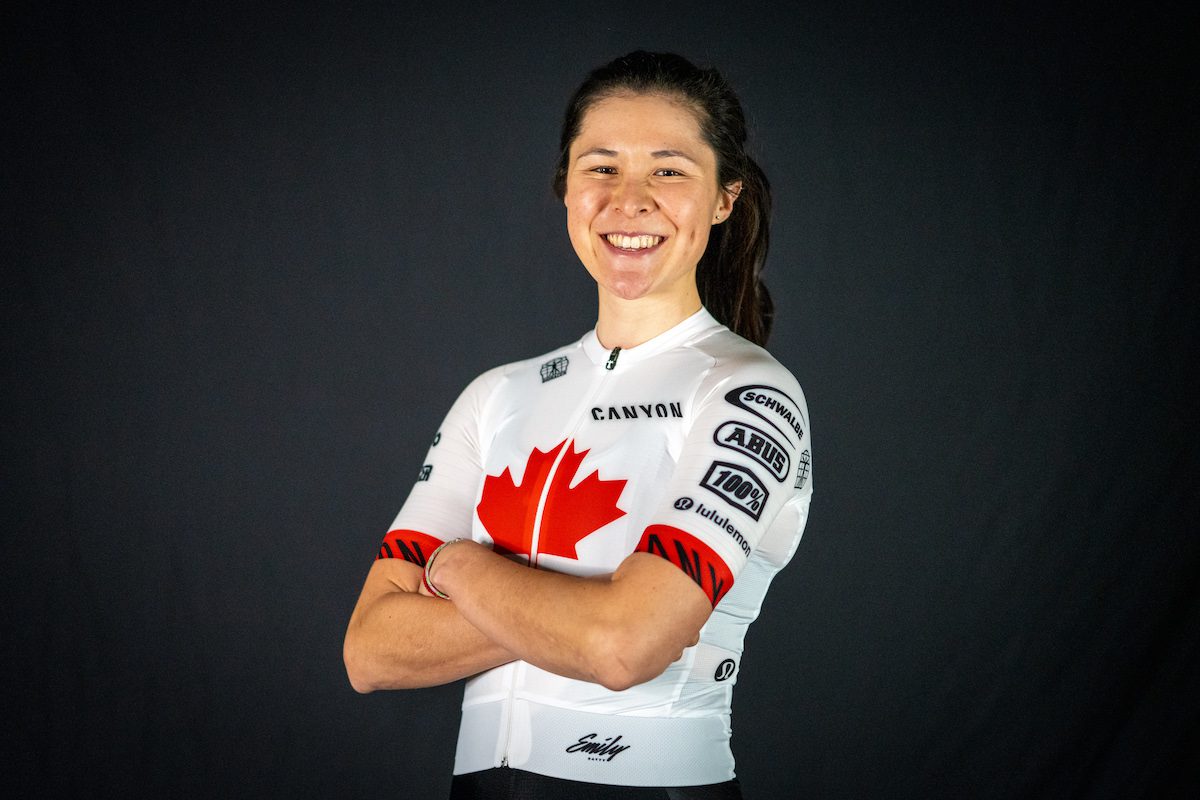 Last year you won your first elite XCO national title. Does that change how you approach this season? What are your goals for this season?

Not really, same approach is the same, I still just want to be faster. I suppose there’s a feeling now that I want to be proud wearing the jersey and to represent myself, my team, and Canada well in the races.

I’d like to move towards being a Top 20 level rider at the World Cup. The number is a bit arbitrary, because how everyone else rises or dips will affect where I fall on the list, but in general closing the time gap between myself and the front of the race. Nationals is also back at Hardwood this summer, which is my home course, so racing well there and fighting for the jersey is on top of the goal sheet. I think it could be a pretty rad race for the team. Emily and Laurie won Elite and U23 Nationals there last time in 2019.

Between Norco and your training partners, Catharine Pendrel and Sandra Walter, and now teammates Emily Batty and Laurie Arseneault you’ve been surrounded by several of Canada’s best racers. How important is this type of training partner/teammate to you? And how do you think that’s impacted your career so far?

Catharine and Sandra have been my best friends, teammates and mentors since I really got onto the World Cup scene in 2019. Being connected with them has shown me how fun and rewarding the process of being a professional bike racer can be, along with sharing perspectives on the challenges of getting there. They also made it feel like I belonged in the sport, had a place in Canadian mountain biking.

Belief, authentic self-belief, is hard for me to come by. I operate more in the realm of “working on dreams,” so having people who believe in me first means a lot. And not necessarily in believing I can accomplish a certain result or objective, but more in believing that I still have space to improve and discover in the sport and then being there to support me to try and get there. That’s also how I feel, and what I see in the opportunities joining Canyon to ride with Emily and Laurie. It’s a program with a ton of opportunity, space for me to see that growth, and of course the people to help foster it. 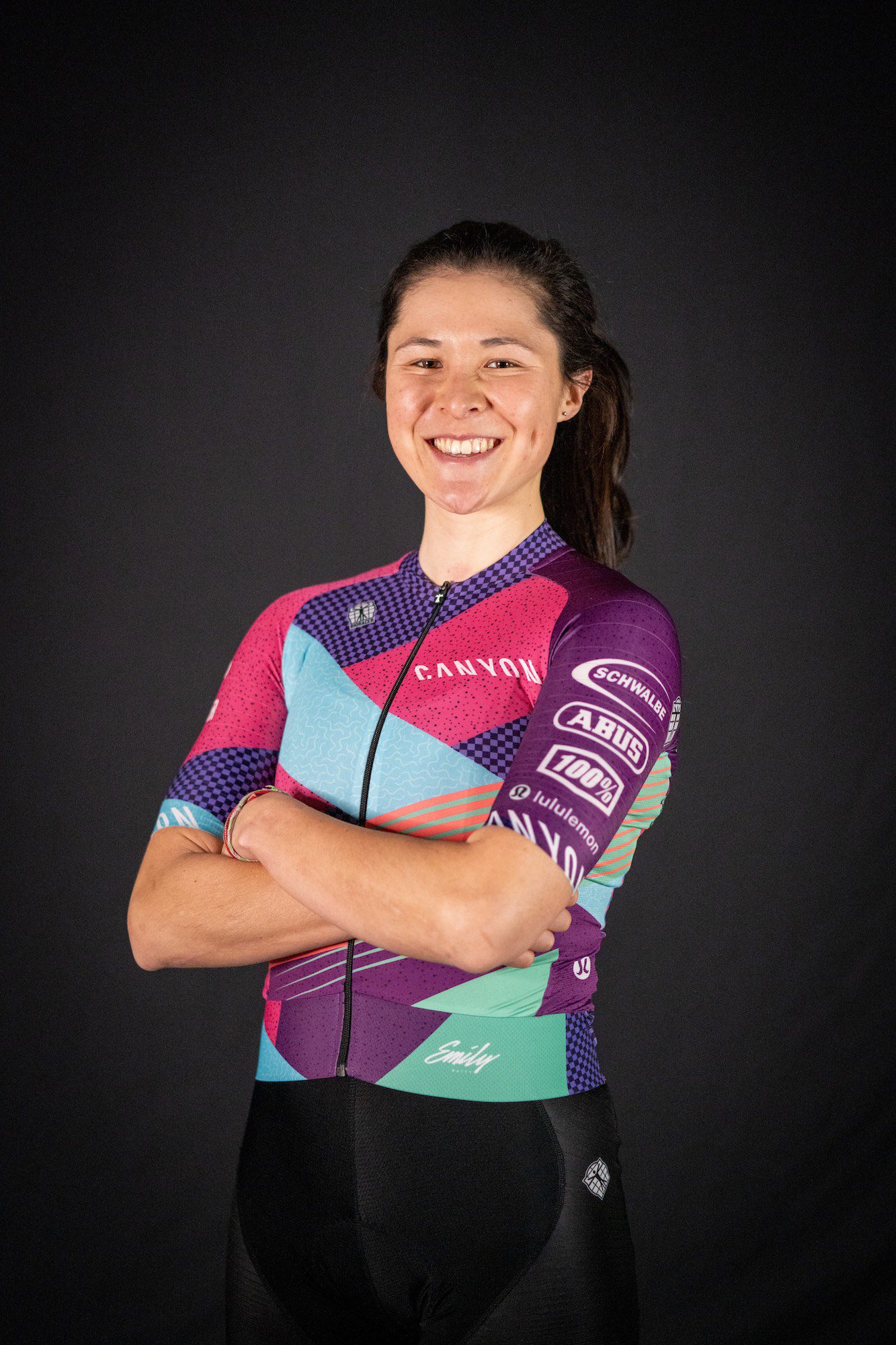 You’ve made a point of balancing your training with work outside of racing, often at bike shops. Do you plan to continue this? And what do you see the benefit of having a job like that is to a racer?

I’d say I’ve made a point to not bankrupt myself or incur any debts trying to become a pro bike racer by continuing to work. I was very fortunate to get into the sport through working at a bike shop. I have benefited from having employers who are passionate about the sport and want to support me by allowing flexibility for time off to go race and security knowing when there’s a job for me in the breaks between.

Working gives my life a bit of structure outside of training. It’s where I can socialize with my friends and co-workers, catch up with local riders in the community who drop by, I get to continue practicing as a mechanic and be more up to speed on what’s going on in the industry. And just getting a paycheck is nice too… With the balance of a lighter schedule now, there really isn’t really a downside. I’ve only been working two days per week this winter compared to four in previous years. Of course, I’m lucky to have established good relationships with my bosses, having been a consistent employee at the store, so I really see being able to have this type of job flexibility now as a privilege and opportunity to give back and help lighten the load of the more regular staff.