Jolanda Neff’s year started on a down note when the Olympic champ was forced by illness to sit on the sidelines and watch the Brazil World Cup. The Swiss start kick-started her comeback on Friday with a tactical Short Track World Cup win in Nové Město.

Off the start, it was 2016 Olympic champion Jenn Rissveds (Team 31) leading onto dirt. Jolanda Neff (Trek Factory Racing) and Anne Terpstra (Ghost Factory Racing) sitting in her wheels. World Cup leader Rebecca McConnell (Mondraker Primafloor) is right there in fourth, moving up through the field as riders slowed up dramatically. New for this year, there’s a slow grass climb leading into a headwind on the start-finish straight and no rider is willing to put in the work to push the pace.

The slow gives Sandra Walter (Liv) and Jenn Jackson (Canyon MTB) a chance to move up in the field. Jackson, unfortunately, is one of several riders squeezed into the metal railings as riders bunch up at a slow, sharp 180-degree corner. Jackson is quickly back on her bike and is still in the race.

Up front, it’s still Rissveds setting pace. The laps are short, with little opportunity to spread out the field compared to previous years.

The field continues to bunch, and Jackson uses the slow-down to move all the way up into the top 10. Short Track results are still crucial for starting position in Sunday’s XCO, and this is a chance for riders to move up – or backward – on the start grid.

Lecomte tries to make a move

On the fourth of nine laps, Loana Lecomte (Canyon Cllctv) tries to inject some pace into the steep grass hill. Unable to create any distance, and with a big headwind on the fast, paved start-finish straight, the field slows down and bunches right back up going onto the second half of the race. The big bunch is making holding position hard as almost all of the 40 starters are still riding shoulder-to-shoulder on the wide-open course.

With three laps to go, this is turning into a curious race. Everyone is still together, minus a couple of stragglers. The pace has picked up, but there’s not really a place on the course to create any meaningful separation. The lead is still constantly changing, with all the expected favourites still on, or near the front. Pauline Ferrand-Prevot (BMC) is the lone exception. Having snapped a chain, the European champ and current XCC World Cup leader is forced to withdraw from the race.

McConnell is the first to take a real initiative. The Australian pushes the pace going through the start-finish then continues attacking. She’s putting in a huge effort to create small separations, but it’s starting to work. Her attack splinters the field into small, tightly spaced groups. There are still two laps left, so it’s a bold move.

Going out onto the final lap, McConnell’s lead group has swelled to 10. That diminishes slightly when Neff attacks up the grass hill, but it’s still a bunch sprint for the line. McConnell is on Neff’s wheel, with five more riders right behind.

Neff opens her sprint first, leading from the front. McConnell tries to go around but runs out of gas after her efforts creating the break. Short Track world champion Sina Frei (Specialized) and Rissveds also try pass. It’s close enough that it s a four-way photo finish at the line.

Neff holds on, timing her effort on Friday perfectly to take the win.

“It could not have been any better. Honestly, going up the grass hill I thought someone was going to pass me,” a very happy Neff said after the finish. “On the tarmac, I was still on the front, so I thought ‘OK, I’m going to sprint now’ and I won, it’s amazing!”

Asked how she’s been recovering from illness in Brazil, Neff said a mental shift is what made the difference in taking her third XCC win.

“I’ve completely changed my mindset from last week. Now I’m telling myself ‘I’ve had the perfect recovery, and I’m fresh.’ I think that’s the difference today. It worked, and I won. I really want to get that win in cross country. We’ll see when that happens, but I’m so happy to get that World Cup win today.”

McConnel holds on to take second. That not only extends her World Cup overall lead but, with Ferrand-Prevot forced out of the race, puts the Australian in the Short Track World Cup leader’s jersey as well.

“Just when you think things can’t get any better, there’s something else cool!” McConnell said of adding another jersey to her remarkable run of success. “It was another messy, tactical race. It’s a really hard course. Anyone who wants to do some work is going to pay for it. My goal was a top 8 to get a front row Sunday. I needed to go to not leave it to a sprint, so I’m really happy with second. Jolanda had it head-and-shoulders in the sprint, she was just stronger.”

Jenny Rissveds takes third, clearly hurting from the effort after the finish line.

Jenn Jackson leads the Canadian effort. The XCO national champion was 14th at the finish line. That bumps her up to a second-row start for Sunday’s cross country race. Sandra Walter placed 30th in Friday’s XCC. 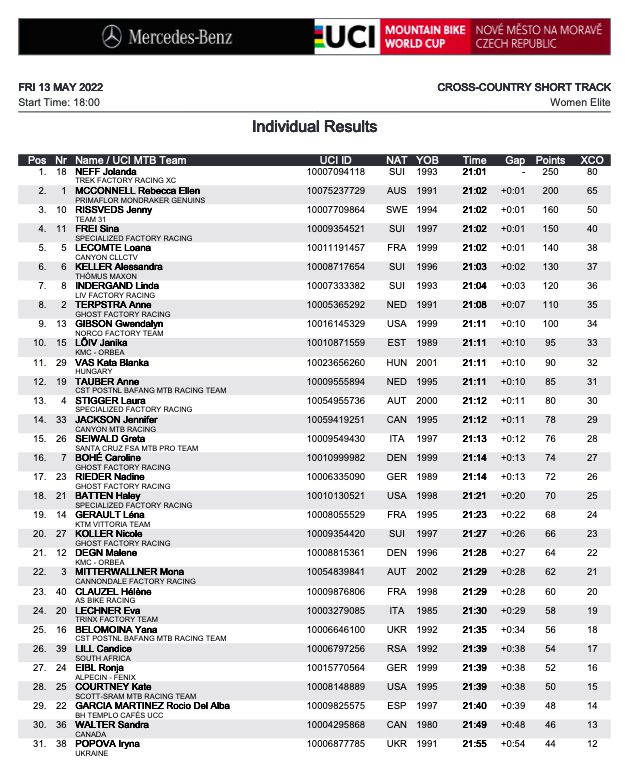 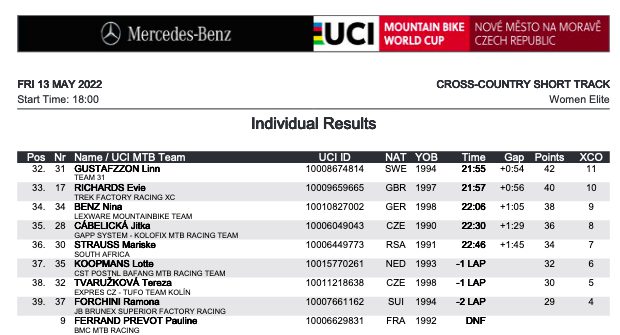