The only mountain biker to win two Olympic Gold medals cited a worsening pollen allergy as one of the main reasons for his retirement, according to L’Equipe. Absalon’s allergies are a new development, only beginning to plague the decorated athlete late in his career. “I’ve been suffering from allergies to pollen in the south of France for the past three years, mostly at the start of the season,” said Absalon to Agence France-Presse. While new, Absalon was told by his doctor that the allergies would only get worse over time.

In an interview with L’Equipe, Absalon suggested he was no longer interested in racing if he could not achieve the same level of success he had achieved in the past. Asked if the winner of 33 World Cup rounds would consider requesting therapeutic use exemption (TUE) for otherwise prohibited allergy medications, Absalon responded “I don’t like to take too many medicines.”

The use and abuse of TUE’s is currently at the center of a growing controversy involving several of the top ranked UCI road cyclists, including Tour de France winner Chris Froome. 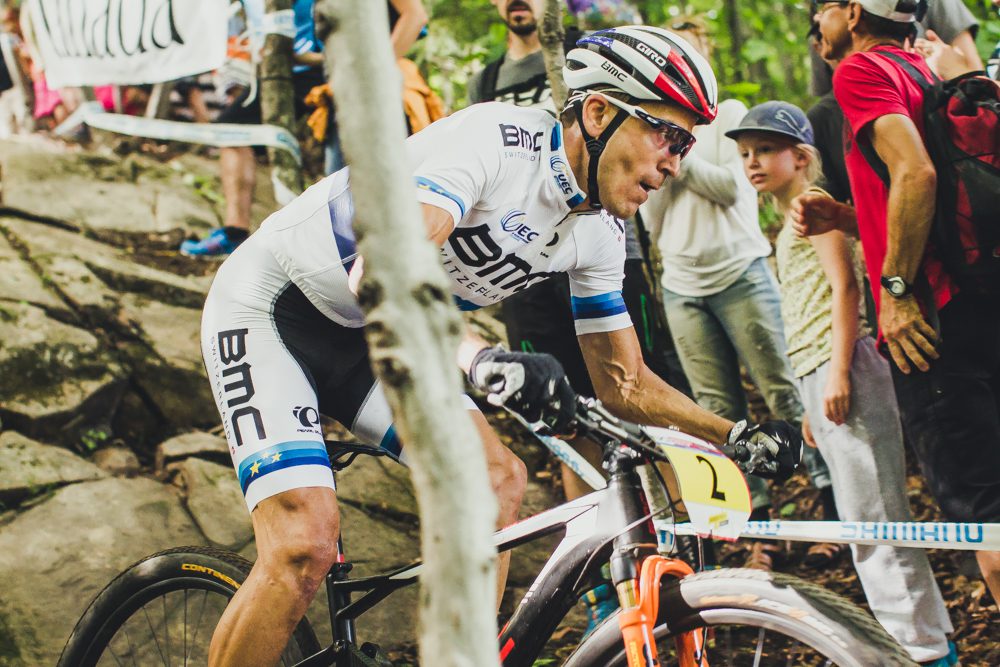 Absalon has been a dominant force in cross country mountain biking since his arrival in the elite ranks in the early 2000’s. The perennial French national champion won four straight XCO world championship titles from 2004 through 2007, along with seven World Cup overall titles between 2003 and 2016.

The rise of Swiss XCO phenom Nino Schurter tempered Absalon’s dominance of the World Cup circuit, and started a fierce rivalry between the elder French athlete and the young Scott-SRAM rider.  Even with Schurter and a new generation of XCO racers bringing depth to international cross country racing, Absalon continued to win World Cup rounds all the way into 2016, when he last won the World Cup overall title.

Absalon will be most remembered for his two Olympic titles, earned at Athens in 2004 and Beijing in 2008. He remains the only mountain biker to win two Olympic gold medals since the sport was introduced to the Games in 1996. Absalon again represented France at the Olympics in 2012, where he withdrew from the race after an early flat tire, and in 2016 at Rio, where he finished eighth.

Before Rio, Absalon had said it would be his final year of racing on the World Cup circuit, but he continued racing throughout the 2017 season. Results, though, were not the same. Plagued by injuries that set back his training and, as we now know, early season allergies. He was third twice in 2017, at Nove Mesto and Val di Sole, but finished seventh in Albstadt and 13th at Mont Saint Anne and missed the remaining two rounds.

At the opening round of the 2018 World Cup season in South Africa, Absalon only managed 41st.

Going forward, Absalon told AFP he will focus his efforts on managing the Absolute Absalon racing team that he launched for the 2018 season. In an Instagram post announcing his retirement, the French legend hinted that fans had not seen the last of him between the course tape, suggesting he would try his hand at racing other disciplines in the future.