Knolly is bringing the Chilcotin back bigger, tougher and more enduro. While Knolly’s had bikes capable of racing enduro before, the Warden has done time on the EWS circuit and the Fugitive’s also edges on enduro territory, the Chilcotin is the brand’s first 29″ full-on, dedicated enduro race bike. It has the travel numbers, angles and attitude of an Enduro World Series race bike.

“Enduro” is still a broad category, though, and Knolly has its own take on the enduro race bike. Central to the Chilcotin’s distinct performance is the 6066 series aluminum frame and Fourby4 V.5 rear suspension design.

Those familiar with Knolly will remember the Chilcotin name, but it’s been a while. The last time this bike roamed B.C.’s trails, it was on 26″ wheels. Now, the new-look Chilcotin is only the second Knolly to roll on 29-ers, after the Fugitive.

Bigger wheels are only part of the Chilcotin’s race-focused update. It features solid travel numbers, modern geometry, including the slack angles you’d expect of a frame destined for the Enduro World Series and a longer back end designed for stability at speed, even on the toughest trails.

There are two build options available for the Chilcotin, the 151 and 167. Those numbers reflect the bike’s rear-wheel travel, with the 167 offering a full-on, long-travel enduro race option for the B.C. brand. It comes with the stout chassis of a 170mm fork, either RockShox Zeb or Fox Float 38 depending on build options.

The Chilcotin 167 doesn’t just have more suspension travel. It’s also more purely race-focused than the 151. The no-holds-barred geometry puts it in line with other modern enduro bikes, including a slack 63.8-degree head tube angle, 76.9-degree seat tube angle and, for stability at speed, longer 438mm chainstays. Like Knolly has done for years now, the Chilcotin comes with two shock settings, “slack” and neutral. In neutral, these numbers shift slightly to a 64.5-degree HTA and slightly shorter chainstays.

The 151 adds an option for anyone not looking for full firepower of the 167. It comes with a 160mm-travel fork and slightly less aggressive geometry. That’s not to say it is tame, by any means. It’s still very solidly in the all-mountain/enduro category. It’s just not an all-out brawler like the 167. 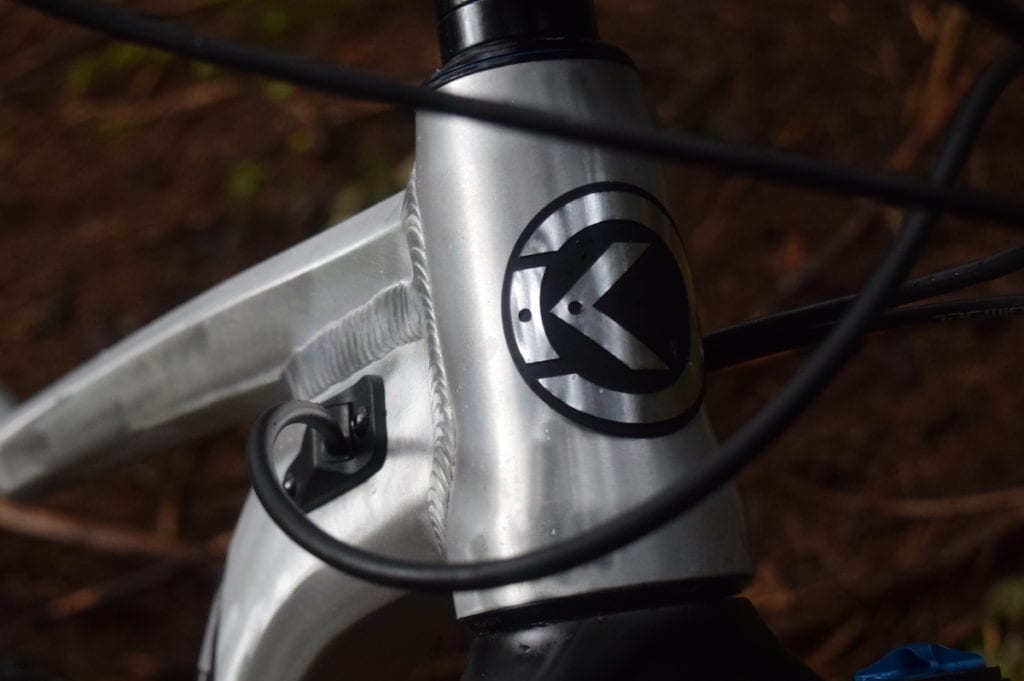 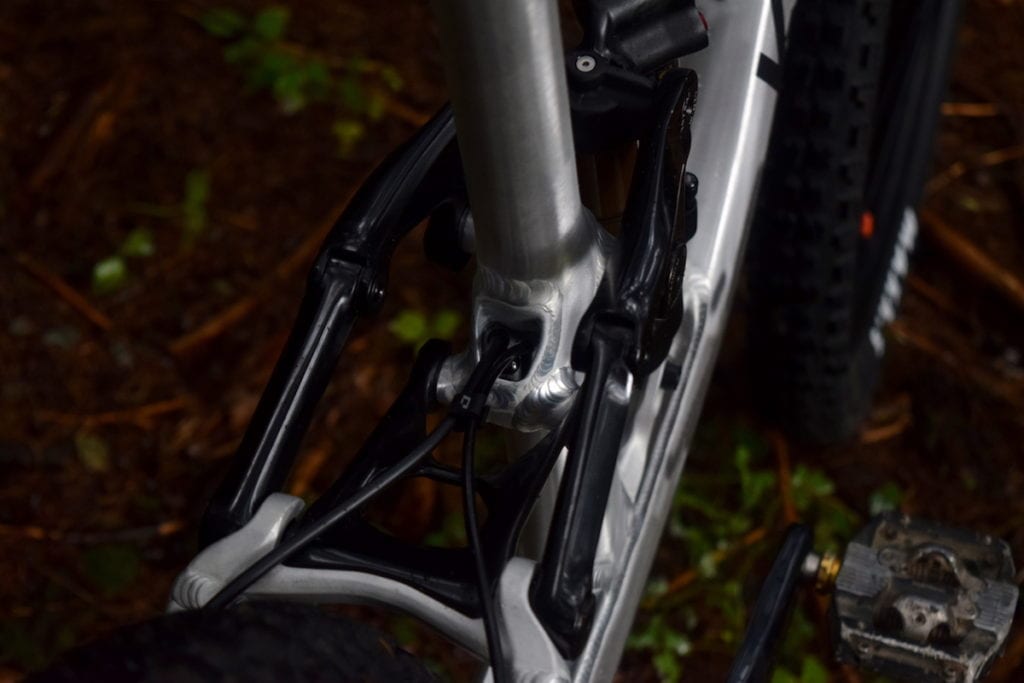 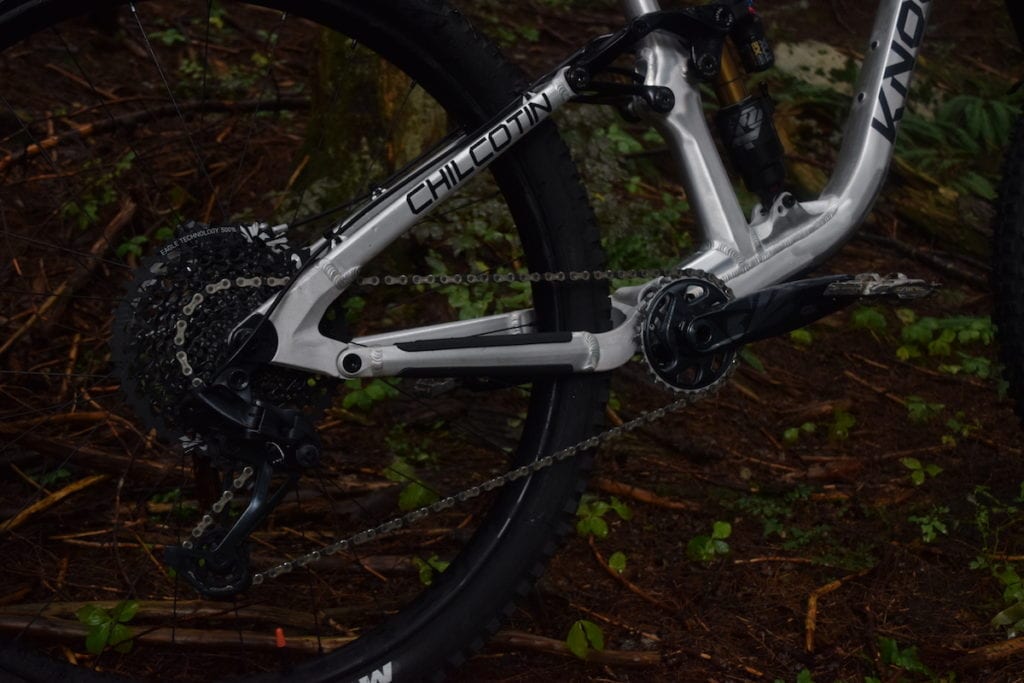 Boost 157 spacing out back, but no problem with heel clearance. 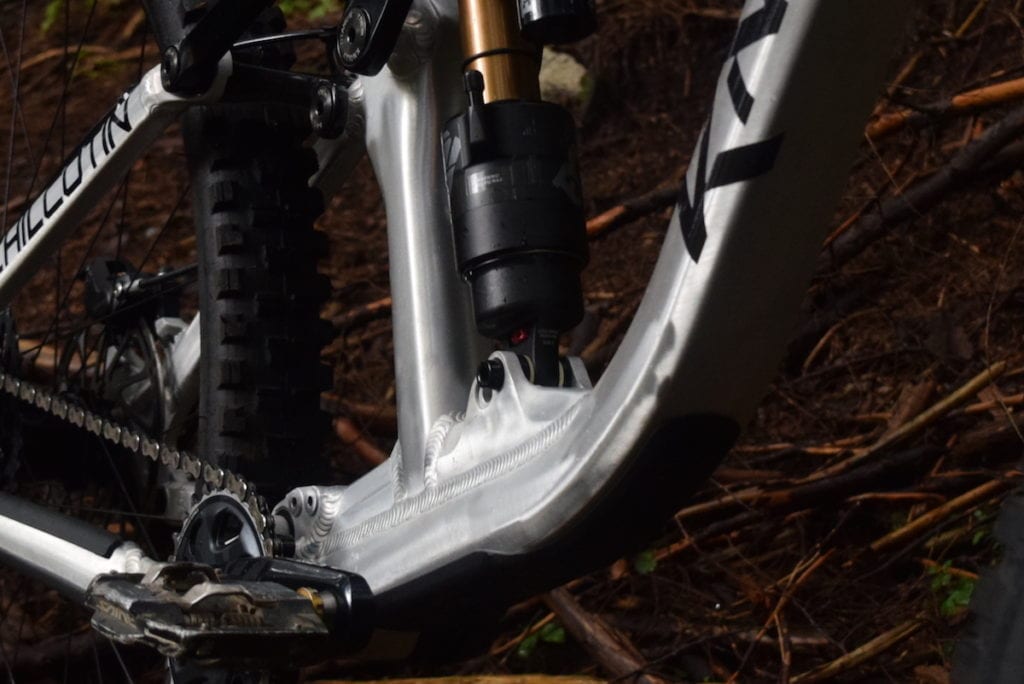 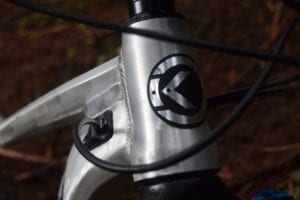 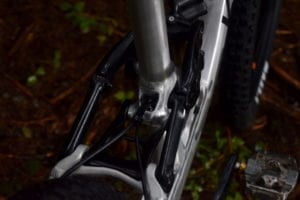 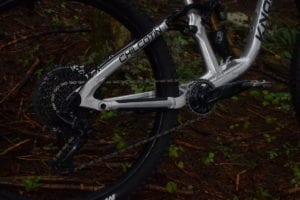 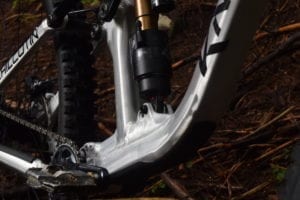 Both frames run on the most current, fifth generation of Knolly’s own Fourby4 rear suspension. It’s proved its effectiveness both on the 27.5″ Warden and on the brand’s first 29-er, the Fugitive, for its mix of traction and pedalling efficiency whether climbing or descending.

Knolly’s attention to detail continues with numerous small details on the Chilcotin’s 6066 series hydroformed alloy frame. There’s 157 boost rear-wheel spacing, clearance for 2.6″ tires and a 200-mm dropper post in the L and XL frames (175-mm for the medium). There’s custom titanium hardware throughout, removable ISGC05 chainguide tabs and a 73mm threaded BB shell. The one thing arguably missing from the frame is any sort of shuttle pad on the downtube. The bottom bracket area is well covered, but it’d be a shame to scratch the frame up in the back of a truck.

I had the chance to test out the new Chilcotin on Seymour Mountain above North Vancouver. The day mixed classic North Shore tech with some new-Shore flow and speed. Hitting a few familiar trails, the XL frame was easy to settle into, before following Knolly rider – and Canadian National Enduro Series overall winner – Daniel Shaw into steeper, less familiar terrain.

The Chilcotin has the option to run the rear shock in a “slack” setting or an unlabelled neutral setting. More and more companies are offering similar adjustments, but Knolly’s had this feature for ages. I tried out both, but quickly settled on slack. I can imagine a scenario where neutral would be preferred, on tighter more technical sections or slower trails. For the indecisive type, it is a quick trailside, single bolt adjustment. But the Chilcotin feels more than ever like it’s designed around the slack position. Putting it in slack, the bike immediately felt more alive, and easier to move around on the trail.

Which, for a big bike, the Chilcotin is impressively agile on the trail. It’s not silly-light, pick up and move around anywhere you want on the trail. Instead, its agility comes from being composed and well balanced. It very quickly felt easy to work with the bike to get it around really tight North Shore switchbacks, or to pop off roots and rocks for cheeky doubles. Which the Chilcotin, with its quick acceleration and very forgiving support even deep into the bike’s travel, does everything it can to encourage.

When I did pick up speed this balanced feeling translated to stability. The combination of Fox’s excellent 38 fork and Knolly’s own Fourby4 suspension work really well together. Both stick to the ground grabbing for traction, until you want don’t want them to. The Knolly rear end especially does an excellent job of absorbing consecutive mid to large hits without deflecting or getting squirrelly. It encourages you to let go of the brakes more and let it roll into rough sections of trail with speed. 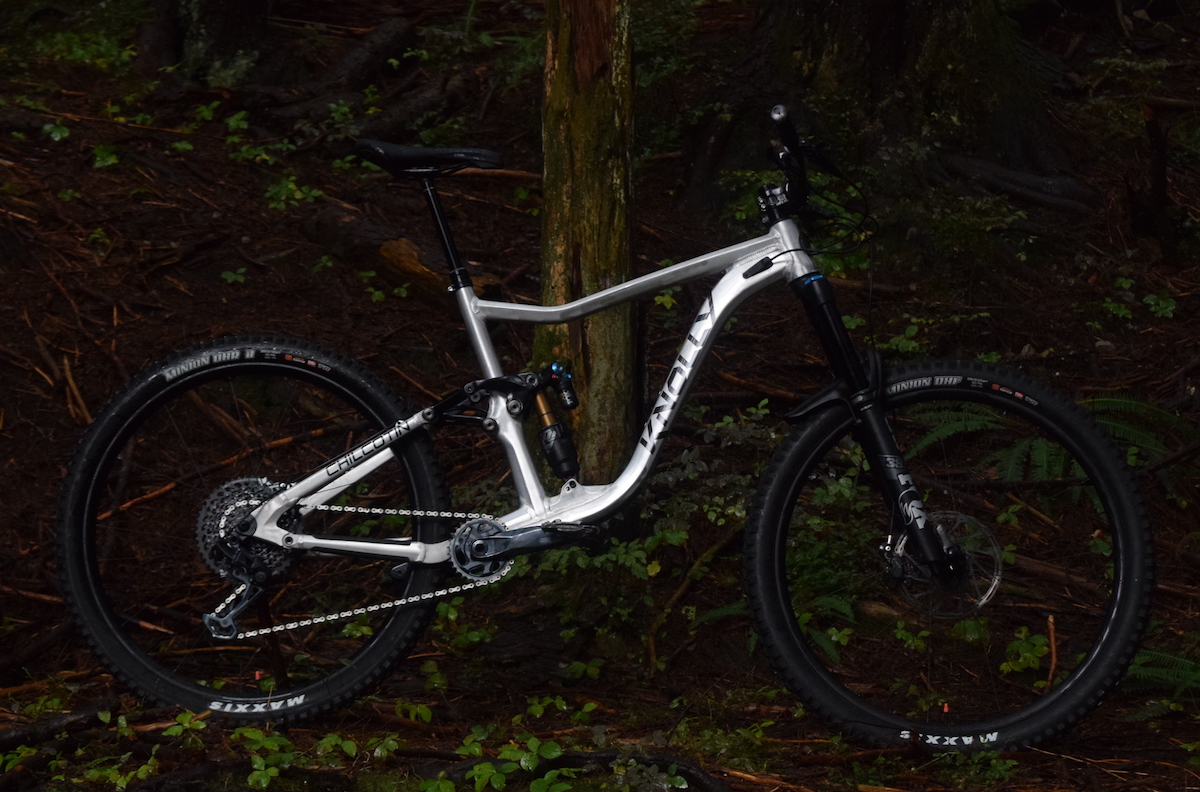 Enduro is a demanding category. The bikes have to be nimble enough to navigate tight, technical singletrack, but also burly enough to handle high speeds, occasional bike park sessions and deal with the unexpected moments that come with blind, or semi-blind racing. With the Chilcotin, Knolly strikes a good balance between those two, sometimes opposing demands. It’s not as agile or playful as, say, the Warden with its 27.5″ wheels. But holy, does the Chilcotin build up – and maintain – speed quickly.

With the Chilcotin 167, Knolly launches full-on into the demanding world of modern enduro racing, or any other burly, fast riding you might want to do. Having the Chilcotin 151 is a great option for anyone who doesn’t want that much travel, but still wants 29″ wheels and a bike that’s more aggressive than Knolly’s Fugitive.

The Chilcotin’s not limited to racing, by any means. The same toughness – surviving daily abuse and occasional bike park laps – that are required to take on EWS races, make the bike an excellent option for any rider looking to push their limits on the trail. 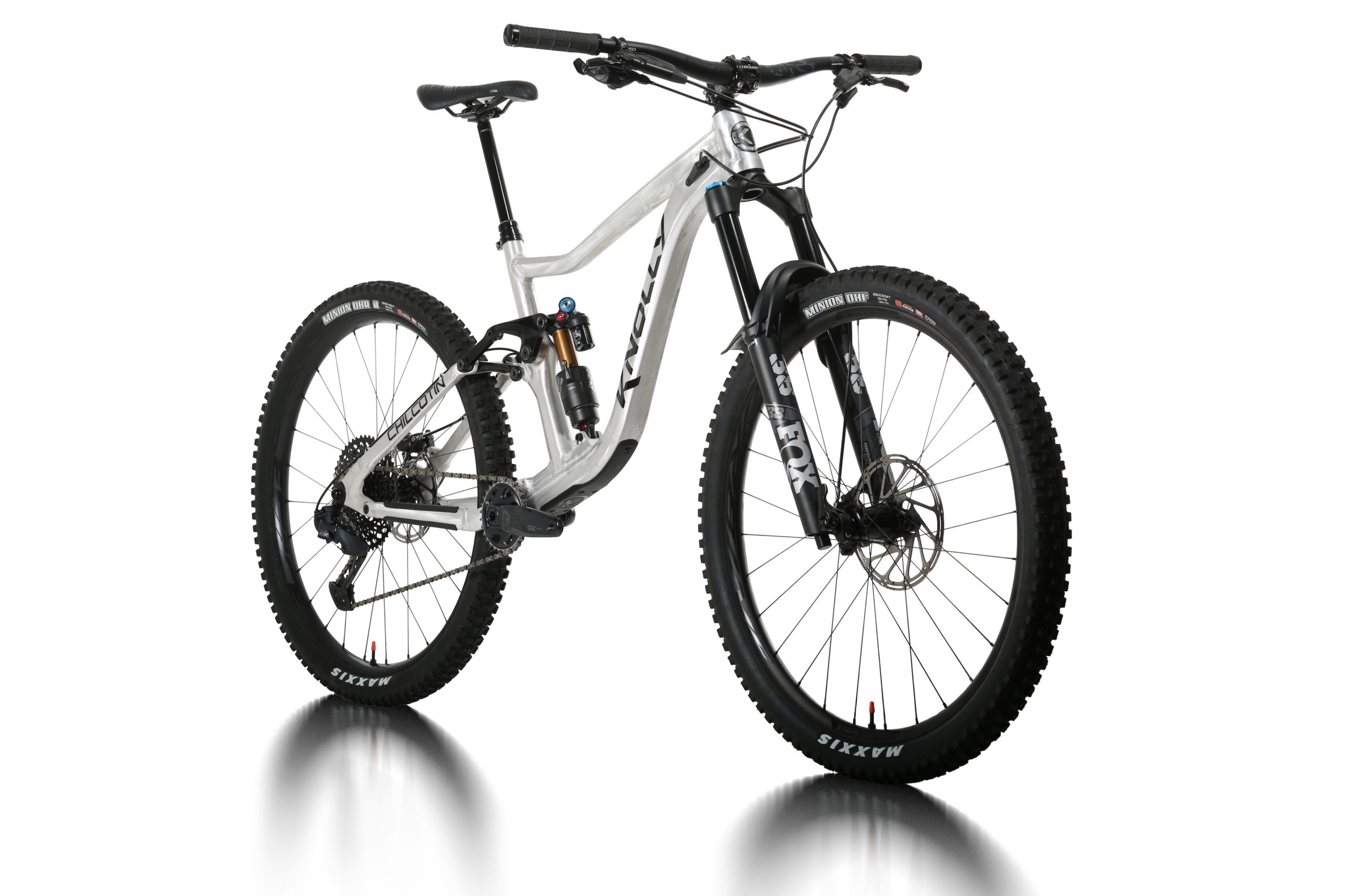 In addition to the two travel options, 151 and 167, there are two build kit options for the Knolly Chilcotin: DP and EC. Complete bikes start from $7,075. As always with Knolly, there are numerous suspension options, for air, coil and brand, so you can build the Chilcotin how you want out of the box.

There are two colour options: Moody Blue and Raw alloy. Three sizes are offered, running from medium to XL.

Chilcotins will be available for sale starting in December at Knolly Bikes dealers and online at Knollybikes.com