Knolly is getting back to it’s aluminum 27.5″ roots. For 2020, the boutique B.C. company has launched updated versions of its Warden and Delirium long travel bikes.

The two new long travel bikes arrive following a year where Knolly announced its first 29″, the Fugitive LT, and gravel bike, the Cache. 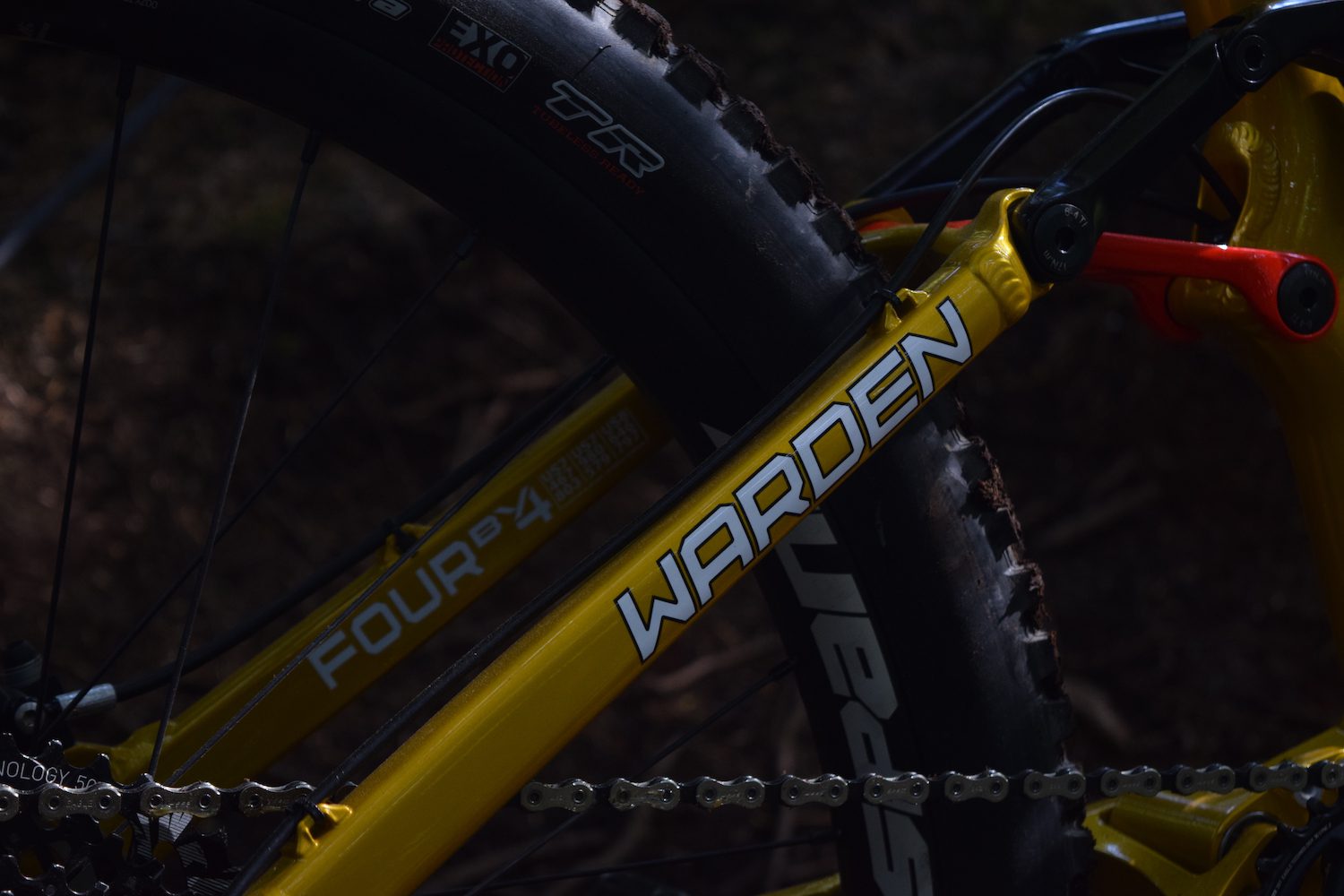 At Crankworx this summer, I had the chance to try out the next generation of Knolly’s venerable Warden platform. Along with Knolly’s Enduro World Series racer, Martin Zietsman, and Knolly’s founder and CEO Noel Buckley, I headed up towards Whistler’s Blackcomb trail network to test out the new bike. 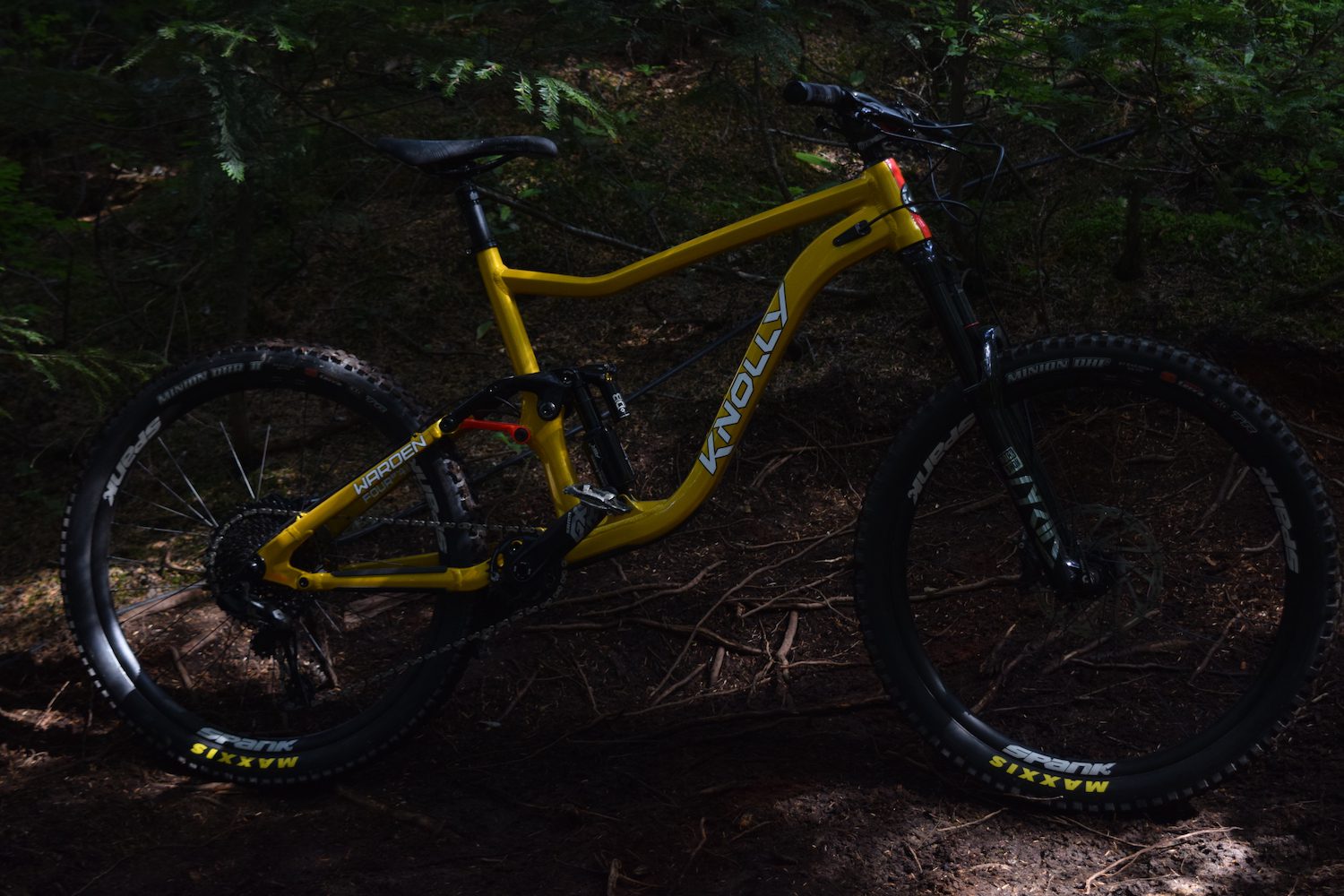 Canadian MTB covered the updates to the Warden platform when Knolly launched the newest generation of the bike in August, along with the Delirium. There’s some big changes to the the bike for 2020, which include the addition of a LT version of the Warden. While the standard version comes with 160 mm travel front and back, the Warden LT bumps that up to 168 mm rear travel and 170 mm up front.

The Warden’s use an updated version of Knolly’s Fourby4 suspension design. For 2020, the bikes have moved into the longer-lower-slacker era, but aren’t pushing the extremes just for fun. Head tube angles slacken out to 65.5-degrees, or 64.75 in the “Slack” setting, with a 500 mm reach for a size Large frame. The seat tube moves forward up to 76.75-degrees. Numbers for the Warden LT are slightly more aggressive.

Numbers on a page are just that, though. I’d enjoyed some time on the big-wheel sibling in the past, and was keen to see how the longer-legged 2020 Warden played on the trails. 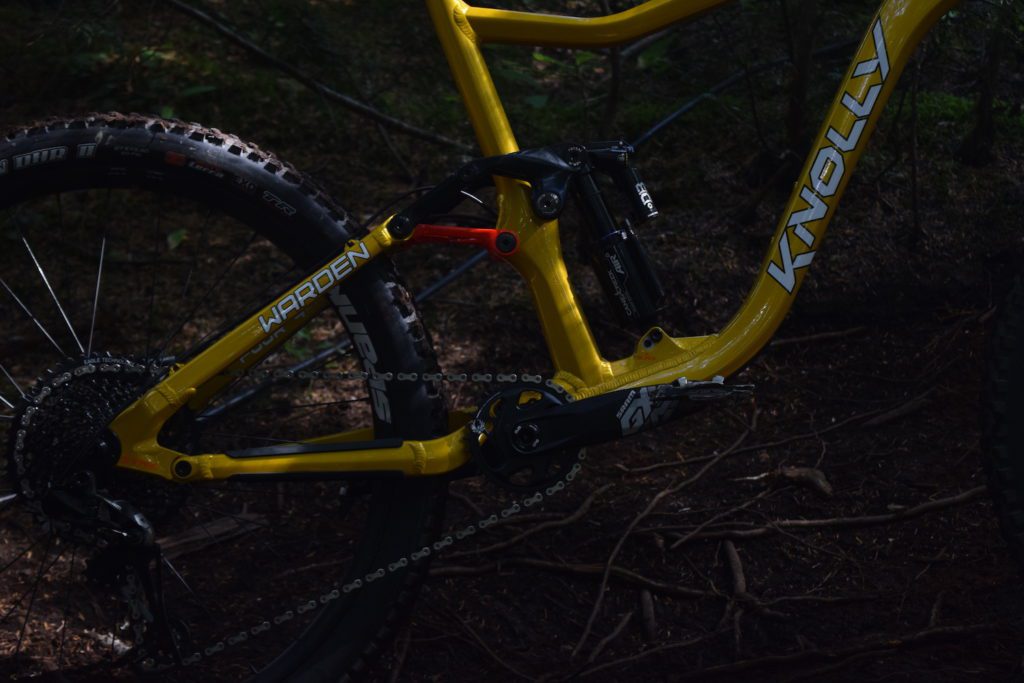 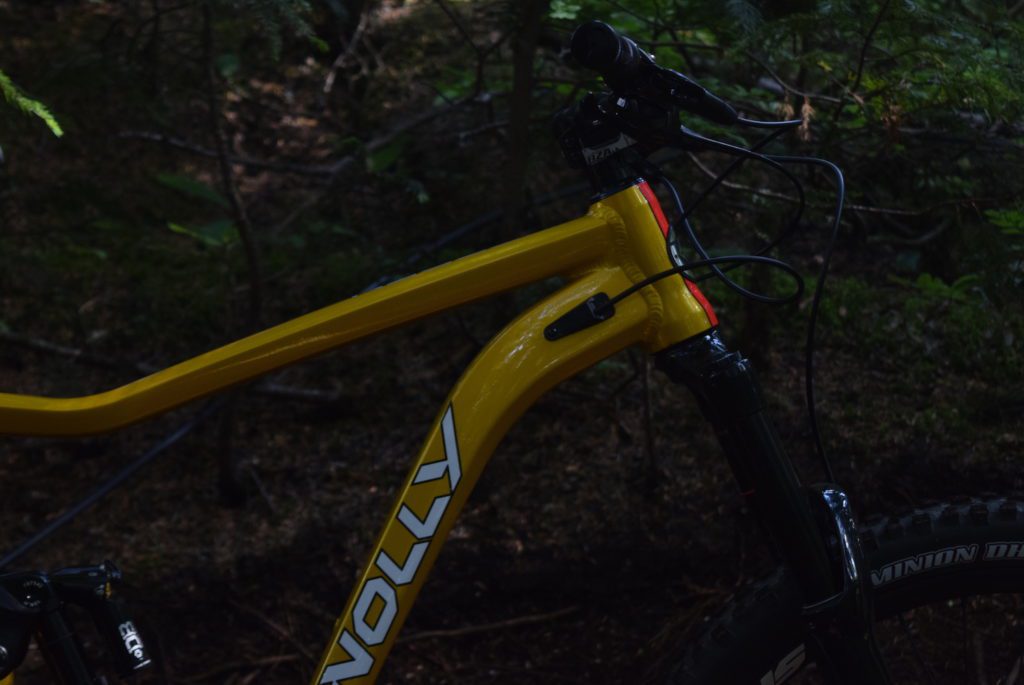 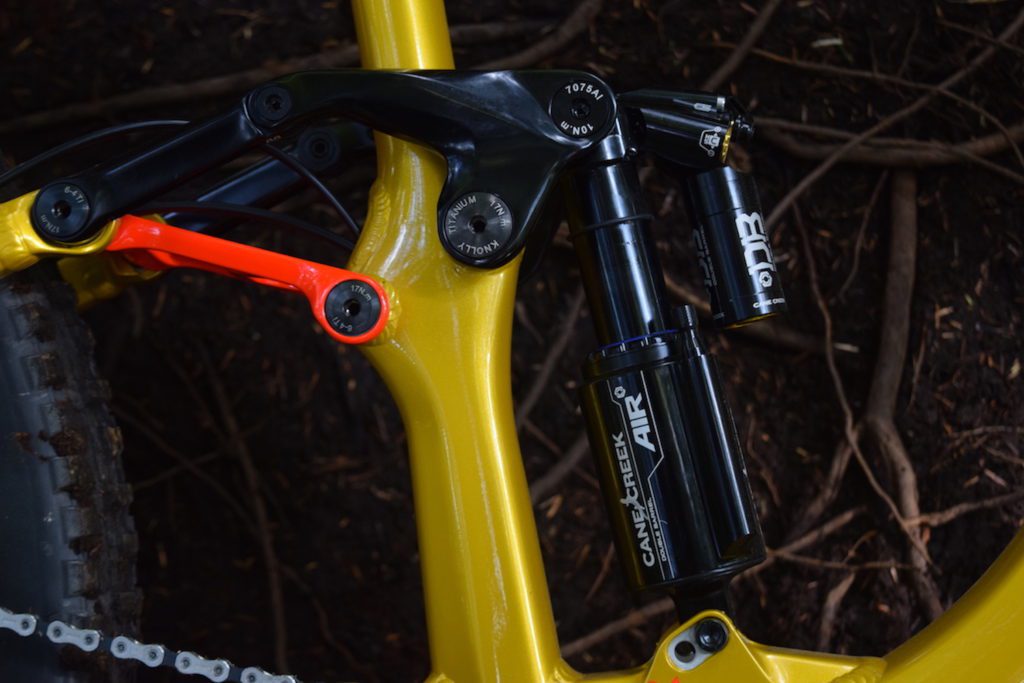 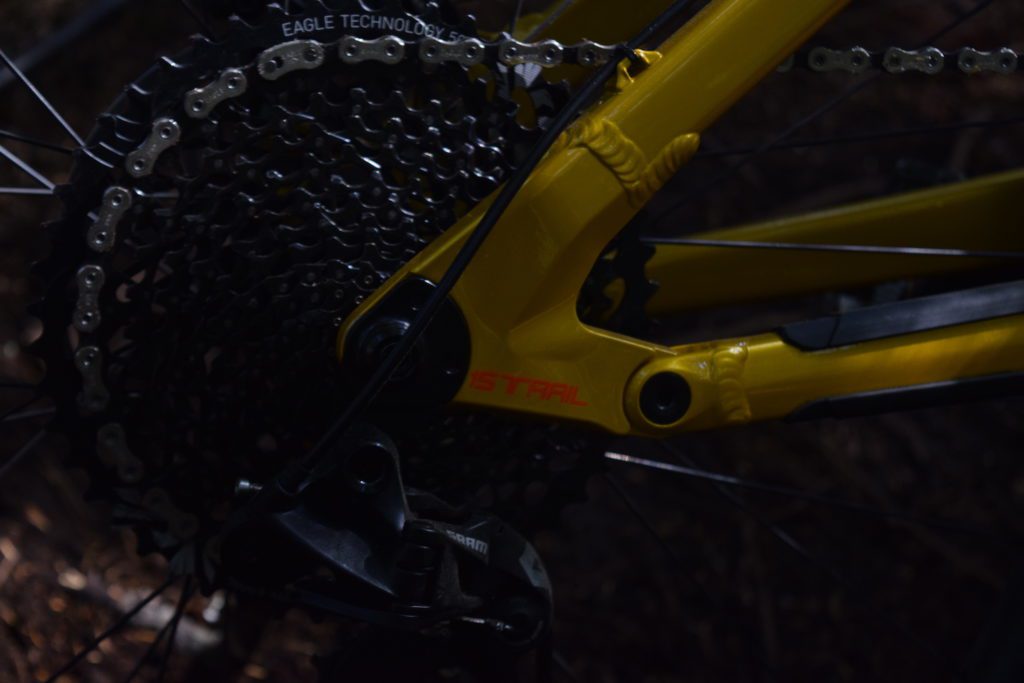 Knolly's committed to the Trail 157 standard 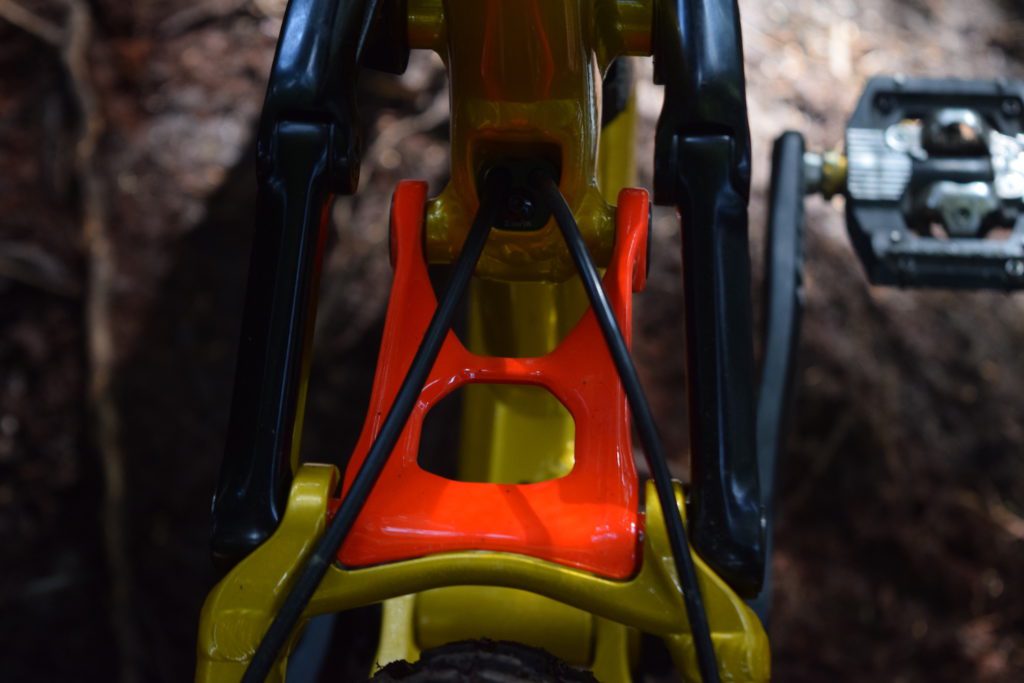 The double linkage, as well as Knolly's clever and clean cable routing 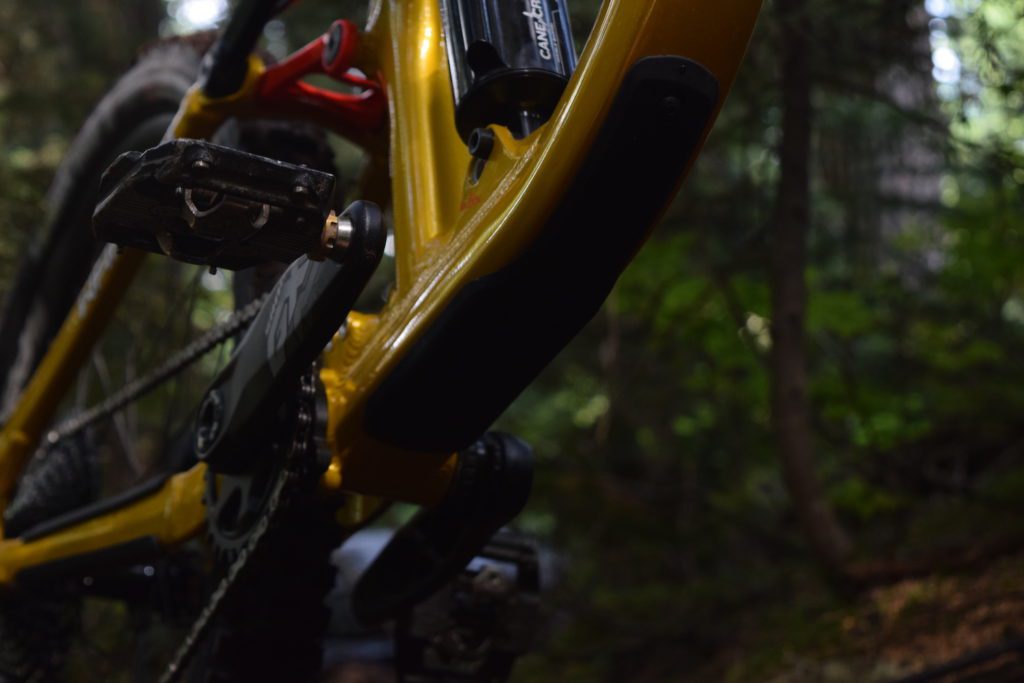 The characteristic long BB area of Knolly. You can fit a full water bottle in any size frame, even with a reservoir shock 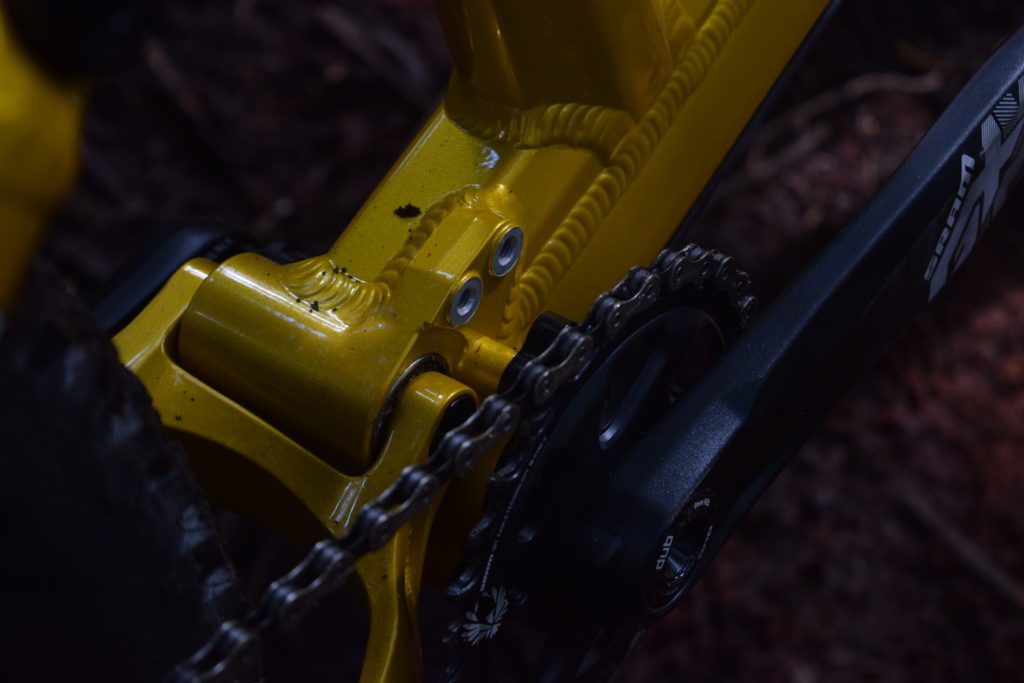 You can run E-type or ISCG05 chainguides on the Warden 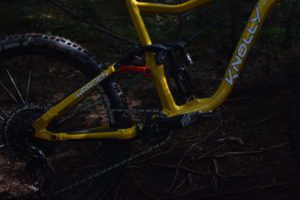 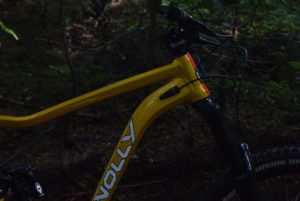 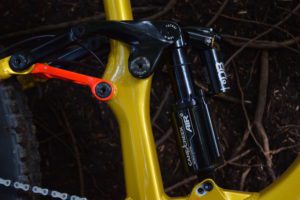 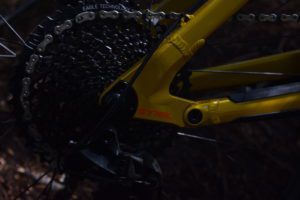 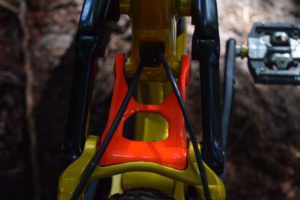 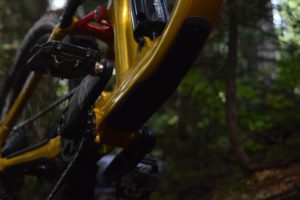 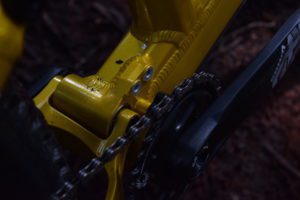 The 2020 Warden is designed to be capable across a wide variety of uses, as long as you like to charge hard. This includes racing the Enduro World Series. So, while our group could have headed to the Whistler Bike Park to repeat some of the EWS stages from earlier in the week, we decided to see how the bike handled up hill as well as down. We headed towards the Blackcomb area to ride the newer, but quickly notorious Dark Crystal. Full of rock slabs and fast, natural trail, it would be a fantastic test for the Warden’s trail authority.

To get there, though, we had to pedal. Knolly’s Fourby4 suspension has built a reputation for capable climbing as well as rowdy descending. After a section of steep gravel access road climbing, we hit Out Of the Dust. At this point, Noel had to peel off, drawn away by the usual business of Crankworx. Martin Zietsman and I continued upward, onto the root-strewn climb trail.

While the Warden gives up some of the roll-over capability of a 29″ bike, the Fourby4 keeps the rear end planted. Knolly’s suspension is designed to separate pedal input and trail feedback. The intent is to create a bike that feels firm under power, but is still active enough to react to bumps while climbing. This proved true while climbing Out of the Dust. Over rocks and mazes of roots, the Warden’s little wheels held traction, and kept moving forward. Zeitsman and myself are both over 6 feet tall, and riding XL frames. While it took a little more care, the long bikes were still comfortable winding around the trails tight switchbacks.

The payoff of the smaller 27.5″ wheels comes on the downhill, where they’re supposed to turn and accelerate faster, making for a more fun or playful ride. With plenty of tight corners to show off the Warden’s cornering chops, and rough, fast terrain to test the bike’s ability to carry speed, Dark Crystal was an ideal trail to test out the new All Mountain rig.

Knolly’s come with adjustable geometry, giving riders the choice between a “Slack” and “Neutral” setting. Talking with Buckley after the ride, he says he spends his time split between the two settings on the 2020 bike. I started in Neutral, giving the Warden a 65.5-degree HTA. The bike was comfortable on the steep terrain. 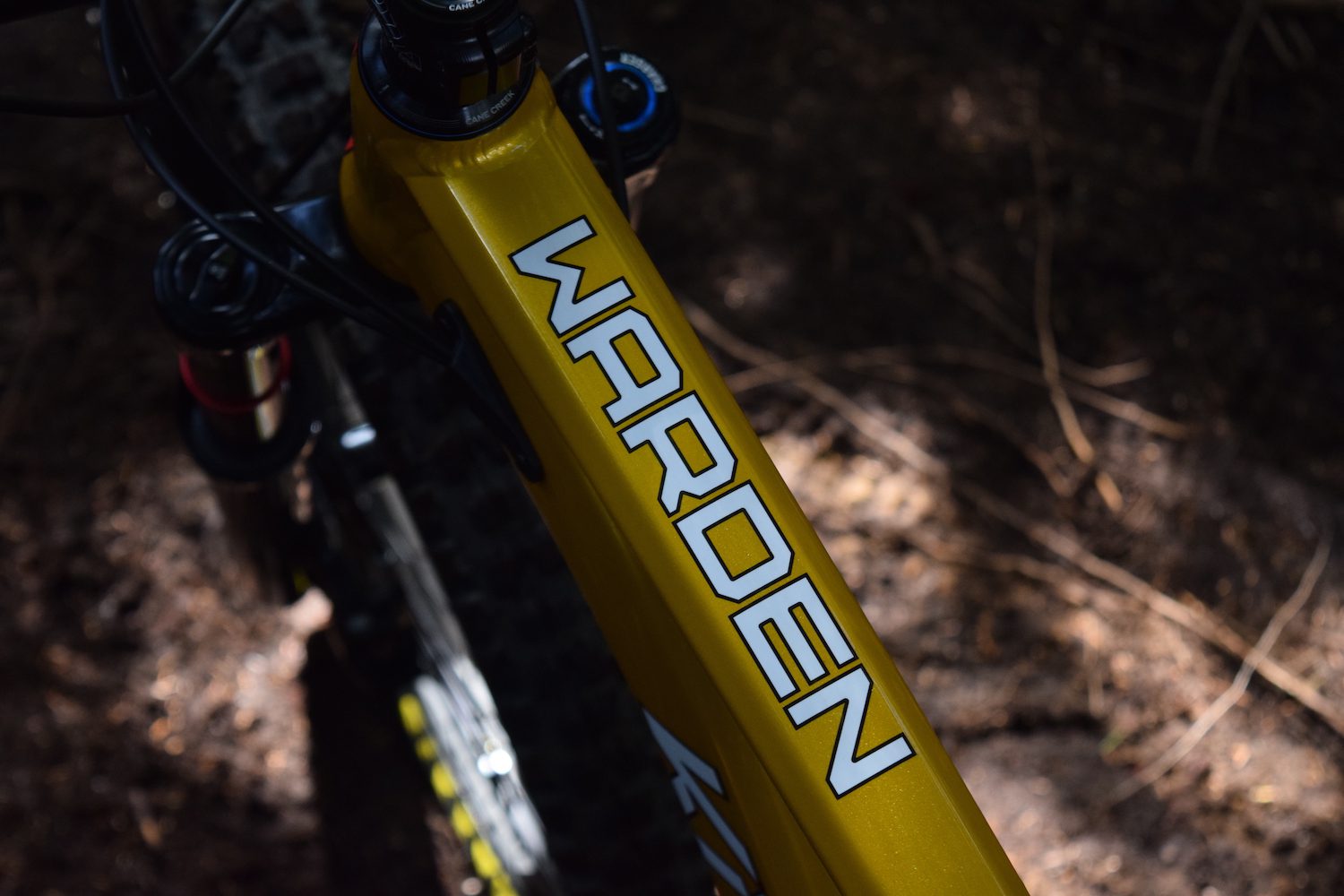 When I switch to “Slack” part way down, though, the Warden came alive. It went from happily plowing through chunder, to absolutely eating up trail. As promised, the Warden devoured rough terrain, and flew out of corners. I still couldn’t keep up to Zietsman, who was spending as much time off the ground as he was on it, but I could see him for a bit longer. And the Warden gave me the confidence to try follow some of his lines (as well as the support to ride it out when the trail reminded me I am not an EWS-level rider…). Most importantly, for those of us not racing the clock on weekends, the Warden was really exciting to ride.

Whistler is world-renowned for the difficulty of its trails, so it makes sense that the Slack setting would be more comfortable on a black diamond-rated trail like Dark Crystal. It was, though, interesting to see how much of a difference the small geo change made. The Neutral setting felt like it would be great for tackling longer days, such as back country adventures, where you still want the Warden’s long travel, but aren’t hitting the steepest trails around. Or, since I was able to switch between the two with just an Allen key in under two minutes, it lets you tailor the 2020 Warden to the kind of riding you’ll be doing that day. 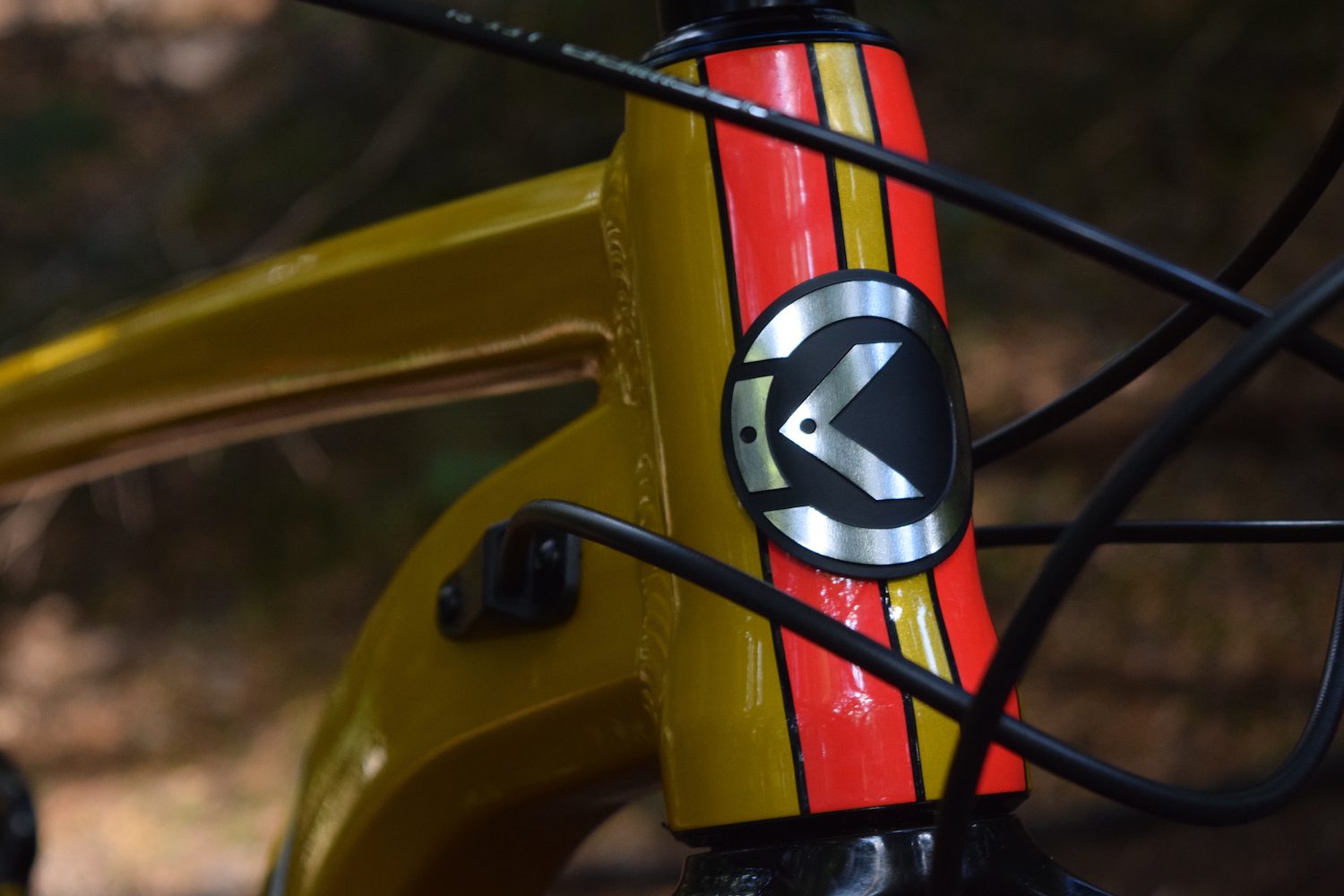 Knolly has built much of its reputation on 27.5″ wheels and aluminum frames. While I really enjoyed the Fugitive LT, I’m sure many riders will be happy to see the smaller wheel size updated with more modern geometry. Here, the Warden strikes a good balance between being aggressive enough to be comfortable with anything you throw at it on the descent, and still being enjoyable to ride when the trail gets less extreme. That can mean climbing or, with the geo adjust, on trails that aren’t only rock faces and high speed sections of roots. Not many riders are lucky enough to ride Whistler every day, and it’s nice to have a long travel, 160 mm bike that is adaptable to all sorts of environments.

2020 Knolly Warden’s are available for pre-order now. The bike comes in four sizes, from small to XL. Frames come in a raw allow finish, black, or the gold shown above (which does look much more metallic gold than yellow in person).