When Garmin launched the Rally platform earlier this summer it was the brand’s first foray into pedal-based power designed for off-road use. After focusing on the road market for years, the new Rally XC 100 and 200 systems added an option targeted at cross country mountain bikers and gravel riders.

Garmin made its first power meter pedal way back in 2013. With nearly a decade of experience, the new Rally XC pedals have come a long way from the early Vector models. After six months of testing, the new Rally platform has proven to be durable and easy to use. With interchangeable pedal bodies, it’s an appealing option for any rider that switches between bikes, including cleat styles, but still wants to train with power all year.

Update: In October, Garmin released a software update to the Rally XC pedals adressing two issues the pedals were having. The update is free to download through the Garmin Connect app – or will automatically update if you’re already using the pedals. Details down below. [This review was published on Sept. 8. Updated Sept. 19] 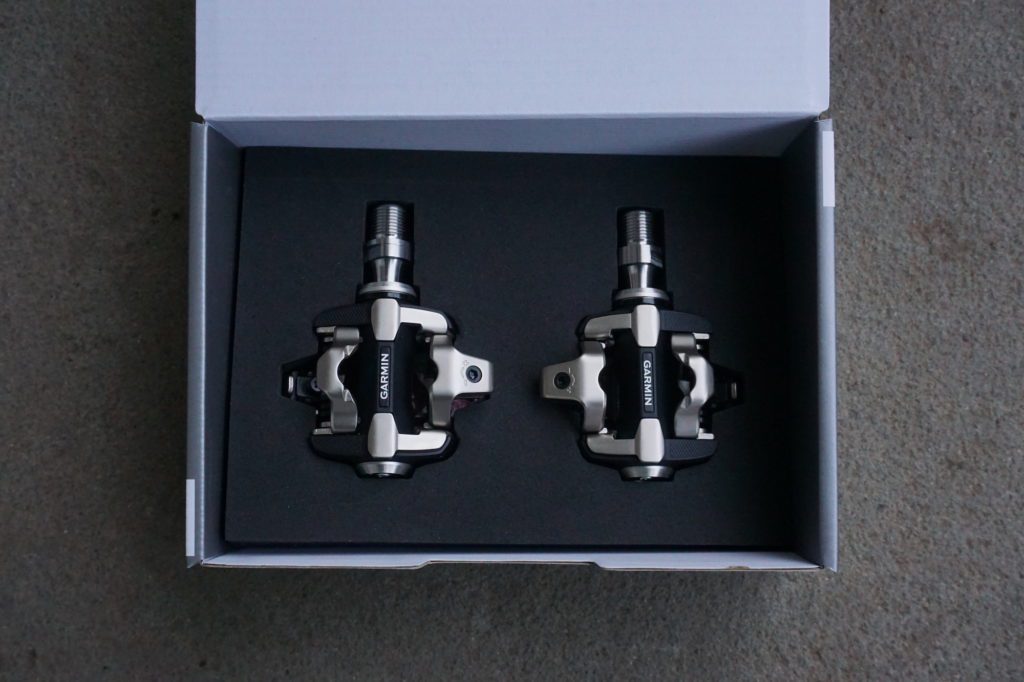 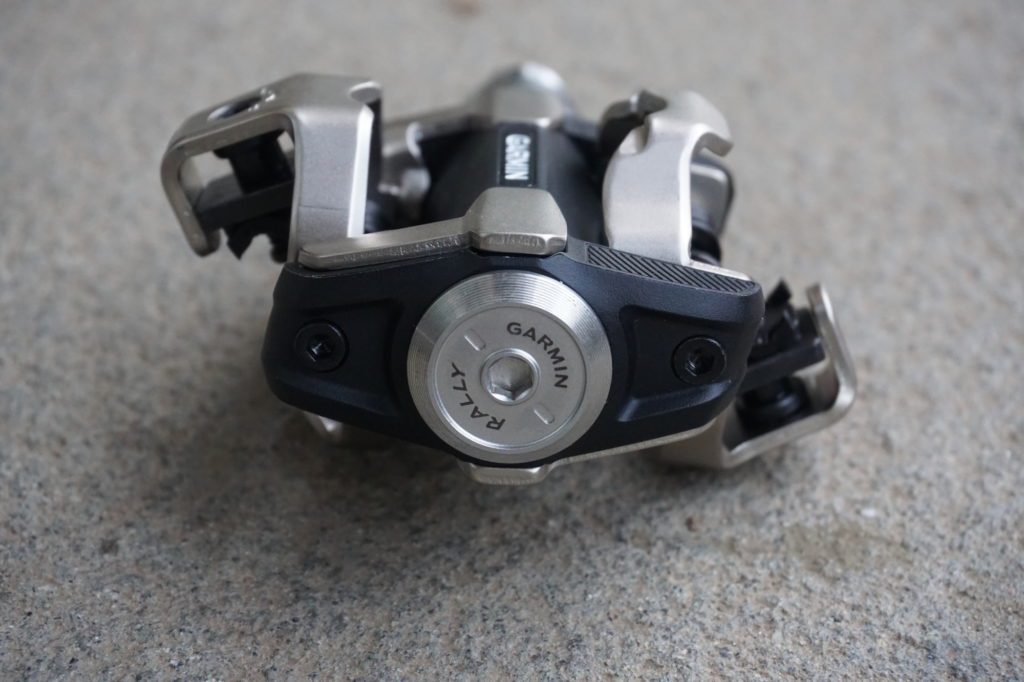 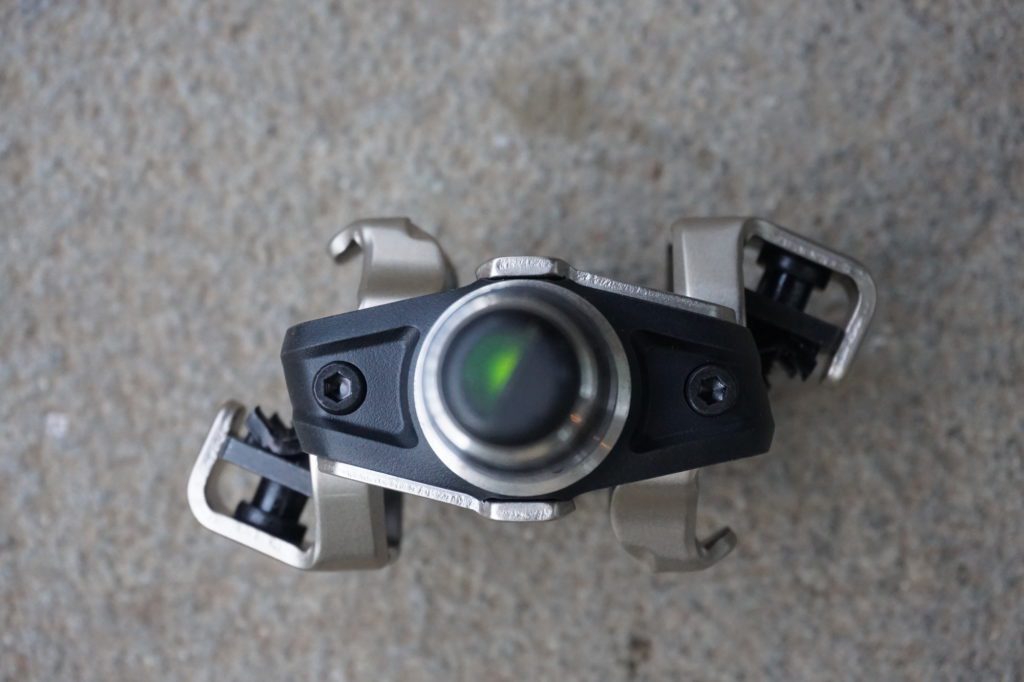 Green means go. Or that the pedals are awake and communicating with your head unit 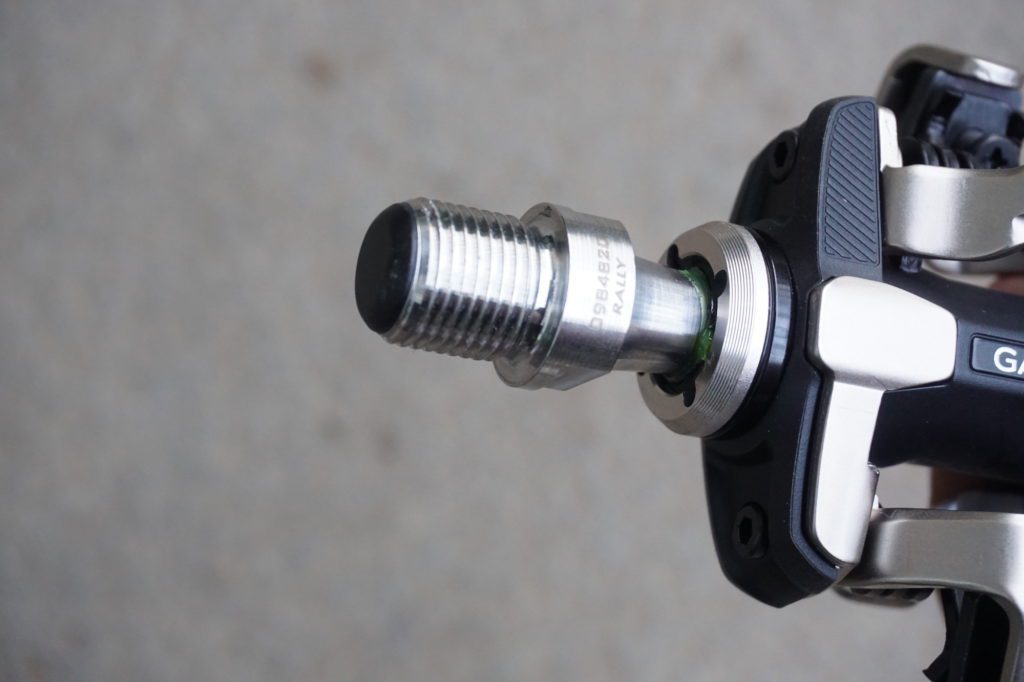 Each pedal has a unique ID so you know you're connecting to the correct set of pedals, not your friends 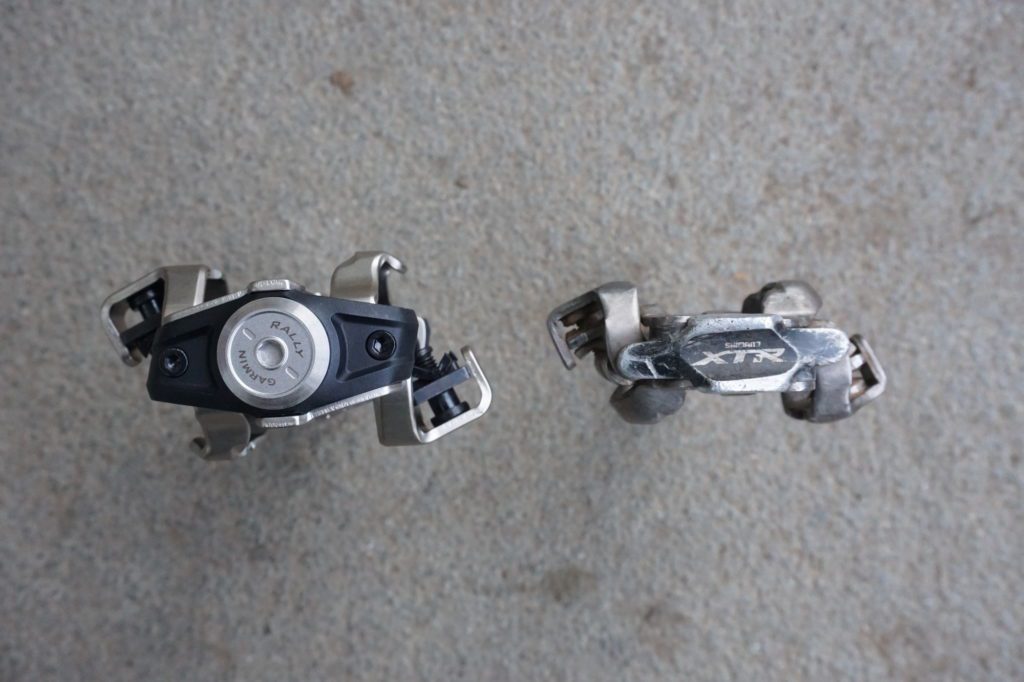 The Garmin's have a slightly taller stack height than Shimano XTR's. Similar to some gerations of XT. 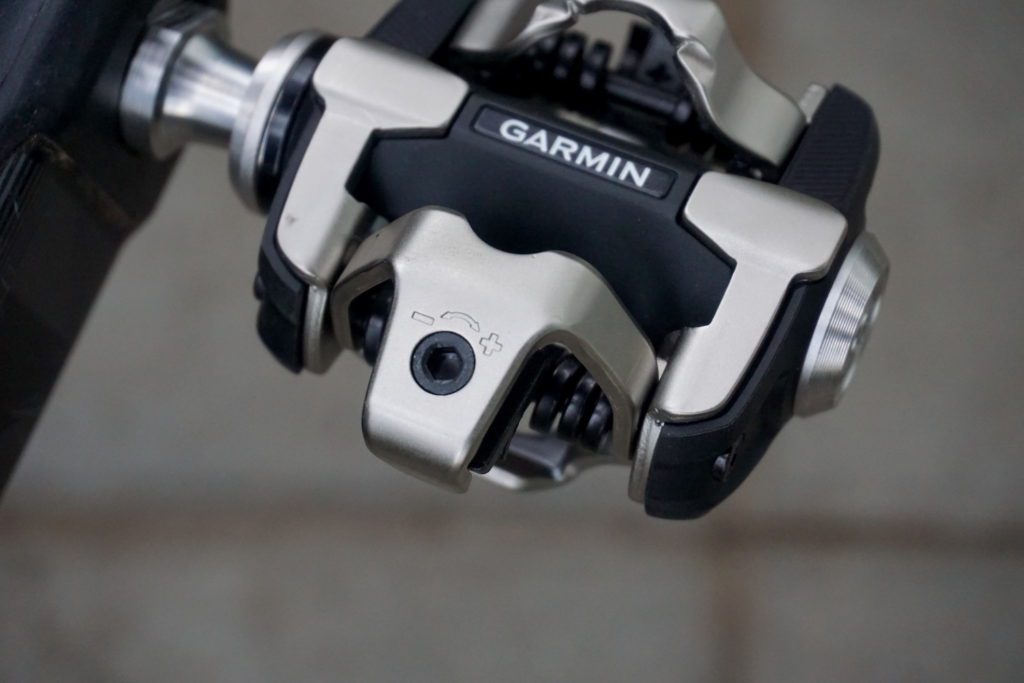 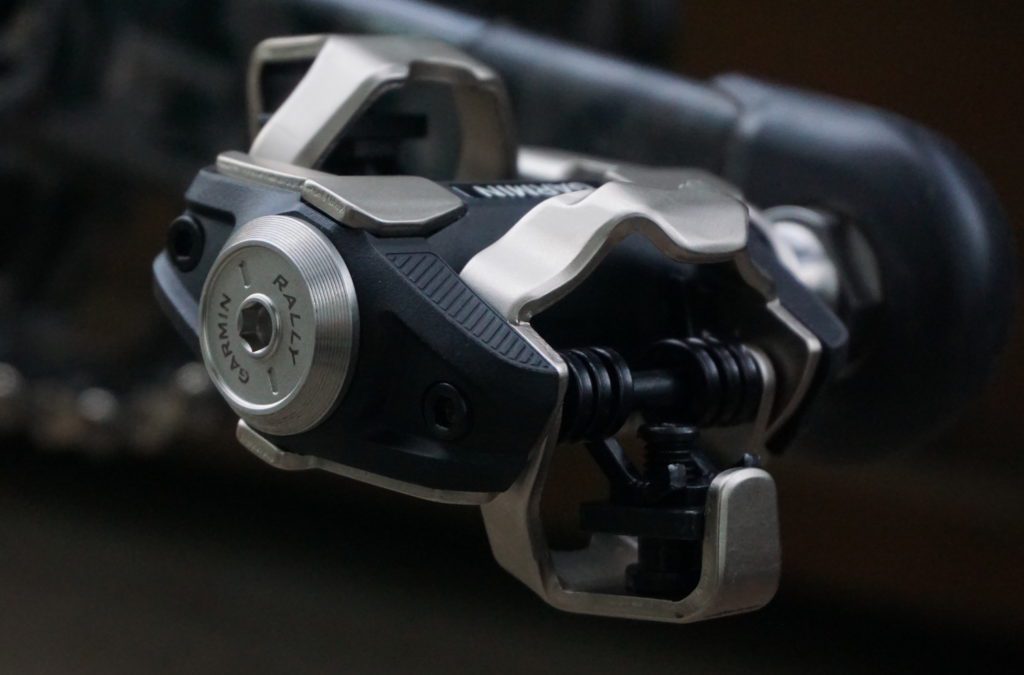 Garmin give's the Rally's a slightly more substantial body than, say, an XTR. It's doesn't add ton of support, but maybe a very little bit. 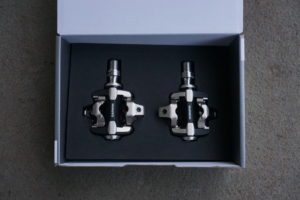 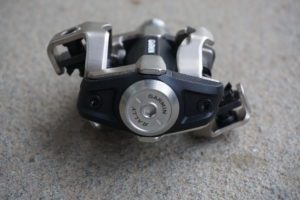 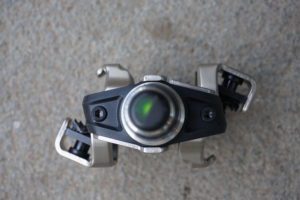 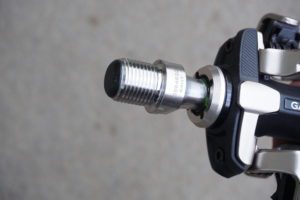 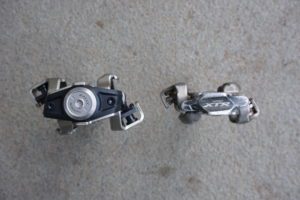 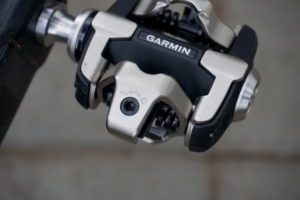 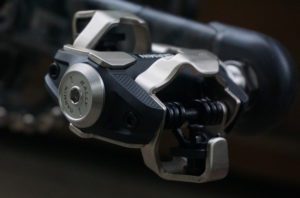 This is Garmin’s first mountain bike or gravel bike-specific power pedal. It uses an SPD cleat, though an interchangeable pedal body means you can turn this into a road pedal (SPD-SL or Look Keo are the two clean options on tarmac). The Rally XC is available as a single-sided (XC 100) or dual-sided (XC 200) power meter. The XC 200 option, which measures each legs power output independently, is tested here.

We covered all the details on the Rally pedals during their launch. The general idea is one pedal that can be used for cross country mountain biking, gravel riding and, with a change of pedal body, road riding as well. Garmin does say they designed the Rally pedals around cross country riding, not more aggressive styles. So the small segment of hardcore enduro athletes who train and race with power will have to look elsewhere. 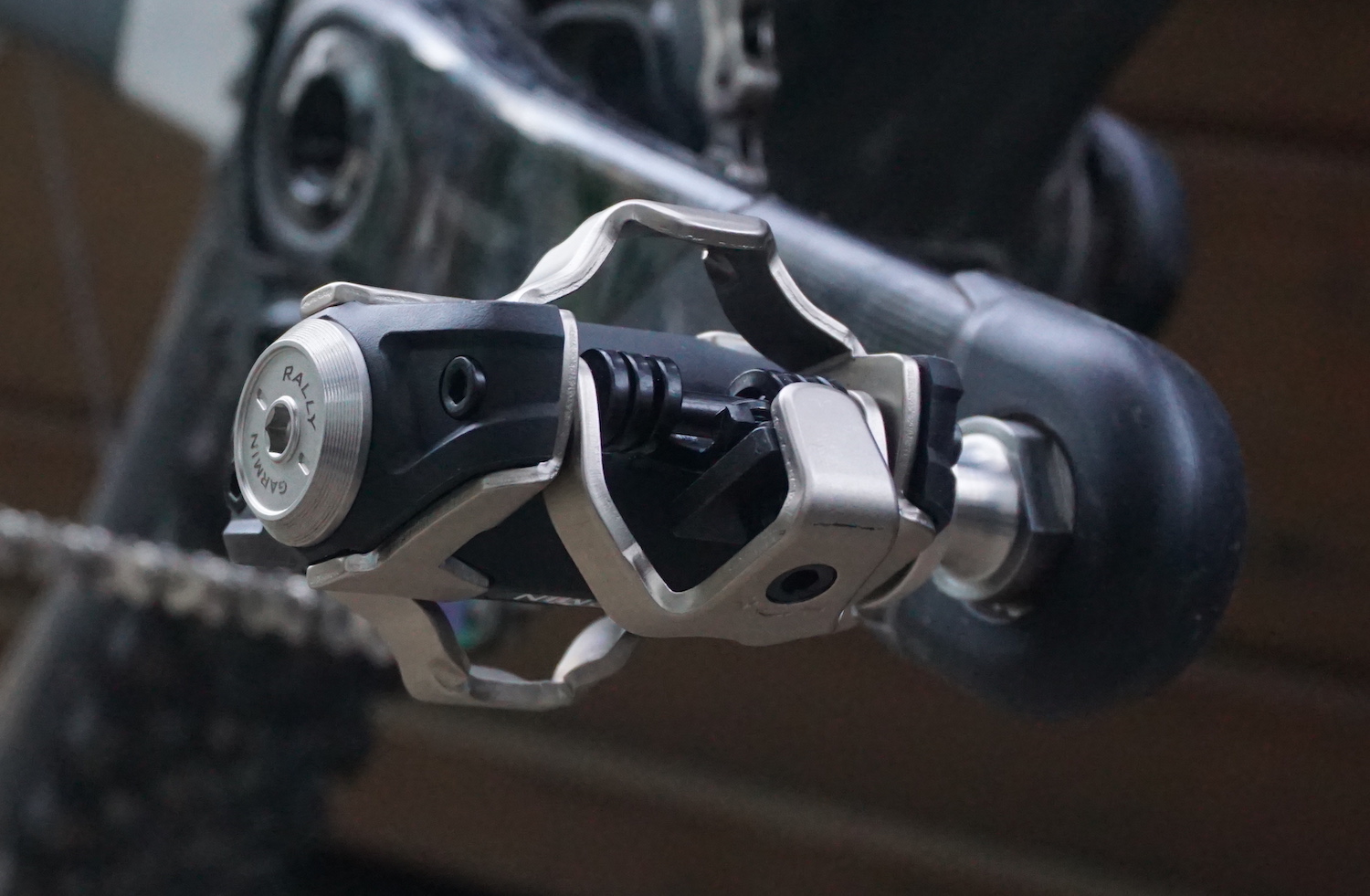 Connections: Setting up the Rally XC 200

Setting up Garmin’s power pedals is impressively simple and quick. This is important, as Garmin is targeting the gravel and cross country audience and expects these pedals to be transferred between bikes.

Both initial setup and switching between bikes is straightforward, even if you’re changing crank lengths between bikes. Thread the pedals on with a pedal wrench (since the electronics are housed in the spindle, a hex key won’t work), calibrate, and ride.

Connecting the pedals with a head unit and calibrating them is quick and simple. As long as you keep the bike and pedals quite still, they connect and calibrate first try. I tested the Rally XC’s with an Edge 530 head unit, Garmin watch and a Wahoo head unit. All paired and calibrated successfully. 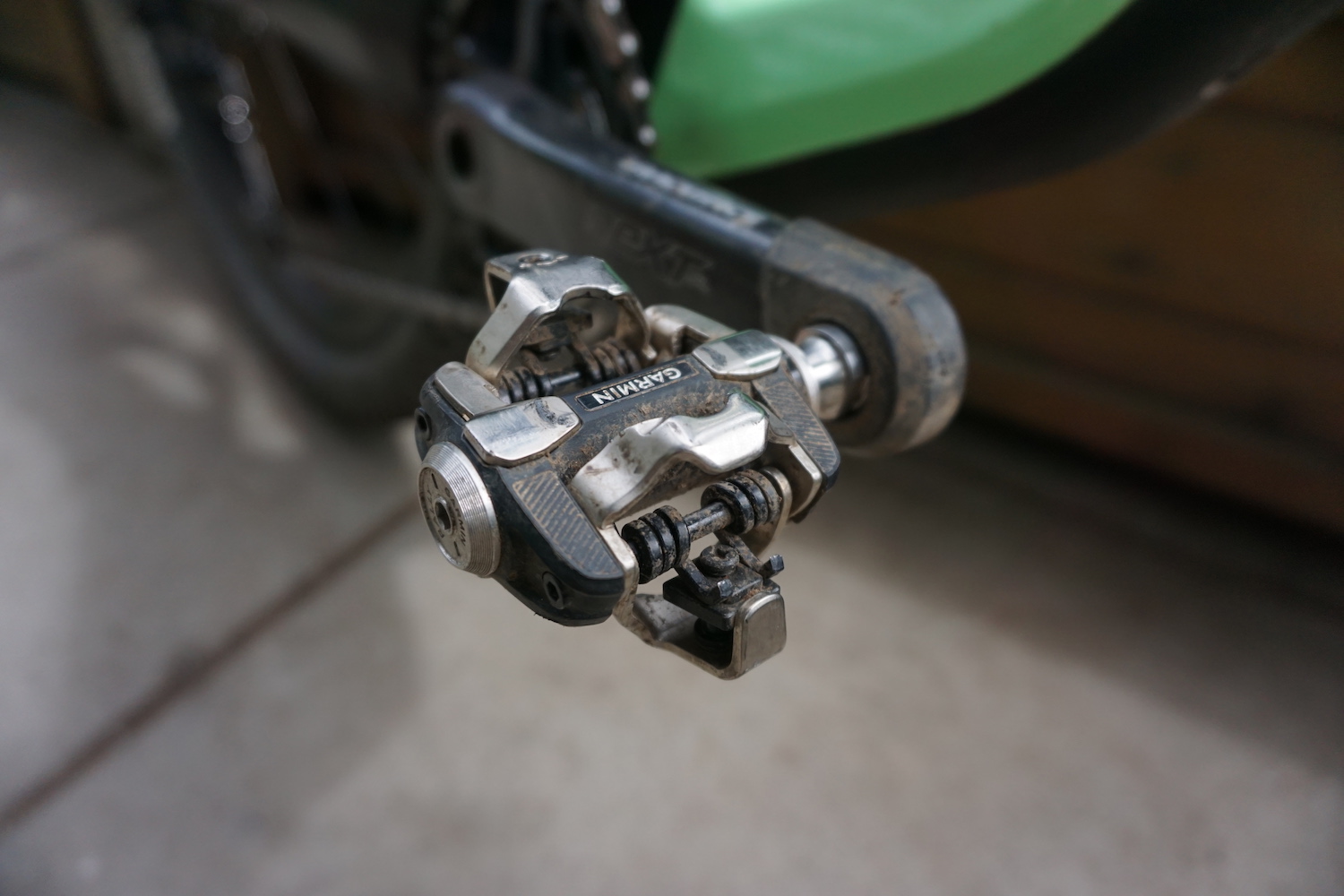 Power to the trails: Riding the Rally CX 200s

Once installed, the Rally XC pedals feel, well, exactly like any SPD pedal should. There’s a good range of adjustment to the cleat tension. It’s clear when you’re clipped in and unclipping is predictable. The platform is a hair wider than a Shimano XTR pedal, and feels solid underfoot. Stack height is 13.5 mm, which is somewhere between XTR and XT, depending on which generation you’re comparing to.

Really, there are no surprises with the Rally XC pedals, and that is a good thing. It makes it easier to switch between other pedals and the Rally’s, as most riders will already be familiar with the SPD cleat system.

As for battery life, the Rally’s hold a charge quite well.  One charge should last 120 hours depending on use, according to Garmin, and that seems accurate so far. 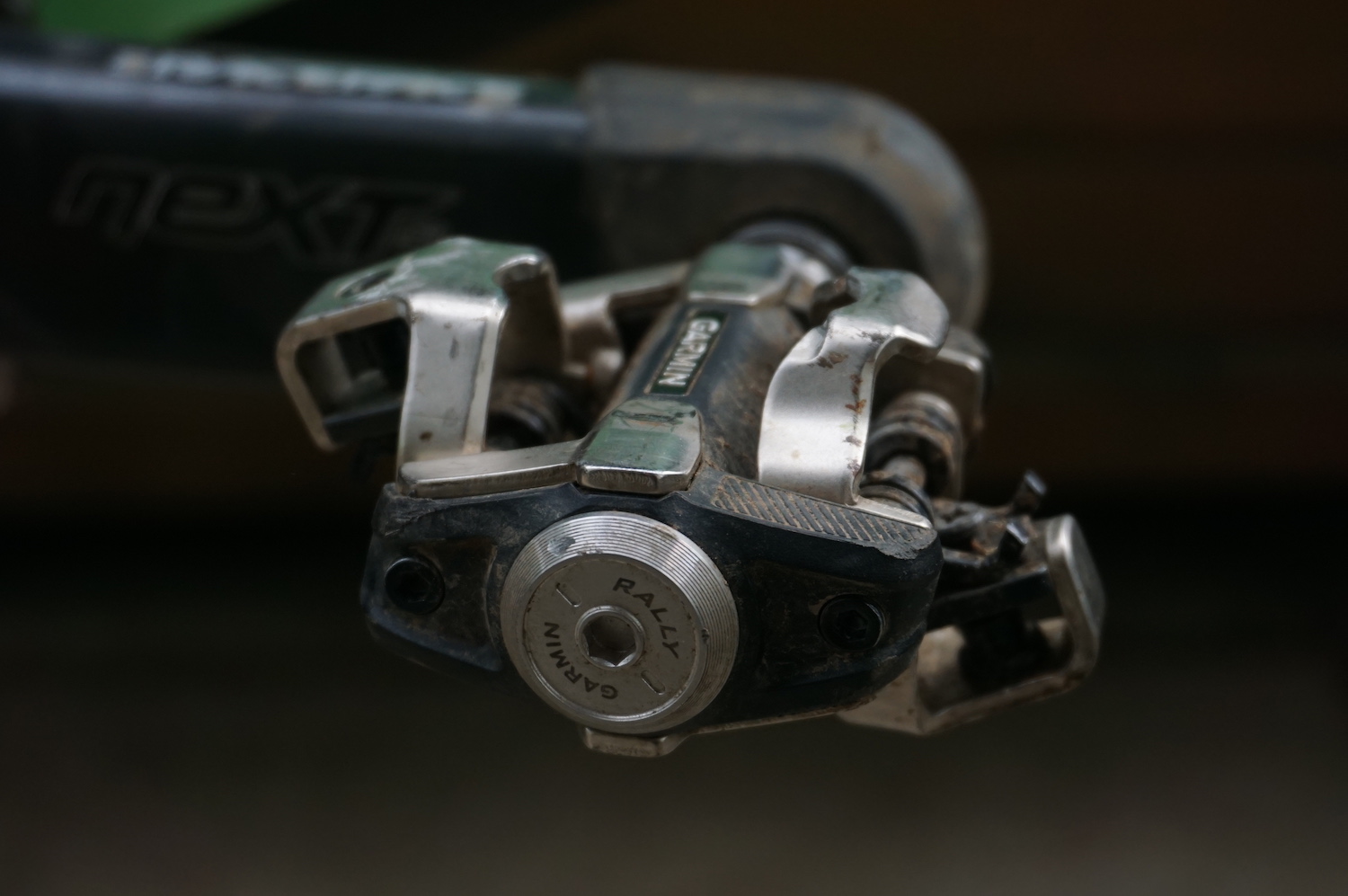 Garmin includes much more than just straight power numbers in the Rally. There’s a huge array of data fields you can select and see live on the head unit with a more detailed breakdown available after on Garmin Connect. The most immediately interesting is the cycling dynamics.

Cycling dynamics goes beyond showing how much power each leg is producing to show power phase  (where in the pedal stroke you’re applying power), and peak power phase (where you’re applying the most power). All of this shows up, on Garmin head units, as a full colour live graphic that gives you feedback while you ride. Garmin also measures platform center offset, where on the pedal – inboard, center or outboard – you are applying power.

Having these cycling dynamics was more interesting than I thought. I learned that I pedal centered when riding hard, but one leg is off-center when spinning easy. I was also able to change my cleats to help get my foot properly centered on the pedal (which helped alleviate some lingering knee pain). Seeing where in the pedal stroke I was applying power, and where I was applying the most power, is fun, though I’ll admit I haven’t done much with it yet.

You can also get quite a bit more information when you look at your rides on Garmin’s Connect platform. The power and cycling dynamics are automatically broken down into all kinds of narrower fields (standing power, seated power, l/r balance, power phase, peak power phase, and numerous others, all by lap as well as ride).

The only cycling dynamic I didn’t find particularly accurate was standing vs. seated time. It really only accurately shows the amount of time you spend pedalling while standing. All other ride time – including standing while descending – is rolled into seated time. It doesn’t impact seated power metrics, but it would be useful if Garmin could devise a way to get a third category of inactive moving time to cover time spent moving but not pedalling. 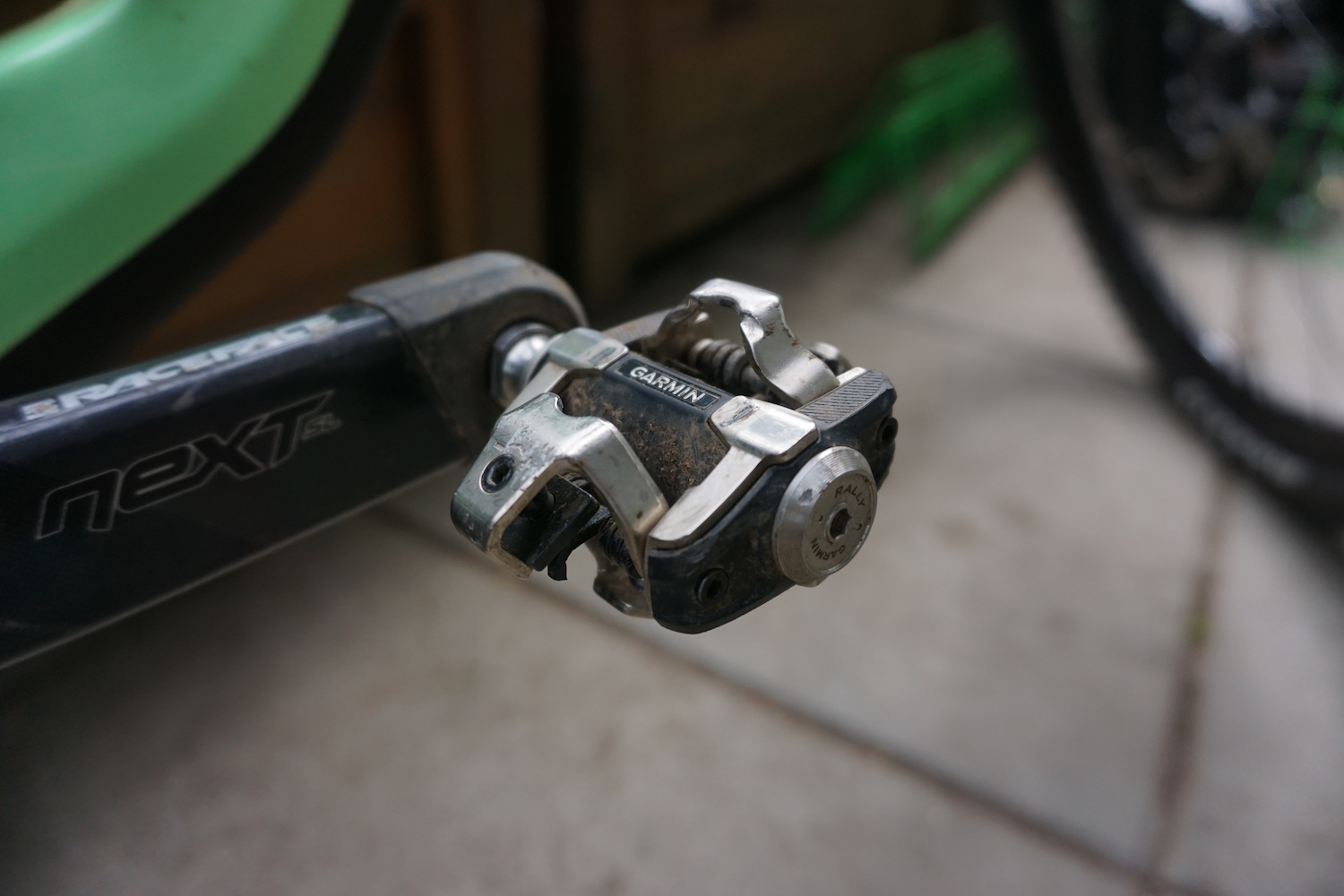 A big question when the Rally pedals were released was around durability. The pedals are a solid 444 grams for the dual-sided version and Garmin says the focus was on durability, not hitting a low weight. That decision pays off on trail.

At this point, the pedals have been tested in all weather, on trails and some gravel. I accidentally exceeded their cross country intended use for several rides before I clarified that with Garmin, so they’ve been pushed beyond what they were designed for, too.

Over six months, I’ve bounced the Rally XC’s off numerous rocks, not on purpose, and roots, again not on purpose. They’ve seen action in thick mud and rain as well as over a very dry, dusty summer here in B.C. Both in function and appearance, the Rally’s are doing just fine. One battery cover has a small scratch, and there are some small scratches to the pedal body. These are on par with, or better than the standard wear I’d expect from any other non-power pedals. In terms of data, the pedals are still reading predictably and consistently.

While I’ve been quite impressed with the Rally XC pedals overall, there are a couple small issues. Both are on the data side. Garmin is aware of both and working on updates.

Power spikes. The Rally pedals seem to deliver reliably accurate power numbers. Based on what my co-worker found in her review of the Rally RS200 pedals, they compare well with other pedals on the market. One issue I did have is occasional power spikes when riding on trails. These tended to happen when transitioning from coasting downhill to pedalling flat or uphill, when I spun at a higher before catching up with the bike. The power spikes are momentary, less than a second, and infrequent, and usually accompanied by the pedals reading cadence much higher than actual cadence. It’s also an issue Garmin is aware of, and is working on an update for. I didn’t see these types of spikes on the road or on gravel.

Update: As mentioned above, Garmin’s released a software update for the Rally pedals. I’ve had a couple of weeks riding the pedals since updating, both mountain biking and a couple of horrifically wet and muddy cyclocross races. I haven’t had the same mis-reading of cadence or power spikes. The pedals are reading consistently and predictably. It is great that Garmin were able to not only fix the problem, but make the update so easy to perform.

Dropped power. When I was using the Rally XCs outside their intended use they did drop power on one foot a couple times. Both times, stopping and re-calibrating resolved the issue. Both times involved significant features that you would not find on a cross country course and which other parts of most XC bikes would not be happy riding, either.

Since staying (mostly) within the limits of XC, I haven’t had that problem again since. Even with several less-than-perfect landings and numerous rock and root strikes at speed. There were no problems on any gravel or road rides. 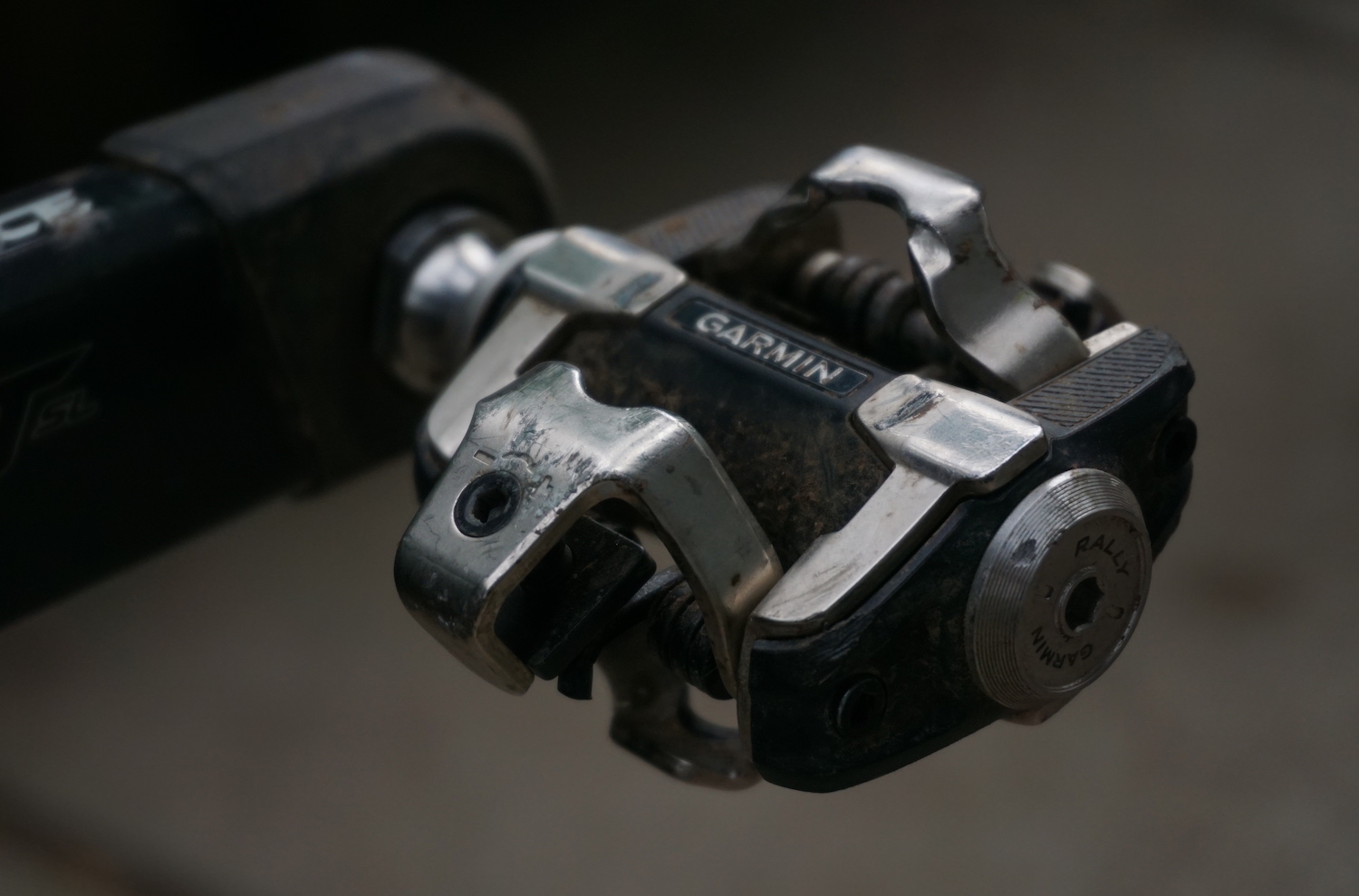 Garmin’s Rally XC 200 pedals are durable, accurate aside from very occasional spikes – which seem to have been resolved – and easy to use. There’s a wide range of data collected and displayed through a head unit or Garmin’s Connect platform. With limited pedal-based power meters available for the off-road crowd, these are an excellent option for anyone looking to add power to their cross country training.

The main appeal of the Rally XC pedals will likely be for riders that want to use power on multiple bikes. You can switch easily between gravel, cyclocross and mountain bikes, with little fuss. Add the occasional switch between SPD and SPD-SL or Look pedal bodies, and the Rally platform is an excellent option for anyone looking to mix off-road training in with paved miles without giving up power data.

At $1,560 for the dual sided Rally XC200, Garmin’s power pedals aren’t inexpensive. But they are on par with other XC focused pedal-based power options, like SRM’s X-Power pedals. When you factor in the extra pedal body option, which is adds $325, you are getting two pedals in one. If you use that feature, it improves the Garmin’s value. 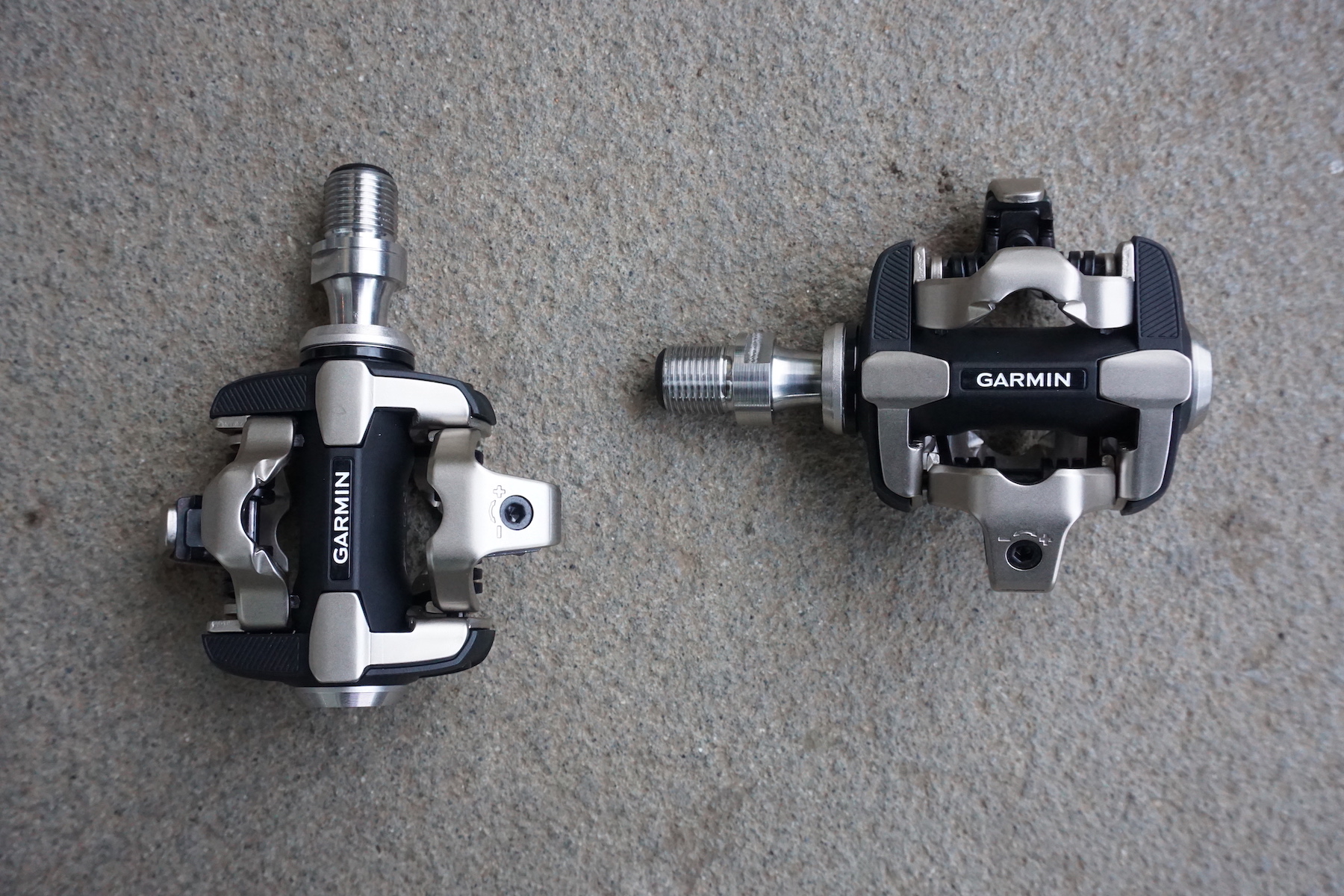 The Rally XC pedals and all available pedal body options are available now from Garmin and retailers.