The final day of Mont-Sainte-Anne’s third UCI Mountain Bike World Championships started by shining the spotlight on the next generation of downhill racers.

Lucas Cruz came was a razor thin margin away from landing Canada it’s first medal at home. The Pemberton rider was o.01 seconds off third place at the end of juniors racing. He wasn’t alone at the front of the race, either. Four Canadian’s finished inside the top-10.

Canada’s junior women were having an equally dramatic day, but with their luck trending in the opposite direction. Bailey Goldstone was involved in a hard crash, holding up both of the other Canadians race runs. Both were given re-runs, but after the heavy start to the day, Amy Ertel’s 11th was the top result.

Canada’s juniors once again wrote their names all over the top-10 placings at Mont-Sainte-Anne, putting four riders in places four through ninth.

A medal for the home crowd remained elusive, but by the narrowest of margins. Lucas Cruz was 0.01 seconds behind third place Tuhoto-Ariki Pene, finishing fourth as the top Canadian. 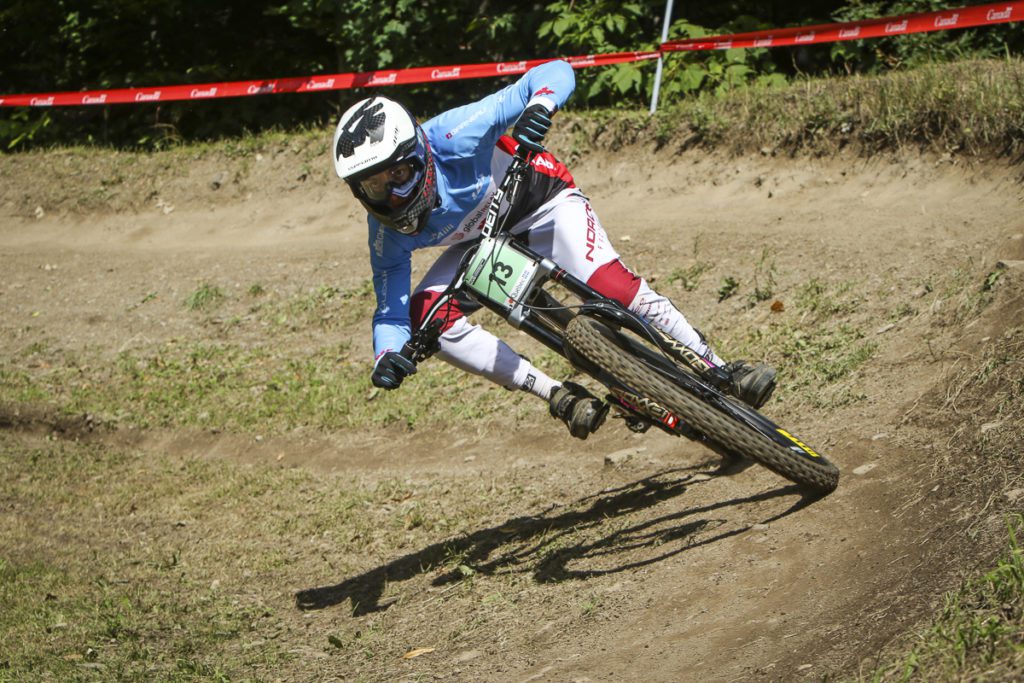 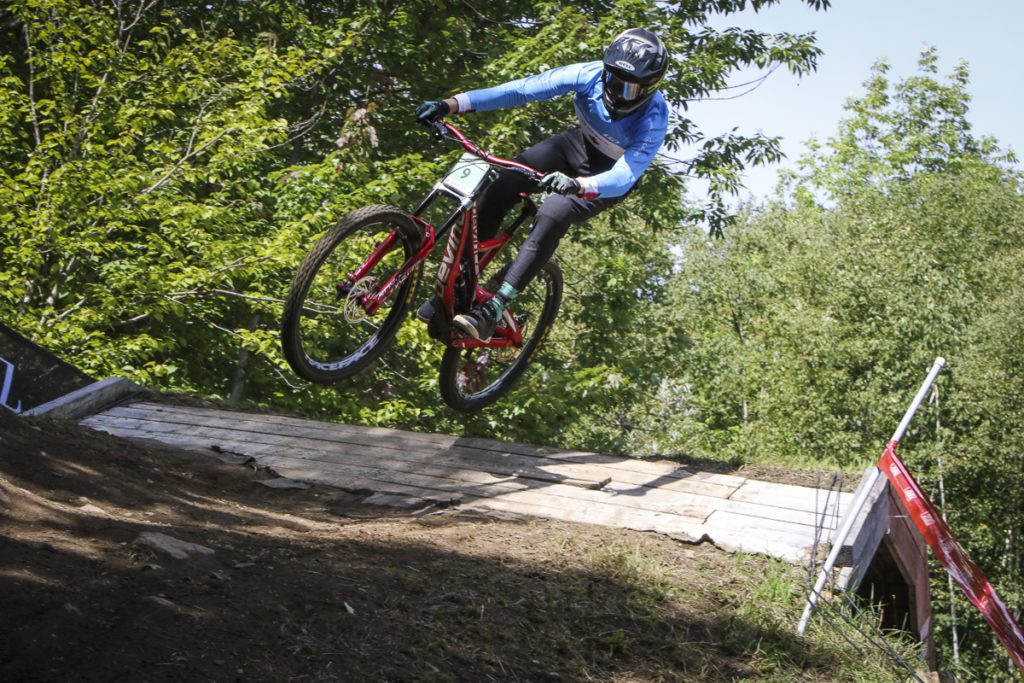 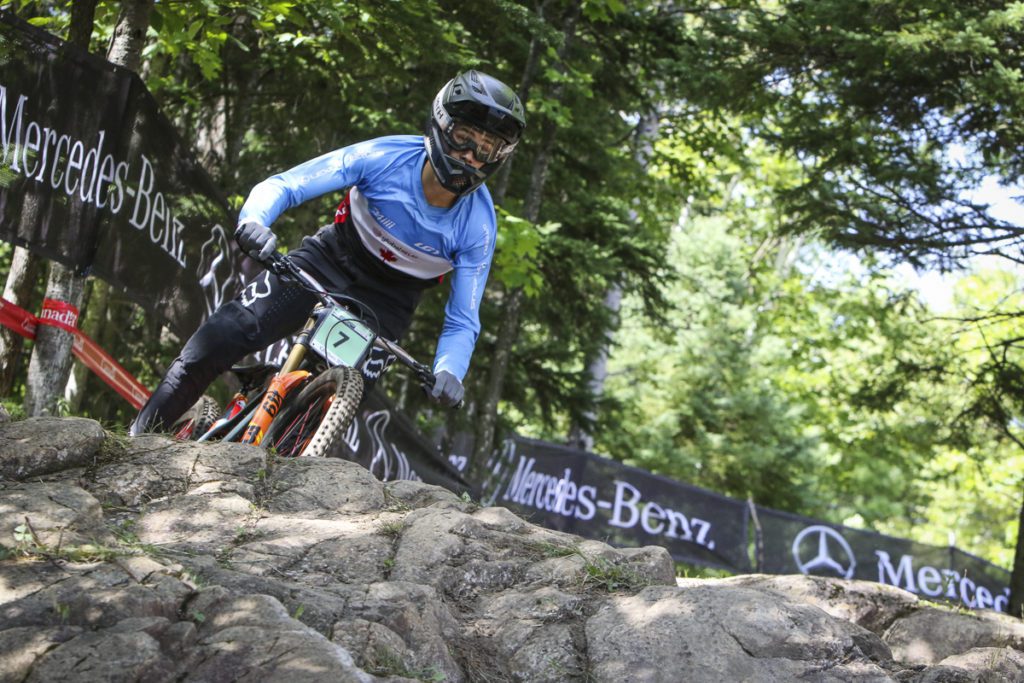 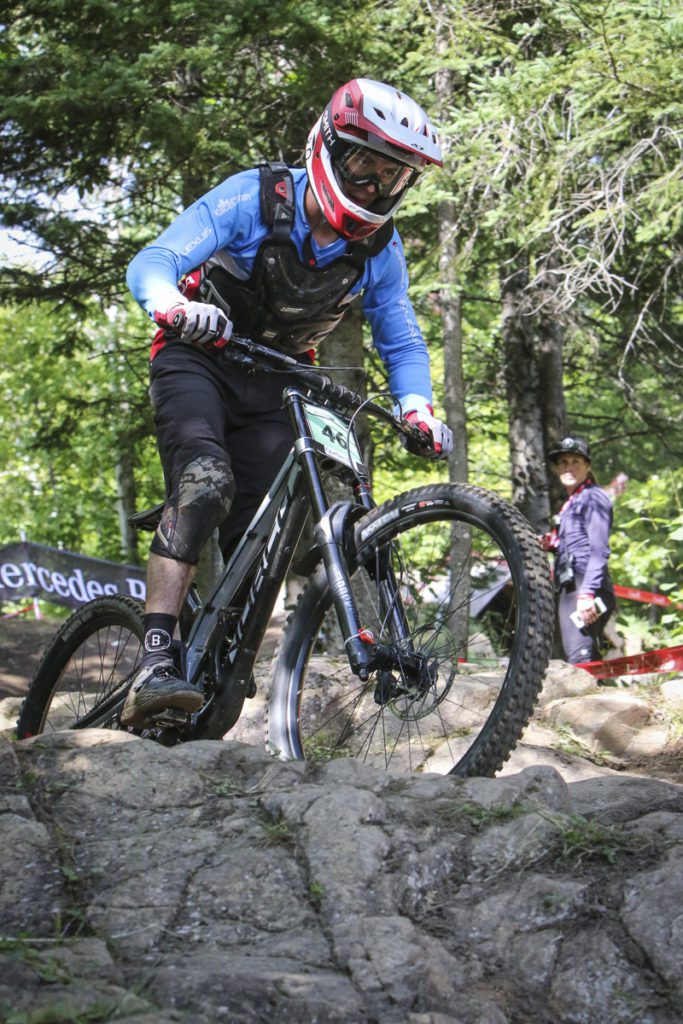 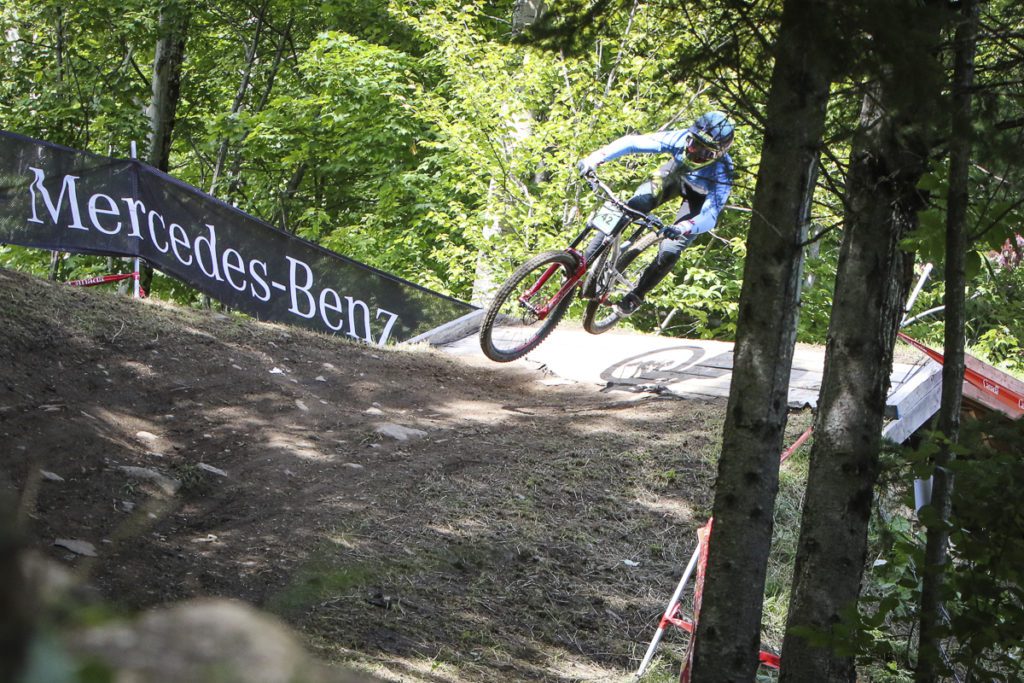 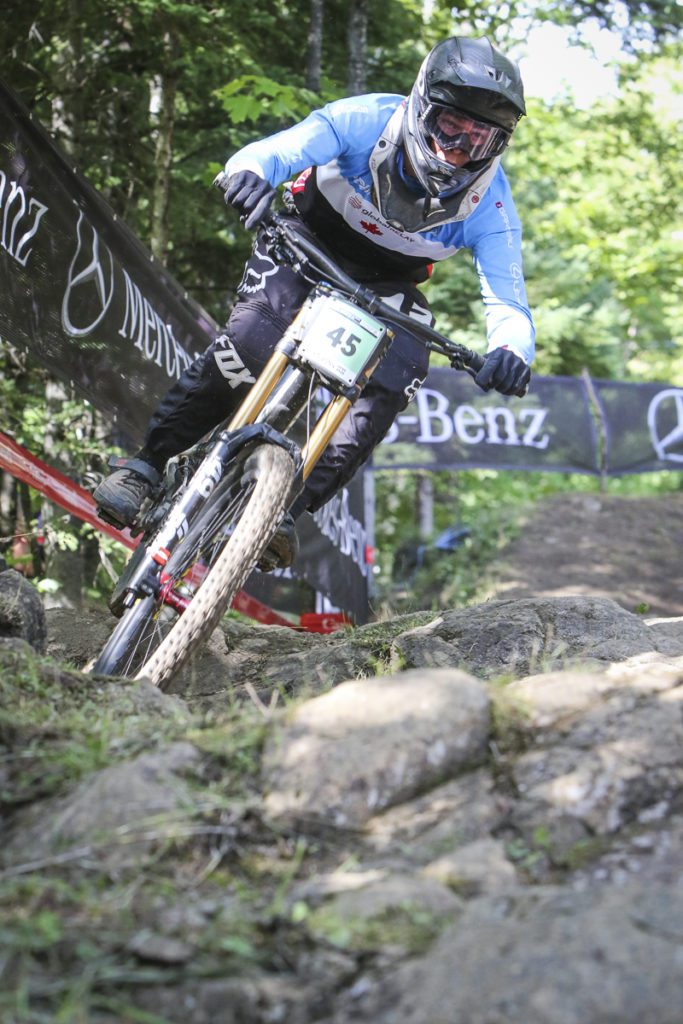 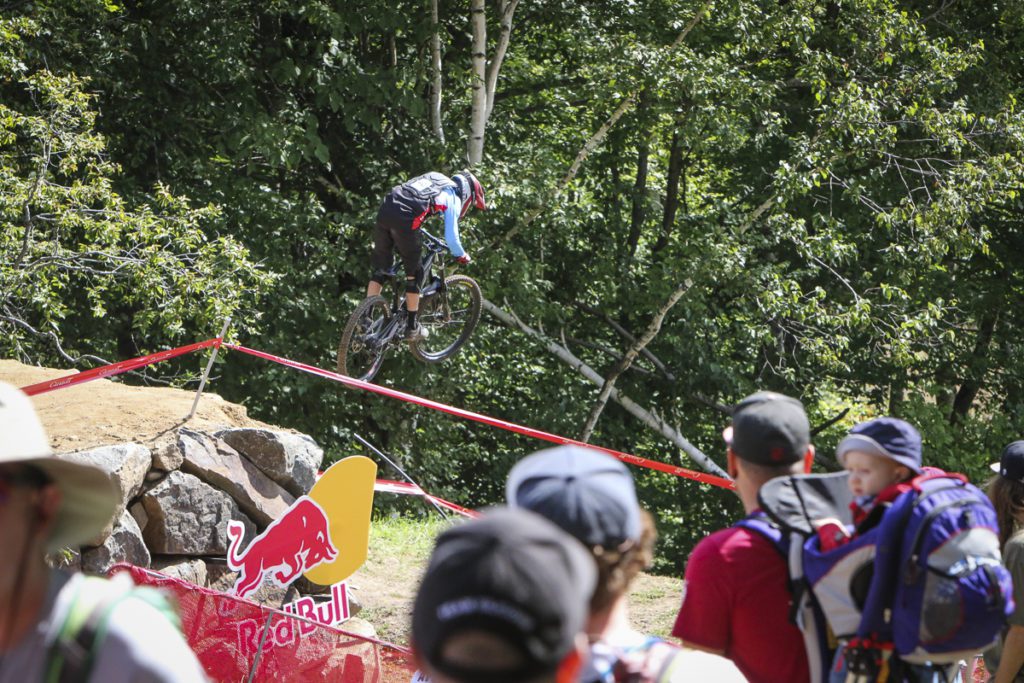 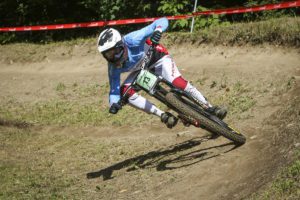 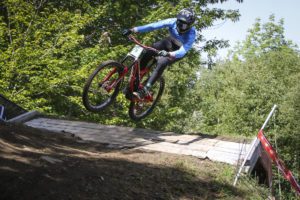 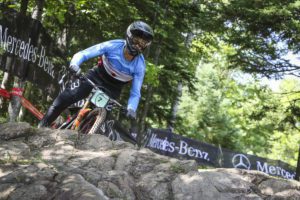 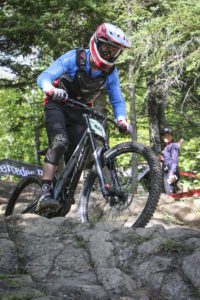 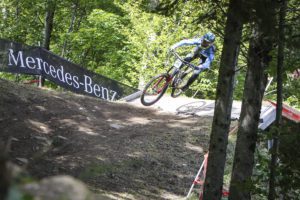 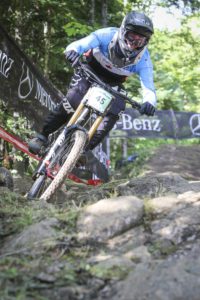 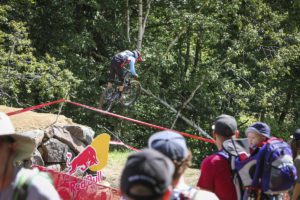 Elliot Jamieson, third last year at world championships in Lenzerheide, was the next finisher for Canda in sixth. He was followed by Patrick Laffey in eighth and Seth Sherlock in ninth.

After wining two World Cup rounds in 2018, and medalling in several more, Kye A’Hern was without a win so far in 2019. The Australian ended that win-less streak at the perfect time, taking the junior men’s downhill world championship title at Mont-Sainte-Anne.

The young rider was quick to acknowledge the role of his Canyon Factory Racing team in that success. “Troy, Mark and Magnus, to the team managers, everyone plays a part.”

Perhaps this weekend more than ever, with how A’Hern’s race played out. The Australian was behind at every split on course, but crossed the finish line in the lead. The key, A’Hern said, was what he’d been coached through by his older teammates in practice that morning.

“I had made a couple small mistakes at the top, so I knew I had to do something bit at at the bottom. This morning the boys helped me with the “Greg Minnar Gap,” to get over a big hole that other people would have to ride through,” said A’Hern, of hitting the big rock gap pioneered by the legendary South African. “I did that only once this morning in practice and … it was great. It definitely paid off and gave me that second or so I needed.

Indeed, the burly move appeared to be the difference, as A’Hern crossed the line to green light, and the world championship title.

The win turns around what’s been a long season for A’Hern. The young Australian again pointed to his team, and specifically the work of Gabe Fox in helping him to the result. 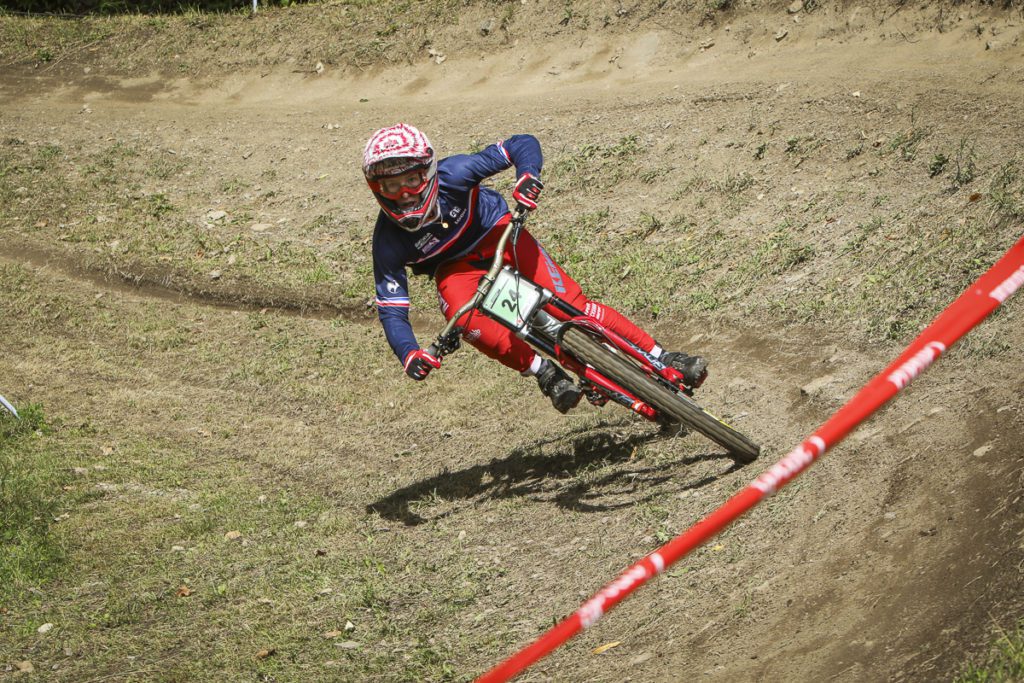 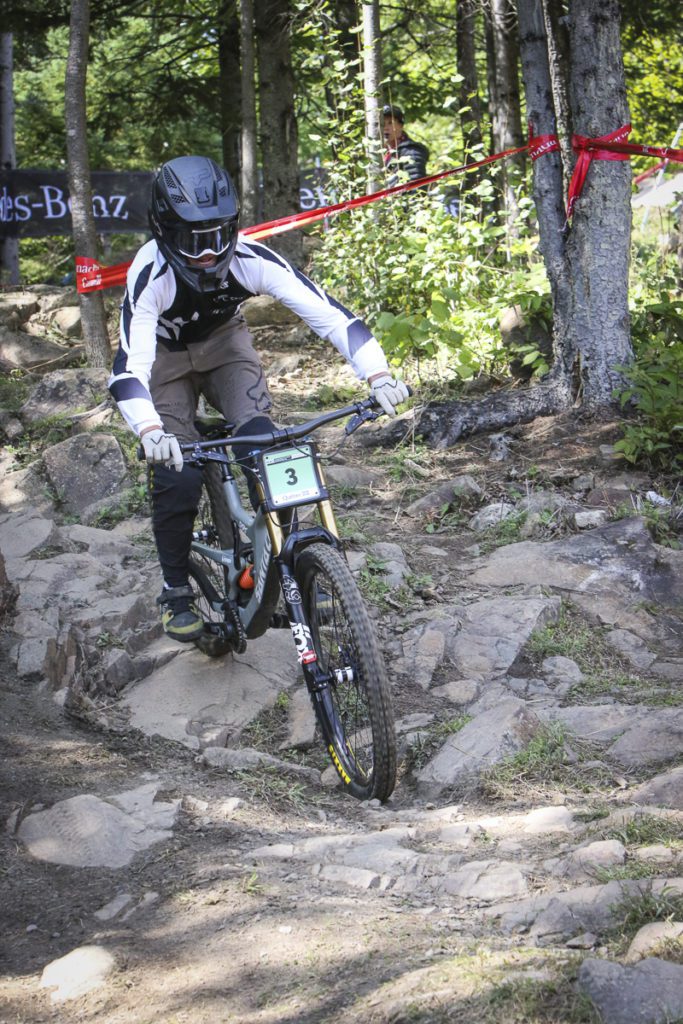 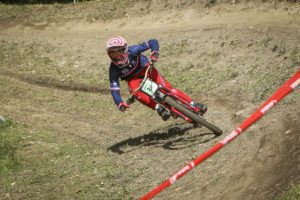 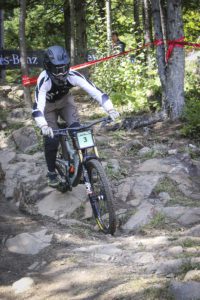 “It’s been in interesting season, with a lot of new people and, as we’ve seen, a lot of first time winners. I think it’s a matter of not giving up, continuing with doing everything right, and just keep on pushing.” As for Fox, A’Hern says “He plays a massive role. he takes all the stress off, so all you have to focus on is just you and your riding.”

Fox’s work isn’t limited to the Factory Team, either. When second place junior woman Anna Newkirk cracked a frame in practice, Fox stepped in to get the American a bike to race on.

In second place, French enduro racers Antoine Vidal, moonlighting on the downhill circuit to gain experience for his day job. Asked if he might consider a switch after the unexpected result, Vidal responded coyly, Yes, maybe one day.”

Canadians had a rough morning at Mont-Sainte-Anne. Bailey Goldstone, the first rider on course – had a heavy crash. Several riders already on course were caught behind the crash, including Madison Skrypnek and Amy Ertel.

Skrypnek and Ertel were among the riders given re-runs and sent back up to the top. Ertel crossed the line 11th. Skrypnek’s bad luck continued, and appeared at the finish line later with a flat front tire.

As much of the year has been, world championships was a three way battle between Norwegian Millie Johnset, Anna Newkirk and the dominant Valentina Höll. At the most important race of the year, Höll was giving no quarter. The Austrian won by a 12.98 second margin.

Since she started winning junior races last season, the talk has been of how Höll will fare when she moves up to race elite. All three medallists at Mont-Sainte-Anne graduate to the elite ranks next year. It’s something that the trio have already been talking about.

“To be honest, I was always thinking about elite this year,” Höll said after the race. “We’ve all been talking about that. Now, we know if we have a bad week, we can probably still be on the podium. That won’t be the same next year.”

While Höll stays in the under-23 ranks at World Cups, she recently had her first swing at going head-to-head with the pro’s. The Austrian raced the Air DH and Canadian Open DH at Crankworx Whistler just weeks before world championships. Asked how her first races went, the junior immediately smiles:

“It was super exciting! You’re in the start gate riding next to your heroes. When you’re warming up, they’re all right there beside you.” It would be hard to say any result would be surprising given her success so far, but Höll’s second place still caught some off guard. “I was just 0.63 seconds off Tracey Hannah, and I don’t think Tracey was expecting that, so it was really exciting.”

Clearly, we will be seeing more of the Austrian in years to come.