The inaugural Merritt Crown saw 40 riders sign up to take on the massive challenge. Anne St. Clair and Dave Cleveland were the top woman and man in the race, earning their titles as Queen and King of the Crown.

Cleveland travelled from Penticton, B.C. to set the fastest time on hot day in the hills. The new King of the Crown rode for 8 hours 50 minutes through 30 degree summer heat to earn his title. Cleveland finished 13 minutes ahead of second place finisher Greg Taylor of Coldstream, B.C.. Vernon’s Dylan Schuetze followed in third, another 22 minutes later.

After the extended tour of Merritt’s four peaks, and four trail networks, Anne St. Clair of North Vancouver, B.C. was able to eek out a three minute advantage over Amanda Racher of Salmon Arm, B.C. The two finished in 11 hours 39 minutes, and 11 hours 42 minutes.

While the winning times are impressive, just covering the 120 km distance within the 12 hour cut off time was a huge challenge. With hot summer temperatures pushing well into the 30’s by mid-day and some huge elevation gain to overcome, many riders were racing to finish.

21 riders made it back under the time limit. For their efforts, each earned their own commemorative crown.

The event raised $500 for the Merritt Mountain Bike Association. The Queen and King of the Crown each were awarded $200 for their effort.

Organizers Darch Oborne and James Oborne are already looking forward to bringing the Merritt Crown back for 2020. Among the changes will be adding aid stations, instead of having riders self-support for the whole distance. They’ll also be adding more check points and adding racer tracking for the massive, and wide ranging race course.

Full results for the 2019 Merritt Crown mountain bike marathon are below: 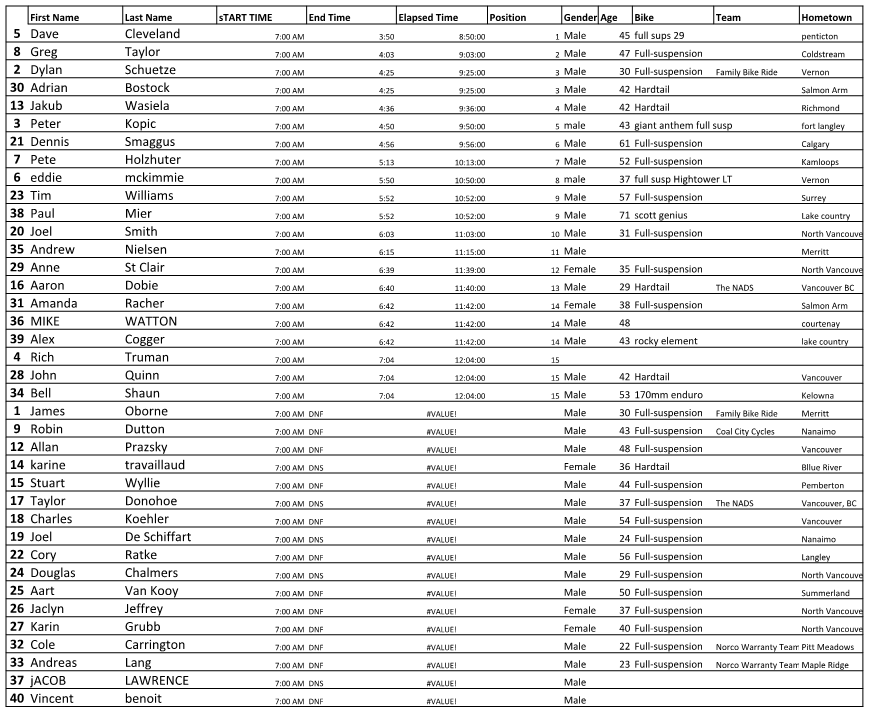