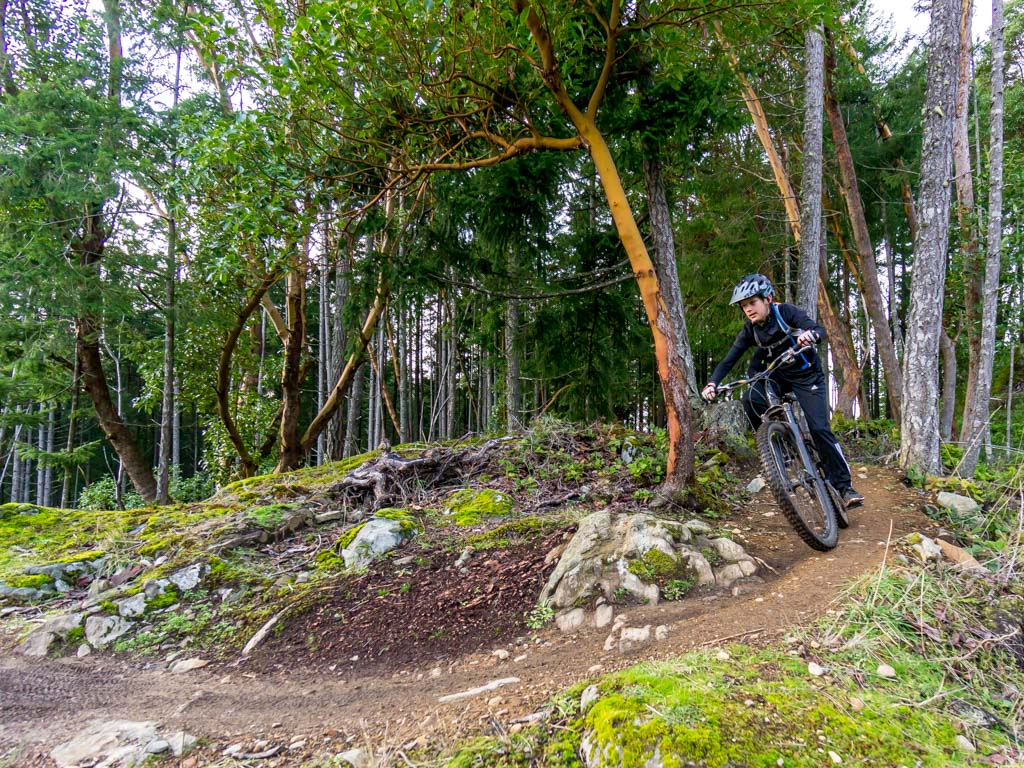 On Maple Mountain, in the lower Vancouver Island town of North Cowichan, Xylem, a purpose build climbing trail, carries riders on a winding path up through arbutus and garry oak groves before dropping them out on a rocky bluff at the top of the mountain. From there, after taking in views across the lower Gulf Island, riders drop into Maple Syrup, a classic local all mountain trail connecting steep rocky features with bermy corners, punchy climbs, and several woodwork features artfully constructed by local trail builder, Riley McIntosh. It’s roughly the same system at work in a maple tree, where xylem, part of the plant’s vascular system, carries sap up from the roots into the trunk of the tree. In a process familiar to most Canadians, the trunk is then tapped, sending sap flowing out of the tree to be turned into maple syrup. Like turning sap into syrup, Maple Syrup trail will make you work, but it is absolutely worth the effort.

The Xylem climbing trail is one large piece of a long-term plan put together by the Cowichan Trail Stewardship Society (CTSS) to turn Maple Mountain from a disconnected set of rogue trails into the sort of network that could attract larger races, such as the BC Bike Race (BCBR) mountain bike stage race, and the increased recreational tourism that comes with that sort of event. That project will pass a major milestone this summer, when North Cowichan hosts the opening day of BCBR. Watching riders from countries around the world get their first taste of B.C. singletrack will surely be a gratifying moment for CTSS and for local riders, many of whom have put numerous volunteer hours into building and maintaining the trails. Before any of this could happen, though, the first step was gaining permission for the trails to exist at all. 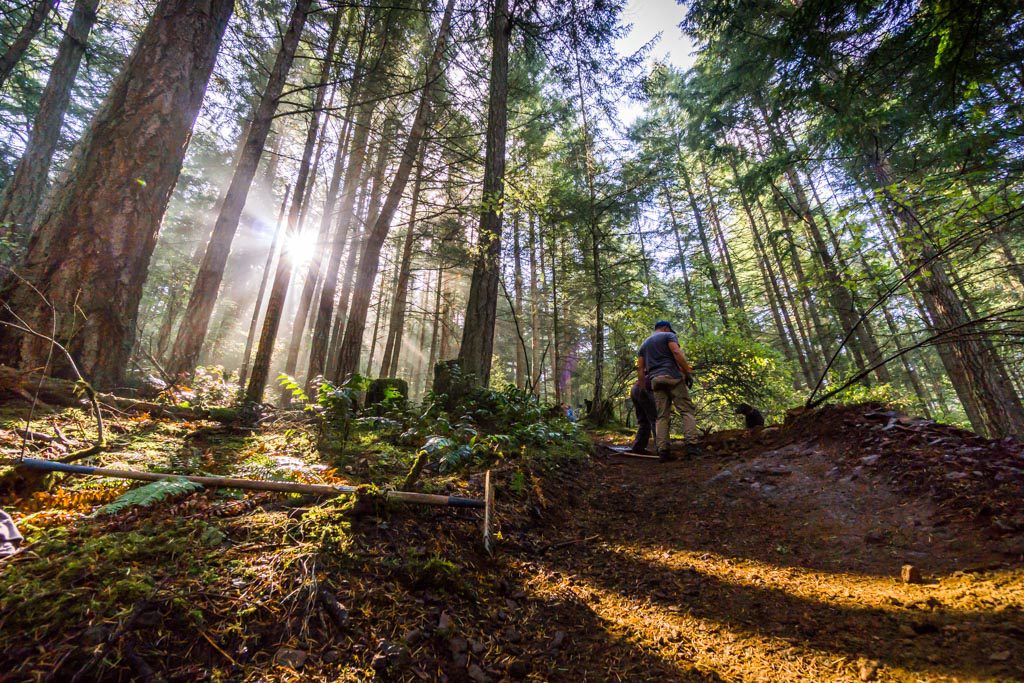 Maple Mountain sits on one part of North Cowichan’s 5,000 hectares of municipal forest, a working forest managed by the municipal council. The first step in establishing a lasting trail network was gaining a licence of occupation, which would grant a legal right to build and maintain trails on Maple Mountain. CTSS was formed in 2013 as part of that process and, once the licence was granted, CTSS immediately set to work. Riley McIntosh, part of the initial push to establish CTSS and already a well-known trail builder whose work had featured in New World Disorder series movies, became one of the main builders for the Society’s first trail project: refurbishing Upper Maple Syrup. Originally created by local builder Trevor Prest, the trail was updated and extended down to meet with trails at the bottom of the mountain.

Having established one, continuous trail from the summit to the parking lot, CTSS’s next project was to make accessing Maple Syrup easier, and more fun. This meant creating an alternative to the punishing steep pitches of the main logging road, which runs all the way to a radio tower at the peak. Enter Xylem. After being mapped and laid out by CTSS’s first president, Robin Kenyon, the trail took two full years to complete. Numerous volunteer trail days, along with the efforts of McIntosh and Linden Feniak produced the lower sections, while Xylem’s upper sections were completed by local builders Trevor Thew and Nic Rodgers. All finished, Xylem is a little more than 6 km of winding, rolling singletrack. It’s also almost entirely handbuilt. A machine helped push through one small section of cutblock low down, but Xylem is otherwise entirely shovel-and-pail material. 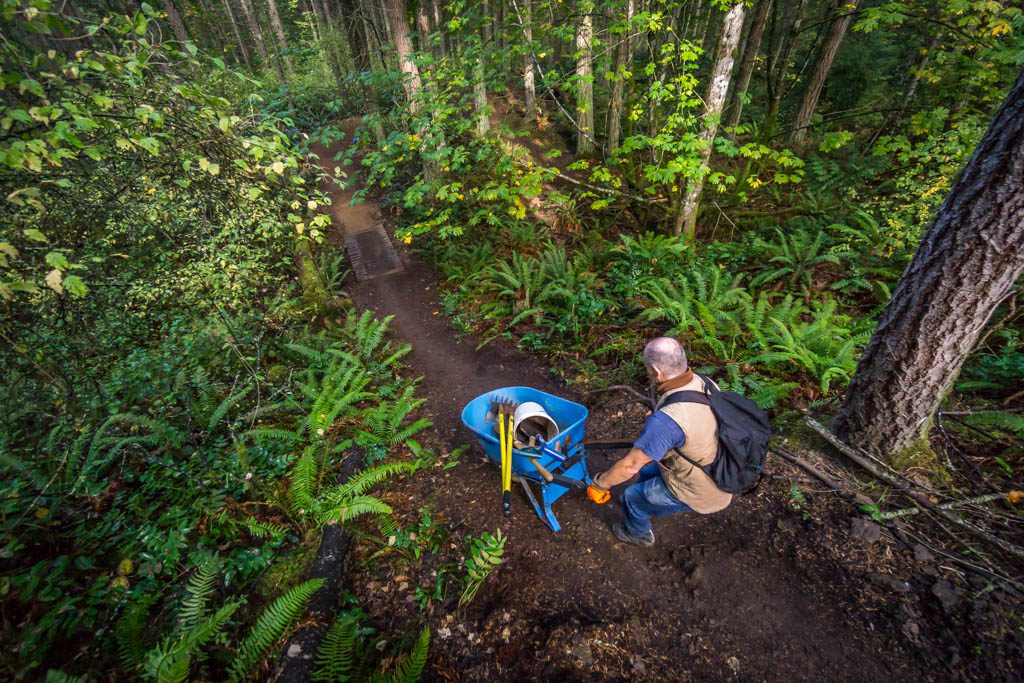 The extra trail love seems to have helped, as Xylem is enjoyable enough it’s easy to forget it’s a climbing trail. Enough so, that it sold the BCBR brass on working toward a North Cowichan stage before the race organizers’ scouting ride had even tapped into Maple Syrup. CTSS’s next trail project, tentatively called Phloem, is looking to keep the momentum going. With trail data showing enough riders were opting out of the demanding ride down Maple Syrup in favour of a more casual return trip down Xylem, the Society decided to build a more accessible flow trail to give riders an option beyond the black diamond-rated Maple Syrup trail. As phloem carries sustaining nutrients to a trees roots, the new flow trail will nurture and develop riders skills, and the mountain’s fun factor. If neighbouring Mount Tzouhalem’s ultra-fun Double D and Bisecticon trails are anything to go by, when Phloem is built, it will be worth a trip all on its own.

Earlier this February, CTSS marked the fifth year since the Society’s formation. With two trails built, and a network assessment submitted for the neighbouring Mount Tzouhalem network, which will also be featured in the BCBR, the group has covered an impressive amount of trail in its short existence. Part of the high pace comes from dealing with a single landowner. Where other trail associations have to communicate with everything from municipalities to private landowners and timber companies, CTSS only has to deal with North Cowichan.

Dealing solely with the municipality can have its own drawbacks, a signage project on Mount Tzouhalem has been on hold for a lengthy period of time, and approval for Phloem remains on hold, however CTSS has a very good working relationship with Cowichan and it’s not a relationship the Society is taking for granted. For its part, the Municipality isn’t taking CTSS’s work for granted, either, and has reciprocated the Society’s efforts with several community projects. The Maple Mountain parking lot was expanded, and construction is currently underway to do the same at a lot on Tzouhalem that’s frequently overloaded. There’s even been occasions when the forest manager has shifted a planned cut block in order to preserve an existing trail.

The second source of CTSS’s rapid progress, and part of the reason for its strong relationship with the Municipality, is the huge amount of support mountain biking enjoys in the local community. Trail days turn out big crowds of willing workers, and fundraisers helped expedite the building of Xylem. There’s enough support from the community that the Phloem is already fully funded and planned, with CTSS just waiting for the green light from the Municipality to dig in. 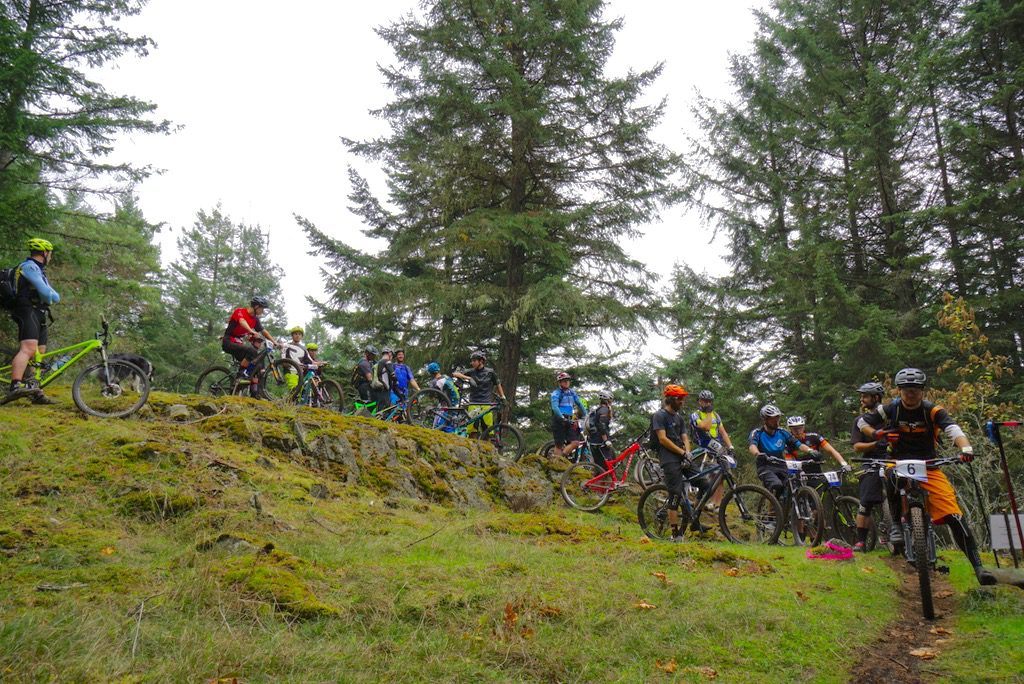 For now, all efforts are going toward making sure BCBR’s North Cowichan debut is a success. After that pressing deadline, the focus is on making sure that after such rapid growth, the entirely volunteer-run CTSS settles into a sustainable role in the local riding community, and in the larger district of North Cowichan. The Society continues to develop its role as intermediary between riding community and town council, but mountain biking has existed for a long time in the area. As xylem and phloem form parts of a system that helps a tree grow and produce sweet maple syrup, CTSS recognizes it’s just one part of what makes riding in North Cowichan so good. Instead of looking to take over completely the goal is to find a role that it has the capacity to perform, and that benefits the community as a whole. 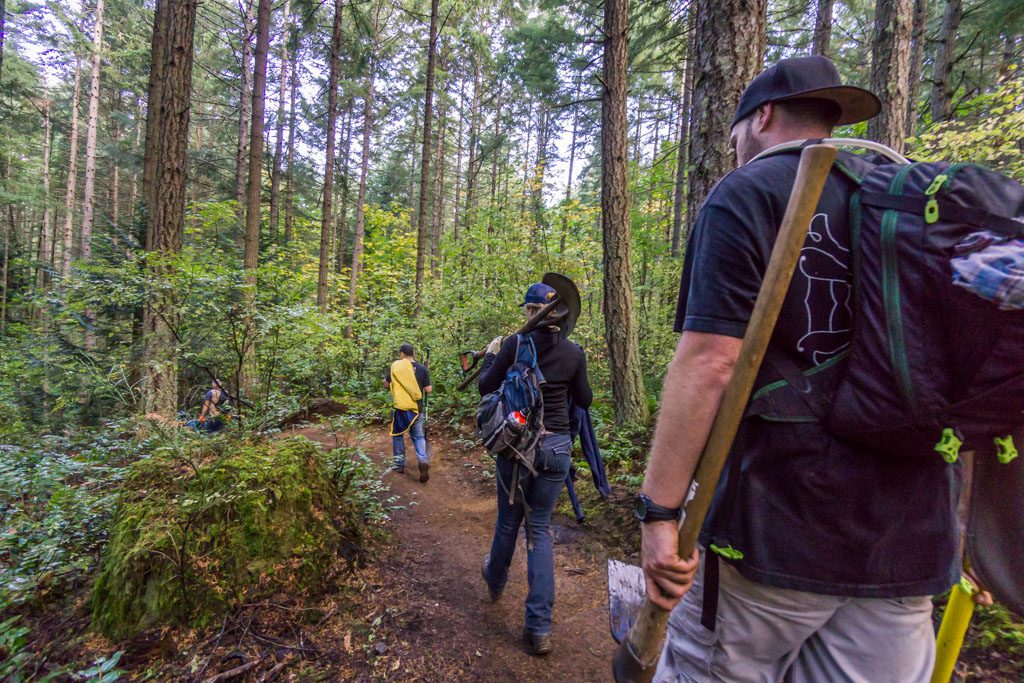 Thank you to Cowichan Trail Stewardship Society board of director members, Matt Grossnickle (President), Tom Roozendaal (Director at Large) and Steve Williams (Treasurer) for their time and help sorting out names, details and timeline for this piece, and to CTSS board member Chris Istace for supplying photography.