“It was an amazing day for me, and also for the French squad,” Ferrand Prevot said at the finish line.

With thick mud caking a course that was relentlessly steep, up and down, strategy and skill were key to success in Leogang. Ferrand Prevot, keen to avoid getting caught up in crashes, attacked from the gun.

“I wanted a good start, I managed to be first for the downhill,” the defending world champ shared of her strategy. “After that, I saw that I had a little gap, and it was growing bigger and bigger so I just tried to keep my own race.”

It proved to be a sage strategy, as multiple pre-race favorites crashed or were forced to withdraw from the race. Jenny Rissveds, Kate Courtney and Anne Terpstra were among the elites to not finish the race.

Ferrand Prevot, though was clear of the chaos. Much like she did six days ago at World Cup #2, the highly decorated French woman rode off the front alone and never looked back. By the end of the short start loop, Ferrand Prevot had an 11-second advantage. It was the smallest her lead would be the entire race. By the finish line, her winning margin had grown to a staggering 3:01.
RELATED: How to watch 2020 UCI mountain bike world championships in Canada 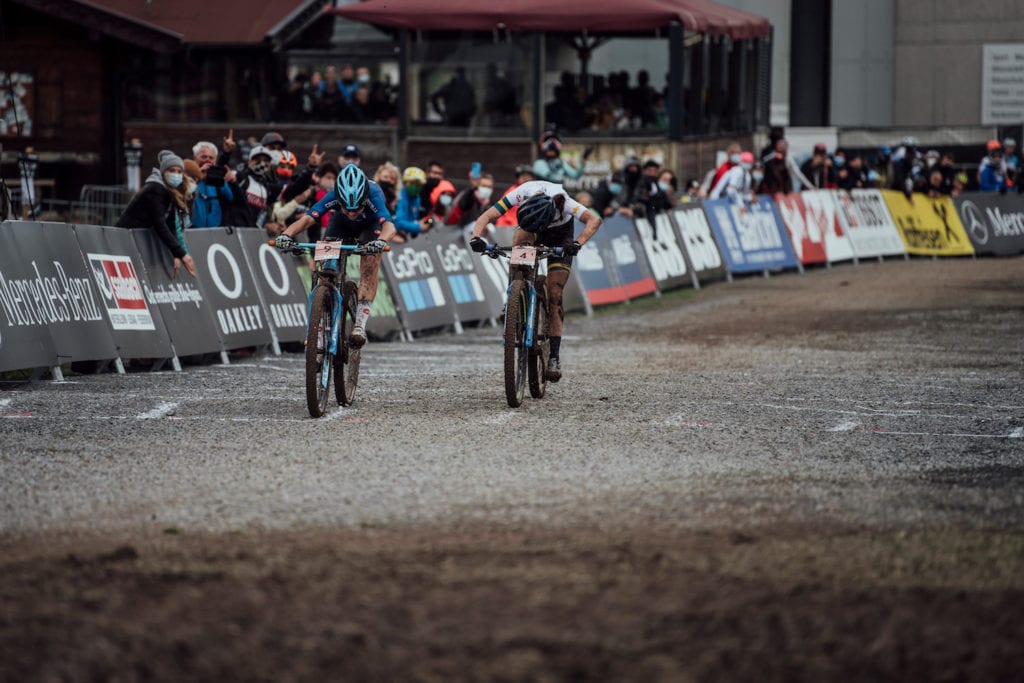 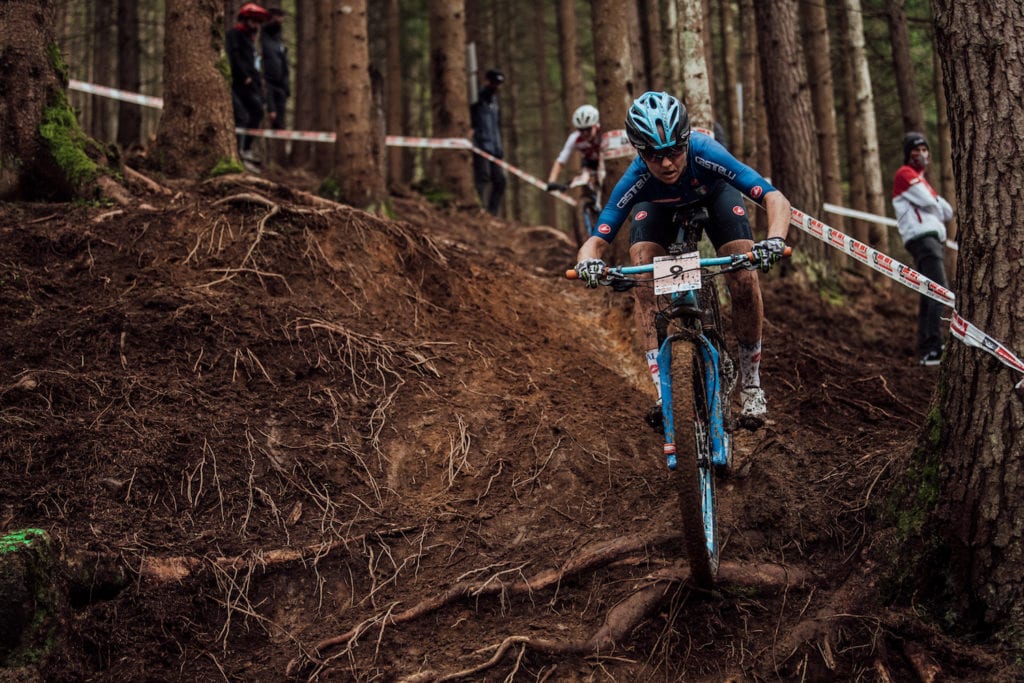 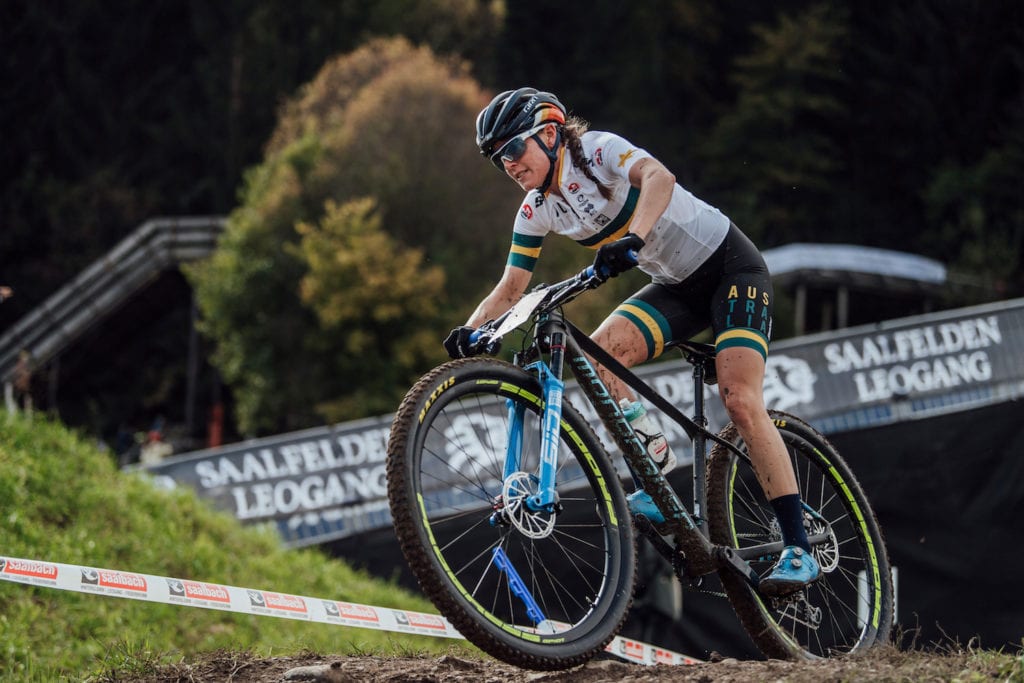 Rebecca Mcconnell rode in second for much of the day, but settles for third. Photo: Bartek Wolinski/Red Bull Content Pool 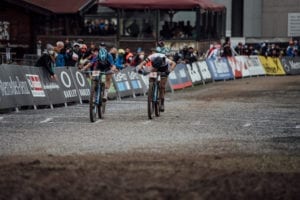 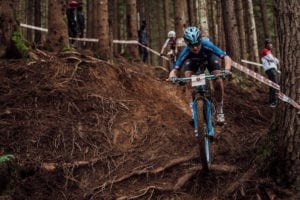 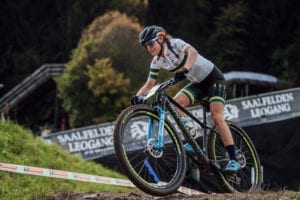 Behind, a battle was brewing. Australia’s Rebecca McConnell was caught by Italy’s Eva Lechner on the final lap. Neither was able to gain separation and, after 90 minutes of slogging through thick mud, it came down to a sprint. Lechner edged out the Australian to take silver, while McConnell settled for bronze.

Four Canadian women were entered in the elite women’s race. And, after very different race profiles, the four ended up packed close together at the finish. Emily Batty led, in 27th place. She was followed immediately by Jenn Jackson in 28th and Haley Smith in 29th. Maghalie Rochette finished a few more places back adding a 33rd in elite XCO to her fifth place in Wednesday’s eMTB cross country.

Absolute monster track for World Champs! Leogang delivered an epic (831m vert in 16.5km 😳), I got my top 30, skirted in the low 20s for most of the race, and there was just enough mud to get me stoked for cyclocross 🤪 The past month has been a big change in pace for me, I’m going to miss the team and the scene, but am really looking forward to settling back into the regular routines of life, and working on the next 🙃🇨🇦 Thank you team, thank you Canada, and thank you everyone for sharing and supporting the ride. • 📸 @andyvathis • #NorcoBicycles #SRAMmtb #Rockshox #KendaMTB #DTSwiss #HTcomponents #Jakroo #SmithOptics #HandUpGloves #adventurebeginshere #limitsbedamned #norcorevolver #findmeoffroad #athomeinthedirt #ucimtbwc #leogang2020 #cyclingcanada

On the men’s side, it was Léandre Bouchard again leading the charge. After a very strong showing in last week’s Short Track XC World Cup, the Pivot Cycles-OTE rider landed in Austria with momentum. Bouchard rode to 26th in the elite men’s cross country race.

Not far behind, Andrew L’Esperance landed his best-ever European result in 38th. Peter Disera was 12 seconds back in 40th. Marc Andre Fortier placed 51st and his teammate Raphael Auclair in 57th. All solid results in chaotic conditions and a 90-rider start list.

Good day on the bike! Happy to finish this crazy season off with my best European result ever. P38. Solid performance, climbing well, loose in the tech and having a good time on the bike. Huge thanks to the @norcofactoryteam crew for making this all happen, it took a lot of work on behalf of the staff. Thanks to @cyclingcanadaofficial for the logistical support setting things up during this strange year. Cheers! // PC @andyvathis @norcobicycles #NorcoBicycles

Marianne Théberge was the lone Canadian entry in the under-23 women’s race. After working her way inside the top-20, Théberge ended her season with a 28th place finish.

Sarrou completes the trifecta for France

Other pre-race favorites, including Henrique Avancini and Nino Schurter, struggled with the challenging conditions, the cold or just faded off the front.

At the end of the race, it was Sarrou alone in the lead. The French rider takes his first elite world championships win, and his country’s third that day. It is Sarrou’s second rainbow jersey this week, after riding the anchor leg of France’s winning XC Team Relay squad on Wednesday.

Titouan Carod joins Sarrou on the podium in third, one better than his fourth place at Mont-Sainte-Anne in 2019. Only Mathias Flueckiger could disrupt the French sweep, taking silver 45 second back of Sarrou.

Defending world champion Nino Schurter fought back to finish 9th. One spot behind, his rival Henrique Avancini placed 10th. A week after winning his first elite World Cup XCO, Simon Andreassen slid back through the ranks to 32nd.

One week ago, Loana Lecomte announced her arrival in the elite ranks with a World Cup win and several podiums. She was on the box in Short Track XC, then stepped up to full XCO win days later. Her consistent performance all week was one of the revelations of an abbreviated World Cup season marked by strong performances by young riders.

While the French rider is fast enough to ride with the elites, she is easily young enough to race under-23. In Leogang, she was back in her age group, and back at the front of the race.

Much like Ferrand Prevot would do hours later, Lecomte took to the front early and never looked back. After the start loop, she led by 20 seconds. At the finish, her winning margin was 1:11.

While Lecomte had shown herself to be the class of the elite field, she was not without challengers. America’s Haley Batten was riding strong in second. Not far behind her, Ceylin del Carmen Alvarado was moving up. After winning her first XCO U23 World Cup in Nove Mesto, the Dutch phenom had confidence, and very cyclocross-friendly conditions to challenge Lecompte’s lead.

In the end, it was Hungarian Kata Blanka Vas taking second and del Carmen Alvarado third. The U.S.A.’s Haley Batten held on after her early effort, taking fourth in Leogang.

2020 UCI world championships conclude with the junior and elite downhill races on Sunday. You can watch the elite races live from home in Canada on FloBikes.