Giant has substantially reworked its popular Trance Advanced Pro 29 trail bike for 2022. It’s still a short travel trail bike, but with slightly more suspension and a lot more attitude than the outgoing version.

After several months riding the 2022 Trance, it’s clear that this bike carves out a wide space for itself and thrives within that range. There are some limits, but this is an excellent effort from Giant that should have broad appeal.

While Giant keeps the same trail bike purpose for the Trance, there are sweeping changes that make this a very different bike. There is slightly more travel, significantly updated geometry, a new flip-chip and an all-new frame storage compartment.

Starting with the frame, Giant extends the Trance’s rear travel to 120 mm from 115 mm. This gives the bike slightly more room when things go sideways, but it’s the geo changes – and the flip-chip – that have the biggest impact on how the Trance feels on trails. 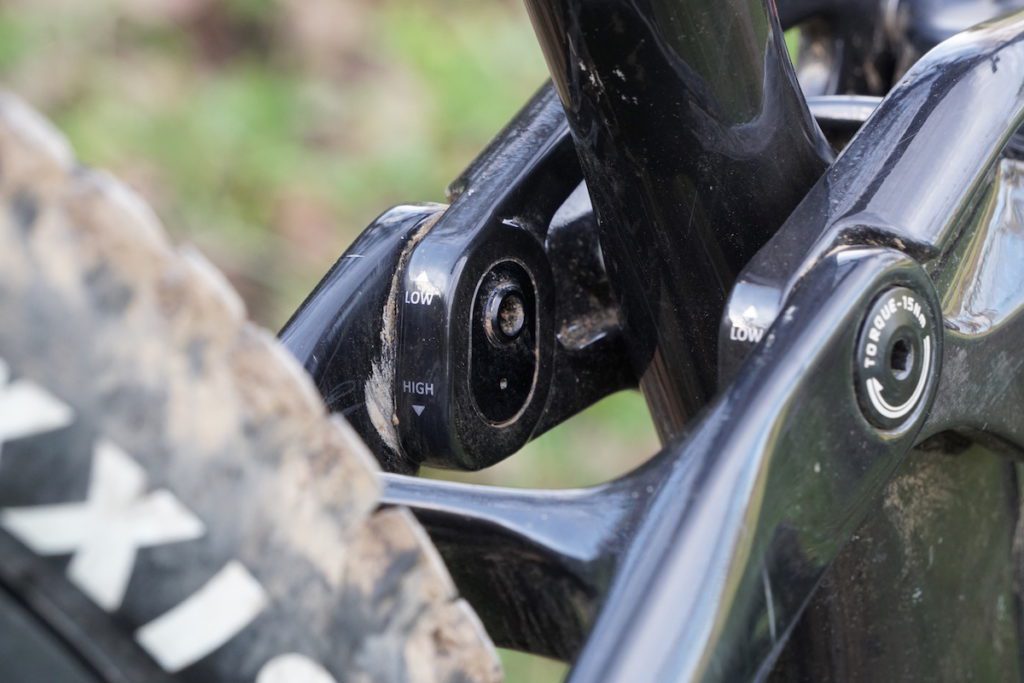 The Trance's flip-chip in "low" 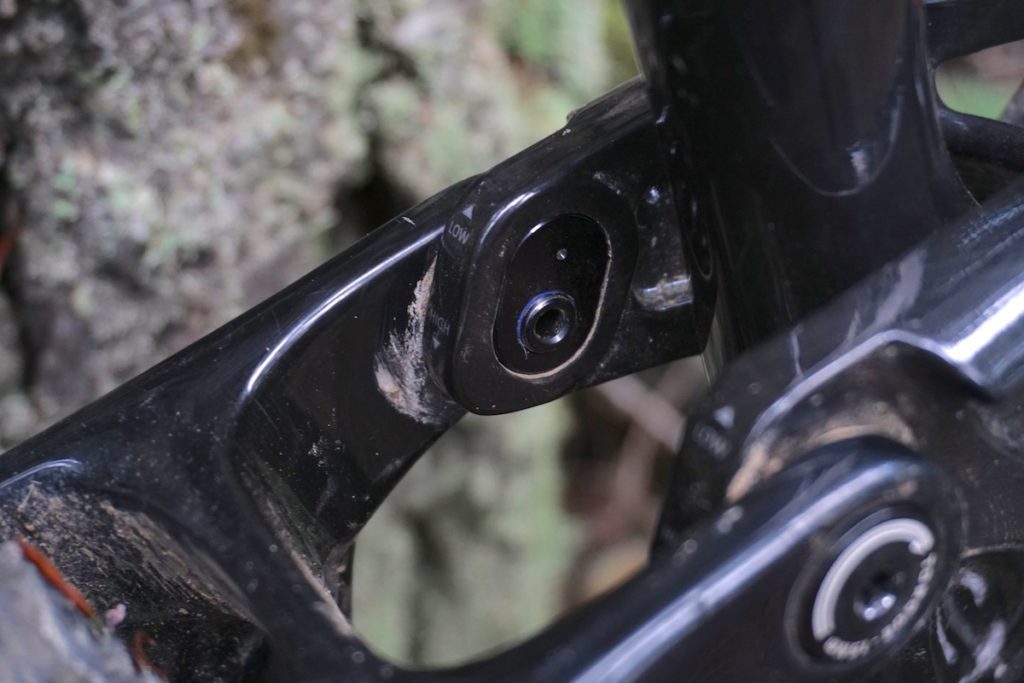 And in "high." The frame's lines are designed around "low," but the bike feels at home in "high," too. 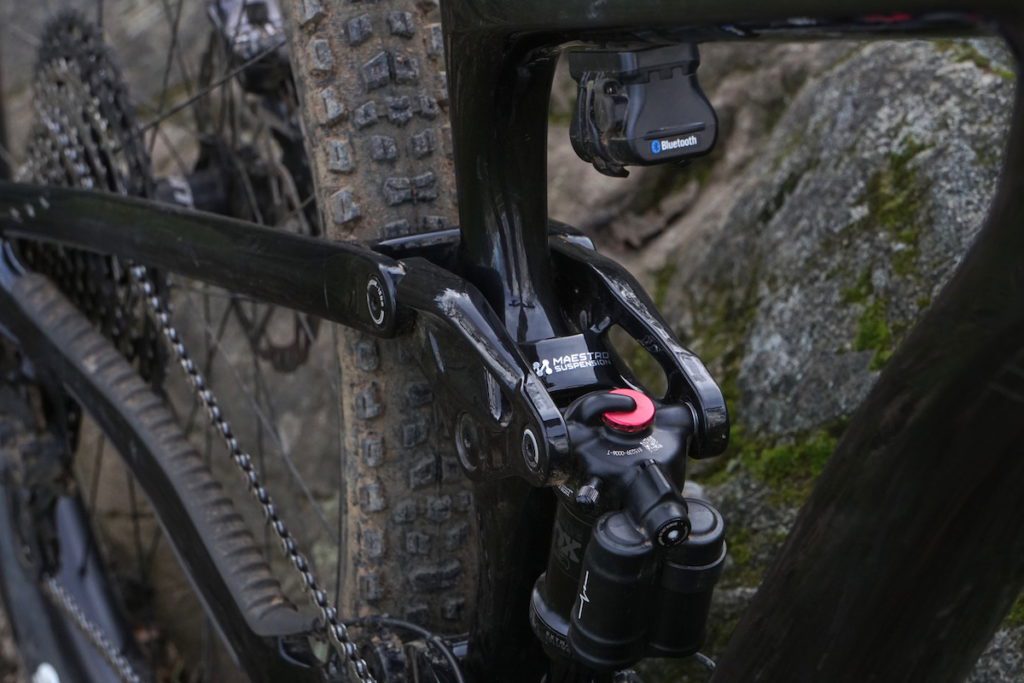 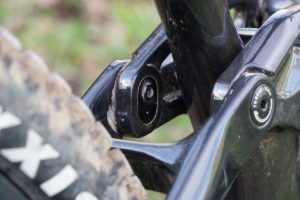 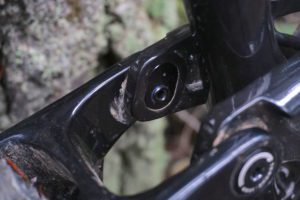 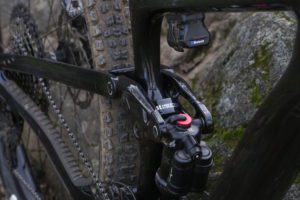 The Trance is still trail-focused, with an eye to some lingering cross country influence, but with a much more playful and stable geometry. It’s a slack 65.6-degrees at the head tube angle, with a 77.0-degree seat tube keeping you positioned in the center of the bike for efficient climbing. All that is in the “low” setting on the Trance’s flip chip. Put it in “high,” and the Trance is more balanced between tight, twisting corners and wide-open fun. The HTA steepens to 66.2-degrees, while the seat tube relaxes to 76.3 and the BB climbs a full 10-mm higher. 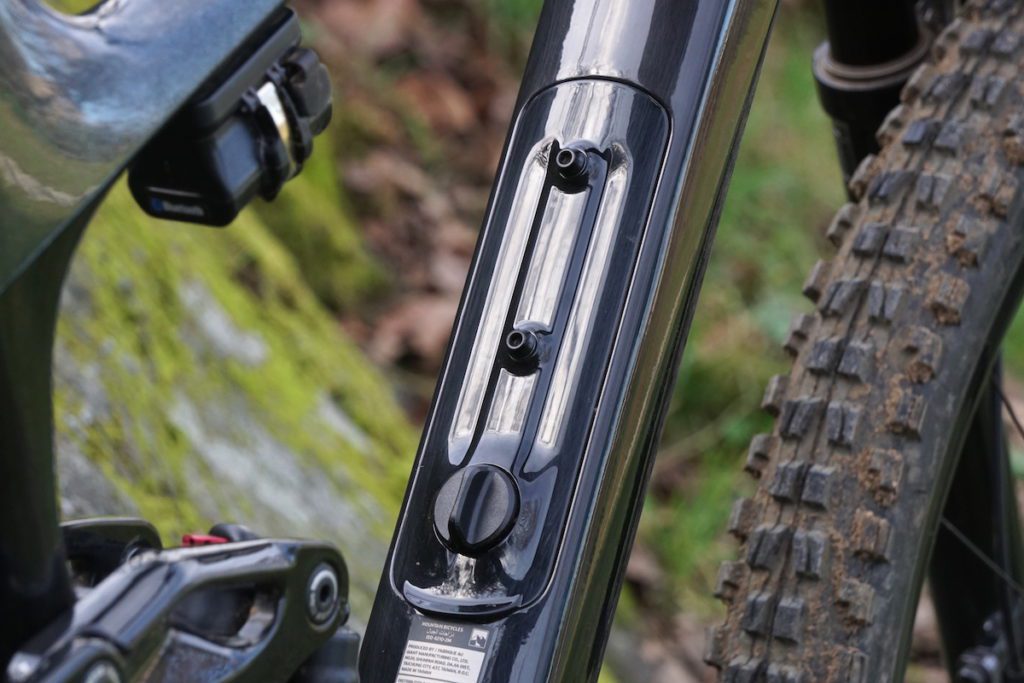 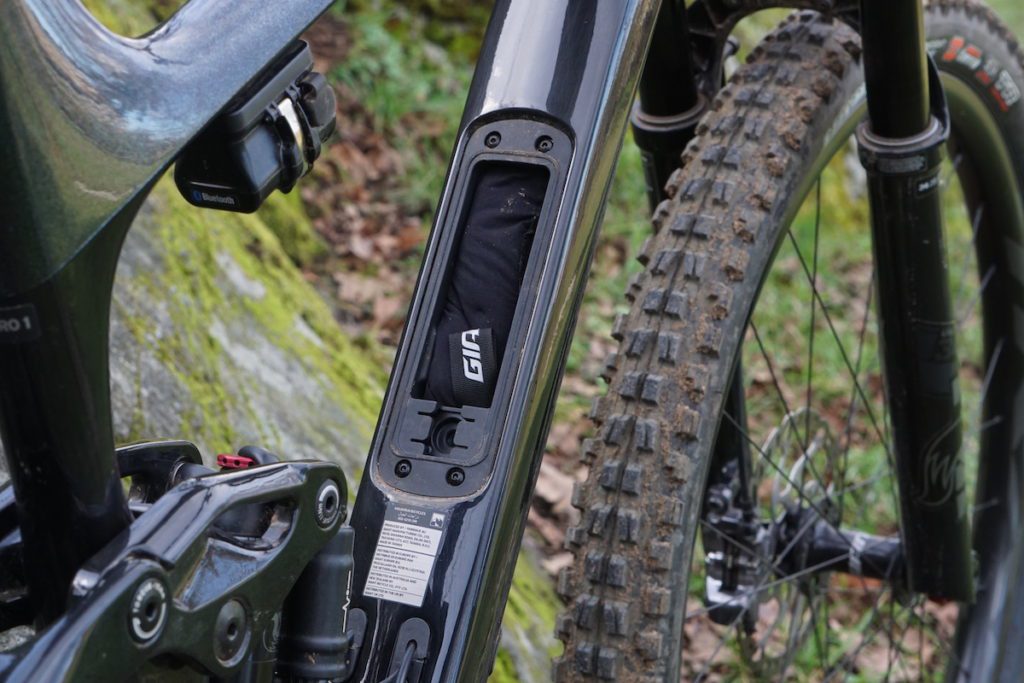 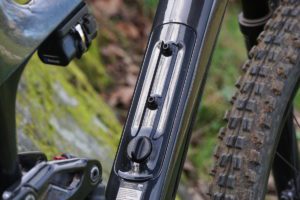 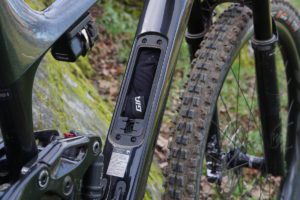 Finally, Giant adds an internal storage compartment to the downtube of the Trance Advanced Pro’s front triangle. This compartment, only available on the carbon fibre models, is just big enough to squeeze a tube and maybe  CO2 inside with Giant’s water-resistant bag. That bag is important as, unlike some other designs, Giant leaves the compartment open-ended. This makes it easier to secure the internal cable routing, or stow a light jacket in there, but you wouldn’t want to drop in any loose bolts.

Giant Trance 29 – Not a “downcountry” bike

Giant is clear that, while the Trance “only” has 120-mm of travel, it is not intended to be an over-forked XC bike. It intended to be an all-rounder, with just enough travel to have all the fun you want. What’s the difference? An XC-trail bike is designed to excel on the climbs and be less of a struggle on the descents. A trail bike, like the Trance, aims to be a balance of efficient-enough climbing and excellent descending.

That distinction on paper holds true when you hit the trails. The Trance out-classes any XC trail bike when it comes to having fun in corners or getting airborne. It is a big heavier, coming in at just under 30 lbs., but that matches the Trance’s purpose and gives it a lighter feel on the trail than the longer-travel trail bikes is modeled after. Any “extra” weight versus an XC bike is a fair trade off for making the mellower trails much more engaging than a larger bike would be. 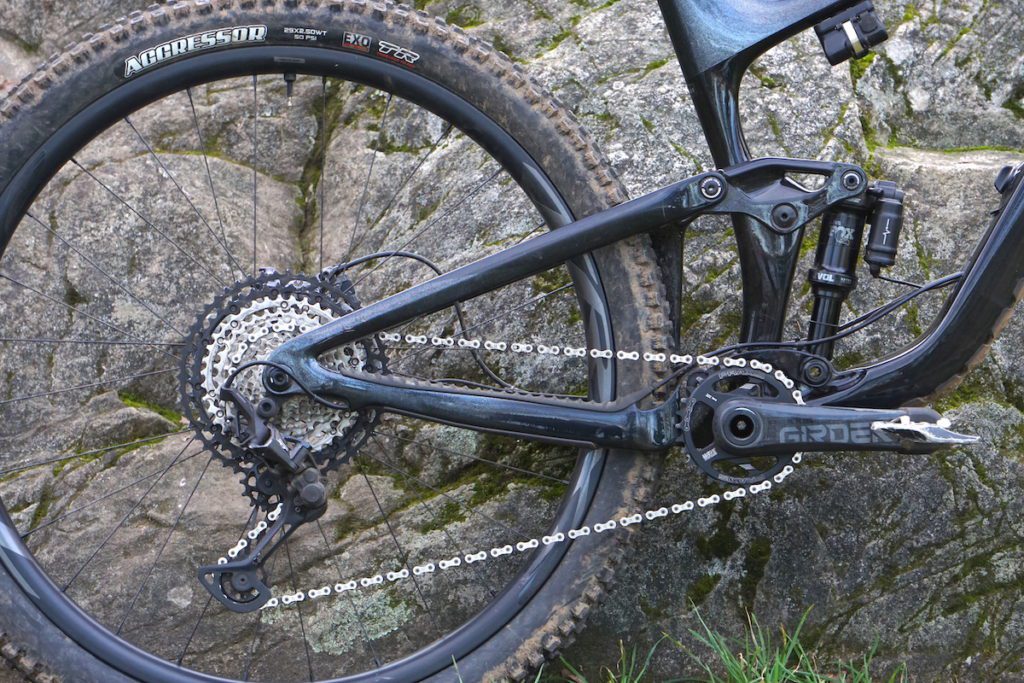 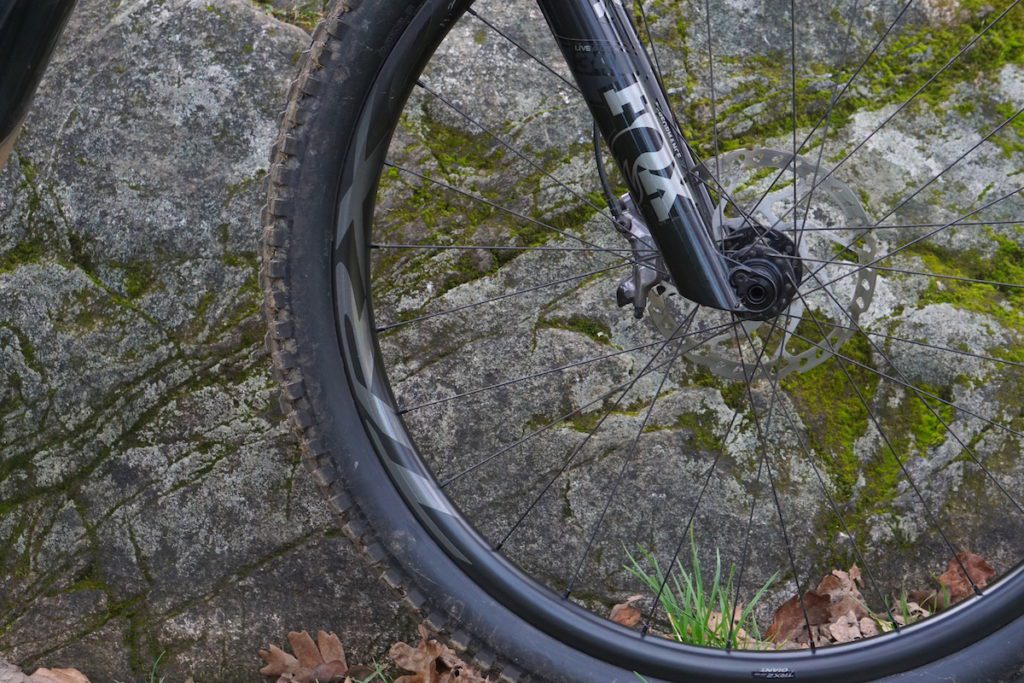 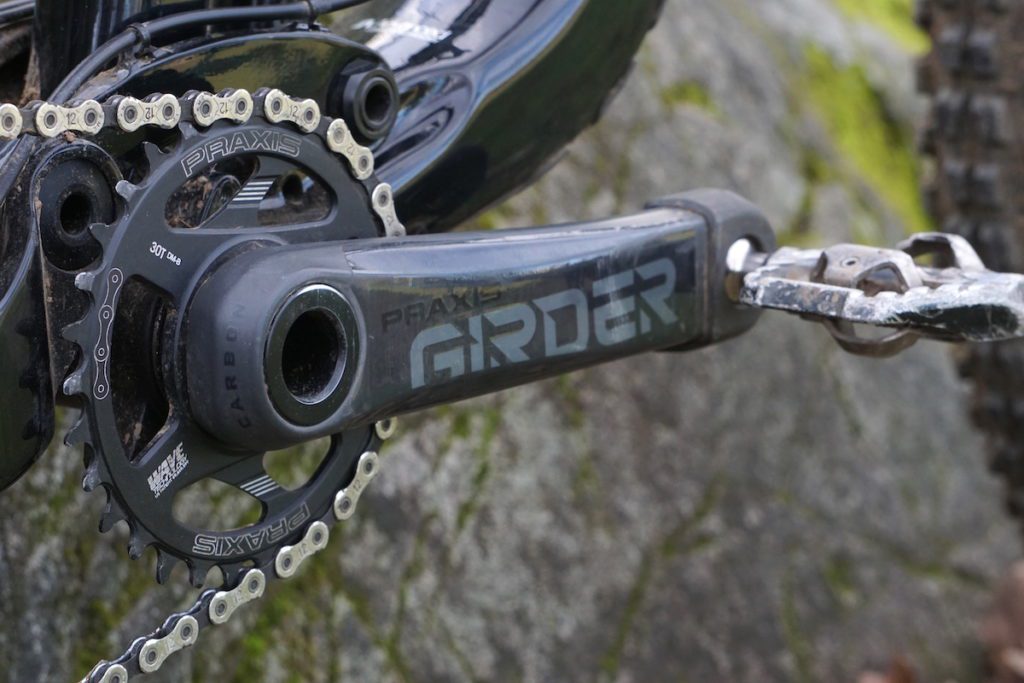 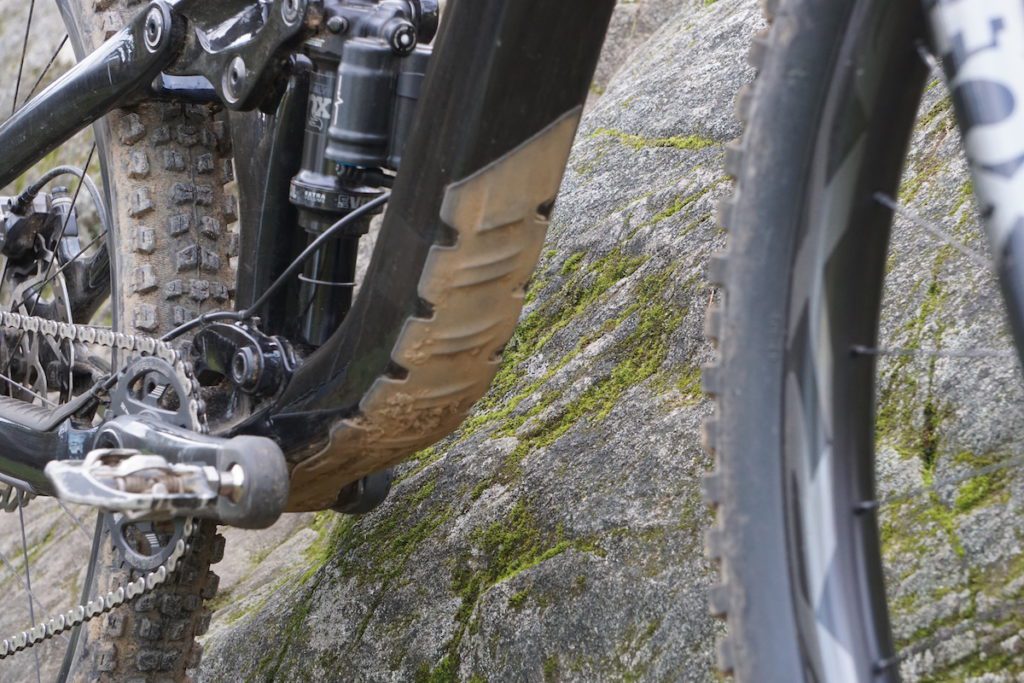 A little frame protection for the Trance's downtube. 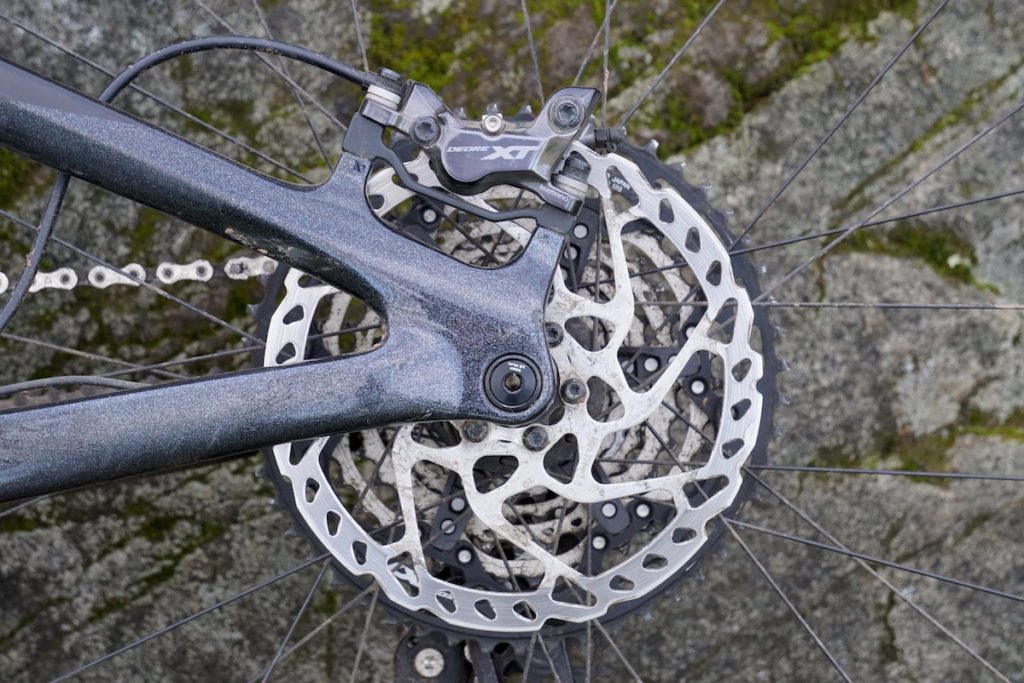 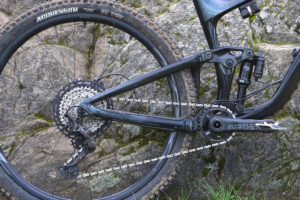 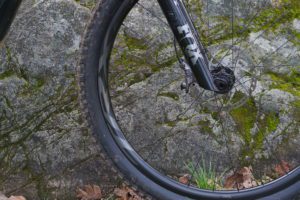 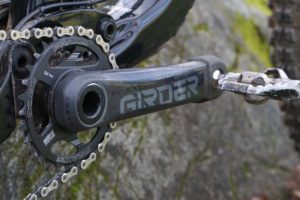 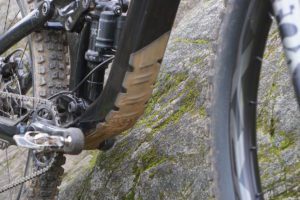 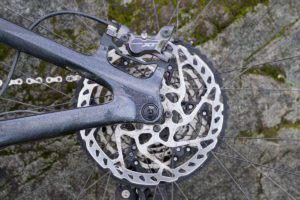 Giant offers the 2022 Trance in a range of aluminum and carbon fibre frames. The Advanced Pro 29 1 we tested is in the middle of the three carbon fibre builds, checking in at $8,300.00. While Fox’s updated Live Valve electronic suspension system attracts the most attention, it is a solid build all around. A Fox 34 Performance Elite 130-mm fork and Performance Elite shock (120-mm) are both light, but solid, making them a good match for Giant’s intentions with the Trance.

Shimano provides excellent Deore XT trail four-piston brakes and most of the 12-speed Deore XT drivetrain. Giant opts for a Praxis Girder Carbon crankset and Praxis chainring. The chainring is the one weak point in the build, leading to several dropped chains. Replacing the chainring with one of the many excellent options available is an easy fix, but it is frustrating that a bike in this price range comes with something that doesn’t work.

Giant uses its own TRX 2 carbon fibre 29″ wheels, wrapped in a combo of 2.5″ Maxxis Minion DHF and Aggressor tires, both tubeless-ready. TranX supplies an adjustable travel dropper post. Travel varies by size, with this XL test bike coming with a range from 170-200mm drop. Giant’s own Contact SLR carbon fibre bars (780mm) and other house-brand small parts round out the build.

2022 Giant Trance on the trails

“Trail bike” is a wide category. Giant’s latest effort does really well, within its limits. Those limits are quite generous, it is happy taking on expert/black diamond-rated trails. Where the Trance really shines is in making any blue/intermediate trail more fun, especially there is any kind of flow or fun cornering to be had. With a light, quick frame it is happier making the most of your time on those trails than it is trying to push your, or the bike’s limits (If that’s your game, the 135-mm Trance X 29 might be more appealing). Likewise, if you miss your landing you will be able to find the limits of the 120mm of rear travel or the Fox 34.

Flip-chips and taming the Trance

While the Trance isn’t the toughest little trail bike out there, the range within which it does excel is quite broad. The light frame isn’t too harsh to make flow-ing trails fun. Coming in just under 30 pounds, it is easier pedaling than most bigger trail bikes. Switching the Trance to the “high” setting gives the bike sharper and quicker steering. That makes it more engaging on rolling, cross country riding. It becomes a little more business-like and encourages you to stand and attack short hills. It’s still not XC-efficient, but it’s a better balance between climbing and descending prowess and has better clearance through rocks and tall roots.

Put the Trance’s flip-chip in “low,” which feels like the setting Giant has designed the Trance around, and it has all the attitude of a bigger bike in a lighter package. It’s not going to be as efficient on the pedals as in “high” but it playfully dives into and pops out of even the slightest corner. Again, the 120-mm Trance won’t save you if you get too out of control. Instead, Giant opts for a quick bike that lets you pick lines with ease and play around on the trail. The smooth Maestro suspension adds grip and 2.5″ tires to help take any unexpected roots or rocks in stride. 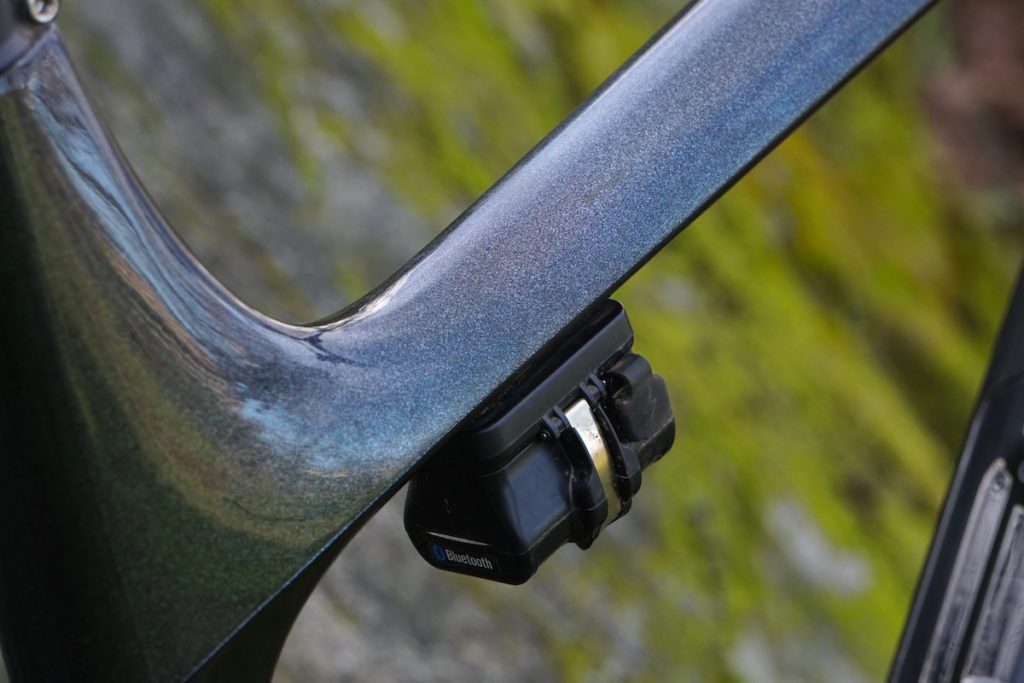 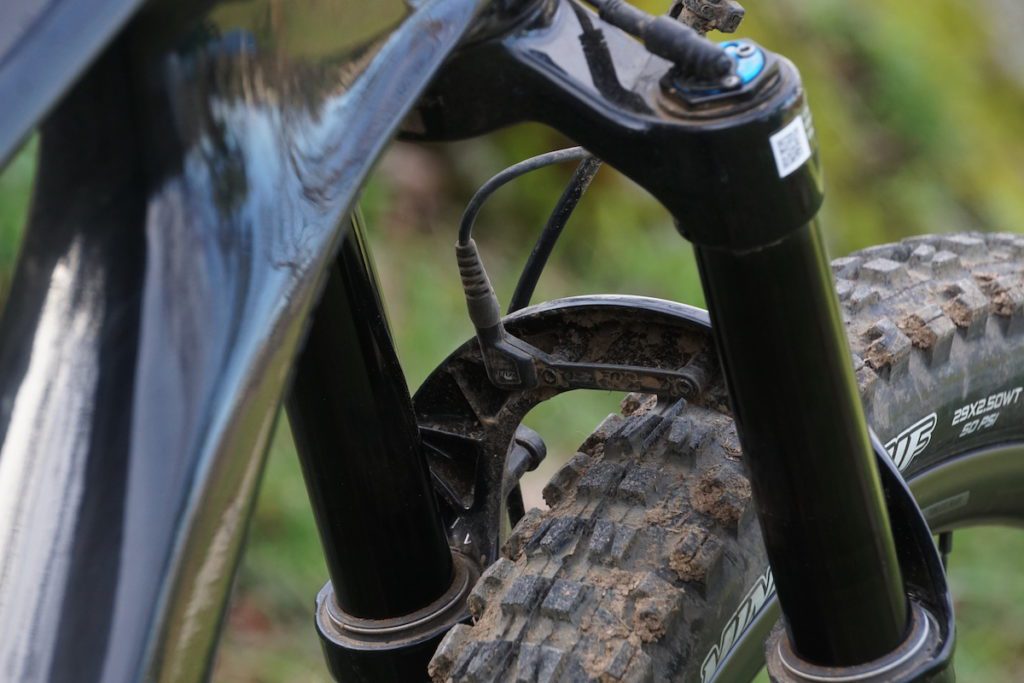 And wires tucked away all over 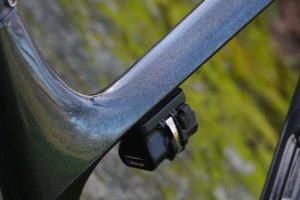 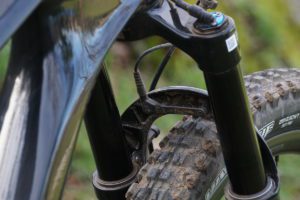 Fox updated its Live Valve system for 2022. The new version aims to be more sensitive and more predictable. Basically, it aims to be closer to the “open when you need it to be open” ideal. There are still five different “bump threshold” settings. These determine how easily the system switches from locked-out to open. Changing the settings lets you tune the system to your own riding style. Should the battery die while you’re riding, the system defaults to “open.”

In the most sensitive setting, you rarely notice the Trance being locked out when you don’t want it to be. It is more supportive on smooth climbs but is quick to open. At the opposite end, the most cross-country focused, Fox’s suspension is noticeably firmer while climbing. In this setting, it’s not as fast to open up when you hit the occasional root or rock. It will open, but not as instantaneously.

While largely positive, I did find the system a little unpredictable for the type of slow-speed technical riding that is predominant in Victoria, B.C.’s trails. Using the most sensitive setting did help, but still isn’t perfect. On anything but the slowest, most awkward trails, Live Valve is more predictable and advantageous. Giant’s Maestro design has always been a little active. Having the suspension firm up helps the Trance find efficiency. It puts the Trance closer to some of the XC-Trail category bikes that it will, inevitably if not fairly, be compared to.

Does the Trance need Live Valve to thrive? I don’t think so. Running the bike with the electronics powered off was just fine, if a bit more active. If you’re keen on the Trance but not into Live Valve, don’t let that stop you from looking at one of the other models. It is impressive that Giant is able to bring a Performance Elite-level Live Valve option to a bike that is $8,300. While not cheap, that’s a better price than any other brand’s offering the technology as a stock build option that I’ve seen.

There is a wide range of riding between cross country bikes and long-travel trail bikes. The 2022 Trance Advanced Pro does a great job of carving out a space for itself. It’s quick and fun on less-extreme terrain while still having the playful attitude of a bigger bike. The Trance is a great reminder that you really don’t need a ton of travel to have a really good time on a bike

There are a few small downsides to the Advanced Pro 29 1 build. The storage compartment is maybe on the small side. You’ll have to master your folding technique if you want to fit more than a tube in there. Praxis chainring had trouble holing the chain on throughout the test, but the Girder Carbon crankset is compatible with other chainrings. The biggest consideration isn’t necessarily a downside. With 120-mm travel, the Trance won’t feel as comfortable pushing into really aggressive terrain like a bigger bike would or save you from harsh cases. But that’s not what Giant is trying to do with this bike.

A trail bike that is fun anywhere

Instead, it has a quick, responsive ride that makes any trail fun. While more aggressive than previous versions of the Trance, it is still a more balanced approach to the trail bike category. Giant recognizes most people don’t live in Whistler or want a bike only designed to ride there. Without being a “down-country” bike, it keeps some pedalling efficiency and sharp steering for rolling terrain with the help of the flip-chip. At the other end, it is a really playful, engaging ride that has the personality of a bigger bike, without the heft or harshness of extra suspension or an overly stiff frame.

If you want a trail bike that is balanced between playing around on trails and more direct movement. Especially if you don’t mind playing with a flip-chip to get the best of both worlds, the Trance Advanced Pro 29 could be your bike. Or, set it in the mode that suits where you ride best, and just enjoy the ride.