In the 1990s, professional road riders looking for an edge used SRM’s early crank-based power meters to get quantifiable data that could help them beat their rivals. The technology was expensive. Throughout the 2000s and 2010s, more power meters became available by companies such as PowerTap, Quarq, Stages and Garmin. As new devices came along, prices went down.

SRM continued to develop its power meters. In fall 2019, the company introduced the first pedal-based power meter for mountain bikes, the X-Power. There’s a dual-sided model for measuring both left and right power, as well as a single-sided unit, which extrapolates your overall wattage. Shortly after the release of the X-Power, the pandemic hit, manufacturing was made more difficult and the pedals, while available, were in very short supply. The X-Power is SRM’s second attempt at pedal-based power. The first was a road pedal collaboration with Look. The SRM Exakt was considered by those who used it as finicky, requiring special tools for installation. For the X-Power, SRM designed everything in-house. It’s created a straightforward and highly effective power meter that comes either single- or double-sided.

Installation and calibration of the SRM X-Power

Installation of the dual-sided SRM X-Power pedals is simple. All I needed was a pedal wrench (Allen keys won’t work) and to download the associated app. In the app, I entered my crankarm length and performed a zero-offset calibration. Then I was ready to go. Fortunately, I use Shimano SPD so I didn’t have to attach the set supplied by SRM to my shoes.

These pedals are 344 g, about 34 g heavier than my Shimano XTR M9100s. The X-Power pedals come with rechargeable batteries, which is a plus. With my Garmin Vector road pedals, I’m often opening them up and popping in small coin-cell batteries. The X-Power also comes with two massively long USB micro cables and two charging ports, which is useful if your bike is stationed far away from a wall socket or computer. (SRM says it charges better and faster through a wall socket.) The charging port connection to the pedal can be finicky, as the connection on both pedal and port must be clean (not often the case after my MTB rides) and you need to make sure that red light on the status LED is on to know that it is charging. SRM is claiming 35 hours per charge, with a daily battery drain of 2.5 per cent. The reality for me was that I was charging the battery every two or three rides, so roughly every 10 hours of ride time.

Once the battery is charged, it’s time to calibrate. With other power meters, I usually calibrate the power meter via my head unit before every ride. SRM told me that while Garmin may provide that option, the head unit is actually not functionally doing anything. The only way to calibrate the unit is through the app. According to SRM, you only need to calibrate after you install the pedals or if you loosen and retighten them. Otherwise they maintain their calibration. Of course, every time you swap them between bikes, they will require calibration. Keep an eye on crankarm lengths, especially when you go from your mountain bike to your cyclocross bike. SRM does say it is very important to close the app before riding: if the signal is going to the app and your head unit, you may get incorrect data.

To see and record power data, I used Garmin head units. I was able to connect through both ANT+ and Bluetooth Smart. With the ANT+ protocol, the right pedal is the master, transmitting its own data and that of the left unit. Occasionally, I had very short drop outs with the left unit, but these were a second or less. While the Garmin did register them occasionally, they did not really seem to affect the data. The option connecting through Bluetooth, requires each pedal to connect to the unit separately. In this case, I never saw any dropouts. 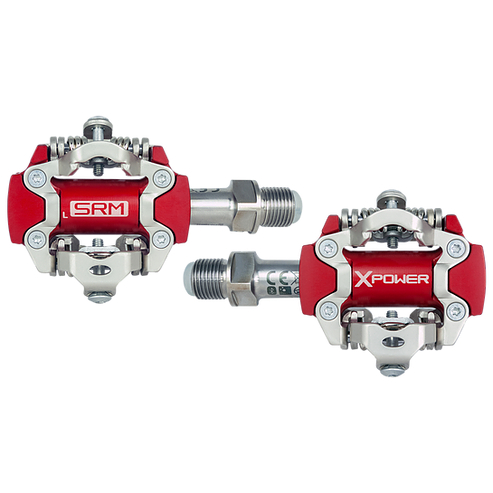 I rode SRM X-Power pedals mostly on single track, but also on gravel and some ’cross. The power was very accurate, and accuracy was maintained despite not frequently calibrating. I was able to ride two power meters on my ’cross bike, the other being a crank-based Quarq. I saw no notable difference between the data, which is what one would hope for as both a crank-based and a pedal-based meter are in an area of the bike that is under comparable amounts of strain (unlike hub-based power meters). SRM says the pedals have an accuracy of +/- two per cent. While riding on trails, I wondered what would happen to power numbers when I hit roots, landed off a big drop or clipped a pedal? SRM’s Power-X pedals do not register power when there is no cadence, which eliminates power spikes from big landings or bouncing through technical sections. When I clipped a pedal hard on a root or rock (which I do on occasion), the pedals did, on occasion, register power anomalies.

Overall, the Power-X pedals are excellent. They are more dependable than other power-pedals I’ve used. With the exception of only occasional, very short drop outs of the left pedal, they seemed to stay connected all the time. The one knock against them is the battery needs frequent recharging. At US$1,199 for dual-sided pedals or US$899 for single-sided, the SRM pedals are pricier than other options. Still, their performance on the trails and dirt tracks makes them a prime tool for tracking your fitness and performance on rough routes.