While XTR may be Shimano’s shiny flagship – the leading edge showing off the Japanese component makers engineering achievements – it is the workhorse Shimano Deore group that the vast majority of riders actually experience on their bike. Now, that experience includes 12 speeds.

With M6100, Shimano’s Deore group goes to 12-speed, joining the latest XTR, XT and LX groups. But that’s not the only news out of Japan. New Deore M5100 11-speed cassettes now get the same gigantic 51-tooth cog as its 12-speed brethren, but using the older HG freehub body design, making it an attractive upgrade option for those that don’t want to upgrade to microspline. Finally, the M4100 Deore group adds updates and upgrade options for 10-speed 1x and 2x drivetrains.

The big headline, of course, is that Deore is gaining 12-speeds. This means Shimano finally has a groupset to compete with SRAM’s GX and NX Eagle groupsets. Like XTR before it, M6100 Deore will get the full 10-51 tooth range cassette. Hyperglide+ shifting and I-Spec EV trickle down to Deore as well. This does mean, though, that riders will have to upgrade to the Microspline freehub design.

Over the years, Deore has earned a reputation for bringing much of the performance of Shimano’s top tier groupsets in an affordable and reliable package. Without a 12-speed option to compete with GX and NX Eagle, though, Shimano was at a disadvantage, especially in the OE spec wars. Now that there’s a more wallet-friendly option, expect to see much more Shimano spec on 2021 bikes when they start rolling out this fall.

RELATED: Could the new Shimano XT be better than XTR?

Shimano’s 12-speed Deore group gets Shadow RD+ rear derailleur clutch mechanism, matched with the ultrasmooth Hyperglide+ shifting seen on the XTR and XT groups. The 10-51t cassette is made of all steel cogs, unlike the aluminum/steel mix of the XT cassette, but no weight was provided.

The new-look Deore also gets Shimano’s updated disc brake lever design. Like the higher-end groups, you will have the choice between 2-piston and 4-piston caliper options, serving both xc and more aggressive trail purposes.

To make sure you have hub options that match Deore’s price range, Shimano has added a non-series MT410 hub. The hub brings micro spline Compatability at a budged for both 142 and Boost 148 rear hub spacing.

The other big announcement in the new-look Deore line is that Shimano’s big 51-tooth cog is making its way to 11-speed drivetrains. This opens up a much wider gear range to 11-speed, and also to anyone running Shimano HG freehub bodies. You no longer need to upgrade to Microspline to get a wide-range cassette option. Sticking with HG freehub does limit you to a 11-51, instead of the full 10-51, but it’s still a big leap in range over previous years.

To accommodate the big 51-tooth cog, Shimano added the M-5100 11-speed rear derailleur, which gets the same Shadow RD+ tech as the 12-speed version, minus one gear.

Those content with a narrower range, or using a front derailleur, can opt for the 1x or 2x compatible 11-42t cassette. In a neat turn of efficiency, the same M5120 11-speed derailleur will also work with the new Deore 10-speed cassettes. 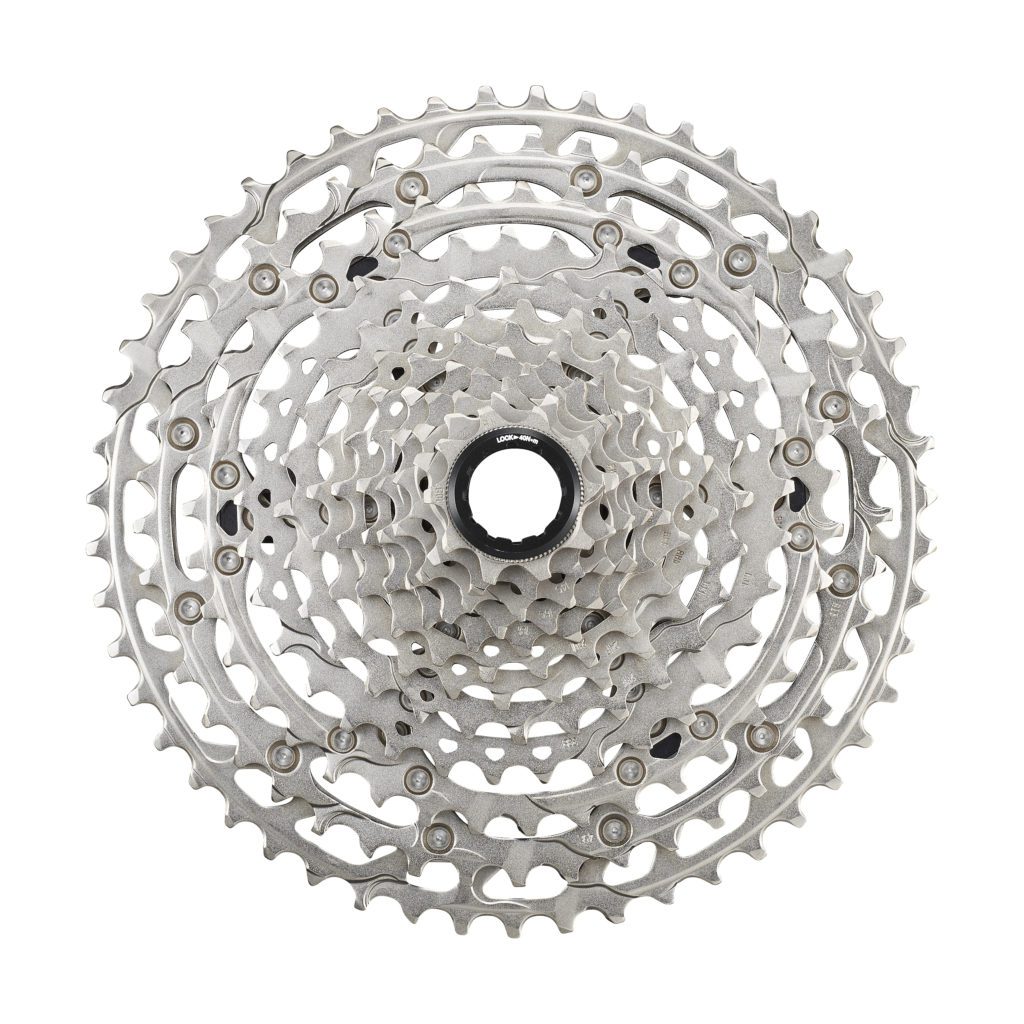 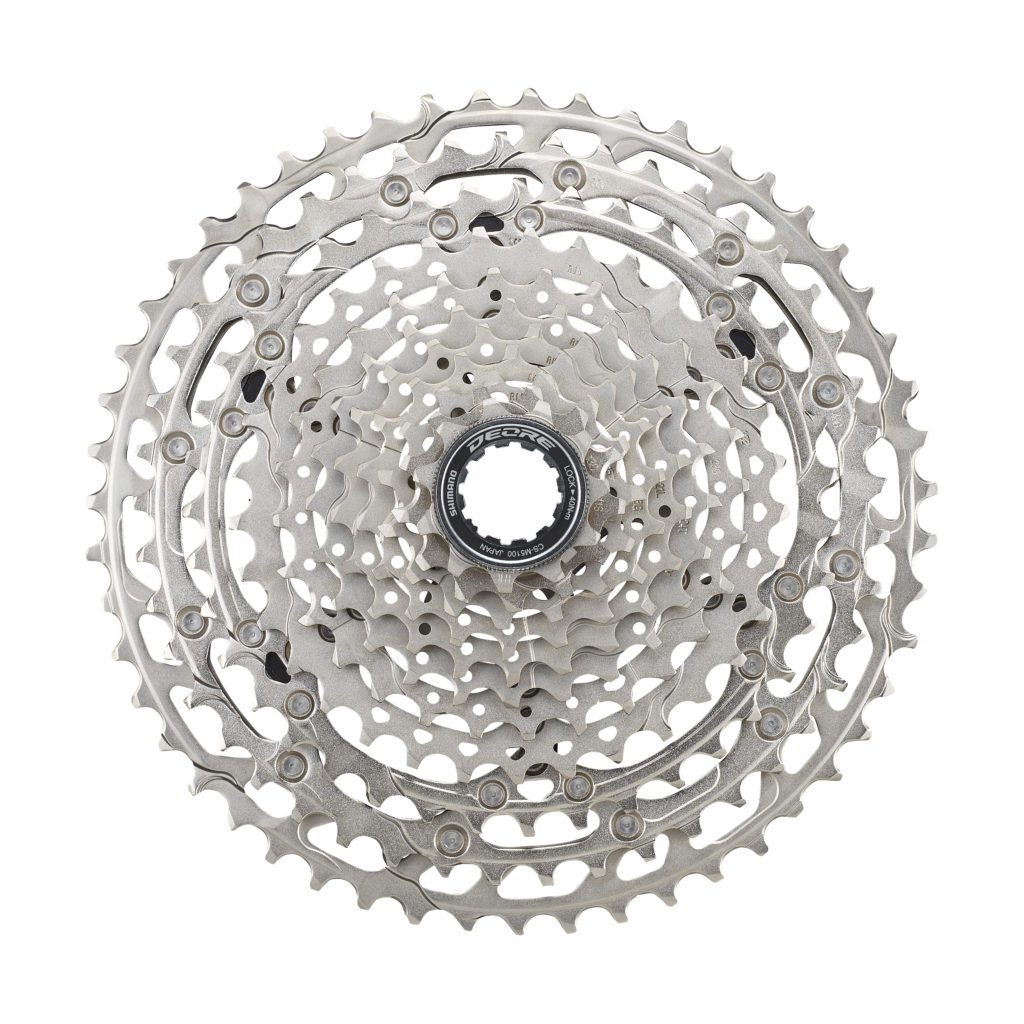 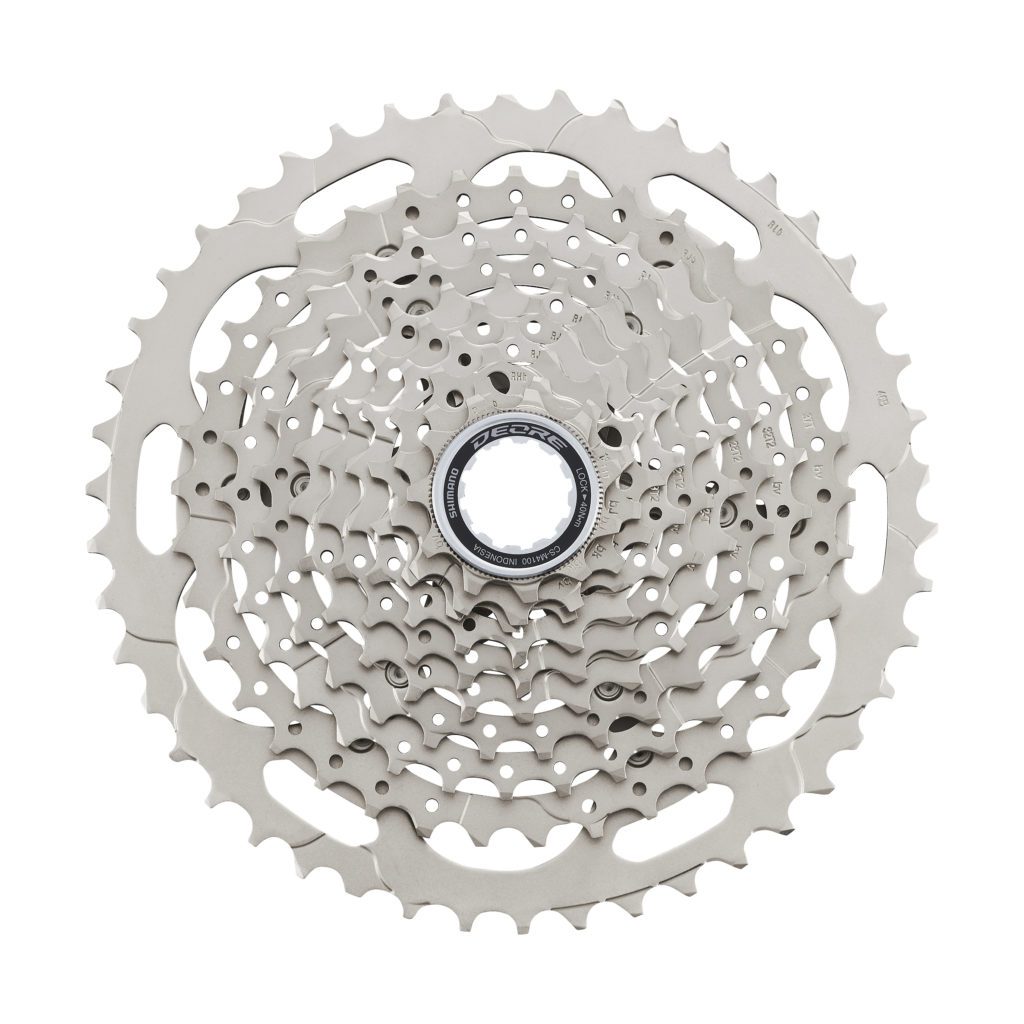 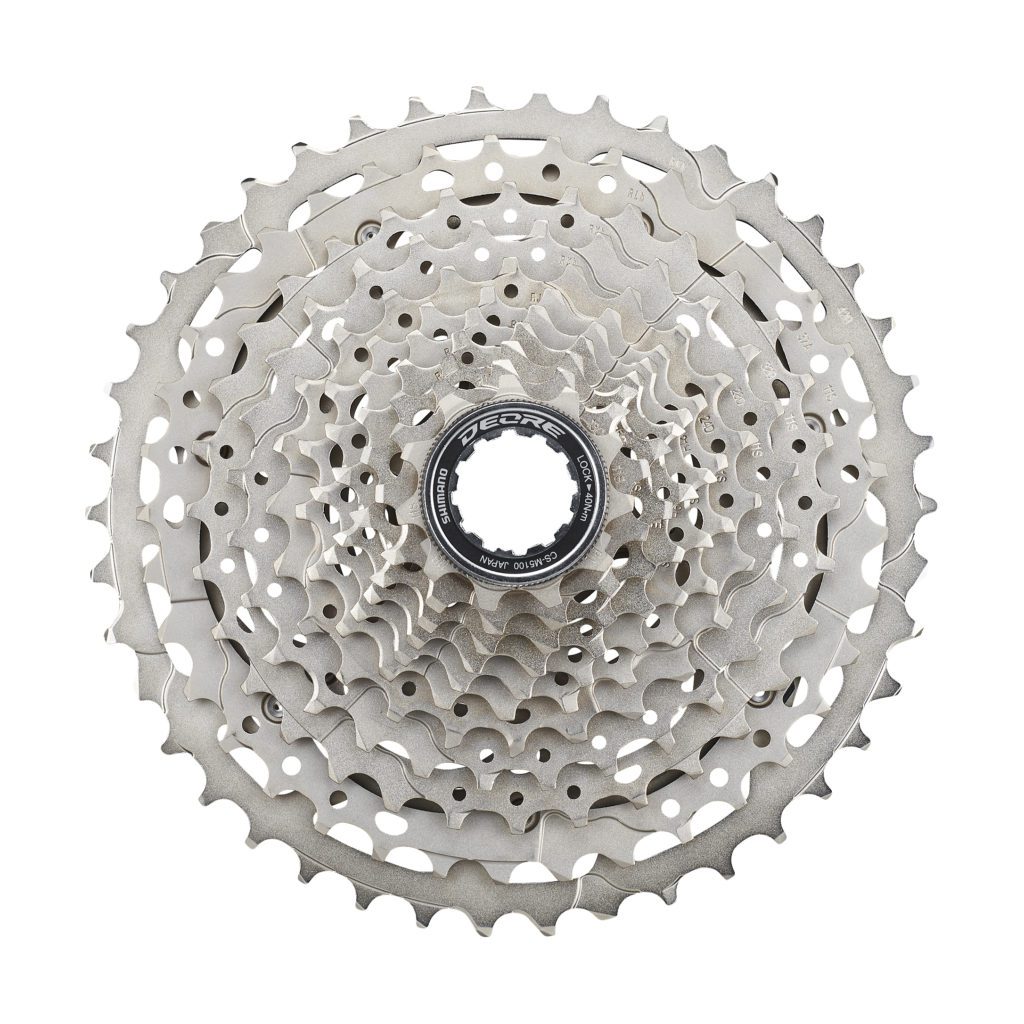 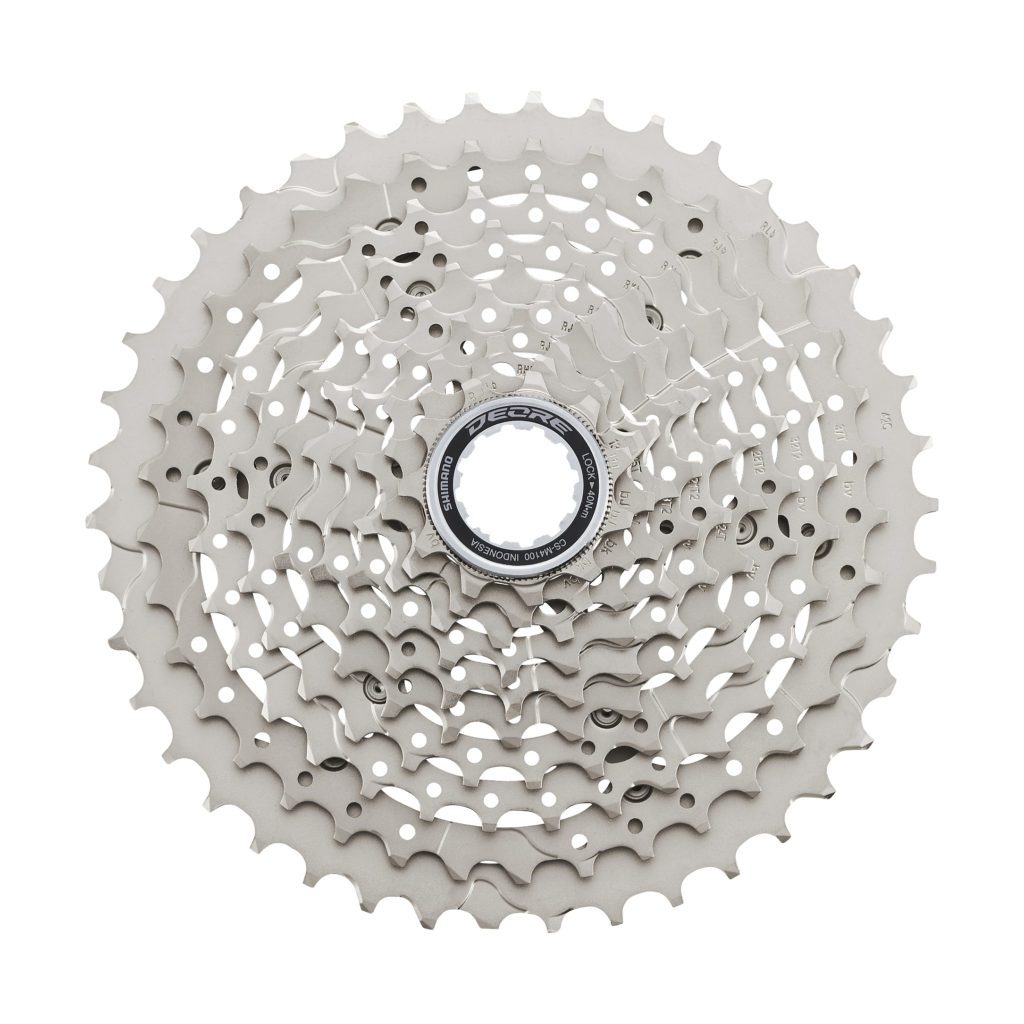 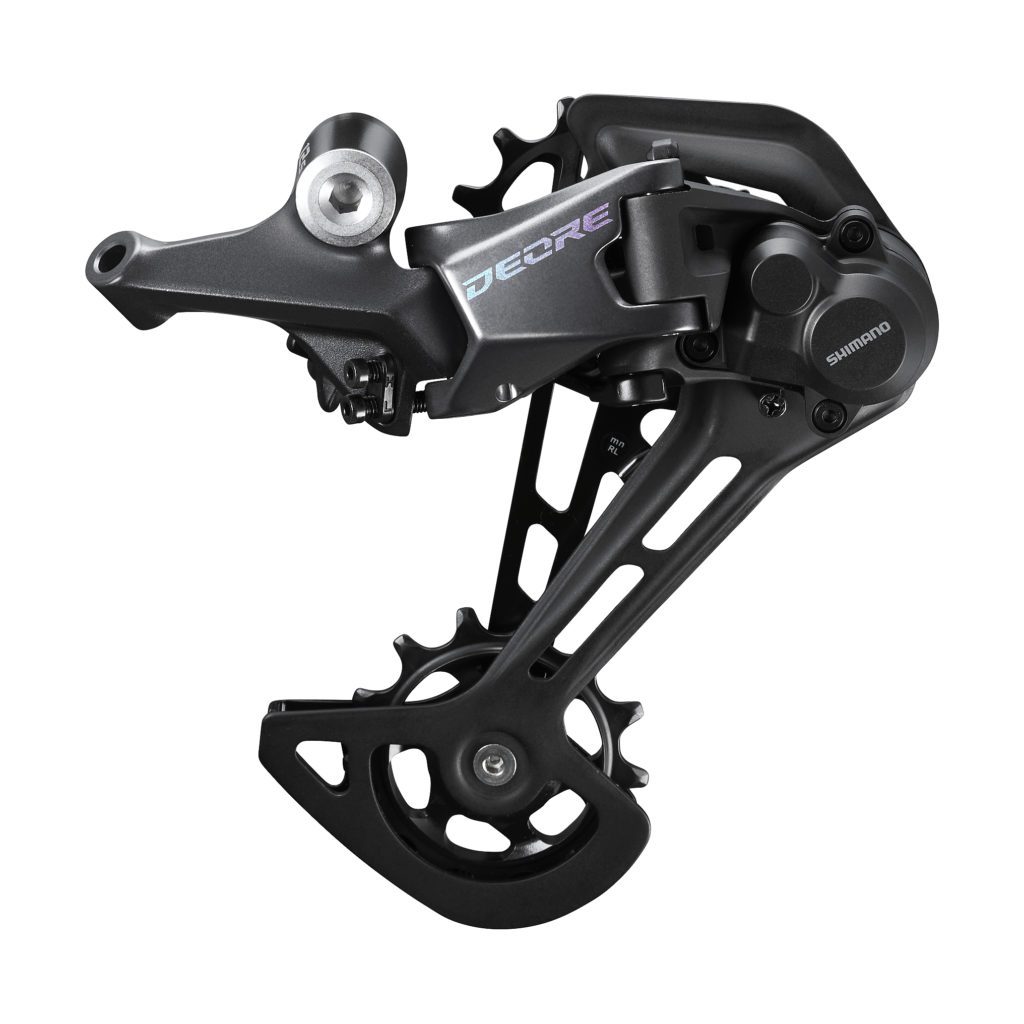 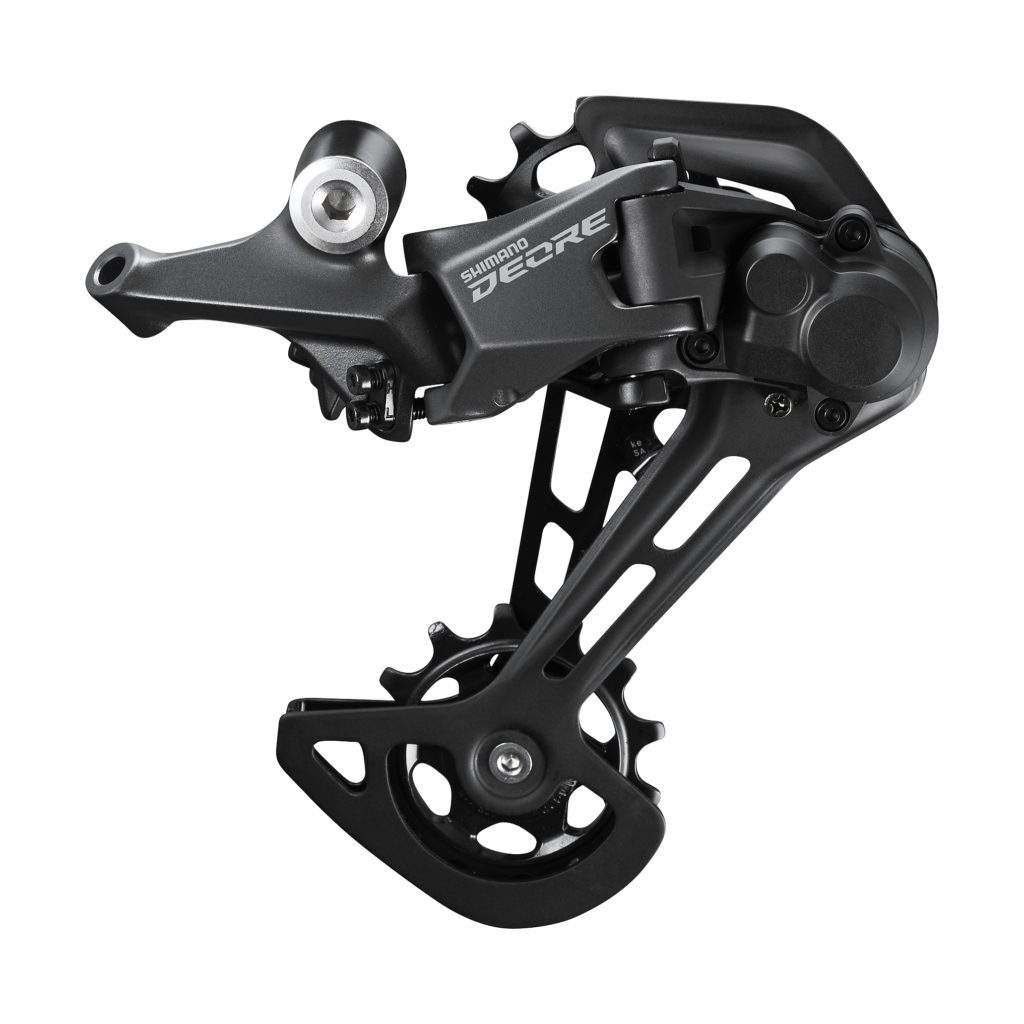 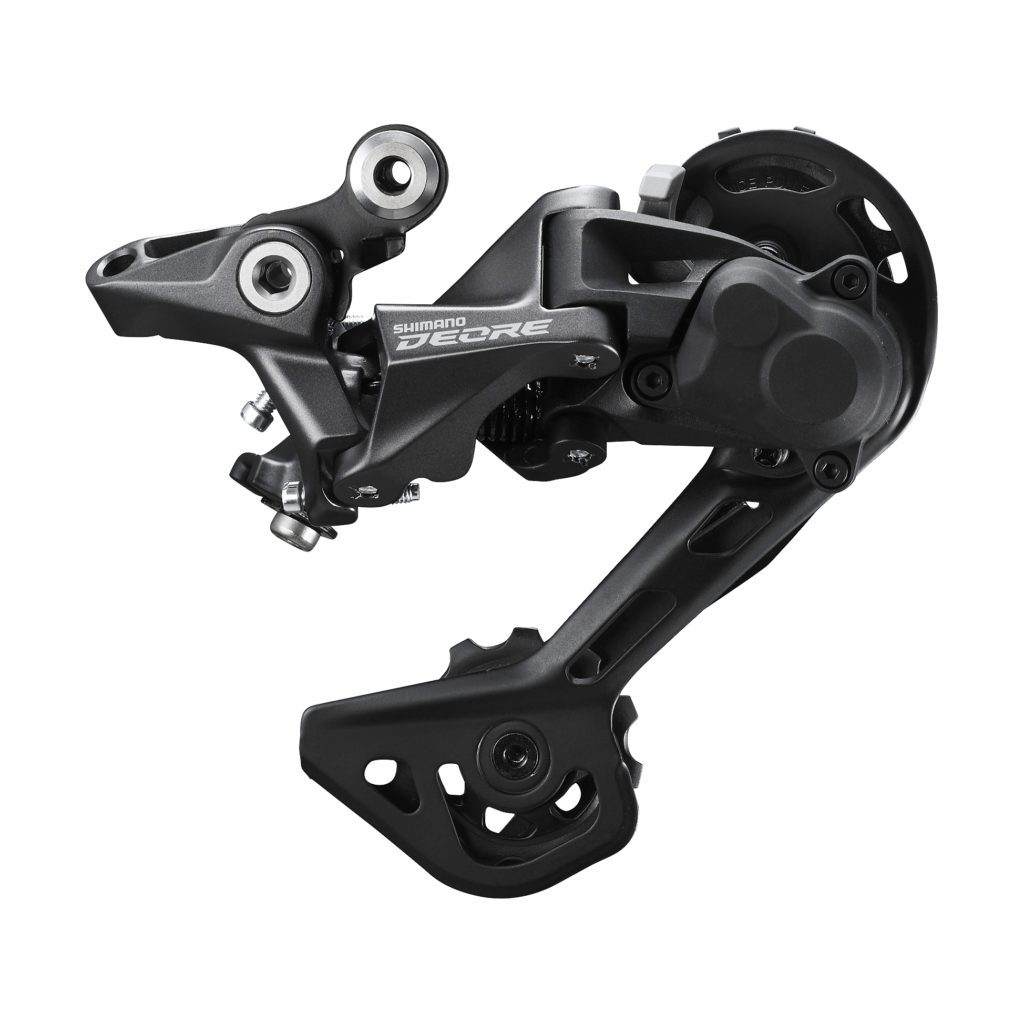 Shimano's M5120 rear derailleur only works up to 46t cogs, but can be used for 10- or 11-speed drivetrains. A M4120 derailleur is also offered, but limited to 42t cogs, and it also only uses a Shadow clutch, not the newer Shadow RD+ clutch. 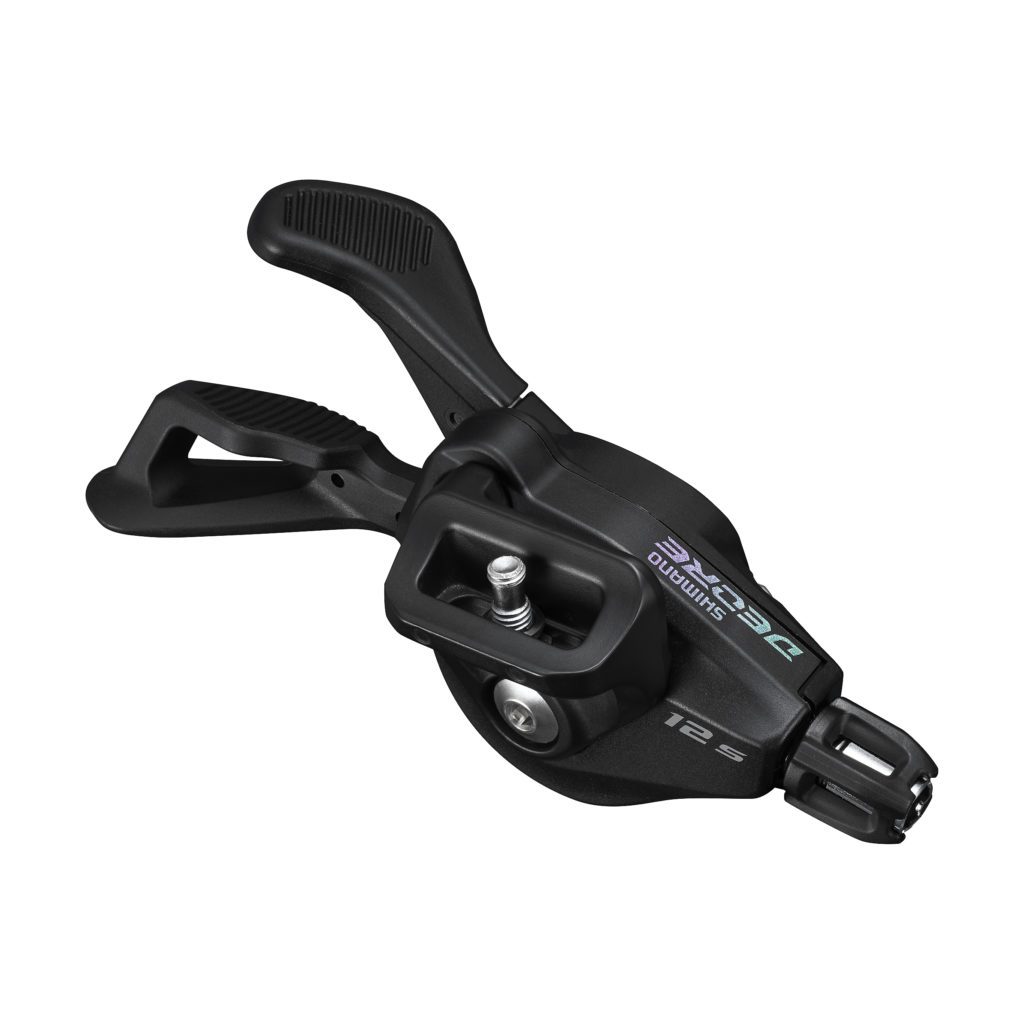 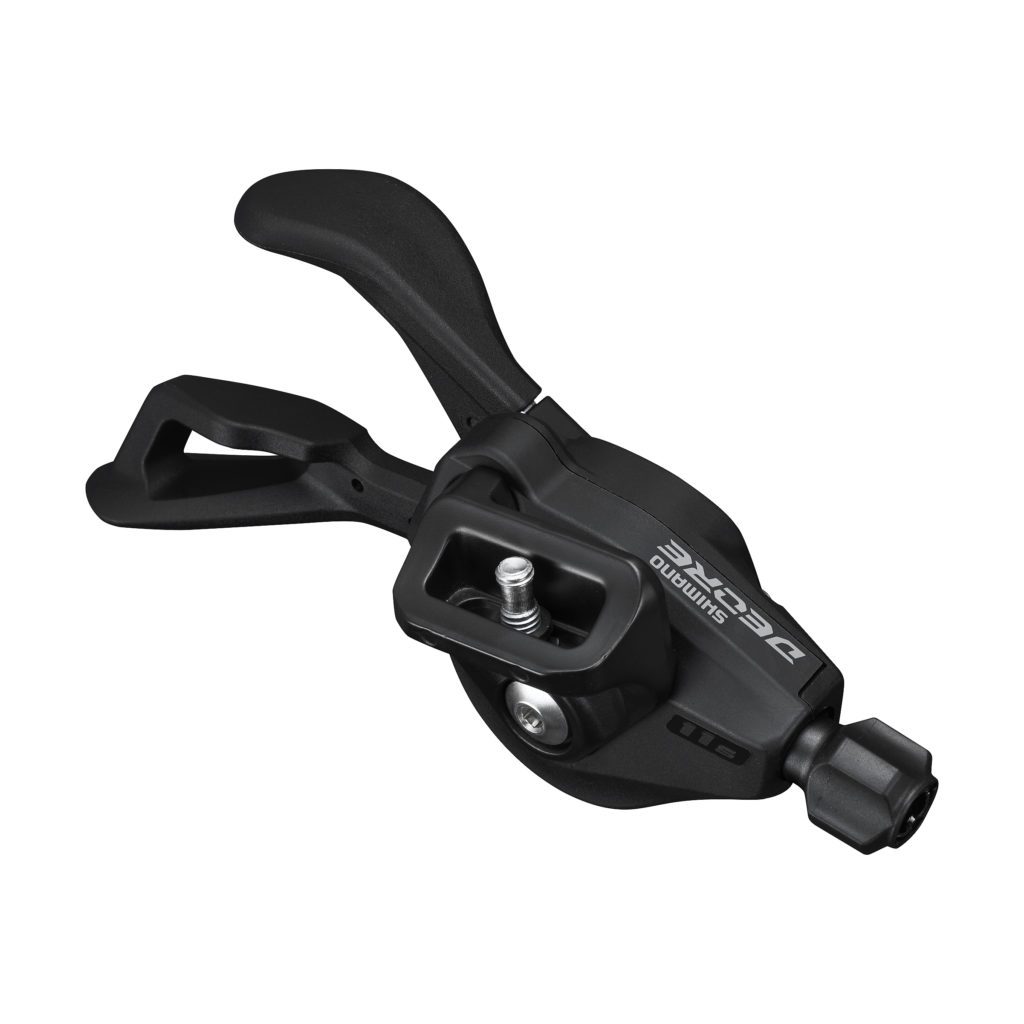 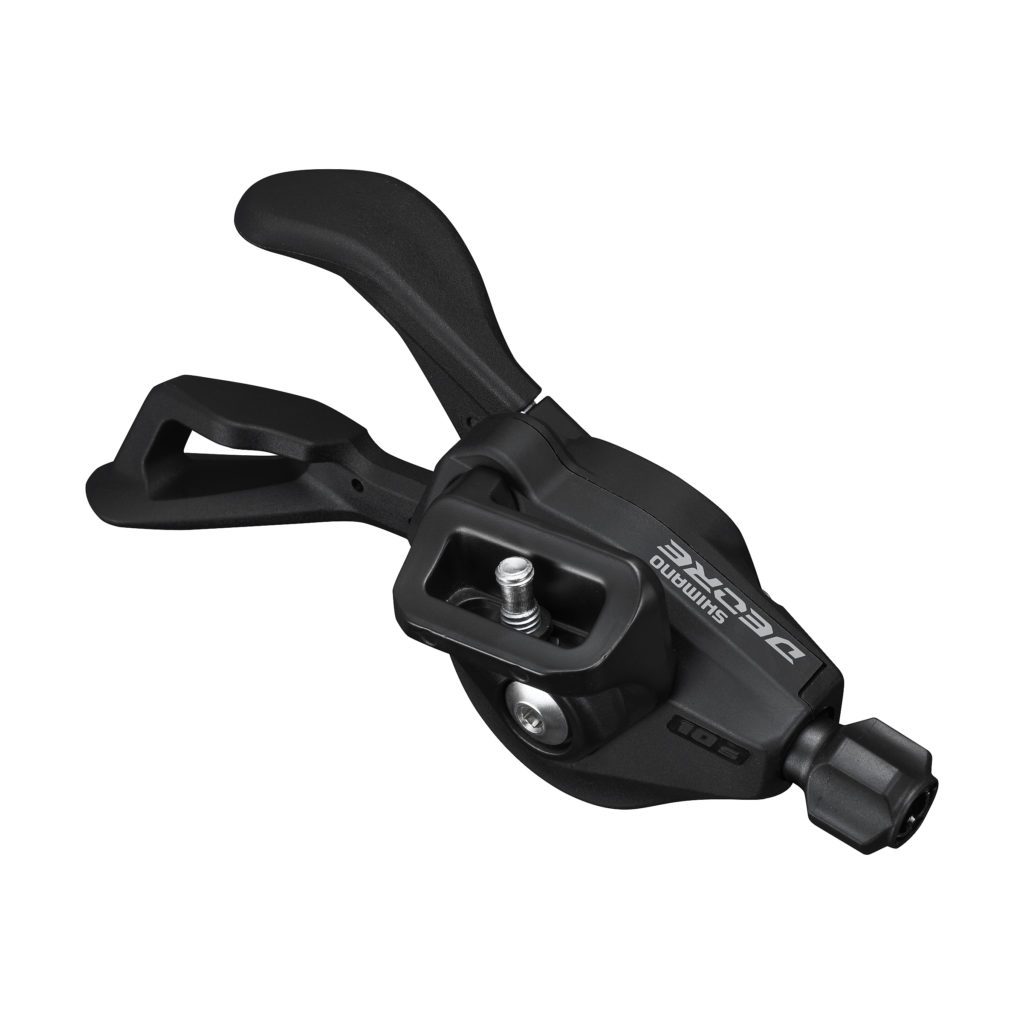 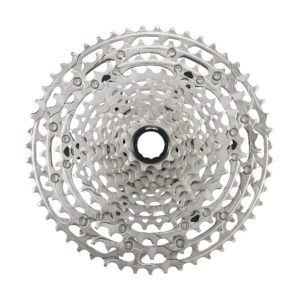 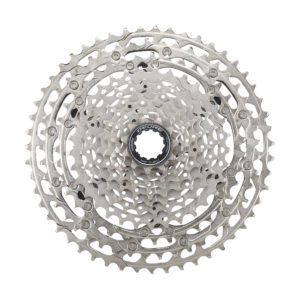 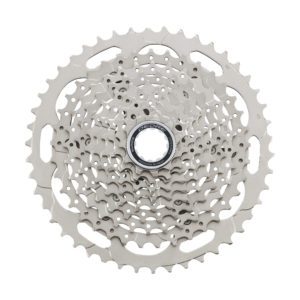 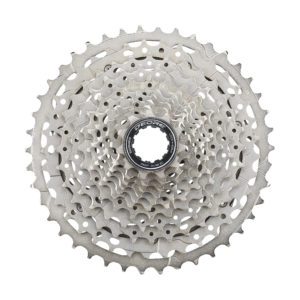 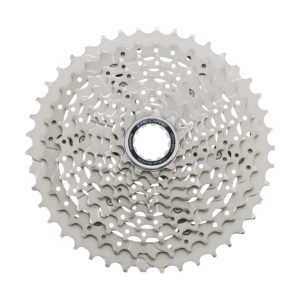 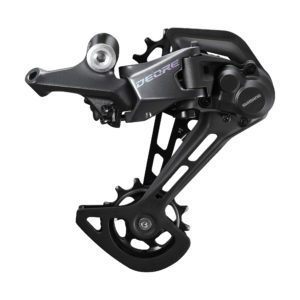 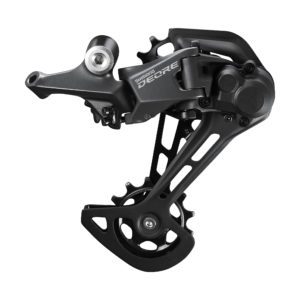 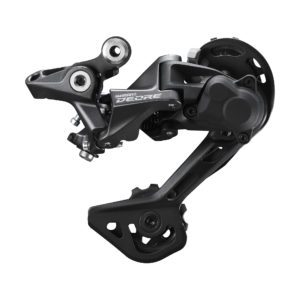 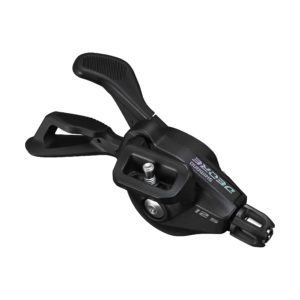 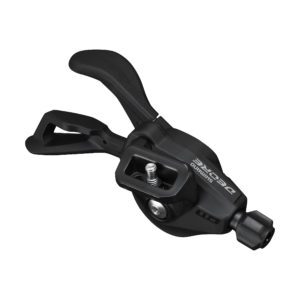 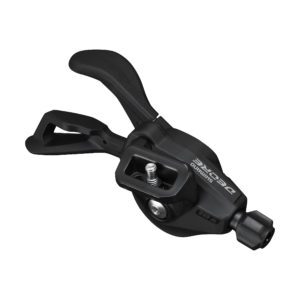 Like both 12-speed and 11-speed options, the 10-speed Deore M4100 gets a wider range than before. It also gets its own M4100 series brakes, again in two-piston or four-piston configurations.

For 1x drivetrains, 10-speed Deore includes an 11-46t cassette or an 11-42t cassette. The later is compatible with 2x drivetrains as well, for those that prefer smaller jumps between gears and a second chainring. In a neat bit of efficiency, the same rear derailleur works for both 11-speed and 10-speed Deore drivetrains.