After two days of trading wins with Casey Brown, Vaea Verbeeck took a big step towards defending her Crankworx crown. The reigning Queen of Crankworx won both downhill races, Air DH and SilverStar Downhill, to move into the overall lead in the Crankworx Summer Series.

On the men’s side, Fin Iles and Bas van Steenbergen traded wins, with one apiece. But it was slopestyle star Brett Rheeder pulling of the big surprise against the racer crowd. An Okanagan local, Rheeder stormed to a podium on his home mountain in the SilverStar DH.

Iles rides confidence to a win in SilverStar Downhill

After starting his week with a win in Enduro then adding a silver in slalom, Finn Iles was happy to be back on a downhill bike for the SilverStar DH.

“In the morning I woke up and was like ‘Oh, it’s Downhill day, this is sort of your thing. Time to go fast,’” said Iles.

“It’s been so long. It’s 10 months now since I was racing this bike. Couldn’t ask for better results to start back. The track was really fast. It was really rough, but the bike held and I held and just rode smooth and fast and stayed within all my limits. That was the goal today, to not crash. I have a bit of a streak of crashing in Downhill races. I took it like 85%…and here we are.”

Kasper Woolley was the first surprise of the day. The enduro racer claimed second behind Iles, riding on his trail bike.

The next surprise was Brett Rheeder. The slopestyle star made his first appearance of the Crankworx Summer Series count, upsetting the favorites to take third in SilverStar. All while working to learn clipless pedals, apparently.

“Well…I did a Downhill race,” Rheeder laughed from the finish corral when asked for his thoughts on the day. “It went well. I had a little section where my foot unclipped from the pedal. I’m still new to these clips and I spent so long trying to clip back in. I just got down and I was expecting to be at the back of the pack. Surprisingly I stayed pretty quick. Pretty stoked.”

Verbeek toughs it out to take a SilverStar DH win

With a compact three-week schedule squeezing in 12 races, there is little time for recovery, or injury. After crashing hard in Dual Slalom practice, Vaea Verbeeck has been working hard to stay on top of an injury, as well as the podium in Vernon.

“First thing this morning it felt horrible,” said Verbeeck. “The DH bike definitely made the bumps a bit mellower. I’m very pleased with winning tonight for sure. I kind of had no expectations again. As soon as that arm thing happened I was just focused on that and not on results. I’m just happy to be riding and happy to be in it. The win is just a huge cherry on top again.”

Behind her, Andréane Lanthier Nadeau found speed on the big bike to take her first podium during Crankworx Summer Series.

“This is definitely a return to racing for me during Crankworx,” said ALN. “I’m slowly ramping up. It was also a new bike for me, and I’ve barely raced DH ever, so it’s cool. I think sometimes we do have some stages in Enduro that approach a Downhill race, but I think that was a cool course and I had fun.”

Miranda Miller is proving to be one of the most consistent riders in the Crankworx Summer Series. The Squamish local finished third in every race at SilverStar, including the DH. Miller says she’s not yet feeling the effects of the busy schedule.

“I actually feel really good which makes me a tiny bit nervous,” said Miller after four events in a week. “It’s a good reminder to keep everything in check and still be wary. Even though you feel really good, things can change so quickly. We saw that yesterday with a few people. It’s important to get off your feet when you can, eat as much as you can, drink lots of water. It’s going to be hard to keep that up for three weeks.” 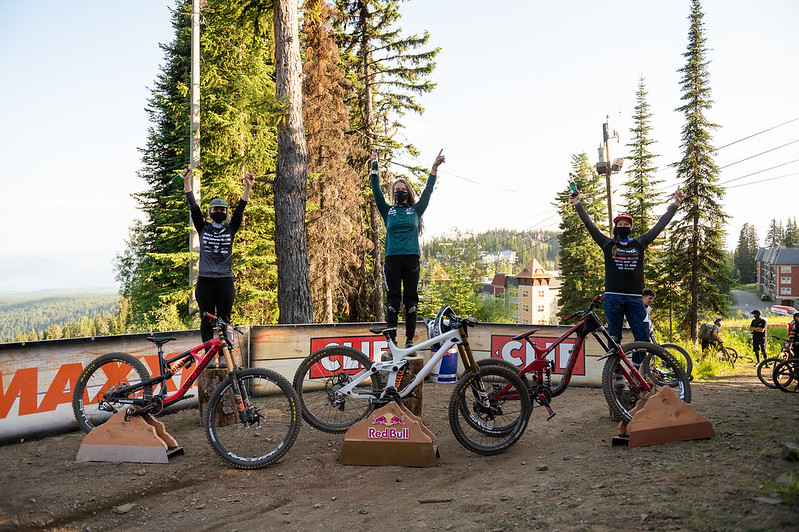 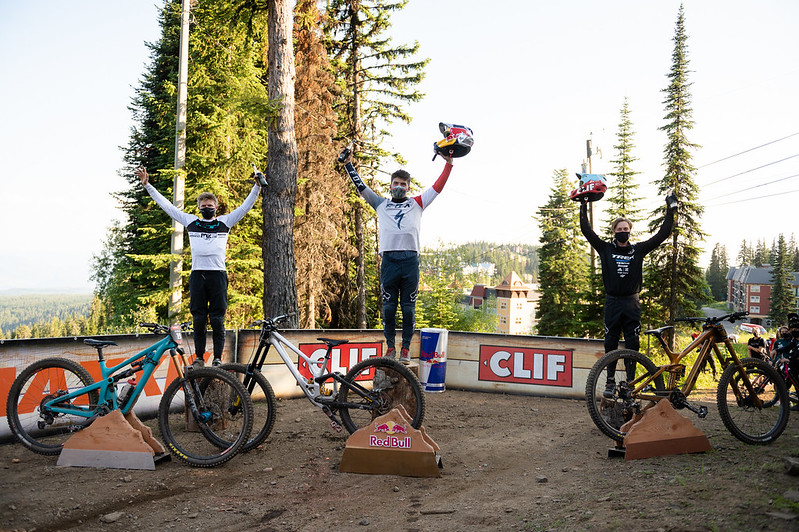 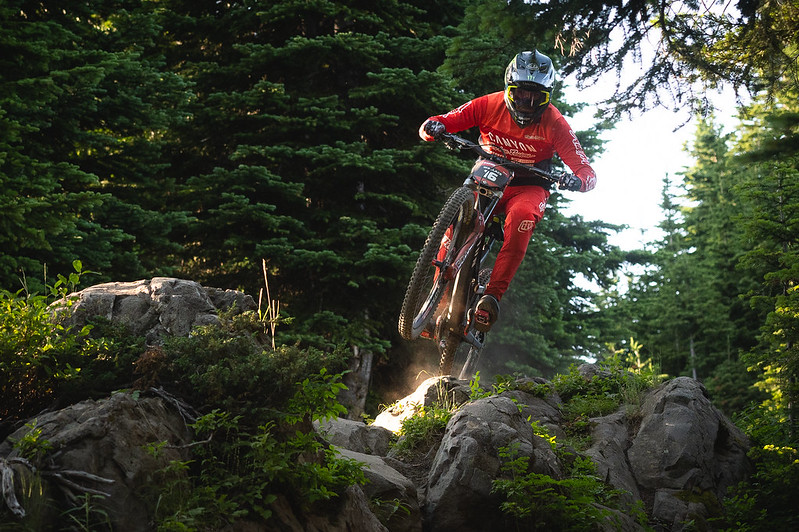 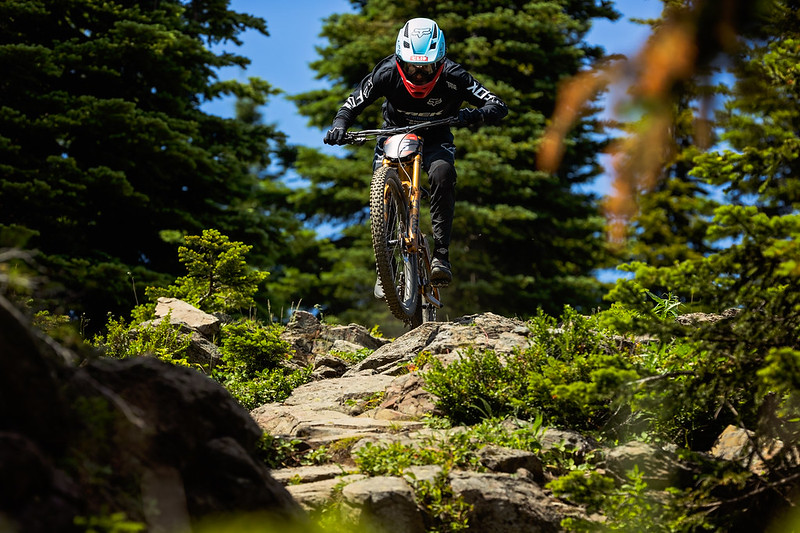 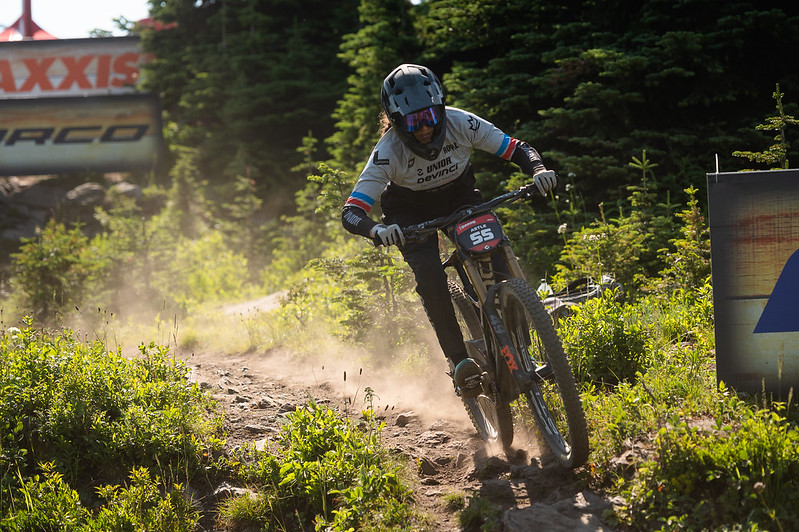 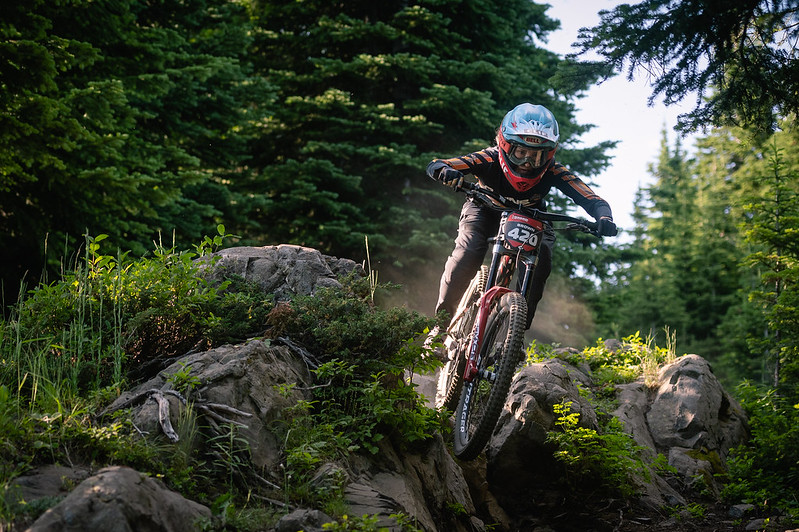 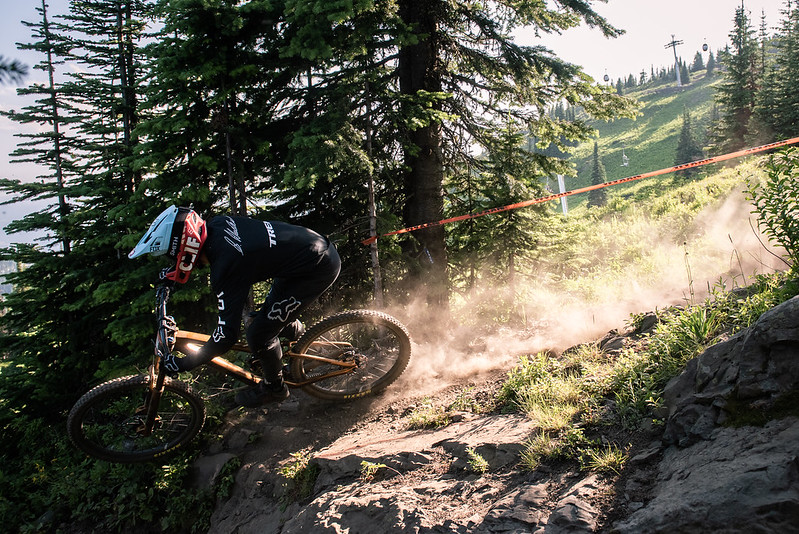 Brett Rheeder was too fast for the camera, and almost all the other racers at SilverStar. Photo: Chirs Pilling. 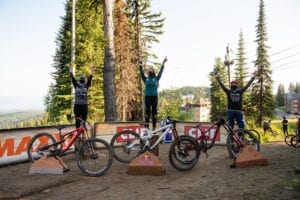 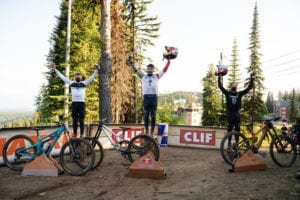 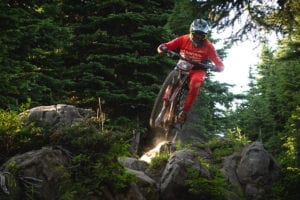 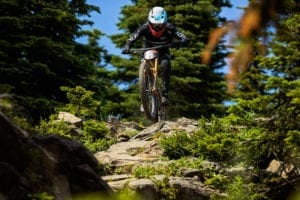 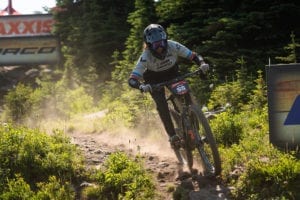 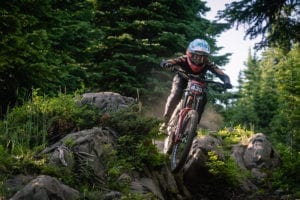 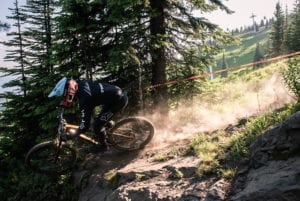 Air Downhill was the final event in a busy week at SilverStar Bike Park. After a week of heat, dust and racing, it was a mix of endurance and max speed needed to win.

Vaea Verbeeck sailed to a third win in four days, and the lead in the Crankworx Summer Series overall standing. Behind the Crankworx Queen was Casey Brown, who also sits second in the overall. Miranda Miller completed her collection of bronzes, taking third in the Air DH.

On the men’s side, Bas van Steenbergen scored his second win at SilverStar this week. He edged out Finn Iles for the Air DH win. Kasper Woolley, a growing concern in the Crankworx Summer Series, nabbed another podium by finishing third. 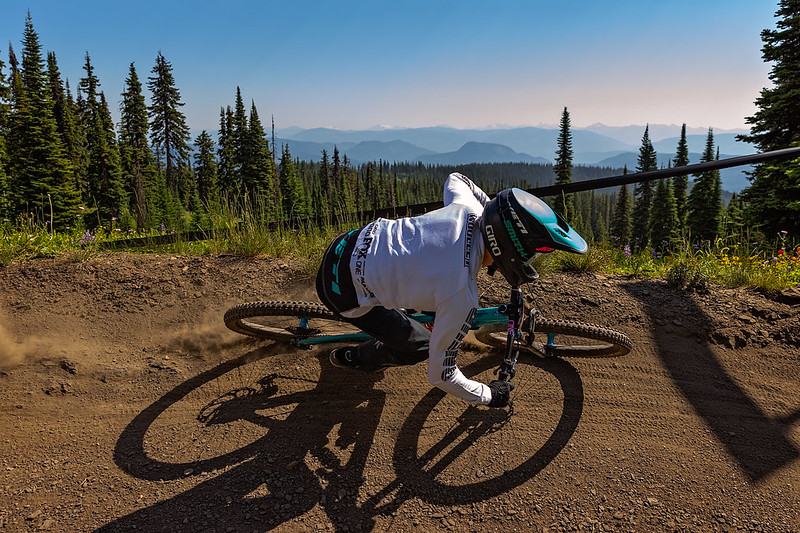 Kasper Woolley ignoring the view over Vernon on his way to the podium. Photo: Clint Trahan. 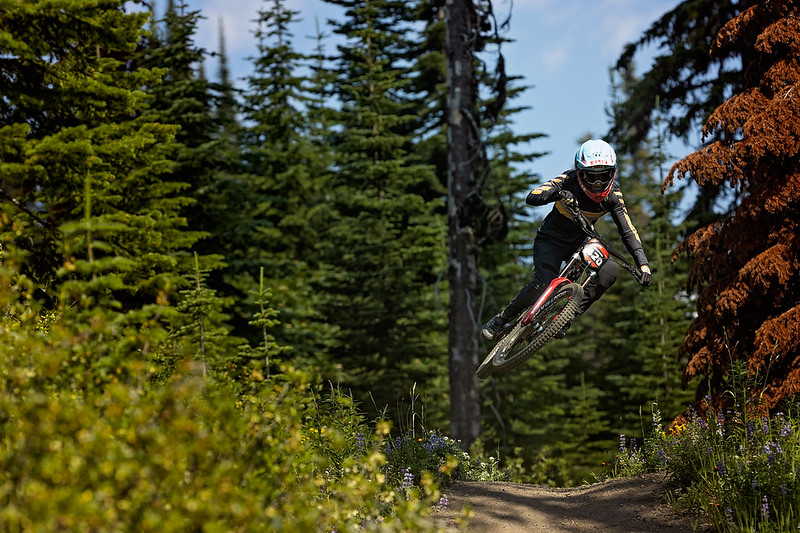 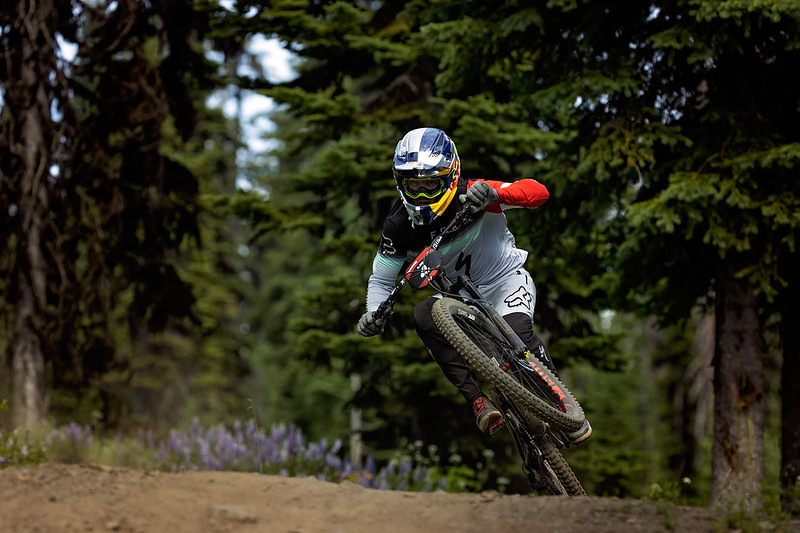 Finn Iles scrubbed to second, even with a mechanical. Photo: Clint Trahan. 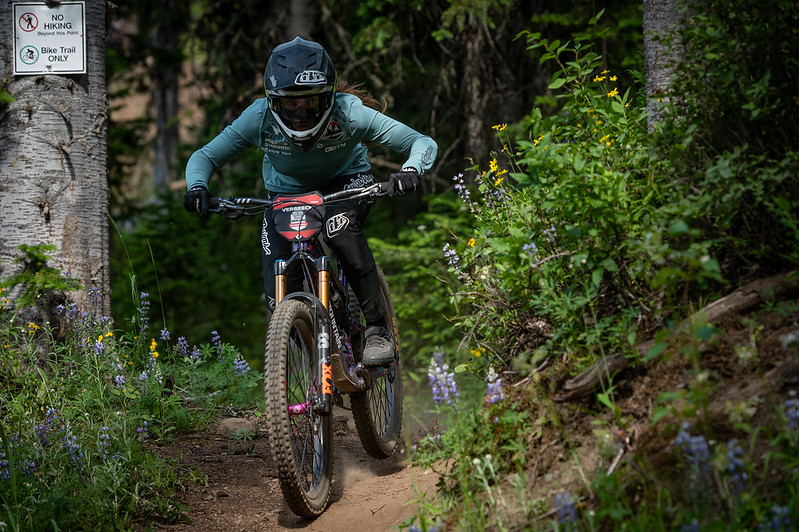 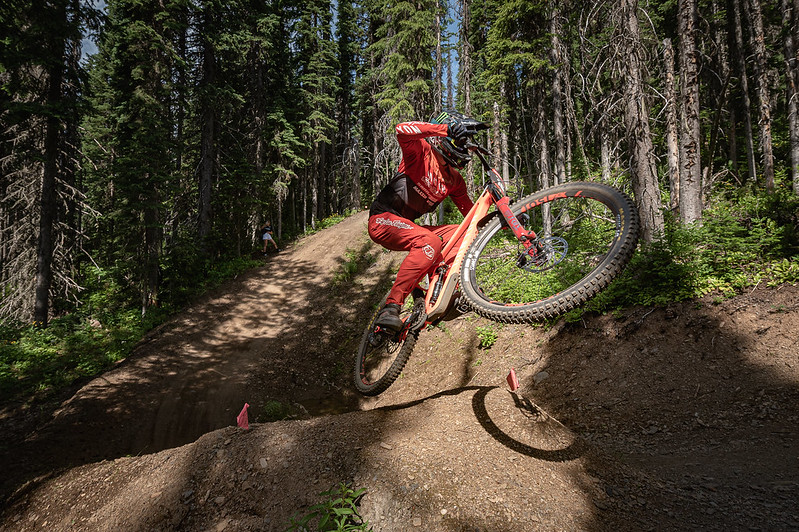 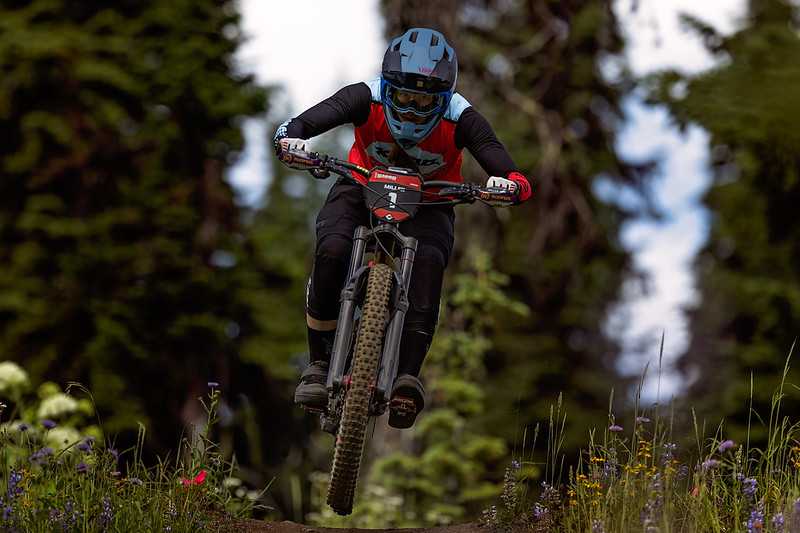 Miranda Miller with another podium. 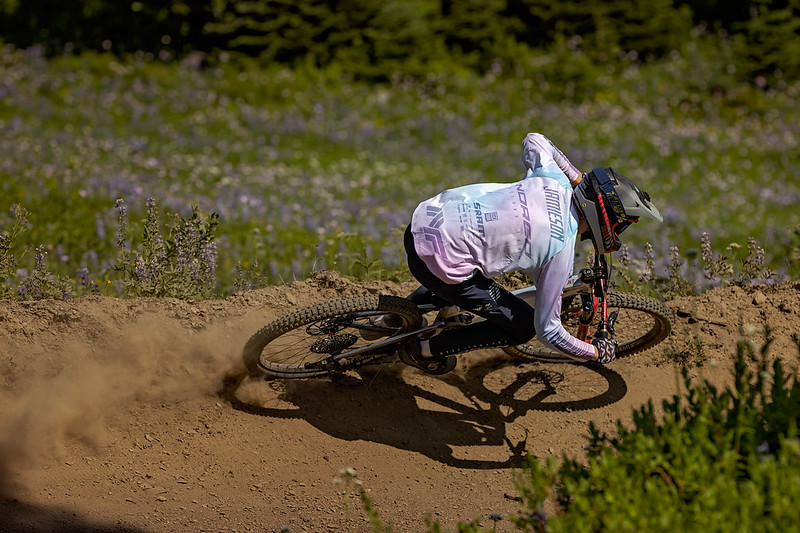 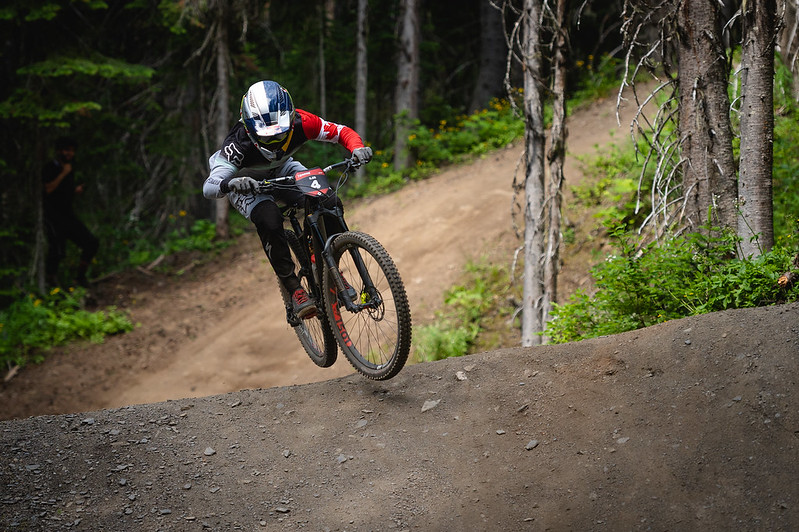 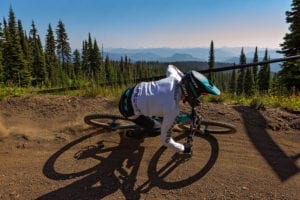 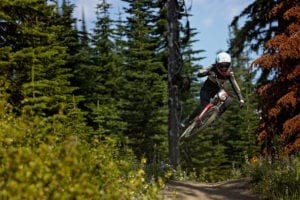 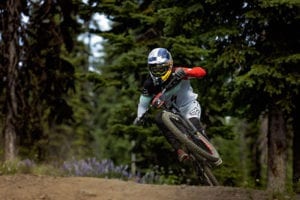 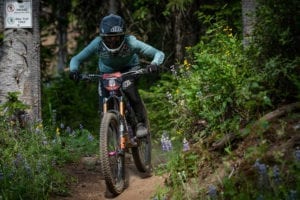 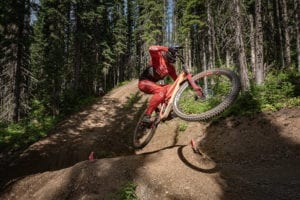 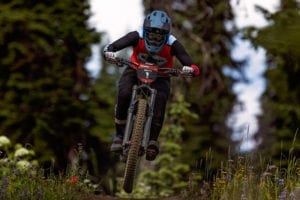 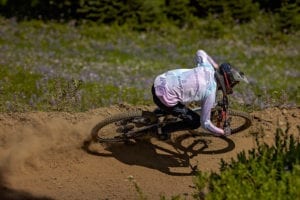 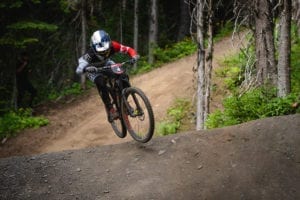