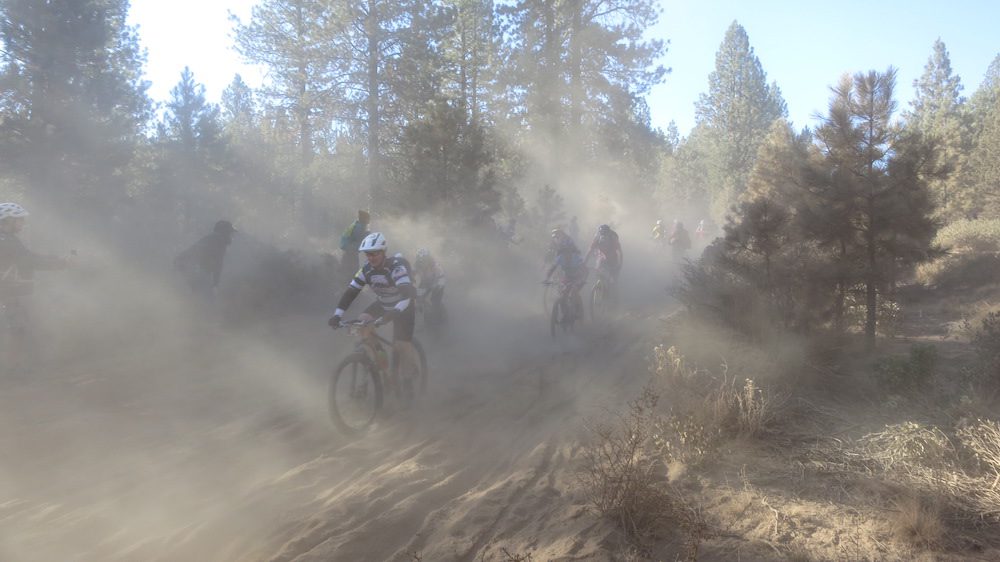 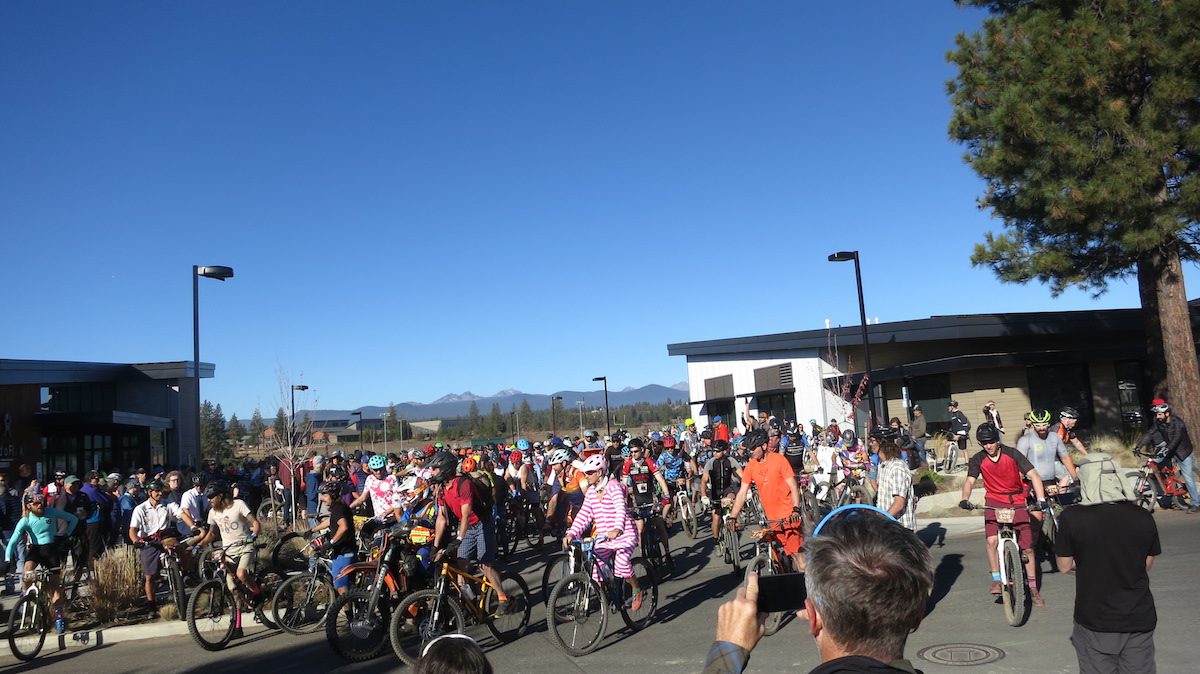 SSWC has a reputation as a hard partying event, but that’s not all it is. Yes, there was a party. Or two. And maybe a couple more. But there was also a legitimately demanding course that took a big effort to finish on one gear, never mind race. And there were people who were very much racing. Look through the names scrawled in felt marker across the top-10 male and female finishers and you see World Cup racers and legends of North American cycling. Carl Decker not only helped design and build the course and host the event, he also raced to second place behind Red Bull athlete and 2017 US XCM national champion Payson MceLveen. Rachel Lloyd, pro mountain biker and cyclocrosser, claimed her second SSWC tattoo in the women’s race. 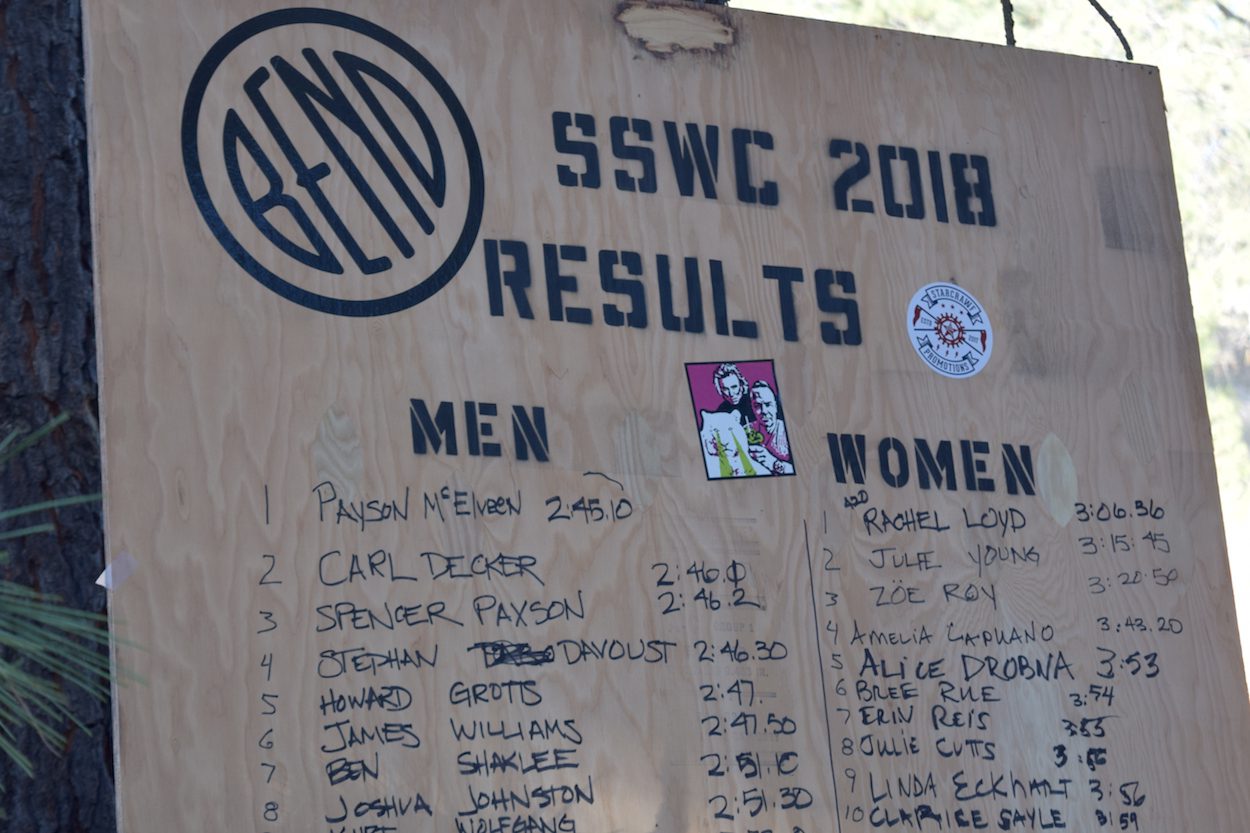 700 starters took on a 40 mile course, with 4,000 ft. of climbing. For those of us from north of the border, it was about 63km and 1,400m of elevation – before the 10km mandatory ride back into town from the remote finish area. 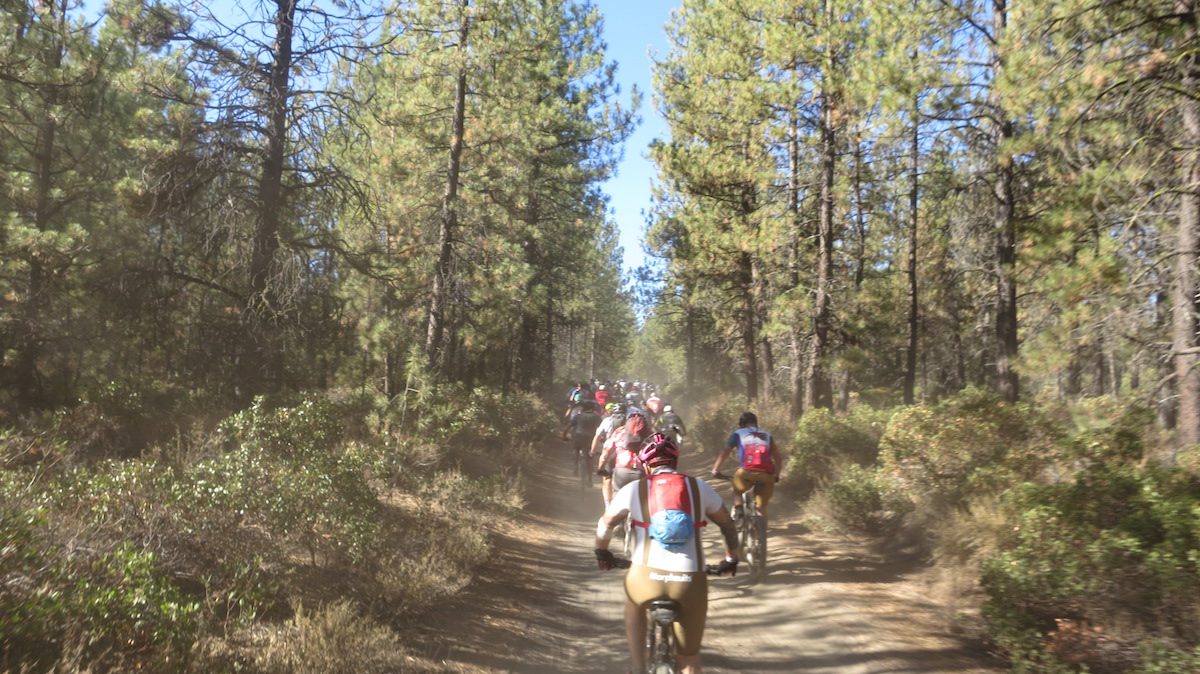 The proceedings took place in Bend, Oregon, the outdoor playground town located in the Central Oregon. Bend is home to all sorts of outdoor activities, from skiing and mountain biking to kayaking, stand up paddle boarding, climbing, hiking and whatever else you could imagine. There’s even a standing wave next to Mirror Pond in downtown Bend we saw someone surfing on Sunday. 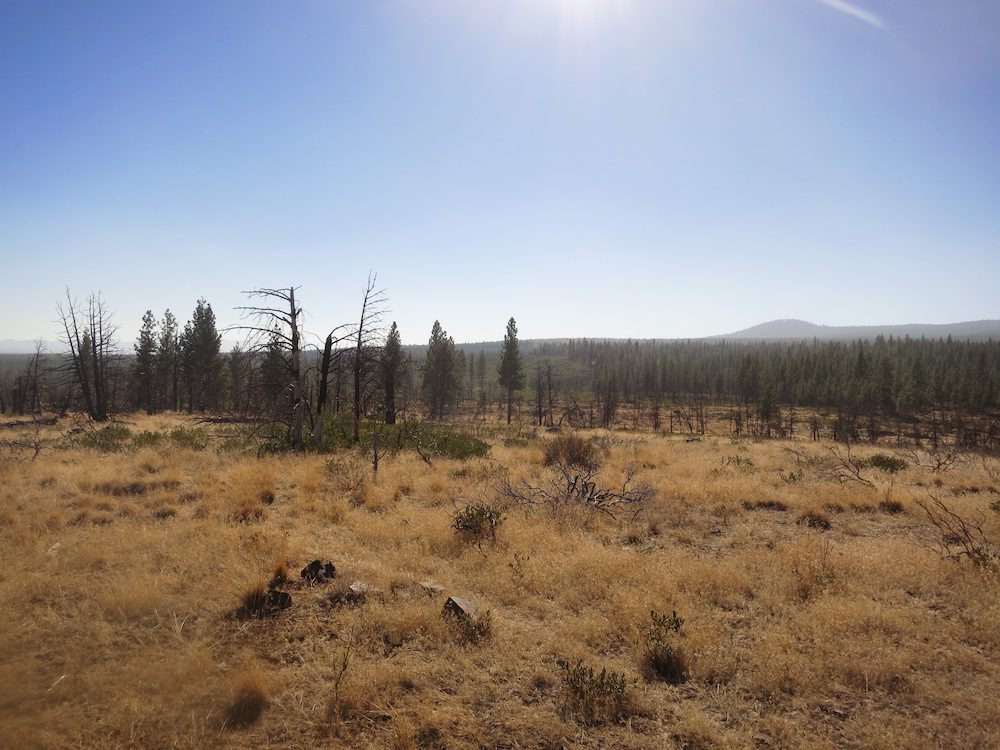 It’s not surprising, then, that there was a huge contingent of locals lining up for the race. Not that there was much of a locals advantage, other than a level of comfort riding moon dust-dry trails. Much of the course was created just for the race, or connecting moto trails and surprisingly fun double track sections. Organizers said they wanted to get back to the roots of mountain biking – exploring out in the woods far from town. They definitely delivered on that front. The course ranged far, far from the comforts and craft beers of downtown Bend – though each of the several aid stations made sure some of the latter made it into the woods to help keep racers hydrated during their efforts. 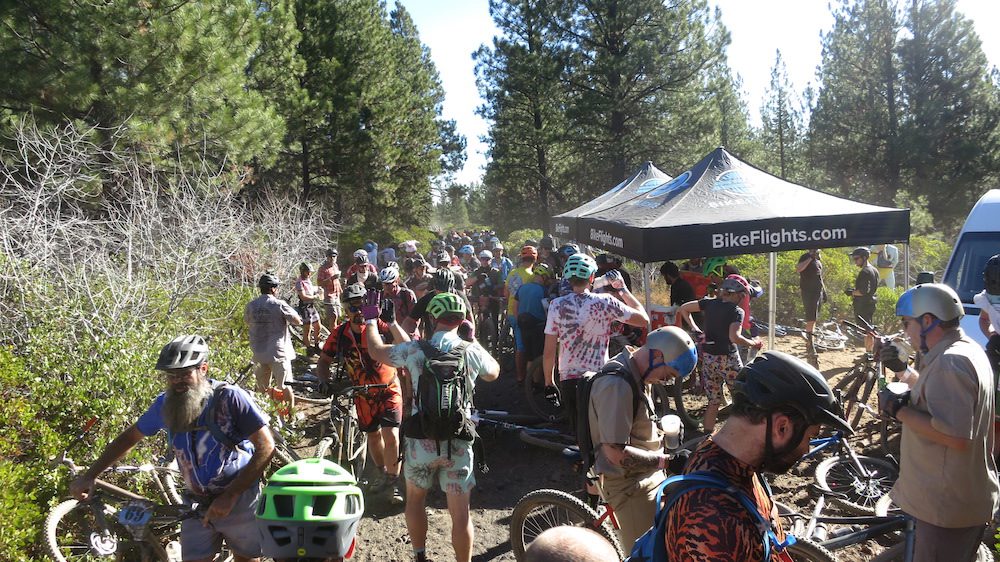 Bend has many, incredible purpose built mountain bike trails, which were sampled before and after Saturday’s race on the many group rides locals organized for the visitors. But the race itself was an altogether different experience. The course itself was a massive, meandering loop that took racers into some pretty remote areas well outside Bend. 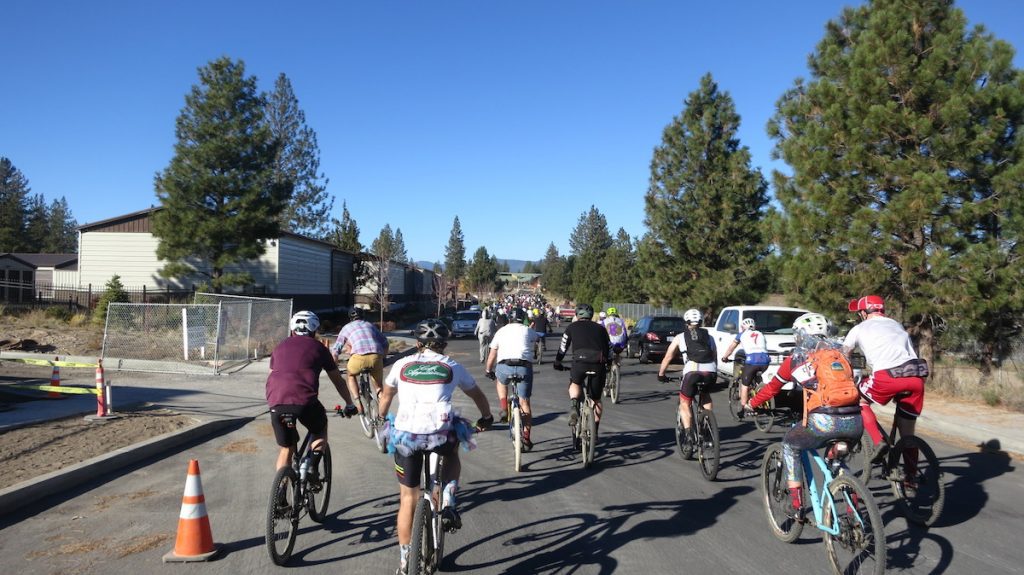 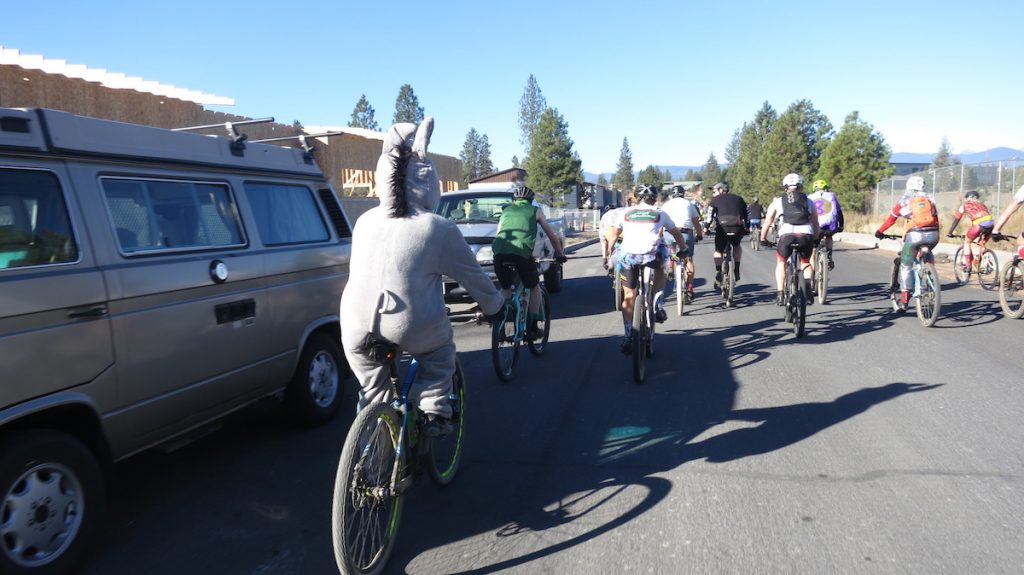 Some costumes were more committing than others. Average temperature on race day was about 30-deg Celcius 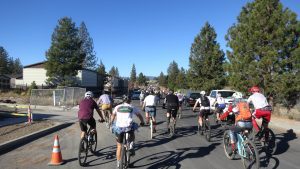 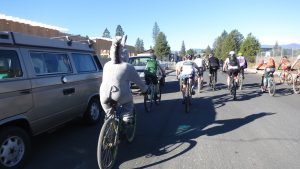 A paved neutral roll out started to spread out the massive field of riders. While the event doesn’t hide it’s hard partying personality, this was still a real course, and there were still people who were racing at the front. there were plenty of costumes and different outfits, but speeds ranged from ‘make it through’ to a blistering 2hr 45 minute finish time – around 21.5 km/hr average speed  – for the winners. 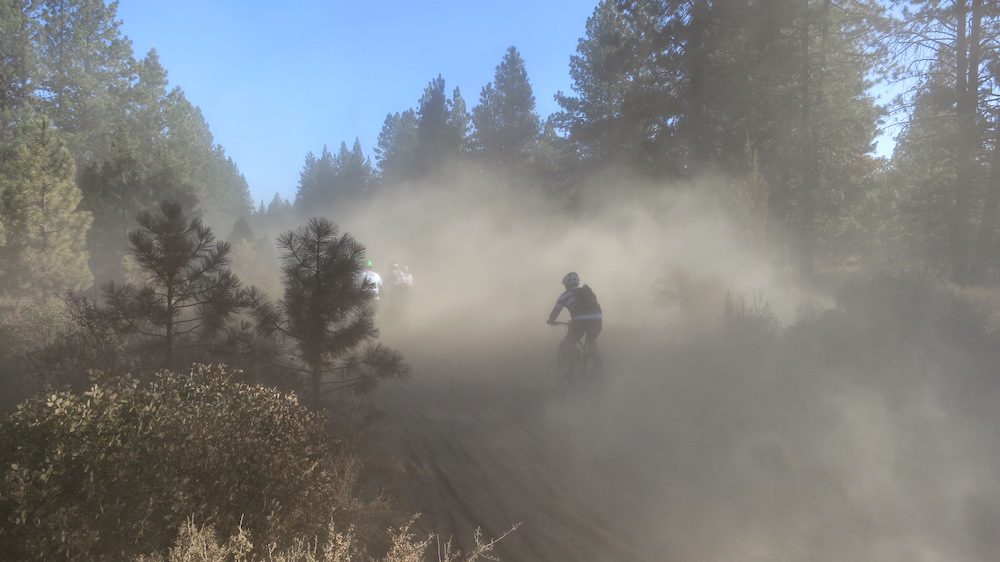 Course features – as soon as the gun fired, and an actual gun was fired to start the race, tires hit dirt, and a cloud of dust billowed up that wouldn’t settle until well after the last rider had passed. Here’s some highlights from what followed: 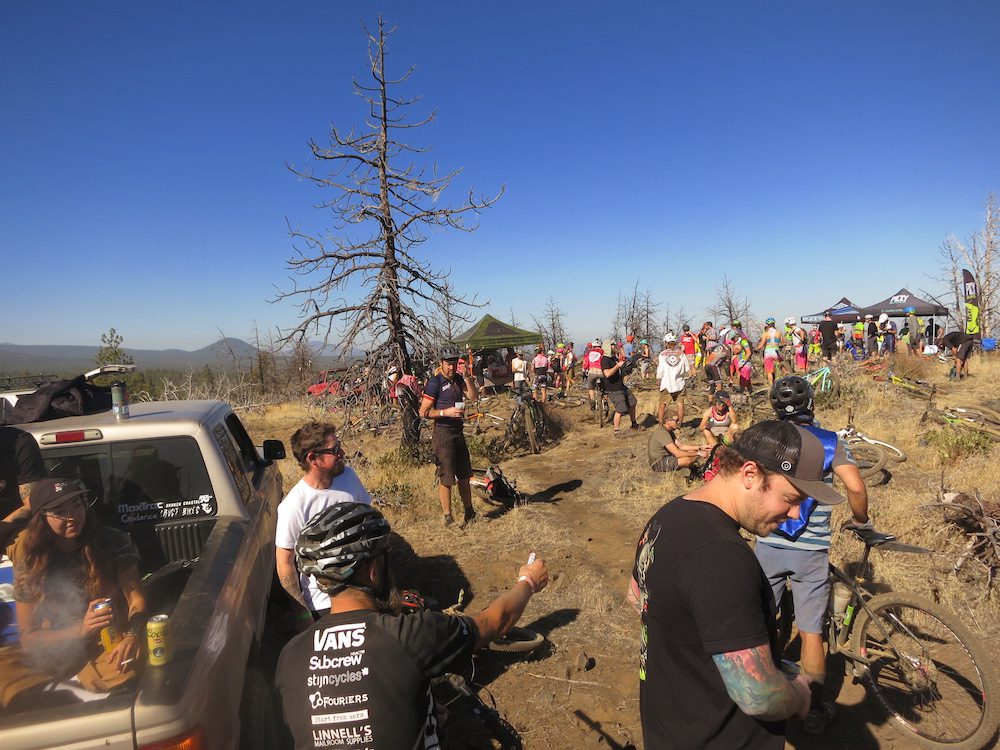 Well stocked aid stations, with everything from kegs and margaritas, actual sports nutrition from Skratch Labs, and Canada’s newest recreational substance. All carted far from the Bend town center by an amazing army of volunteers.

At one, far off switch back climb, there was a full band playing in the woods. On another remote and desolate corner of the course, Carl Deker’s father was playing trombone. 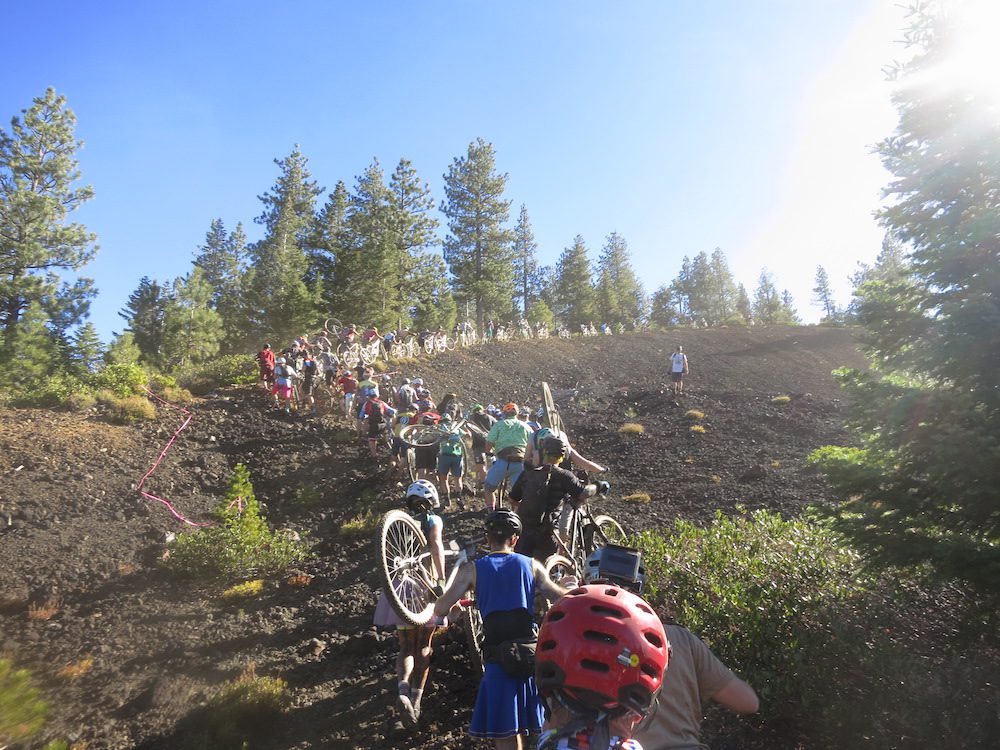 Hospital Hill. After an extended climb, racers hit a steep, loose pumice and sand hike-a-bike up a cinder cone to the course’s high point. Refreshments were served at aid station at the top and the course dropped down Hospital Hill – a wildly steep descent of ankle deep loose dust with multiple line choices that put many out of their element. Somehow, a solid crowd has made their way into the woods to watch the action.

Phil Wood’s crew stamping the metal race plates (everyone had either #420 or #69) to mark the far point of the second, long course loop. 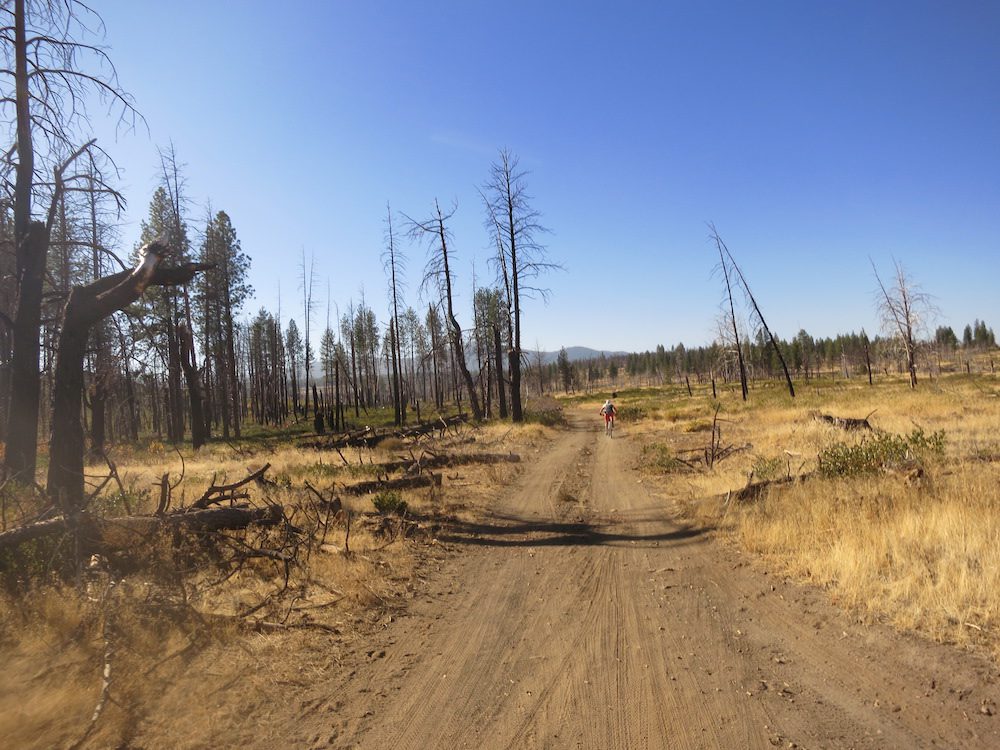 Riding through multiple old forest fire burn zones. The area around Bend is bone dry much of the year, and forest fires are a common occurrence. The course wound its way through several burnt out areas of woods in various states of recovery.

A mile long gully, sending riders whooping from side to side in a endless, low angle flow section. 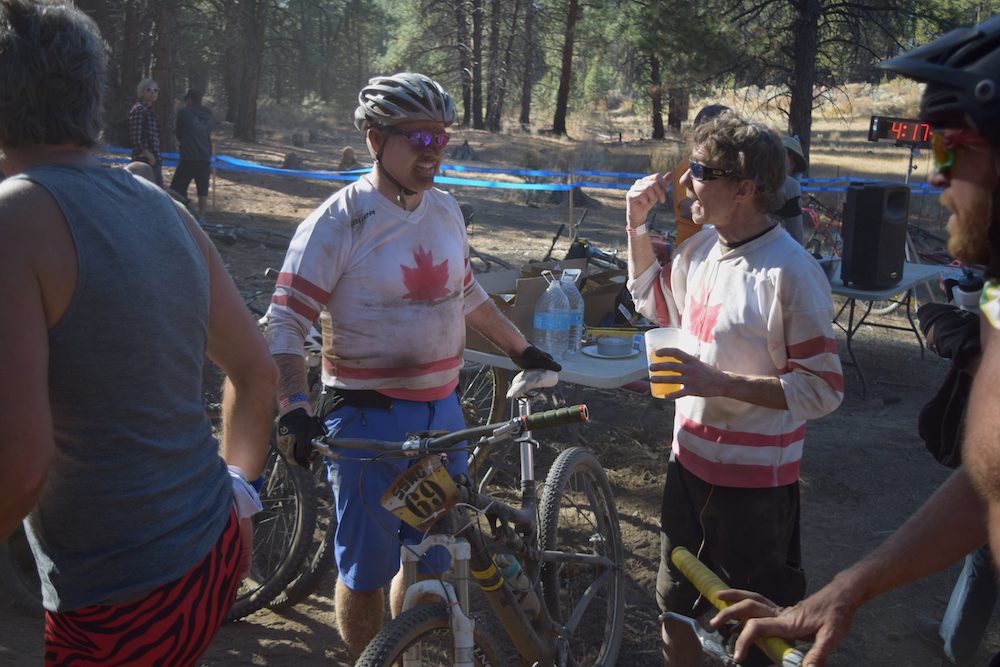 The Rossland crew had home made '76 Hockey jerseys 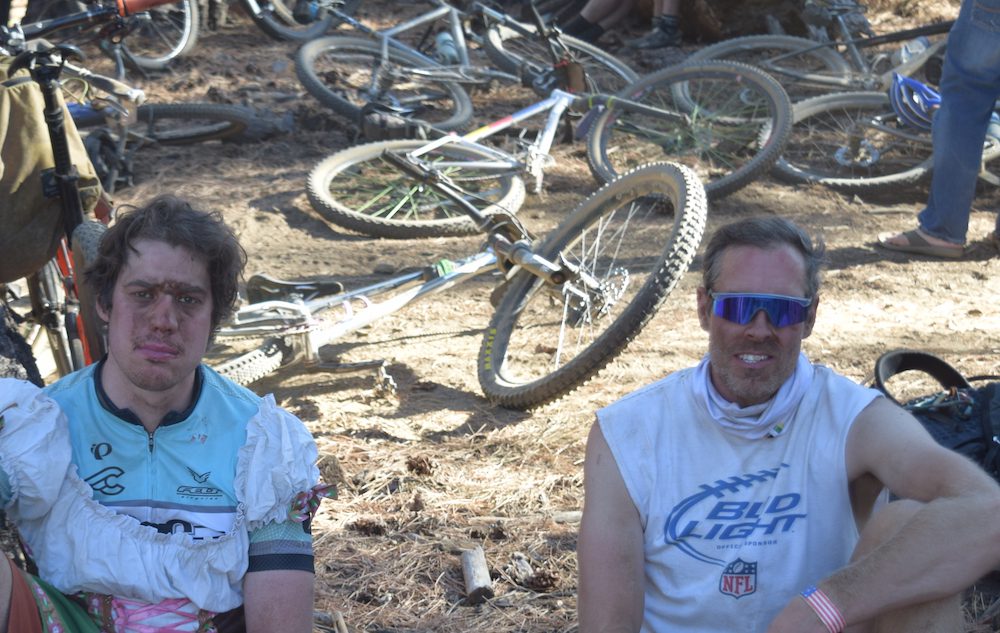 A thick layer of dust coated riders at the finish line. Part of the Victoria contingent recovers from the effort 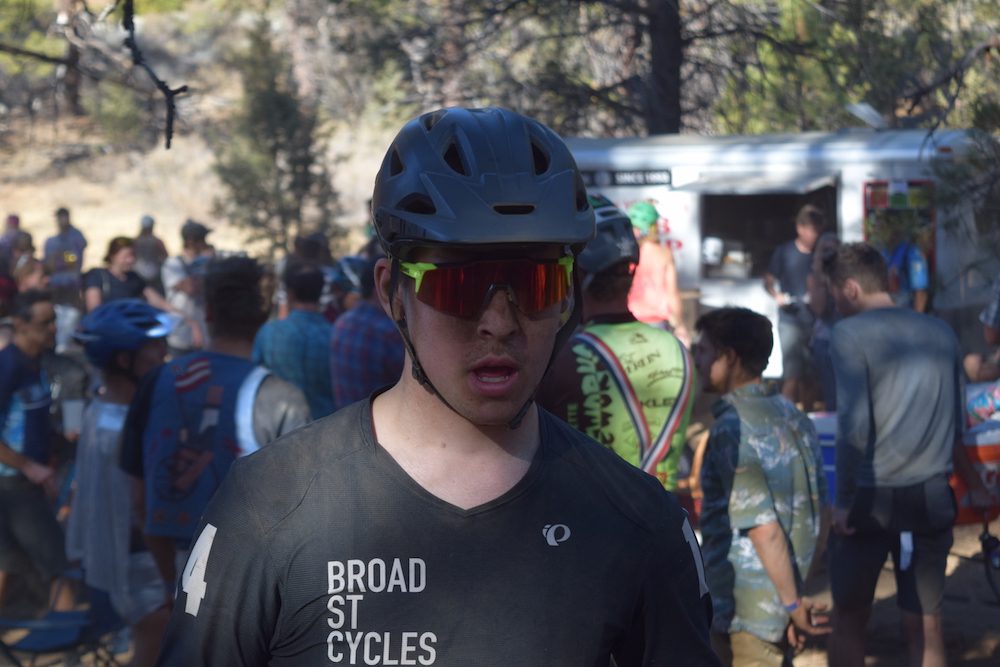 A little big of that shell-shocked look immediately post-finish 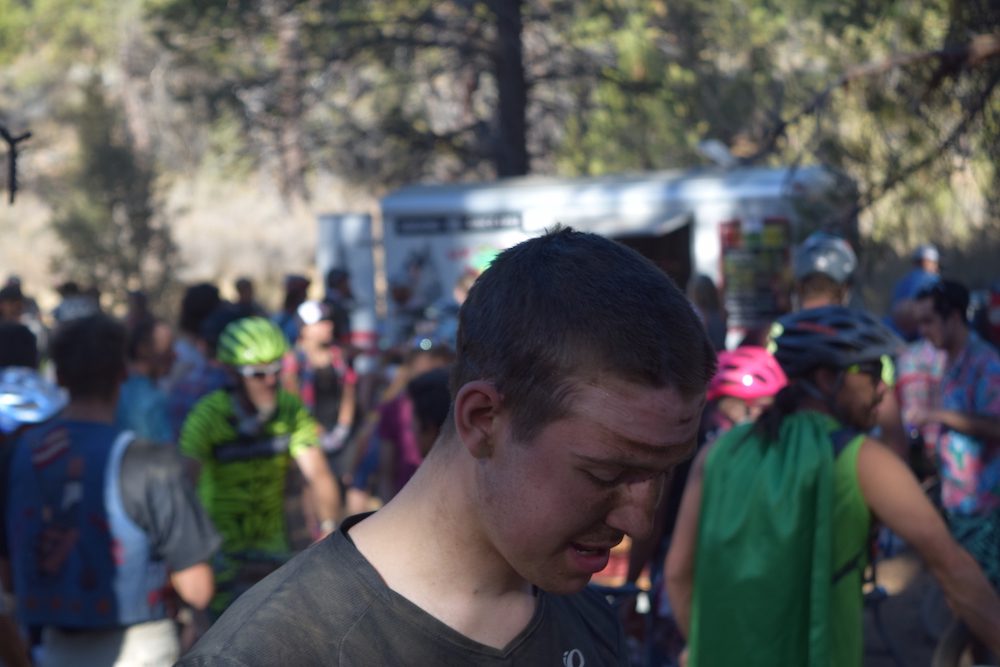 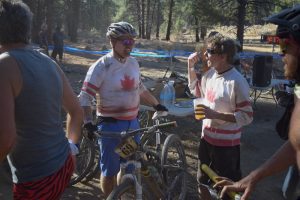 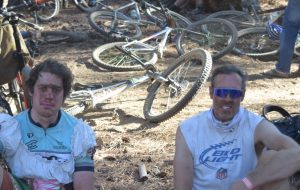 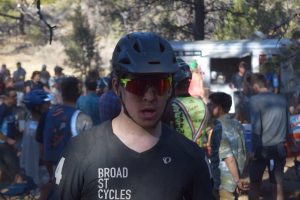 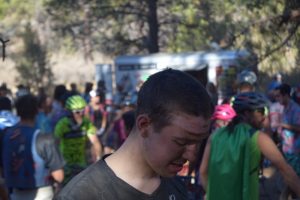 The course ended with one last climb as racers past the crowded finish area only to find one more climb before the finish. Once at the top, though, the effort was well rewarded. A ripping fast, technical descent through a river canyon, a rock tunnel, and wall ride straight to the finish area. There, beer, food, and other refreshments awaited as a massive crowd gathered to relax, share war stories and celebrate completing the massive course, armed with just a single gear. All that was left was to relax, and … oh yeah – a 6 mile ride back in to Bend from the finish area. 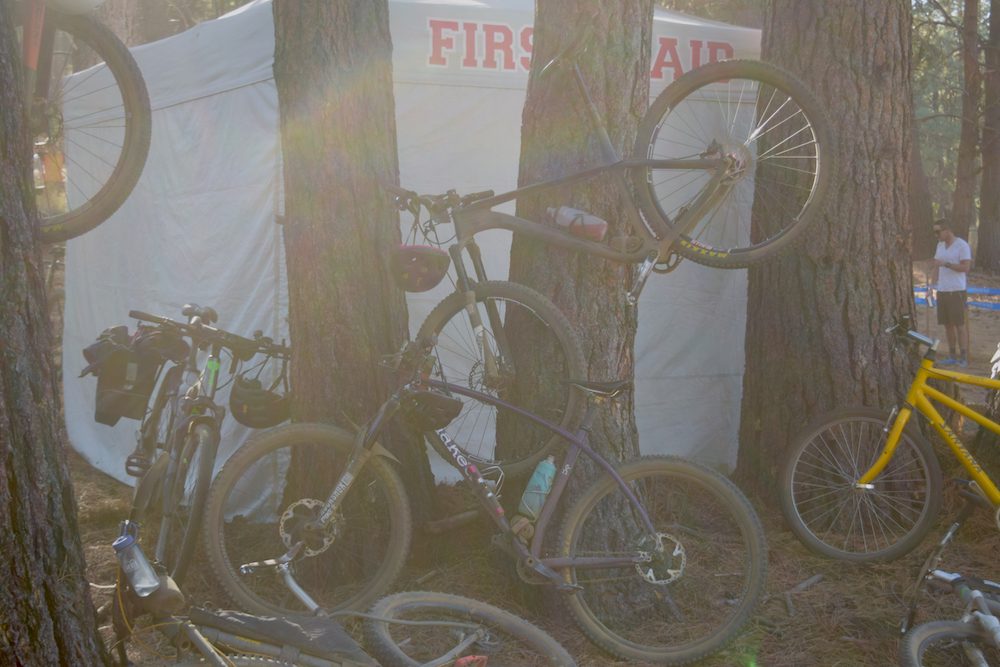