Structure Cycleworks’ dramatic reimagining of mountain bike design has been turning heads for years, even before the bike became a reality.

Now that the SCW1, the Calgary, Alberta-based brand’s first production bike is live and on the ground, there’s so much more to talk about than looks. I had the opportunity to meet with Loni Hull, Structure’s founder and CEO, in Nanaimo, B.C. to find out more about the linkage-driven mountain bike. I also had the chance to ride the SCW1 over several days. Part of that trip involved putting the SCW1 in a head to head test with three other top mountain bikes, to test Hull’s claim that his suspension design was not just fun to ride, but faster than traditional mountain bike design.

Structure Cyclework’s SCW1 live and in the woods

Structure Cyclework’s bike looks so different from a standard bike because Hull wants the bike to ride different, not because he wanted to attract attention. The WTF Linkage looks different because it works differently. Hull walked us through the how and why of Structure’s linkage last time. But what does the SCW1 feel like on the trail?

Well, it feels good. Look far enough down the trail that you don’t see the linkage and you quickly stop thinking about how the bike looks and start enjoying how it works. On larger impacts the linkage works as Hull describes, smoothing out big holes while staying composed and level. It doesn’t feel like it dives when you throw it into rough sections of trail, even with the smaller 27.5″ wheels.

Over small bumps, the SCW1 is incredibly smooth. This gives the Structure a feeling like it is stuck to the ground, lending the bike impressive traction through rooty corners. It was also really fast through smoother berms and jumps. Faster than any of the other bikes in the test, in fact, without ever feeling on the edge or out of control.

It was harder to find the balance for the rear end, though. I didn’t have as much time to try different suspension set-ups and the SCW1’s back end either felt a bit harsh or a bit soft, specifically on square-edge hits. I’m sure there’s a sweet spot there, but I didn’t have time to experiment too much. I don’t want to overstate this, though. The back end only feels rough compared to the SCW1’s very smooth front suspension. And, as you’ll see in the times below, it really didn’t hold the bike back at all when it came to going fast down the trail.

The only drawback to the complex looking linkage is that it limits how far you can rotate the bars. The upside is, as with Trek’s KnockBlock system, you won’t tear out brake lines in a crash. But, when you get to super tight, slow speed corners, there is a limit to how tight you can turn.

Structure Cycleworks vs. the world

Riding the SCW1 is exciting. Its unique approach to suspension is familiar-yet-different. It’s easy to get used to, and provides an answer to several complaints riders have about current suspension designs. Notably, suspension dive.

These traits also make Structure’s SCW1 quite fast. Hull designed it as an enduro race bike, and he’s confident that it can stand up against any other bike out there.

We brought three with us to Nanaimo to test the SCW1 out against the clock. Since most current enduro bikes are 29-ers, Hull was happy to compete against the wagon-wheelers in our test. While Structure is sticking with 27.5″ (for now),  the little wheels didn’t hold the bike back at all. 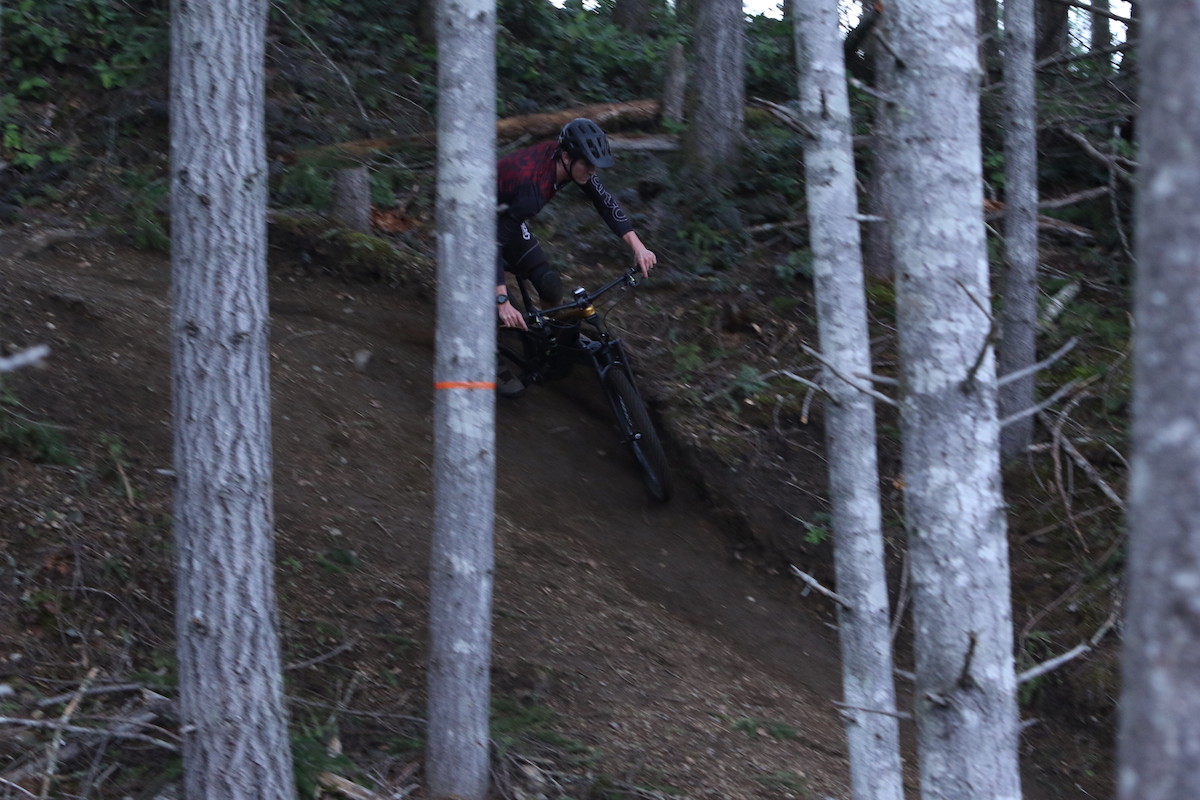 For our test, we had four bikes and a 2.5 kilometre track. To keep things as fair as possible we set the bikes up with the same tires. Maxxis Assegai’s up front and Minion DHR II’s on the back. Since Structure uses a different wheel size than the others, we had two sets of wheels. The Structure used Canadian-made We Are One wheels. The other three used Industry Nine wheels, both with the new Hydra hub.

After just over five minutes of racing, all four bikes were within ten seconds. Before we break that down into winners and losers, its impressive that the four are that close together after such a long track.

The top bike was the Ibis Ripmo at 5:17, with the Structure trailing just one second behind. For Structure, having its first bike basically match pace with one of the faster bikes out there should be considered a big win. It wasn’t the fastest but, up against brands with decades of experience, it was faster than most. This was also definitely a track that suits 29-ers, rewarding a bike that can maintain speed over long sections of twisting, rough trail. 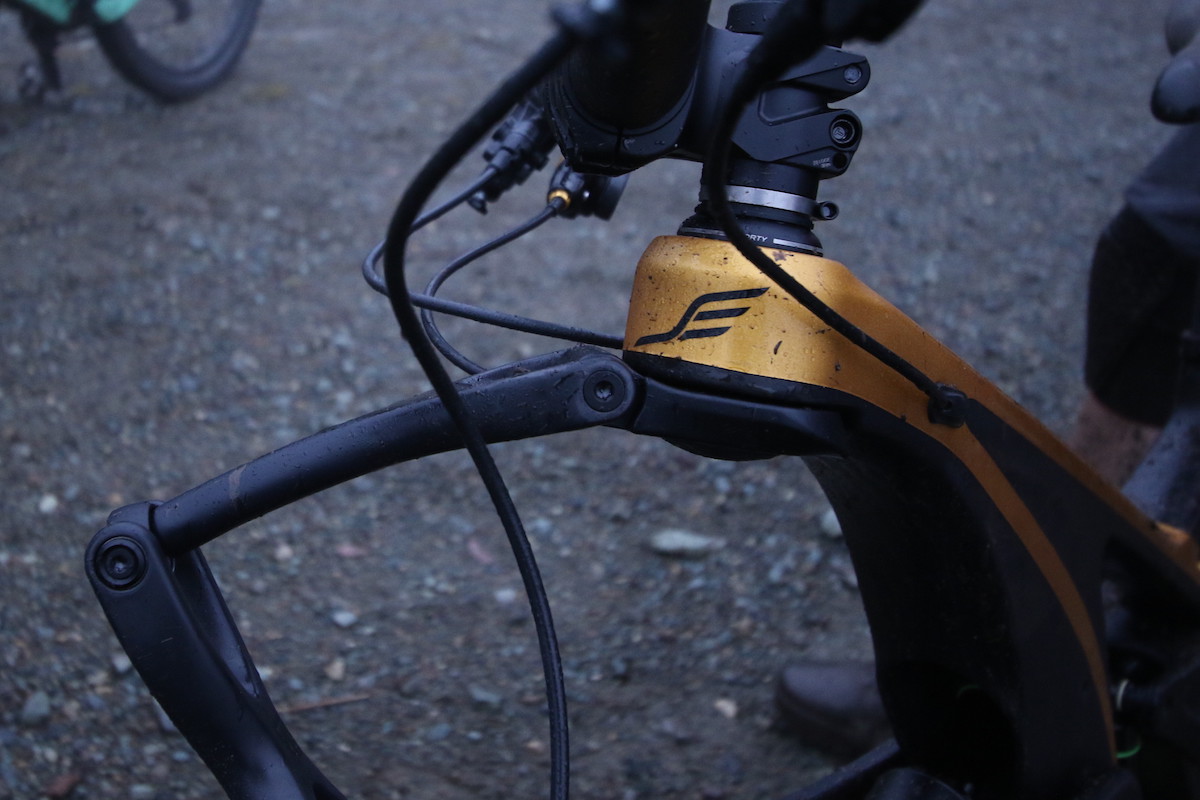 What did we learn from this test? The results show that Structure Cycleworks’ linkage driven design isn’t just an interesting concept. The bike is right up there, or faster, in terms of performance with bikes from very established brands. And Structure still has room to grow. Hull is already talking about taking the design to 29″ wheels, which should only make the bike faster. As is, it’s an option for fans of 27.5″ wheels that want a bike on pace with the wagon wheels.

More interesting than just raw time is that Structure achieves this performance through a very different approach to design. The SCW1 is more than a first effort. It is already a fully formed product that competes with established brands. Its ability to do so firmly kicks open a new path for suspension design, too. Like any other, more traditional design, the linkage fork will improve in subsequent generations. With Structure pushing into uncharted waters, though, it will be really exciting to see how far this design can go.

We’d like to extend an extra thank you to Maxxis for the matching tires, helping make the test more fair. Coal City Cycles in Nanaimo were also exceptionally helpful while we were in town.