When Trek introduced out the SuperCaliber it rolled, shrouded in mystery, directly onto World Cup tracks. It was – and is – a pure cross country race bike. It was not expected that the XC platform’s next iteration would be electric. Trek sees things differently, introducing the E-Caliber aimed directly at establishing the high-end, lightweight e-XC category.

So what better bike to build an e-cross country platform out of than Trek’s flagship XCO race bike, the Supercaliber?

Trek bills the E-Caliber as an equalizer, not an all-day adventurer. It’s designed to get you out on trails and keep you on par with your riding friends, while delivering a similar ride experience to their cross country bikes. Sticking to this purpose let Trek get creative with the design process to deliver a lighter, more natural-feeling eMTB.

Trek E-Caliber by the numbers

Just like the SuperCaliber, Trek’s E-Caliber uses the novel IsoStrut to deliver 60 mm of rear-wheel travel. While the bike looks similar in profile to its whippet race bike sibling, there are some differences. The wide flat flex stays found on the analogue bike function the same, but Trek redesigned the whole back end for the electric platform. IsoStrut still provides a firm, supportive pedalling platform. The proprietary shock is tuneable, via included air volume spacers, to make it more or less progressive.

Up front, the Supercaliber’s 100-mm travel fork is upped to 120 mm. The reach also grows by about 15 mm, which Trek says is to balance the added weight of the drive system at higher speeds. Last, the E-Caliber is 1.5-degrees slacker at the head tube, though it’s still a sporty 67.5-degrees. There’s tire clearance for 2.4″ rubber on all sizes.

For a comparatively reasonable $8,700.00, the E-Caliber 9.6 comes with the same carbon fibre frame, and more reasonable parts build. It still weighs just 18.48 kg (40.75 lbs), lighter than most other full-suspension eMTBs currently available. 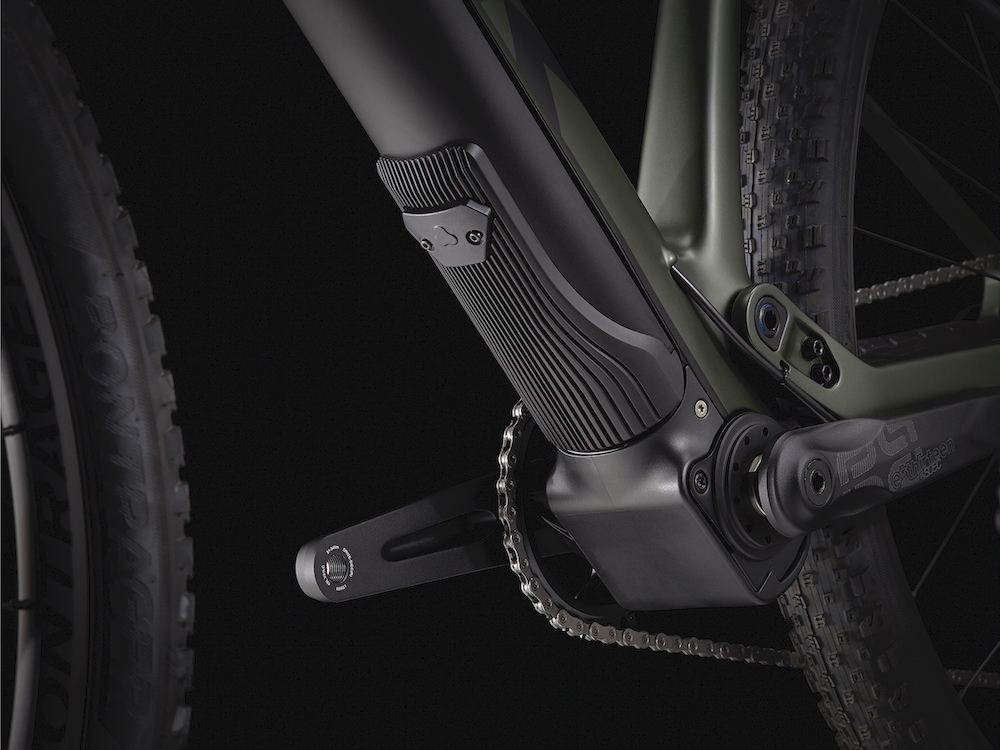 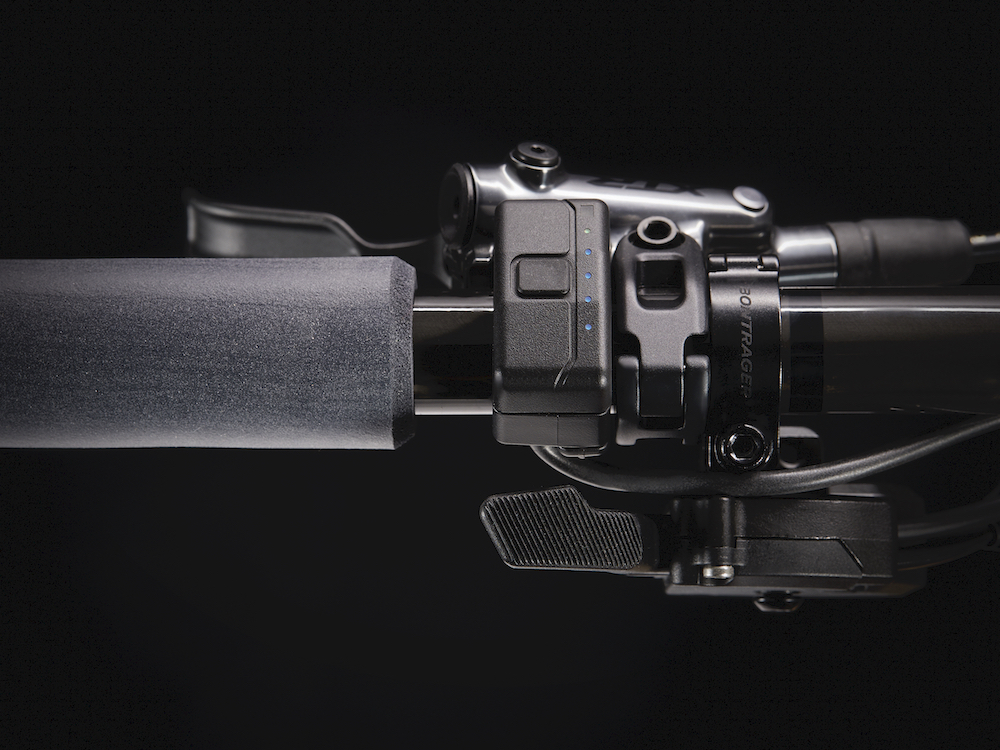 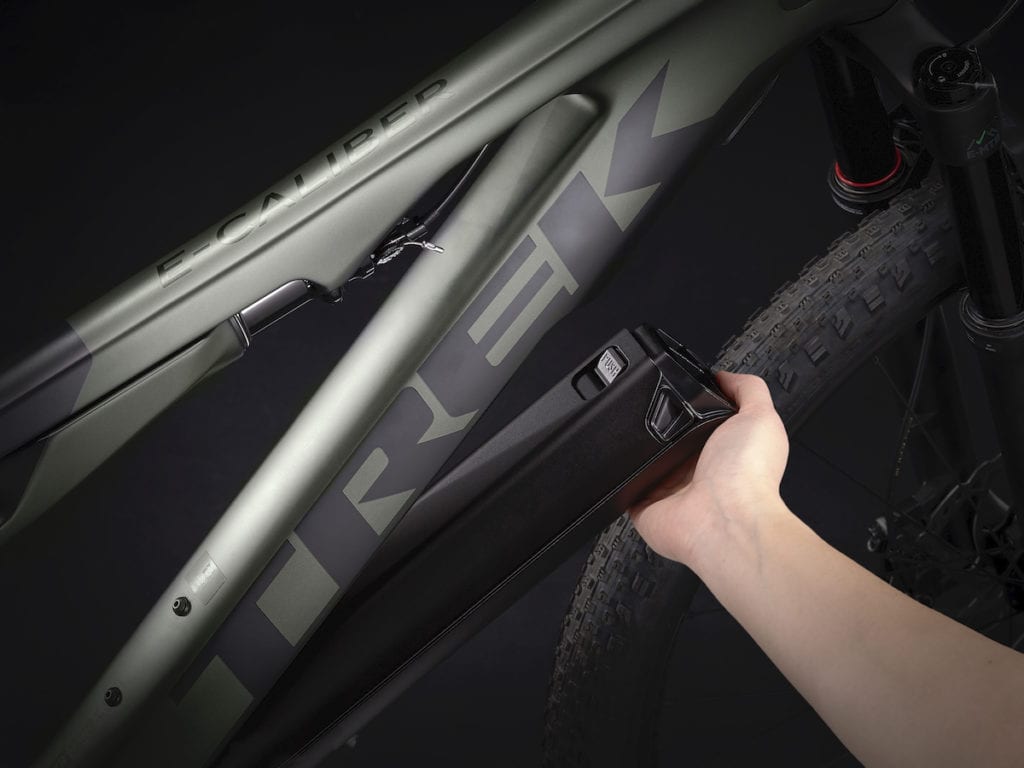 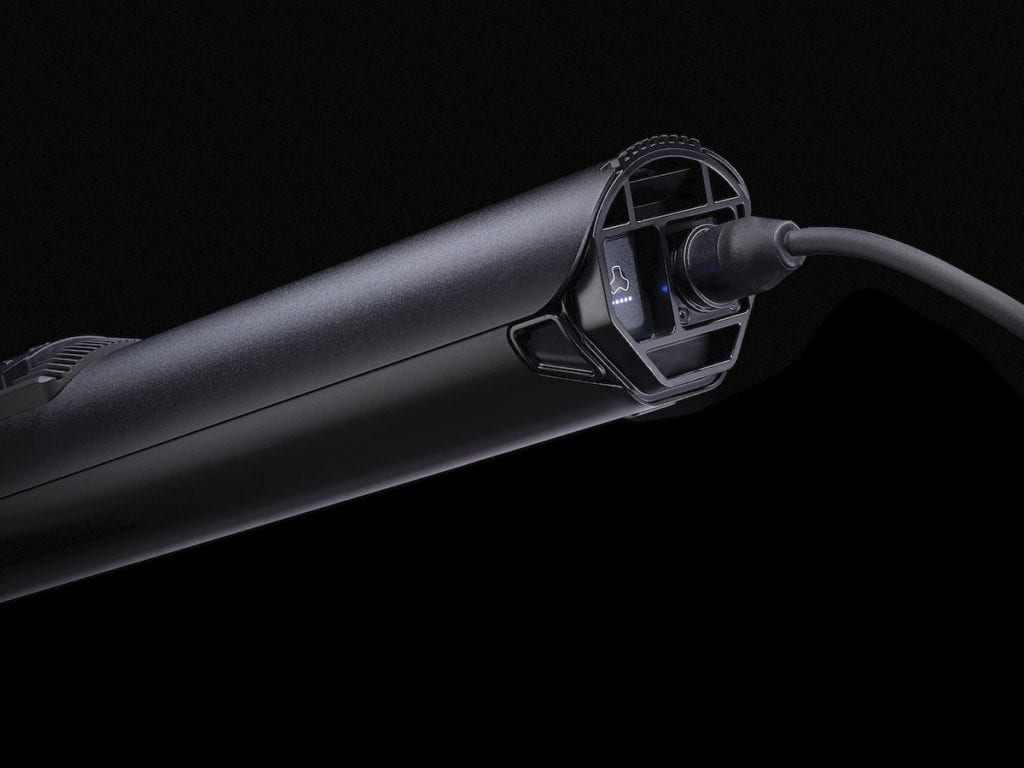 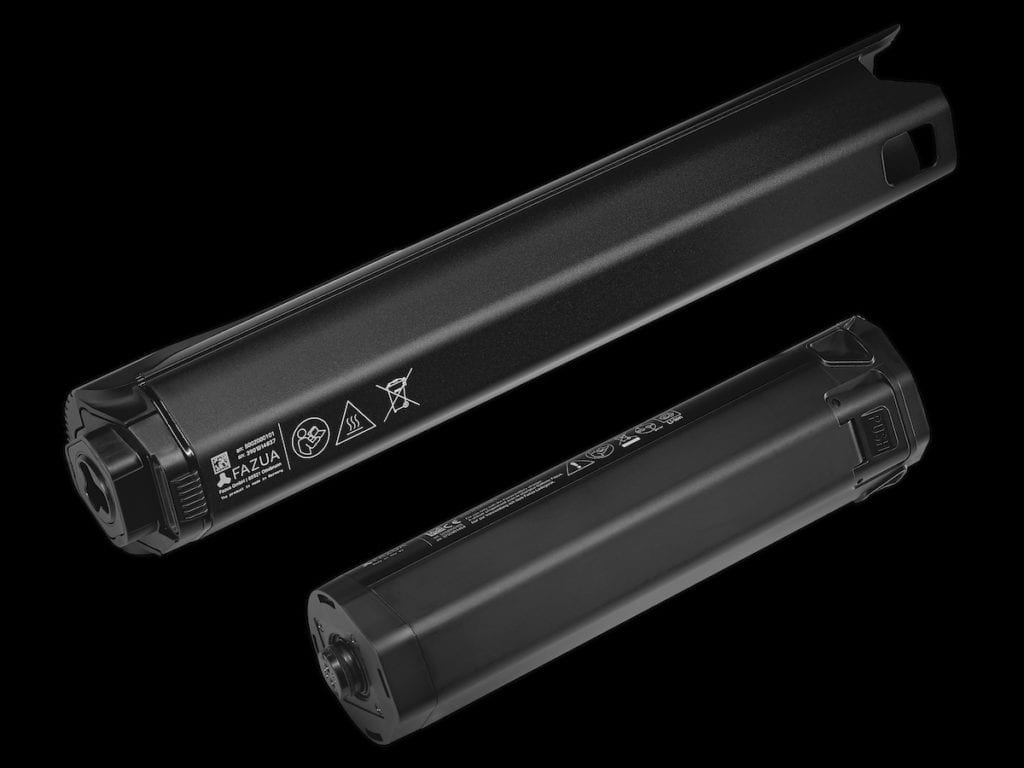 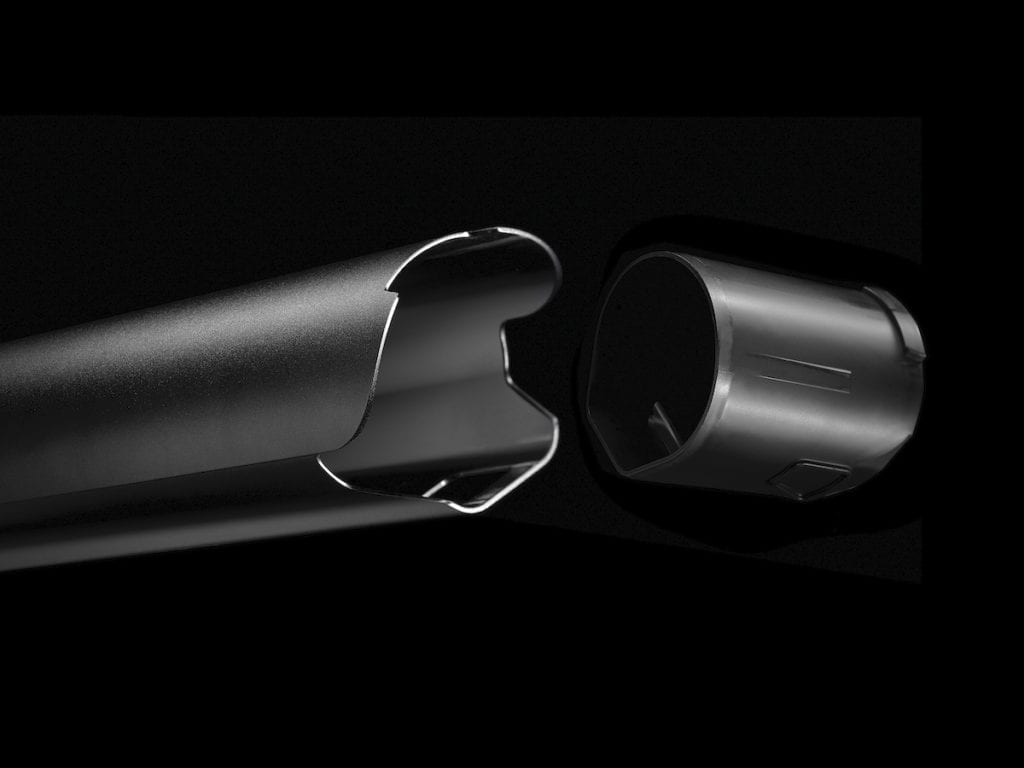 A storage compartment is included to replace the Fazua system when riding entirely under your own steam. 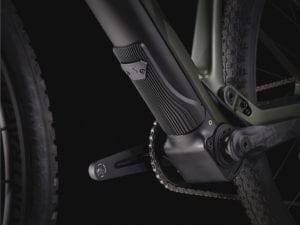 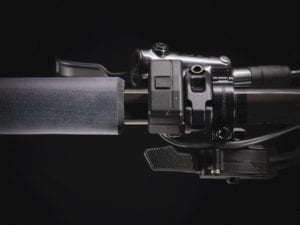 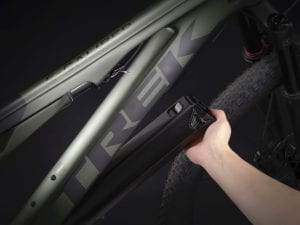 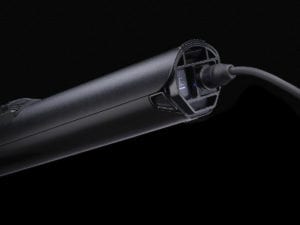 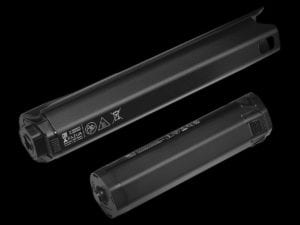 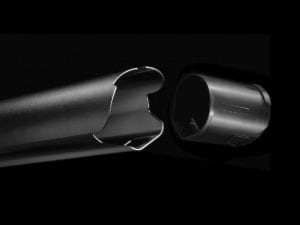 Powered by you and the Fazua Evation

A major reason Trek can keep the E-Caliber’s weight so low is its Fazua Evation motor. Consistent with Trek’s “equalizer” design principle, the Evation uses a smaller motor and smaller battery to deliver a natural feeling boost, not overpowering push.

The Evation delivers 55 Nm of torque, via a 250-Wh 36-V battery pack. Both the drive pack (250 W, with 450-W peak) and battery pack are, as mentioned, removable. Fazua’s motor claims to have next to zero drag when not engaged, making the E-Caliber functional as a normal pedal bike. With drive and battery packs removed, the extra frame space can even be used as a storage compartment.

At the opposite end, the Evation’s small, 1.38-kg battery pack is light enough that you can carry an extra in a backpack if you’re planning a bigger adventure.

At factory settings, these deliver 100-W, 210-W and a max-setting 250-W support. Fazua’s dedicated smartphone app lets riders customize the level, and feel of this support. The app can set the motor to engage faster or to provide more gradual levels of support up to max, among other features.

And, since this is an XC bike, Bluetooth connectivity means you can display all of this info on your bike computer or phone. There even a Fazua Garmin widget in the works.

Last, the Fazua Evation works as a built-in power meter. Connected to a Bluetooth device, it will display rider input in watts, like a standard power meter. This makes the E-Caliber an ideal bike for training for riders returning from injury, or just needing an easier day in the saddle.

While the “lightest ever” full-suspension eMTB 9.9 XX1 AXS tops the E-Caliber line, Trek starts the new bike line off with the 9.6. With a carbon fibre frame, RockShox 35 Gold fork, Shimano 12-speed drivetrain and four-piston brakes, it’s a solid start. Unlike the 9.9 AXS, the 9.6 even comes with a dropper seatpost. It also retails for $8,700.00, instead of nearly twice that. 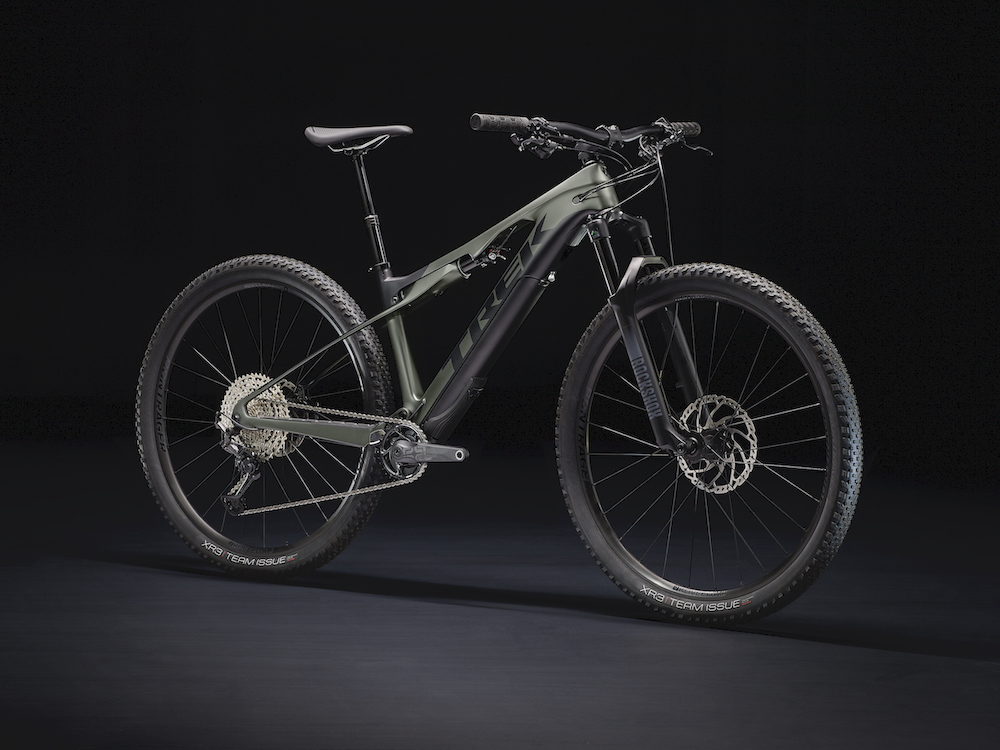 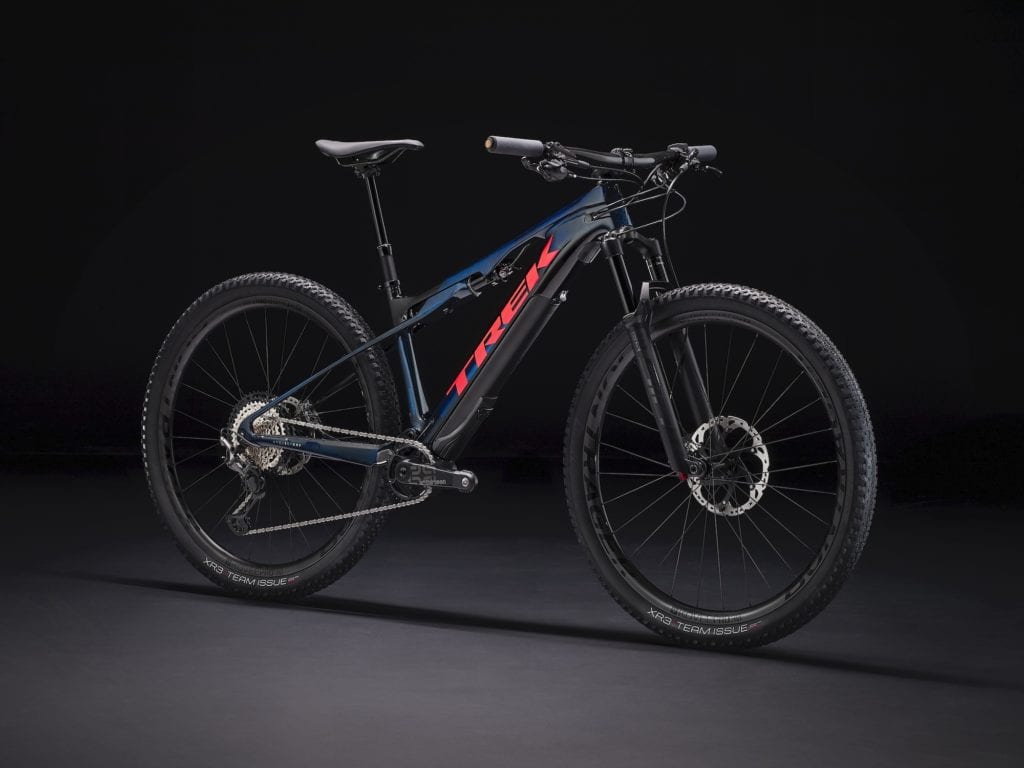 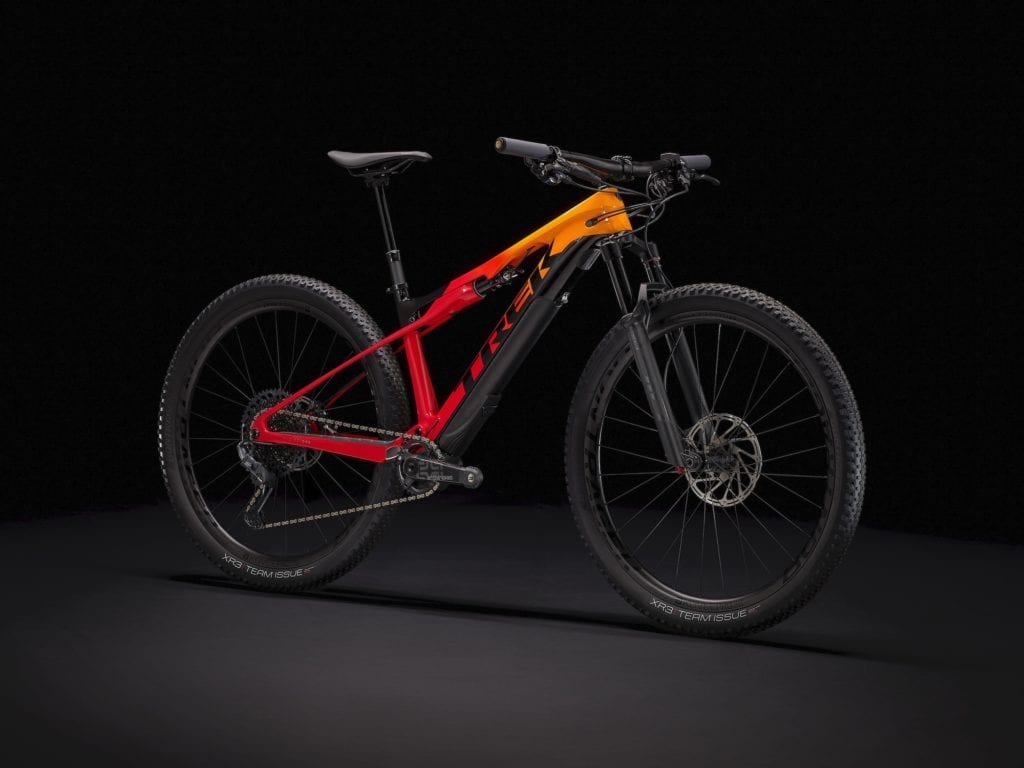 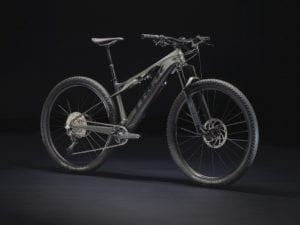 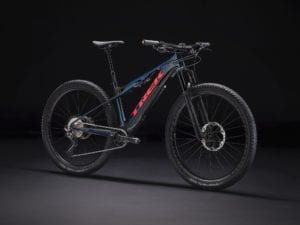 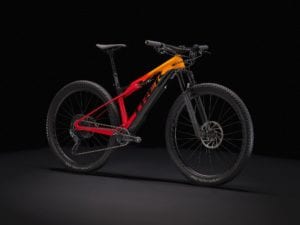 From the 9.6, the E-Caliber line moves up to the 9.8 GX and 9.8 XT. Both retail for $11,150.00, leaving riders to choose between SRAM GX drivetrain and G2 RSC brakes or Shimano XT 12-speed and four-piston brakes. Both come with Kovee Pro carbon fibre wheels, RockShox SID 120-mm fork and a dropper seatpost. 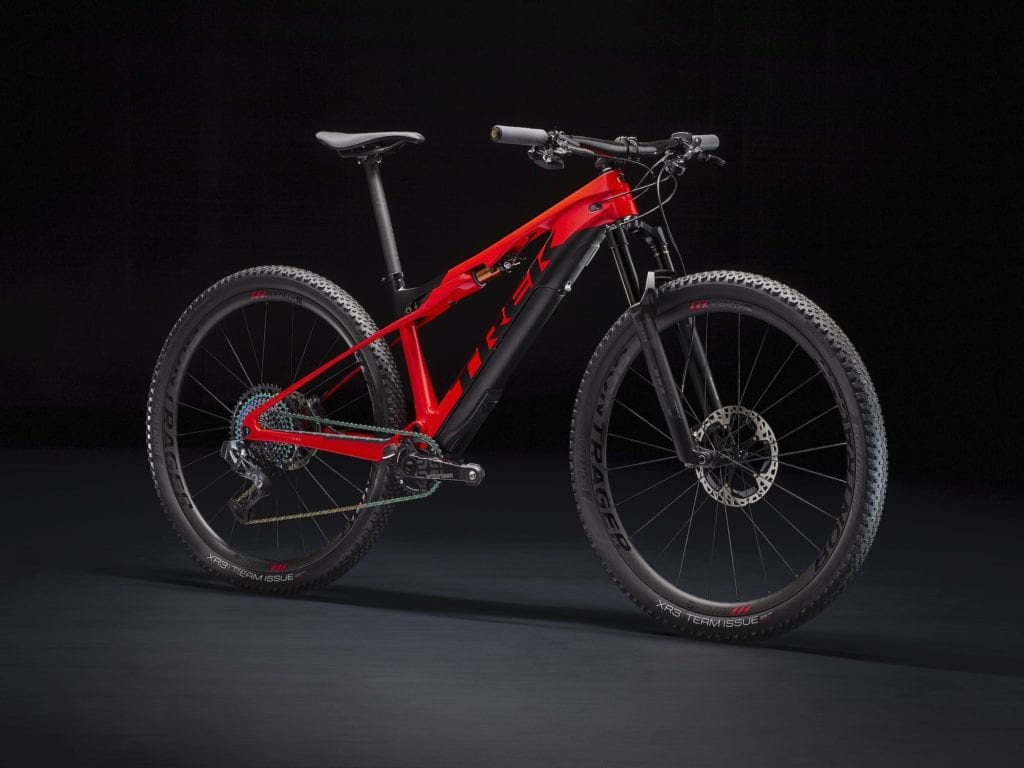 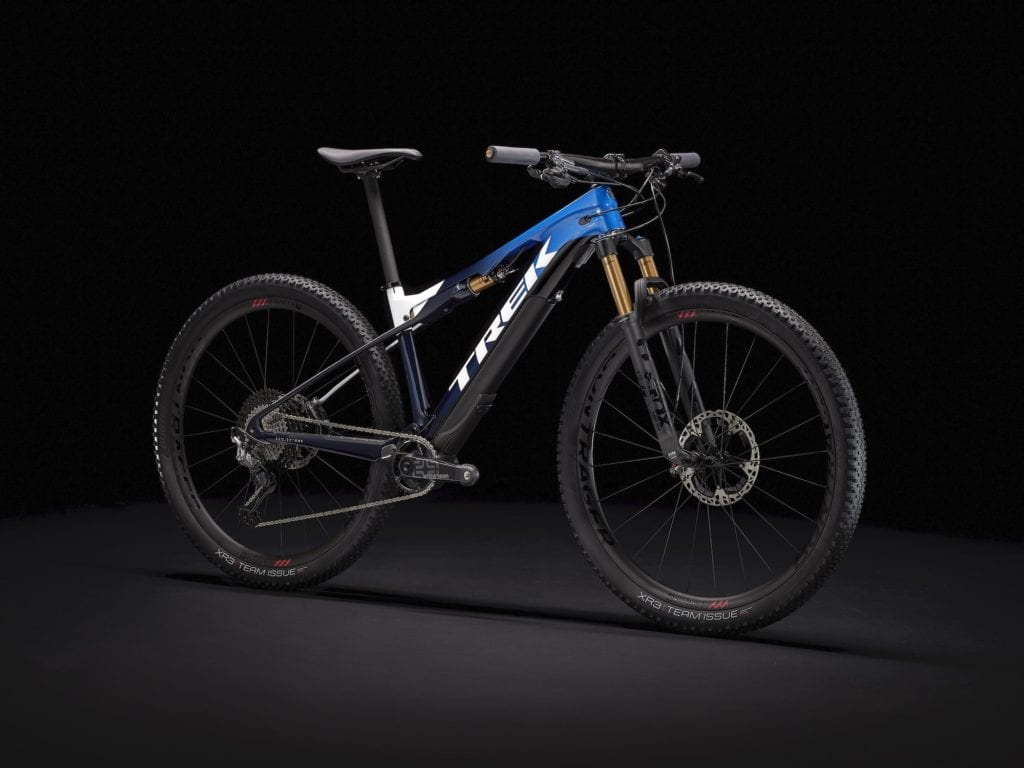 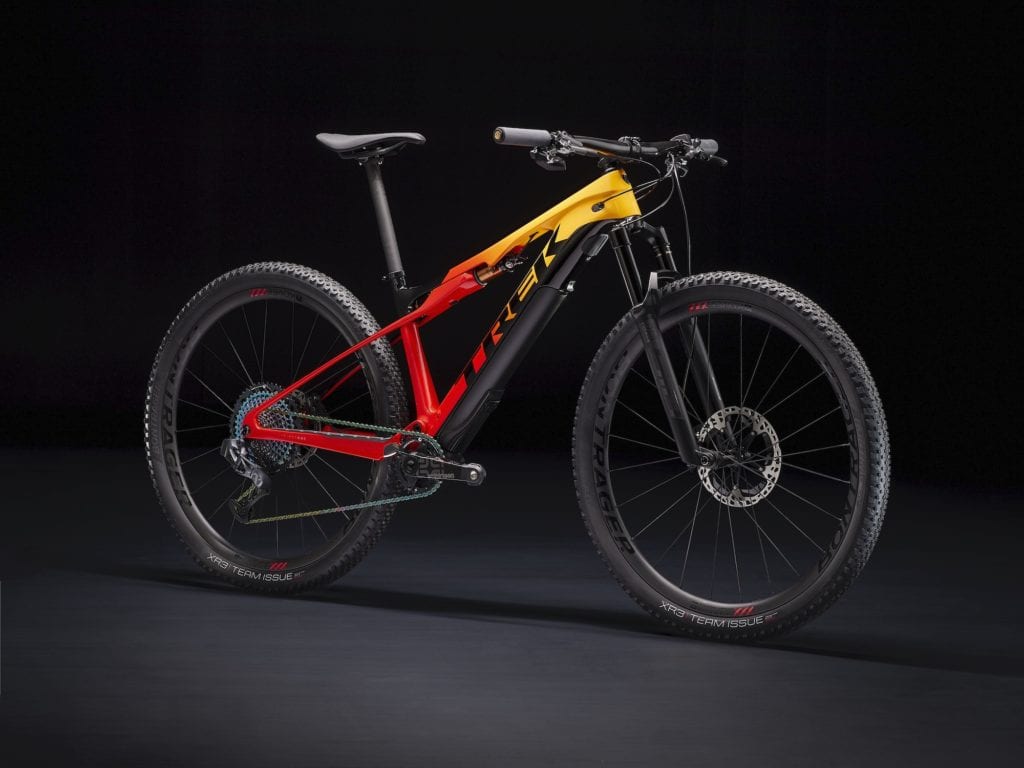 And another, brighter colour option for the 9.9 XX1 AXS build 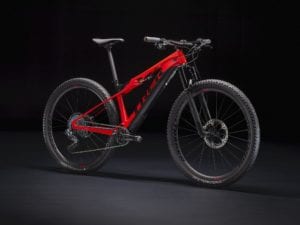 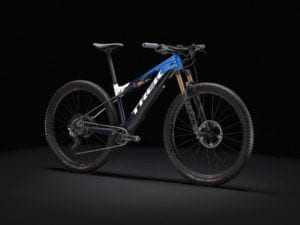 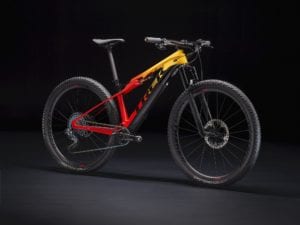