Yesterday, Norco revealed the stunning green-gold maple leaf  custom painted bikes that Haley Smith and Peter Disera will race at the Olympics in Tokyo. The intricate design, made using real maple leaves, was created by Toronto’s Vélocolour. Suzanne Carlsen of Vélocolour shed some light on how the design was created and how the project came together.

The final design that you see on the bikes is a combination of Norco’s create team, with the initial idea, and Vélocolour’s years of experience with custom paint.

“The original idea that they presented was taking the texture of the leaf, blowing it up in scale and having that all over the bike,” says Carlsen. “It was cool, quite abstract and nearly impossible to do in paint,” she adds with a laugh.

Most custom graphics places print vinyl that they wrap around frames to transfer a design to the bike. Vélocolour does all its work by hand, in paint, in house. That required a different approach.

“Elodie, our head painter, suggested that we could take actual maple leaves, spray them, and then press the texture into the bike,” Carlsen shared. From there, the crew had to figure out how that would work. And find the right leaves. In typical Vélocolour fashion, this involved an impressive commitment to detail. “I tested the type of maple leaf, what was the minimum and maximum sizes we could work with and what colour worked the best, should we brush the colour or spray the colours.”

For the colour, Vélocolour used a colour shift pearl, something no other Revolver will see. The bikes will appear green or gold, depending on what angle you’re looking from. 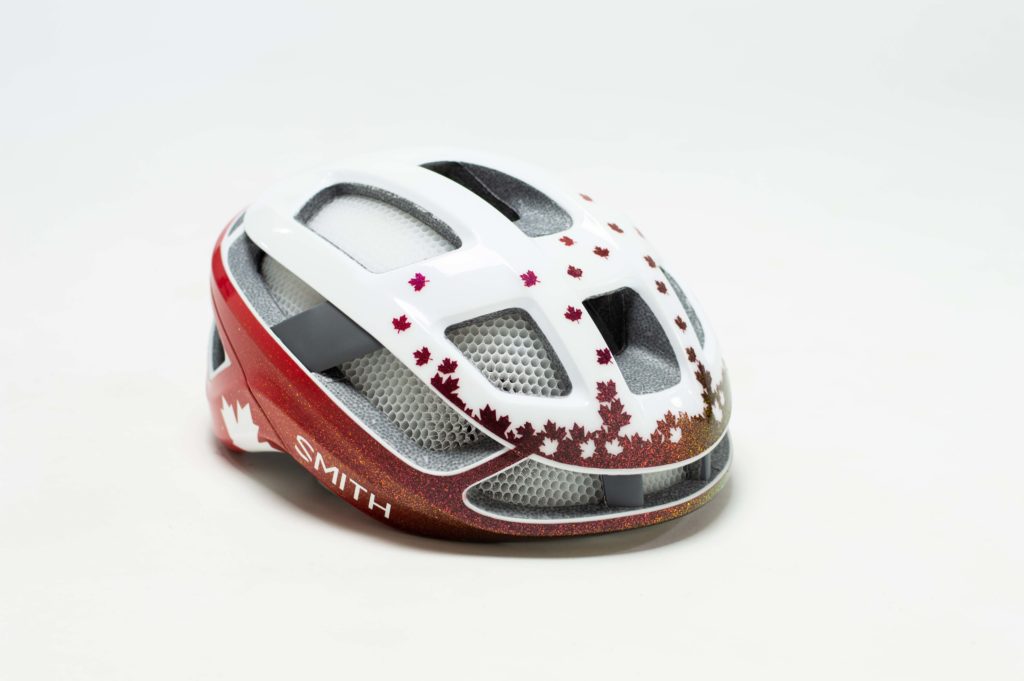 Smith helmets, but make them CanadaPhoto by Nick Iwanyshyn 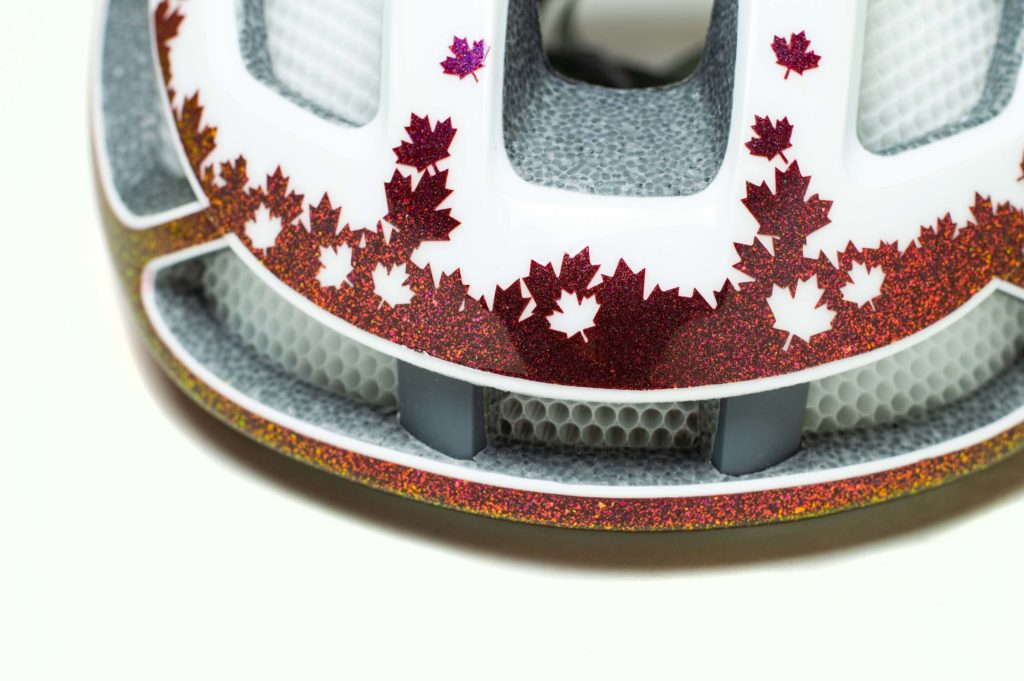 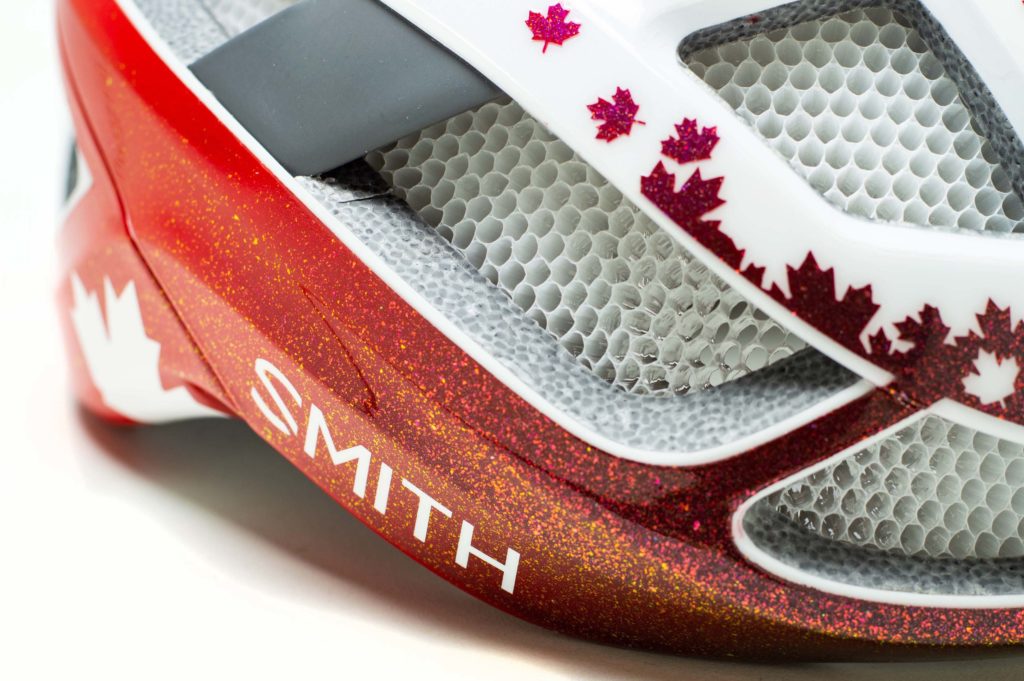 And a red-red fade. Photo by Nick Iwanyshyn 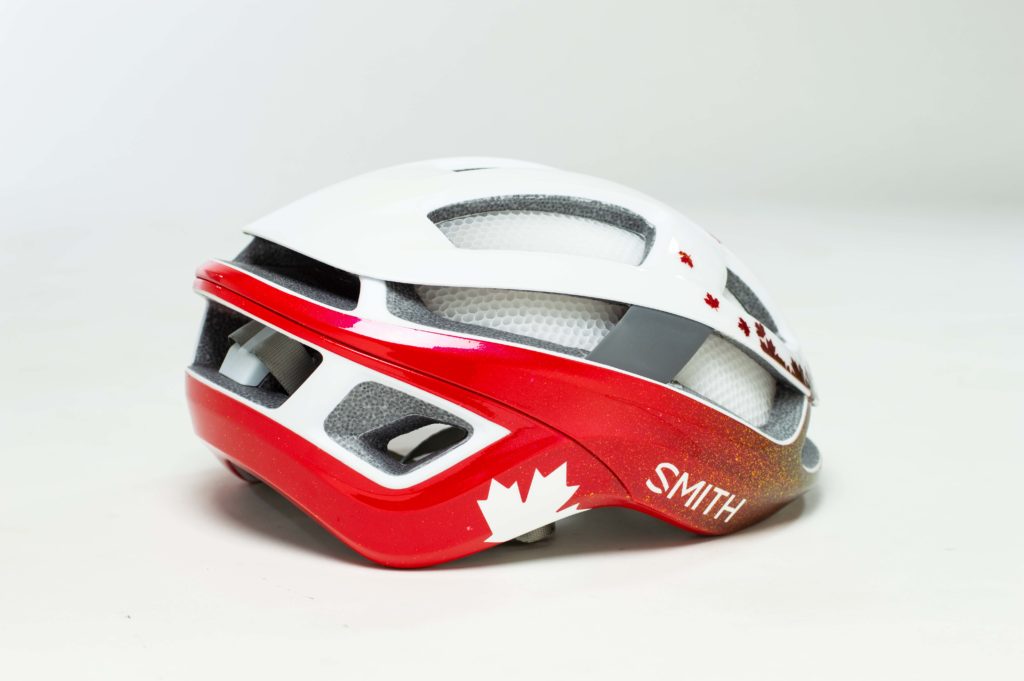 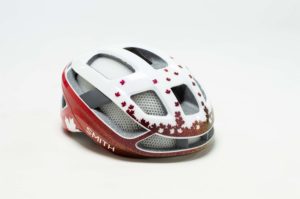 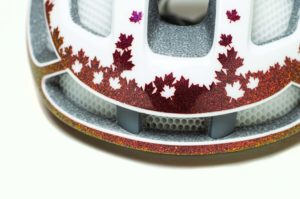 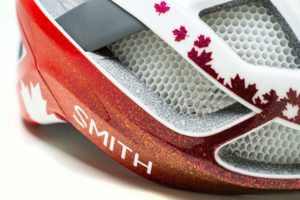 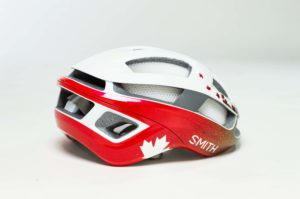 “Smith was great,” says Carlsen. “They pretty much said ‘make them look awesome, stand out, very Canadian, and match the team kit.'” With free reign creatively, the team put a custom spin on the classic look. “We did a maple leaf fade in a heavy sparkle. It doesn’t get much more celebratory Canadian than that.”

RELATED: Tokyo Olympics: Peter Disera is ready for his debut in Japan

Custom work at this detail takes time. With Olympic selection for Canada’s mountain bike team coming less than a month before the Games start in Tokyo, the six bikes and two helmets was a major project.

“The timelines for these were tight and we really pushed, putting in long hours for about a week straight,” says Carlsen. “We normally do about two to three bikes a week. With this project we had to do six bikes and two helmets in about eight days.

The results are incredible. They’re also more meaningful than a standard custom paint job, for a few reasons, which makes the extra hours worthwhile.

“One of the main reasons why we decided to take this project on with such short notice is because of Haley,” Carlsen explained. “In a sport and industry so dominated by men, myself and our head painter, who is also a woman, were pretty stoked to be paining Haley’s bike and helmet. We are definitely seeing a shift in the industry, which is good. But still, 98 per cent of our customers are men. So to think of an Olympic project done for a woman by women to me is pretty exciting!
RELATED: Tokyo Olympics: Haley Smith is focused on the path forward
Haley Smith races in Tokyo on Tuesday, July 27 (that’s late Monday night, for anyone on the west coast). Peter Disera races a day earlier, on Monday, July 26.