Canada’s far north is not the first place on many riders list of riding destinations, but hidden between the glaciers high in the arctic circle are big mountain lines that dreams are made of. Explore a part of Canada few have visited, and even fewer ridden in North of Nightfall, screening at Cineplex theaters for one night only on Friday, June 1.

Over the course of two years Darren Berrecloth and Cam Zink researched and scouted out locations on the remote Axle Heiberg Island, which remains frozen most of the year and completely shrouded in darkness for four months each winter, looking to take freeride mountain biking to new heights. The result is North of Nightfall, a 66 minute film following Berrecloth, Zink, Carson Storch and Tom van Steenbergen as they ride big mountain lines on the remote Arctic island.

Riding high consequence lines gets heavy when the closest hospital is a 10 hour flight away in Iqaluit, and you still have to wait for the plane to get to you before that clock starts. Add in the massive scale and unknown dirt, and North of Nightfall brings mountain biking into the realm of big mountain ski expeditions, just with more rocks.

More than your average shred fest, North of Nightfall brings you into the preparation, physically and mentally, and emotional investment the riders – and their families – put into such a remote expedition into the relative unknown. Pushing the boundaries of mountain biking isn’t easy, and the film doesn’t pretend it was all easy going.

It is still a mountain bike movie, though, so there is plenty of incredible riding mixed in from these four talented athletes representing two generations of freeride mountain bikinging. Along with the stunning backdrop of Axel Heiberg Island, viewers get to visit the crew at Darren Berrecloth’s Vancouver Island home as they ride his private trails in preparation for the expedition.

Your chance to watch these four pro freeriders explore this northern Nunavut island arrives June 1st, when North of Nunavut plays for one night only at Cineplex theaters across Canada. Tickets for this screening must be reserved by May 25th.

North of Nightfall – All screenings Friday, June 1 at 7:00 pm (tickets must be reserved by May 25) 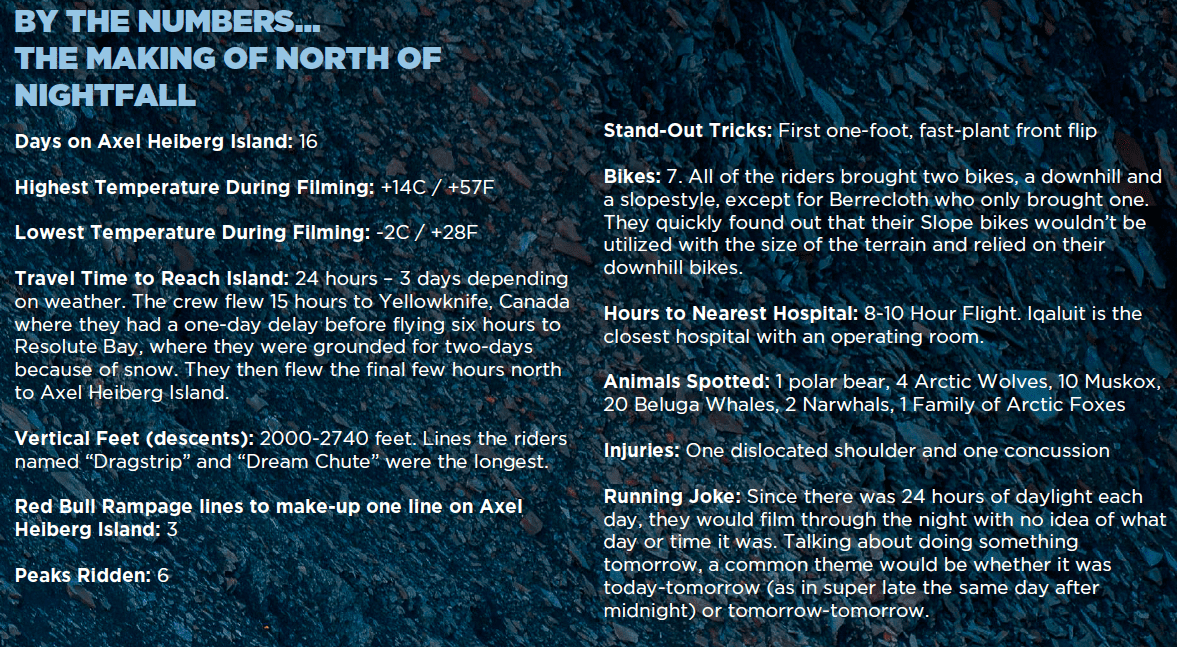