When Cycling Canada announced its team for 2021 mountain bike world championships there was a mix of excitement and confusion. Seeing 51 riders headed overseas to compete at worlds is a great sign for the future of Canada’s racing program. It’s decidedly less positive that there are zero elite DH women headed to Italy.

So, what happened? Why are there no elite downhill women selected for Canada?

Before we launch into the issues, I do want to take a moment to point out that there are some positive takeaways from the team announcement. There are three junior women heading to Val di Sole, up from zero in 2020. There is also a full team of seven junior men on the rider list. Cycling Canada is also increasing its support of downhill at world championships compared to the last several years. A coach, Claire Bouchar, and downhill team manager, Adam Walker, are travelling to Italy with the team.

This is a change in policy and funding compared to previous years.”Cycling Canada recognizes that a healthy cycling nation offers support to athletes in all disciplines, but our public sector funding partners only allow us to use their funds for the Olympic/Paralympic disciplines,” says Kris Westwood, Cycling Canda’s High-Performance Director. “In response, as part of the 10-year strategic plan announced earlier this year, we have been working to raise funds from other sources. The support for this year’s DH worlds is the outcome of those efforts, and we expect it to increase over time.”

It is also important to note that the cross country and downhill teams are subject to different selection criteria and and decisions are made by different people Downhill selection is done by a DH working group established by Cycling Canada. 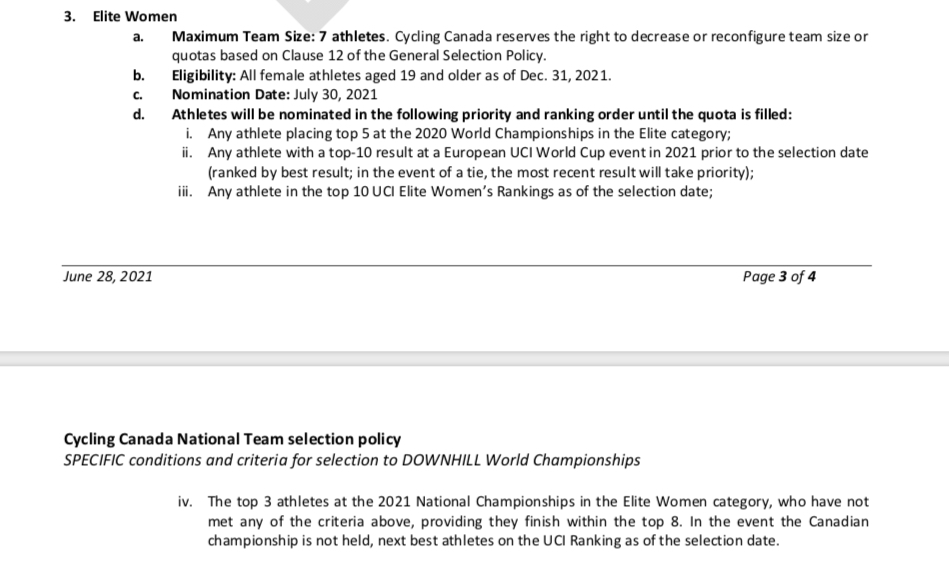 What happened? A closer look at Cycling Canada’s selection policy

So, why are there no elite women on the team? Three women were selected for the team based on their results at Canadian downhill national championships, but all declined to travel to world championships, according to Cycling Canada’s team announcement.

But that doesn’t mean there are no women capable or available to compete. Rachel Pageau, for instance, is already in Europe where she’s working into the second half of her World Cup season. I reached out to Cycling Canada to find out why only three riders were selected. For context, The UCI gives Cycling Canada has the option to enter up to seven elite women in the downhill race at world championships.

“For both Elite Women and Elite Men, the selection criteria is very clear, with selection based on 2020 World Championships results, 2021 World Cups, UCI ranking and Nationals. All athletes had the same opportunities to enter races in 2021 and achieve results for selection. After that, we were left with selecting the top three athletes at nationals. The criteria clearly state we only select the top three who are not already selected; if those athletes decline, there is no provision to roll down the results list to pick additional athletes.”

So the selection policy was followed. By why, especially following a year like 2020, were some riders were at a significant disadvantage, adjust the policy? Why not extend the invitation to lower ranked athletes? Again, Kris Westwood:

“For athletes competing in the elite category, the primary objective of the selection process is to choose athletes with the highest potential to perform at the 2021 Mountain Bike World Championships, the objective is not to fill all of the quota spots.”

But that’s not the whole story. There’s another layer of confusion to sort through.

This selection guide was publicly available before Canadian national championships took place. So, what’s the issue?

At least one athlete, Vaea Verbeeck, reached out to Cycling Canada ahead of racing at KMHR to clarify the selection policy. Knowing she would not be able to compete at worlds if selected, Verbeeck e-mailed Cycling Canada specifically to ask whether, should selected athletes decline spots, selection would roll down the list.

In its response, says Verbeeck, Cycling Canada “said that I ‘would not be taking somen’s spot, we would simply ask the next person in the results and will keep going down the list as long as they finished within the top 8.”

This is likely a simple misunderstanding on the part of Cycling Canada, but that’s not the end of the matter. Had the policy been stated clearly, Verbeeck would possibly not have competed. As it was, she finished fourth, one spot out of qualifying.

That doesn’t erase the problem with Cycling Canada’s selection policy. It forces athletes into a position where they are choosing  between racing events or purposely avoiding events that will count towards selection for other athletes.

Many of Canada’s top women race mixed calendars – appearing in freeride events, Enduro World Series races and Cranworx World Tour. They do so successfully, and are among the best in the world. Casey Brown for instance, won nationals. She is also hosting her first women’s freeride festival “Dark Horse” in B.C. in the days before worlds. Verbeeck has worn the maple leaf at Crankworx events, even earning the prestigious Queen of Crankworx title in 2019.

Cycling Canada’s selection document potentially forces them to avoid events that they would otherwise attend. This is bad for racing in Canada. It’s also potentially bad for athletes, whose sponsors might want them to appear at one event, like nationals, even if their calendar won’t let them race worlds.

The policy is definitely bad for athletes, like Rachel Pageau, who are trying to break into racing. They lose race experience, which is important. They lose a chance to attract attention from sponsors (which is necessary, since Cycling Canada doesn’t fund downhill outside of what limited support they provide at world championships). They also loose a chance to represent their country overseas.

That’s not something lost on – or new to – Verbeeck.

Why is this important?

In fact, knowing her competition could impact other athletes is exactly why Verbeeck reached out ahead of Kicking Horse. It’s a situation the Canadian, who now counts Queen of Crankworx among her accomplishments along with her DH national titles – is familiar with. She faced the same barriers as an aspiring downhill racer.

“All I know is that I would’ve had a better chance at a downhill racing career had I not gotten closed doors from Cycling Canada so many times myself. All I needed was to be allowed to race. Instead it feels hard. It makes athletes want to stop, and many talented riders did,” says Verbeeck.

“I am still a full time professional mountain bike athlete and doing well for myself. One can only wonder what could’ve been if I hadn’t dealt with the hurdles from Cycling Canada. Seeing riders struggling with the same problems now and leading them the same way as me makes me sad and I want to see change.”

With 2021 worlds happening so soon, it might be too late for Cycling Canada to correct course this year. But changing the selection policy is easy. It’s written by Cycling Canada.

There is no shortage of current and promising downhill racers in Canada. Getting to race is an important part of their development. Especially since, with no under-23 category in downhill, athletes graduate to the elite ranks at the young age of 19. Cycling Canada may be focused on medals this year, but supporting new elites as they develop in that category is part of ensuring there’s more medals coming in the future.